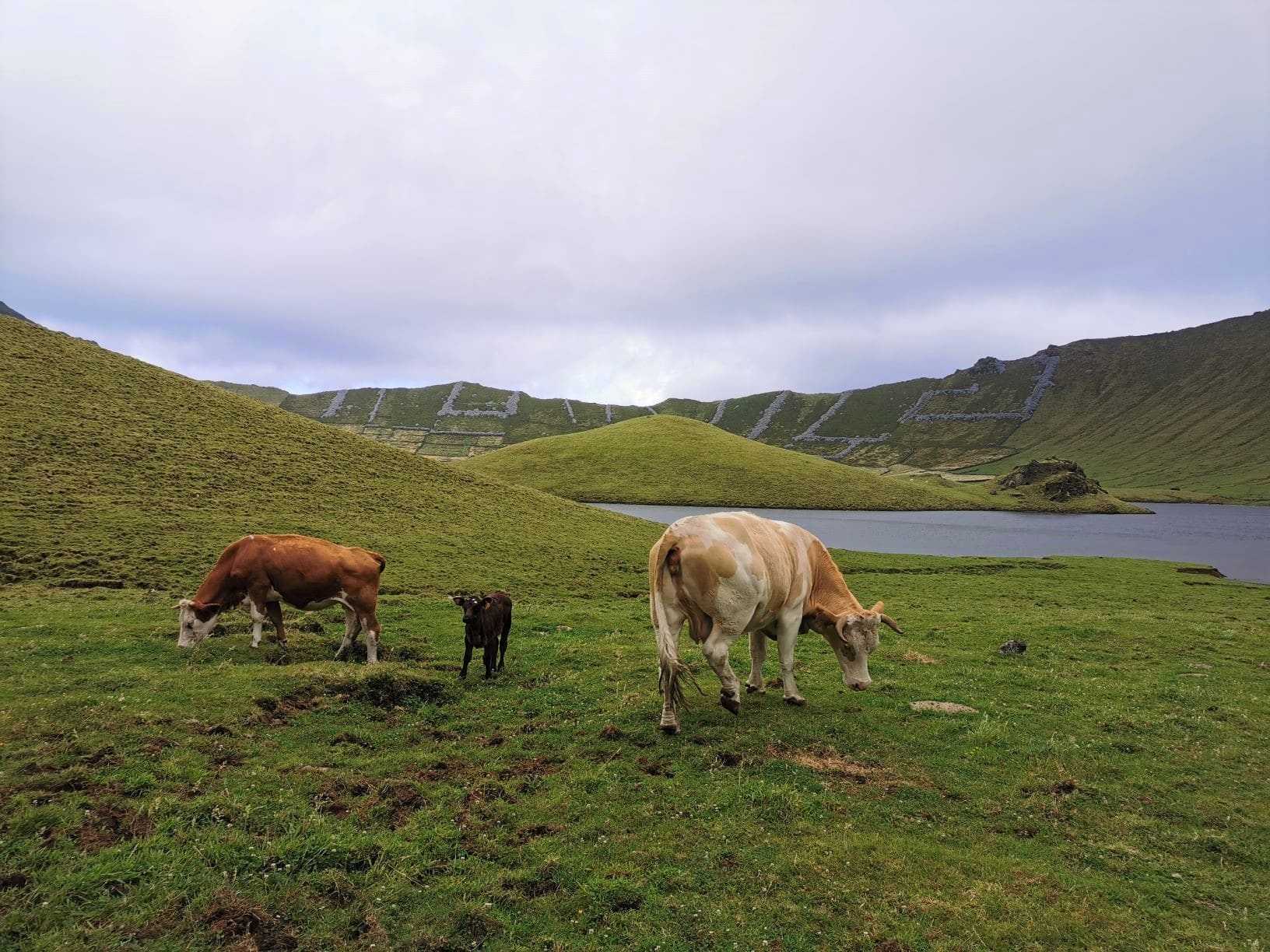 Corvo: islands of cows on the Azores

There’s the Planet of the Apes. And the Gorillas in the Mist. And there’s Dogs and Cats. Not to mention the lion’s land. Then why can’t cows have an island? Although no movie has yet been made with them, cows have quietly taken over Corvo island from people. The smallest of the Azores now has more cows than humans. The mini-island, which has an area of only 17 km2, is inhabited by 400 people only. Each resident person has been given a cow as a gift said by our local guide. And given the proliferate, I have a strong suspicion that cows are more fertile than humans. After this theoretical introduction – just to make sense of the title – let’s see what the island of cows is like.

Corvo is a very tiny land in the middle of the Atlantic Ocean, far away from everything. Its closest neighbor is Flores, which I wrote about in my previous blog post. You can come to Corvo by ferry as the easiest and cheapest transfer from Flores. Or we can choose to fly and small planes from Sata Airlines, which fly 3 days a week from Ponta Delgada to here. 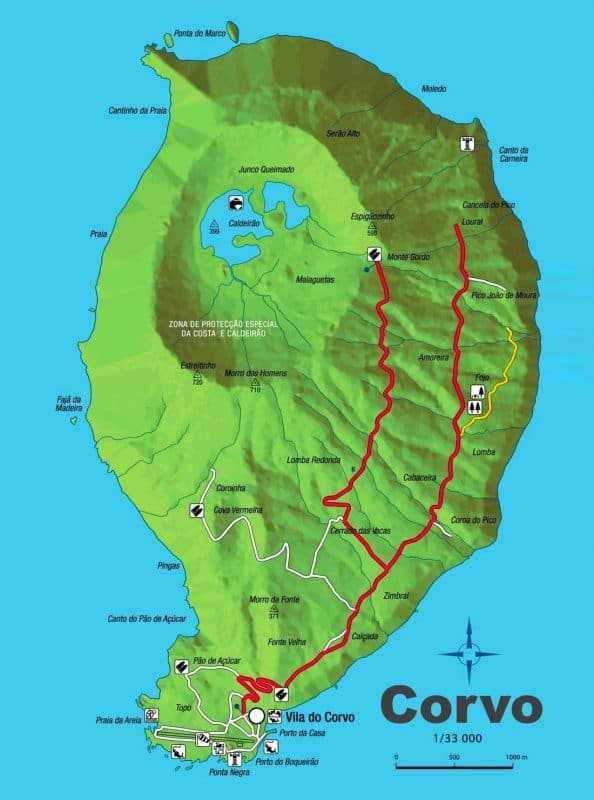 We chose the first option, but the trip to the island of cows almost failed. Naively, I thought I’d go to the ferry station the day before and buy the ticket for the scheduled flight. Forget this quickly, because Santa Cruz doesn’t have a ticket office or a scheduled ferry service. The port mostly looks like an impromptu construction site, although locals have argued I’m in the right place.

Luckily, I was rescued by a foreign couple who suggested to buy tickets online on Azores on Travel for a day trip to Corvo. I was incited to buy a last-minute ticket for the ferry. Okay, the ferry is a big exaggeration. It’s rather a whale-watching rubber boat than a ferry, but it takes in 45 minutes across the Atlantic Ocean between Flores and Corvo. Other tour operators’ boats were no better, in fact. The engine of the other rubber boat broke down en route and was stuck somewhere between the two islands with 35 passengers in the ocean. I think I’m glad I haven’t bought my ticket for that boat.

In my Azores blog post, where I gave travel tips for those traveling to the Azores was pointed out, but just to be sure you haven’t forgot. Do not to sit on the side of the boat on which the side tarp is pulled up because you are guaranteed to get wet by the end of the ferry trip. Or sit there when there’s only place there, but take care of rain ponchos and footbags, because in a wet dress, it’s not exactly fun to hike in the volcanic caldera.

Corvo’s true attraction – beyond cows – is a huge volcanic crater with a circumference of 3.5 km. It unique feature besides its huge size that you can go down to the bottom. This is rare because it is not usually allowed to walk around the depths of volcanic craters, even for the steep walls and safety.

Caldeirão, as the Portuguese call it, is the result of a two-million-year-old volcanic explosion that gave birth not only to the caldera but also to the island. A beautiful asphalt road lined with hydrangea bushes and cows leads to the crater, where you can go by taxi (€5) and on foot (6 km). The caldera’s highest and also observation point is at 718 meters, while the bottom is at 300 meters. In fine weather, which is quite rare, you can see the whole island from above with the Atlantic Ocean in the background, which is an astonishing contrast to the bright green landscape. 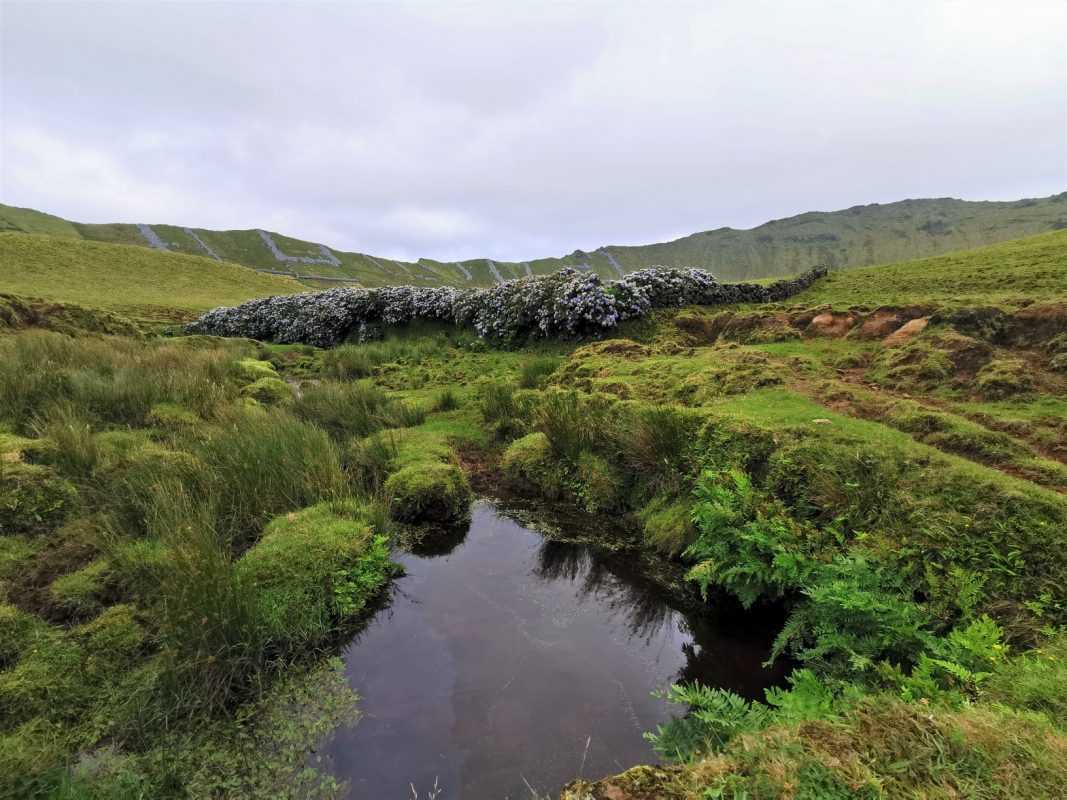 There hiking trail in the caldera and if you follow the yellow-red signs, you can’t really get lost in it. The reason we got a GPS device on departure is for sure, which is on a sure basis because while it is quite clear from above where the exit is, looking from the bottom up, the landscape shows a very different picture.

Speaking about landscapes. The caldera of Corvo was the most pristine and wild place I’ve seen in the Azores. True, we visited “only” six of the nine islands (Flores, Corvo, São Miguel, Pico, Faial, São Jorge), but here I really felt like I am in a lost world. In the ancient volcanic environment in the middle of the Atlantic Ocean. I wouldn’t have been surprised if a dinosaur suddenly appeared in front of me. Instead, however, I must be satisfied with the sight of cows grazing on the shores of the lakes in the depths of the caldera, who didn’t really bother to see people walking around.

The steep rock walls of the crater, thanks to the explosion millions of years ago and the subtropical climate, are now covered with grass and moss, which, due to the high sulfur content of the soil, are bright, yellowish-green everywhere. So if anyone sees a dark green image from the caldera of Corvo, it’s all Photoshop, not nature. However, an insentient number of hydrangeas is not an optical illusion. Basically, a century ago, it was an artificially planted flower, which it’s an invasive specimen at the expense of native plant, always gives me an impressive view. In an isolated environment like the volcanic crater and the end of the world, especially. 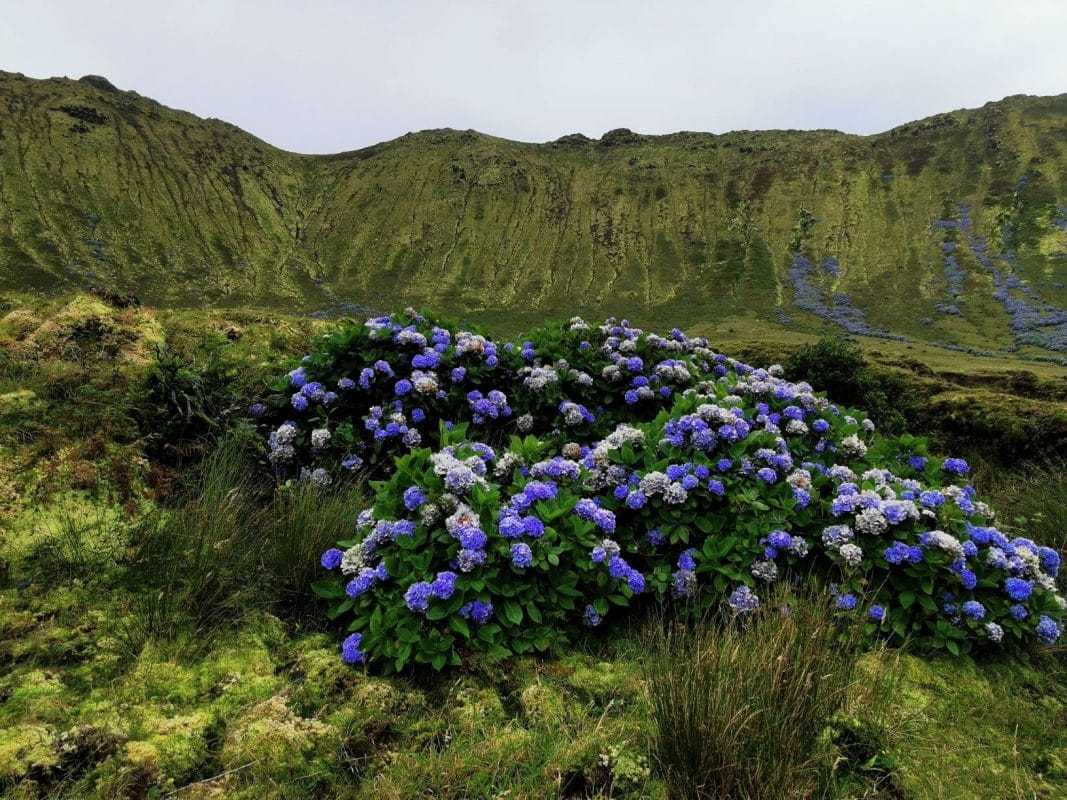 Caldeirão can be comfortably walked around in 2-3 hours with the right equipment but be careful where you step. Cows have a predilection for leaving pits in the grass and in many places the soil is swampy and moory. I saw a careless hiker sinking ankle-deep in the red-brown ground, which, in addition not being pretty, could result in serious cold. Inside the crater, the temperature barely reaches 15-18 degrees even in August, so a windbreaker is not only a good idea for crossing the ocean, but for the caldera tour too.

Returning to civilization and Villa do Corvo, the only inhabited part of the island, we had some time to look around until the boat returned. Our tour guide, who has lived here for 10 years, proudly took us around the village streets. We have seen, among other things, the local school, where 53 children go and where 22 teachers teach, but there is also a hospital, municipality, church and airport, even though it does not work at all this weekend. 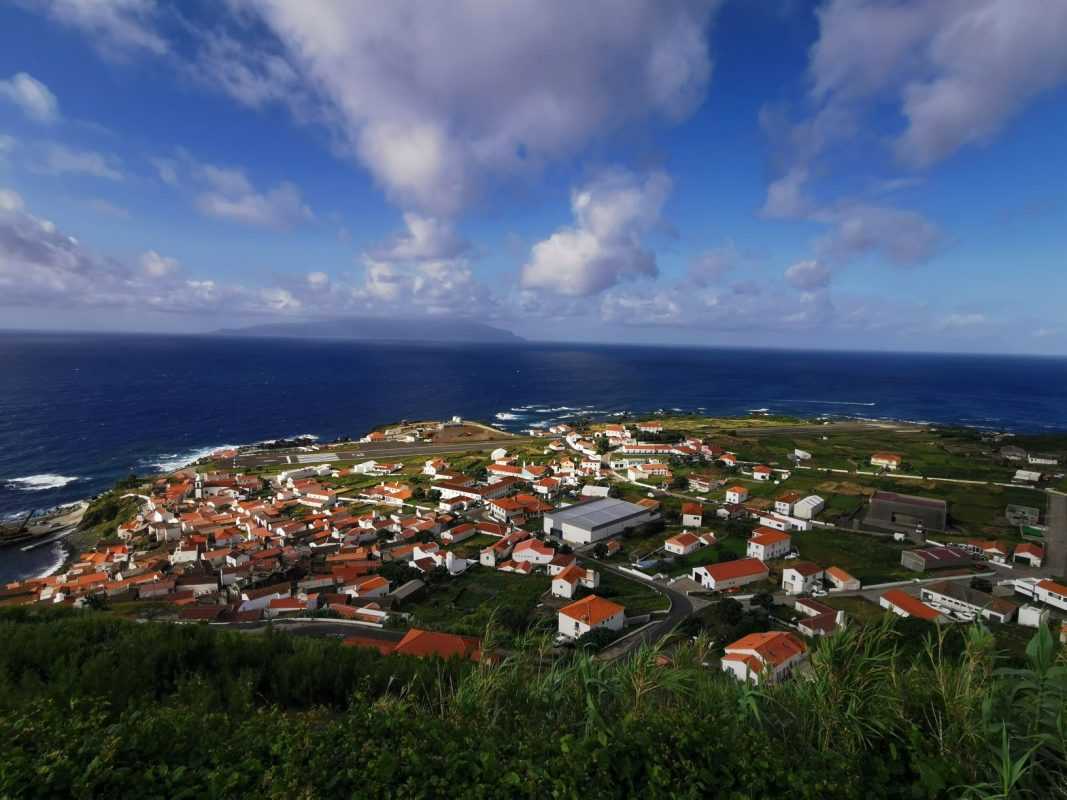 There are many uninhabited and ruined buildings, especially in the “old town” section. When I was on the island of Corvo, I felt the sand grain stopped in that particular hourglass. They’re running, but they’re not really going anywhere. However, the cycle of days and nights gives endless peace and quiet to the smallest of the Azores, where nature is still in the lord’s place instead of the people. And in hand of the cows, and that’s fine. 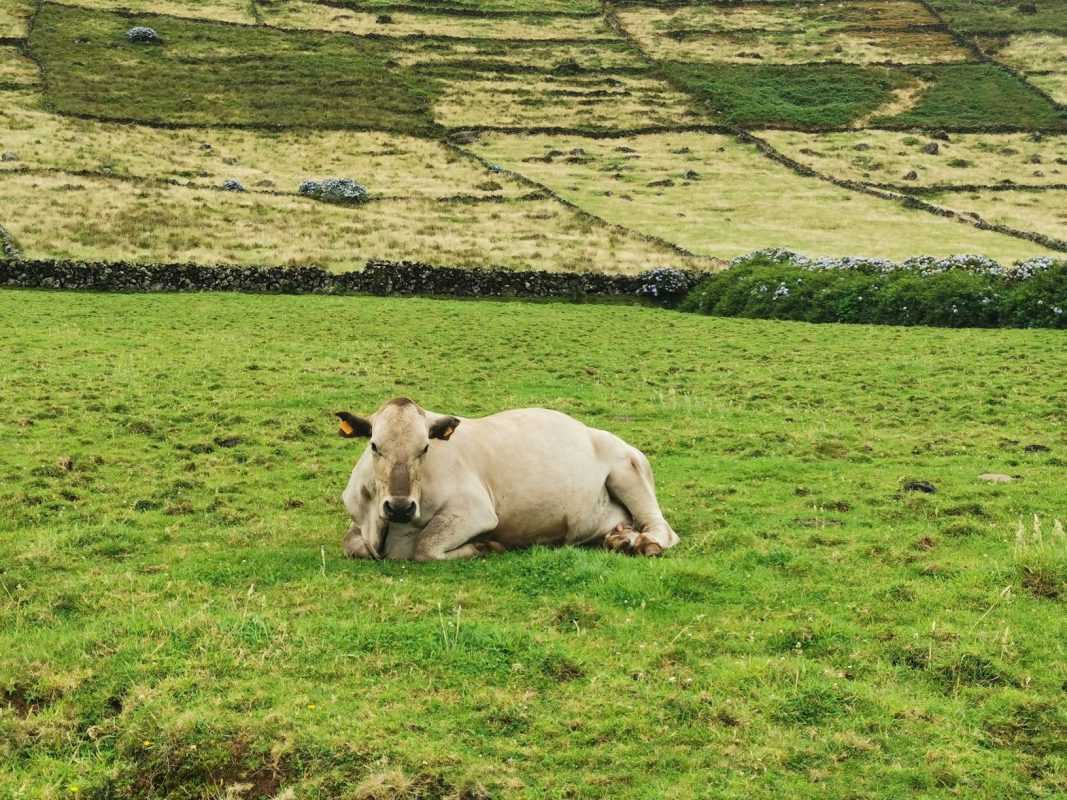