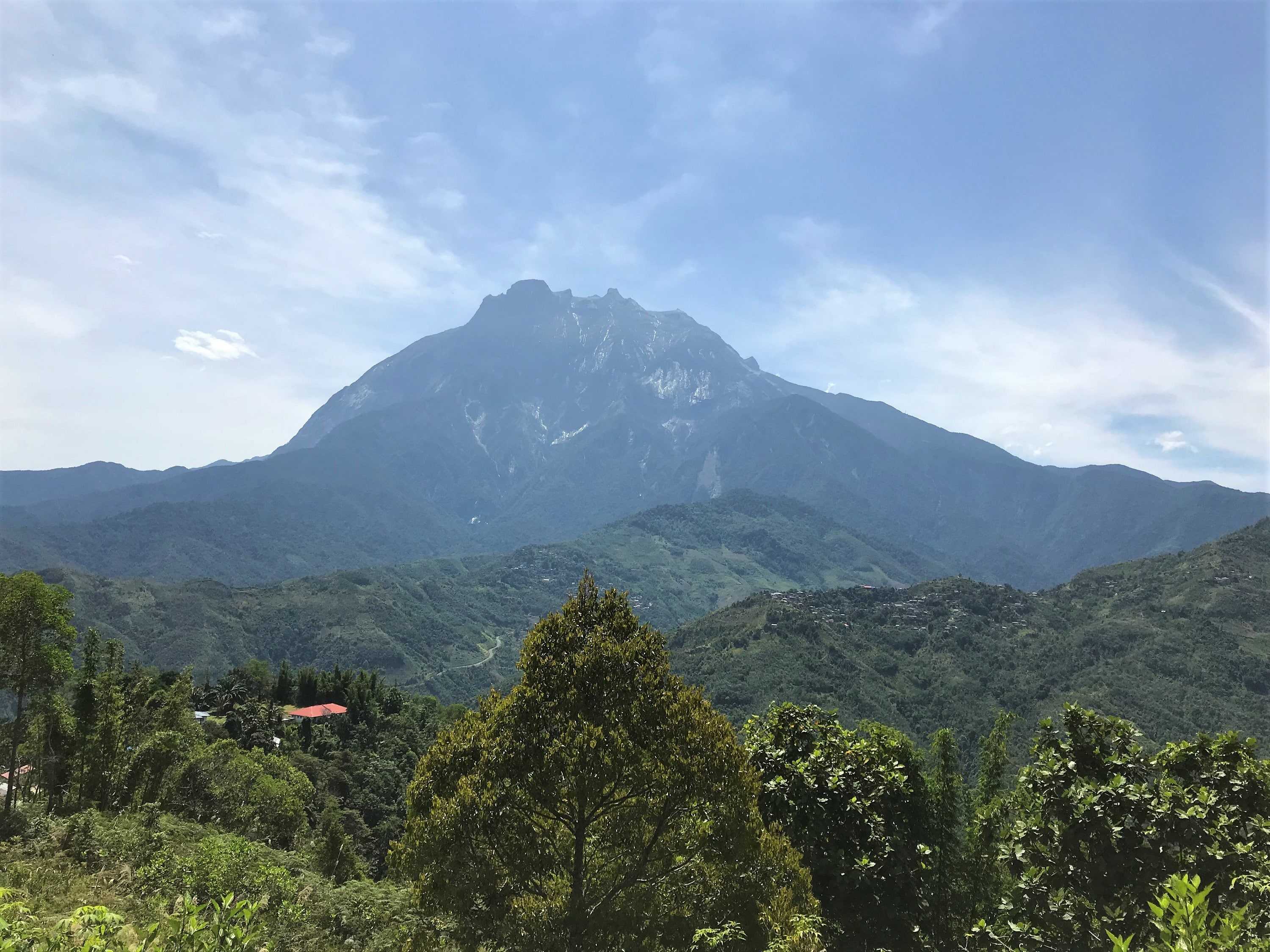 The name of the place in literal translation means the city of Mount Kinabalu, the sacred mountain of the Malays on Borneo. Kota is a city that reminds us of a modern, bustling, people-filled place. So let’s see what awaits visitors to the island after the jungle of Borneo when heading to the city of Mount Kinabalu. The first and saddest experience was from the window of the aircraft. The formerly lush, pristine venomous green forest was replaced by parceled terraces that ripped vast areas out of the ground. 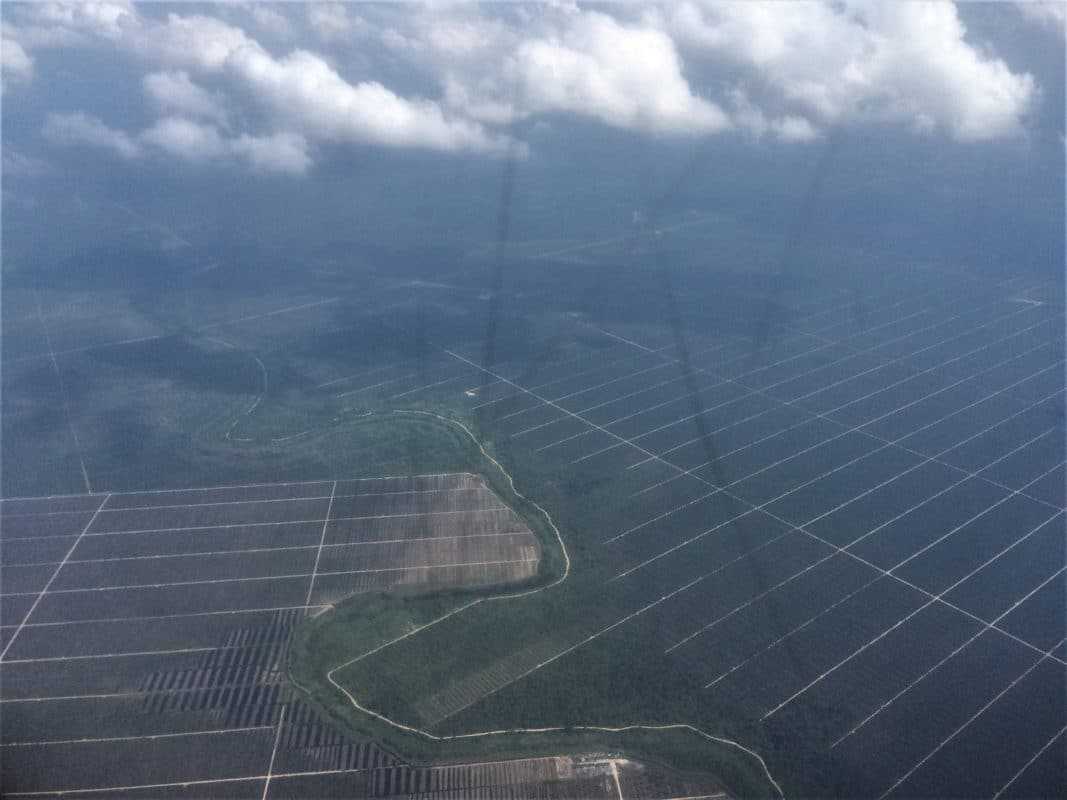 These oil palm plantations, which cause the rapid wipe out of rainforests, make Malaysia and Indonesia collectively the world’s exporter of palm oil (85%). Although the EU has recently adopted a regulation to curb palm oil use by completely withdrawing it from the biofuels market by 2030, palm oil is still used for many products around the world. The biggest problem with olive palm plantations, in addition to cutting down forests and thus putting countless species of animals on the brink of extinction, is that this palm tree is extremely aggressive and does not tolerate any other plant species besides ferns.

Moreover, it extracts nutrients from the soil so much that the soil becomes infertile for 100 years afterward. So there is no chance of native trees being restored to already unused plantations in a short period of time. Unfortunately, this is also part of Borneo, not just beautiful things. If someone travels to the island, he will eventually meet this phenomenon. Going back to the topic in the title, let’s see what can be done in and around the city of the holy mountain of the Malays. 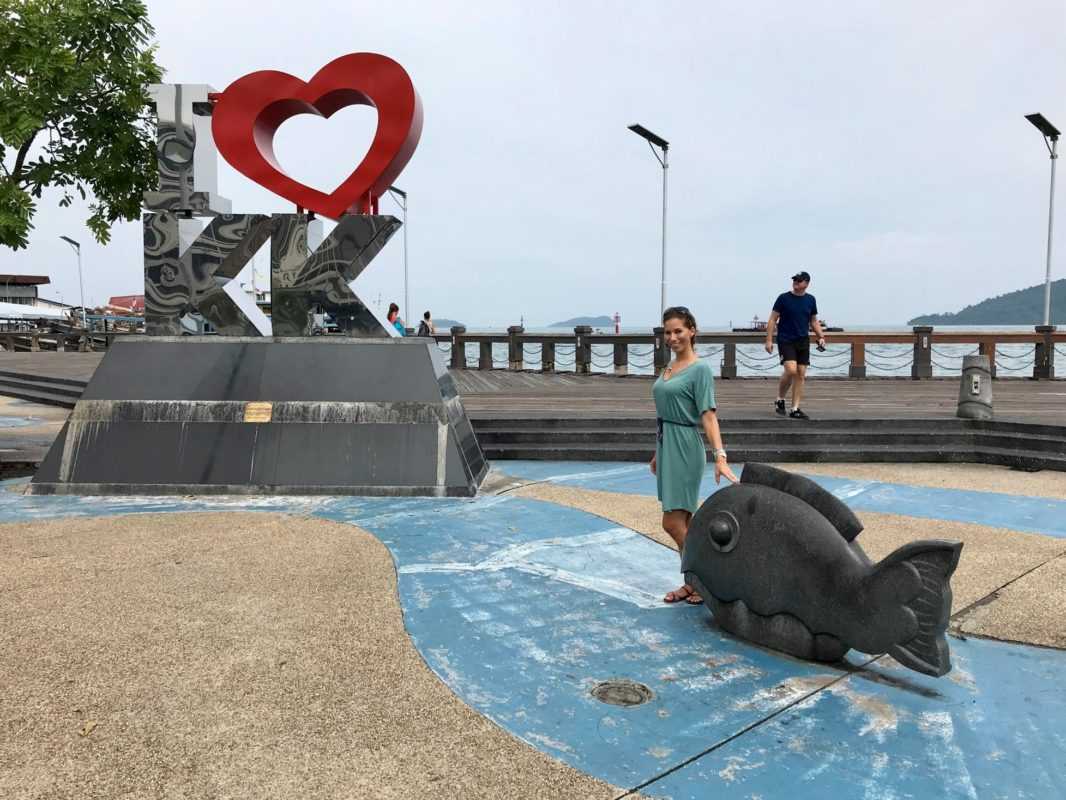 The city was almost completely destroyed in bomb attacks during World War II, so the place shows an image of a modern metropolis. There is not much to see in Kota Kinabalu, with exception of the city mosque, where non-Muslim worshippers are not allowed. The building looks very nice from the outside though. 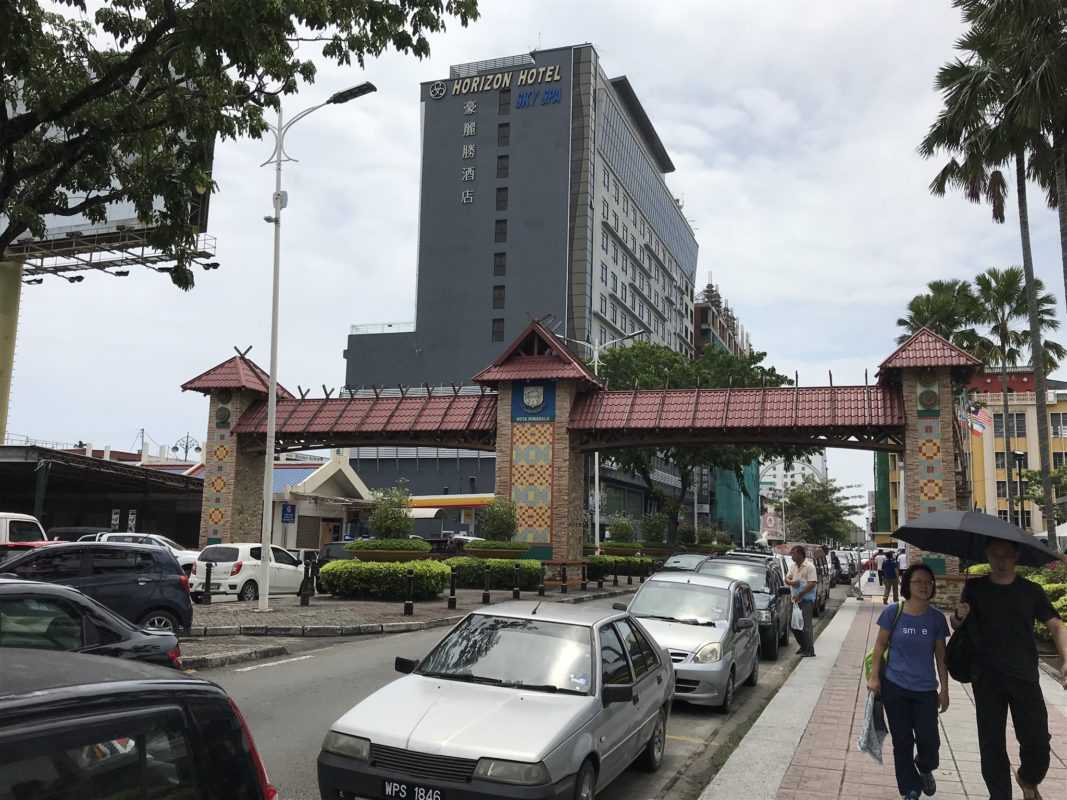 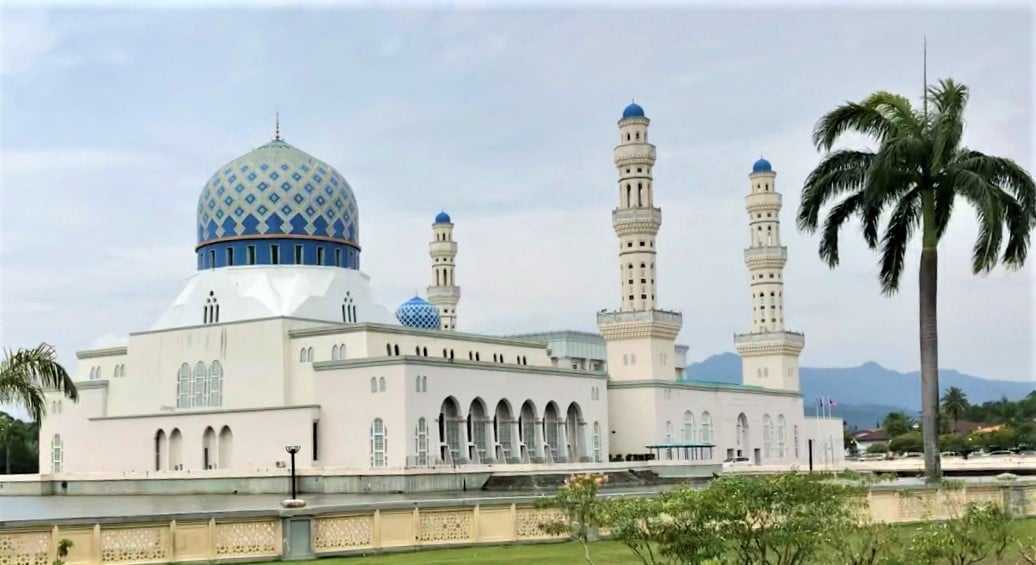 What gives KK its appeal takes the form of a market on Galya Street on Sundays and every day in the evenings next to the port. Life starts around 5:00 p.m. when vendors start unloading completely unknown fruits and vegetables on the counter. On one side of the market, there are vegetables and fruits, and on the other half there are bizarre neon-colored pasta sweets and thousands of seafood are waiting to be made for dinner. There will certainly be no shortage of culinary delights here, as shown in the photo gallery with the descriptions below.

If you want a special gastronomic experience, you should go to the 2nd floor of Shell Plaza at D’ place  Kinabalu, which is a traditional restaurant. The larva of the sago palm is an integral part of Bornean cuisine. It is extremely rich in protein and vitamins and is served in many forms (e.g. on pizza). 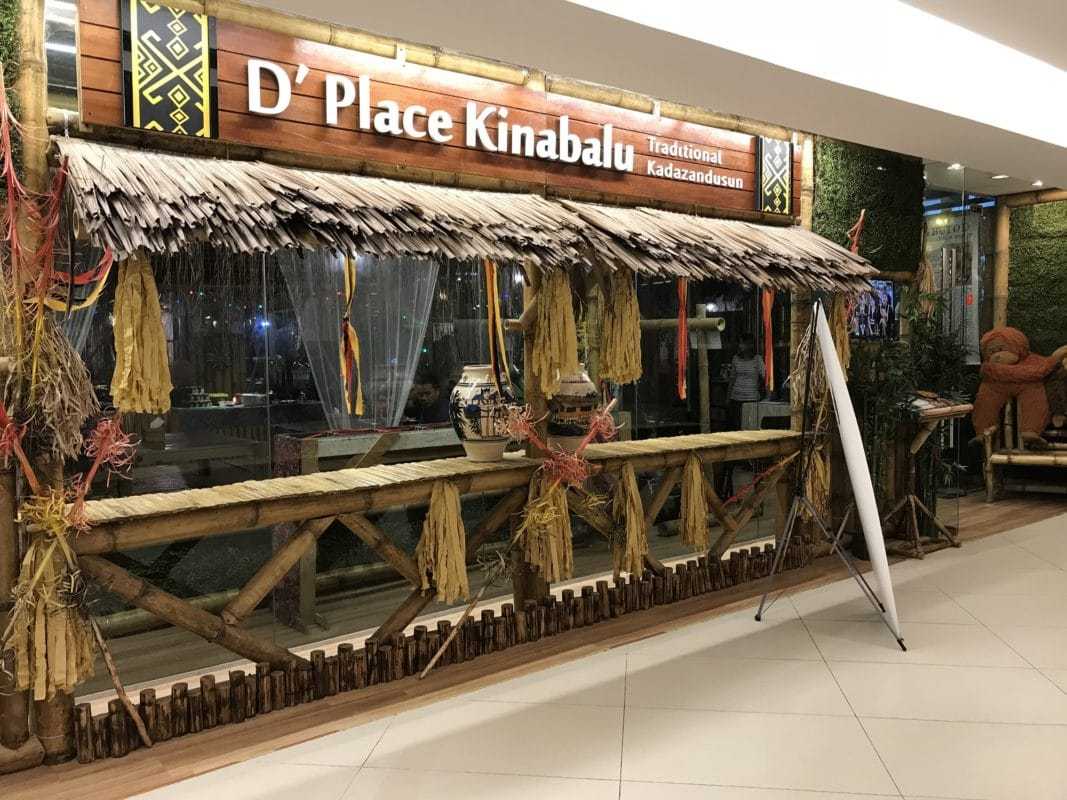 I got a taste of it, served on a cucumber after the serving lady carefully sorted out the hot-moving animals for dinner from the aquarium next to the entrance. Well, I’m not saying it stole into my heart, especially when it was baked and looked the same as it did alive, but while I was there, I gave it a try

Excursion to the surrounding islands

From Kota Kinabalu ferry port,  Jesselton  Point, there are many surrounding islands to be reached by boat:  Galya,  Sapi,  Manukan,  Pulau, and  Sulung. It is worth taking a day to explore the sea not only because you can sunbathe and the beach on beautiful beaches. 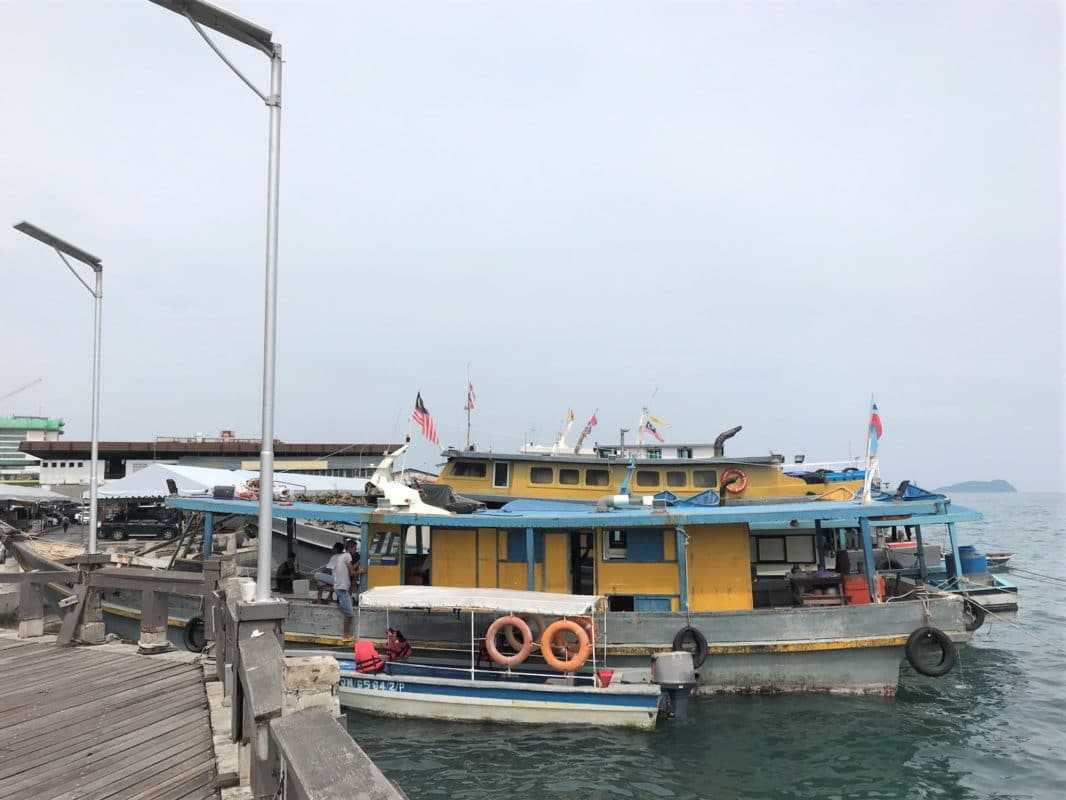 But also because you can become part of special experiences such as walking at the bottom of the sea with a glass bar on your head. Although I think I’d rather stick to traditional diving because the glass bar weighed nearly 20 kg and really pushed my collarbone.

Another special program is to glide over the turquoise water rope line from one island (Galya) to another (Sapi). This is the world’s longest water-stretched canopy track , where you can accelerate up to 60 km/h, all in a completely safe way, sitting in a strap. It’s a pity return ticket can’t be redeemed for the zipline. 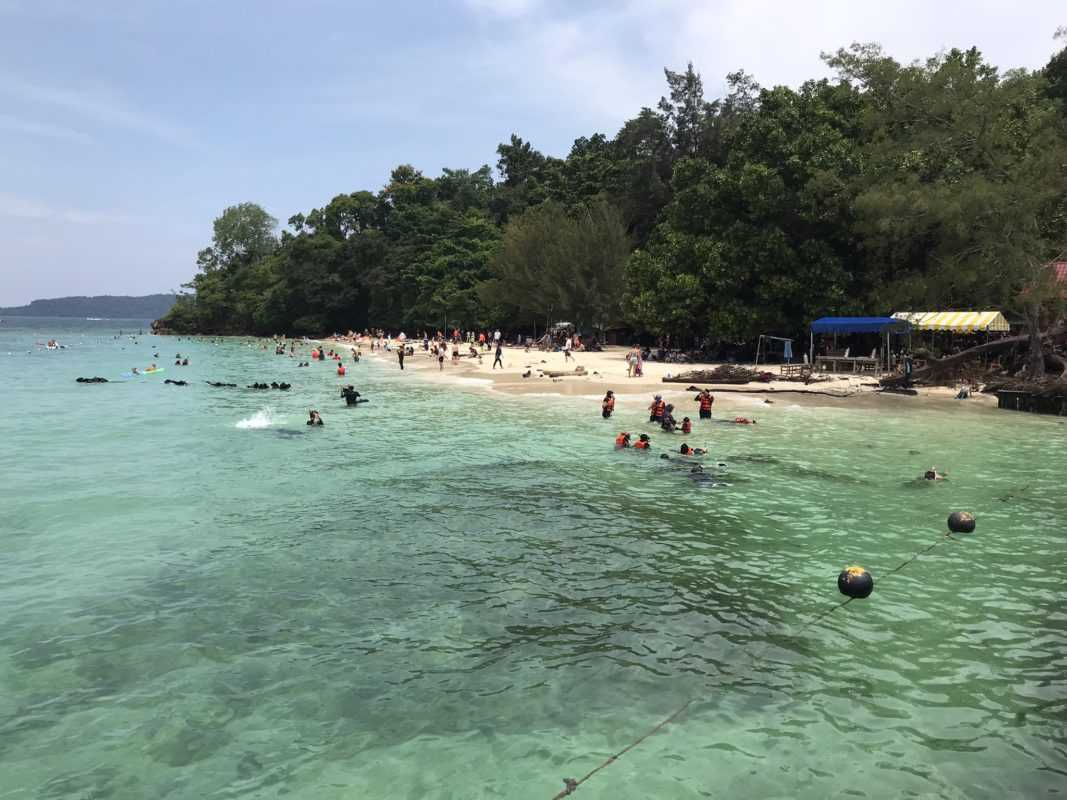 Among the islands, my favorite was Manukan, which is further away from Kota  Kinabalu, but accordingly, there are fewer tourists (90% of the visitors are Chinese )and garbage. More specifically, on this island, I have not encountered any garbage at all,  which can no longer be said for Sapi and Galya. Unfortunately, the phenomenon is typical throughout South-East Asia, with inadequate waste management resulting in a lot of plastic and other rubbish on the sea surface. I wrote about this in detail in my article for National Geographic earlier. If you are interested in the topic in more detail,  click here to read it. 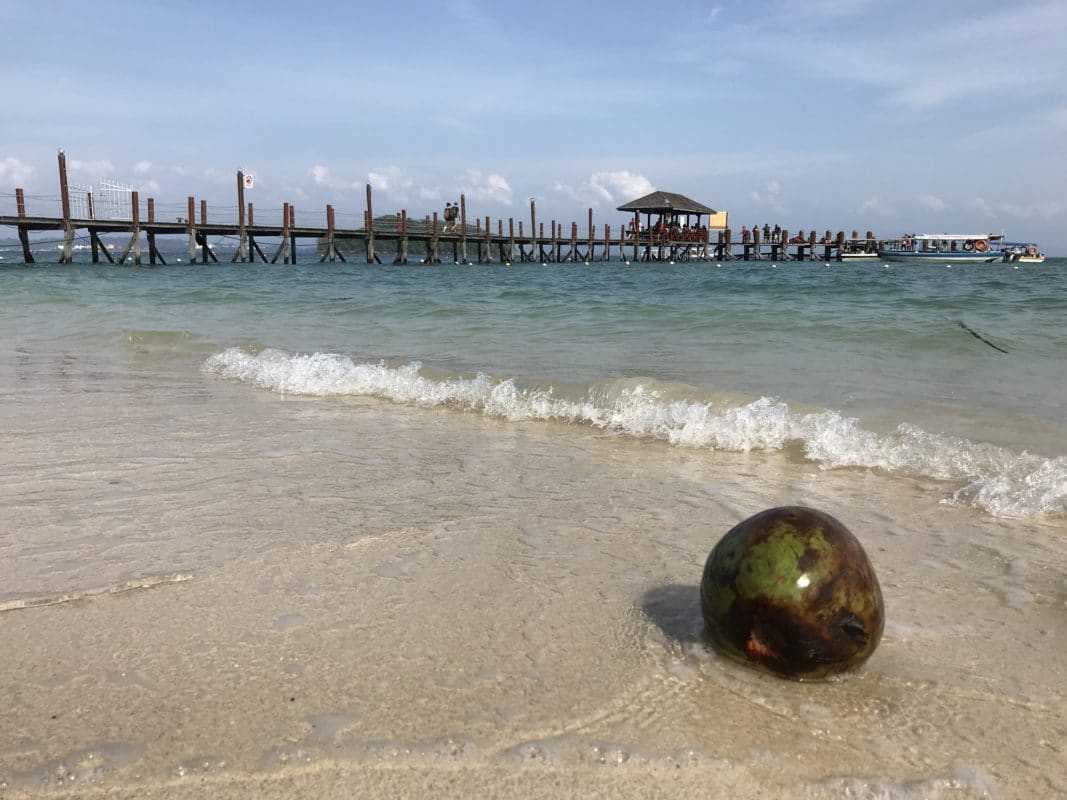 The island of Manukan is in every way a mini garden of Eden in the middle of the South China Sea. In the hammock stretched among the palm trees, it is nice to relax a little and be present. Or looking for coconuts on the beach, which the waves bring here from time to time. Or just watching a crow glide past you in the burning sun.  It’s allowed to leave only a footprint in this paradise together with nice photos. 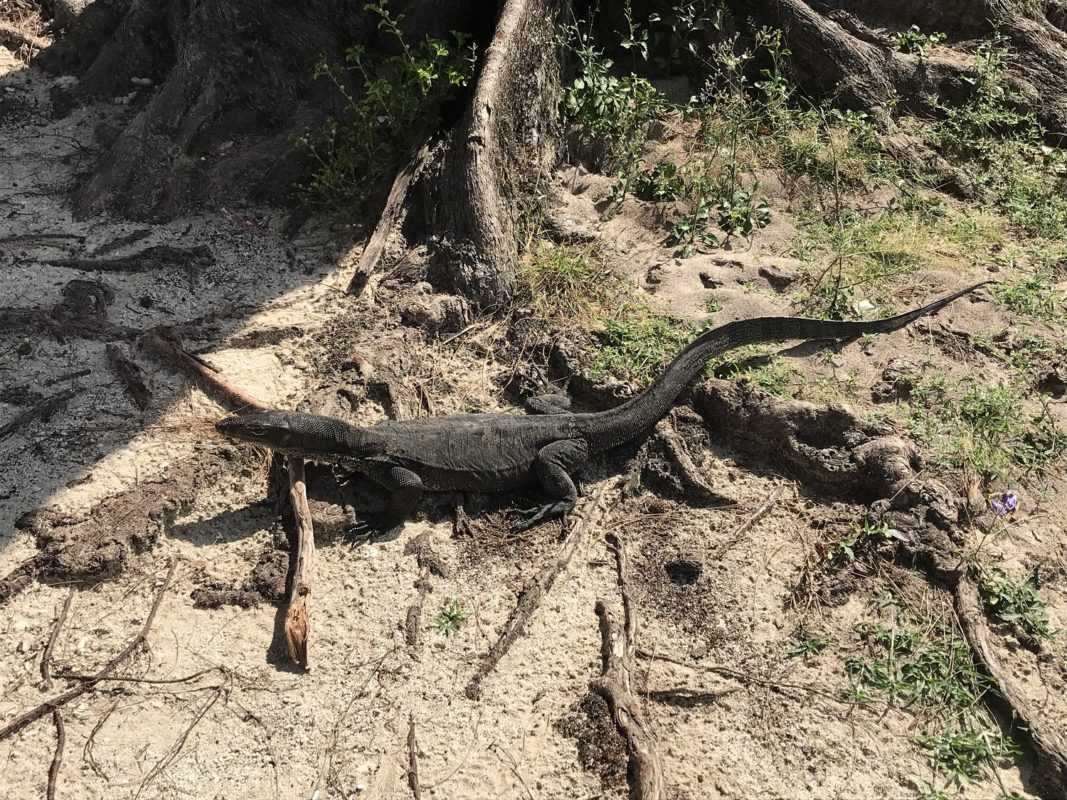 In the footsteps of Bornean tribes

Exploring Borneo would not be complete without getting to know the people living on the island. In my blog post about Mulu  Gunung park,  I have already written about the Penan tribe. When you walk around Kota Kinabalu and sail to Galya island, you inevitably encounter the sight of people living in tilt houses. At first, their lives may even seem romantic, but more closely, the place is anything but romance, but a slum. 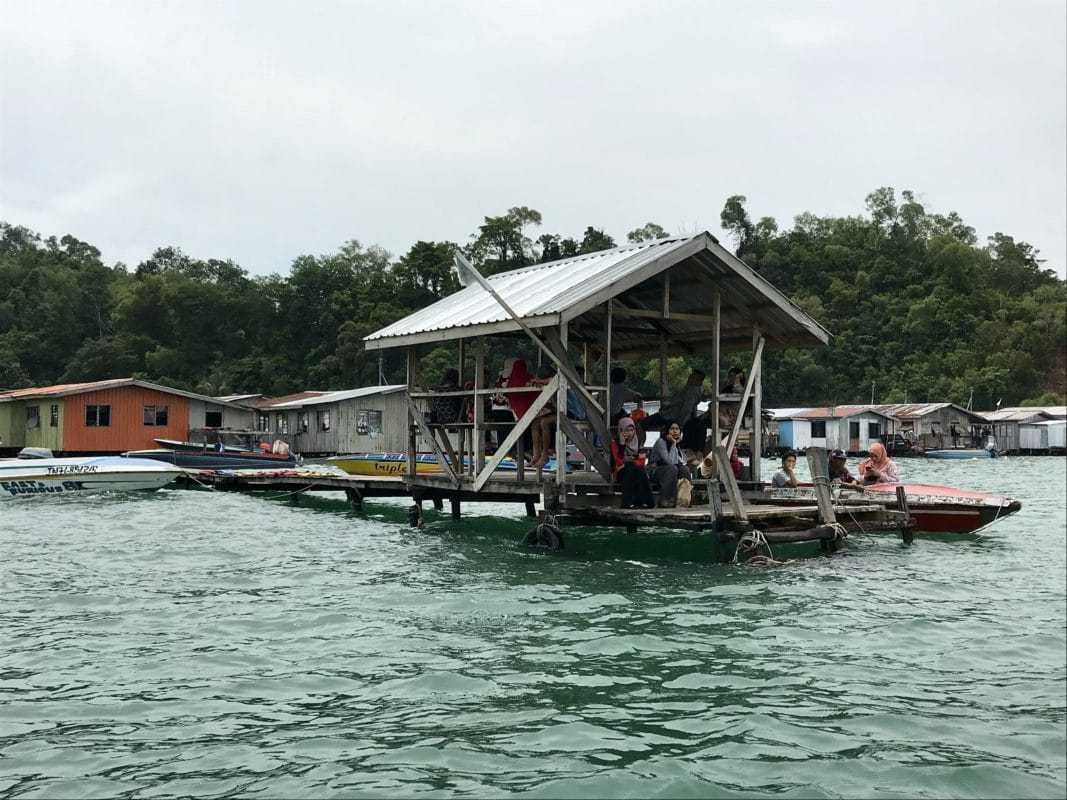 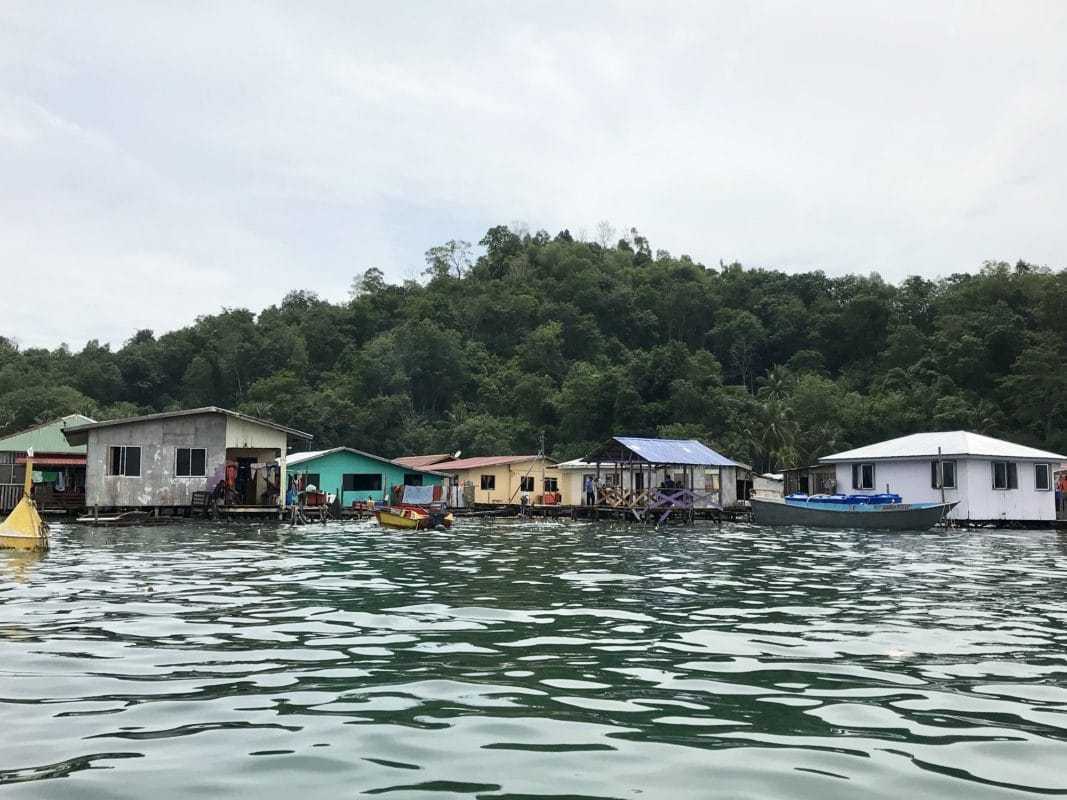 The pile village, also famous as Kampong  Pondo, has nearly 6,000 people. Most of them are war refugees from the Philippines. Here, children do not go to school, people do not have papers or nationality, so they do not have access to basic health and social care. In a sea of garbage, children play all day or beg for money, while their parents work for starvation at the nearby Kota  Kinabalu market. Black work, of course.  The pile village is considered a no-go area, where not only the locals but also tourists, do not put their feet because it is not safe. Our boat captain probably had some local knowledge or a connection to the village, because he took us between the houses, so we could see at close proximity the life in the pile village.

The situation is much more cheerful in the cultural village of Mari-Mari, a 30-minute drive from Kota  Kinabalu. It is a perfect half-day program to learn about the habits of the five great tribes living in Borneo: Dusun,  Rungus,  Lundayeh,  Bajau,  Murut. 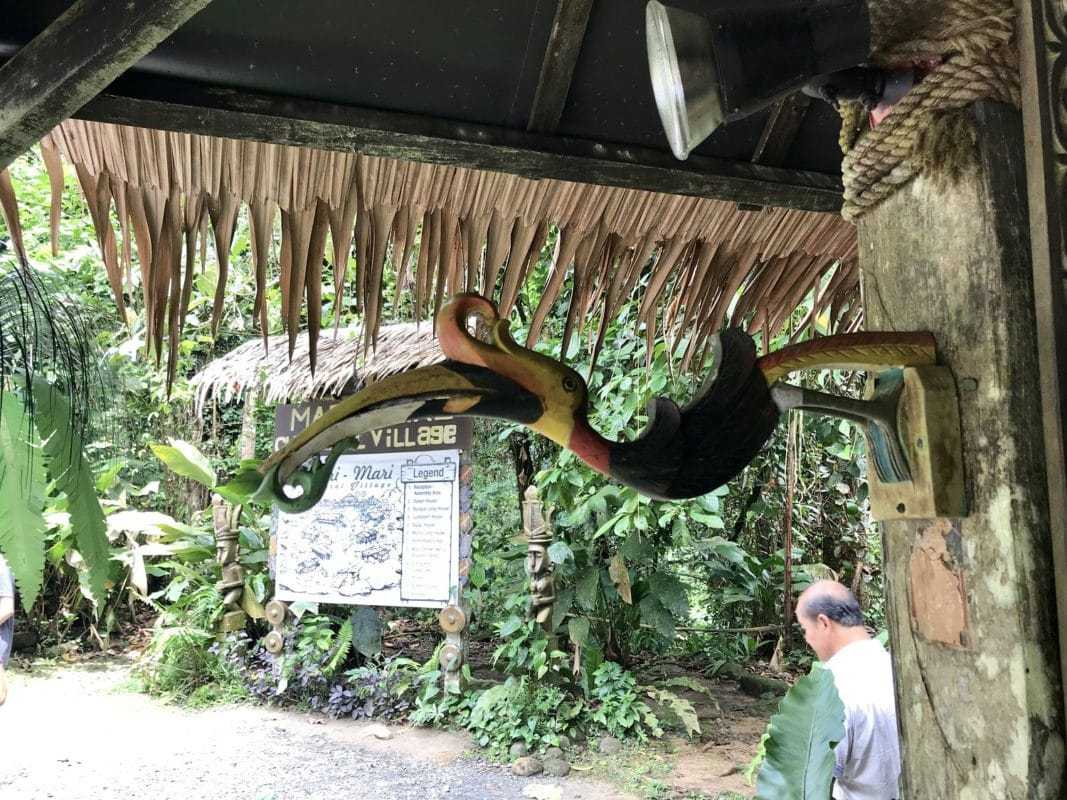 The name of the place itself is inviting, since the Malay-Indonesian word repetition, mari-mari, means come and come. At the entrance to the open-air museum, which is located inside the jungle, visitors are greeted by a hornbill bird, which is Malaysia’s national bird. During the traditional program, you have the opportunity to taste special dishes and drinks, such as Malay rice wine (lihing), or bamboo-fried rice dishes, from which we got a taste right at the first station from the members of the Dusun tribe. 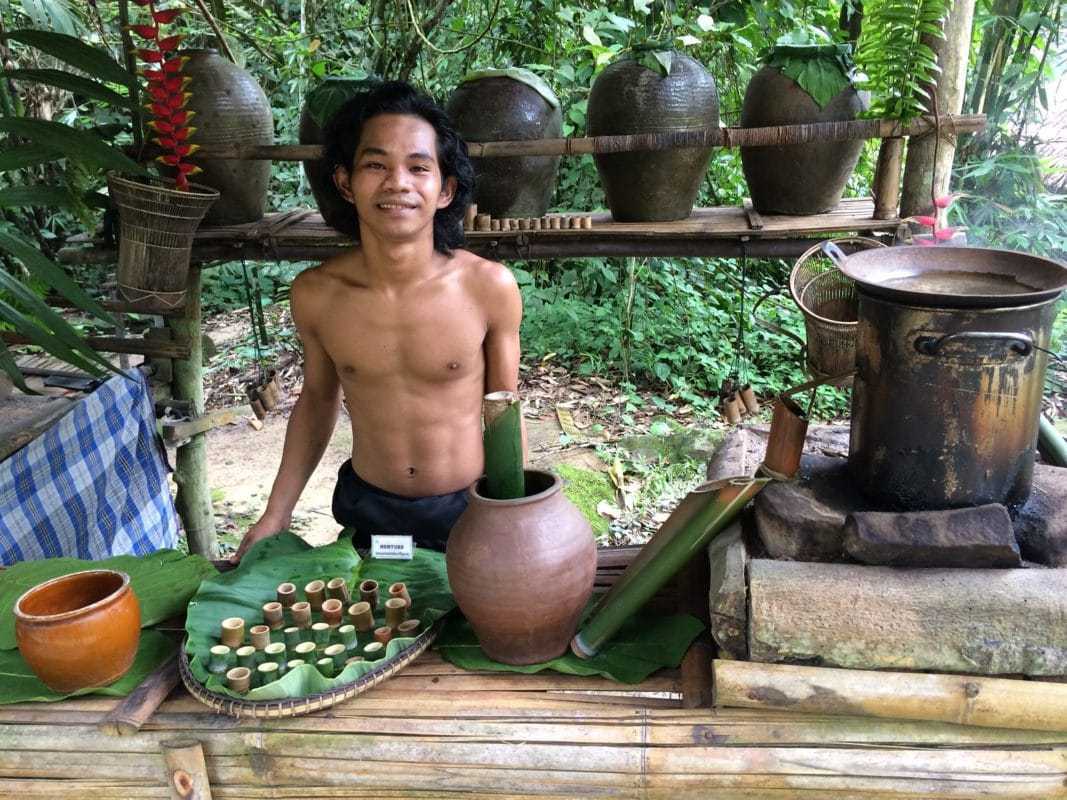 While walking between the houses, we tried the blowpipe hunt, made by members of the Murut tribe. We jumped on trampolines, not today’s modern rubber board. But on the classic Malaysian wood and bamboo version, which was once one of the house’s fixtures. In addition, we found out why crocodile worshippers are members of the Lundayeh tribe and why 6-9 meters of animal statues were built in the jungle. If you feel like you can also try the art of fire-slinging, which, from the outside eye, isn’t such a simple stunt. Visiting mari-mari village is a very enjoyable program ending up with an ankle-breaking bamboo dance show and dinner.

Mount Kinabalu with its 4,095 meters is the highest peak in South-East Asia and the sacred site of the Malays. However, thanks to the tropical climate, even if you were looking for snow at the top, it will never be a snow-covered, icy peak. Climbing and watching the sunrise from the sacred mountain is the main program for many people traveling to Borneo. It is possible to do it without any special technical preparation. It lasts 3 days and costs $5-600 per person. 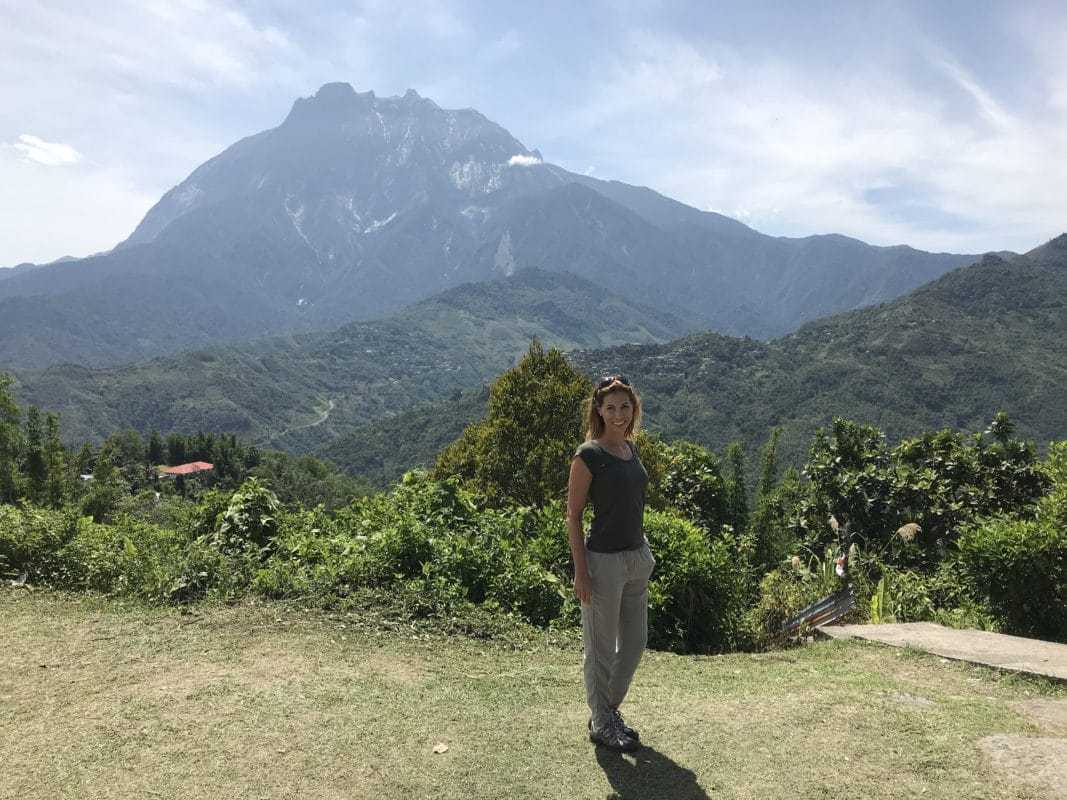 We now missed this opportunity but instead of climbing, we searched for all sorts of special and endemic plants on the side of Mount Kinabalu that live only here.

Passing through waterfalls and lush paths, we saw diesel wood that produces the valuable biofuel, countless orchid species – including the Rotschild orchid, which costs $5,000 and is native only here – a jug of different sizes and herbs used for medicinal purposes.

However, the most extraordinary plant had to be literally hunted, as the legendary rafflesia does not grow in every bush. The red flower is a parasite and looks like a cabbage. It has no roots, no leaves, no tribe. On the other, it smells of unbearable carrion– I admit I didn’t feel it, although they didn’t let me get too close to it. The rafflesia attracts flies and flying cattle as magnets to help in pollination and survival. 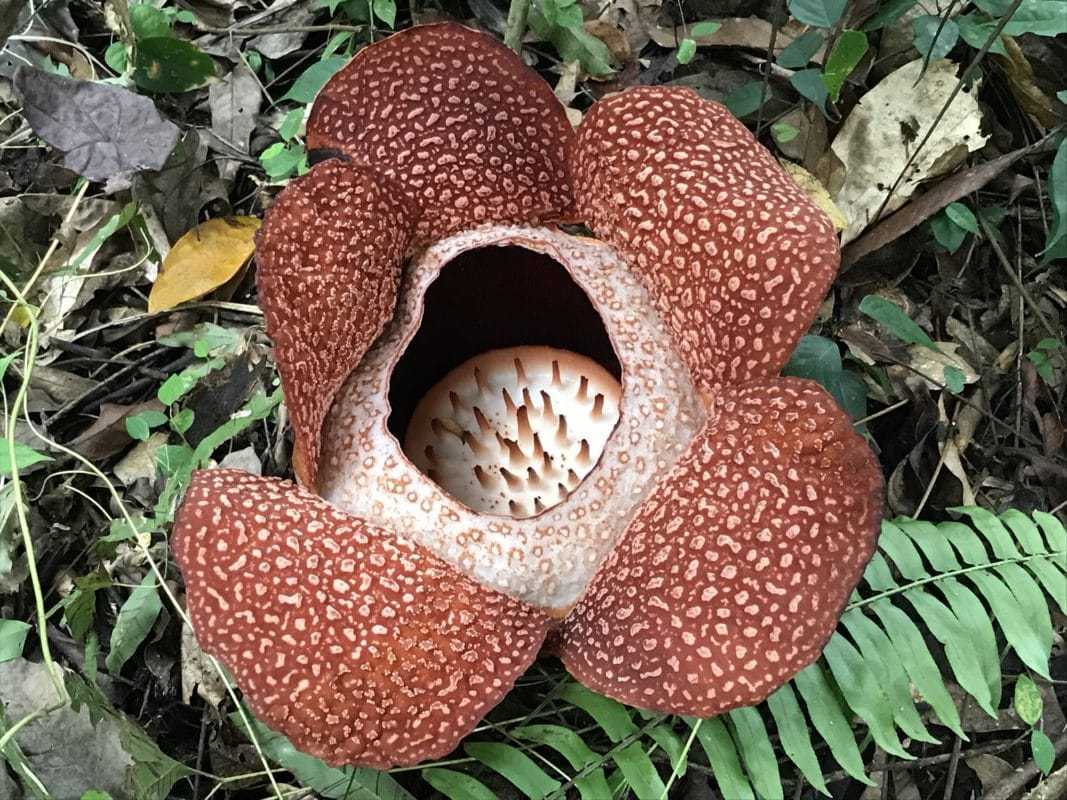 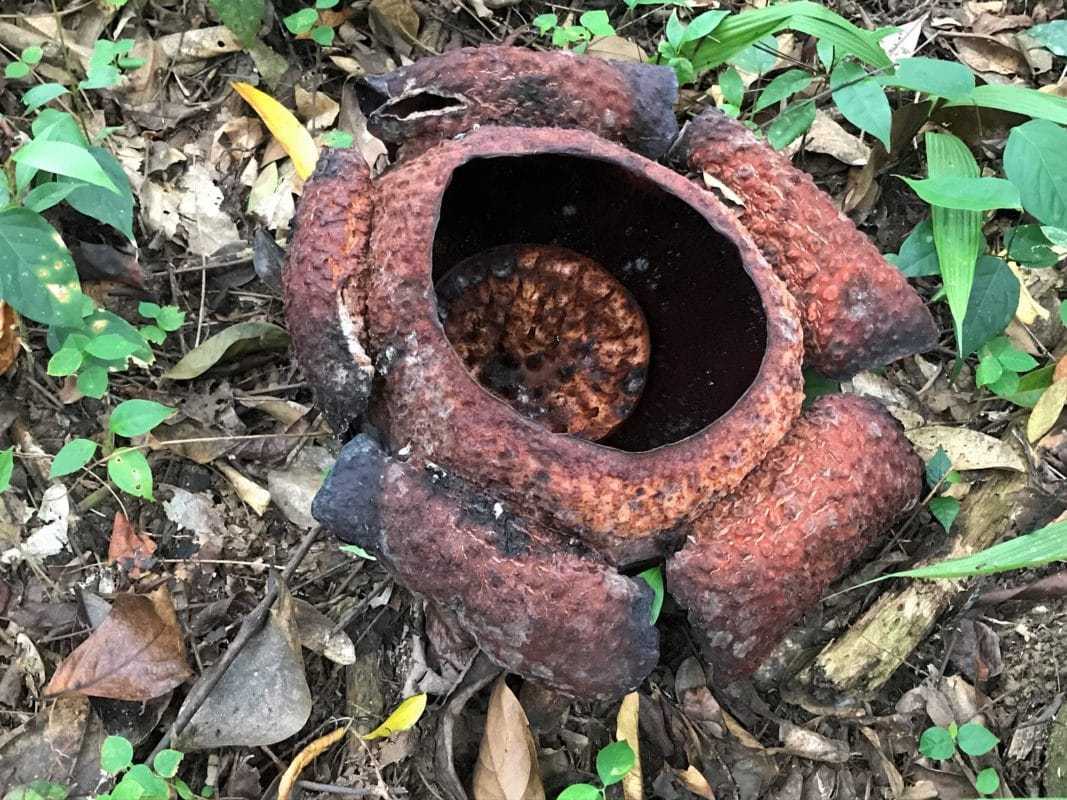 Ten months are required for the development of rafflesia, during which the plant size can reach a diameter of up to 1 meter and weigh up to 15 kg. What we saw was a small specimen in the yard of a house, but this is probably due to artificial support. Very few specimens can be found in the wild unless you are David  Attenborough or an avid climber.  At the end of the botanical tour, we agreed to conquer another canopy track after which a pampering rest in the warm thermal water was really nice. 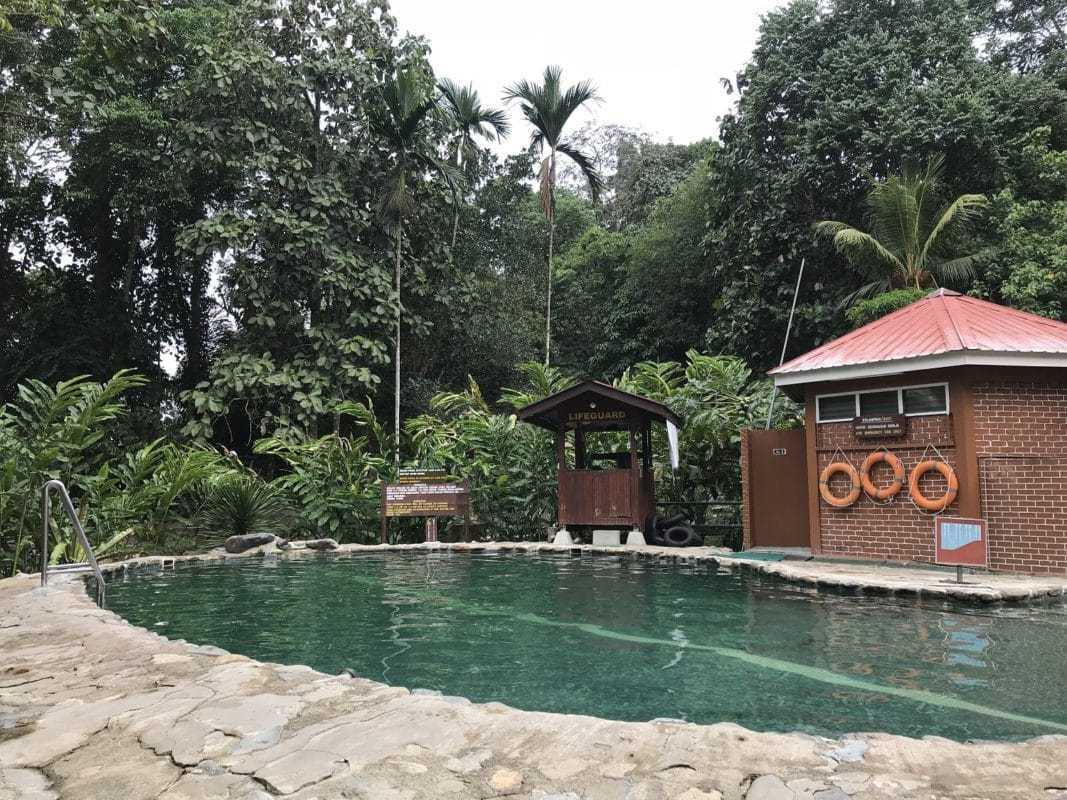 Although I haven’t climbed the holy mountain but early the next morning, I could see it from the window of the aircraft in golden rays. Mount Kinabalu has really lightened up my departure.  In my next and final blog post about Borneo, I will guide you to the world of the legendary sea gypsies and show you the orangutan world. Keep coming with me. 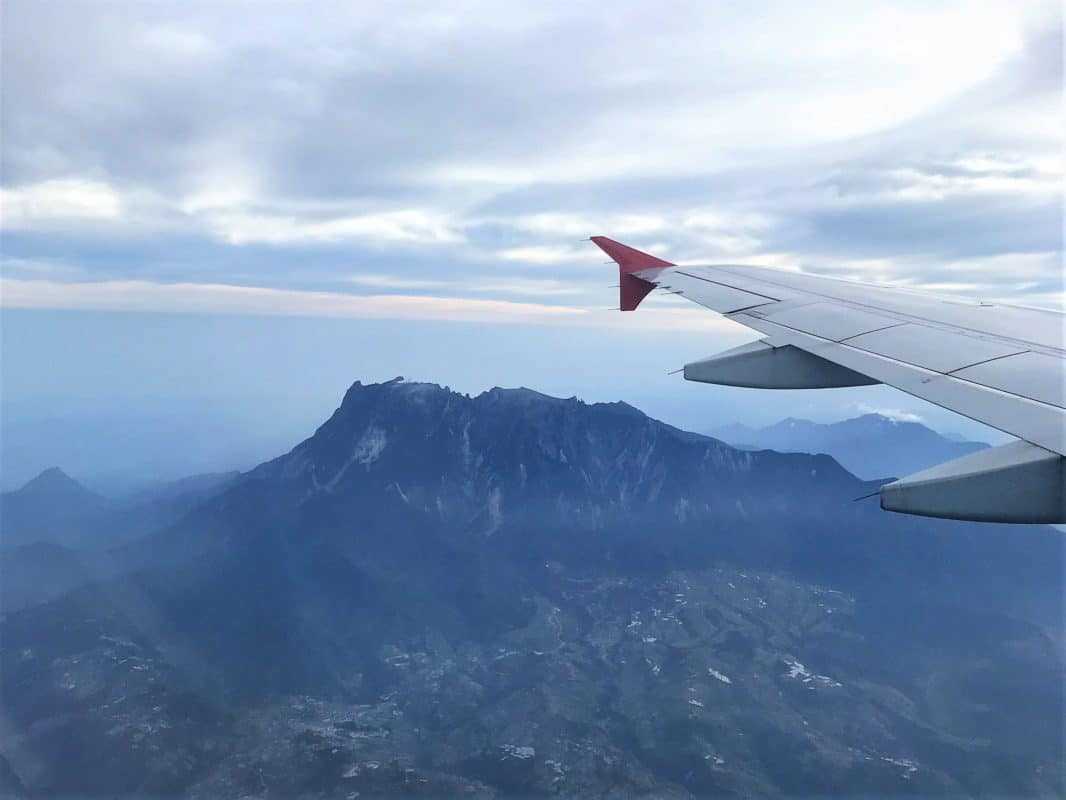