The highest point of Börzsöny Mountain is Csóványos and is considered one of the most beautiful tours in all respects, but its climbing requires a good physical condition. While Várhegy is an easy destination for all ages, it also debuted as a new lookout this summer. Here are the two cool hiking guides, from which you can choose according to your interest and fitness level. But whatever you decide, one thing is for sure. You will be no complaints about views and experiences in either place. 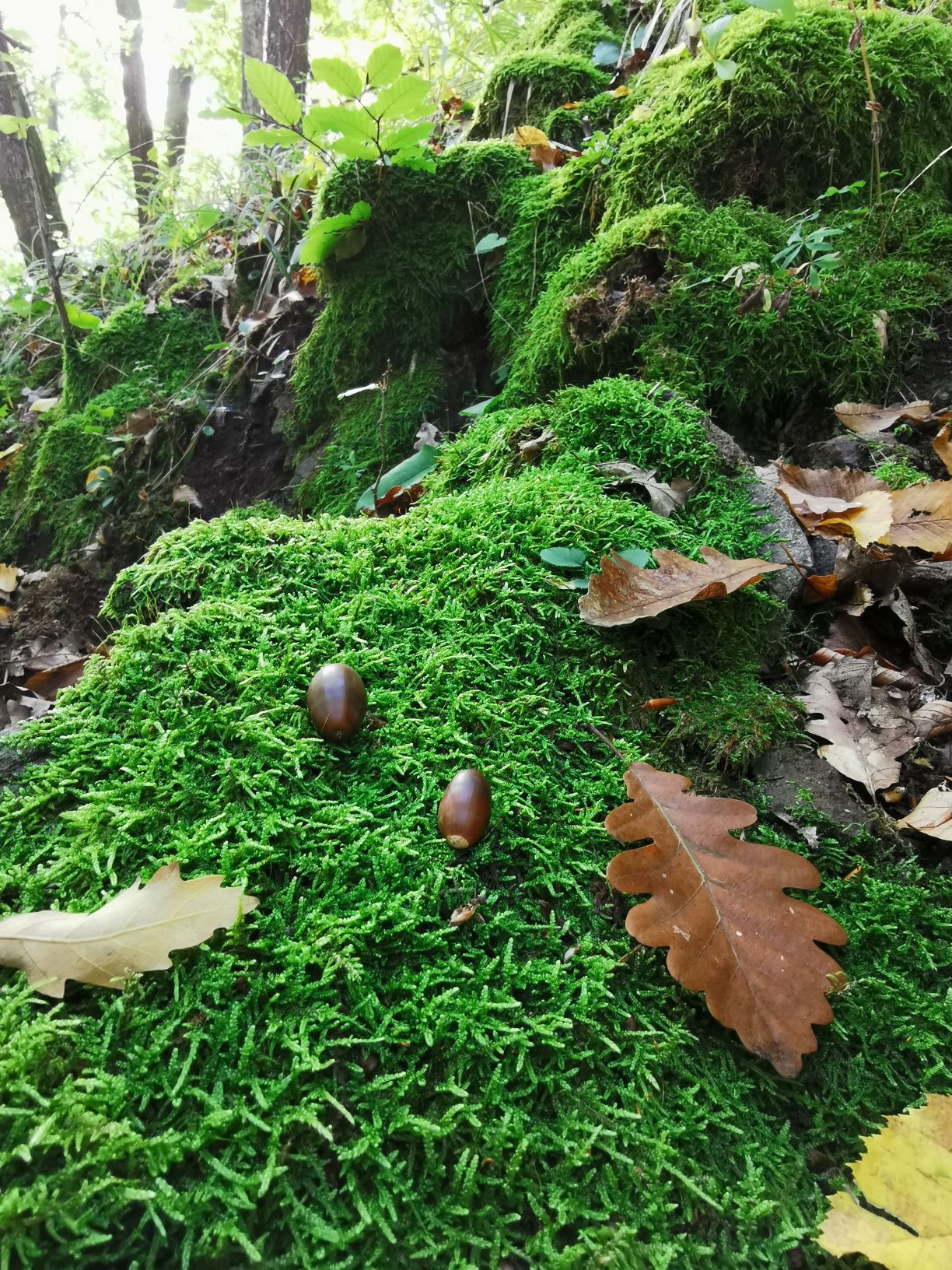 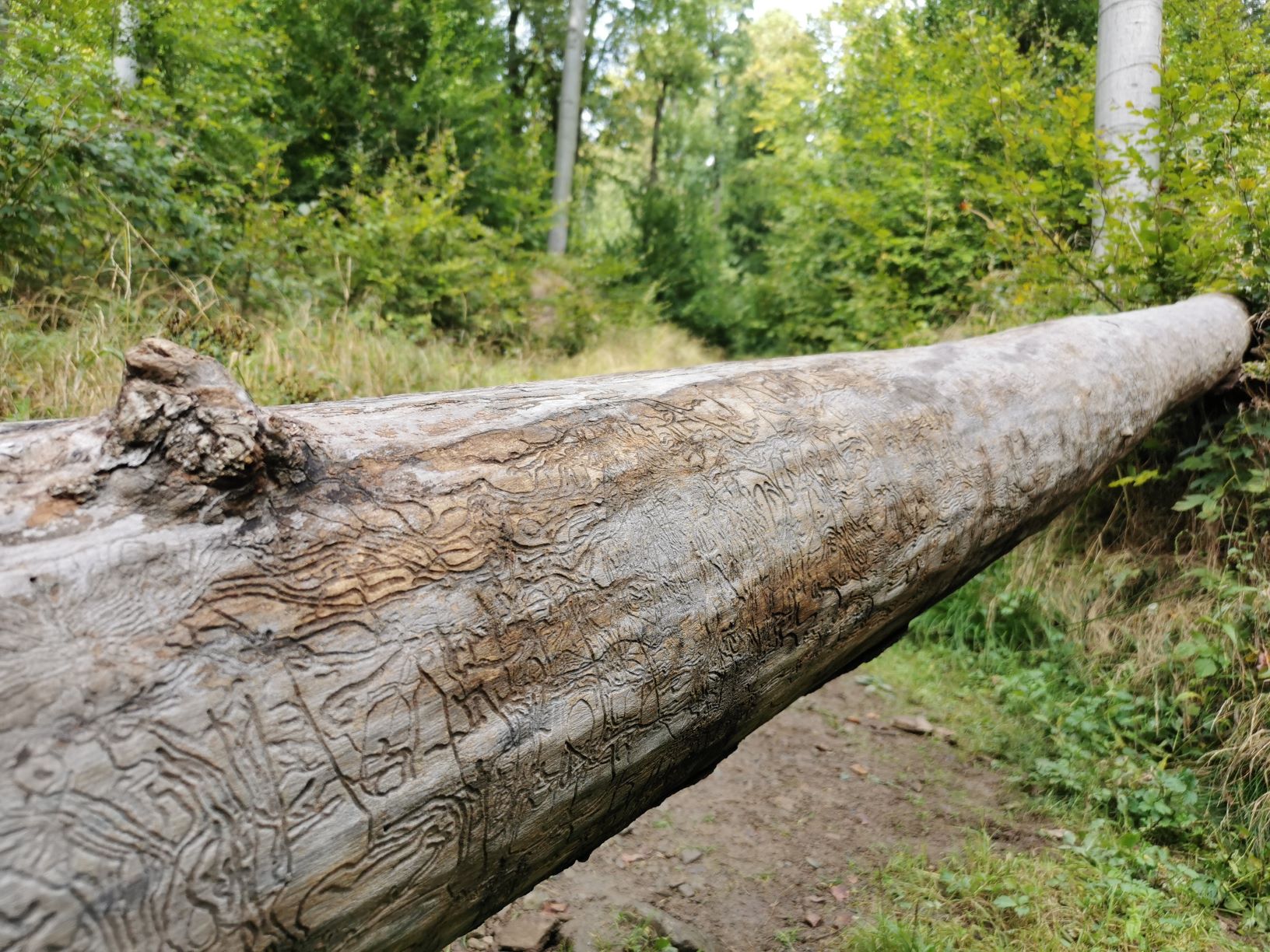 Before we climb the mountain like mountain goats, it is worth clarifying what we really want to climb. Börzsöny is not an ordinary mountain near Budapest, on the side of the Danube Bend. It’s a volcano that was born from water and fire. The area of Börzsöny was once covered by a sea of 150-200-meter depth. The sea quickly filled up on an earth history scale in just a few hundred thousand years. 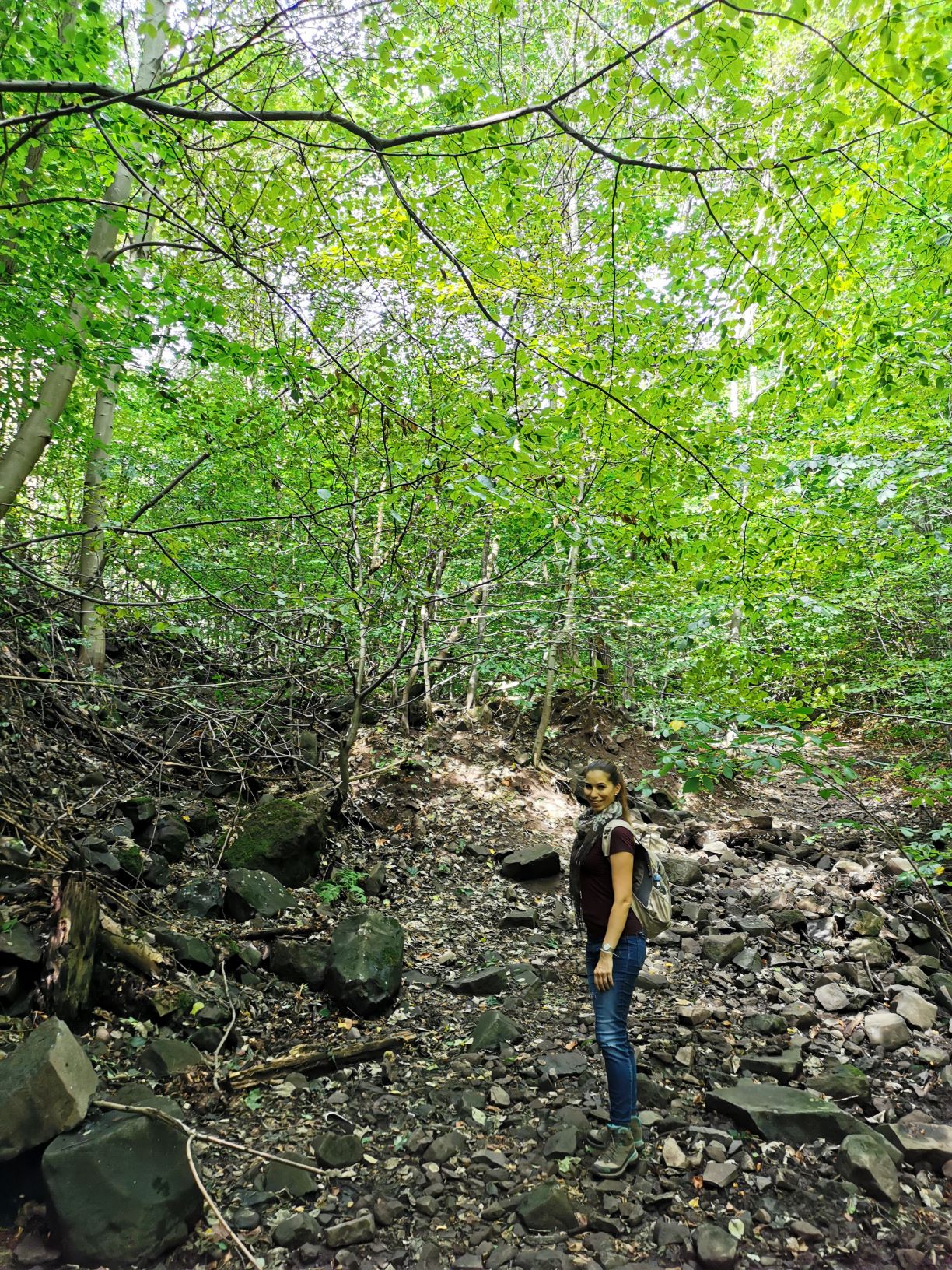 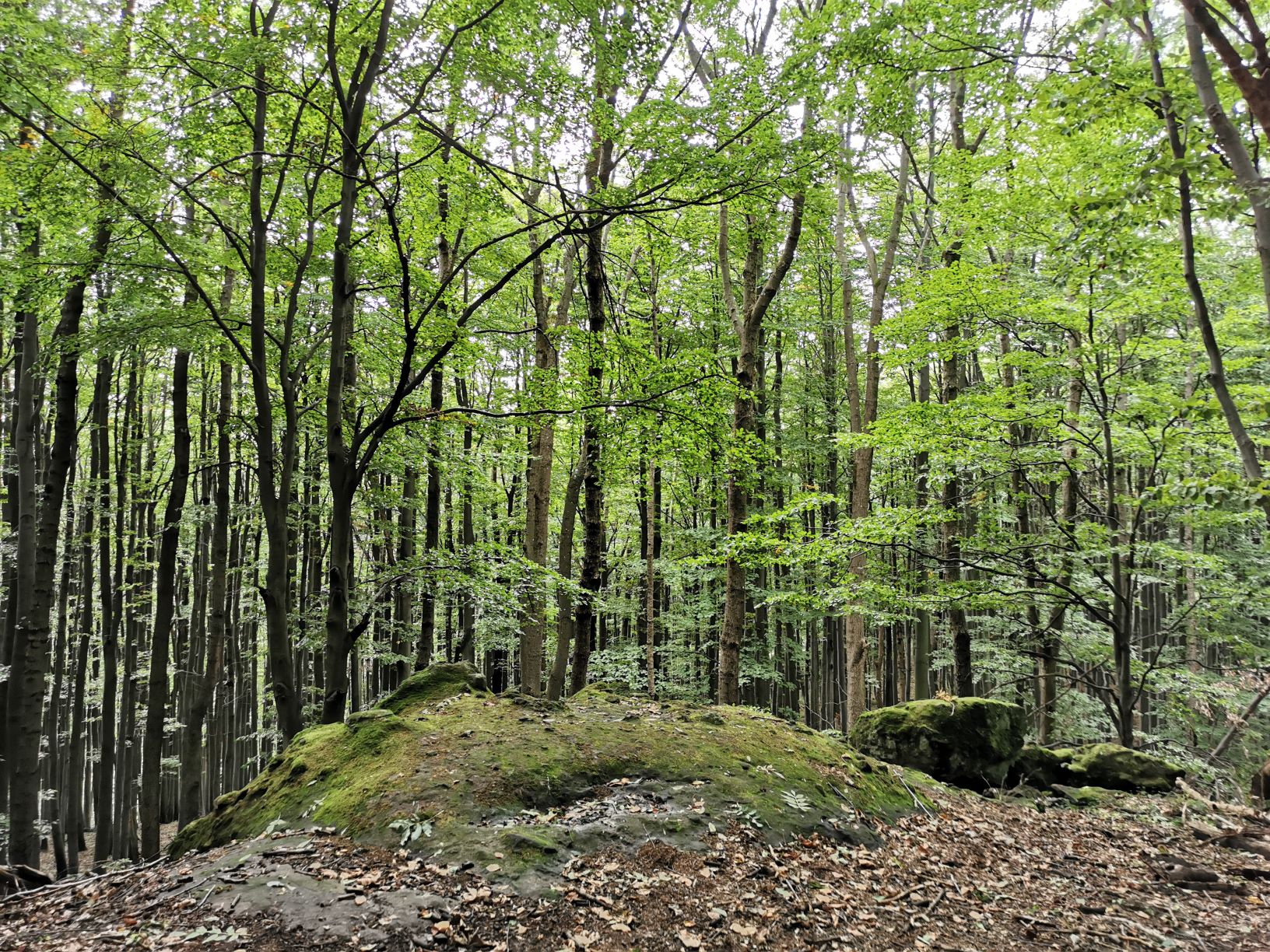 The dried-up, sandy-pebble sediment was pushed up to 1,500 meters by a sudden volcanic explosion 13-16.5 million years ago, of which “only” 938 meters remained today. So when you walk on the ridge of Börzsöny, let’s not forget that you are actually on the edge of a volcanic caldera. In addition to the breathtaking panorama, this information can give you a little extra to your excursion. Tip: if you want to see findings of the former volcanism, visit the Kámori-rókalyuk. This special place is not affected by the hiking trail, but the 11.5-meter-long log cave illustrates the former route of the lava stream and tells you more about the formation of Börzsöny Mountain, which happened ten million years ago.

The tour starts at the parking lot of Királyrét, from where you head to the forest immediately. The total length of the lap is 17.7 km and it can be completed in 6 hours with smaller rests. The total elevation is more than 600 meters with three sharp rises. With smaller children, I would recommend the tour only to Nagy-Hideg Mountain. Or Várhegy lookout tower can be a good option, which I will talk about later. There are no natural water receptions (e.g. springs) during the trail, but you can eat and have a drink in the tourist lodge at an altitude of 834 meters. On Nagy-Hideg Mountain, the lodge also operates as accommodation. Before you go, check the opening hours and changes that may arise due to restrictions. 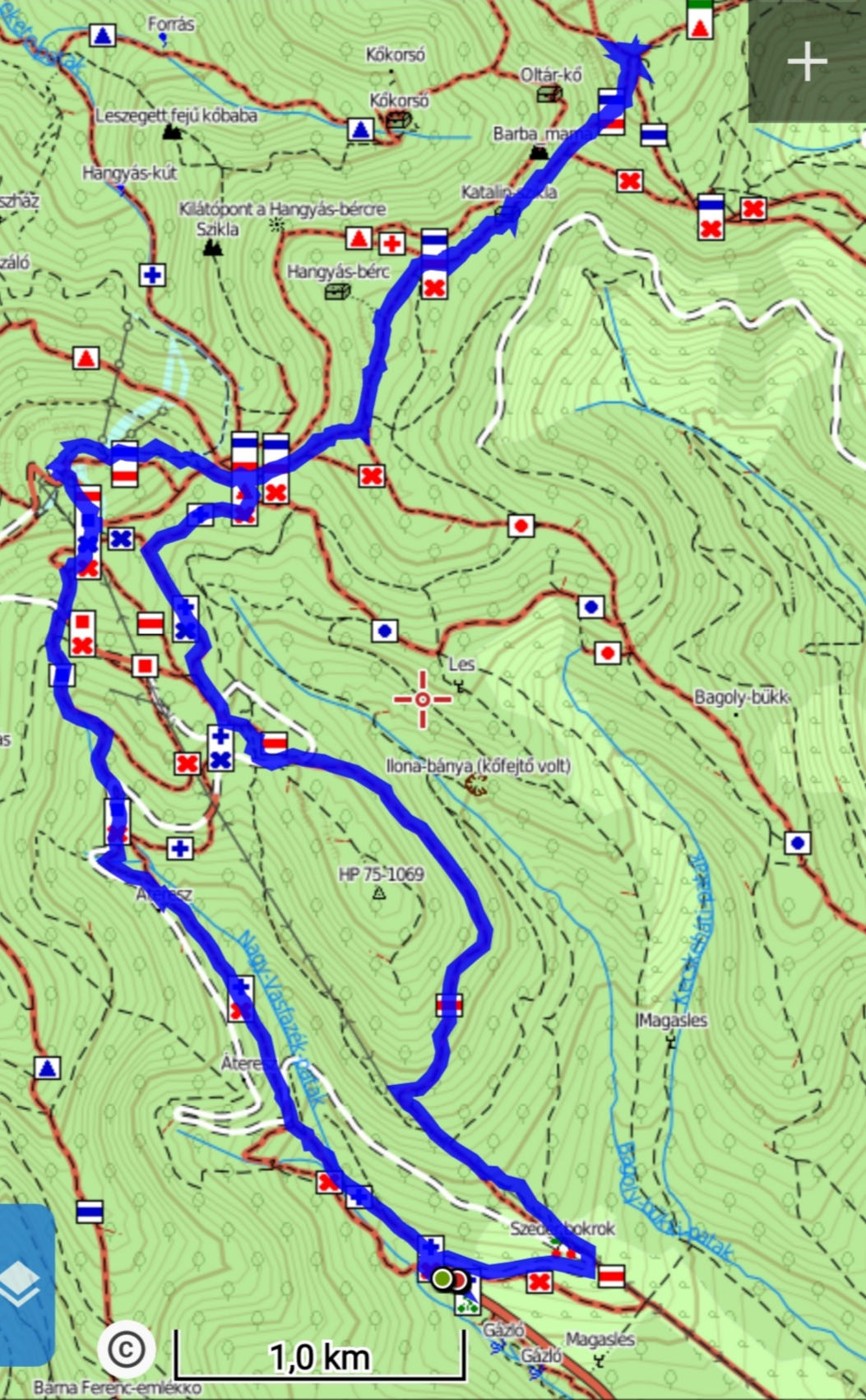 From the parking lot, the trail leads through the blue cross sign. It is a convenient hiking trail through Vasfazék Valley, where your path is lined with a quietly flowing stream. Passing by sky-high trees and cliffs, you reach Nagy-Hideg Mountain on the blue square road. With an altitude of 864 meters, this is the third highest peak in Börzsöny. You will feel the height in your thigh as you climb up next to the ski lift. 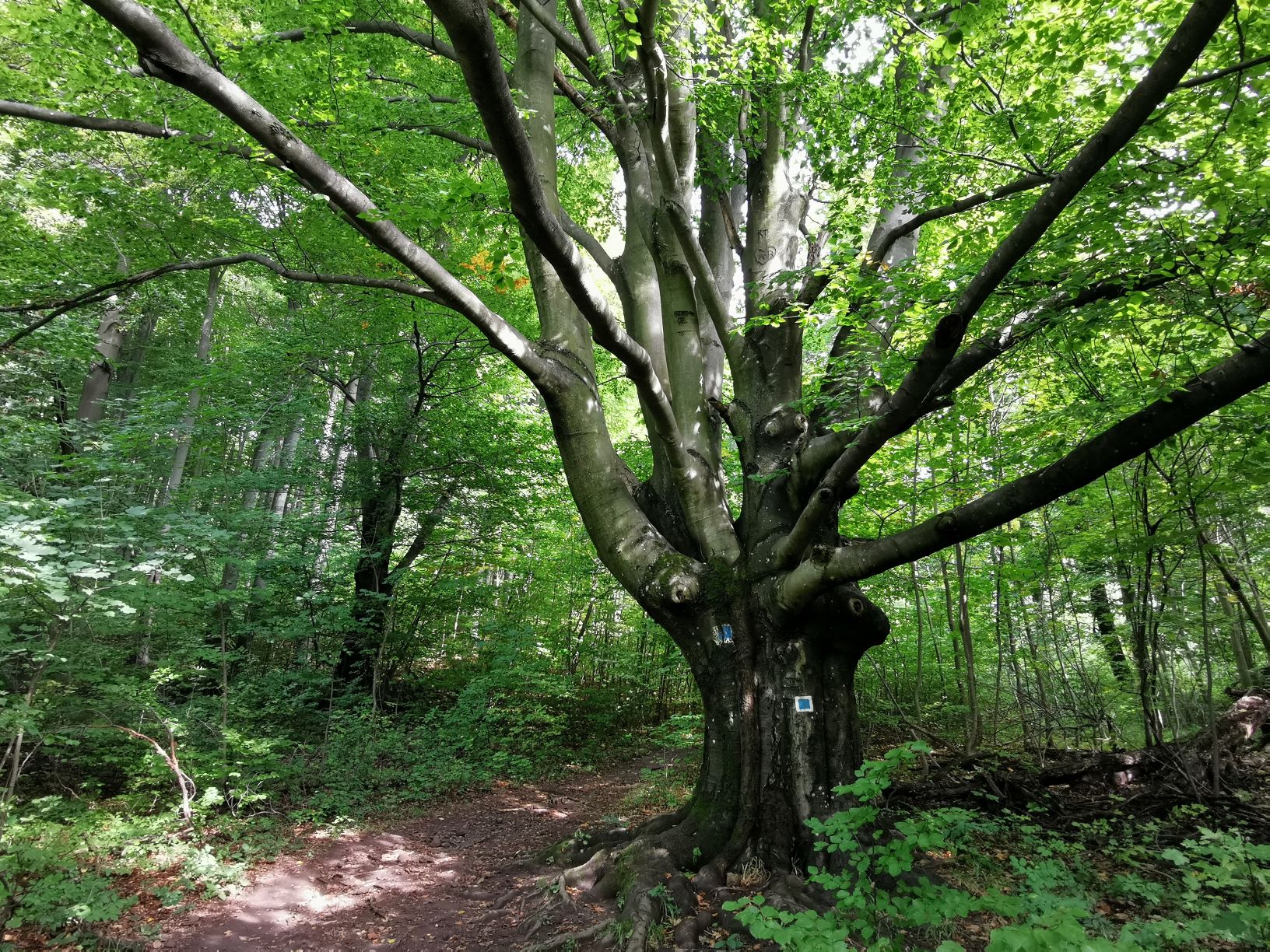 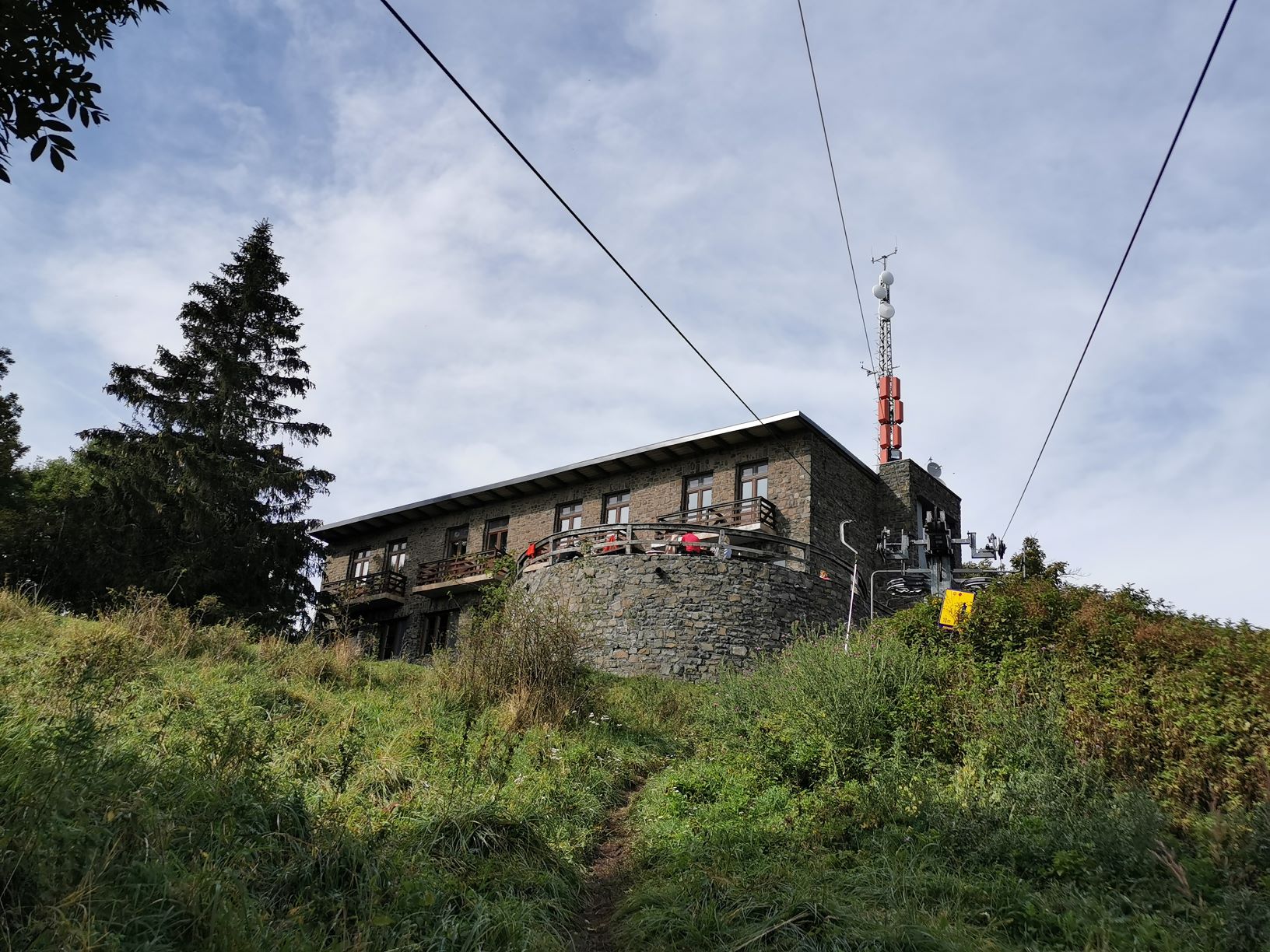 After a sweaty climb, you can relax on the terrace of the rustic-romantic building of Nagy-Hideg Mountain.  Built in the 1930s/40s, the chalet and ski slope have long been a popular tourist destination, while the grassy meadow next to it invites hikers to picnic in good weather. The 864-meter peak of the Great Cold Mountain is also indicated by a concrete pillar in memory of Pál Gyulai. From here you can enjoy a wonderful view of the Pest Plain, Central Börzsöny, and a section of the Danube Bend. 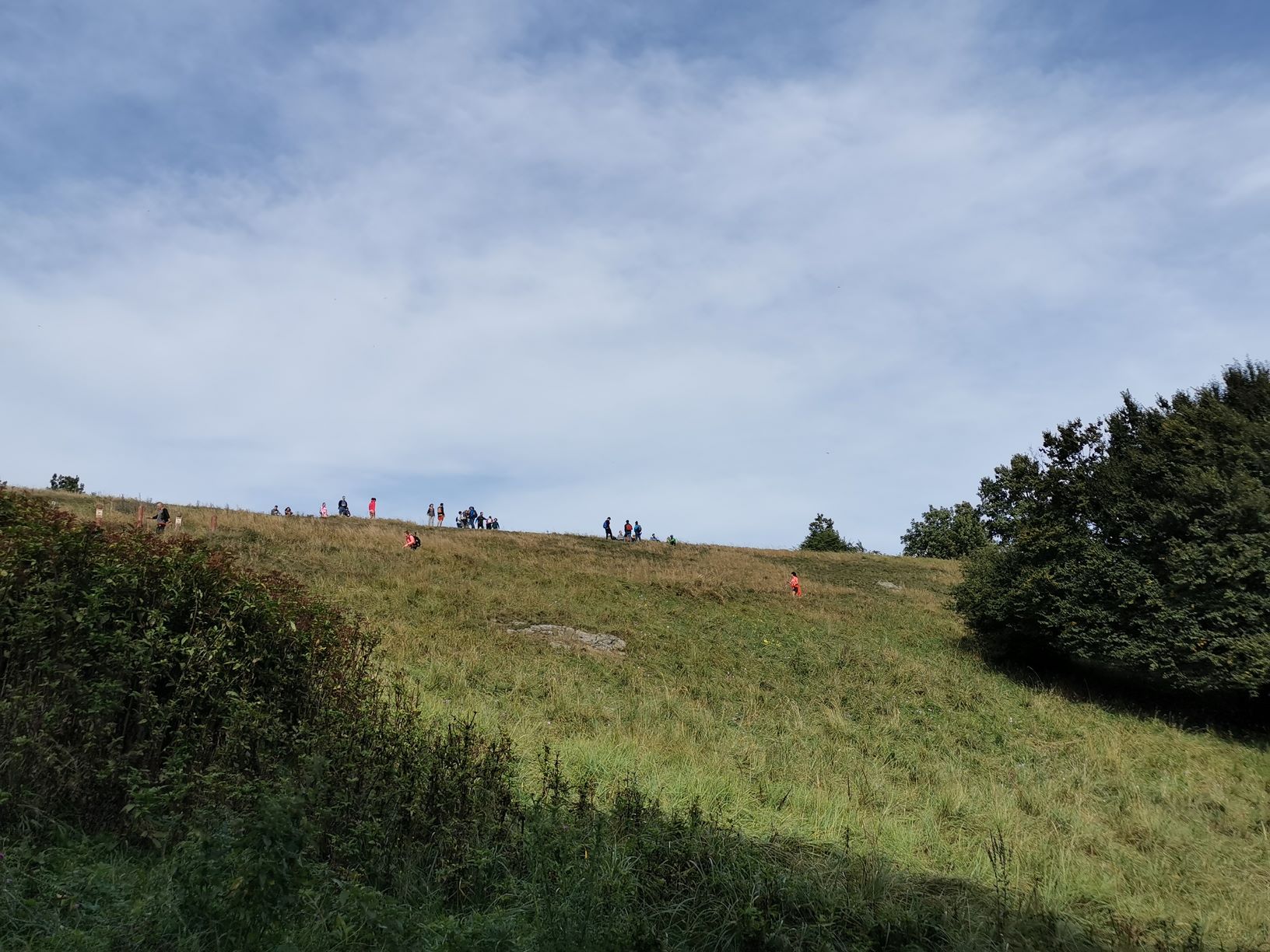 In addition to being a hub for many tourist trails, Nagy-Hideg Mountain has also a uniquely valuable habitat. The southern side is dominated by one of the most beautiful and protected species of the mountain range, and on the north side, there are old bees and rock forests. Continue your journey on the national blue and red sign towards Csóványos. 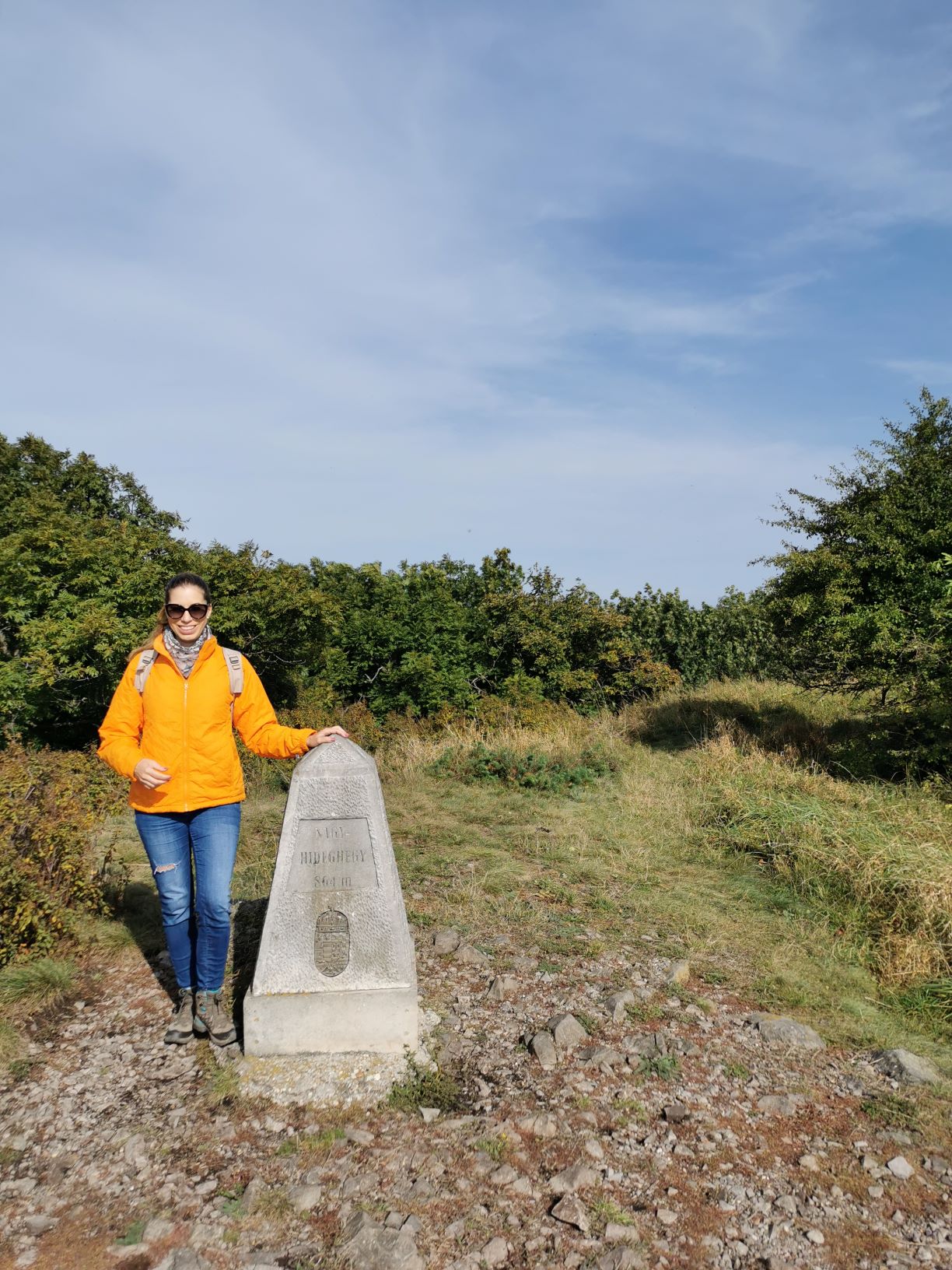 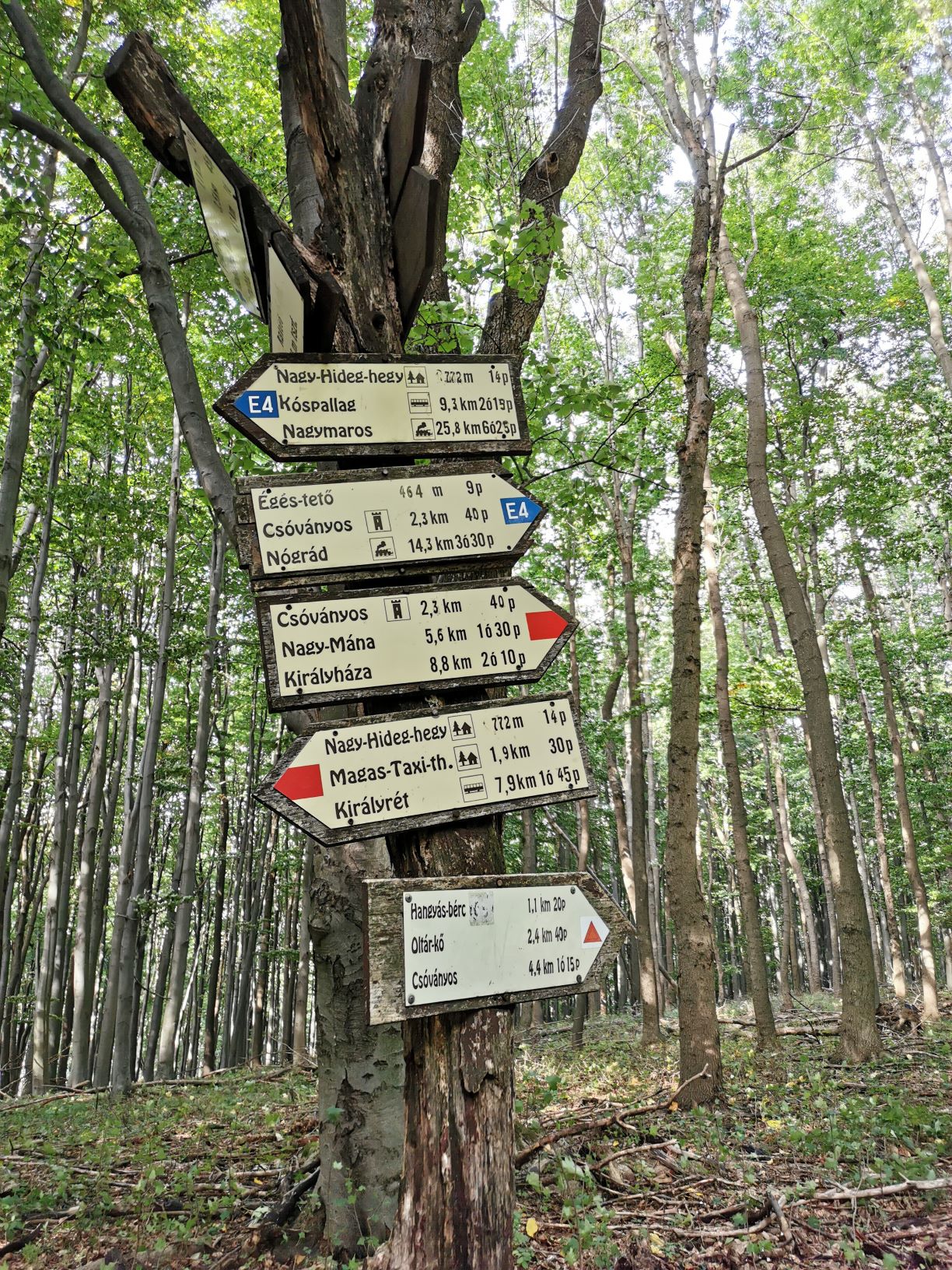 The road to Csóványos leads through a beautiful beech forest and soon continues to a steep wage. On its spine-like protrusion and on its side towards the center of the caldera, bold rock towers and crest-like formations can be seen in several places.

In many places, bowl-shaped holes and canals were engraved on the horizontal surface of the mountaintops by our ancestors. According to Arnold Ipolyi, these places were places of pagan sacrificial ceremonies. But what were people doing at the top of this steep mountain from the Bronze Age onwards? The answer lies in the weather. The climate was wetter than it is now and many springs have arisen in the higher areas of Börzsöny, thus allowing life to be made possible even in relatively difficult terrain. If you are attentive enough, you can still see the signs of prehistoric fortifications around Magosfa (915m). 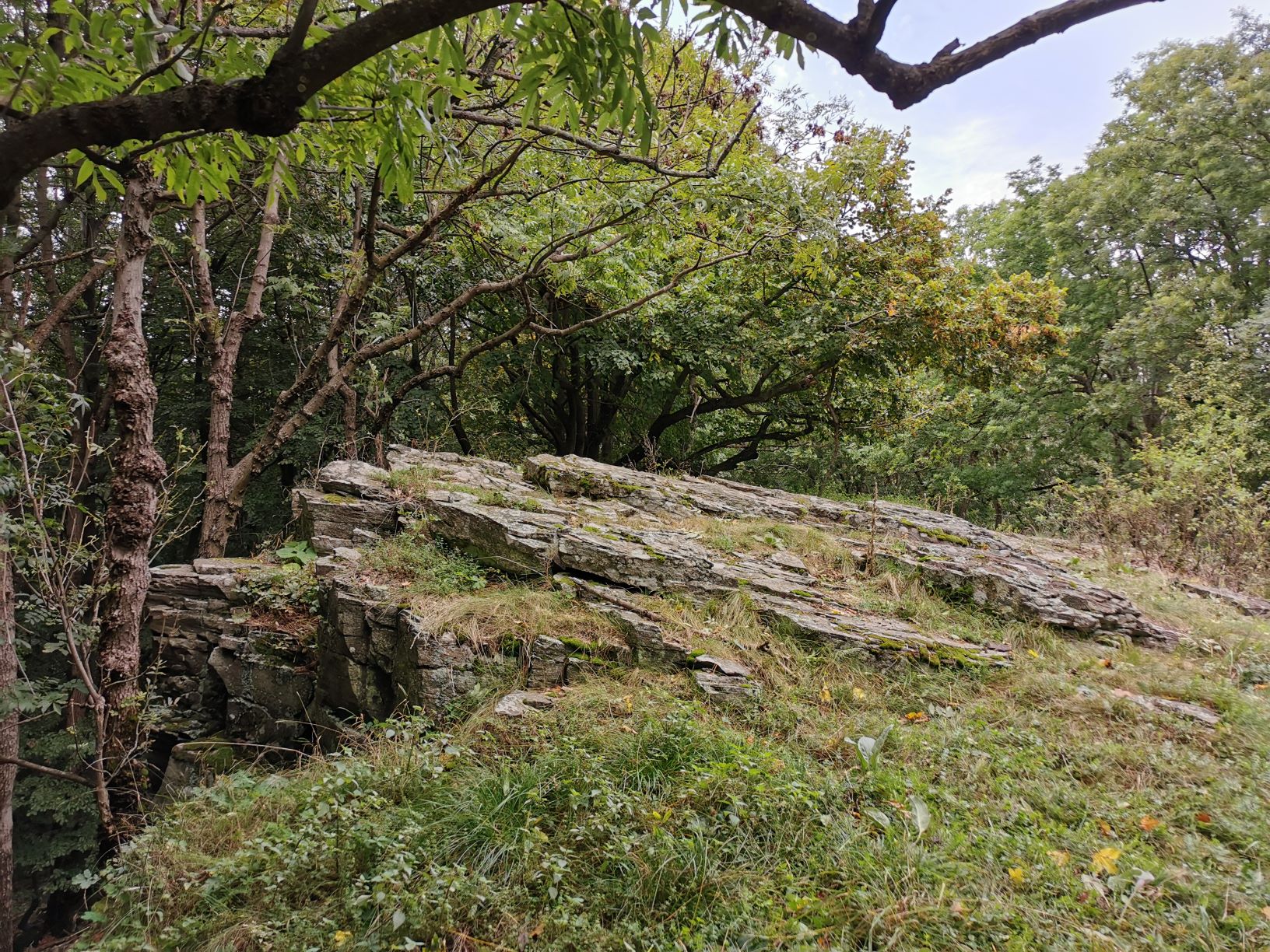 The 938 m high mountain has a special name, that is explained by several theories. According to one version, the name of the mountain derives from the folklore form of the word nettle. The nitrogen-loving, spicy plant is known by Palóc people as csóvány or csovany. The top of Csóványos might have been covered with large nettle field after the trees were harvested, which is also indicated by historical maps. According to others, the origin of the name Csóványos is related to the weather-influencing role of the mountain peak. It’s a popular observation that clouds can often be seen above the mountain. Whichever is true, climbing the top requires quite a lot of thigh work. From Vilma’s Break let’s go one last run to the top.

During the initial period, there was no panoramic view from the top of Csóványos because of the dense, scrubby vegetation. A tower was probably erected at the summit in the 19th century and was used for mapping purposes as one of the 107 geodetic points in the country. Although forest walkers had already been fond of it, the lookout tower was built in 1978 for tourist purposes at the 938 m high peak. What you can see today, this 22,6 m-high steel tower, was released in 2014. 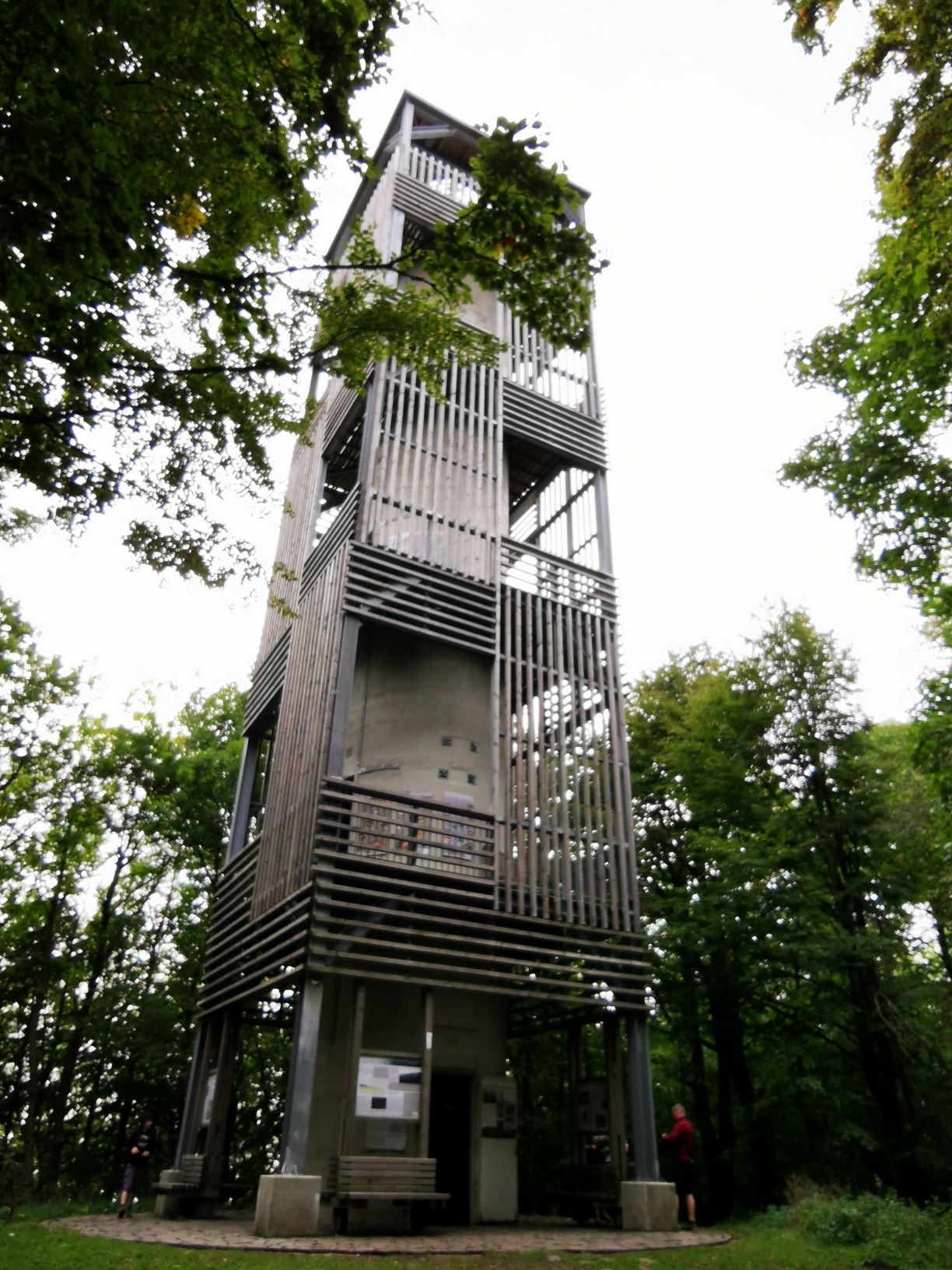 At the top of it, you can enjoy a 360-degree panoramic view. By hiking up 133 steps from the bottom, in clear weather, in addition to Danube Bend, Pilis Roof, Naszály and Visegrad Mountains, the High Tatras can also appear on the horizon. Although I have fear of heights,  it would have been a shame to miss the experience and not to go up for the view. 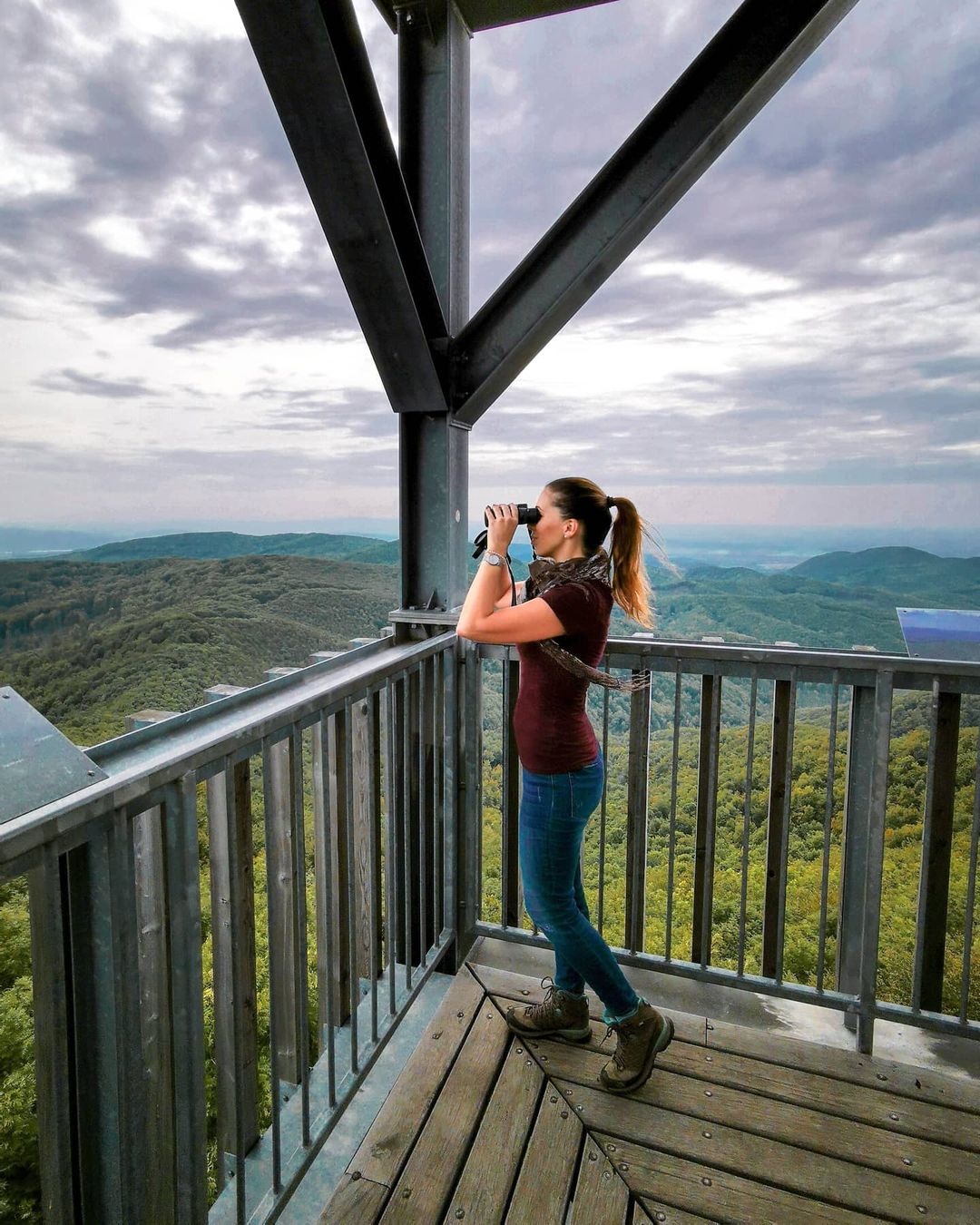 Béke Monument and detour to Királyrét

At the bottom of Csóványos lookout tower, it is worth paying attention to the Peace (Béke) Memorial, which commemorates a strange series of tours. The monument was built from locally collected blocks by nature-lovers as a protest against the First World War and in memory of Trianon. 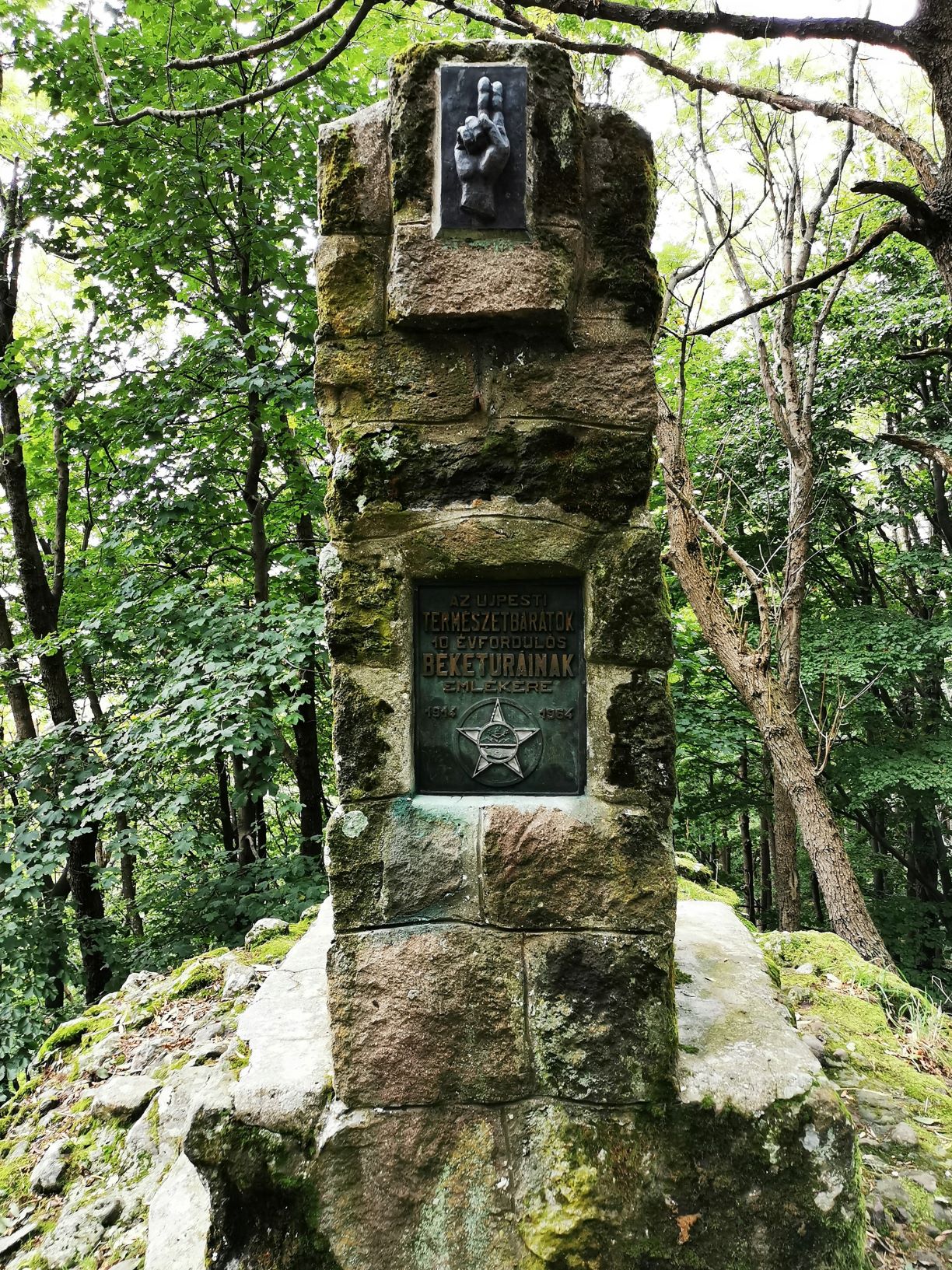 The first tourist trails in Börzsöny Mountain were painted in 1890, but the outstanding period began in the 1920s. The sad reason for that is the peace diktat Trianon. By annexing the most popular tourist destinations of the time, including the High and Low Tatras, the role of Börzsöny, which had rarely visited until then and is relatively close to Budapest was re-valued.

There are several ways to get back to Királyrét from Csóványos, of which we chose the red line sign from Égés Roof. There were no specific sights on the road back except for a huge meadow covered by windflowers. Although I think that after a nearly 18 km hike with three steep climbs, you don’t have to be all the more excited than to get back to the car before dark.

Another “cool” hiking option mentioned in the introduction is Várhegy, which can be an ideal weekend program even with smaller children. The starting point of the tour is the center of Királyrét, while the end is the 359 m high Várhegy on the banks of the Coal (Szén) Stream. Despite the lookout was handed over in the summer of 2020 and has become the protagonist of many billboards, it is not clearly signed how it can be approached. Maybe I was unprepared because, without a signal, I couldn’t even use Google maps. I thought it just shouldn’t be such a complicated task that you stand by a mountain and want to get to the top.

Well, it wasn’t obvious where to start the hiking so I asked for the help of light rail construction workers nearby. Fortunately, some of them had already visited Várhegy, so they knew the way. You should head toward Királyrét light rail station and after leaving some abandoned rails you turn to the forest on the green and yellow triangle sign. You just follow these two signs and after a 30-40 walk you are already at the top of the mountain. 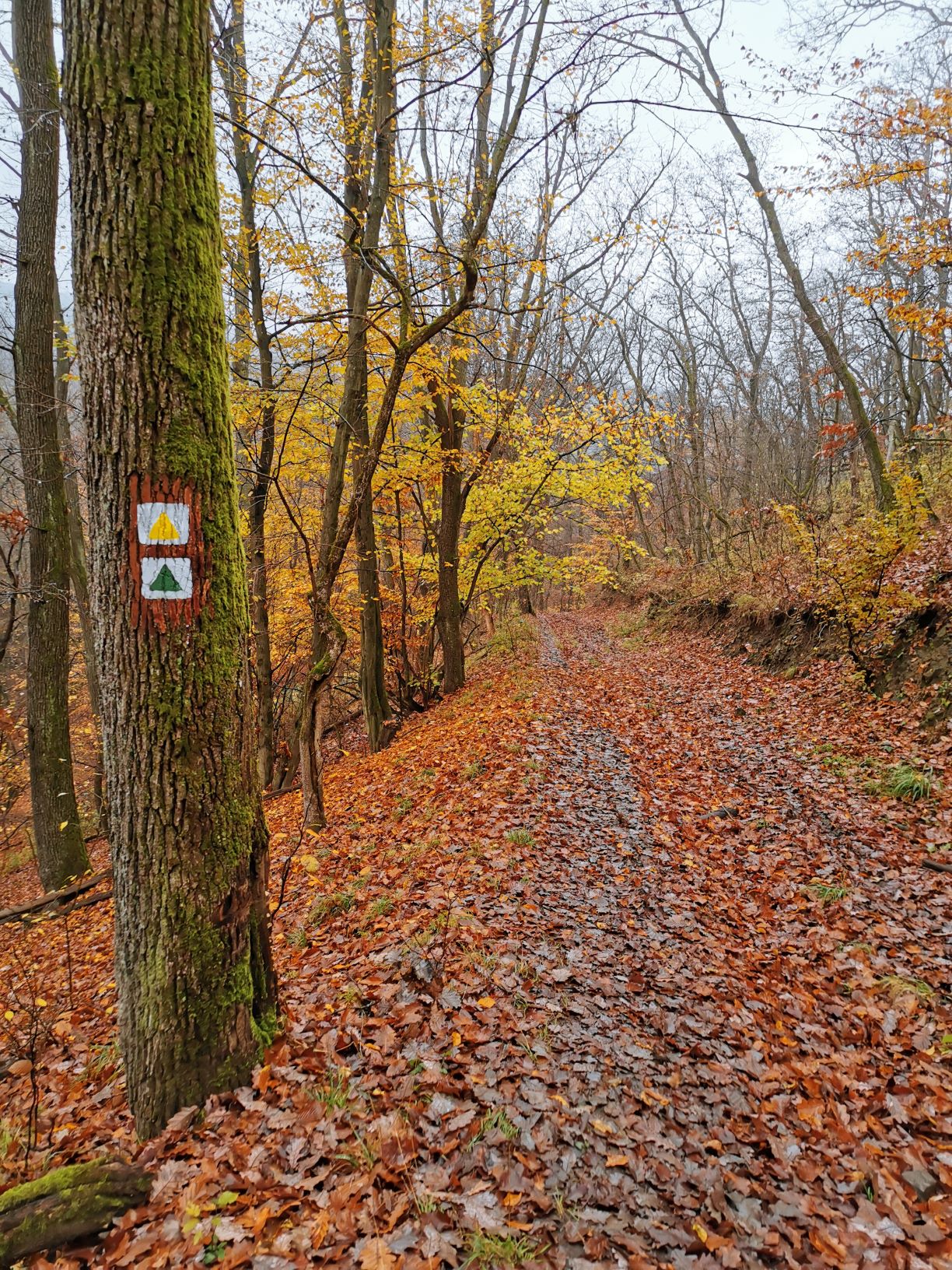 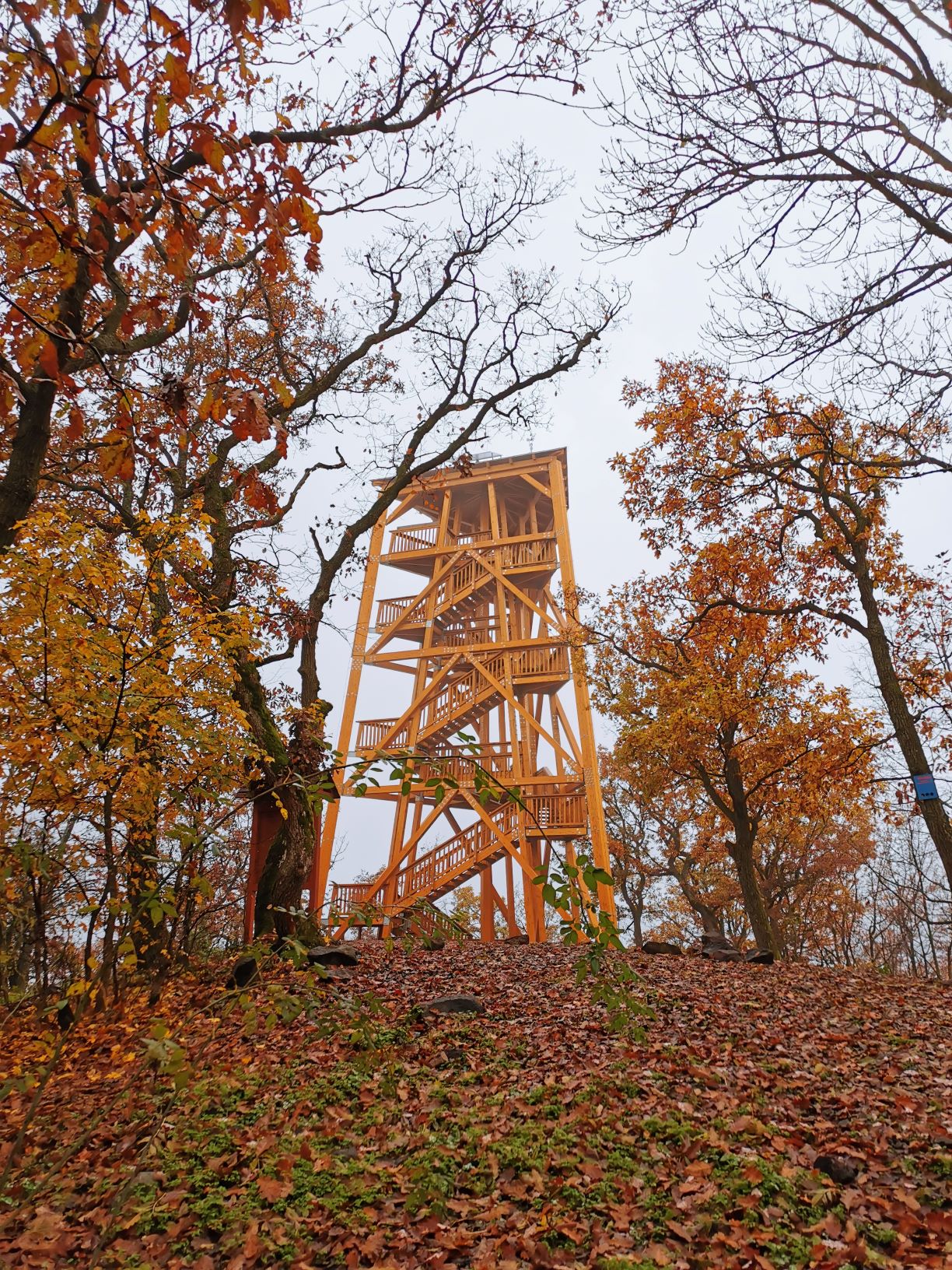 The hill is the home of a 20-meter-high tower made by oak and European larch, topped with 80 steps. The lookout tower features two covered and resting terraces where you can relax and have a break.  From the rooftop, you can enjoy a 360-degree panorama of the Pilis and Cserhát Mountains. Várhegy lookout tower can be a fresh spot for a trip to Börzsöny every season, even in cooler or foggier weather. As the Swedish say, there’s no bad weather, just bad clothes. So let’s go on a trip in winter and be outdoors as much as possible. 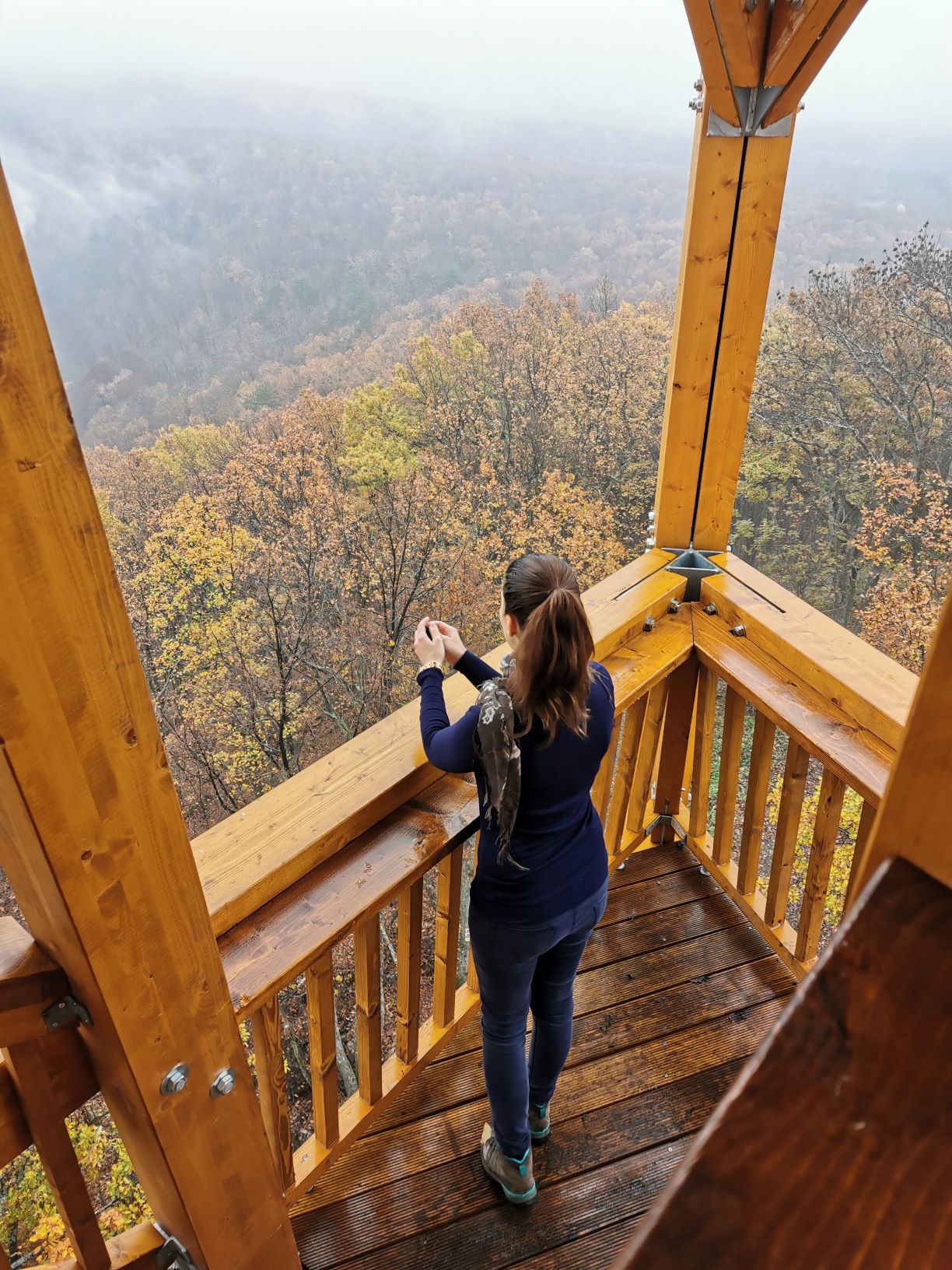 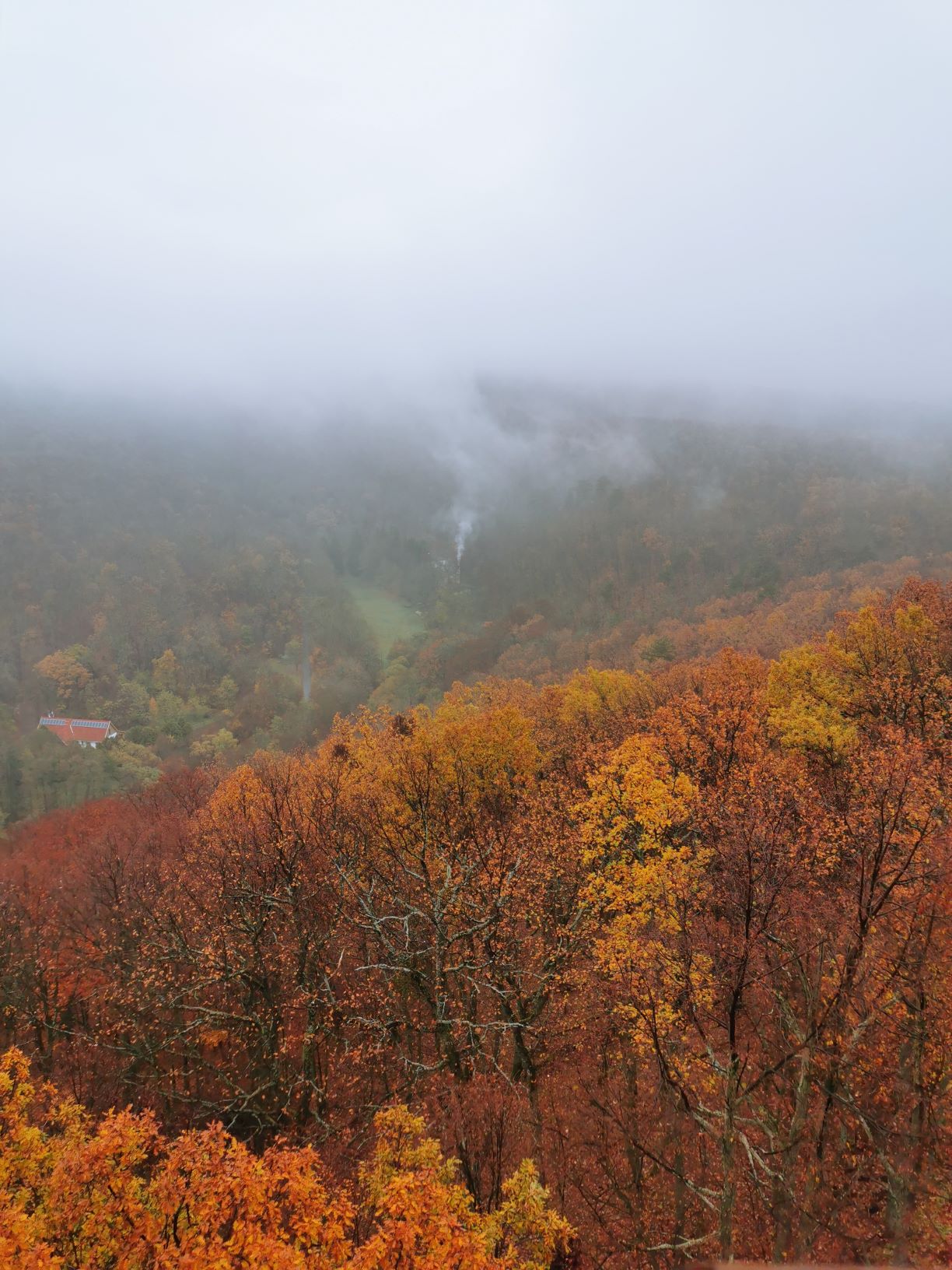