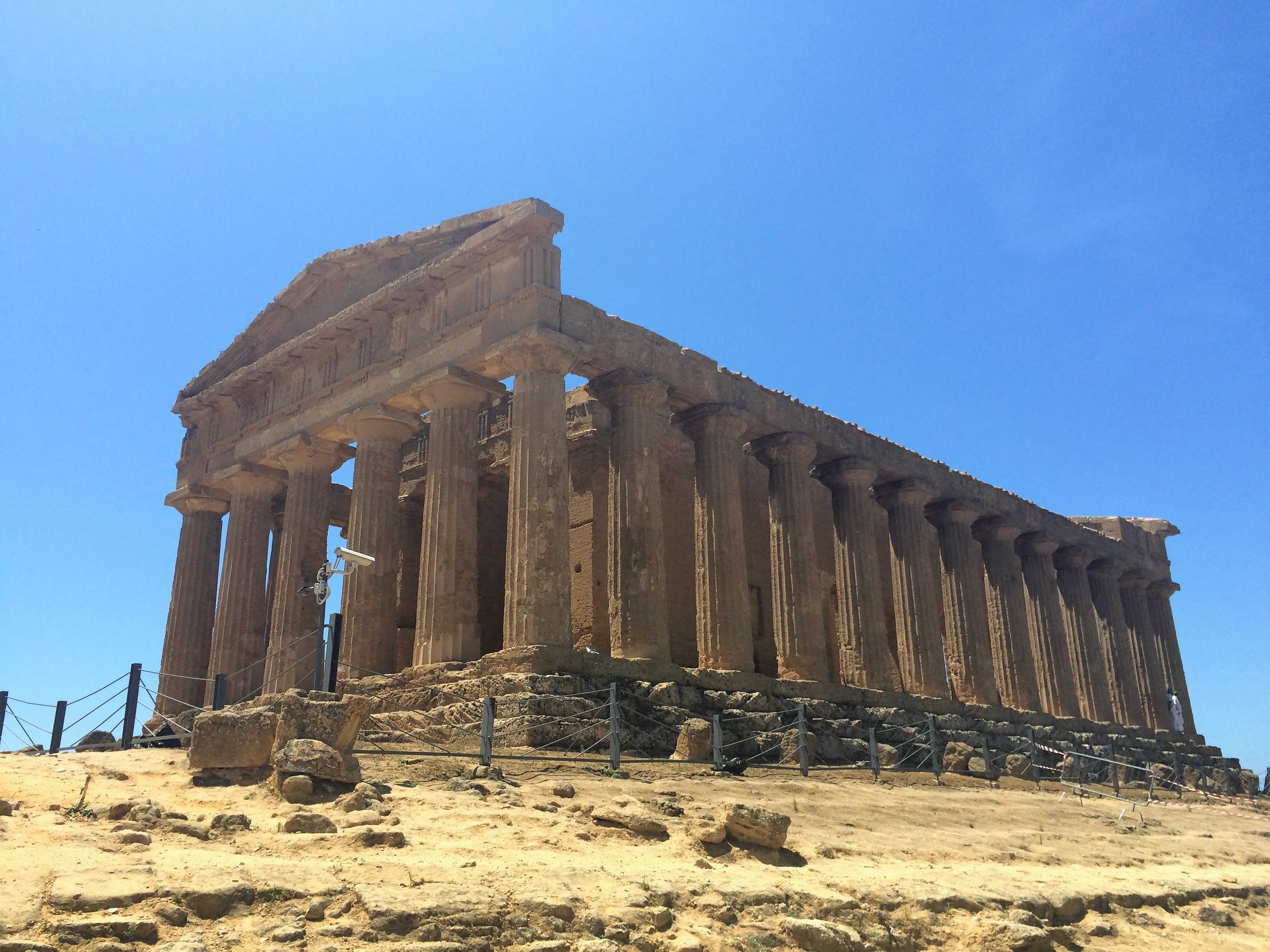 The most beautiful world heritage sites in Sicily

Although neither British scientists nor representative surveys can prove it but most likely if you hear the name of Sicily, one of the following terms will surely come to your mind: mafia, Corleone, Godfather films, Taormina, Palermo, orange plantations, Sicilian red wine , Etna. Roughly these thoughts were also in my head before travelling here. Then I started to read guidebooks what to see on the island, which is almost a quarter the size of Hungary to spend a 10-day roundtrip there. It happened that world heritage sites came to the forefront of my travel to Sicily.

In 1978, UNESCO began compiling a list of cultural and natural sites of outstanding value to humankind for conservation purposes. In its first year, 12 World Heritage sites were added to the list, which now includes 1,092 sites in 167 countries. Within the UNESCO World Heritage List, Italy ranks first with its 50 World Heritage Sites, 7 of which are on the island of Sicily. Let’s see which of these are places of outstanding value to the world and humanity (the years in parentheses indicate the year the listing was made).

Agrigento was founded in the 6th century BC and was once a major center of the Mediterranean Area. Today it is one of the most spectacular archaeological heritage of Sicily and a place of pilgrimage for those who are interested in ancient Hellenic culture. The term Valley of the Temples refers to the 10 churches that were built in the antiquity at this settlement. Among them also stands out the Temple of Concordia (BC 430), which is one of the most beautiful conditioned ruins of the ancient Hellenic churches, if not in the best one. The archaeological site is located in a vast area with little shade and without water supply. Therefore, it is worth scheduling a good 3-4 hour hiking tour in Agrigento in the morning.

Situated at the foot of the Mangone Mountains, the Roman villa was built in the 4th century in a province called Casale, from which the most famous monuments on the island were named after. In the 12th century, as a result of a landslide, the whole villa was covered by mud, and was slowly forgotten that it once existed. Agricultural works were made on the lands for centuries long until columns and mosaics were discovered in the 1850s. This was followed by archaeological excavations that lasted until the 1950s.

Excavations revealed that the villa was once inhabited by a very wealthy nobleman who brought craftsmen from North Africa to decorate his villa. With incredible precision and care, the masters laid the floor of the entire villa with 120 million mosaics on more than 3,000 square meters. If all this were not convincing enough, it’s not only a plain mosaic floor, but beautiful life images depicting the everyday lives of people who lived 1,600 years ago: men hunting, fishing, women playing bikinis! The latter is particularly surprising, as to my knowledge the bikini is a 20th century invention. There are many similar curiosities in the mosaics, so it’s worth visiting the Roman villa in Piazza Armerina near Mount Etna!

The Aeoli archipelago off the northern coast of Sicily consists of 7 islands: Panarea, Stromboli, Vulcano, Alicudi, Filicudi, Lipari and Salina. They are all under World Heritage protections due to the fact that they were created as a result of all volcanic activity, far from the coast, in the 200m deep water. For volcanologists and scientists, these islands provide a wealth of information and knowledge that is why the Aeolian Islands were inscribed on the UNESCO list in 2000.

I visited the island of Stromboli and admired the operation of the legendary volcano from land and road. The Stromboli volcano is still active, constantly puffs (live webcam here) and sometimes also shoots red glowing lava. From the sea you can see the red glowing lava that completely the side of the volcano. The crater can be reached from the other side of the island with a 3-hour walk tour. Durable boots are highly recommended as the ground is slippery and crumbly! If you don’t feel like climbing a volcano, you can just relax on the black sand beach and bathe in the crystal-clear indigo-blue Mediterranean Sea.

In the south-east coast of Sicily lies the town of Noto, which was completely destroyed and had to be rebuilt after the great earthquake of 1693. The restoration of all buliding was done in the Sicilian Baroque style, which results in the same appearance of the surrounding cities of the region (Caltagirone, Militello Val di Catania, Catania, Modica, Noto, Palazzolo, Ragusa, Scicli). These settlements commemorate the European flourishing of Baroque architecture, that is why the area has been inscribed on the World Heritage List. Noto stands out among the cities, but Caltagirone is also worth a visit, I wrote about this in an earlier post (you can read here).

The town of Noto lies on a limestone plateau, from where the yellowish, easily carved sandstone was taken, from which the whole town was rebuilt after the earthquake. You can walk between monumental and beautifully decorated buildings that are so unique and look like a movie scenery. No coincidence that Noto is a popular destination for those who are interested in history and architecture. Another interesting sight of the city takes place at summer, when the Via Rocco Pirri promenade is decorated with huge flower petals pictures. The initiative, called Arte in sali … ta, always draws attention to an important topic and the donations are given for charitable purposes. This year, the focus was on eradicating illiteracy.

According to Cicero, Syracuse was the largest and the most beautiful Hellenic city in the ancient times. Its most notable sights include the Temple of Apollo, a Roman amphitheater and the ruins of an ancient Greek theater. The latter was a huge disappointment for me after Taormina. A podium and stands were placed on the original theater ruins, the place completely lost its authentic character. I understand that modern technology is needed to hold open-air theater performances here, but it was a very disappointing and not a proper preservation of an ancient theater. The city of Syracuse, along with Pantalica belong to UNESCO World Heritage Sites, with 5,000 tombs carved into a rock wall. Most of them are inaccessible and were made in the 7-13 centuries B.C.E.

Due to its outstanding geological, scientific and cultural value, Etna is well deserved a UNESCO heritage. Although it was a surprise for me that it was listed just in 2013. Located at the highest point of the island (3350m), Etna is the main attraction of Sicily and one of the most active volcanoes of Europe. It last came into operation in the spring of 2017, when people living in the mountain villages of Scassau had to be evacuated with an exclamation, but ten still suffered minor burns.

Although nearly 20,000 people were killed during the eruption in 1669, Etna is not a dangerous volcano at all. The eruptions were often accompanied by earthquakes, so the deaths cannot be attributed to the lava that flows for almost 1 month long. Rather the accompanying earthquakes are dangerous that cause the collapse of houses.

Today ten thousand of people visit the volcano each year to reach the altitude of 2,900 meters by cable car, from there they approach the central crater of Mount Etna on foot or by SUV. The volcano itself and its associated hillside are surreally beautiful: everything is black and crackling beneath one’s feet. The solidified lava rocks look like a moon terrain however, life makes its way, with yellow flowers and smaller bushes that are visible everything under the cable car on the hillside.

7. Arab-Norman Palermo, Cefalú and the Cathedral of Monreale (2015)

The youngest Sicilian World Heritage Sites were inscribed on the UNESCO list in 2015. Palermo was the capital of the largest island in the Mediterranean Area and the coronation city of the former Kingdom of Sicily. During the history the city was under countless powers (Phoenicians, Greeks, Romans, Bourbons), resulting in a very multicultural community where Christians, Orthodox, Muslims and Jews lived side by side peacefully over the centuries.

Historically, the Norman Kingdom of Sicily in the 12th century is considered the Golden Age, from which magnificent buildings remained for us as a socio-cultural syncretism between Western, Islamic and Byzantine cultures. Because of this heritage, two palaces, three churches, a cathedral and a bridge, and the cathedrals of Cefalu and Monreale have been added to the UNESCO list.