Explore Historia Valley, the most hidden corner of Borsod County

There are many parts of the country that are popular places from travelling point of view. You can see them advertised on billboards and lure us on a journey with their idyllic surroundings. If I ask anyone on the street where he would travel in Hungary, I bet in a big amount that Borsod wouldn’t be in the top five. Not even that Tokaj wine region and Bükk Mountain are in this county, which are a real mushroom paradise (here you can see why). Not to mention Bodrogköz and the beautiful castles and natural wonders of Zemplén, which I wrote about here and here before. The second biggest county of Hungary, Borsod-Abaúj-Zemplén is at the end of the world in many eyes. But for me, it is my homeland. 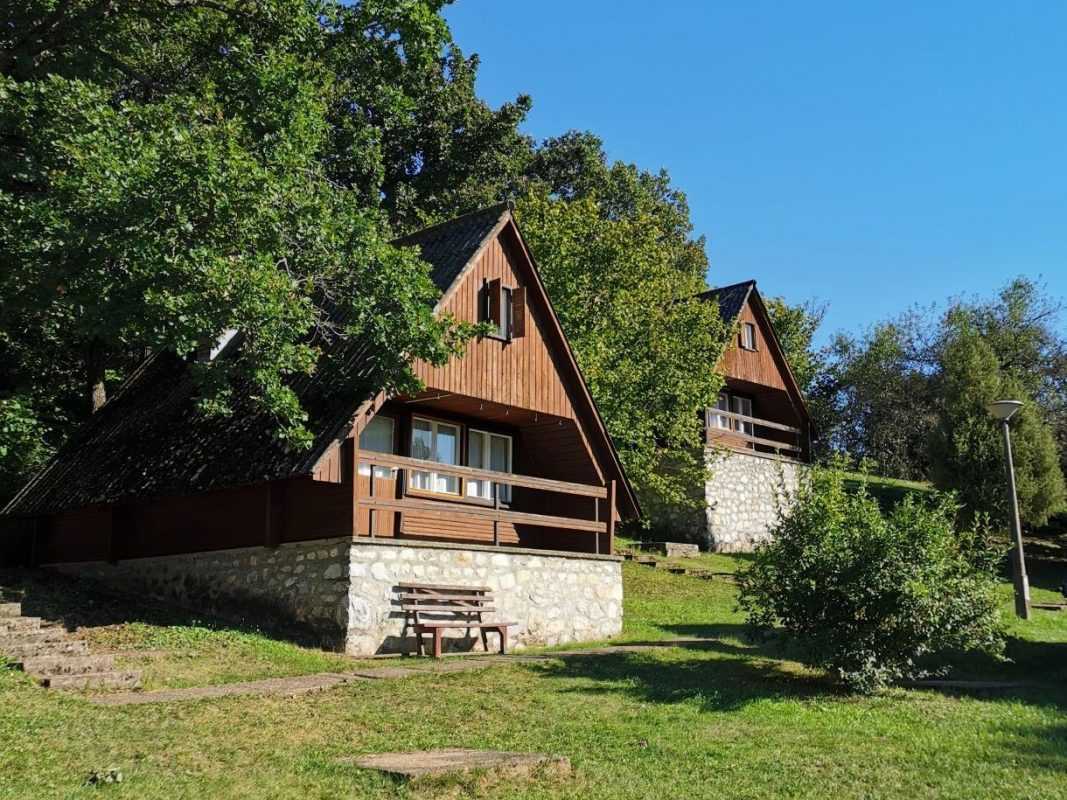 Now that, due to the coronavirus, foreign travel is not recommended for a while I think there is also a place for regions on our domestic bucket list that we would not normally think of. Just as Borsod, which is so far from everywhere and is poor. But for those who are open for the least popular places the region offers plenty of amazing attractions and special experiences. On an autumn day, I visited the small area nearby Bódva River, called Historia Valley, from where I brought you my favorite places as a source of inspiration.

L’Huillier-Coburg Castle, not easy to pronounce it, is the seventh biggest castle in Hungary. Its wrought-iron gates are designed after  Belvedere, and its main façade evokes Italian palaces. In terms of its appearance, it is interesting that while the U shape of most Hungarian castles curves forward and spans a nice park, in case of Edelény Castle the U faces backward. Inside the castle, you can find the largest rococo wall painting in the country, pinned with mythological figures and allegorical Baroque and Rococo scenes praising the handiwork of wandering painter Ferenc Lieb. Thanks to the renovation in 2014, a secret was revealed. A walled window in the east tower room was discovered, which was built before 1820. Today Edelény Castle awaits visitors in a beautifully renovated form, with themed exhibitions and with a cartography room.

If Rudabánya at first reading means nothing more than the name of a mining settlement, I will give you a little help: Rudapithecus. Hearing this name, many people are likely to remember something from the history classes, notably that this is where a famous archeological finding came from. The bones of our ancestor, who was a 10 million-old ape were found here. After the settlement, the finding was named Rudapithecus Hungaricus. Followed by further excavations, the results now can be viewed in the monumental Rudapithecus Gallery that can be visited by people with reduced mobility too. Apart from the archeological exhibition, the gallery offers panoramic views of Rudabánya’s number two landmarks, namely the mining lake.

On the Internet, there are many images about this place, which, in sunny weather, with its emerald green waters, is a truly eye-catching sight. Although I got to the deepest mining lake in Hungary before sunset, which is a byproduct of iron ore mining in the Rudabánya, I found the lake very beautiful even without filters. By the way, you should not bathe in the lake itself, as there are many underwater rocks that can cause injuries. Rather, let’s admire from above the beautiful trio: steep cliffs, green vegetation and water.

The settlement of fewer than 200 people along the northern border hides one of the most protected monuments in Hungary. The church complex on the hilltop at the highest point of Tornaszentandrás is a real, special delicacy. Its eastern part is based on Romanesque foundations, its wall pictures and frescoes are from the 14th century, while its furnishings combine the folkish Baroque elements. The church can only be visited upon prior check-in. When I parked the car next to the cemetery, I saw an old man walking up the hill. It turned out to he is the key-keeper. What a coincidence and luck. 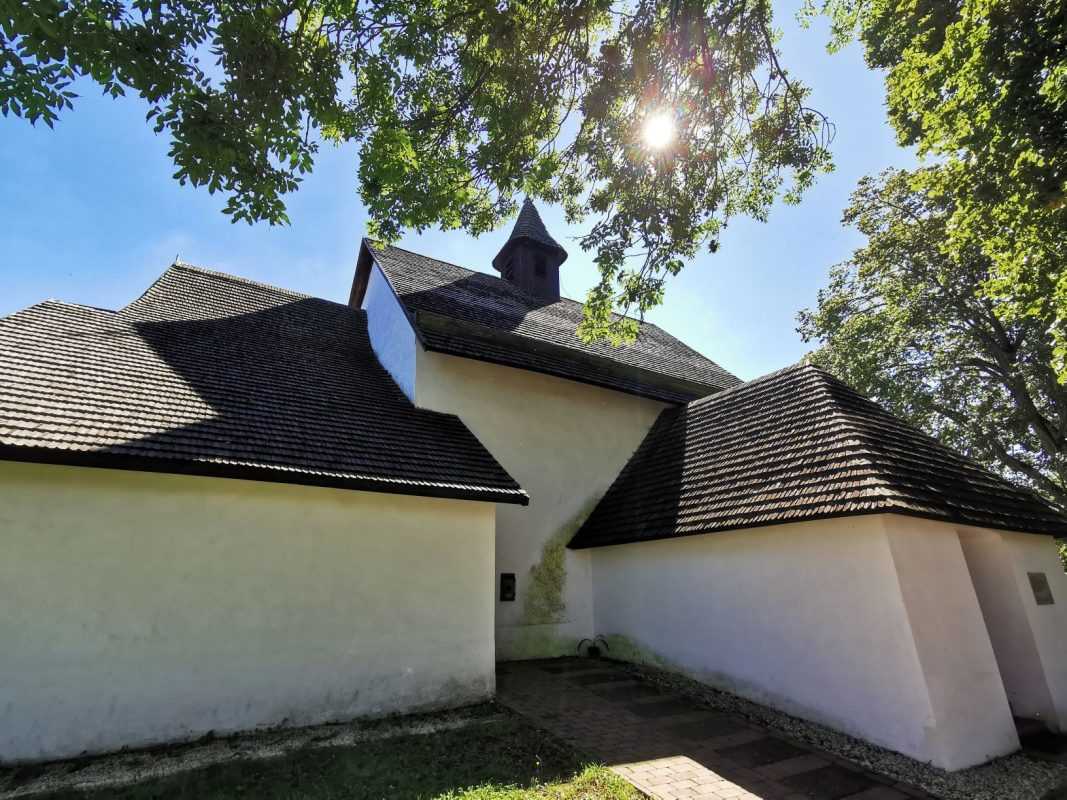 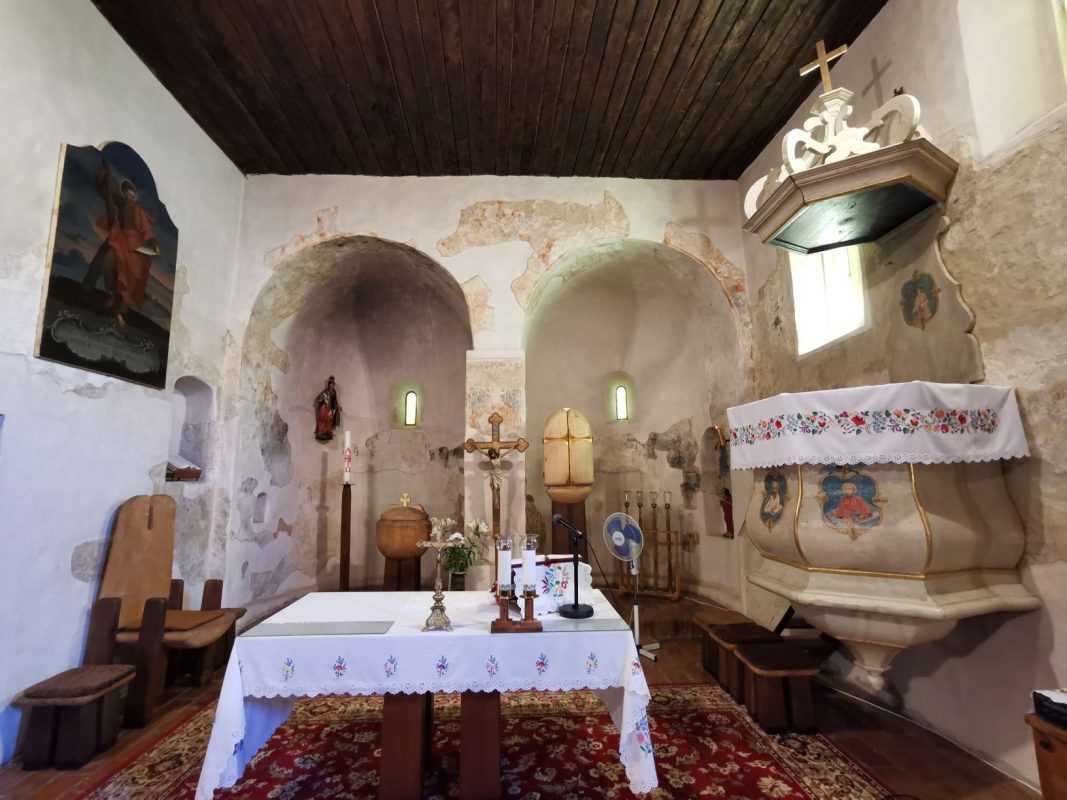 Entering the building, an unusual sight greets the visitor: a twin holy hall. The special architectural style is due to the miners from south Tyrol who settled here in the 1100s to extract iron ore and brought with them the institution of the double sanctuary. Under one arch of the twin sanctity, you can see the statue of St. Borbara, the patron saint of the miners, while the other hides the patron saint of the church, St. Andrew.

The church burned down in the 1700s and was without a roof. To preserve the building from further damages the walls were painted white. As a result, the 14th-century frescoes remained hidden and they were only rediscovered during the restoration work in 1970. And the result was astonishing: the legend of St. Andrew appears on the frescoes together with St. Laszlo king. There are very few depictions of St. Laszlo left to us, so the figures on the arc of triumph have an outstanding value from an art history point of view. The baroque altar, the cassette ceiling and the gallery of the church are just “icing on the cake”. I promised the man guarding the church that I will tell the people about this temple miracle. And now I have done so. I think this special church should be seen by everyone it’s amazing.

In addition to Tornaszentandrás, the Historia Valley and the region of Bódva still hide many interesting religious buildings. Like the temples of Boldva, Szendrőlád, Rakacaszend and Szalonna. The latter stands out from the range of attractions and not only because of the interestingly sounding settlement name. Szalonna (it means bacon in Hungarian (is not named after the popular pork product, but after the saltwater spring near it. In Slavic, solna means salt, which, when a few letters are used, is just szalonna. 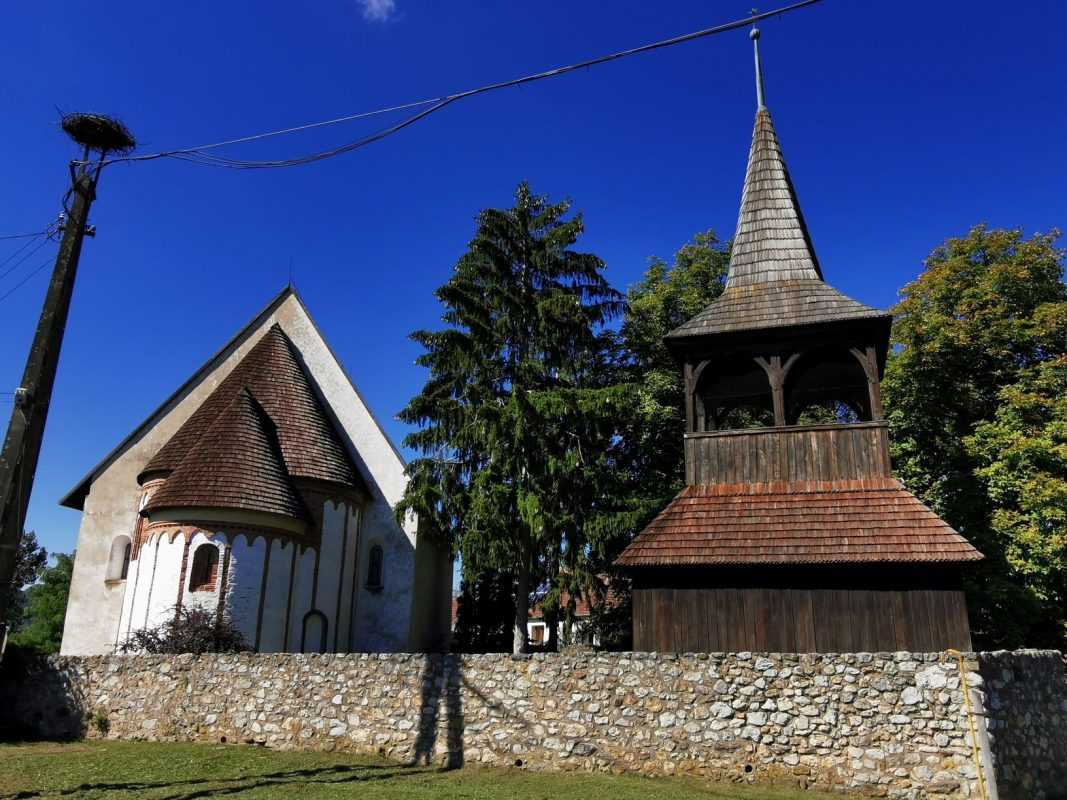 The circular church, which is the center of the village, dates back to the Arpad-era and was built in the mid-12th and 13th centuries according to the characteristic Romanesque architecture style. The Turks ravaged the church and later whitewashed the colored walls. Fortunately, due to renovations in the 1970s, murals were also found here together with the frescoes, which I unfortunately could not see. The church key, as in the case of Tornaszentandrás, must be requested separately. But here in Szalonna, it was written out on a piece of paper that the church would not receive visitors in the upcoming three days, so I had no chance of getting in. Next to the church there is an 18th-century Baroque wooden bell tower, which together with the main building, is surrounded with a medieval stone wall.

The most famous stalactite cave in Hungary, which has been visited for centuries, is Aggtelek. In fact, the cave system called Baradla-Domica covers a 25 km-long underground complex, some of which lie in Slovakia (5 km) and the other part rests in the Hungarian area. The cave, which has been a UNESCO World Heritage Site since 1995, has two natural entrances: Aggtelek and Jósvafő. 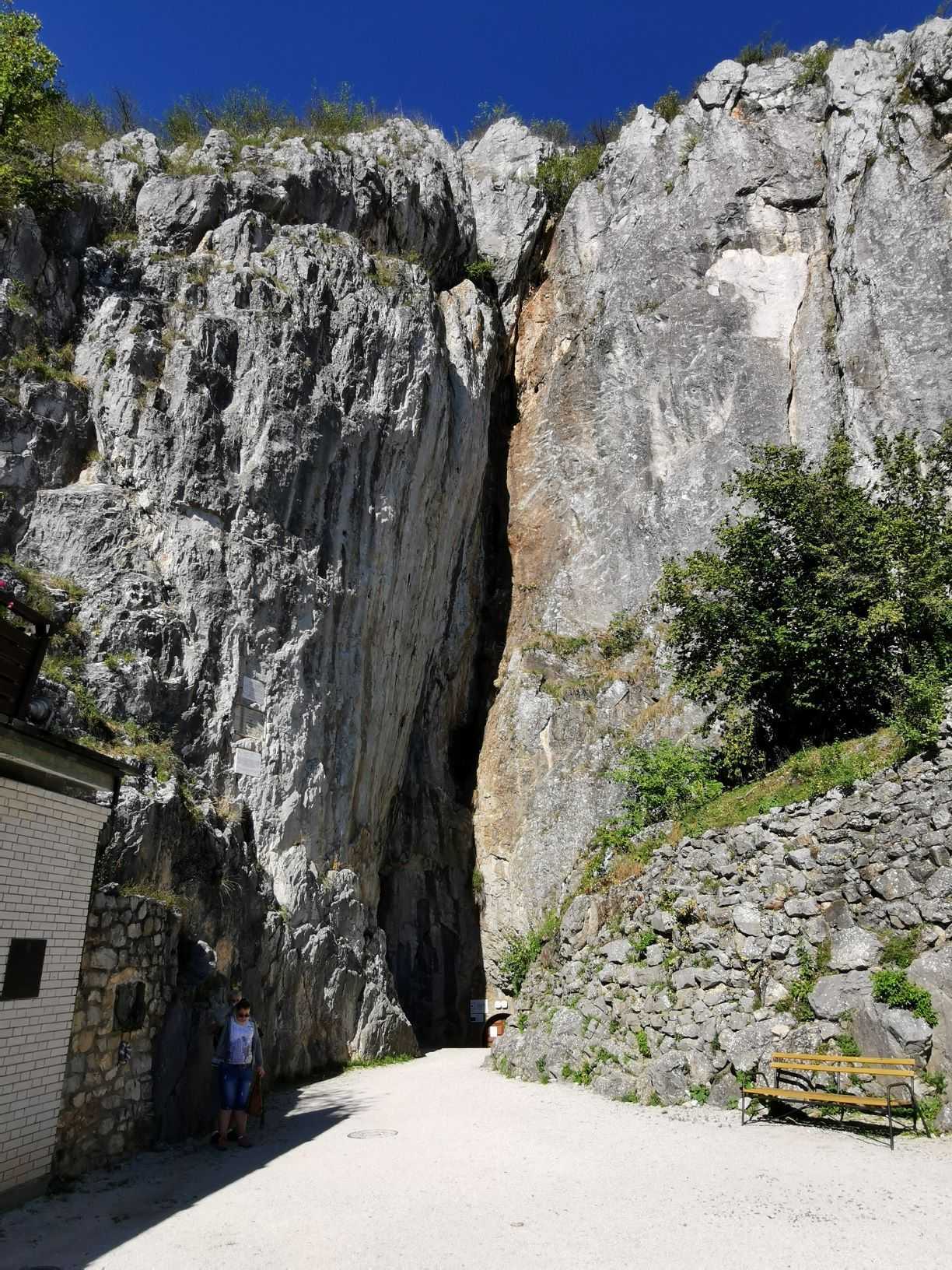 The cave is open to visitors every day of the year, and there are five hiking trails to choose from.  The short tour of Aggtelek and Jósvafő and Red Lake covers a whole length built-out terrain, which can be comfortably completed in street but warm attire. The more adventurous tour is with caving equipment and there are two options to choose from. There is a five-hour-long tour from the entrance to Aggtelek, which ends after 6.65 km at Jósvafő. This can be optionally supplemented by the wet passages of Retek cave system. 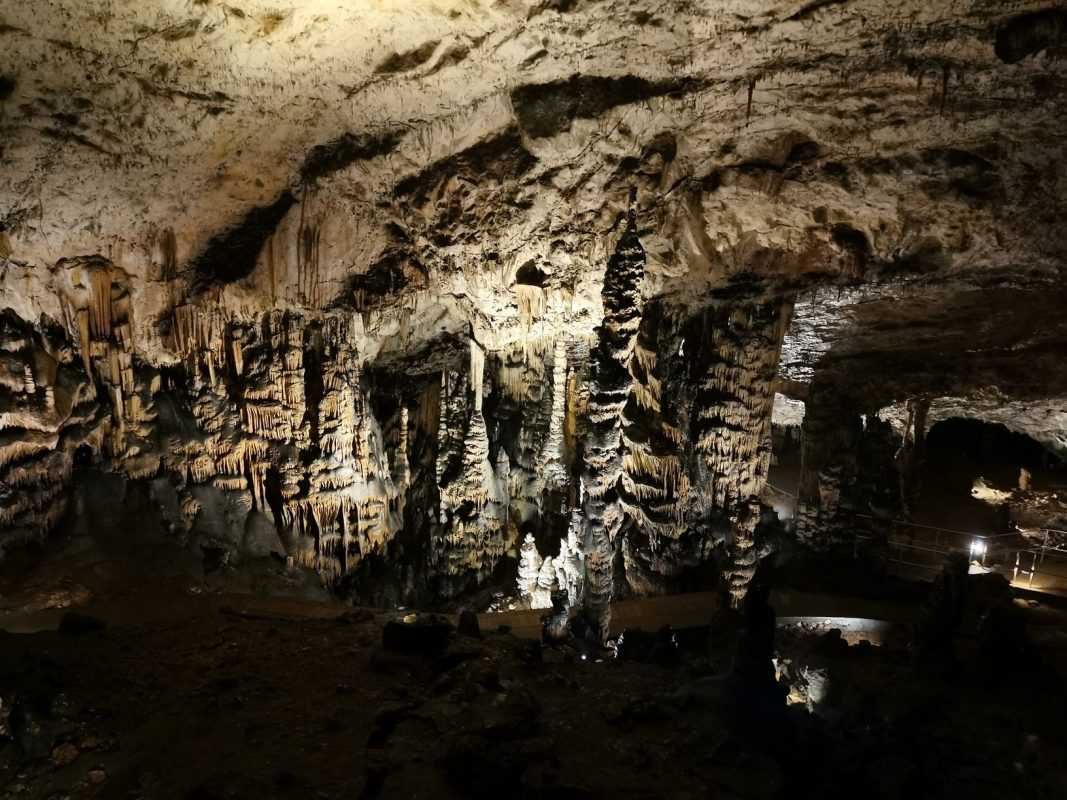 I chose the easy Aggtelek tour, which is 60 minutes long and includes the main attractions like the martyrs of Arad, the Concert and the Column Hall. Given that the Aggtelek stalactite cave was led with torches until the 1970s, soot left its mark on the otherwise snow-white and orange columns. Interpreting the words of the tour guide, if you want to see less “touched” stones in completely different shapes and sizes, you should try out the Jósvafő cave. 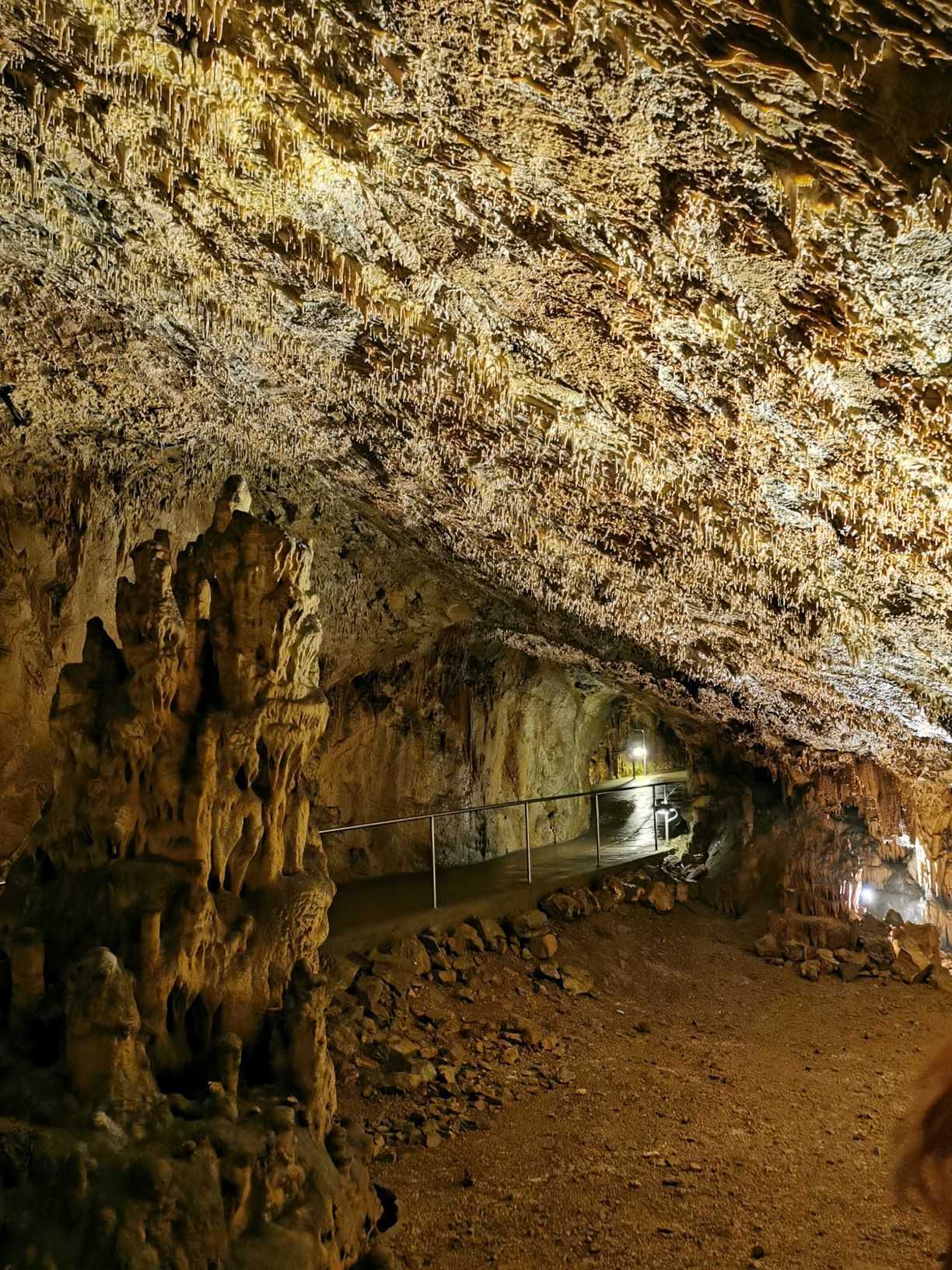 In the depths of Martonyi forest, a monastery of the Hungarian Pauline is hidden from the eyes. The location can only be reached by car for a while, but after you need to walk 1.5 km until the monastery. It’s worth walking as it is the best-preserved monument of the only Hungarian-founded monastic order. The construction of the monastery began in 1347 in Gothic style.

The total length of the one-boat church is 26.5 meters, the monumental character of which has been well preserved despite the ruined state. At the same time as other monasteries in the area, the Martonyi Pauline Monastery became uninhabited after the 1550s. Since then, it has been constantly destroyed until its renovation began in 2001. The building has been completely covered, so the interiors and beautifully preserved triumphal arch are protected from further deterioration caused by the weather. Although I have seen several forest monasteries before, the Martonyi version has come close to my heart only because of its size and not-so-easy access. 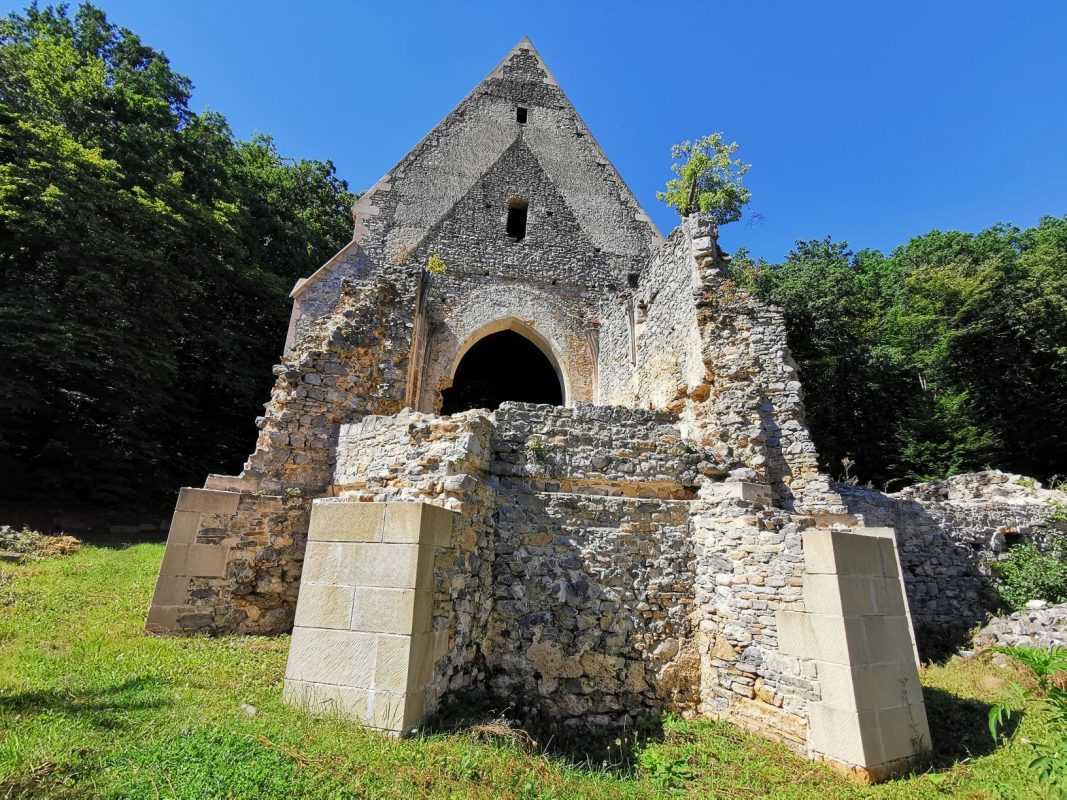 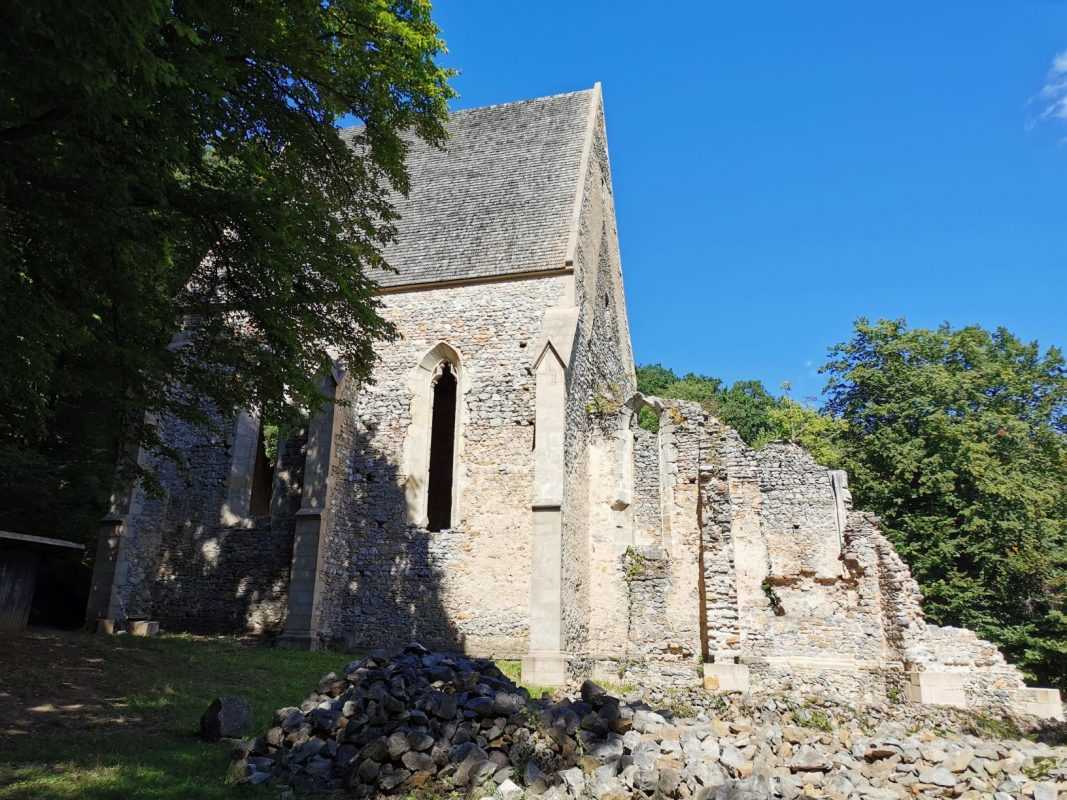 On the way back, as soon as you get out of the woods, the glittering surface of the Rakaca water reserve will be in your field of view. It is worth walking along the shores of the picturesque lake, which is not only the largest artificial reservoir in Hungary but also a paradise for camping and fishing. 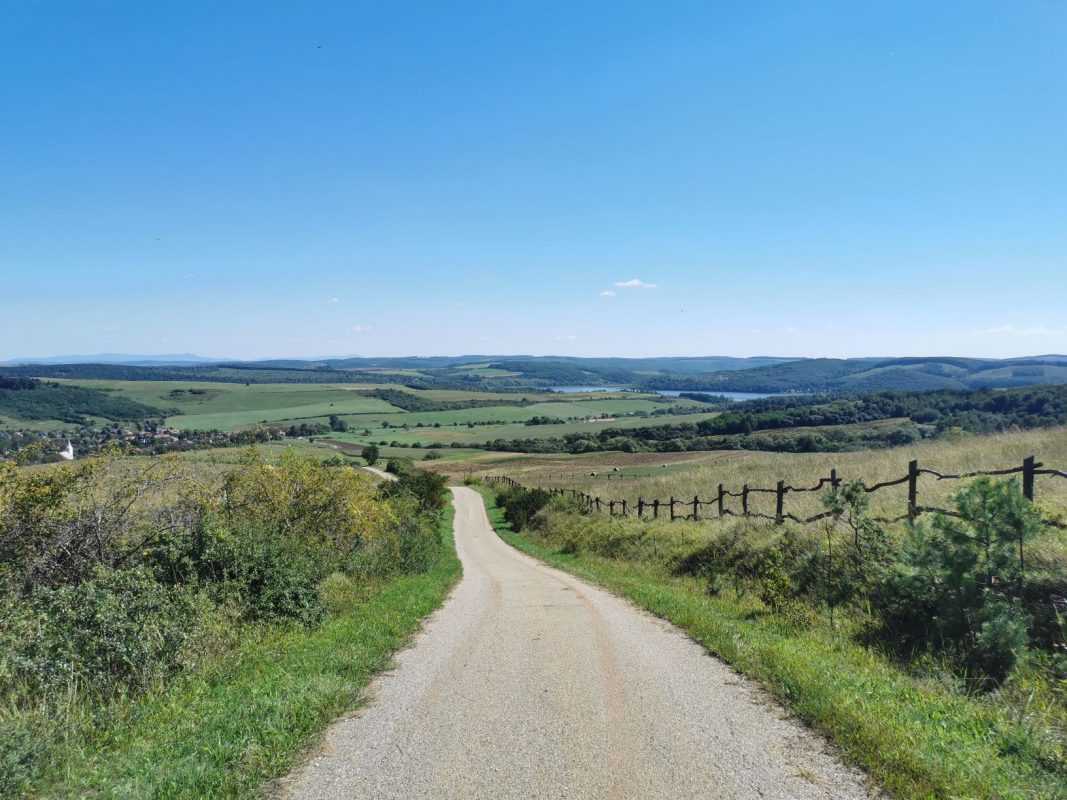 There are many old castles in the vicinity of the River Bódva. Some of the buildings are now used as a children’s home, while others host a cultural center or library. Most buildings erected in the late Baroque era would benefit from a thorough renovation and cannot be mentioned on the same level as Edelény Castle. But if you love castles and can relate to their slightly ruined charm, you will find real treasures here, such as Hadik’s Castle in Tornanádaska, Balassa Castle in Ragály, or Csáky Castle in Szendrő. 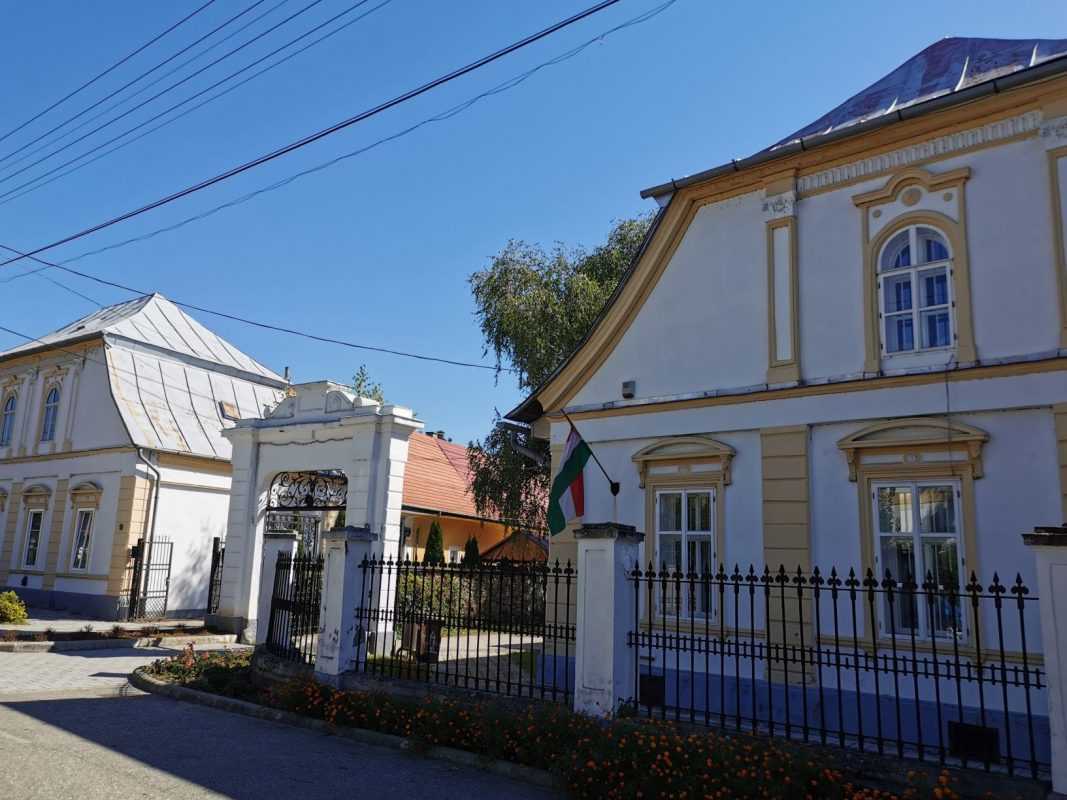 In addition to the stalactite cave mentioned earlier, it is worth visiting the forests near Aggtelek for other reasons. In Jósvafő, among the trees, there is a small lake of beautiful color, known only as a tarn. In fact, it is not a tarn, because it was not created by a glacier, but only by a tiny spring, Jósva. However, let us not underestimate it, despite its small size. This source is of the highest water flows of Hungary, which takes shape in addition to the lake in a beautiful waterfall. The 7-8000 liters of water per second provided ideal conditions for the operation of a watermill, which also supplied electricity to the village after 1917. 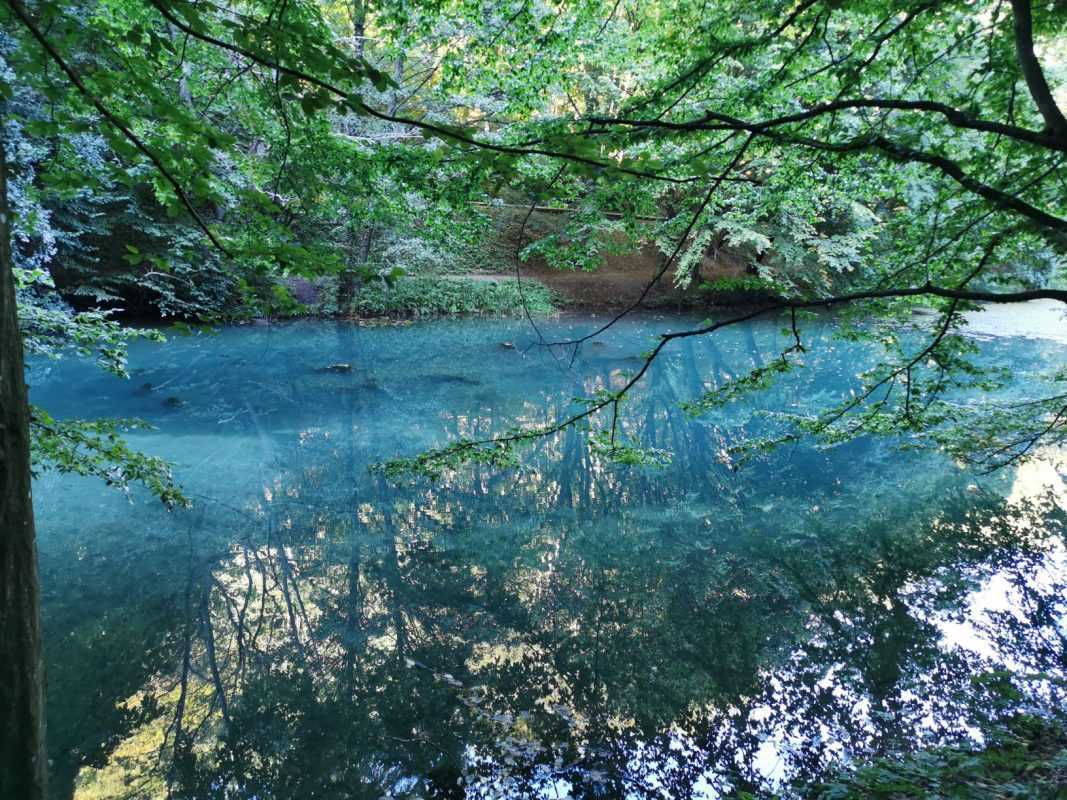 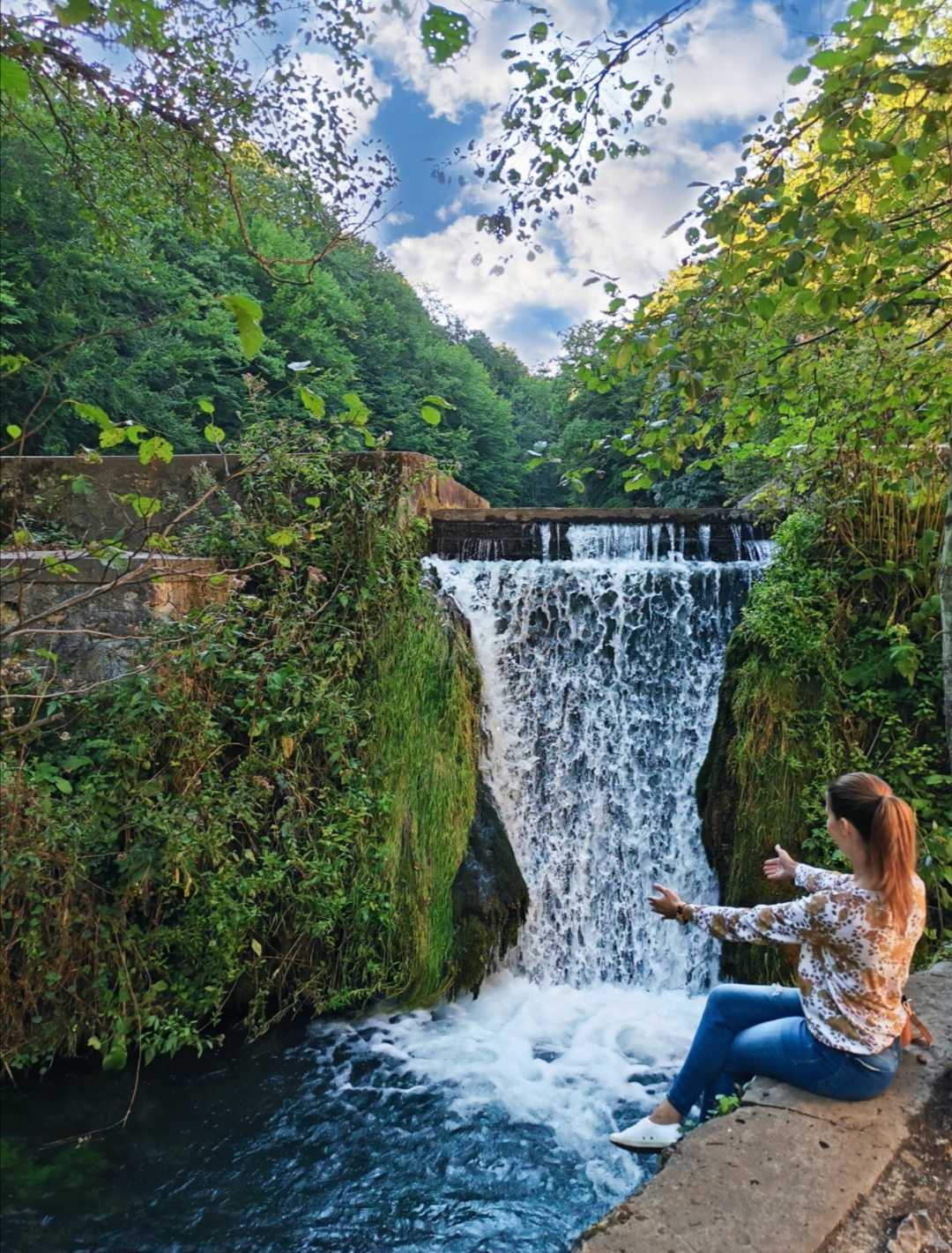 Today, the mill is no longer there, but instead, there is a lake with beautiful water, which, with its wild-novel environment, can be the perfect destination for a light forest walk. Walking around Jósvafő, active hikers should visit Szádvár, which now covers only a forest castle with a wall. Or you can even stay in Jósvafő and get known the famous Hucul horses, which are also called Carpathians ponies due to their small size.