Many adjectives can be used for this small Slovak settlement. You could say it’s an enchanted fairy tale village in which every house looks like gingerbread or a lace perfection. One thing is certain: it is difficult not to have a word for these specially painted houses in Cicmany, which, due to their traditional character, have been declared cultural heritage protection in Slovakia since 1979.

When I planned to visit the village, all I knew was that its main attractions are the painted houses. I expected there will be some houses here like in an open-air museum. I thought we will run through the village quickly and continue our way to Szulyó Mountains. The plan turned into several hours of village watching.  As there are not one, not two, but nearly 140 gingerbread cottages here. Plus, these houses are all different, and they look just like they just came out of the Hansel and Gretel tale. The difference is, you don’t have to worry about an evil witch living in them. Or do you? 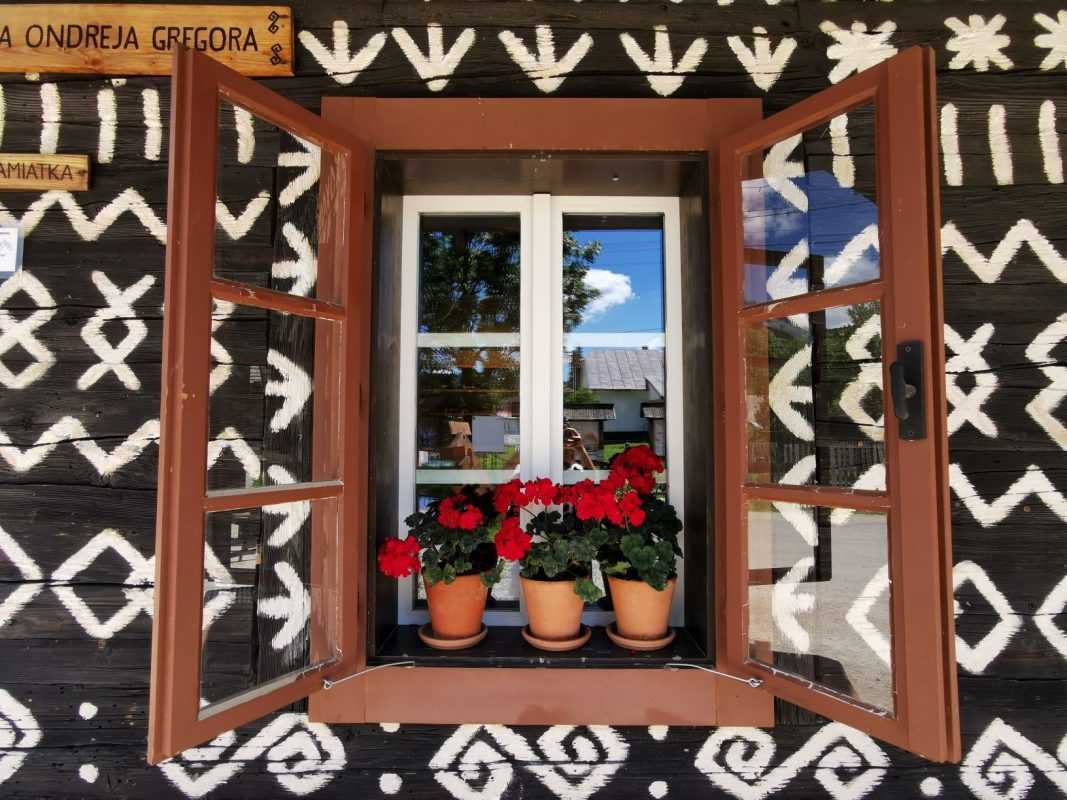 Cicmany is located in northern part of Slovakia, in the embrace of the Rajcsanka Valley and Sztrázsó Mountains. This is the highest settlement in the county of Zsolna (655 m) and its environmental beauty strongly competes with its built heritage. Cicmany’s name was first mentioned in the writings in 1272, but there is quite a lot of uncertainty about its founding. Some sources tie it to the name of the Turóczy family and date its creation to the 14th century. While others say it was founded by the Bulgarians. The latter is confirmed by a legend that in 1410 Bulgarians arrived here, fleeing the Turks and found a new home in this valley. Although they left their old language, but they preserved their folklore art, which took shape in the buildings of Cicmany. 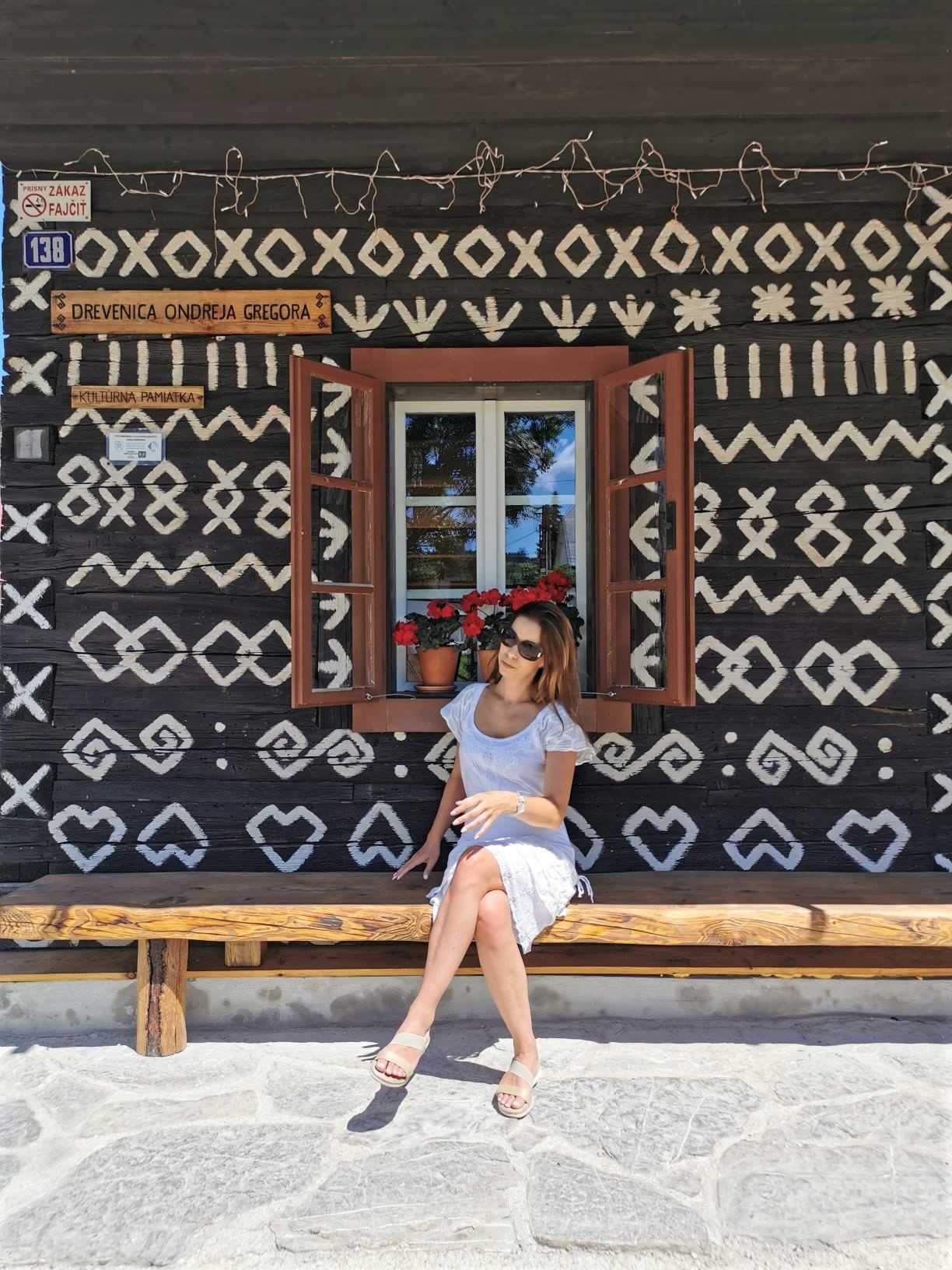 Origin of the painted houses

The white paints on the dark walls give Cicmany its extraordinary charm and attractiveness, but it was not always the case. At the end of the 18th century, the art of painting began to “come into vogue” and it didn’t serve decoration purposes as you can see today. Wooden beamed houses were extremely vulnerable and used calc to seal the defects in the wood, as well as to protect the walls from rotting. Later, the repairs were cleaned with different patterns, and for the sake of a uniform village image, a 24-element geometric and plant sample library was later made of them. 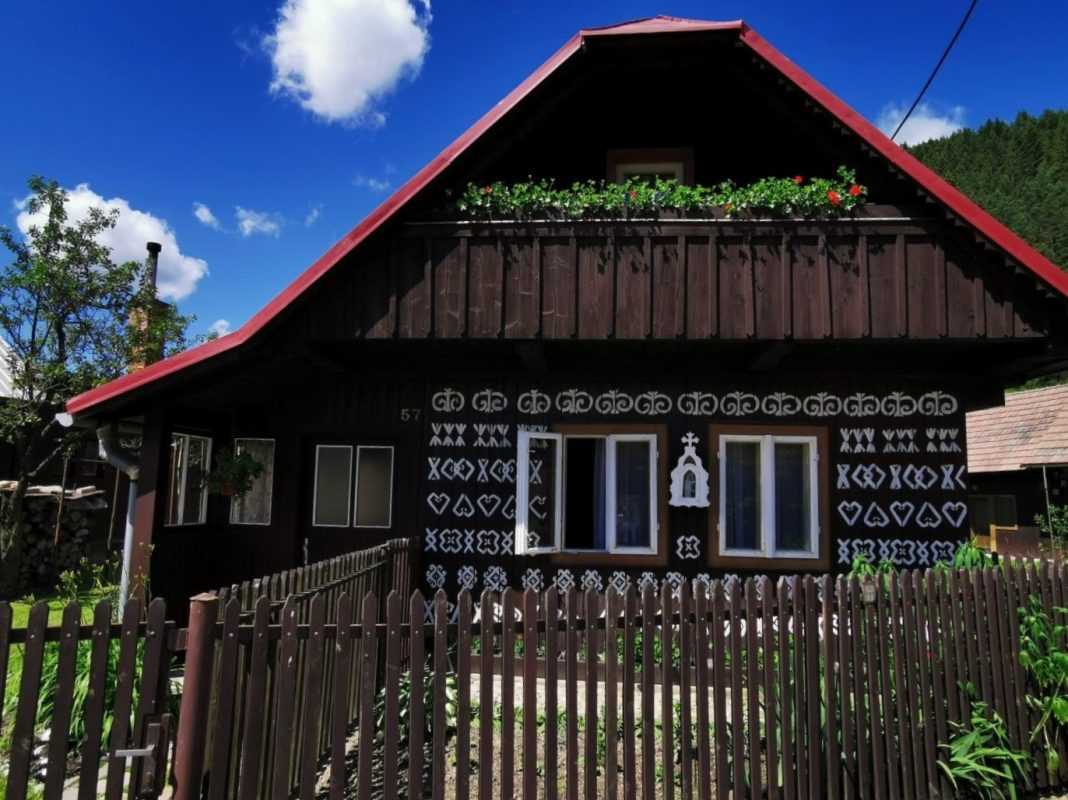 Unfortunately, a fire in 1921 and then World War II made damages on the village buildings. Practically the whole settlement had to be rebuilt, so the houses were also repainted. In many cases, today’s ornaments are based on the design of wood carving, but despite their solid colour, they faithfully reflect old traditions and give Cicmany its charm.  Let’s look carefully at hearts, arrows, birds, tree branches and various symbols. I’m sure you won’t find two houses the same. 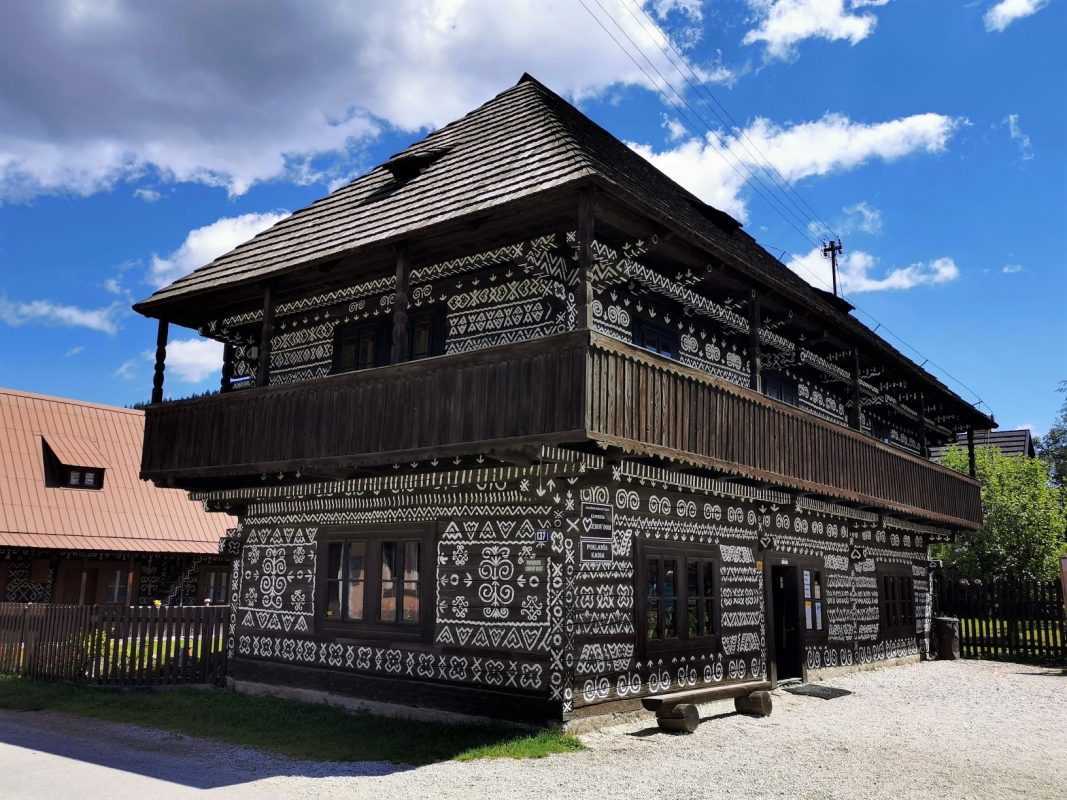 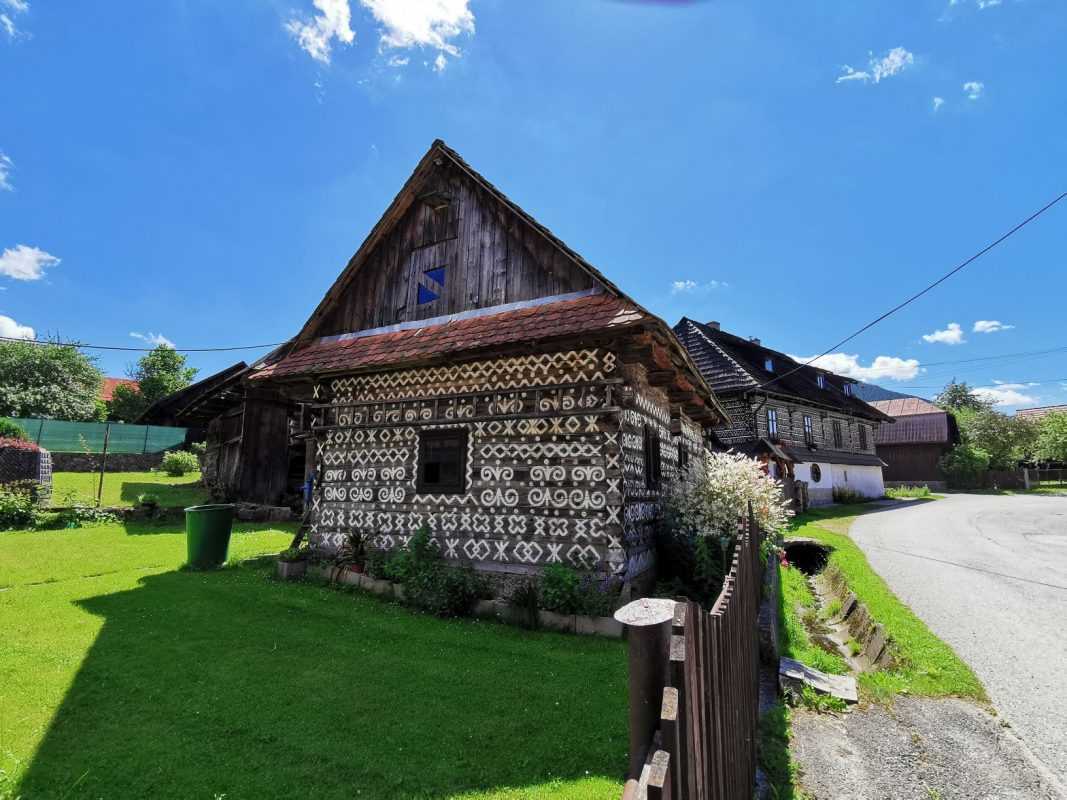 Among the shingled-roofed houses the Radenov House stands out for its beauty, which was the first to be re-built after the great fire. Since 1966, the house has been home to a museum that gives an insight into the everyday life of the people of Cicsmany, who lived in the mid-20th century, through the clothes, shoes and objects of use.

Within folklore folk costumes, it is worth paying special attention to embroidery, for which yellow, orange and red were used in addition to the white colour, thus preserving Balkan traditions. In the village, folk costumes are now only worn during holidays and events, the most precious example of which can be seen in February.

One of the biggest events of Cicmany is the carnival held in February, when the legend of fearsome Turony, wearing sheepskin fur coat and two huge horns on his head is revealed. According to legend, superstitious Turks were kept away from the village by people dressed in sheep’s skins. In form of mythical monsters, the Turks got their courage and didn’t attack the village. Hence the habit comes from today. If you perceive a resemblance to our Busó Walk in Mohács, it is not a coincidence, it is also a Slavic custom. Turony goes around the village during the carnival accompanied by a man and collects eggs and ham from the locals in a basket. During the evening, the carnival mask is replaced by folk costumes and ends the Turkish-ousting night in a folk campfire. 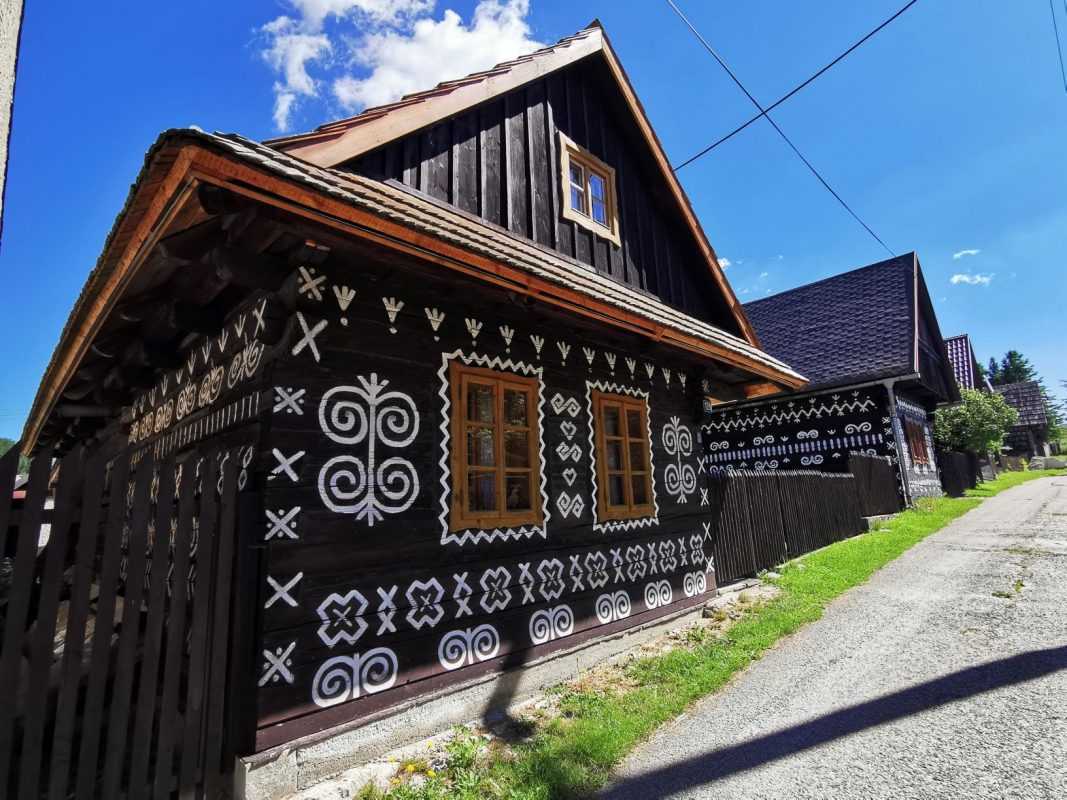 In house nr. 42 you can get acquainted with the typical furnishings of the apartments in Cicmany. The house is a great example of what a home used to look like. At the bottom there was a large smoky room with a stove and an open spire, while next to it or in the attic there were 2-6 non-heated sleeping rooms. If you want to take home some presents from Cicmany, it is worth shopping here from the local folk artists.

The baroque church of the village was built in 1798 to exalt the Holy Cross. The walls of this building are snow-white, but if you observe its dome carefully, you can discover paints similar to apartment buildings. The church bell was cast in 1588, while the organ was made in 1738, which made it likely that there was another church here before. 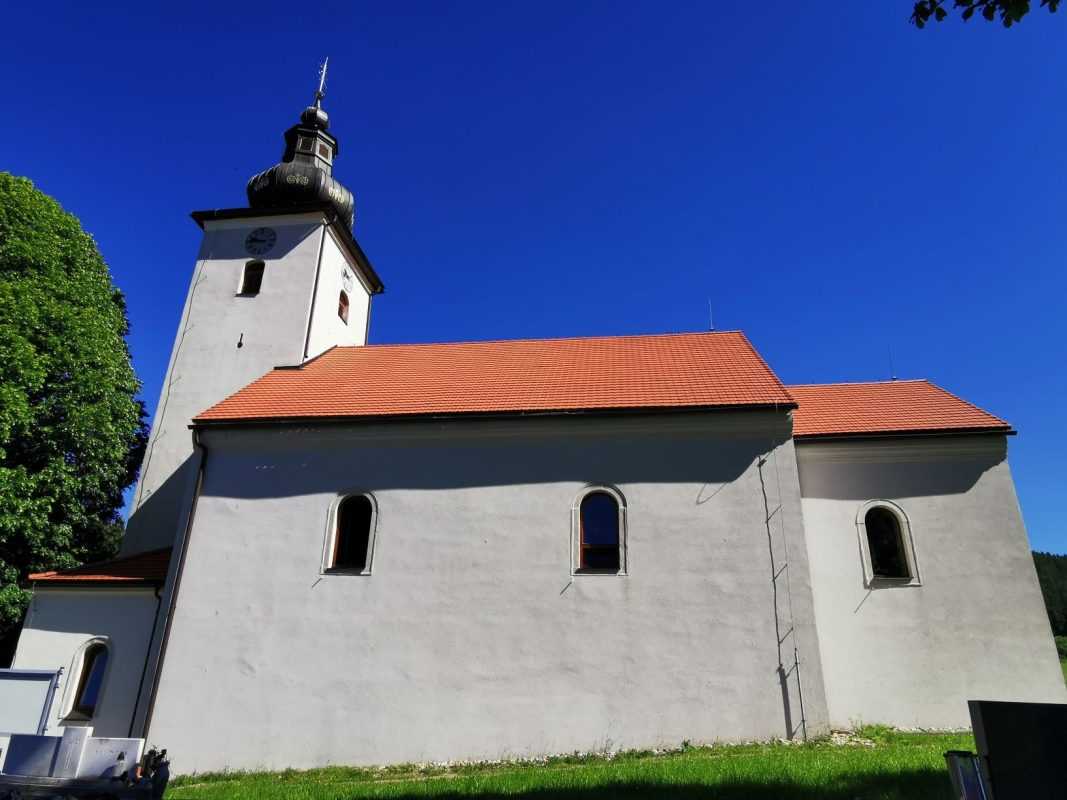 The Javorina Inn in the centre of Cicmany can be a good base point for hiking in the area and skiing in winter. The 1,213-metre-high Strazov peak and the entire mountain range are nature reserves, which, with its untapped hiking trails, promises to be a real delicacy for nature lovers. If you want something special after the painted houses of the fairy tale village, aim for Szulyó Mountain, which, with its rock empire, will surely captivate everyone’s hearts immediately. You can find the separate blog post and tour description here.