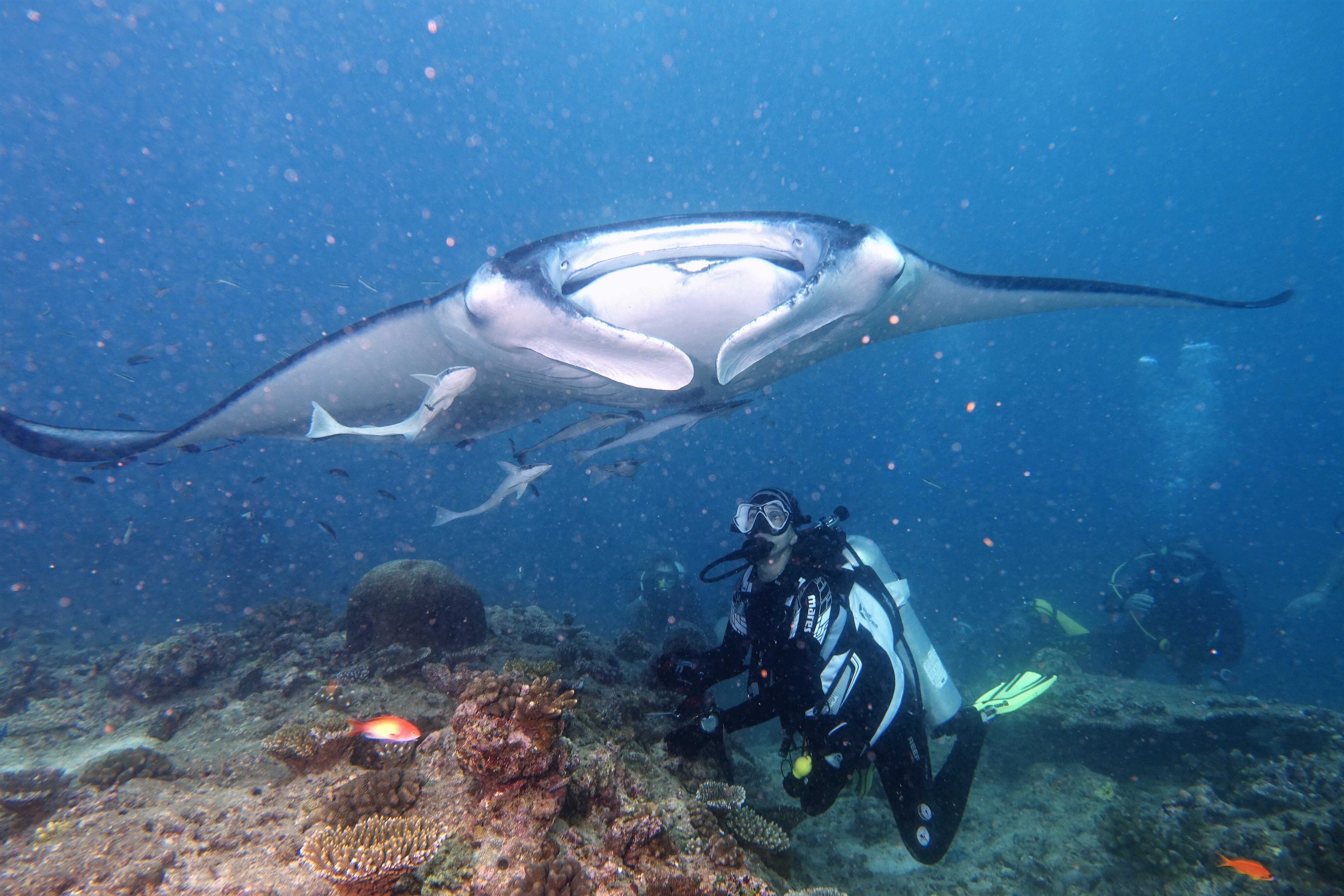 Under the surface at the Maldives

One part of the most beautiful sights of the Maldives lies above the surface (read here), while the rest lies beneath it. Given that the country’s average altitude is only 1.4 meters, you don’t have to go far to see the magical world of the Indian Ocean. But what makes wildlife so special here is that tens of thousands of divers visit the country every year for diving? The popularity is since there are many reefs in the oceanic state that has 1,192 islands. And the dive sites, despite being relatively close to each other, are very different. The outer reefs are like the walls of the fortress. They stubbornly resist wild currents and break them with their strong coral rocks. The channels are much more flexible. As gates of the fortress, they allow a mass of water flowing inwards and outwards, creating caves and angles teeming with soft corals on the walls of the canal. At the end of the canal corridor, around the 26 atolls (ring-shaped island), there are the mysterious thilas, the so-called underwater islands, which stretch just a few meters below the surface. In simple terms, you will encounter three types of dive sites in the Maldives if you dive underwater.

Diversified reefs and submersibles are the cause of sea currents. As winds of different directions and strengths blow on the ground, this phenomenon can be observed in the depths, influenced by countless factors from ocean topography to water temperature and earth’s rotation. The currents around the Maldives have always been legendary. Due to their unpredictability and extreme strength – the strongest current around Male was 4 knots in strength – sea merchant ships have long avoided the islands over the centuries. Unless there was something urgent, they wouldn’t sail from north to south between the archipelago. The calm surface is deceptive and does not guarantee that there is no greater flow a few meters below it, which can result in the sinking of the ship. The Maldives is currently the home of hundreds of shipwrecks. The oldest is the French ship called Corbin, which sank in 1602 and had silver cargo. In the old days, dive experts attempted to extract valuable treasures from the water, but they, like the ship, ran aground.

Thanks to currents and continuous, almost equatorial sunshine, the water is extremely rich in food, which attracts the sea’s creatures like a magnet for the delight of divers and snorkellers. I’ve already shown you a summary of the Red Sea wildlife. This time, I made you an underwater video of my best moments, but firstly here is a summary of what kind of animals can be seen in the movie.

For me, the most impressive marine creatures outside the whale shark in the Indian Ocean are undoubtedly the mantas. With their huge 5-meter “wings” and graceful movements, they are the ballerinas of the sea. One of the most famous reefs, the Moofushin, I celebrated 150th dive and I was so fortunate to meet them on this occasion.  Research shows that there are at least 10,000 specimens in the Maldives, making it the largest manta population in the world.

Mantas usually live in a place, i.e. reefs. Only during the monsoon (April – November) can be observed a kind of exodus in the east and west directions according to wind and currents. But even if they move away, they usually return to their original habitat, called the cleaning station, to filter plankton in an aerial dance formation. They eat around 19 million planktons a week, that is the nutritional requirement of an adult specimen.

The exact lifetime of the mantas is a mystery, but the oldest known specimen was 36 years old. A large number of population is reassuring, however only in every 3-5 years, a small manta is born. They’re abandoned by their mothers, too, so we can’t really talk about offspring care.

Of all the marine creatures, the turtle is my happiest buddy. When I see them I feel an unexplained joy. Most of the time, “dates” are either during eating or sleeping or running away from me. Turtles are not very curious towards humans. Now I was lucky as I met at least 5-6 copies during the Maldivian dives. They were much more photogenic than their Red Sea counterparts and even allowed a photo together.

In the video at the and of the post there are some creatures you’d better not to touch. No, they’re not the sharks but the morays. They grow up to 2-3 meters and are almost completely blind. They usually hunt smaller fish from caverns. They don’t attack humans unless they’re provoked. Then they can bite off a man’s finger with their strong jaws.

The morays played in other movies before, including the Little mermaid, as assistants to the sea witch Ursula. Not surprisingly they have an evil face and bad marketing. Let’s say, with their constantly opened mouths – which only draw attention not to approach them – they are indeed not the most attractive creatures.

The other interesting creature featuring in the video is the stonefish. In most cases, a stonefish looks exactly like a coral or rock. It’s hard to see it, though, the stonefish doesn’t have a good interest in being noticed. With its sad face, lint-like appearance and grumpy eyes, it reminds me most of me of a grumpy old gentleman. As I approached it with the GoPro, the stonefish immediately started to attack, and then, in the next moment it turned into a rock again. You really shouldn’t get close to it. Its spines hide one of the most powerful venoms in the world. If it hurts a human, it requires the immediate administration of antibodies. 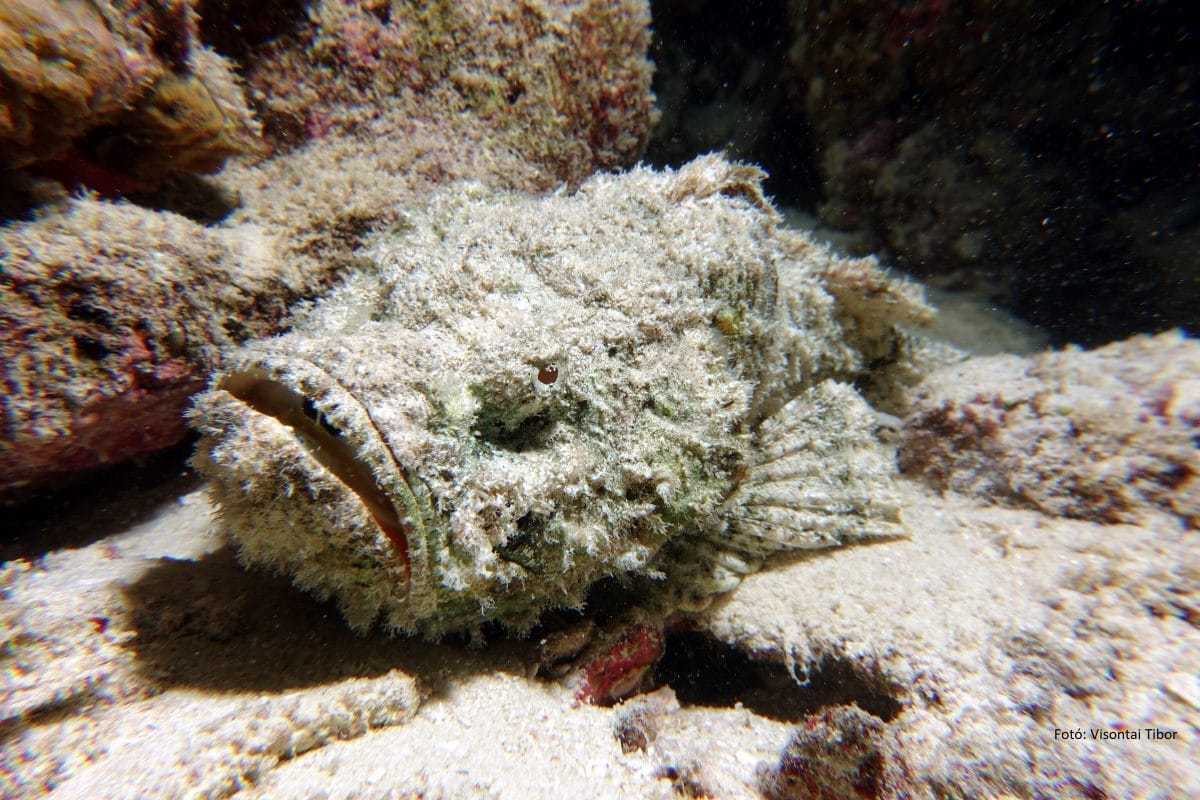 At the beginning of the 17th century, it was the first article in the Maldives mentioning sharks. According to astronaut Francois Pyrard, sharks were sent by God to be fed by humans for their sins. According to contemporary Maldivian reports, these animals often attack fishing boats by teaming up, as well as biting off the arms and legs of people floating in the water. Given that only 6 of the 101 documented shark attacks were fatal in 2018, I have some doubts about the Maldivian legends of the killer and aggressive sharks. During the dives, I only encountered peaceful sharks, some of whom approached the man curiously, but most of them looked at us more timidly than underwater invaders. 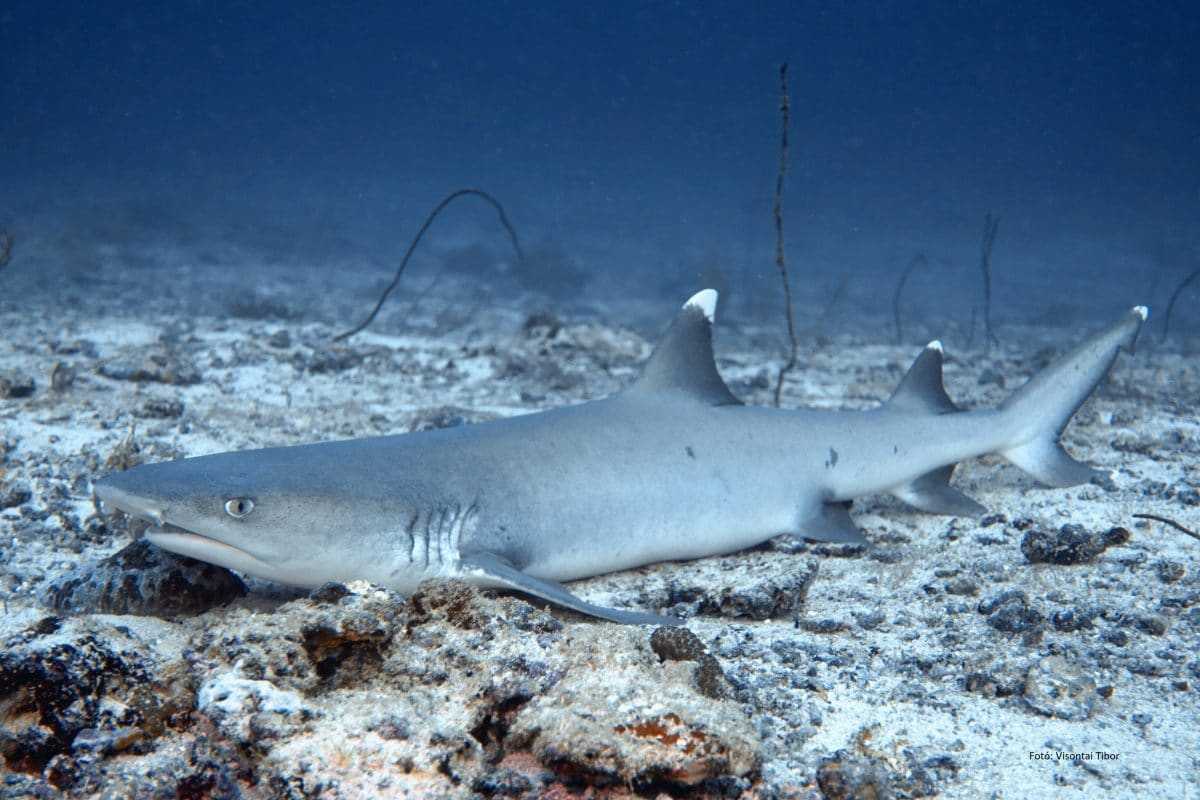 White-tip reef shark rests at the bottom of the sea. It’s just one of many reef shark species I’ve seen in the Maldives. Between three dive sites mentioned in the introduction, I would say that sharks always on the outer walls of the “fortress”. Where the currents travel at tremendous speed in all sorts of directions. I had to hook myself to the rocks, or I’d be swept away by the current, who knows where. While we were waving like flags in the water, all of us had shark teams swimming away. We really had nothing to do but go to the movies and watch them at a depth of 30 meters.

The sand-colored nurse shark is an extremely peaceful creature, but the mustache should not fool anyone. We ran into these sharks during a night dive, where we could only see as much as the flashlight light. Yet I did not have a fear that I and the shark were in the dark together. I was reassured that it was not all alone, because my diving buddies were there.

The guitar shark is a bit of a cuckoo. It’s more of a ray in shape, but in the Maldives, it’s referred to as a shark. By the way, with its triangular floats, it does look like a flat shark, and there are always guides fish around it, which are also the main feature of sharks.

I could list the creatures in the movie forever long, from clownfish to snappers. But now it’s the premier time. Welcome to a 6-minute short film about my visual experiences. And the following quotation from Péter Müller:

“The one who waits for the sea, all obstacles are small. He even goes around the mountain. Or you can cut a hole in it and, in time, dissolve the stones. Learn from the water, you can’t beat it. (…) It doesn’t know the word “obstacle.”