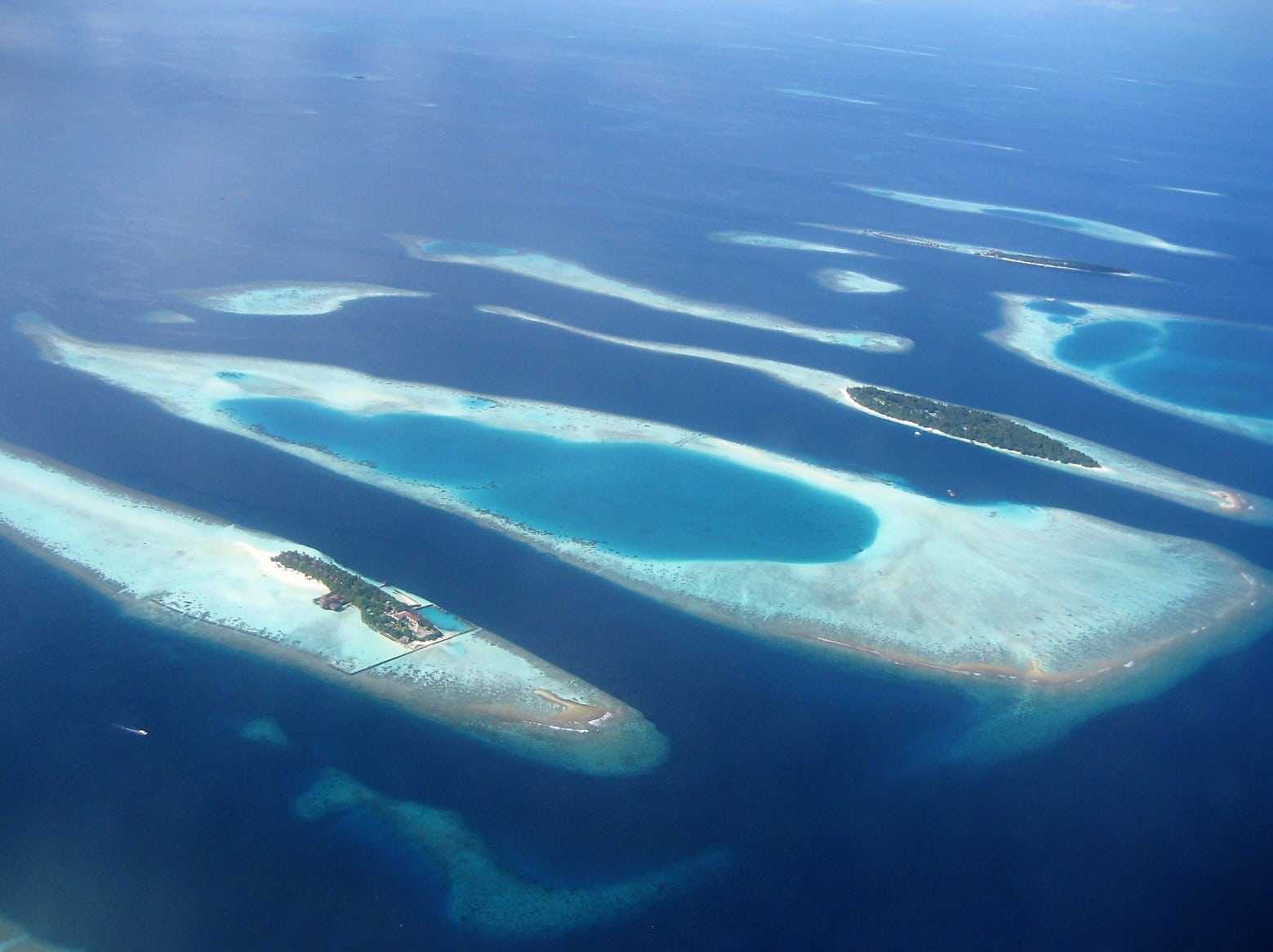 Postcards from the Maldives

When you hear the name of the Maldives, you automatically think of the snow-white sandy beach, turquoise water and palm trees. Indeed, this triple combination is convincing enough to target one of the 1,192 islands that make up the country. 1.3 million tourists visit the world’s most popular destination each year, most of them for honeymooning or diving purposes. Arriving in the island capital, Male, and leaving the terminal, you are immediately struck by the warm tropical breeze. And the smell of the sea with its salty smell. The harbor that surrounds the airport is quite dazzling. In the shallow water, hundreds of yachts and dhonik (traditional Maldivian boats) are waiting for tourists to be transported to one of the 87 inhabited islands.

I arrived here as a diver to immerse myself in the magical world of the Indian Ocean and enjoy its hospitality for a week. To be on a boat, lying on the sun terrace and watching the seaplanes over me. I imagined sitting on it and heading to one of the palm-tree islands dedicated to tourists. Arriving there, I would sit in the shade of the palm trees, sip a cooling cocktail, smell a lush tropical flower, or reach out on a massage table in one of the pile-houses with a perfect view.  Apart from one occasion- when our diving boat and the crew took us to an uninhabited island for a barbecue dinner – it remained a dream for me. However, I spent a lot of time on sand benches between two dives, looking at the crabs running in the sand, collecting shells, or simply enjoying the view of the waves. 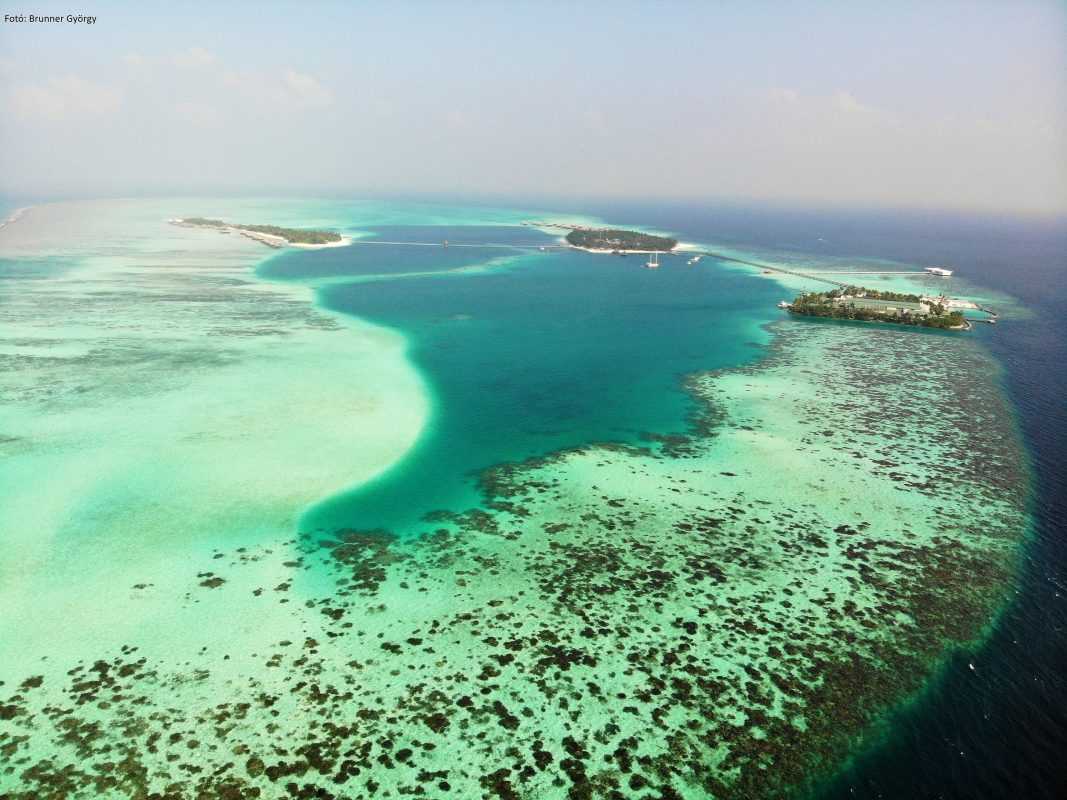 So there’s no palm tree photo of me in the sea, and neither did the cocktail-sipping. But underwater, I’ve seen wonderful things that I’ll soon show you in a separate post. Now I just brought you some postcards capturing my most beautiful surface moments without filters. These places just look like in real life like on these photos. Please welcome my handwritten postcards from the Maldives and from the country of thousand islands.

The Maldives is the lowest-lying country in the world, with an average altitude of 1.4 meters above sea level. The water surrounding the islands play in all shades of blue and it is now one of the main attractions for tourists. However, over time the water will also cause the loss of the country. Thanks to global warming, sea levels increase by about 3mm per year. If this trend continues, not in our lifetime, but the islands will most likely sink into the sea and the country will be the next Atlantis. 99% of the Maldives are composed of water and only 1% are of solid origin. Its extreme whites come from corals, unlike other sandy beaches (95%) in the world that are made of quartz. But where does this amount of white sand come from? 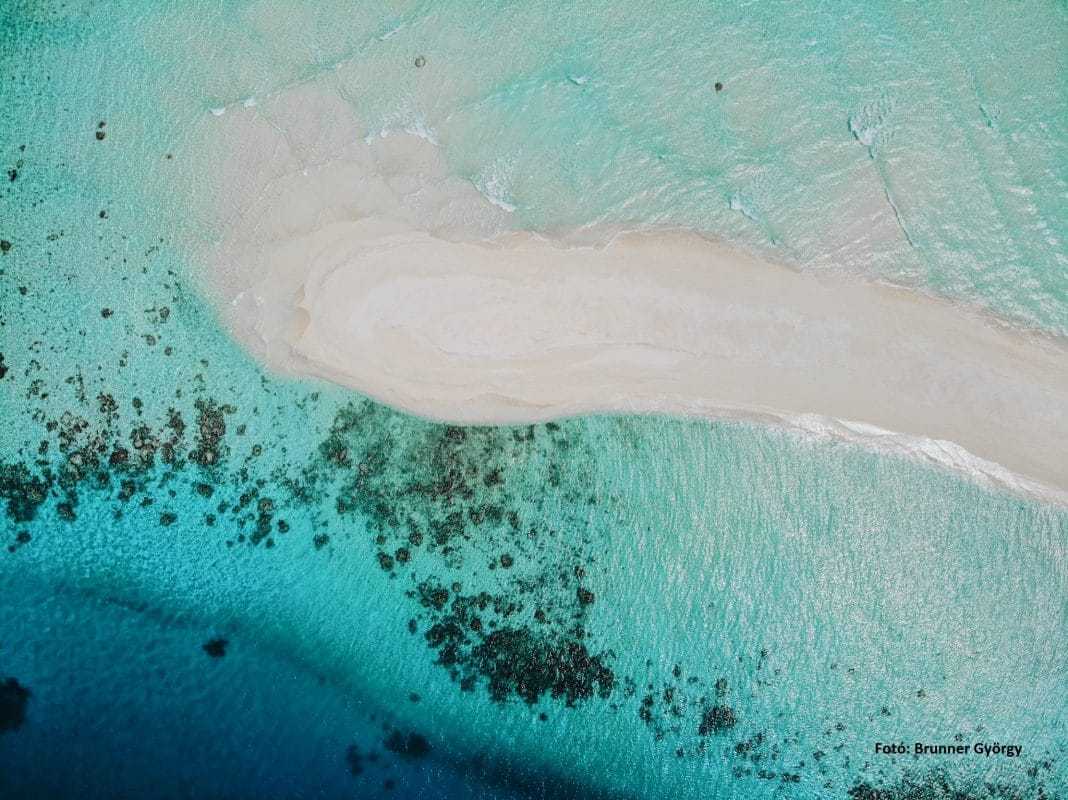 The answer lies in the work of parrotfish, which feed on corals. Adult specimens eat up to 1 ton of corals per year! They produce coral sand with their busy pecking. Thanks to ocean currents, the sand is transformed into a sandbank, and over time life appears on it. First, it takes the form of tiny crabs, then later tropical vegetation, and finally palm trees. 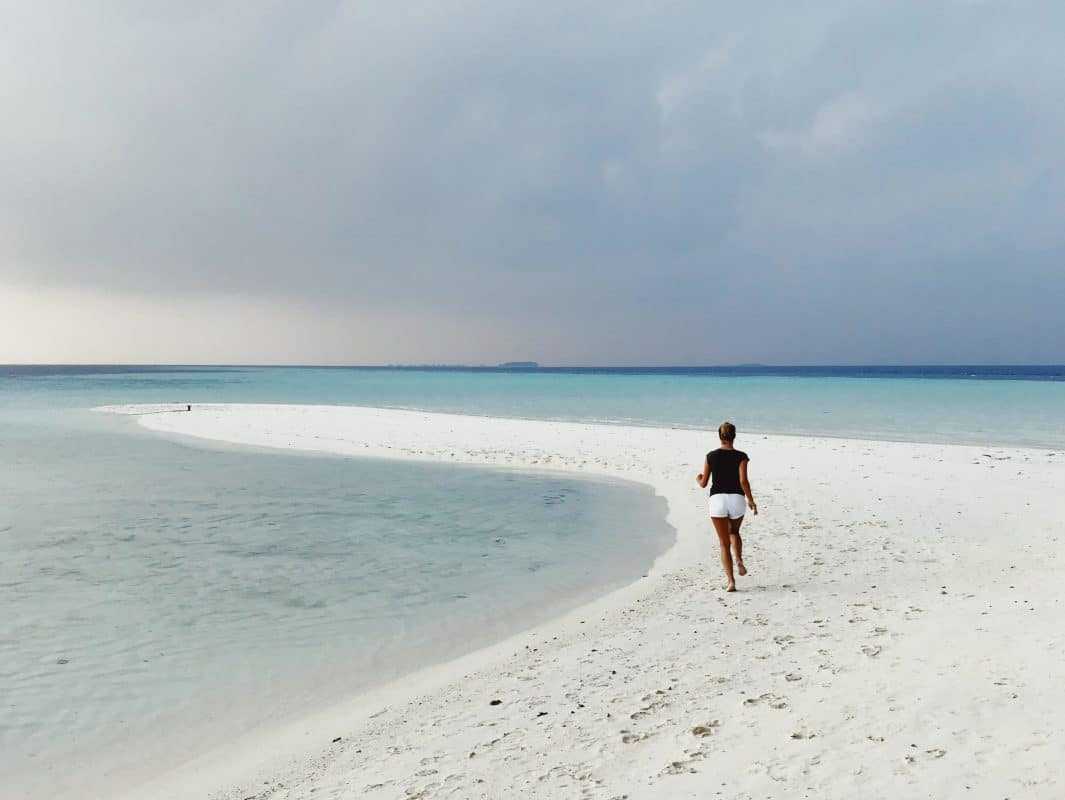 In the life of the Maldivians, sea always played an important role. In the Middle Ages, mussels were served as a means of payment, while corals also served as building materials. Many buildings in the capital and the islands still hold traces of this. The most beautiful of them and also the holy site of the country, the Hukuru Miskiy Mosque, built in 1656, is located in the Old City of Male. 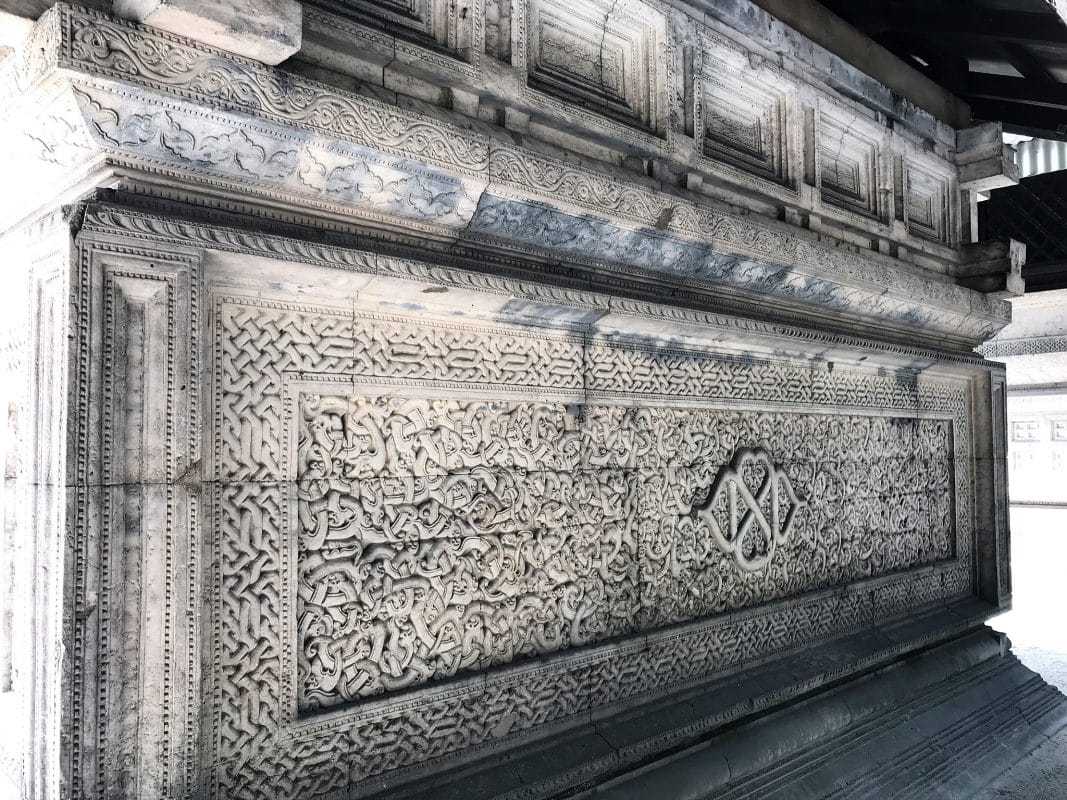 The beautifully carved building is decorated with Koran quotes and is adjacent to the tombstone cemetery, also made of coral, where descendants of famous leaders and dynasties lie. The mosque was recommended for UNESCO World Heritage protection in 2008. And if that’s not enough, there’s a lot of fruit-eating bats hanging in the trees around the building.

People living on the islands have been following the religion of Islam since the 12th century. As a curiosity, the country is not only the smallest state in South-East Asia, but also the smallest Muslim community in the world with a population of 430,000. The modern Islamic center in the capital plays the role of religion and politics at the same time. Since 2008, the Ministry of Islamic Affairs owns this building, but there is also a mosque suitable for 5,000 worshippers. The center also hosts conferences, state gatherings and includes an Islamic library.

The Maldives has not so many attractions than the beautiful marine environment, but walking around Male it is worth taking a tour to the fish and fruit market. Most goods are imported products that come from Africa or Sri Lanka. Accordingly, they are not cheap. Coconuts, on the other hand, are locally grown and can be accessed on the market for just $1. With their juice, they divine thirst in the 33-degree heat. Speaking of gastronomy, Maldivian cuisine is based on a lot of vegetables, fish and chili. Their national animal is the yellowfin tuna, of which I have unfortunately seen a lot of it spread out on the fish market. 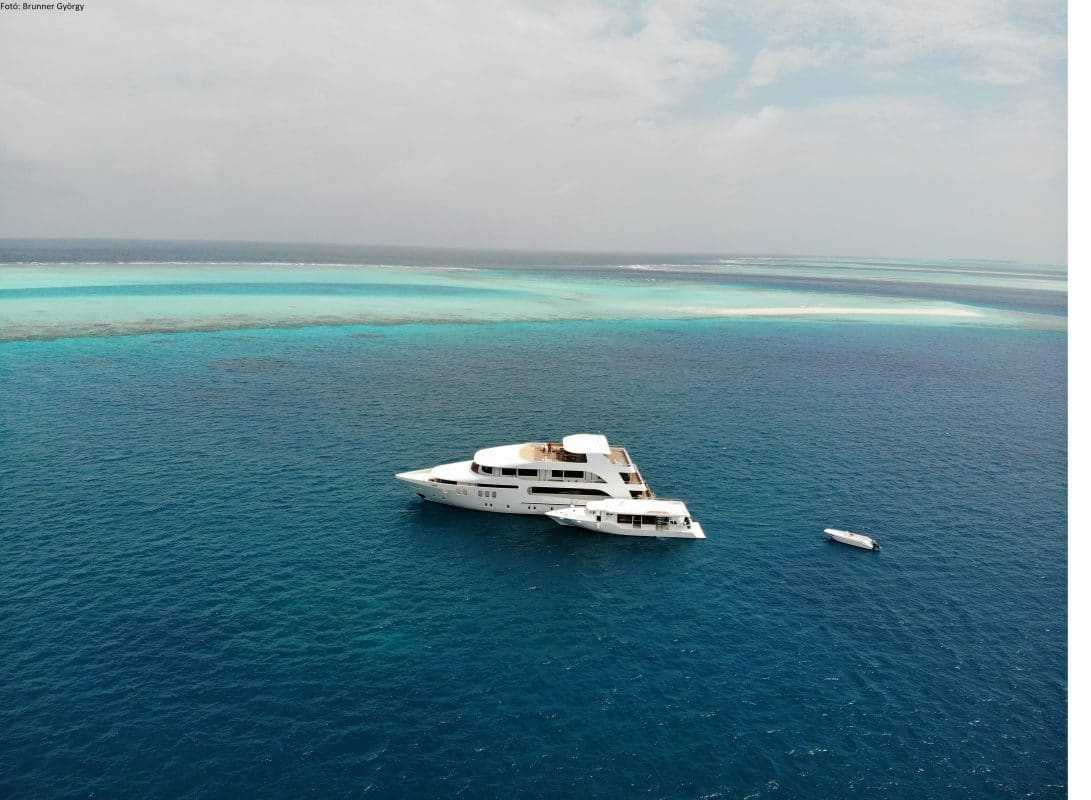 On the boat, we were given food three times a day. Everything is very tasty, but apart from the fruit everything was impossibly spicy. And this is supposed to be a fine-tuned version made for tourists. Apart from the sand benches, I once managed to get to a deserted island as part of the dinner mentioned in the introduction. Everything was spicy there, too, but somehow it wasn’t bothering me after a lot of days. Once I was on the deserted island, I made some photos of the country’s national tree, the coconut palm, which is not only a symbol but literally, it is the life for the Maldivians.

People living on the islands have been using every part of the coconut palm for centuries. Flour or food is prepared from its fruit, its juice is served as a drink, its bone-in zest is suitable for storage, its leaves are spun into a roof or basket, or used for healing (bone fractures), and its trunk is made of furniture and dhoni (vessels).

A palm tree can grow up to 30m high and its fruit, nuts and travel hundreds of km away thanks to ocean currents. When a nut gets to the mainland, the crop slowly takes root and eventually becomes a palm tree. Most of the sandbanks I’ve been to be had coconuts. In a few years, they become a tree, unless the island sinks and goes under the sea. To where life began once and where most of the Maldives once came to rest.

” The world, however, does not end up with the surface.  Under it you can find an invisible and a deeper thing. The visible is just a wave in the invisible.” 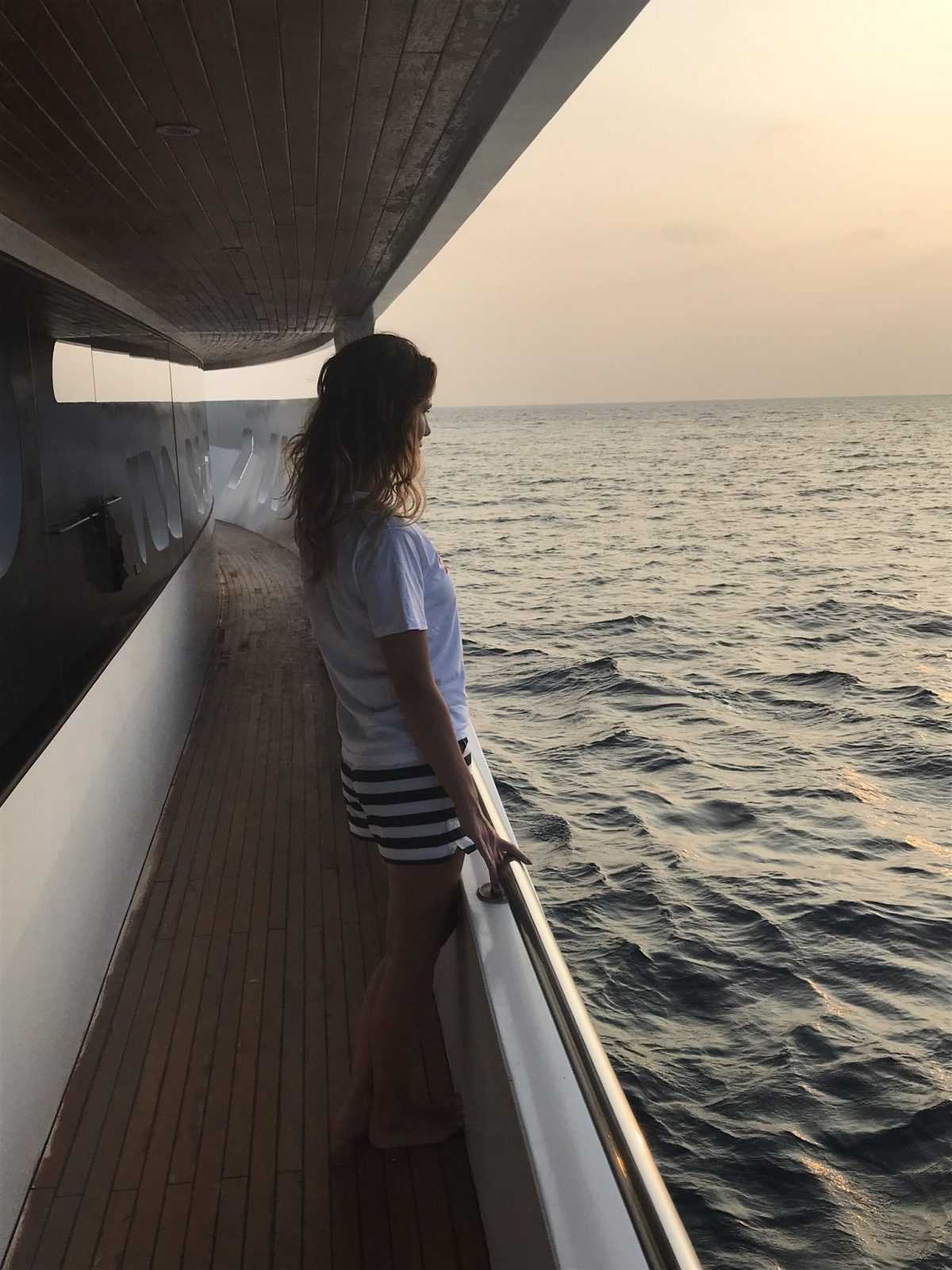