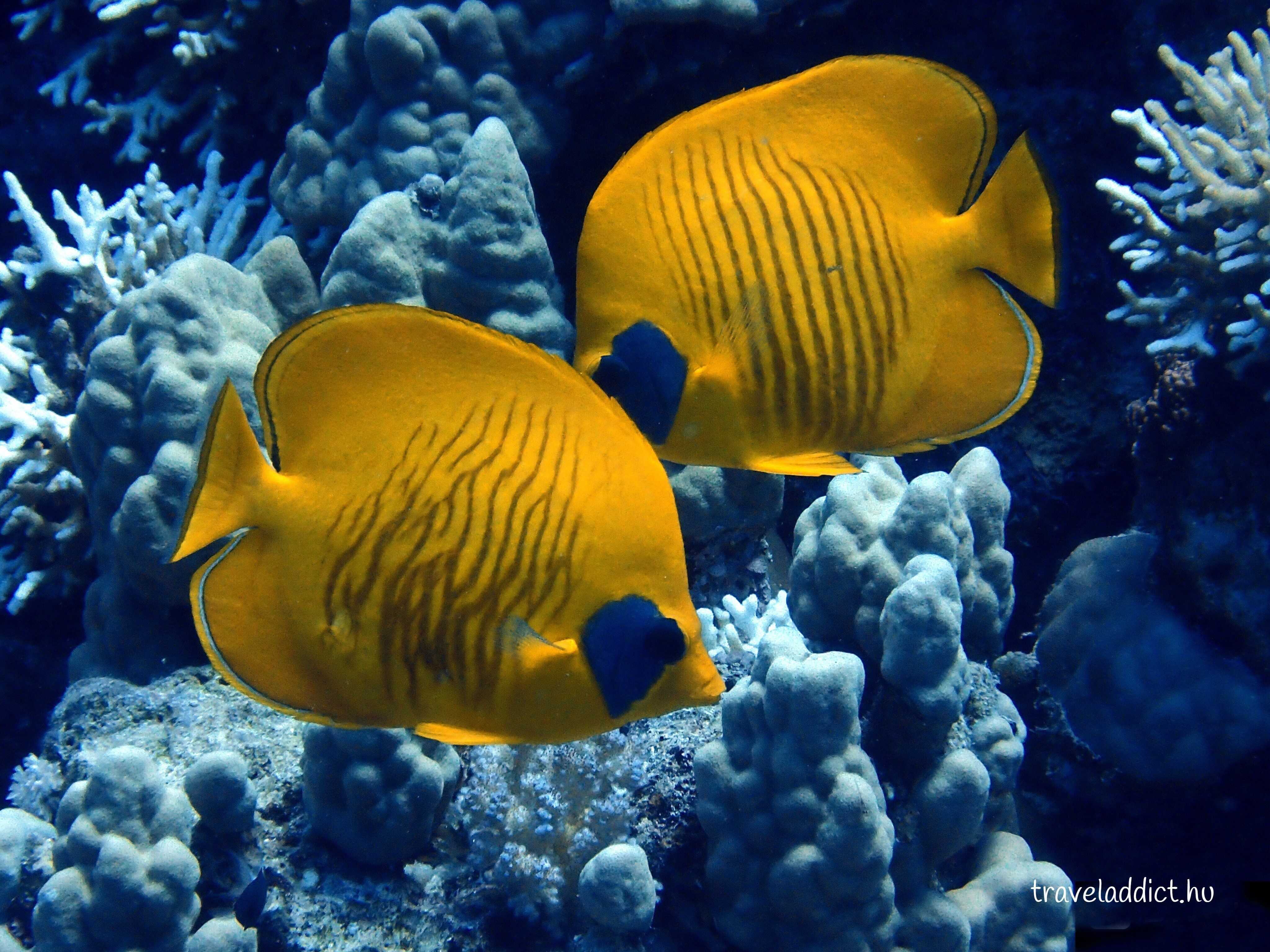 Who is who: in the Red Sea

After my latest diving blog post, I received much feedback from you that you’d like to read more about the marine life of the Red Sea. I am pleased to do that so let me share with you a scientific and educational entry. Don’t expect a David Attenborough-level documentary post. As a child, who grew up in Borsod country, I never had a chance to study marine biology, though I love it so much. But maybe I still have a chance to make my childhood dreams true as Attenborough began to show interest in nature filming quite late, only in his 30s. So, let me show you my top 10 nicest underwater creatures from my diving trip in Abu Fendera, Egypt.

Napoleon, also known as the lipfish, is the captain and gentle giant of the seas. You can see it relatively rare and, in most cases, alone, venturing down to a depth of 60 meters. It can grow up to 2 meters and weighs 190 kg. Its characteristic feature is the bulge on the head, which increases continuously with the number of years. The adult specimens are bright blue-green, sometimes with a purple tone, while the young ones are duller. They eat mainly fish, mollusks and crustaceans. I note here that Napoleon fish show a great interest in boiled eggs, but I cannot confirm this with my own experience. As a result of overfishing in recent decades, the population of Napoleon fish has drastically declined and has been an endangered species since 2005.

The characteristic color of Red Sea clownfish is orange, with 2 white stripes crossed across their bodies. They live stationary and in pairs with sea rose or other coelenterates in close symbiosis. They are only 12 cm in size but don’t be fooled. They can protect their habitat with such vehemence and combat skills if another fish or diver nears them. They immediately start an attack and pecking. When the female specimen (which is usually larger) dies, the male changes its gender. Clown fish, or anemonefish feed on algae and invertebrates, as well as leftovers not eaten by its host. The Red Sea anemonefish was also featured in movies, and played one of the characters in the cartoon “Finding Nemo”.

For me, the cutest sea creatures are the pufferfish and similar-looking species. With their big eyes and chubby bodies, they mostly remind me of cartoon characters. They have a very timid nature and immediately swim away as they see a human being. Luckily, I managed to capture them during the week. The characteristic feature of the pufferfish that it inflates itself immediately in case of danger, hence its name. The first of those seen in the pictures is the white-spotted pufferfish, which can be found almost anywhere in the sea up to a depth of 25 meters. Its interesting feature is the 4 teeth in front of its mouth, which grow until the rest of its life. In Japan, white-spotted pufferfish is considered a delicacy, but due to its toxic meat, it requires special preparation. Fugu masters learn for three years how to clean the fish to cook and make food from it.  The masked pufferfish in the second photo only live in the Red Sea and its size is up to 30 cm. My third photo subject is a common porcupinefish, which hides mainly among corals or caves from prying eyes. For humans, its meat is poisonous, but sharks tend to hunt for it.

This fish is the Jolly Joker of the Red Sea, because you can meet them almost every dive time. Stingrays are lifelong parents, weighing under 1 meter in size and just a few kilograms. On the sandy sea bottom, you can usually see them looking for mollusks and worms feverishly. The sand often makes only their big eyes visible, but when they are not covered by sand, you can easily recognize the stingrays by their purple dots. At the end of their long tail, there is a long spike that is deployed in the event of an emergency. It can result in a painful puncture, but fortunately, it’s not fatal.

The ballerina of the seas is a Spanish dancer and every meeting is always considered to be a special experience. During my night diving safari in Egypt, I didn’t bring down my camera as I thought I won’t need it.  Of course, this time I saw Spanish dancers in the caves of St Johns Reef. So this is not my own photo sadly, but I didn’t give up to catch Spanish dancers once in my life. What can we know about this marine creature? First of all, it’s the cuckoo on the top 10 list, because a Spanish dancer is not a fish, but a snail. Secondly, it can dance underwater. No joke! Look at this video. 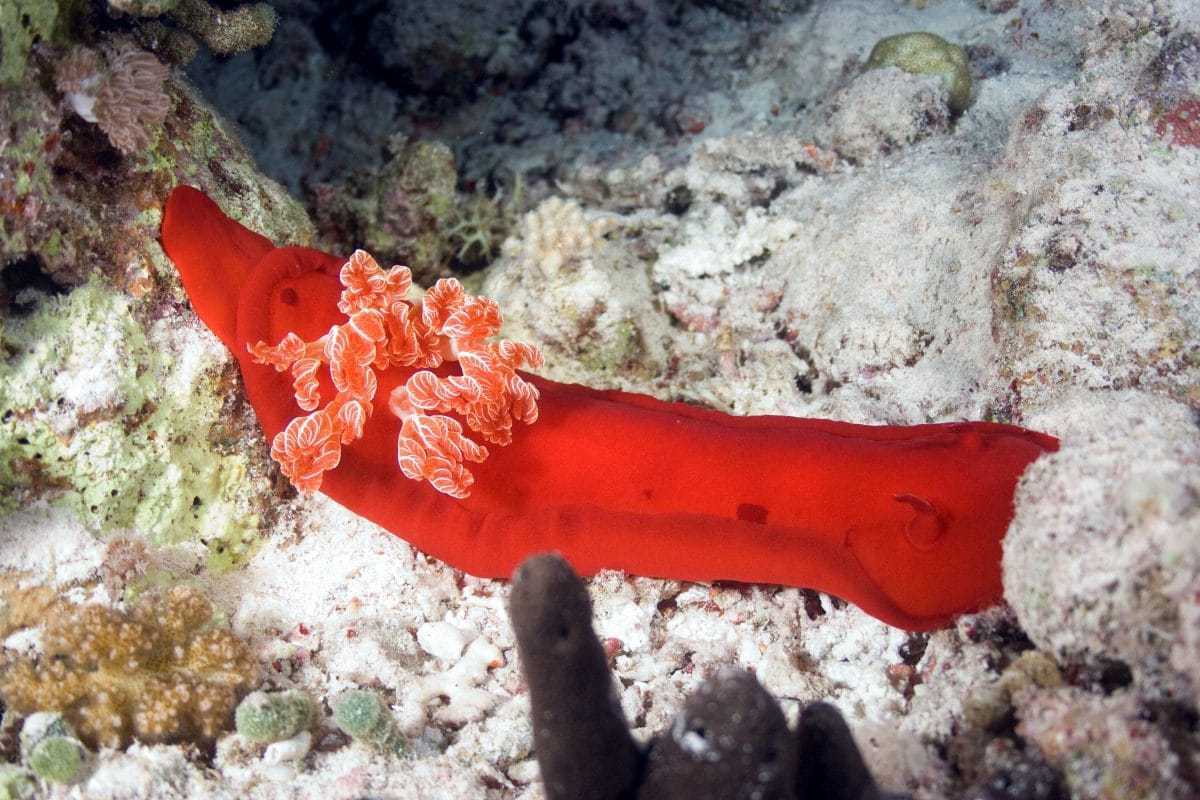 It’s hard to recognize the scorpionfish as it can blend into their surroundings in such a masterful way. Depending on whether you are on a sandy area, coral or rock, it acts as a chameleon and takes on the color of the environment. The scorpionfish can be found almost anywhere in the Red Sea up to a depth of 70 meters. It waits motionless, and when its victim – mostly a smaller fish – approaches him, suddenly catches him with his raised jaw. In the event of an emergency, scorpionfish raises his swimmers high, warning not to approach him. If you palm your hand carelessly into the spines on your back, the scorpion will inject a very strong poison into your victim’s body. If this happens, it is necessary to go immediately to a doctor to get an antidote to avoid more serious symptoms.

Butterfly and Anglefish These palm-sized fish were included in the list because they meet almost every diver. Their colorful appearance immediately attracts the attention of divers and snorkellers, making them popular inhabitants of the Red Sea. Butterfly and angelfish prefer shallower waters and feed mainly on plankton and sponge. They usually live in pairs and patrol the corals like that. Although the masked butterfly fish and Red Sea bannerfish shown in the pictures are endemic – that is, only the Red Sea is their natural habitat – they also feel comfortable in captivity and aquariums.

Lionfish are very easily recognizable and cannot be confused with other marine life. Its reddish-brownish body is surrounded by antennae-like spikes, which usually stare at the sky. So it seems this fish is always angry. It’s rare to meet a lionfish during the daytime, but in a night dive, a specimen of lionfish will definitely appear in the light of the flashlight. It likes to follow divers because it is easier to hunt smaller fish or shrimp in the light. It never attacks a human, but let’s approach lionfish with caution. Its spikes contain strong poison and can cause in rare cases even death.

This particular fish in not only added to the list as a sign of my admiration for Picasso’s art. But also because scientists say Picasso fish has the same unique triple colour vision ability like a human.   We usually see solitary and mainly female specimens swimming among the coral reefs to protect their own territory. Picasso fish occurs in every ocean of the world, but they vary in colour depending on their location. For me, with its orange-sky-blue pattern and characterful appearance, the Picasso fish is one of the pearls of the Red Sea. 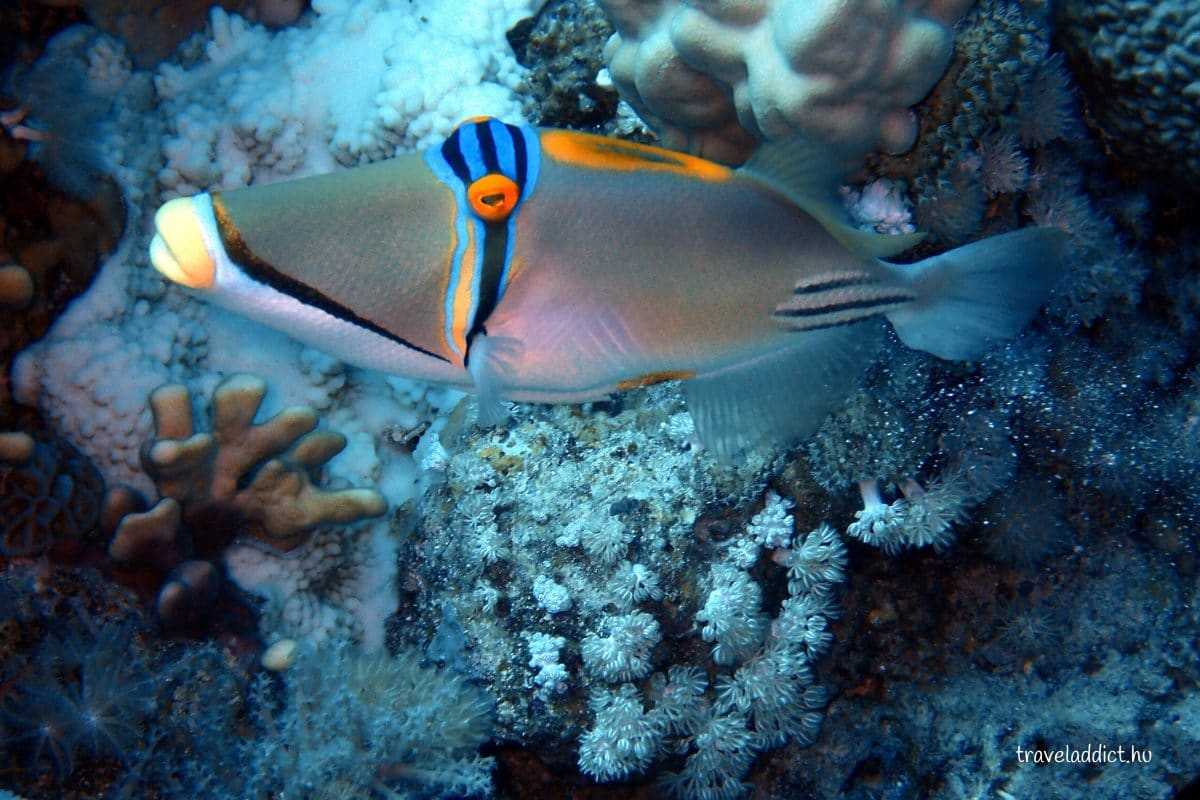 With its notable size of up to 75 cm, the titan triggerfish stands out from other triggerfish species. You can often see them as vacuum cleaners packing small pieces of corals on the sea bottom or polishing their nest in the sand. During the spawning season, when the female puts the eggs in the nest, make sure not approaching them. But this advice is true for any period of time. The triggerfish is quite aggressive and, with extremely fast movement, it immediately attacks. Its bite can cause serious injuries to a person, so it is better to keep a fair distance from them.

In addition to the creatures on my top 10 list, there are many inhabitants of the Red Sea. Like various reef sharks, morays, turtles or dolphins, whom I also met during my recent dives in Egypt. If you’d like to see more photos of marine life, I’ve summed up my best moments in this video.