What is the most beautiful part of Borneo where you can get a taste of the jungle, sea and the island’s unparalleled wildlife? Where to meet wild orangutans? Where are the islands where the water is as blue as you can only imagine? What communities live in Borneo’s waters? In the footsteps of legendary peoples, islands and animals…

At the end of my two-week trip to Borneo, we headed north from Kota Kinabalu and didn’t stop with the cute cartoon-character Air Asia plane all the way to Sandakan. Not to be confused with Sandokan, the Malaysian tiger, starring Kabir Bedi, who fought against English colonists in the 19th century and his story was taken to the film screen in 1976. No, this Sandakan is a town in Northern Borneo, most notable for its famous Sepilok Orangutan Rehabilitation Centre. I admit it was one of the most anticipated programs of the tour to see these wonderful creatures whose DNA is 97% the same as that of humans.

Established in 1964, the rehabilitation center is the world’s four largest orangutan complex and home to animals lost their habitat. The area consists of 43 km2 and some 4,500 hectares of forest land. While there were 288,500 Bornean orangutans on the island in the ’70s, poachers and deforestation will reduce their numbers to 47,000, according to the World Conservation Association (IUCN) calculations by 2025, making them among the severely endangered species. 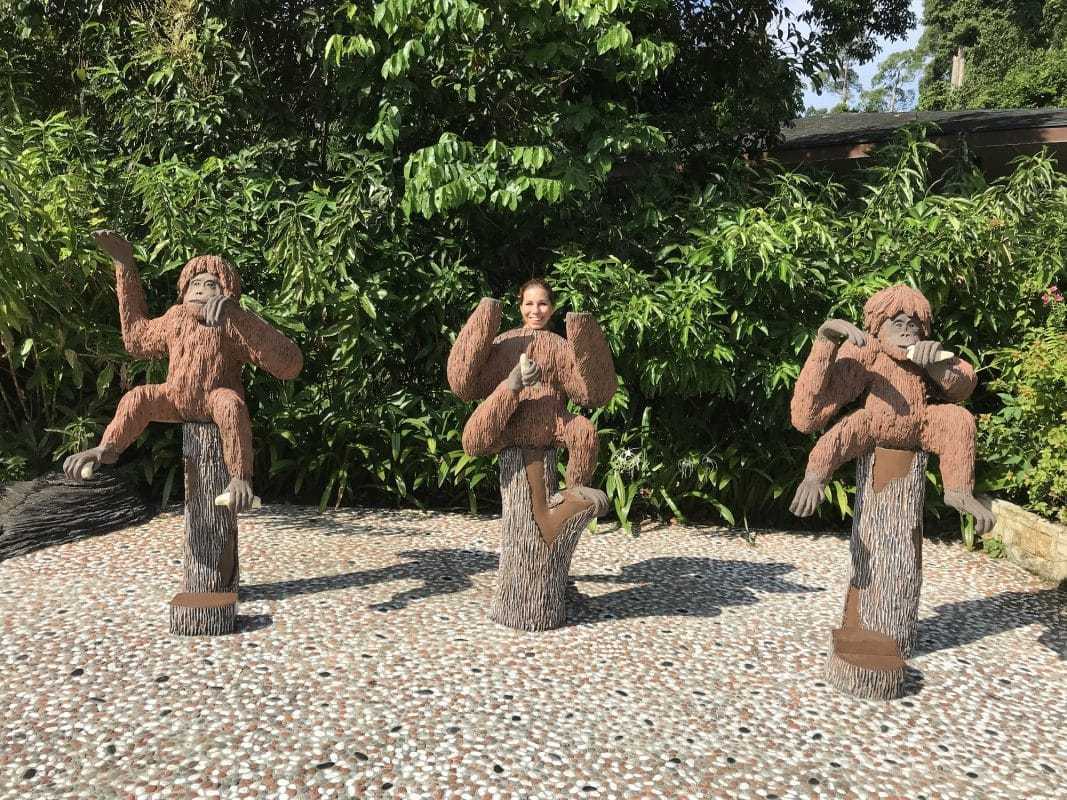 The Sepilok Orangutan Rehabilitation Centre is open seven days a week. First, we looked at orphaned little orangutans in a kindergarten separated by a glass wall, where they are taught the basic things of life before letting them back into the wild. Before anyone else misunderstands, it’s not the animals that are locked up, it’s the people who are excluded from the animal habitat, which immediately made the place sympathetic to me.

You can only walk on designated routes within the park area, where orangutans live so freely that if you’re lucky, you might as well meet one in front of your eyes. We only saw an orangutan glide over our heads. He wasn’t brave enough to venture down at least to eye level. 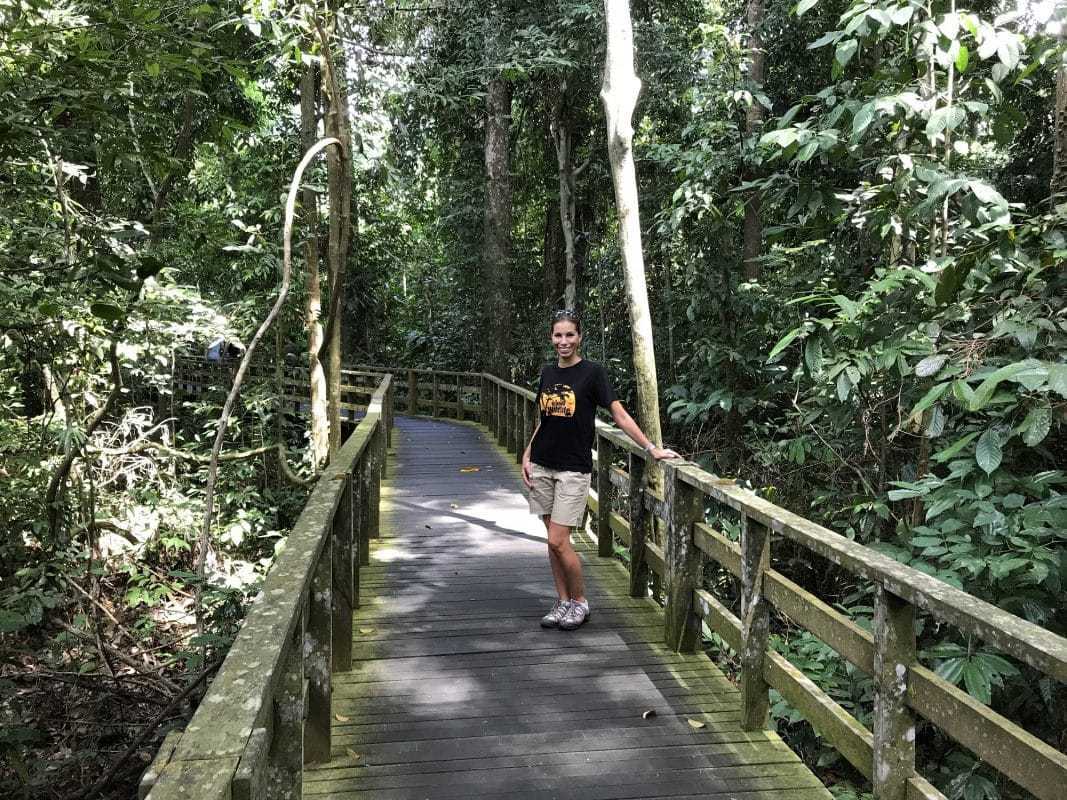 To avoid disappointment, there are fixed feeding times in the park, during which you can see these incredibly intelligent creatures up close and even you can adopt them. However, let us not be surprised if the kinship is too large and an orangutan has hundreds of parents at once.

The sun or Malay bear is the world’s smallest bear and is native in Borneo. The animal, which is only 1.5m long and 70cm tall, is roughly the size of a sheepdog and takes its name from the stain on its chest, reminiscent of a yellow sun. On our visit, the specimens in the nature center mostly slept in the trees and basked in the sun, they were not very active. The center opened in 2014 in Sepilok to visitors and now is home to 53 elderly sun bears and orphans.

After a 4-hour bus ride from Sepilok and a bump through oil palm groves, we reached the Kinabatangan River. The boats were already waiting for us on the clay yellow waterfront to take us to the jungle accommodation to the other side.  Kinabatangan is Malaysia’s second-longest river. 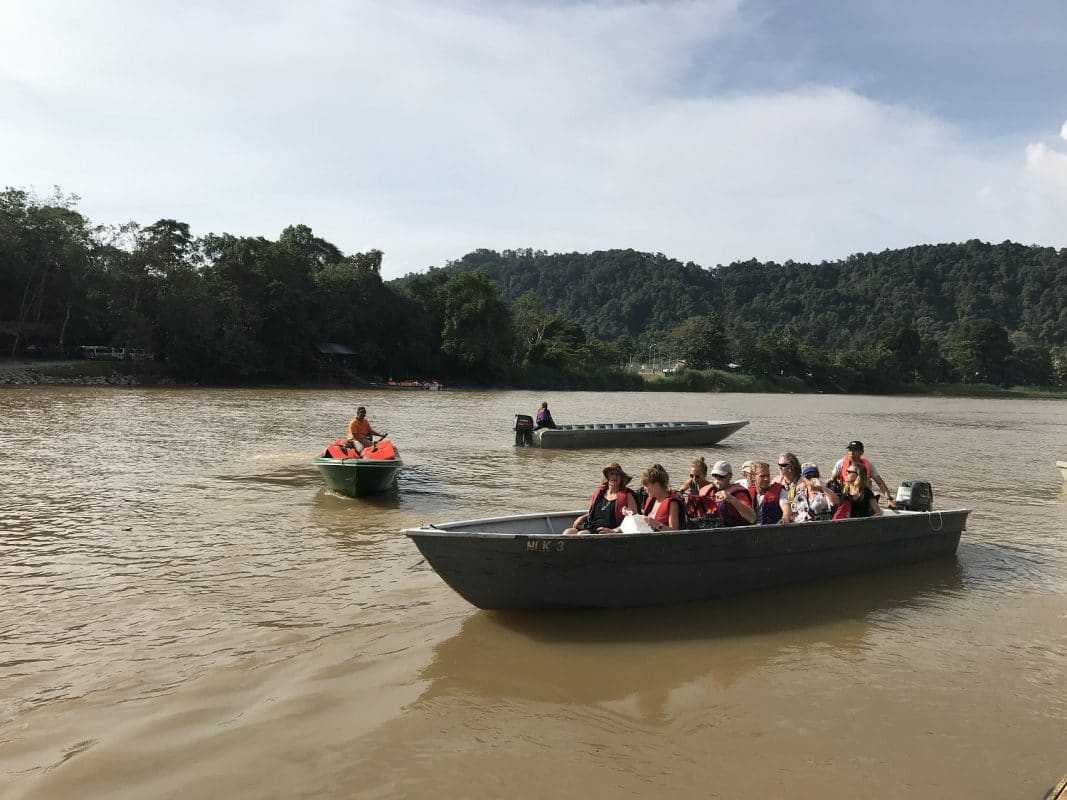 This area in Borneo is extremely wet, it rains almost every day, which is picked up in 900-gallon barrels and cleaned as bathing water within the resort area. Apartment buildings stand on high piles due to riverside floods and rains, while transport is assisted by wooden planks made of Belian wood. The conditions here are much more modest than the jungle accommodation in Mulu, but the atmosphere is much more nature intimate. 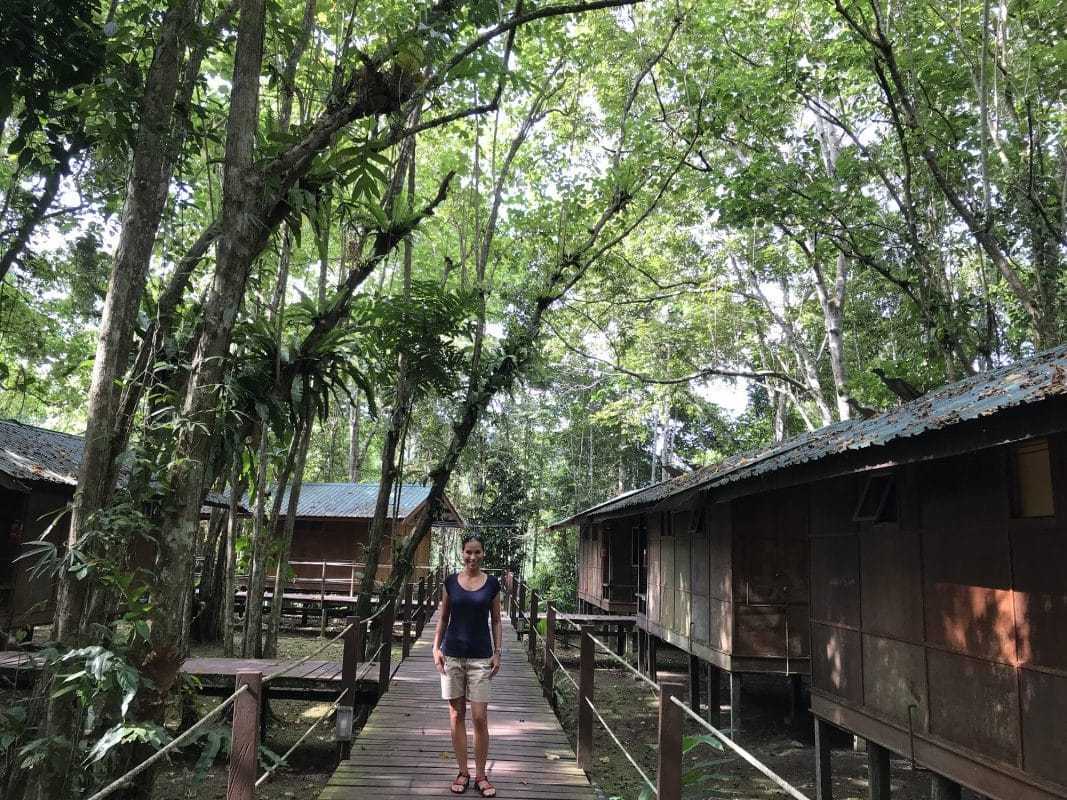 It’s perfectly acceptable here if a grasshopper in the room is on the water heater, a gecko is trying to eat your biscuits, or you wake up at night with monkeys jumping on the roof. It’s a fantastic feeling to be so close to nature and to be part of it as a visitor. 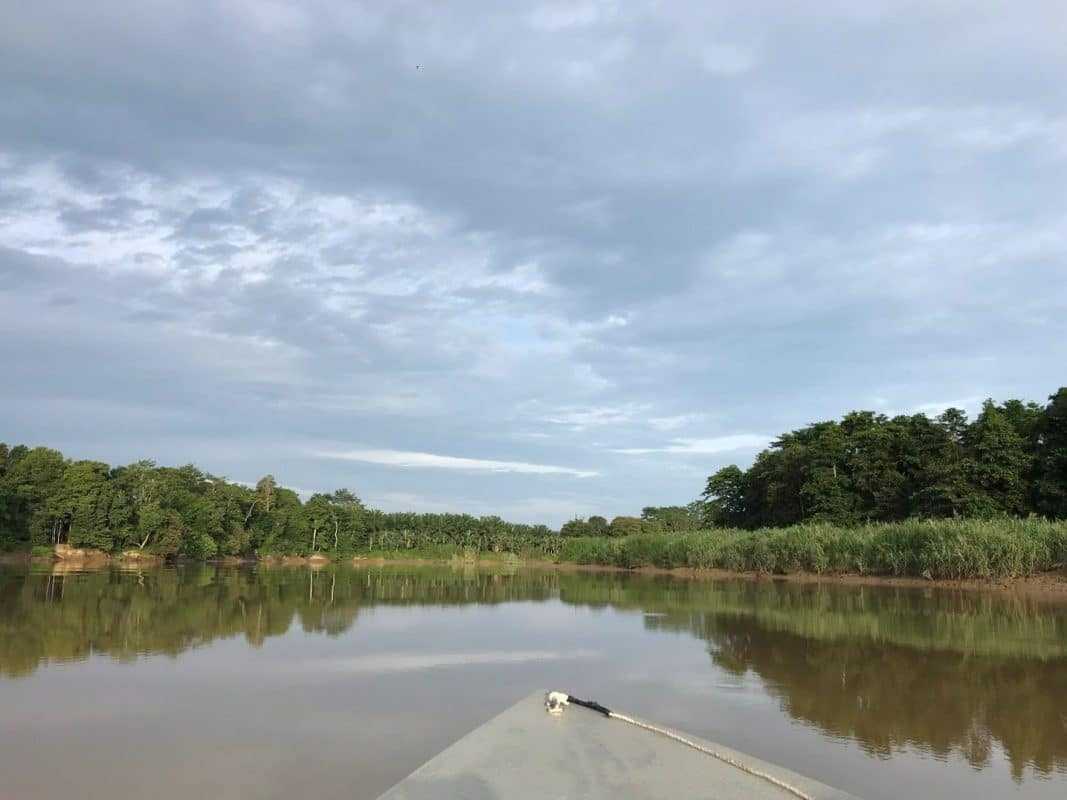 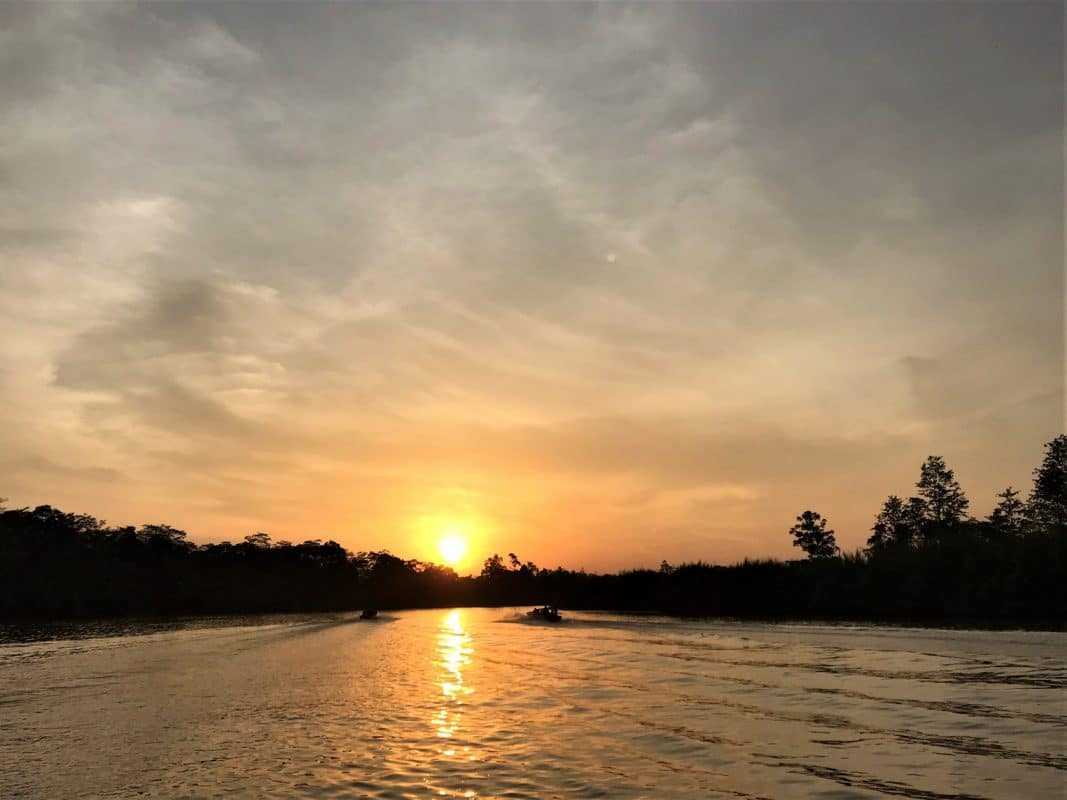 The aim of our stay was also to observe the animals undisturbed on the river during a boat tour in their original habitat and to see the other face of the jungle at night, strictly with a tour guide. The following picture gallery shows the animals we saw at Kinatabangan River:

After the riverside experience, we headed back to civilization and didn’t stop all the way to the port city of Semporna.  Actually, there’s nothing to see in the city, and it’s not very safe to walk around here alone after dark. Unless you’re hungry because then you’re obligated to try one of the restaurants in the harbor, where you can get all kinds of seafood and special Asian food at cheap prices. 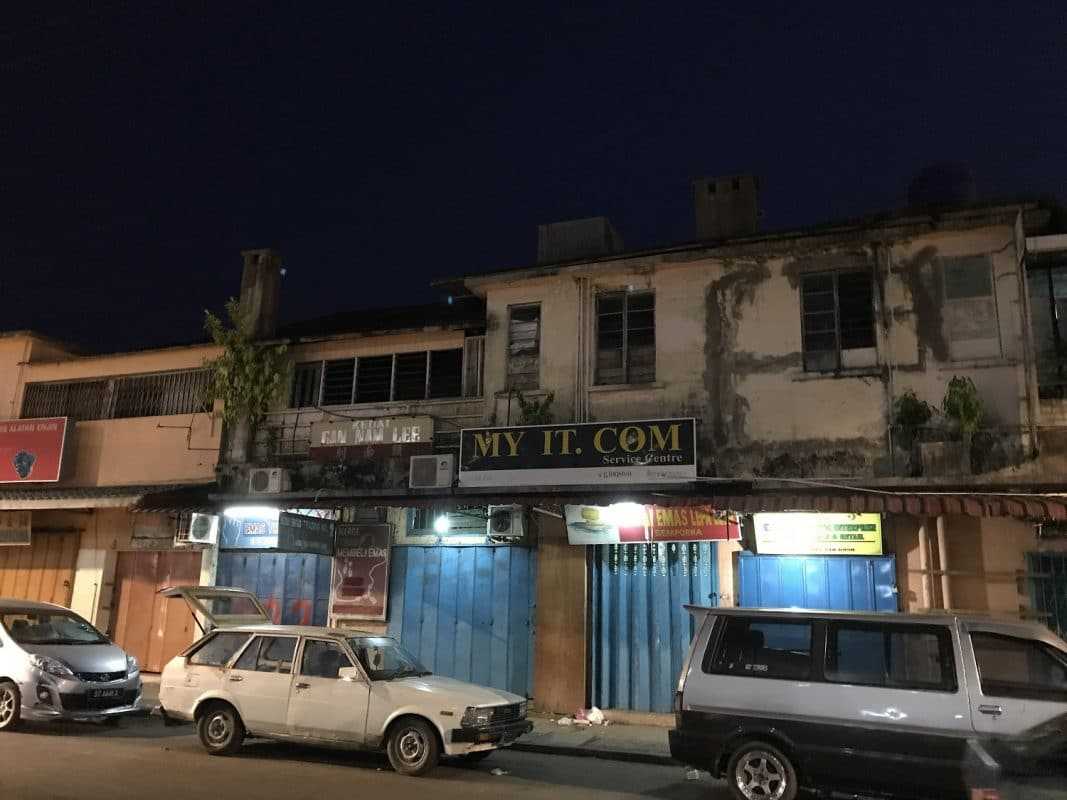 There are plenty of Chinese tourists, who in many cases are not here as visitors, but as owners of restaurants and businesses operating in the city.  There are not only restaurants in the harbor, but it acts as a moving fish market. Most of the time, children walk on the terraces of restaurants with buckets in their small hands trying to sell freshly caught crabs and mussels to hungry people. 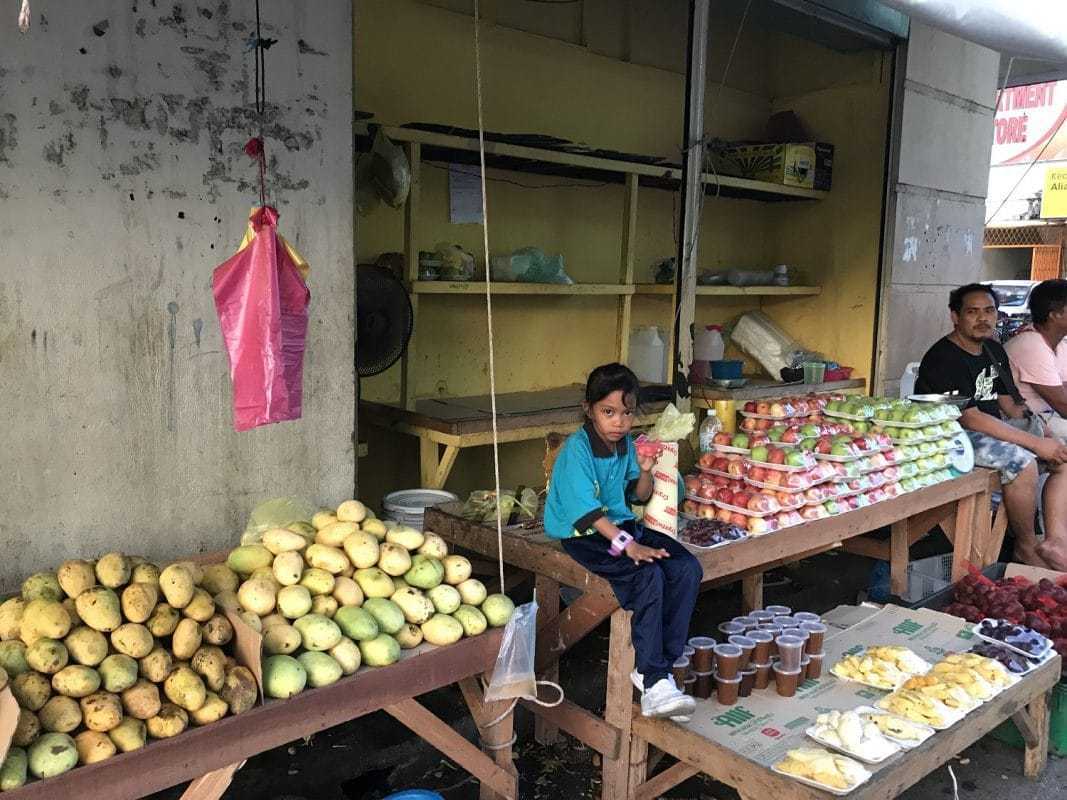 We didn’t spend much time in the city, rather we went on the surrounding islands by daily boats. Although I’ve been to many beautiful places and seen postcard-like beaches in the Maldives, these mini islands have stolen more into my heart. 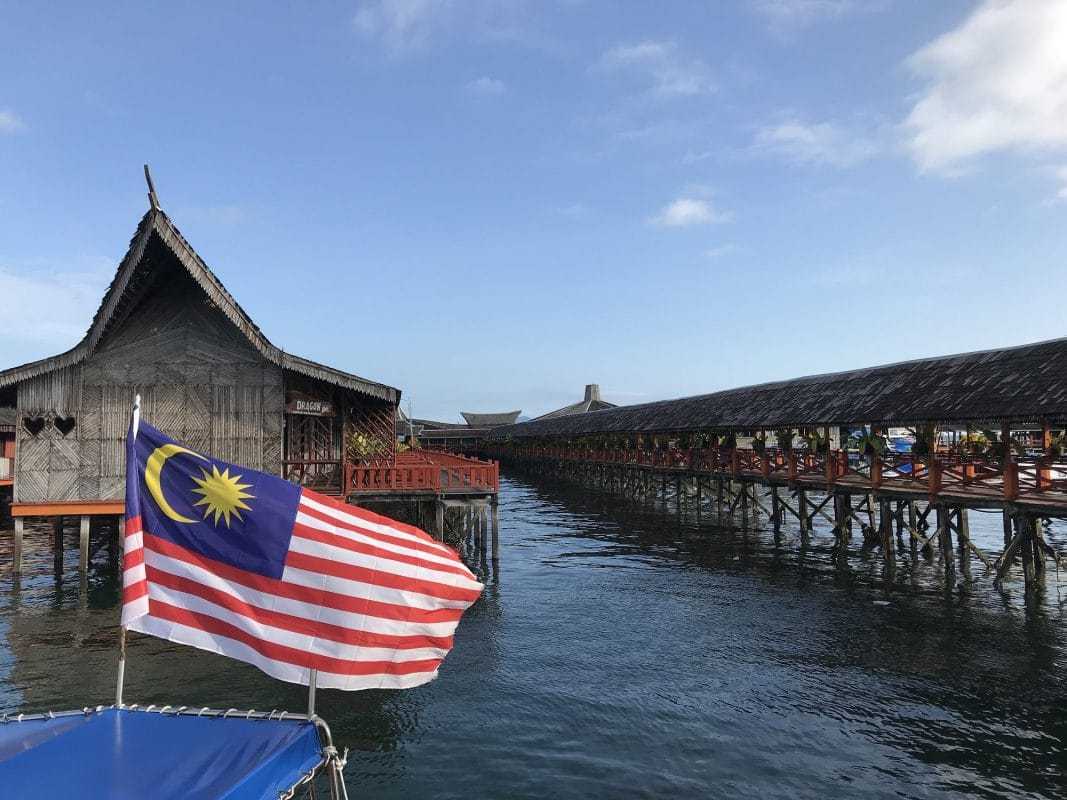 Less than half an hour’s boat ride from Semporna you can reach Borneo’s most iconic and photographed archipelago, the Tun Sakaran Marine Park. The area consists of eight islands and has amazingly colored water, which plays in all shades of blue. Each island is special because of a different reason, although we only went to four of the eight.

Pulau  Bodgaya  is the largest of them all and is mainly covered with forest, including mangrove trees.  The Islands of Sebangkat and Maiga are famous for their crystal-clear sandy beaches, the latter with coconut palm plantations. Sebangkat can be ideal for snorkelling and macro wildlife filming due to its seaweed coast. One of the most extraordinary islands of all is undoubtedly the Bohey Dulang, which literally needs to be climbed to reveal its true beauty. 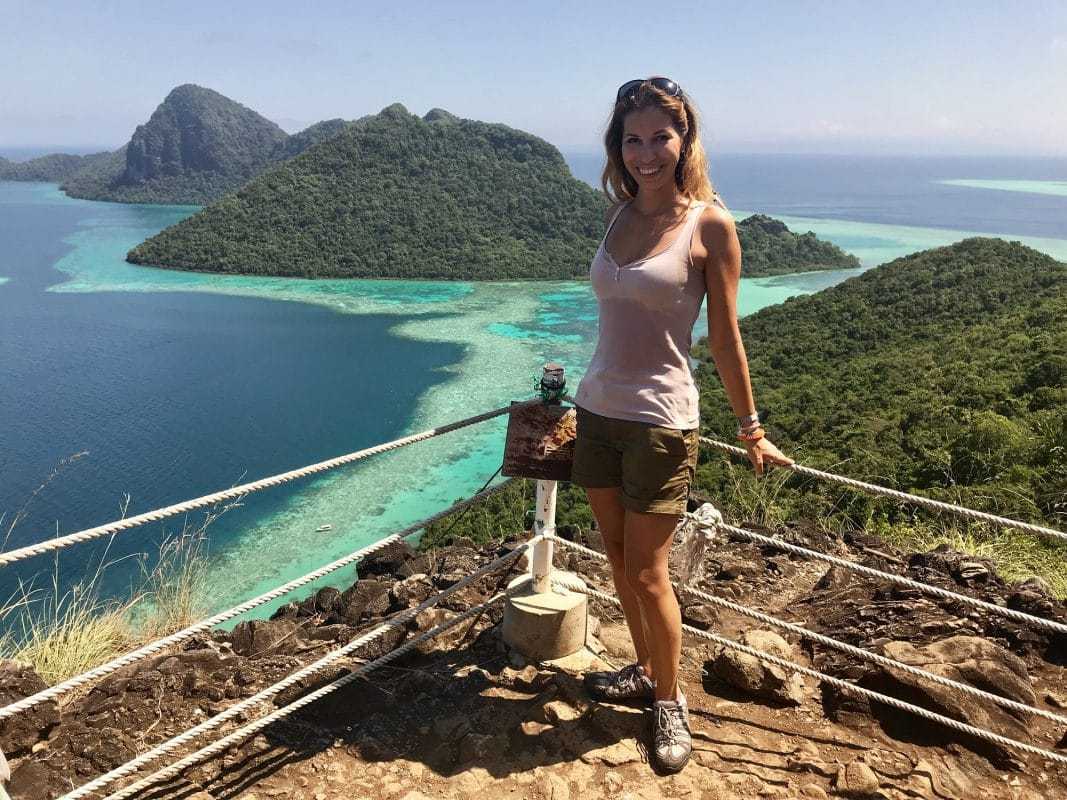 Conquering the summit requires some fitness, as the road leads up through rocks and tree roots, which is not a sweaty stunt at 70% humidity and 32 degrees. Up to the 353m high peak, however, looking out from the edge of the lookout, you immediately wonder if the suffering on the way up was worth it.  The water plays in indigo, sapphire blue and turquoise green surrounding with an underwater volcano crater. It’s so surreal view and I’m not overreasuring when I say it’s one of the wonders of the Celebes Sea.

The other wonder, though I’m certainly biased as a diver, lies beneath the surface. I didn’t bring equipment with me, but with snorkelling or free diving, you can see fantastic creatures around the islands of Sibuan and Mantabuan. Tt’s worth lying on top of the water and peeking at the bottom of the sea covered with soft and hard corals. 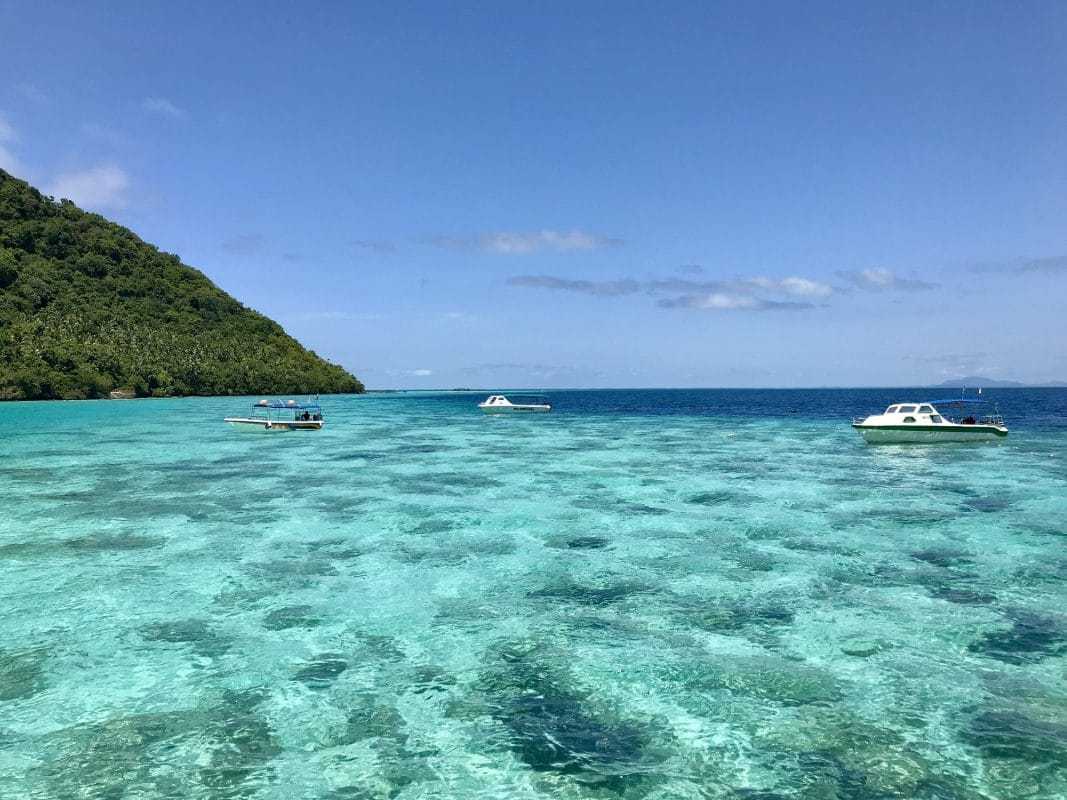 If we’re lucky – and we have been – you might as well run into a sleeping turtle. Although there are worrying reports of dynamite fishing, there has even been a tragic accident here recently,  Mabul  and Sipadan remain the most beautiful dive sites in the world, where I would like to return once not as a traveler, but as divers. 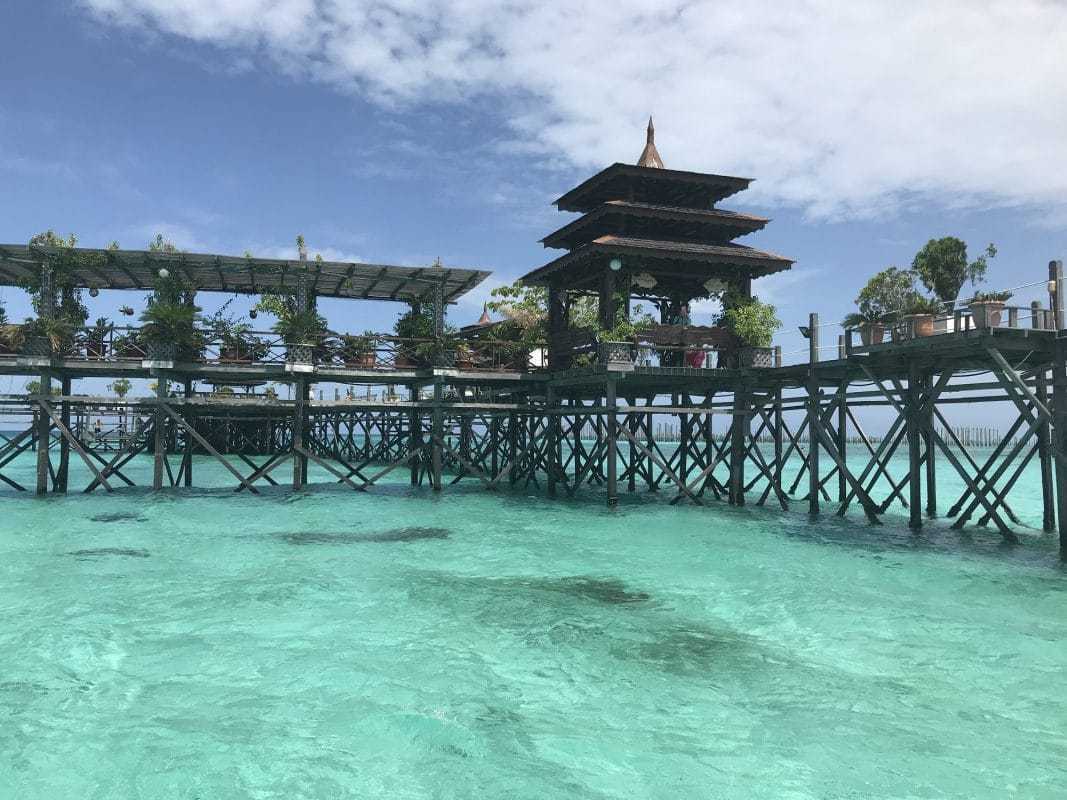 In addition to the orangutans, the other most anticipated experiences of my trip to Borneo was to meet the sea gypsies, also known as the Bajau people. They who live freely at sea. Who don’t know the concept of time and age. Those who chose to live in paradise: in their own paradise, freely, without wilderness or limitations. 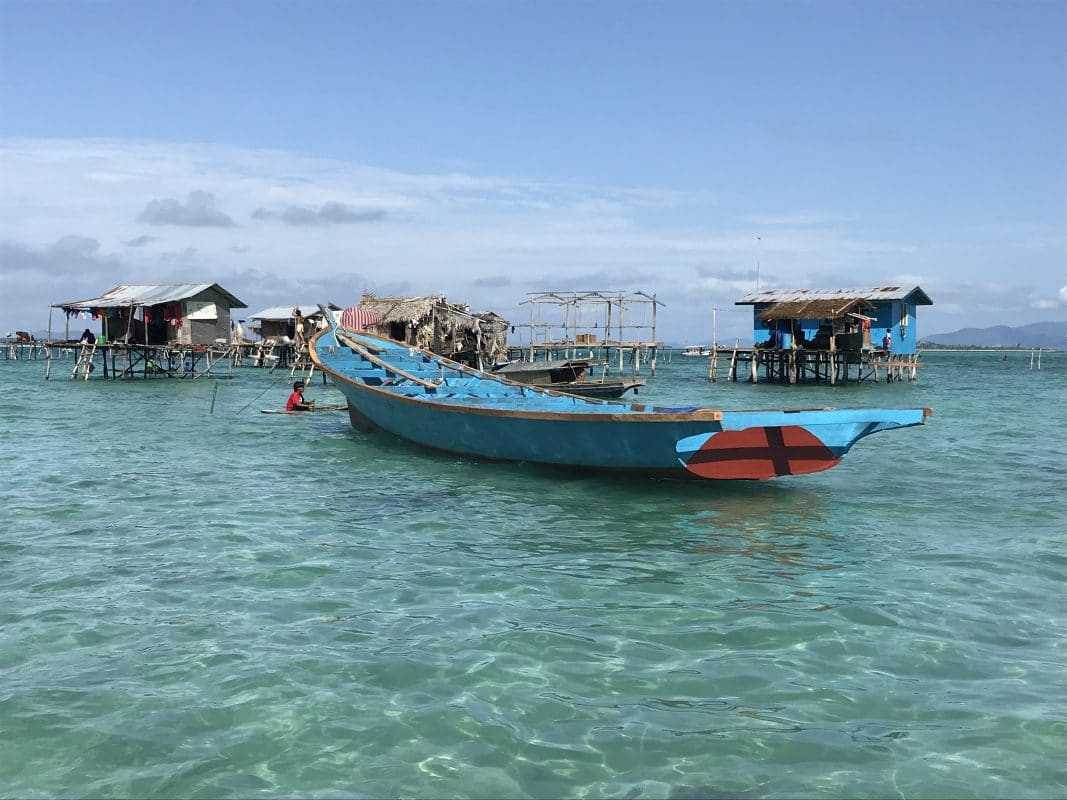 The Bajau people are born in the sea and die here, using Tetagan Island as an ancient burial ground. Traditionally, they live in pile houses or wooden boats and their lives are determined by changes of low tide and tide. Because of their wild and nomadic way of life, they are not accepted by the surrounding countries, including the Malaysian government, so they live in their own communities still today.

Most Bajau children don’t learn to read or write, but by the time they’re 8, they become professional hunters. Their eardras are perked when they are young, so that they can be down for up to 5 minutes at a depth of 20 meters without feeling the underwater pressure. 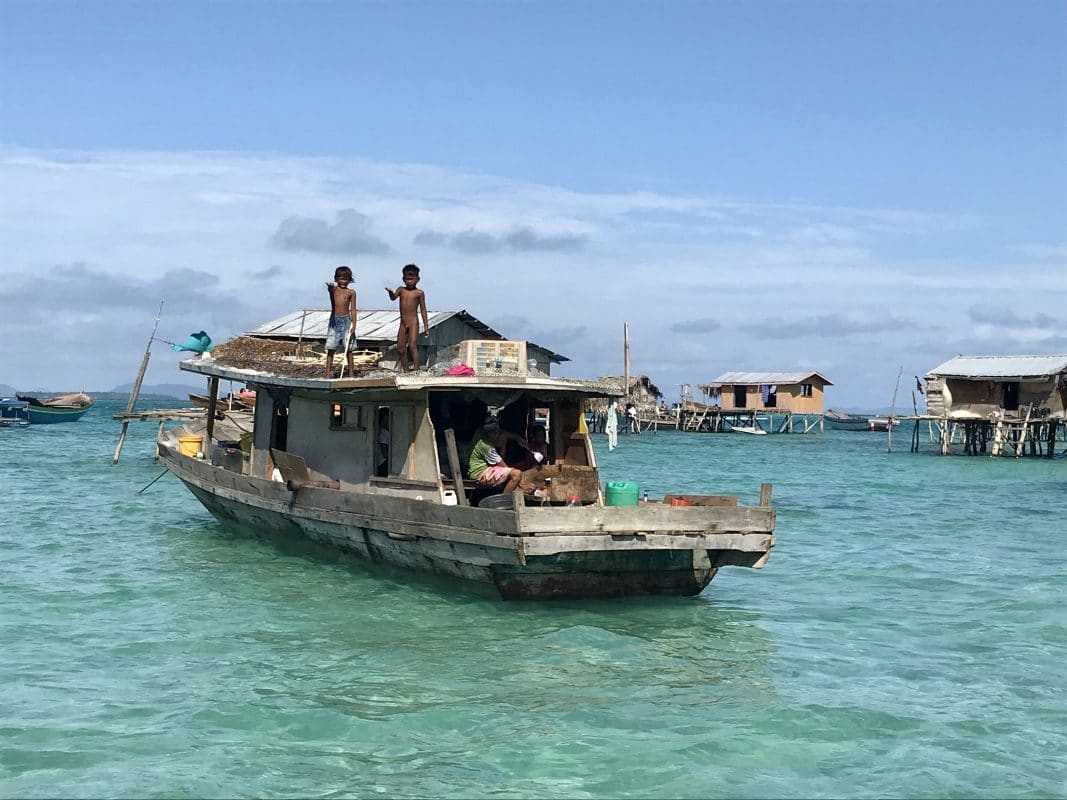 The eyes of the Bajau people underwater are as sharp as the needle. With their spear guns, they can drop the fish in no time, which, brought up in their boat, serve as food for the family as soup made from sea cucumbers. If they have a good catch the try to sell the fish on the surrounding islands accompanied by coconuts.  In order to protect their skin in the strong sunshine they use a mass made of rice and marine plants, which I saw mainly on faces of women and children.

Many of the sea gypsies have now settled on land, including on Selakan Island, where there is a Bajau village and school. Thanks to our local tour guide we took a tour of the village.

Borneo was, I think, the most defining journey of my life. I’ve seen fantastical things on the island that I’ve only ever seen in nature films before and that’s the experience I wanted to share with you, even if virtually. Among other things, this trip inspired me to start travel blogging.

In addition to the many positive experiences, I also encountered very worrying phenomena (e.g. plastic pollution, deforestation) on the island, which I could not go past without saying a word so I have written about them in several forums. As an eternal optimist, I trust bad processes can be stopped, because Borneo is really a jewel box on earth and we have the duty to preserve for the future generations.