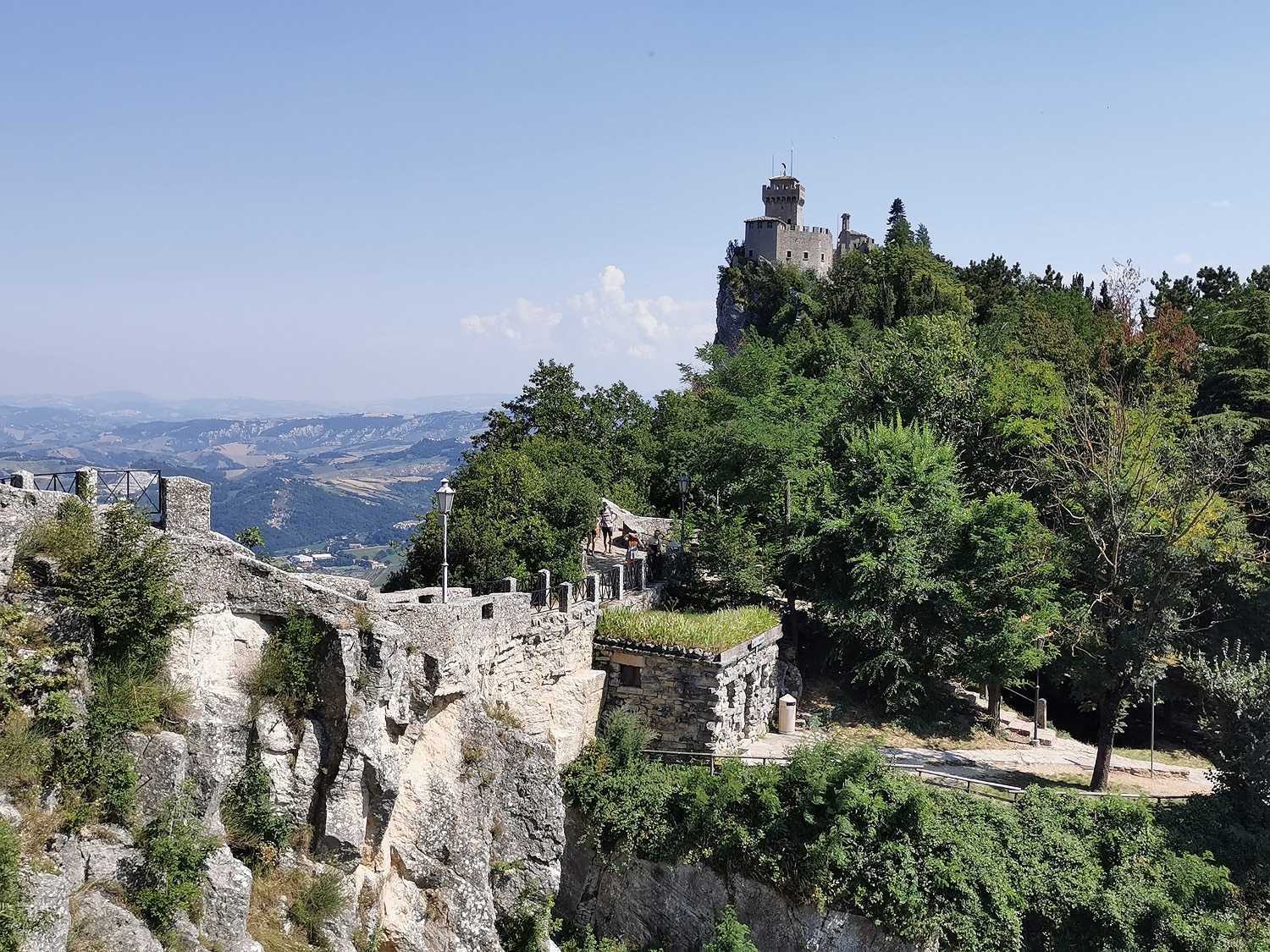 10 facts why you should visit to San Marino

Did you know that San Marino is one of the smallest states in the world, yet most of its territory is a UNESCO World Heritage Site? Or that Abraham Lincoln was an honorary citizen of the country? One thing is sure: while you are there, you won’t be able to stop taking dozens of panoramic photos from the top of Mount Titano.  What can we know about Europe’s number three mini-state?

I have to admit, I went to San Marino primarily to tick off another country from my bucket list. I know it’s not nice, but at least I’m honest. Upon arriving in the country, however, I fell into an incredibly charming world and the “tick off one more place where I have been to” plan was immediately dissipated. To avoid falling into this preliminary I brought 10 interesting things about why it is worth visiting San Marino. 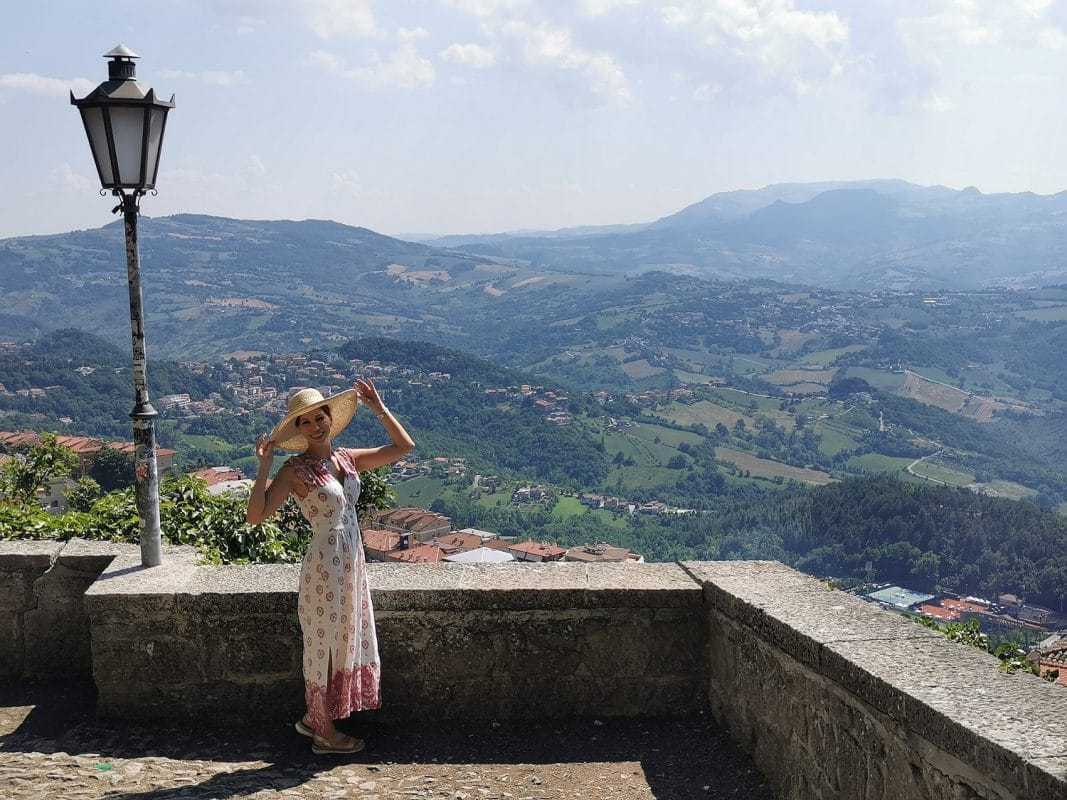 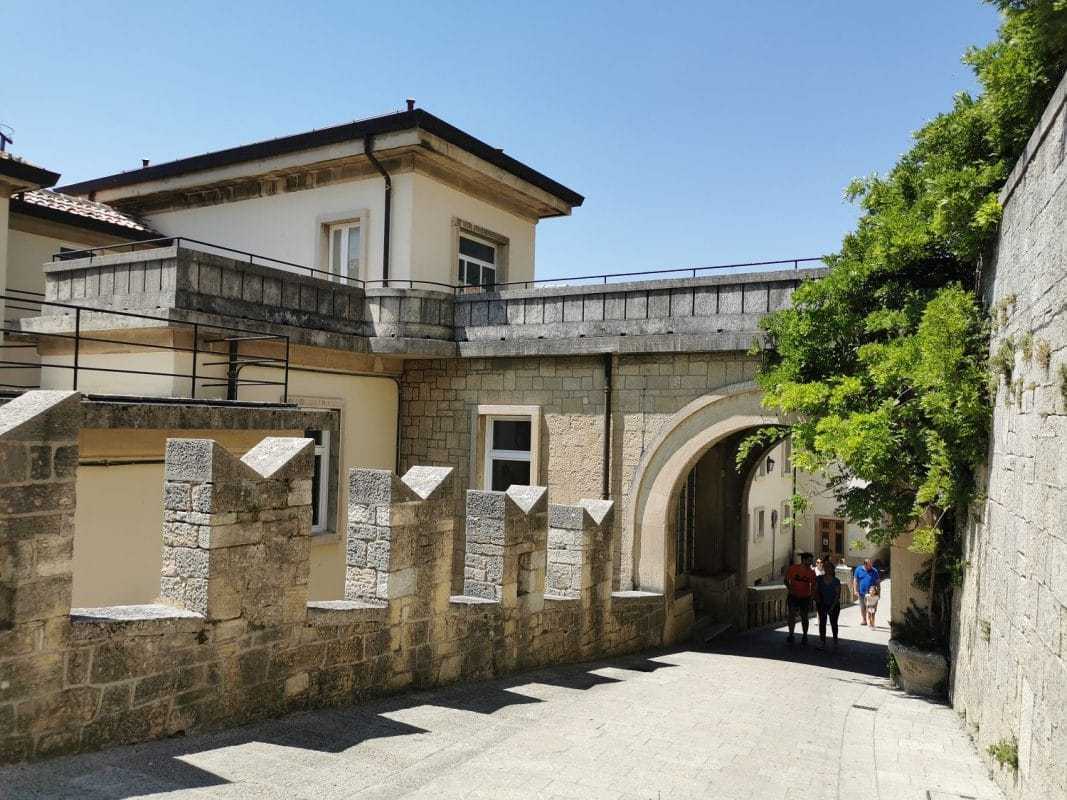 1. This is the world’s oldest republic – founded in 301- and is also the only state in former Italy that has survived throughout history. The country itself lies entirely within Italy, wedged between the provinces of Emilia-Romagna and Marche. With an area of 61 km2, it is the fifth smallest inhabited country in the world – after Vatican, Monaco, Nauru and Tuvalu – but one of the most densely populated – 33,000 people. It has virtually no flat area, the whole country lies in the mountainous countryside. 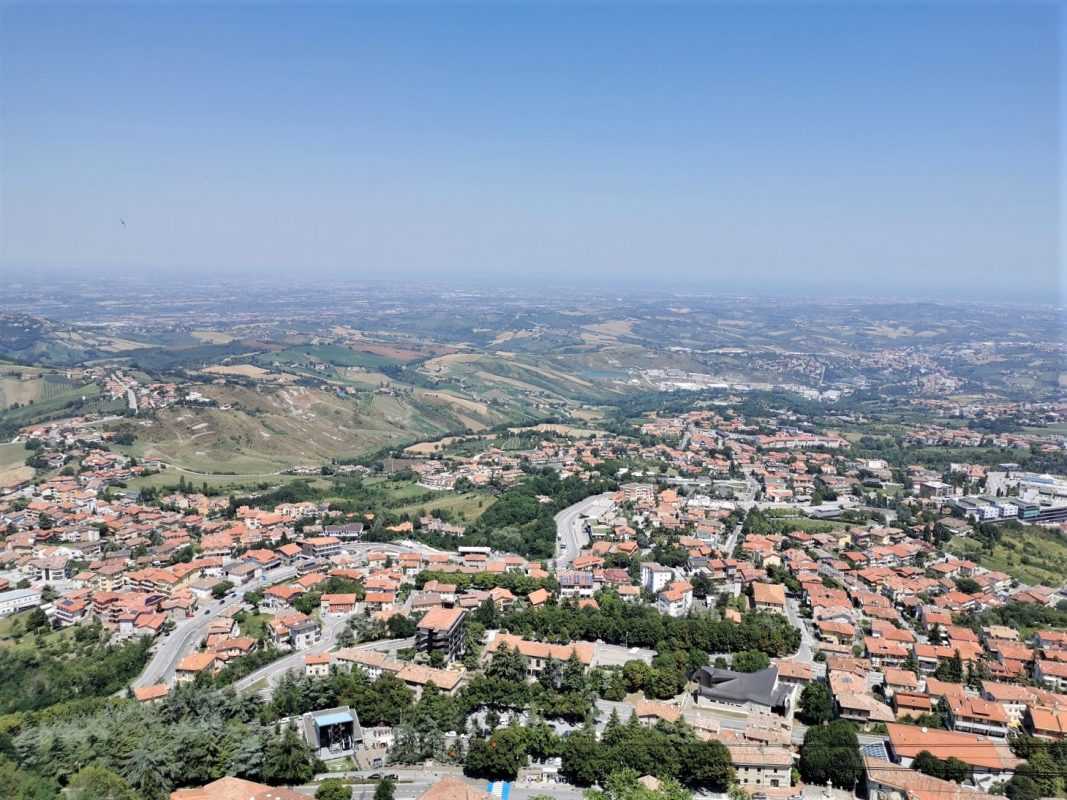 2. San Marino did not participate in The First World War and remained neutral in the second. In absence of wars, the medieval character of the capital remained intact and made the historic old town at the top of Mount Titano a UNESCO World Heritage Site. The country does not have its own army although there is a minimal military presence in the country, e.g. changing the guard in front of the Palazzo Pubblico but this is symbolic rather than a defensive thing. 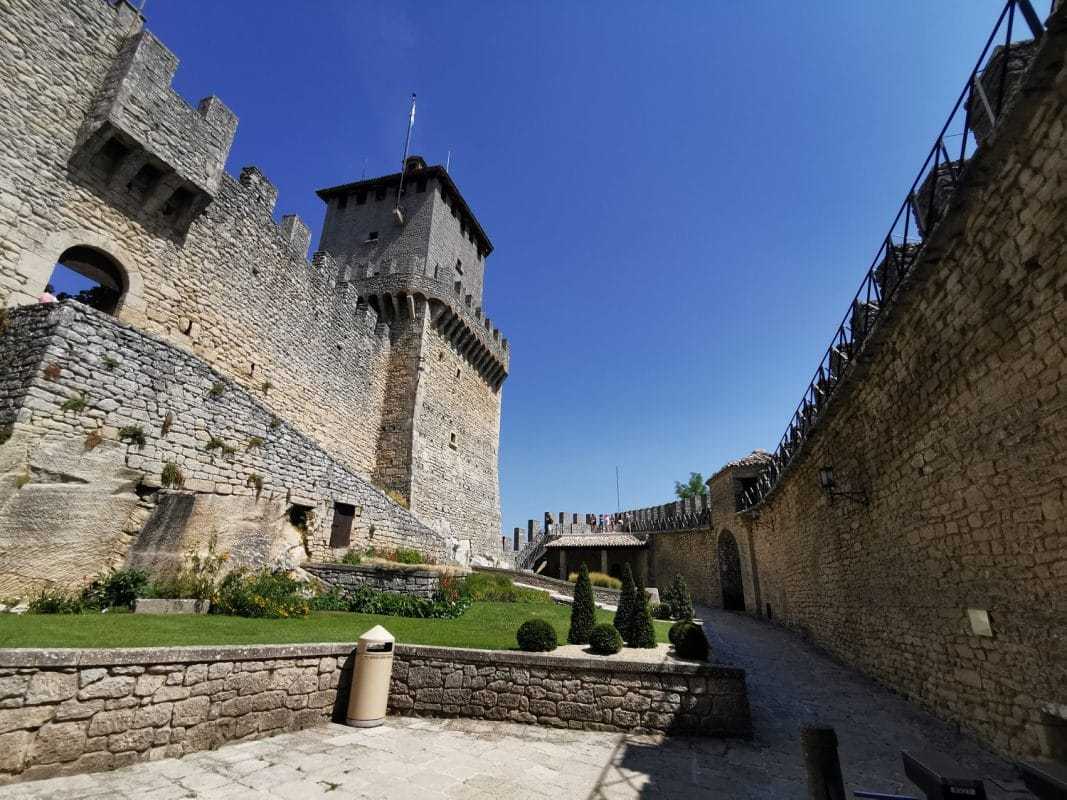 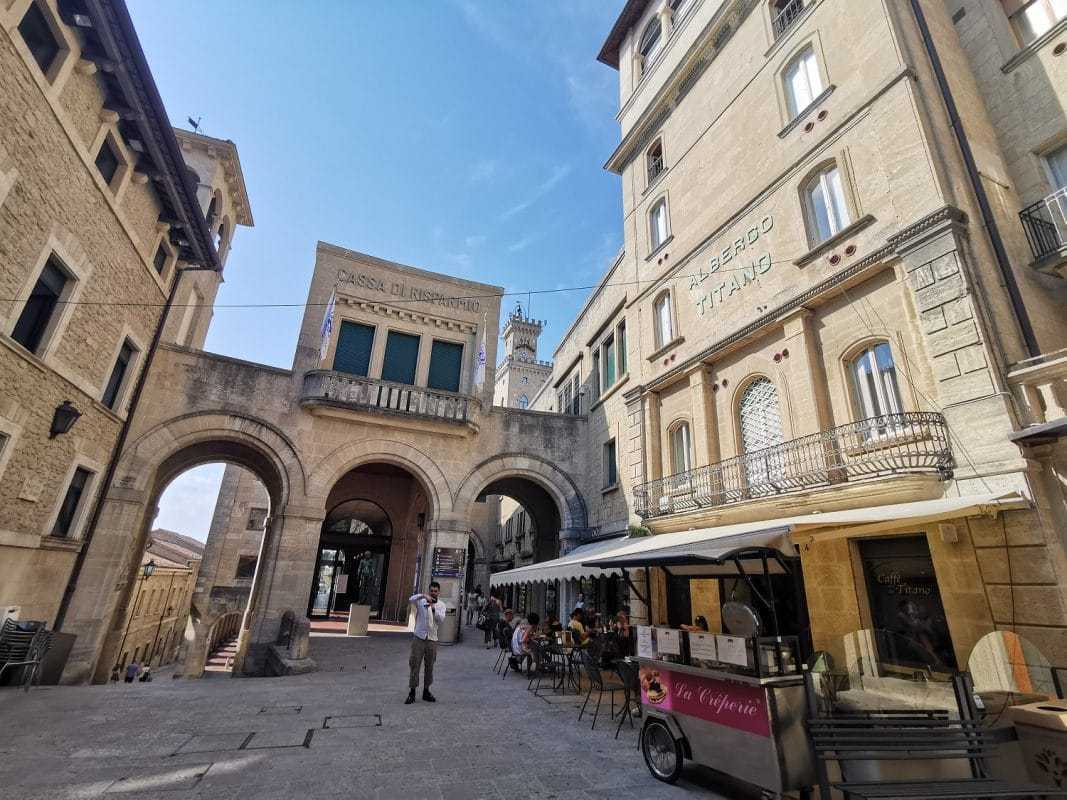 Despite the lack of an army San Marino is prepared for any war at least in terms of souvenirs. Almost every 5th store has replica weapons on display, where everything from AK47 to bows to swords is available. Let’s just say I was wondering how you’d like to give up these weapons at the airport as hand luggage. Because you can’t fold a bow into a suitcase, that’s for sure.

3. From the top of Mount Titano, you have an amazing view of the lower areas of the country. The easiest way to get to the mountain is to take the cable car (Funivia) from Borgo Maggiore, where we also left the car. I read on a Hungarian travel site that it is worth putting the car down here if someone does not want to deal with the parking a lot. Now I strongly refute this saying, because we circled for 1 hour with others– true, we came on a weekend – and there was no free space in the otherwise not-so-large paid parking area. 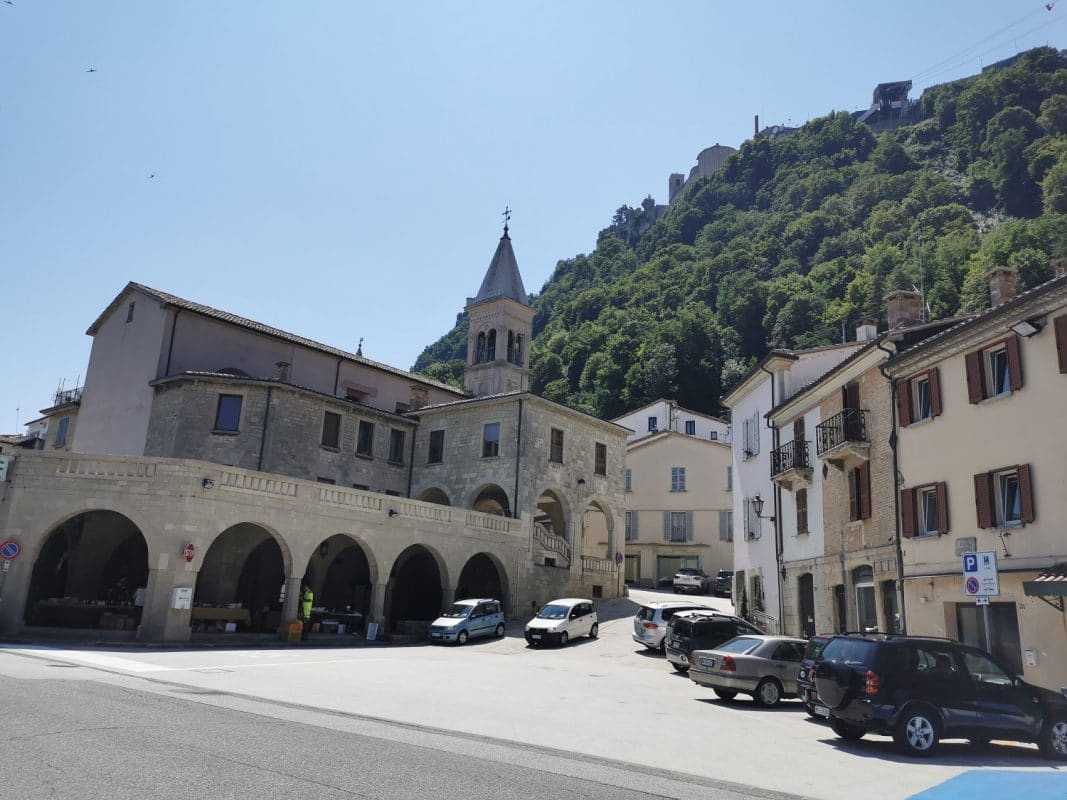 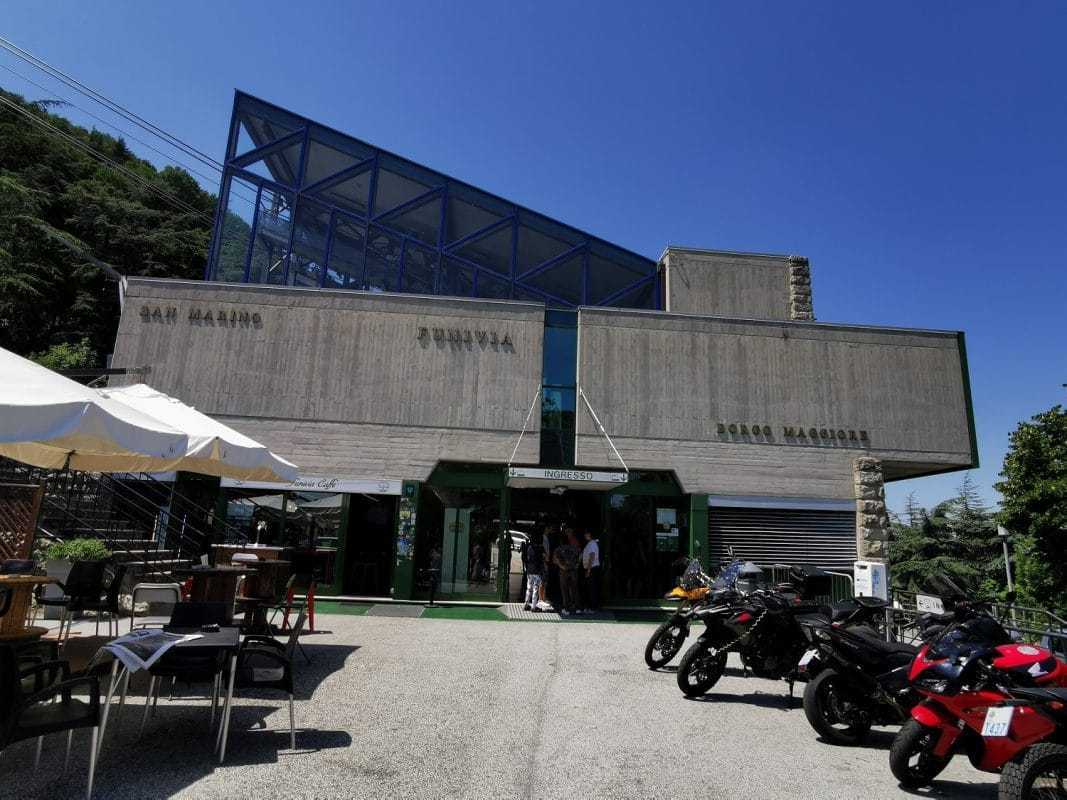 In other parts of the city, the typical Italian parking solution – the paper clock display in the window that allows 1,5 hours free parking – is not an option here. As you can’t just jump off the mountain and adjust it So it’s a good idea to throw money into the parking machine for at least kb 4-5 hours in advance (1 hour is about €1.30) to comfortably have time to look upstairs. The lift is very modern and back and forth it costs €4.50 and takes the visitors to the top of the 739-meter Mount Titano.

4. Panorama and panorama, i.e. the three towers of San Marino. Even though I have fear of heights, the view is quite impressive both from the lookout and from the three towers (Guaita, Cesta, Montale). The first two towers can only be visited with a combined ticket for €6.50, while the third is closed to tourists. 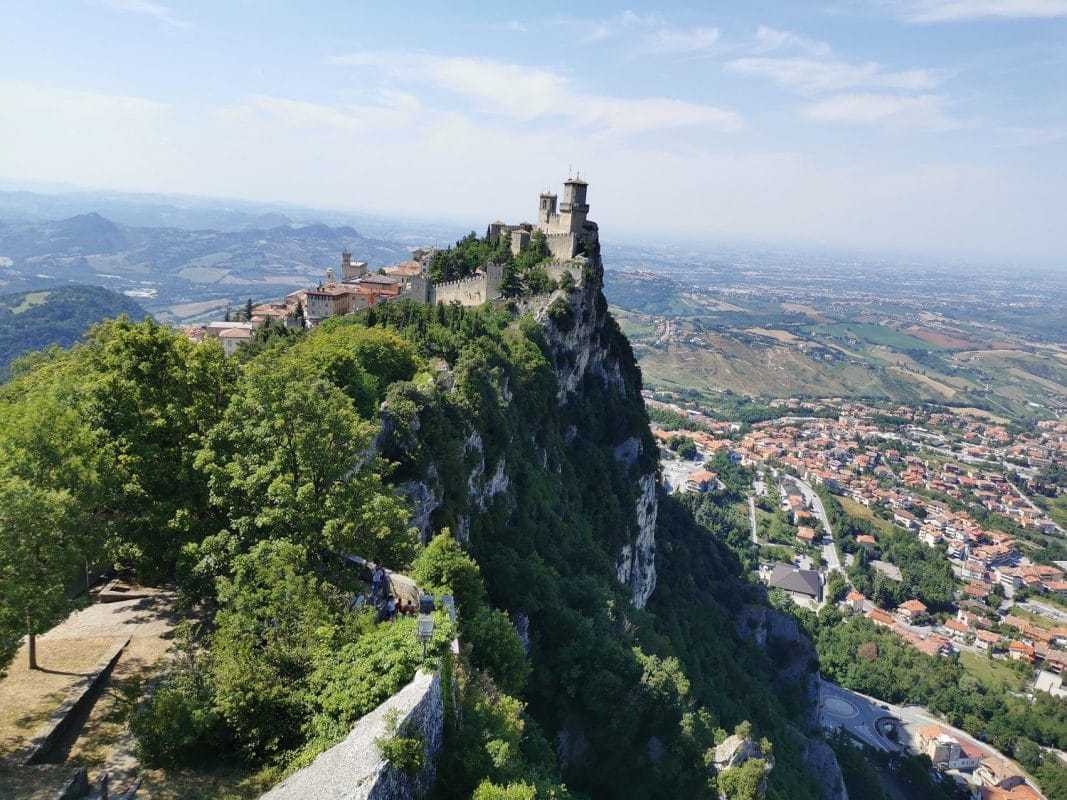 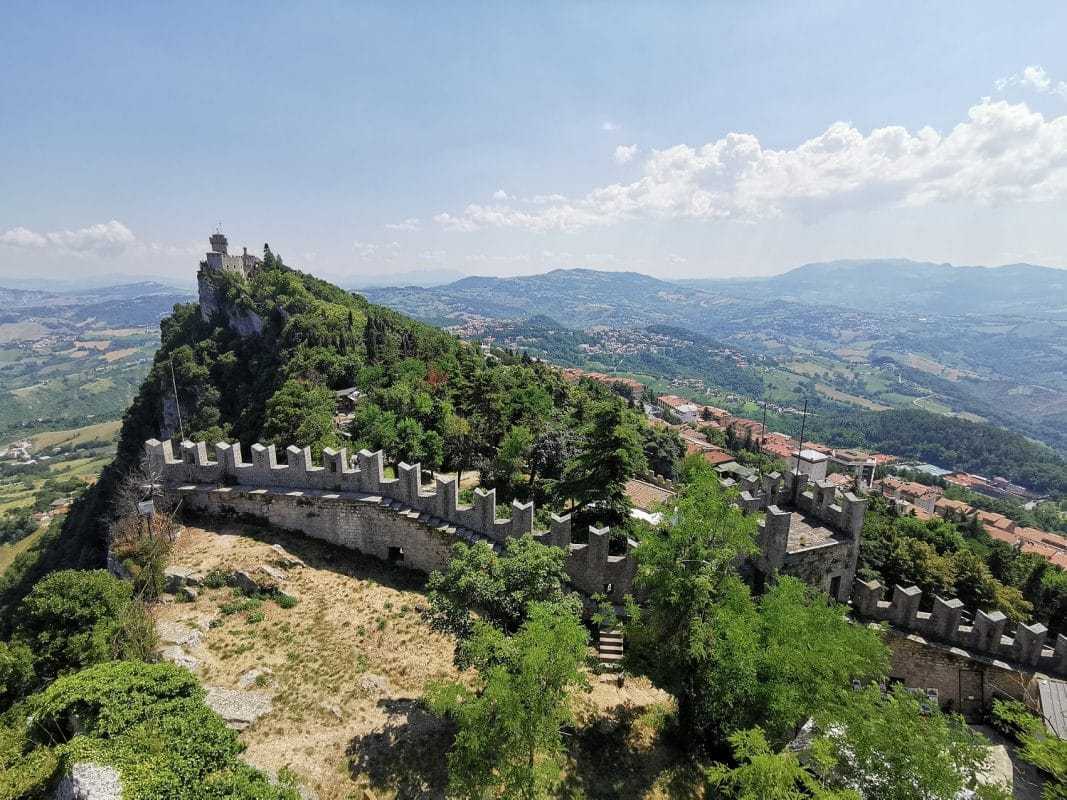 Panoramically for me, Cesta was more captivating than Guaita, but both are worth seeing because you will see absolutely different from above. Interestingly, the three towers also appear in the Flag of San Marino between the light blue and white stripes. The colors represent the sky and the snowy Mount  Titano. 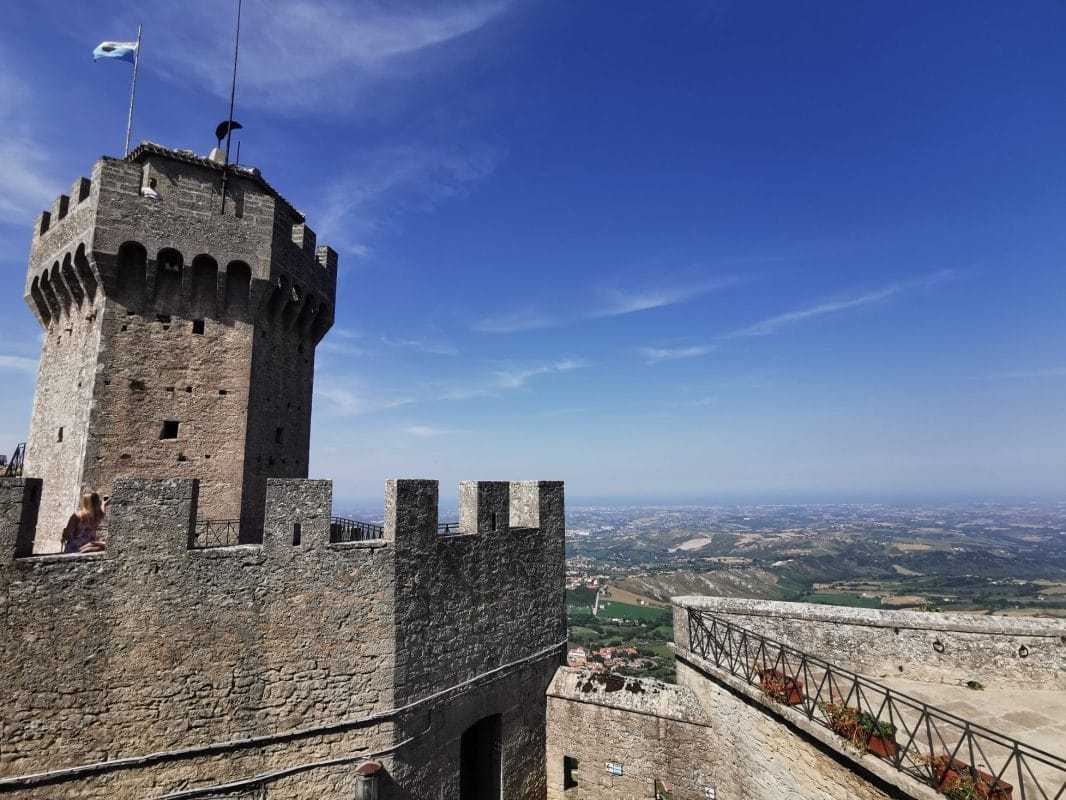 5. Among stamp collectors around the world, San Marino’s stamp is highly demanded, and its price varies up to $5-600. San Marino was probably the first country in the world to establish a regular postal service in 1607, and in 1877 it began printing and using stamps. Souvenir shops offer many San Marino stamp and coin collections, but if you want to get something more special, take your passport to the tourist information points, where it’s stamped for €5 proving you’ve been here. I  didn’t take a passport with me, which I regret a little afterward because although San Marino is not an EU member, there are no border controls. 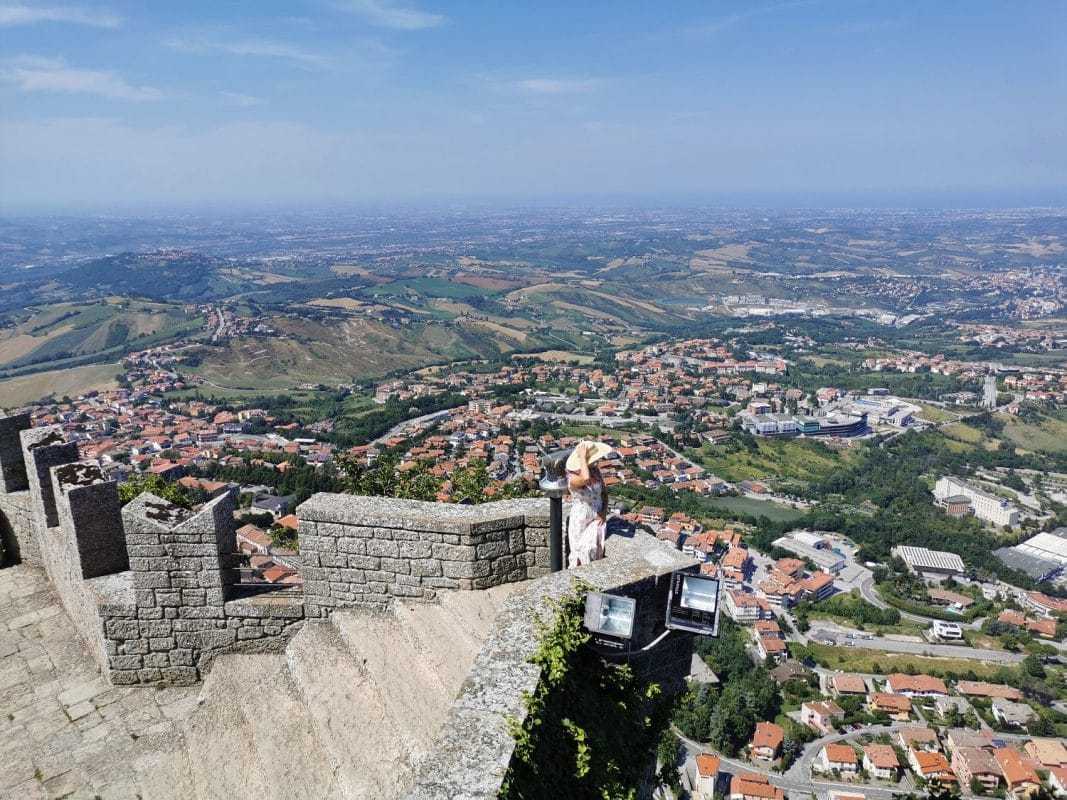 6. Abraham Lincoln, President of the United States, was offered honorary Citizenship of San Marino in 1861 following an exchange of letters. To the delight of this, Lincoln appeared three times on San Marino stamps with a sentence that was included in his letter: “Although small, it is undoubtedly one of the most honored states in the history of the world. ”

Dual citizenship in San Marino is still not possible. You can only become a citizen if at least one of your parents is from San Marino. The official language of the country is Italian and due to the proximity of the two countries, many Italians live here, which fortunately also manifests itself in gastronomy.

If you are in San Marino, you can enjoy coffee, cookies, or pasta in one of the panoramic restaurants. We sat at La Capanna for lunch from where you can see the plateau below Monte Titano. The price level is quite friendly here despite the panorama but it is cheaper than Rimini. A pizza costs €5 and the prices for pasta range from €6 to €7. 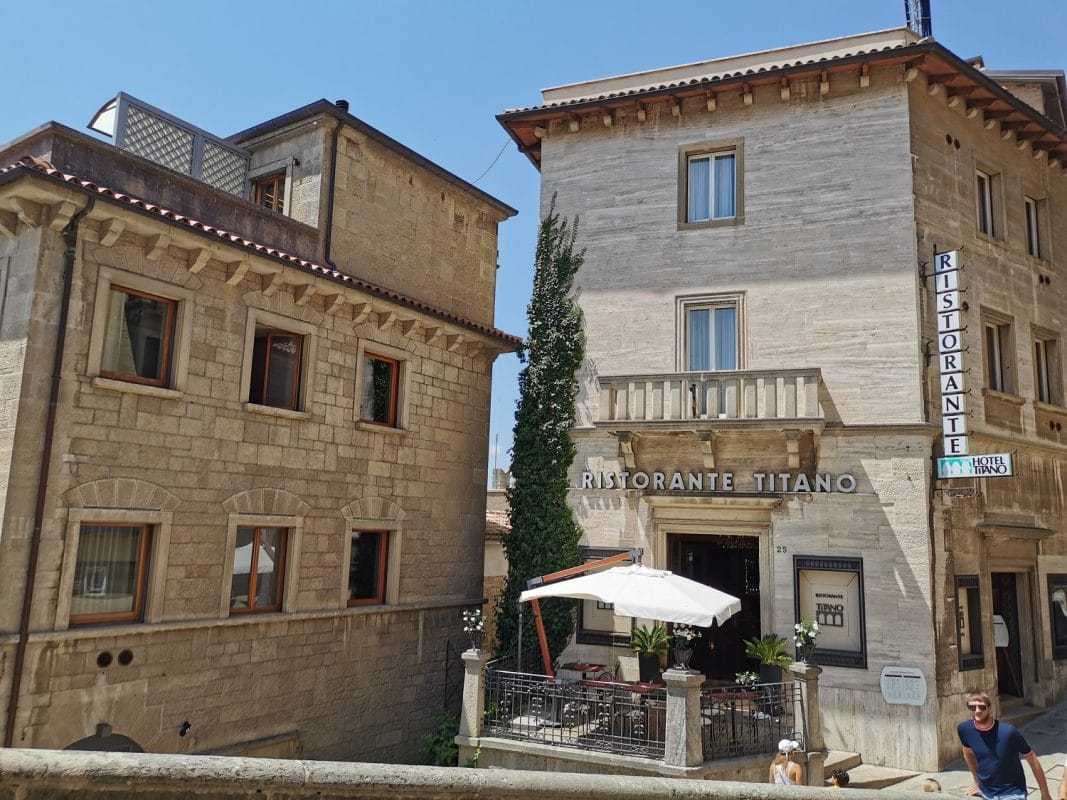 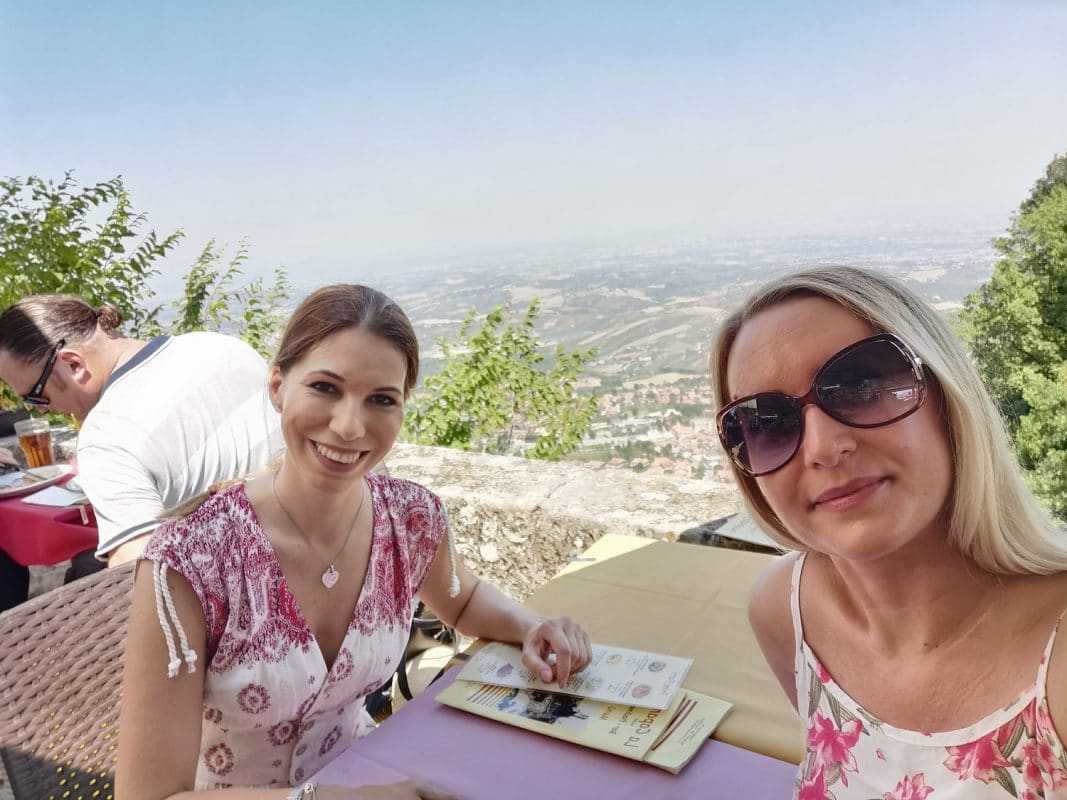 7. Ayrton Senna, the legendary Formula One driver, died during the San Marino Old Grand Prix in 1994. Interestingly although it was called San Marin Grand Prix and competitions were held until 2006, the track is not here but in Italy in Imola. You can’t drive into the historic center of San Marino, you can leave the car in the external parking lots next to the castle walls. In the narrow alleyways, it would not make much sense to turn around by car anyway, it is much cozier to get lost in the streets, take a look into the courtyard of a house, where you will find the Mediterranean feeling with colorful palettes and flowers. 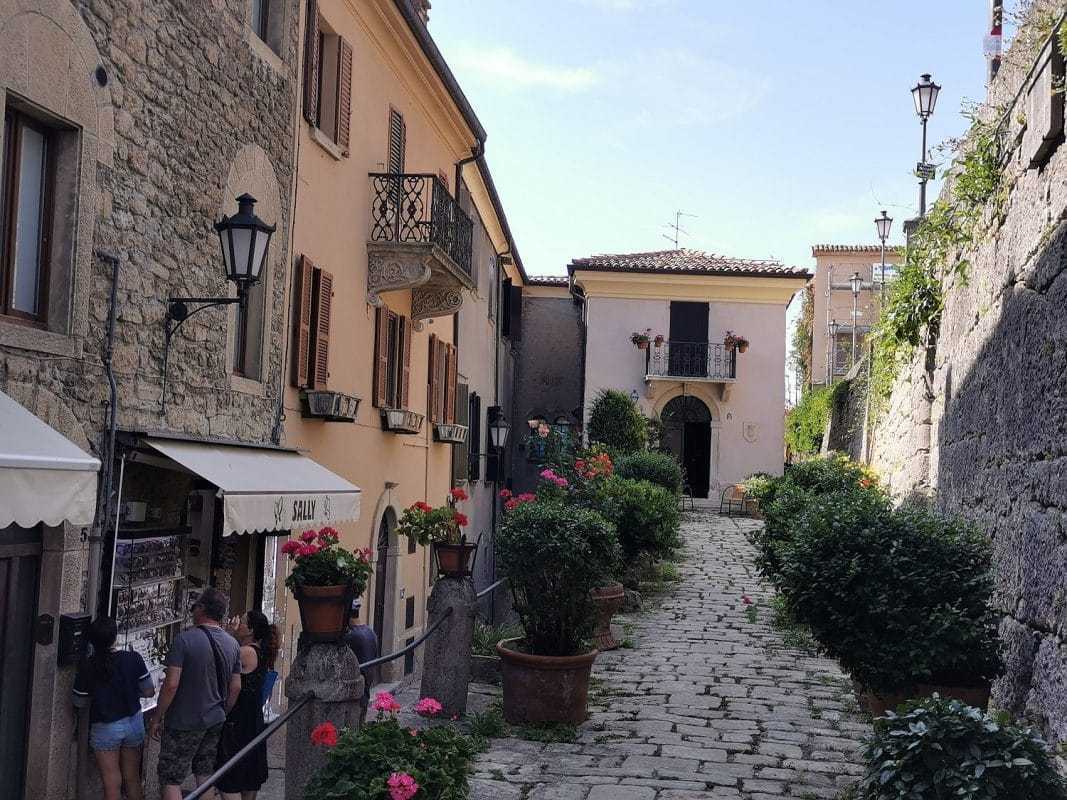 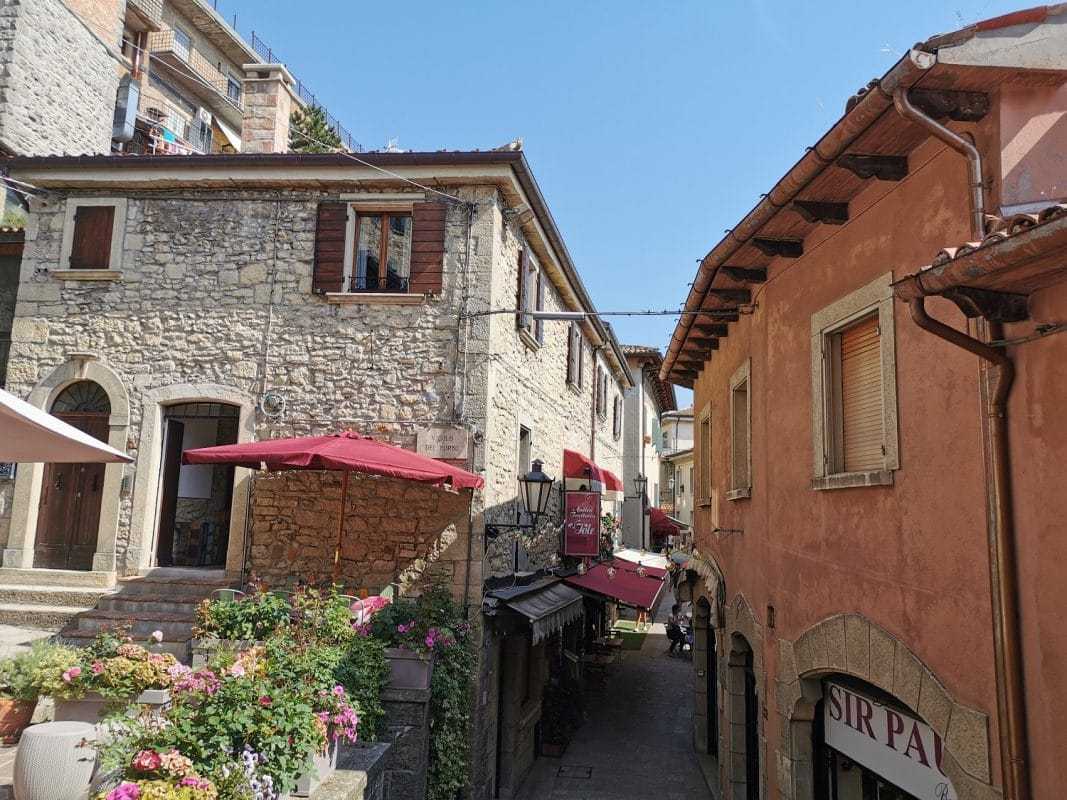 8. Freedom is a San Marino style. For many centuries, locals have seen themselves as sovereign, independent states. They were under foreign rule only for a year throughout history and it immediately ended in a rebellion. Pope Clement quickly restored the country’s independence in 1740. Although Napoleon offered to expand the country’s territory in 1797,  but the population rejected this “friendly”  gesture. The main square of San Marino is called Piazza della Libertà for this reason.  In the middle of the square, a white marble statue stands, which promotes independence, while the Palazzo Pubblico is also open to tourists. Speaking of governance, San Marino had the most female leaders in the world. Women have been elected as heads of the state 17 times since 1960. The assembly has 60 members and two heads of state at the same time to avoid the abuse of power. 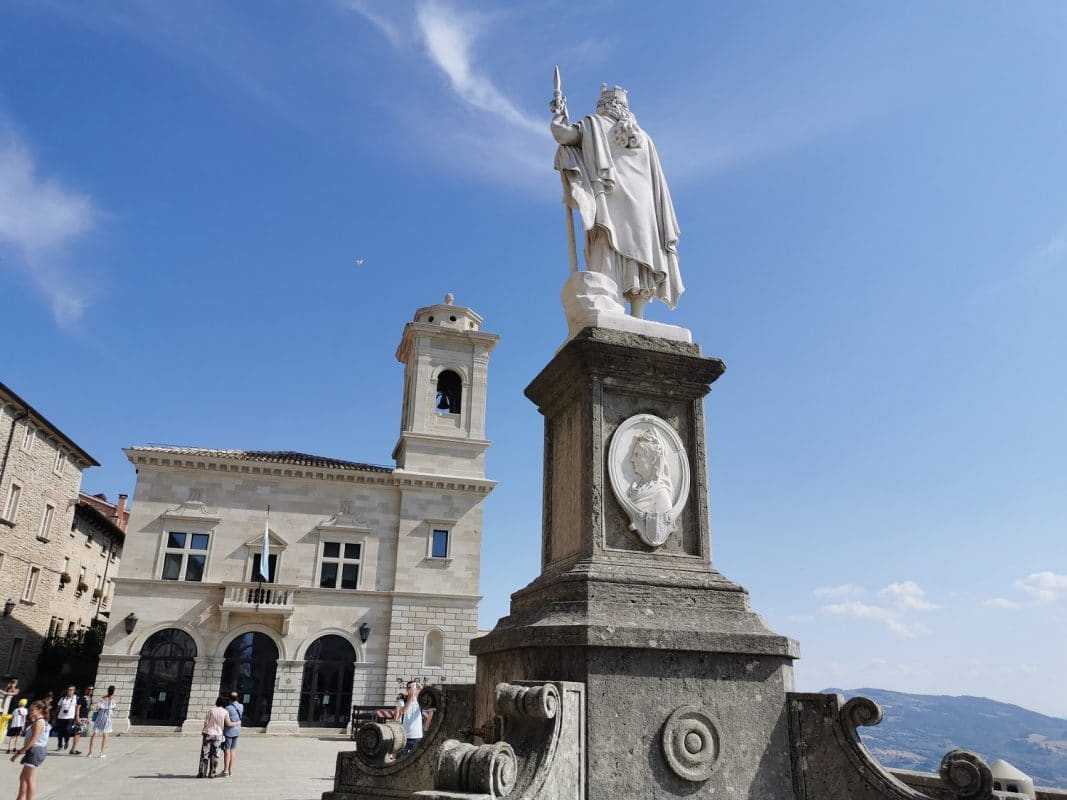 9. San Marino is a tiny state, but its faith is greater than its territory. In the absence of the Catholic and Episcopal system (bishopric), 97% of the population belongs to the Universal Catholic Church and re under the authority of the Pope of Rome. The San Marino Basilica belongs also to the Pope of Rome and its neoclassical building of the 19th century reminds me mostly of a courthouse or stock exchange palace. We didn’t get inside because there was just a wedding. 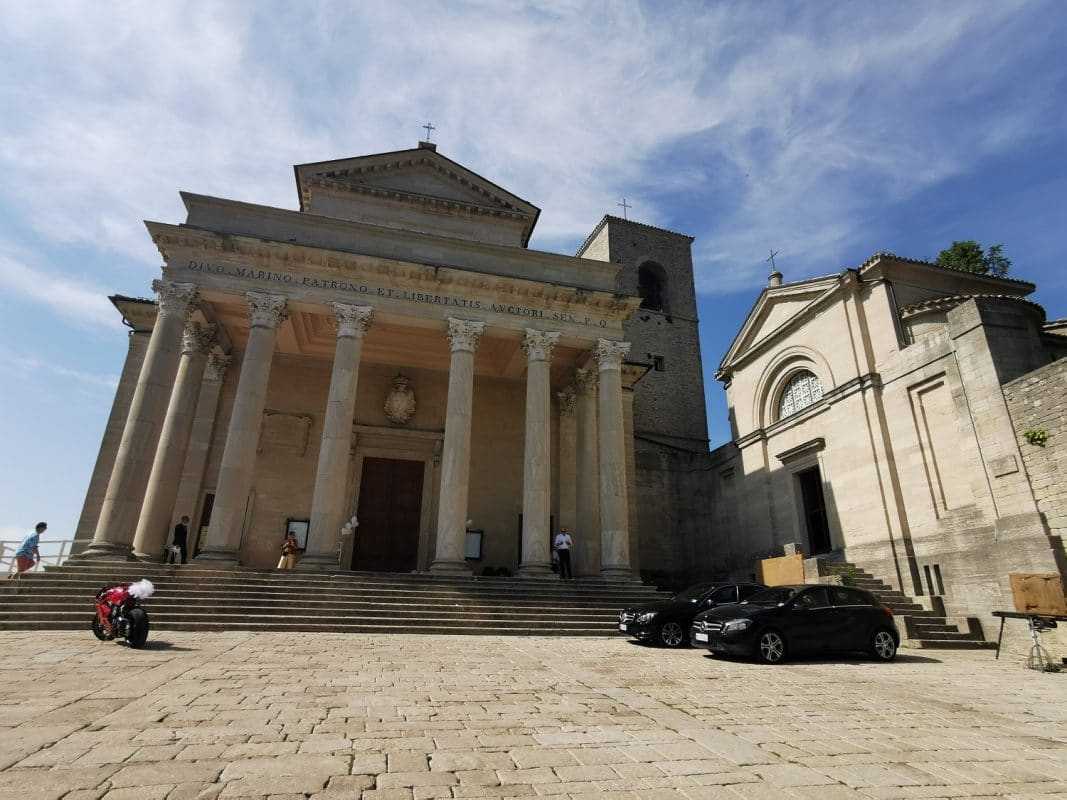 9+1. If you haven’t taken 50 panoramic pictures of Mount Titano, you haven’t even been to San Marino. Dive in and enjoy postcard-level panoramas from all over the mountain and make sure you don’t go exploring San Marino without a camera or phone.