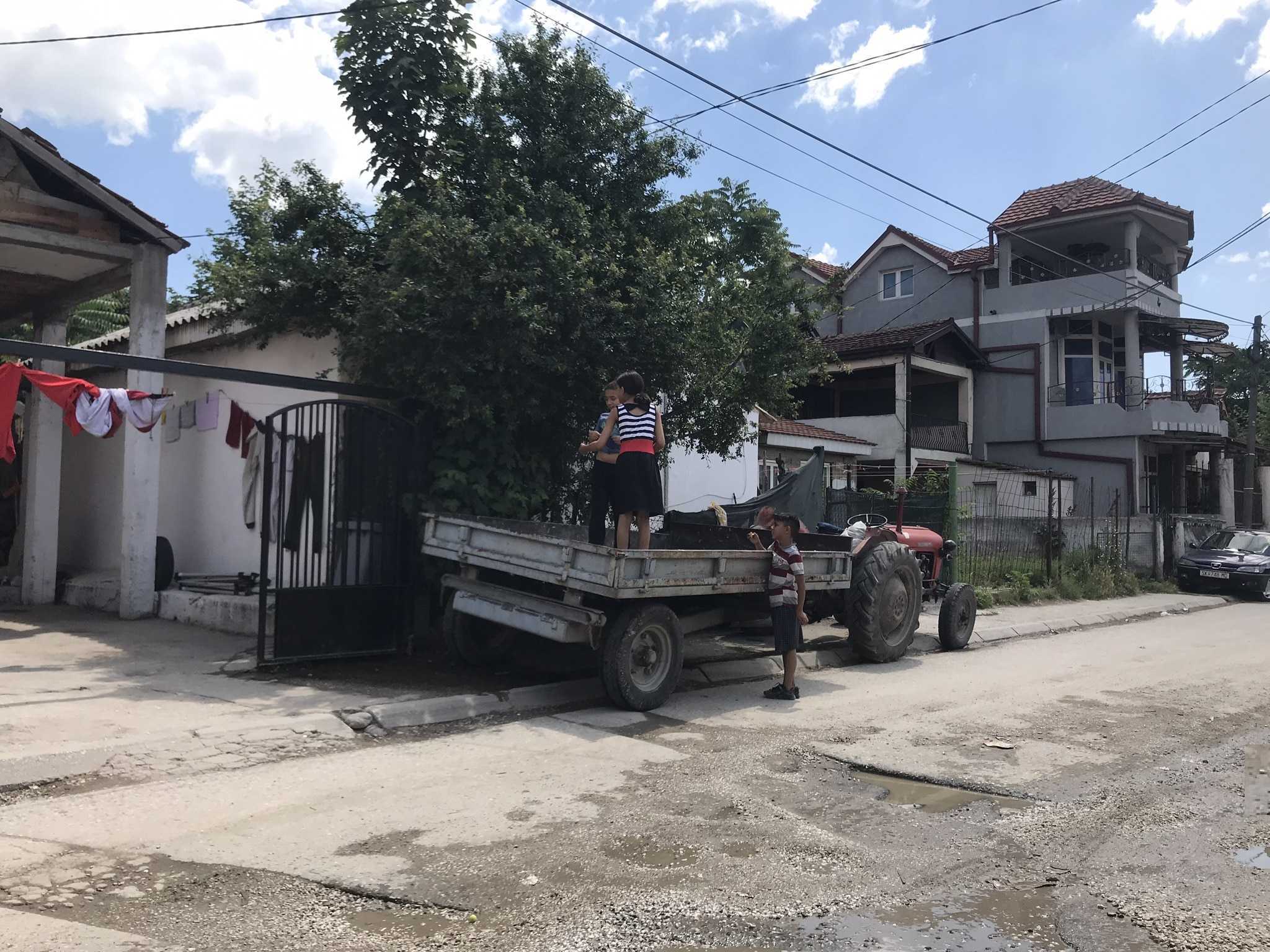 How does life look like in a place where 80% of people is Roma? Not in a village, but in the whole part of the city that also has individual rights. Who are they and what kind of vision do they have? How did the city become the capital of the Roma people at all?I first met with the name of Suto Orizari during my university Ph.D. studies. One of my classmates held a presentation and shared his research results about the world’s largest Roma community. Although it was a couple of years ago, the image of the Roma living in deep poverty was still vividly in me. 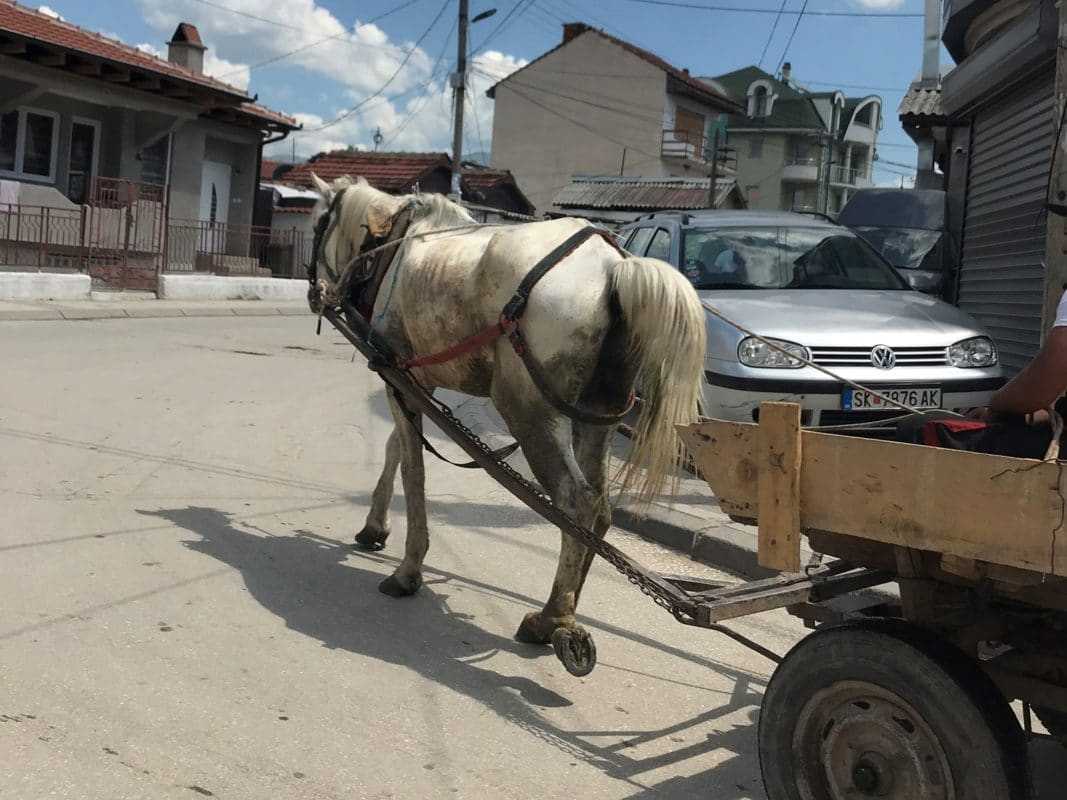 The second meeting with Sutka (it’s a more common name used for the city part) took place in the historic center of Skopje, when I saw a 3-4-year-old child without his mom begging on the old Stone Bridge. Later on, Roma girls were walking around the Carsija Bazaar, who I did not understand why, but asked for empty PET bottles from passengers. 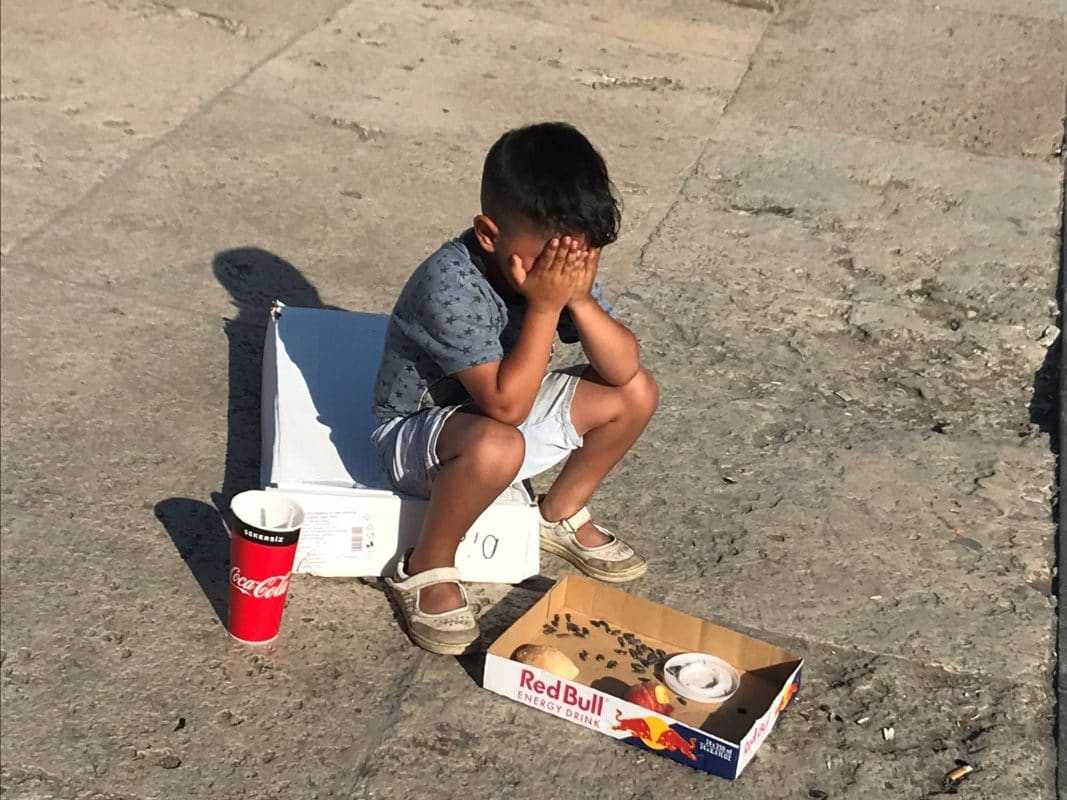 The third meeting with Suto Orizari has been preceded by conscious and lengthy preparation. When I decided travelling to North Macedonia, I know I wish to see and experience with my own eyes how life is going in the world’s largest Roma community, with an estimated 35-40,000 Roma people. It’s only an estimation as the latest census was in 2002 and still many have no official paper, so they practically do not exist in the statistics. 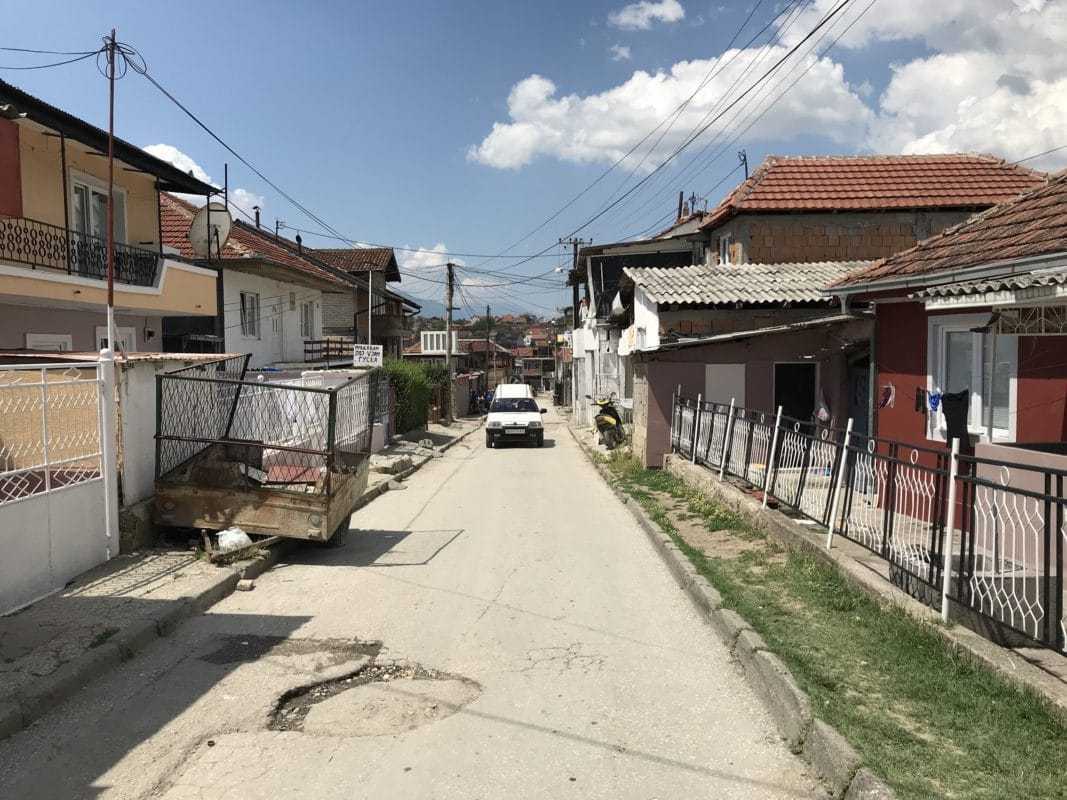 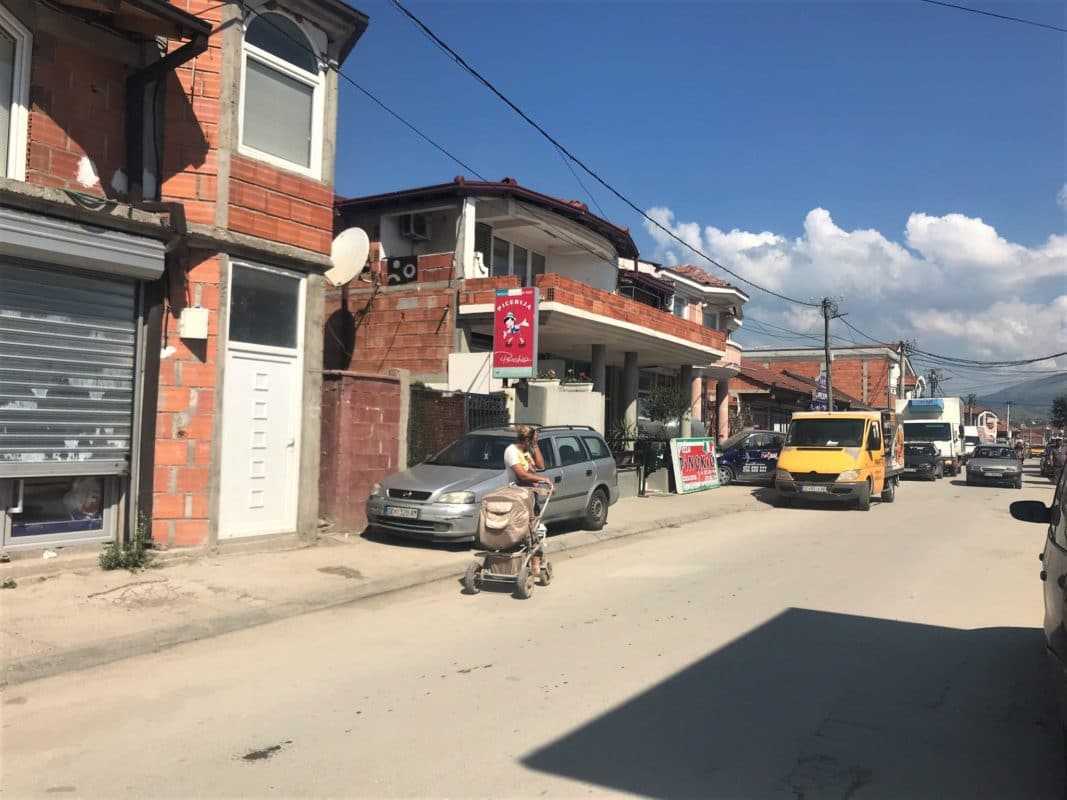 Luckily the Local Municipality of Suto Orizari was open to a personal meeting and interview, furthermore, they gave me a helping hand in visiting the quarter.
I’m sharing now the story of this visit along with the pictures taken during the walk, how Suto Orizari, the Roma capital of the world, was from my point of view. 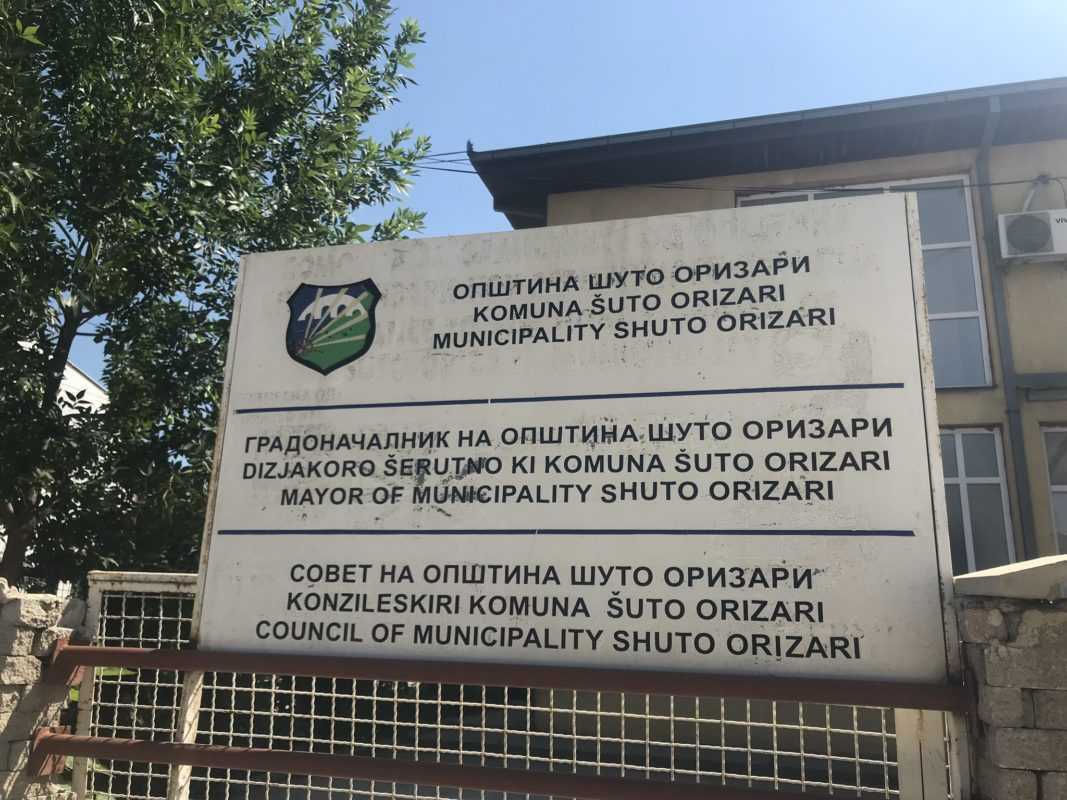 We park down with our rented in front of the municipality building located in the heart of Sutka to meet Srdjan Amet, Head of Local Development of the Municipality. As a tourist, I start immediately taking pictures with my mobile but soon. Soon somebody comes closer and says to me no photos here and I must respect it. So instead of professional pictures I can share only captured moments of life that take you bringer to Sutka. The official flag of Suto Orizari, where the blue is the sky, the green symbolizes the earth, while the red wheel, an Indian chakra, refers to the origin. The Roma people are considered to be Europe’s largest minority community and arrived at the European continent from India 1000 years ago. Their number is close to 12 million according to the European Council, of which 200,000 live in the territory of North Macedonia. 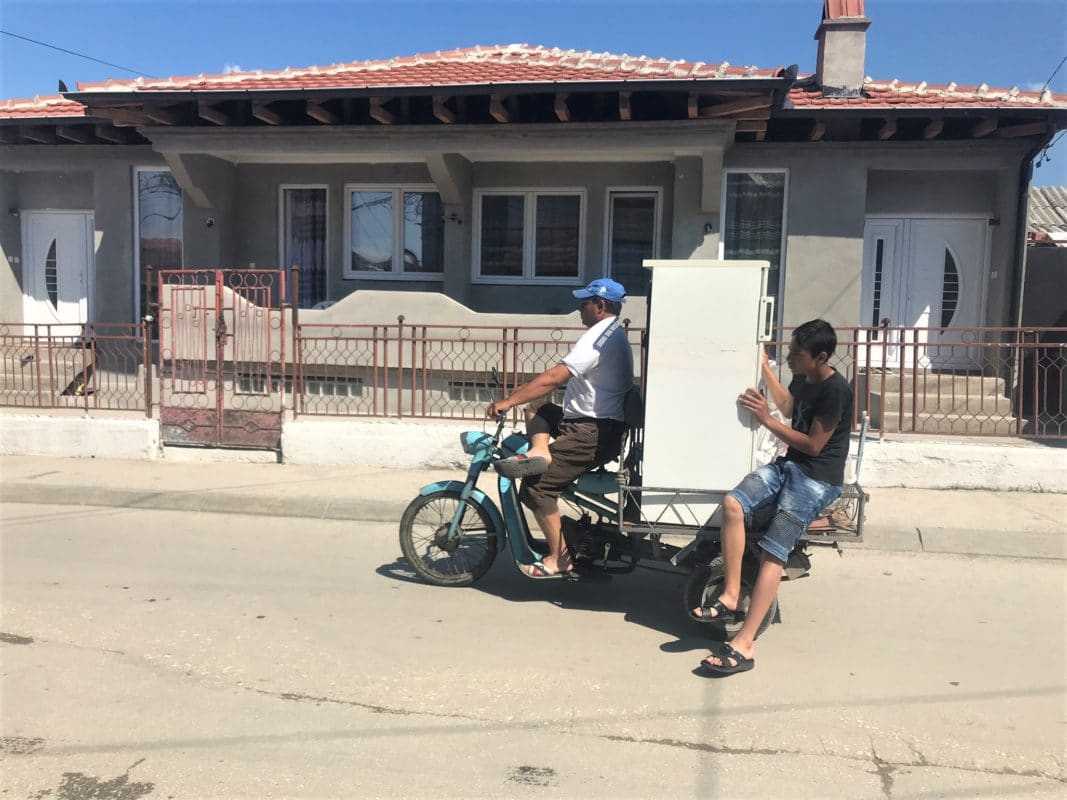 Roma people have been living in Macedonia since the 15th century, but never settled in Sutka until the great earthquake of 1963 when 80% of Skopje was completely destroyed. Monumental plans for the rebuilding of the city were created, and the former pasture was designated to build a new residence for the Roma community itself. Most of the construction was a do it yourself action therefore not all the buildings are registered in the Land Registry. In a lack of documentation, the placement of power and water in many places is not possible, which causes a big headache for the municipality.

In Suto Orizari, all types of houses can be found; from the uncovered cube building to the multi-level luxury villas.  To my question about the size of the houses, Srdjan confirms that they are so big, especially in the area mentioned by the locals as Beverly Hills, because, following the old traditions, several generations live together in a household, including the young married couples and grandparents.

The girls are preparing for their wedding since their childhood and the money is collected for this. The traditional Roma wedding in Suto Orizari lasts for three days, with well-known musicians from neighboring Serbia and Bulgaria for € 15-20,000, while the total cost amounts up to € 50,000. There is no classic bride dance, the tips go to the musicians for making the party unforgettable. The 200-300-person wedding is of great interest to locals, and the municipality plans to give visitors a chance to visit a Roma wedding or be welcomed by a Roma family to get to know their traditions better.

When it comes to traditions, it is important to mention that Suto Orizari is the only place in the world where Roma is the official language. The city also operates its own Roma TV channel, but sadly there is a growing tendency among young people that they wish to be different than Roma. It is mainly a self-identity search for the 14-25 year-olds who define themselves as Macedonian rather than as Roma. In this way, they loose their roots and identities, which in the long term will have unpredictable consequences – adds Srdjan Amet.

Young people and education are the keys to the future, and the local government is doing a lot to ensure that children are not on the street but in schools. Currently, a modern kindergarten ( the previous was burnt down in 2017) is bein built next to the existing technician and primary schools, which will be completed by September 2019 and will accommodate 2,000 children. It was an important recognition in terms of education that school teachers should be aware of the special needs of Roma children, such as the lack of home lesson or homework writing, the lack of time, so that the schools need to be an enjoyable place for kids where they spend time joyfully. 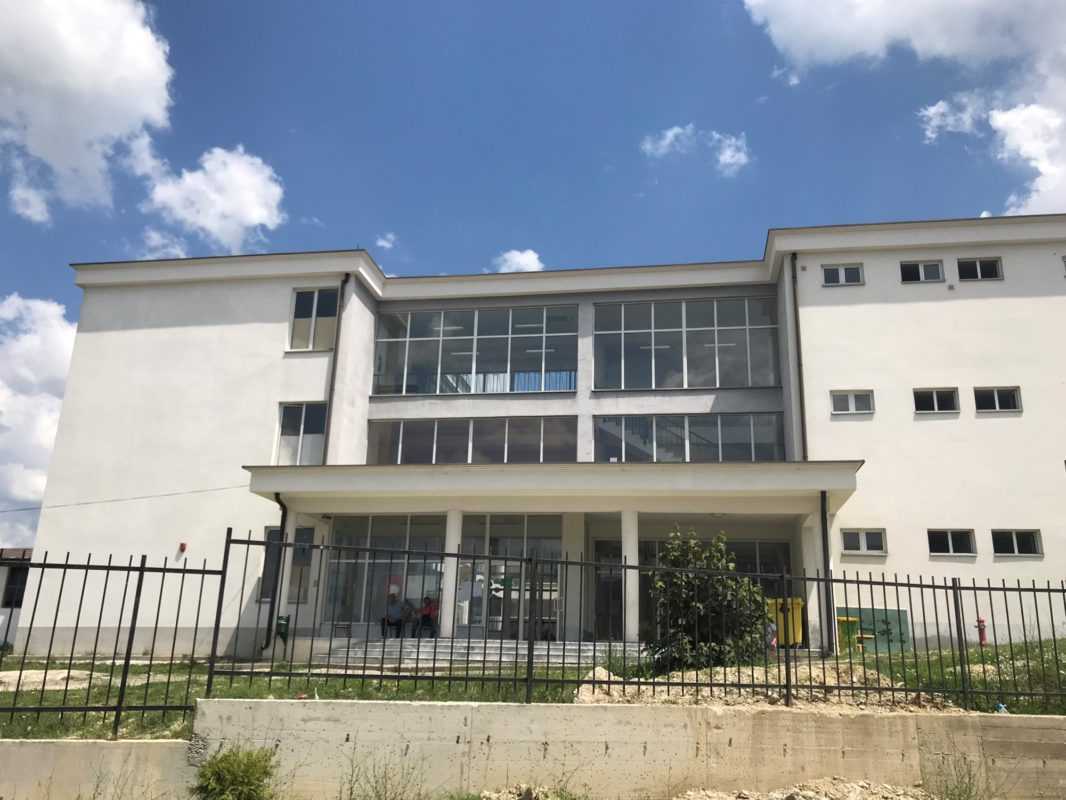 In one of the primary schools, which was built by Japanese support in Suto Orizari, I was fortunate enough to make a visit and I was amazed to see how classy and modern the facilities were. Not to mention that almost everything was written in English, which language is taught at school from the very beginning.

The director is a 27-year-old, ambitious young man who had just passed the awards for the best students together with the teacher’s board. Srdjan Amet emphasizes that money invested in education pays off. Ever since the establishment of the Roma Municipality in 1997, 3,000 graduate youths have been trained through various scholarship programs, including 100 master students, and 20 Ph.D. graduates.

Although discrimination exists in filling jobs, the majority of young graduates work for NGOs and are trying to raise funds for enhancing the standard of living of the Roma community. As there is very little money. The local government receives only €500,000 a year from the central support, and as there are no companies that pay taxes, the local government is not able to manage it without revenue sources. Unemployment in North Macedonia is a burning problem with its 23% share, which is over 50% in Suto Orizari. 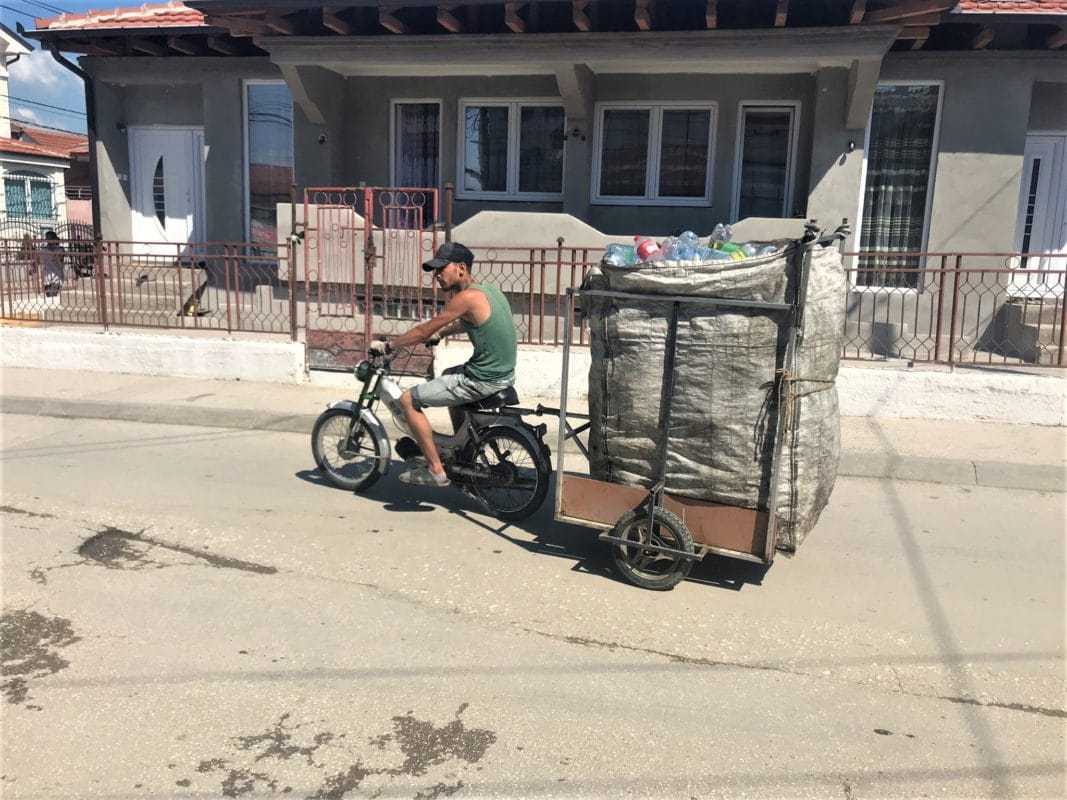 The main livelihood of the people in Suto Orizari comes from the bazaar, where high quality, mostly Turkish clothes can be bought at a fraction of the cost compared to other parts of Skopje. Because of this fact, shopping tourism is significant at the weekends, and many people come here for buying their clothes at cheap prices. At the moment, the bazaar is not well organized, located on both sides of the main street. Considering that the bazaar provides the main source of income for the Roma families living here, the local government would like to make it far more organized in the future creating a designated new marketplace – emphasizes Srdjan Amet. He adds sewerage and garbage disposal are important tasks to be solved in order to create a clean city and a livable environment for residents. 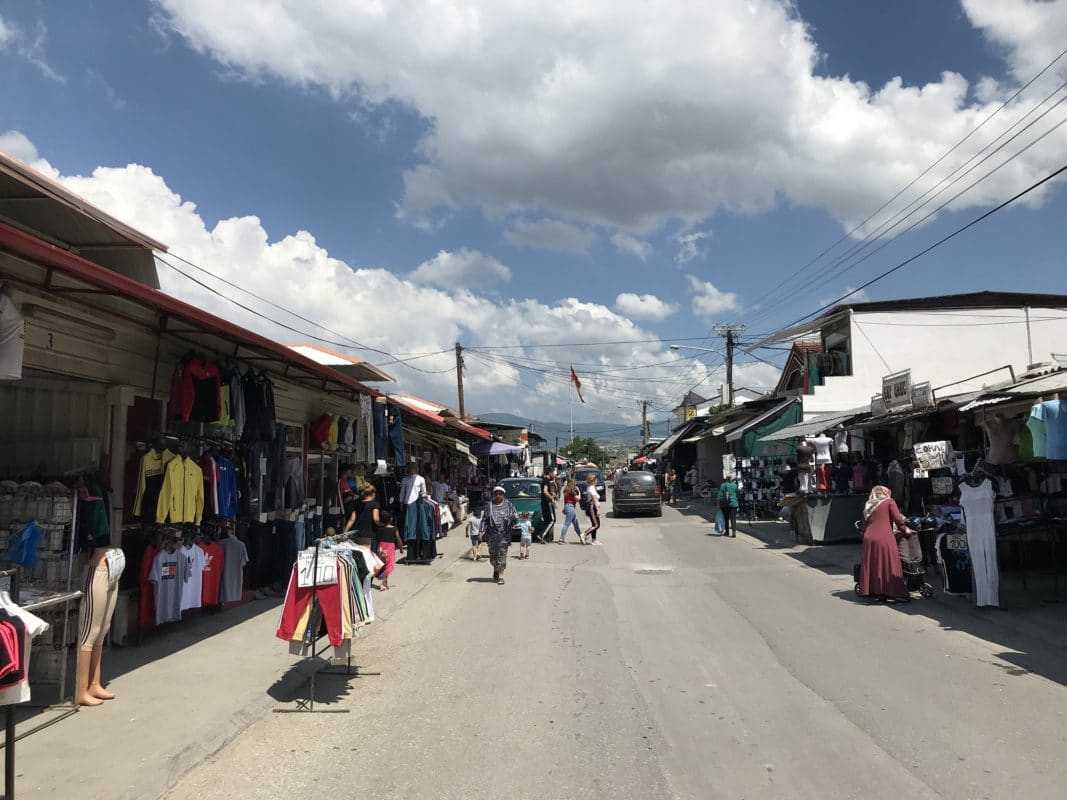 During our walk, we pass by a huge metal hollow mosque. To my question of how much the Roma practice religion, I get the answer that religion doesn’t really play an important role in their lives. They do not pray five times a day and go to the mosque only once a week. However I saw some women on the street in headscarves, but they belong to the 10% of those Muslim believers, for whom religion appears in external acts. In addition to the Muslim, Suto Orizari also has a Jehovah and Protestant church, but they were built for the Albanian and Macedonian people living here.

On the bustling streets, which have been named after others Walt Disney, Indira Gandi, Che Guevara or Garcia Lorca, I occasionally see a horse-drawn carriage and despite the camera, there was a huge smile on his face.  Horses play an important role in the life of the Roma, as they have been associated with their wandering lifestyle, as well as rope and copper workmanship. 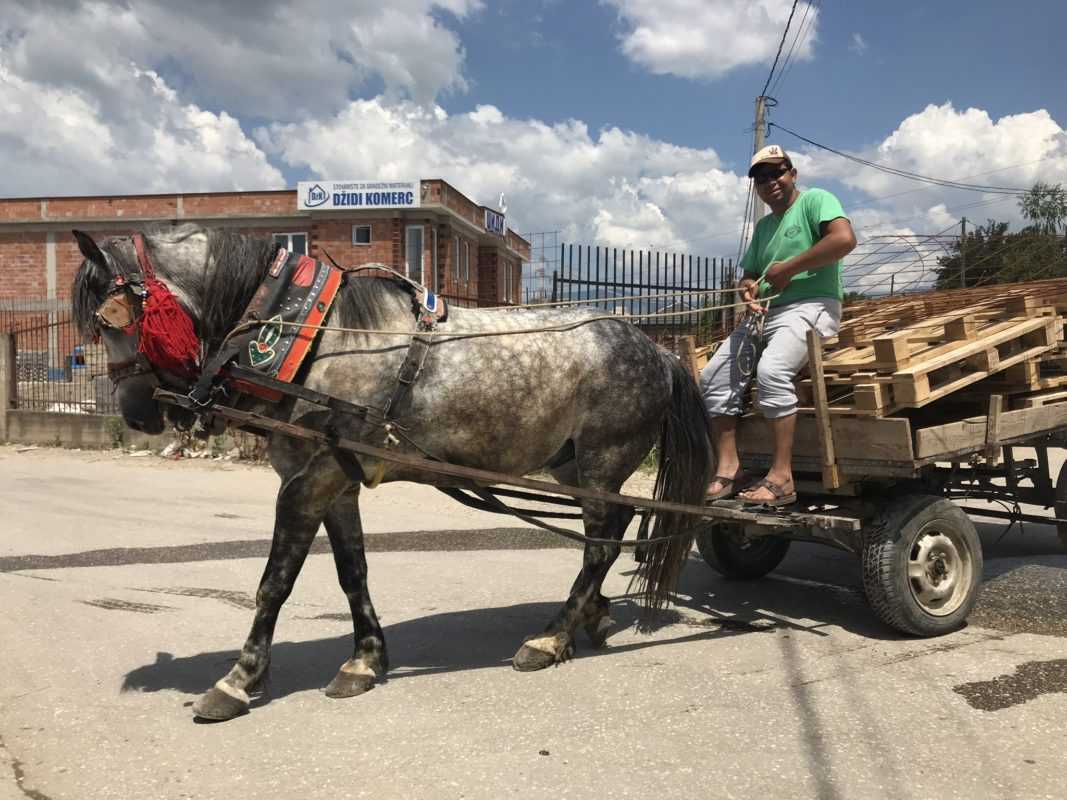 The latter professions in Suto Orizari have been largely extinct, but there are still families who deal with geese and pigeons. A pigeon-breeding man proudly shows their highly respected birds that are competing and ask for up to €150.

My tour ends in the only 8 km long Suto Orizari district. I would like to thank Srdjan Amet, Head of Development for the Roma Municipality, for the kind welcome and hospitality. I’m sure I would not have been able to get to these places without the help of the municipality and saw with my own eyes the life in the Roma capital of the world. Before going back to the airport, we jump in to Suto Orizari’s restaurant called Pinocchio for a quick pizza, where the following thoughts swing in my mind while waiting for the food: “We think sometimes that poverty is only being hungry, naked and homeless. The poverty of being unwanted, unloved and uncared for is the greatest poverty. We must start in our own homes to remedy this kind of poverty.” 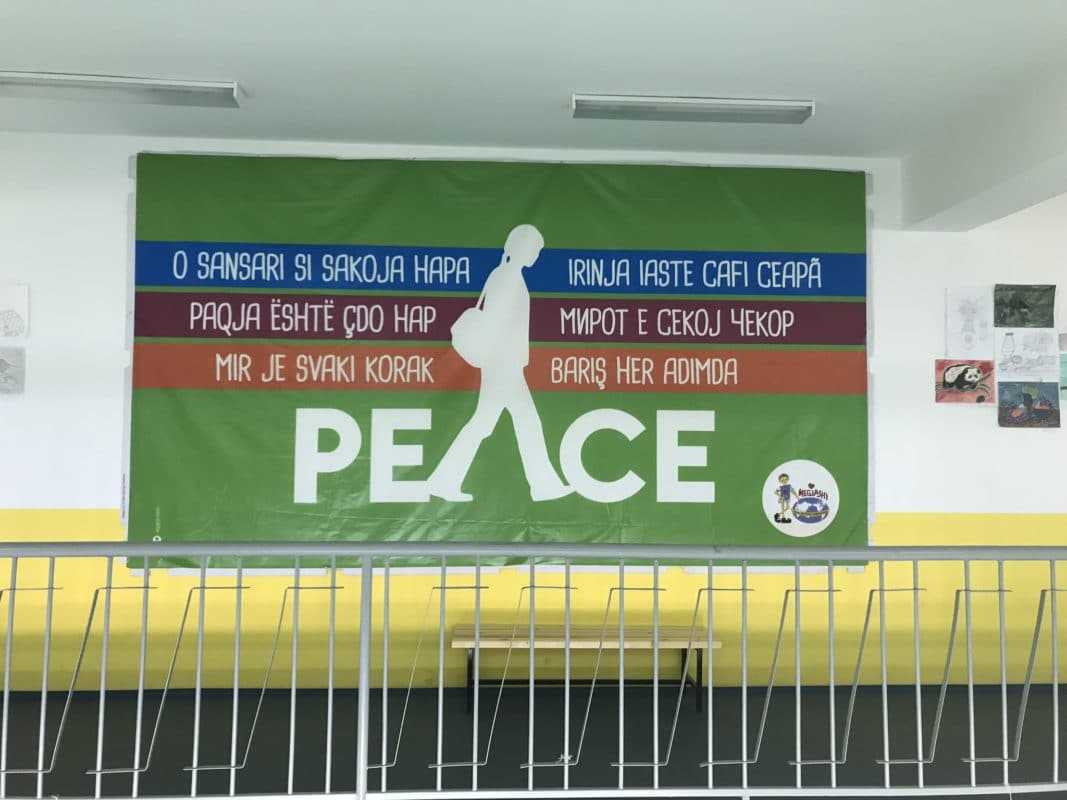