Skopje top sites: where past and present meet

Have you ever booked a plane ticket to a country, but you arrived a different place? Even so, the plane hasn’t changed its route. That’s exactly what happened to me on my last trip, when I headed to the Balkan, to be exact, to Skopje. 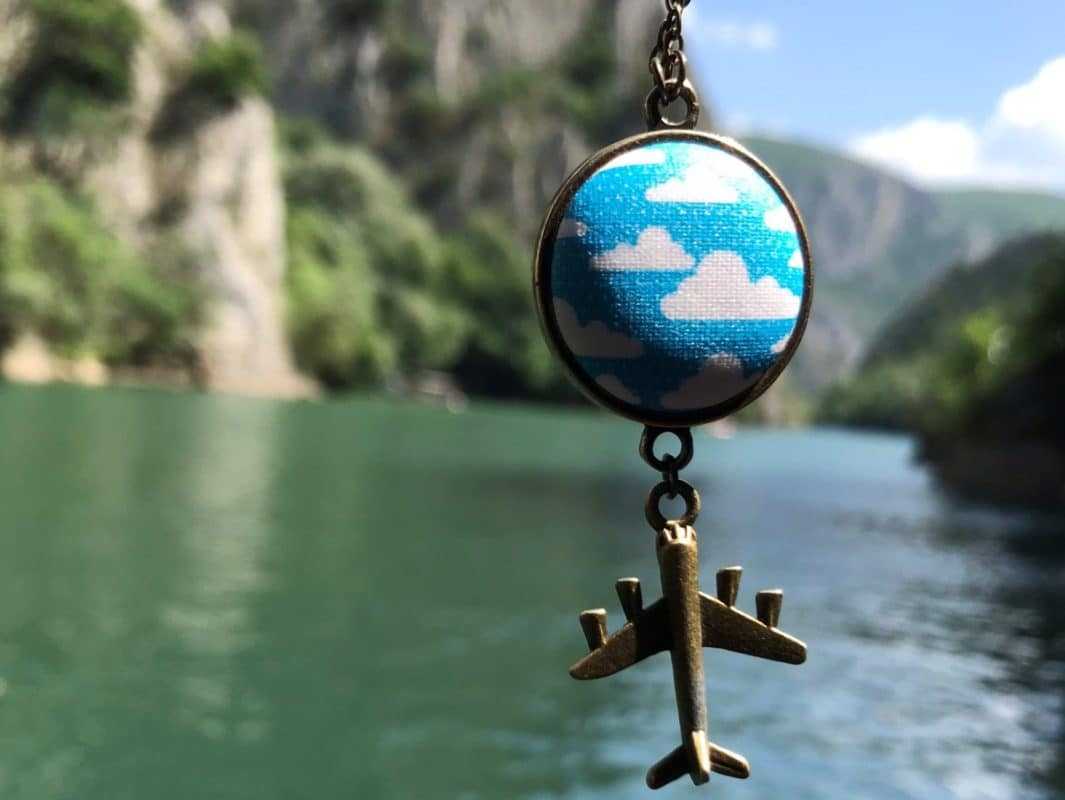 When I bought the plane ticket, the country was called Macedonia, but since February 2019 it has been renamed North-Macedonia. This has come to the end of decades of debate with Greece, which stemmed from the fact that the northern part of Greece is also called Macedonia. Now that the name has changed the disagreement between the two countries seems to be settled. There is an independent country called North-Macedonia, while we have one Macedonia left as part of Greece. So after clarifying this let’s start the journey. Beforehand I had the pleasure of visiting Bosnia and Herzegovina as part of the Balkans (I wrote about this here, here and here), which has set the bar high enough for this trip.

Looking out of the window of the aircraft, I was pleased to note that there will be no shortage of natural beauties here and it was a good idea to rent a car. As the first stop of our trip, we toured North Macedonia’s capital, Skopje, which with its cultural and architectural cavalcade, immediately stole my heart. The two, even if you didn’t think so at first, are organically connected. Behind the astounding, ever-cheesy buildings and public works lies the demonstration of Macedonian unity and cultural identity. 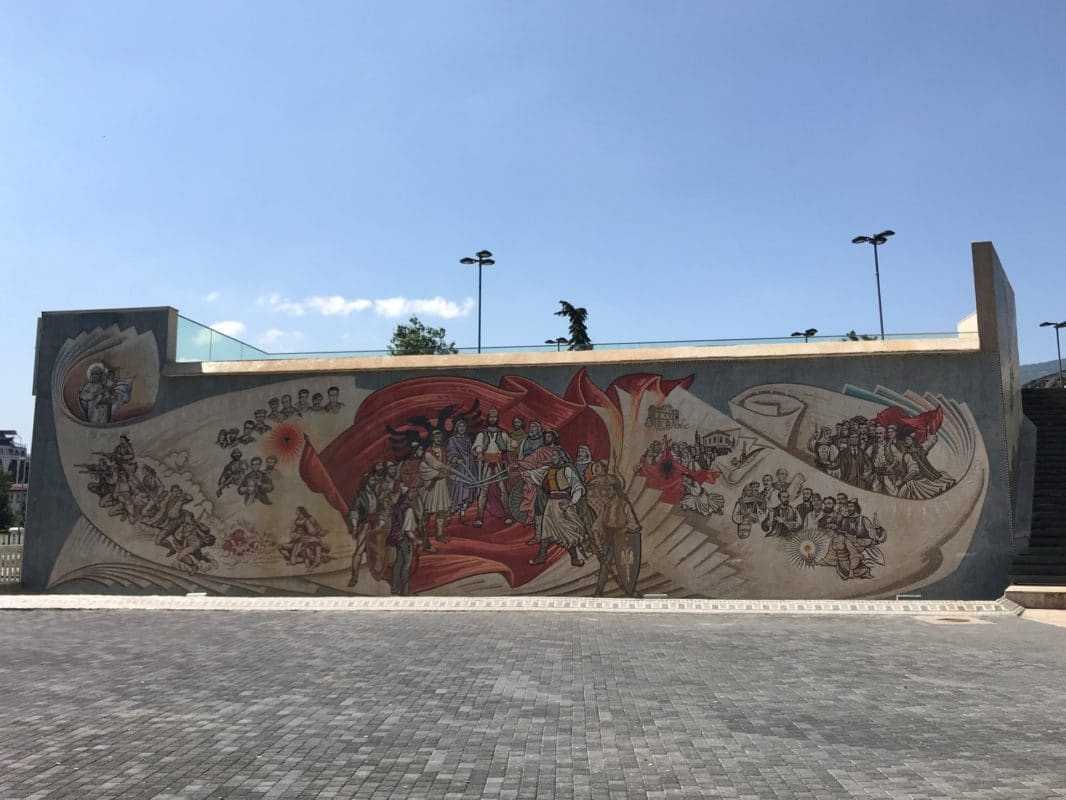 Skopje had been inhabited since 3500 B.C., but its history was so unfortunate that someone always ruled the people who lived here. First the Romans, then the Bulgarians and Byzantines, and finally, in 1392, the Turks arrived, who lived here for almost 500 years. In addition to the religion, there are many traces of long Muslim rule in the city, although the great earthquake of 1963 ruined many historic buildings. Following the 20th-century world wars, the subsequent Balkan wars and the dissolution of Yugoslavia, Macedonia became an independent state in 1991, which became North-Macedonia 4 months ago. 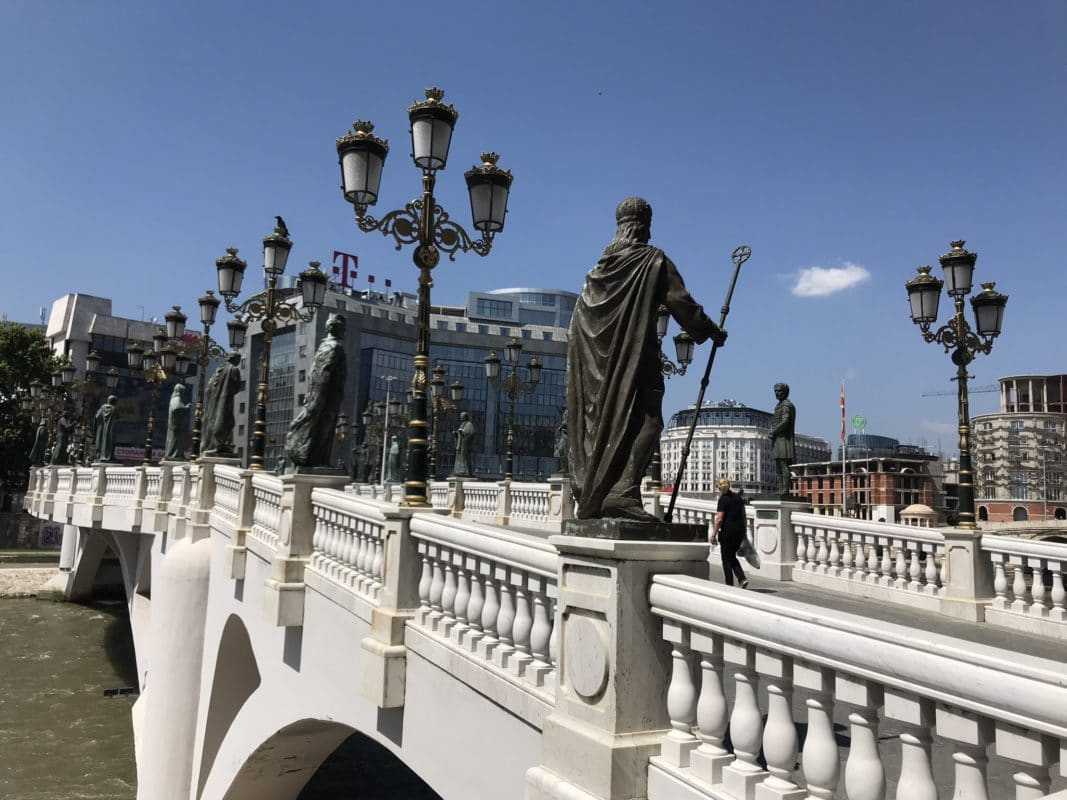 So we are talking about a young country that seeks its identity and roots, which has been suppressed by conquerors for many centuries. Therefore, when a nation-building program was announced in 2010, that sets its flag for a reinterpretation of Macedonian history and its continuum from ancient times. As part of the program, 136 mostly white and huge marble buildings grew out of the ground, accompanied by a number of public statues, all of which are intended to present a Macedonian hero, writer and historical person. On the one hand, they broke pepper under the nose of neighboring Greece, deigning certain historical events and persons, and on the other hand, they gave a boost for tourism.

The four-year construction rush sparked countless domestic political advances and consumed nearly $700 million. But the fact is that as a result, the cheesy riverside cityscape, with its Kale fortress and Turkish bazaar in the background, makes Skopje a truly special experience for visitors and attracts tourists. Here, the saying that there should be something new, something old and something blue are fulfilled. The latter in this case means blue skies and Mediterranean climates almost without clouds. In addition to modern buildings, there are many beautiful sites in Skopje, of which the following were my personal favorites. 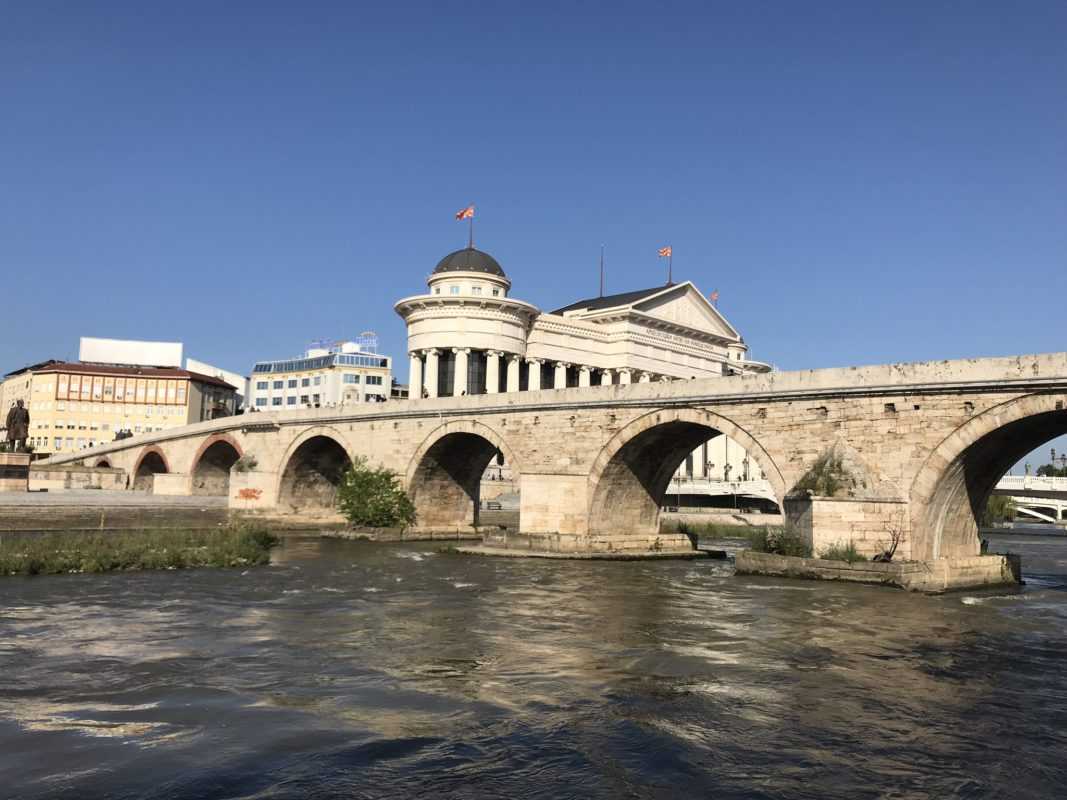 Located at the highest point of the city, on Samoilova hill, the fortress dates to a long time. Originally it was built in 6th century B.C. and is no longer visible in its original form due to the numerous earthquakes. Unfortunately, it was not rebuilt after the last demolition in 1963, so some parts of it are not even open to the public due to the risk of collapse.

In 2006, archaeological excavations began on the castle grounds, during which Neolithic settlement remains, including a wooden windmill and clay pots decorated with plant motifs, were found from 3,000 B.C. Since the artifacts and the former house remains were well below the fortress level, it is supposed there was once a Greek settlement, called Skupi under the fortress, which was literally later built as the defensive was above the village.

There is no exhibition site or museum within the castle but walking on the walls with huge Macedonian flags offers stunning views of the Vardar River, which splits the city into two parts.

For me, it is always particularly interesting to look at the market of a foreign country, especially when it comes to a bazaar. The oldest and largest market in the Balkans, Čaršija, is located in the heart of Skopje and has played an important role in trade in the region since the 12th century. 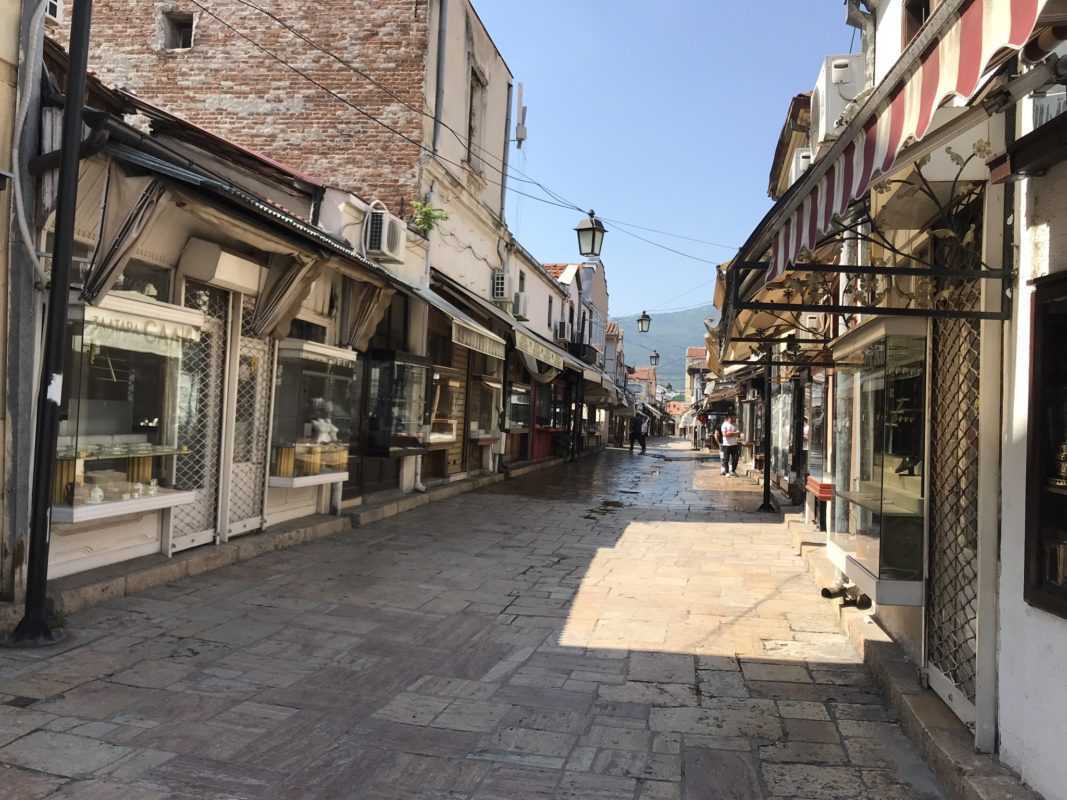 Walking on the cobbled streets, I felt like I was in Turkey, with the difference that no one here wanted to drag me into business or start heated bargaining to buy something. There was no shortage of nice goods: from slippers to jewelry and antiques, there was everything on the alley streets.

All this combined with modern art, like an umbrella street, which is eerily similar to the one, located in Hungary, Szentendre. It seems that Hungary is not the only country where artists are inspired by the umbrella, no matter how much of the 365 days of the year it rains. Visiting the bazaar to taste kebabs and chevapchichi is a must-see program, as well as to sit in a bar in the evening and smoke mango sisha (water pipe) next to lemonade or have a Turkish coffee.

Going through the streets of Čaršija Bazaar, you don’t have to search long to find a mosque, given that about 35% of the Macedonian population is Muslim. However, if you want to see something really nice, then the mosque named after Mustafa Pasha is worth visiting.

The building was built on the high ground of the city in 1492 and although it was damaged by the earthquake of 1963, with Turkish help it can be seen again in its original beauty. In addition to worshippers, admission to the mosque is free for tourists in proper clothes and barefoot. Though I know that full-body clothing is standard for women, I wasn’t told to wrap my arm too, so forgive me.

The interior of the mosque, which reflects Constantinople architecture is impressive: the blue-red plant sedans (Arabesques) amazingly braid around the windows and the 47-meter-high dome is really amazing. If we’re done with all this, let’s continue the contemplation in the courtyard of the mosque, where, in addition to a fountain and scented rose garden, there is also the turbe of Mustafa pasha’s daughter. 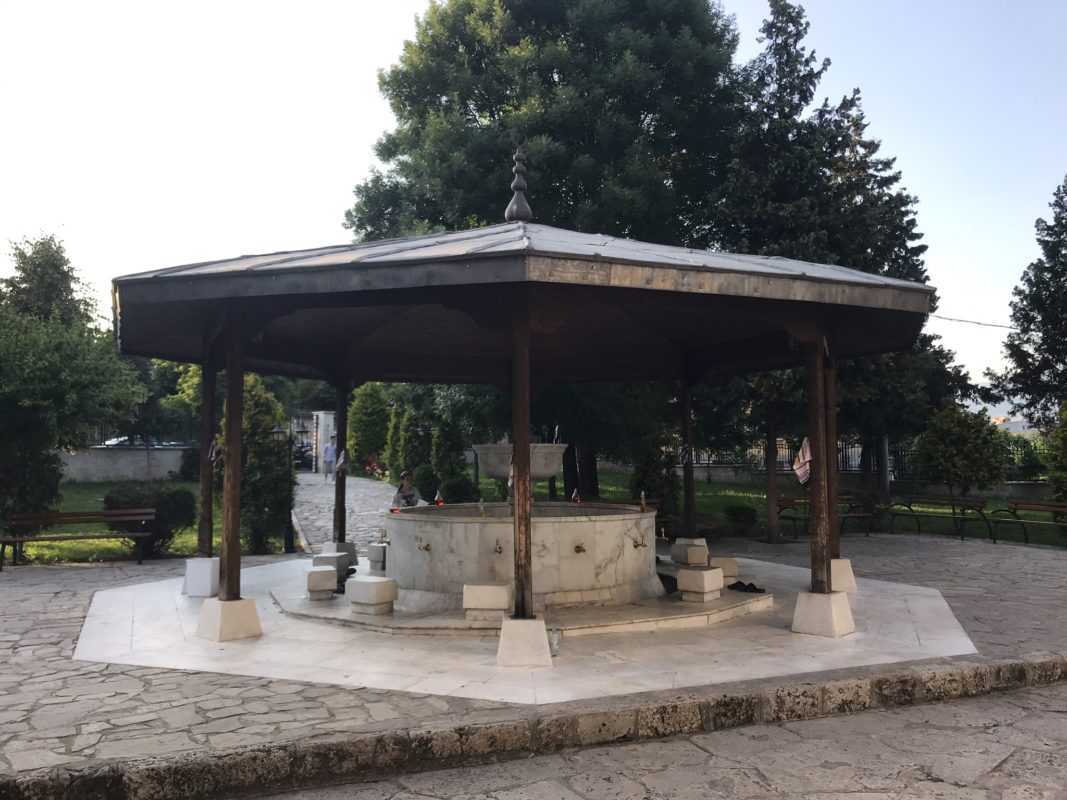 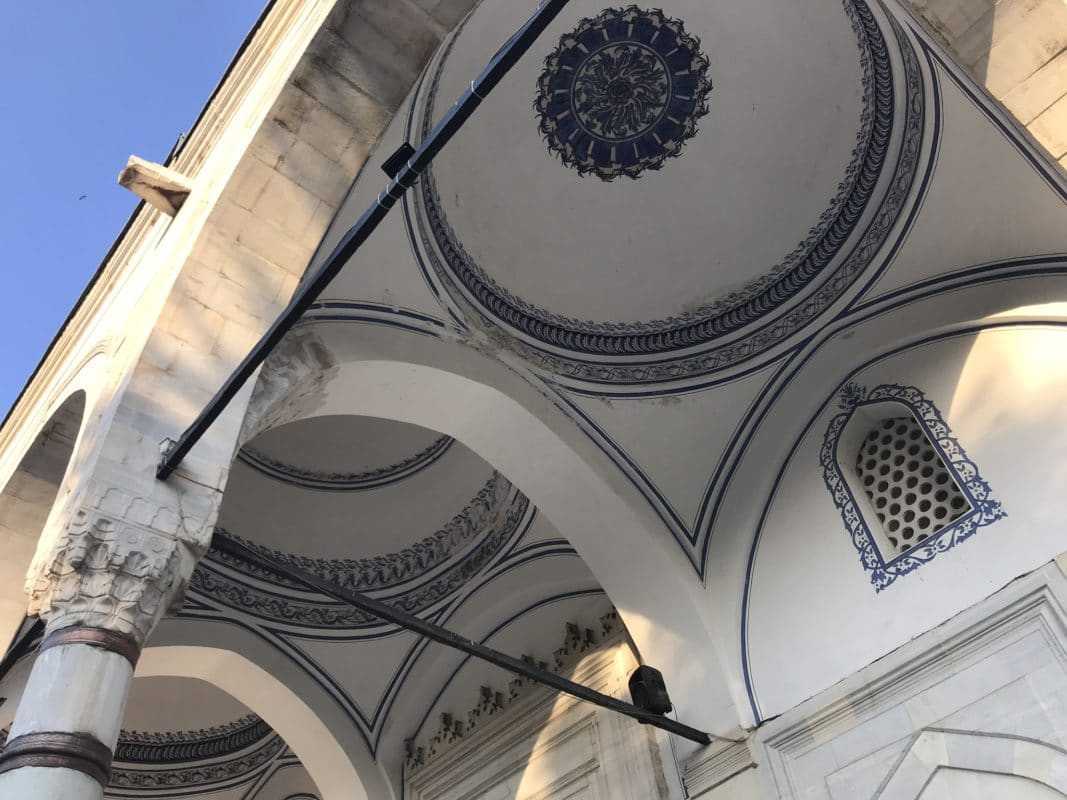 The aqueduct belongs to Vizbegovo territorially, but Skopje is usually used as a reference point for this wonderful place. It is considered not only one of the most beautiful aqueducts in North-Macedonia, but also in the territory of the former Yugoslavia, alongside the Diocletianus aqueduct in Split and Bar aqueduct in Montenegro. 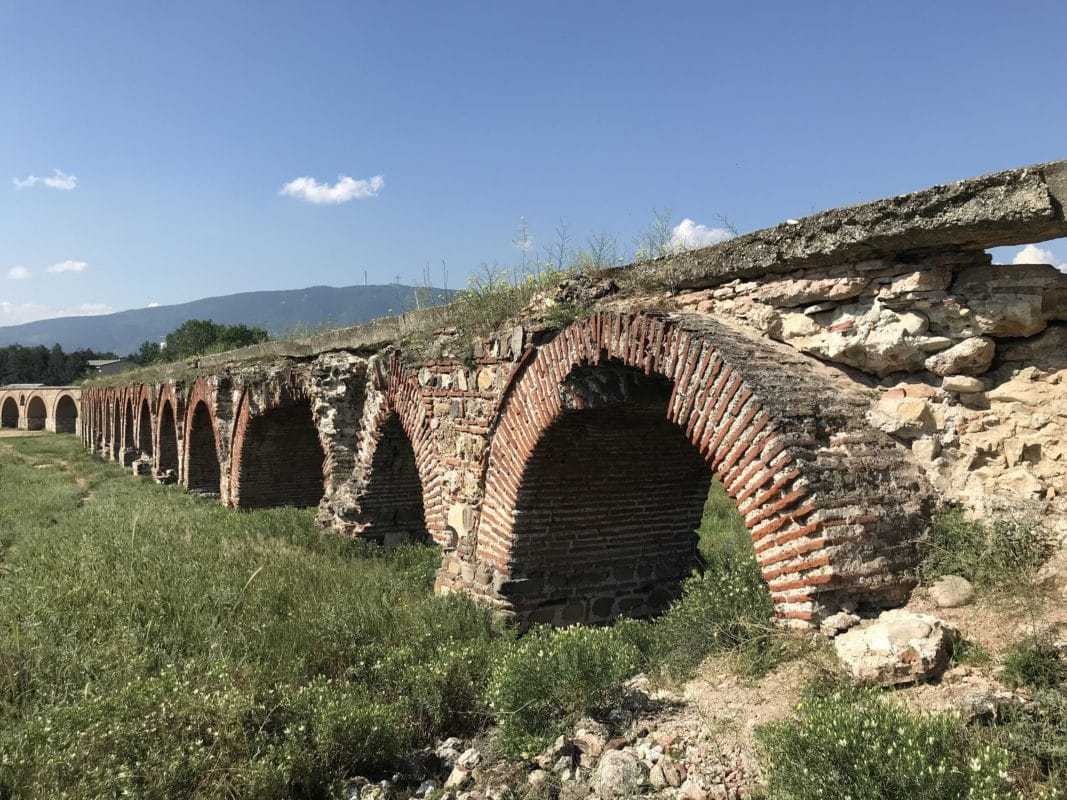 Three theories have been created as to its origin. According to the first, it was built in the Roman era in the 1st century and supplied drinking water to those living in the municipality of Skupi. According to the second, during the Byzantine period, it provided water during The Justiniana Prima (5 century A.D). According to the third, it was built in Ottoman time in the 16th century and served the Turkish baths, the Hammams. Whichever of the above is true, the aqueduct is only 386 meters long and counts 55 arcs. It was still in use until the 18th century, providing an unparalleled view in the middle of the plain. Some fig trees can be found next to the complex, just in case you are hungry, you can eat some. 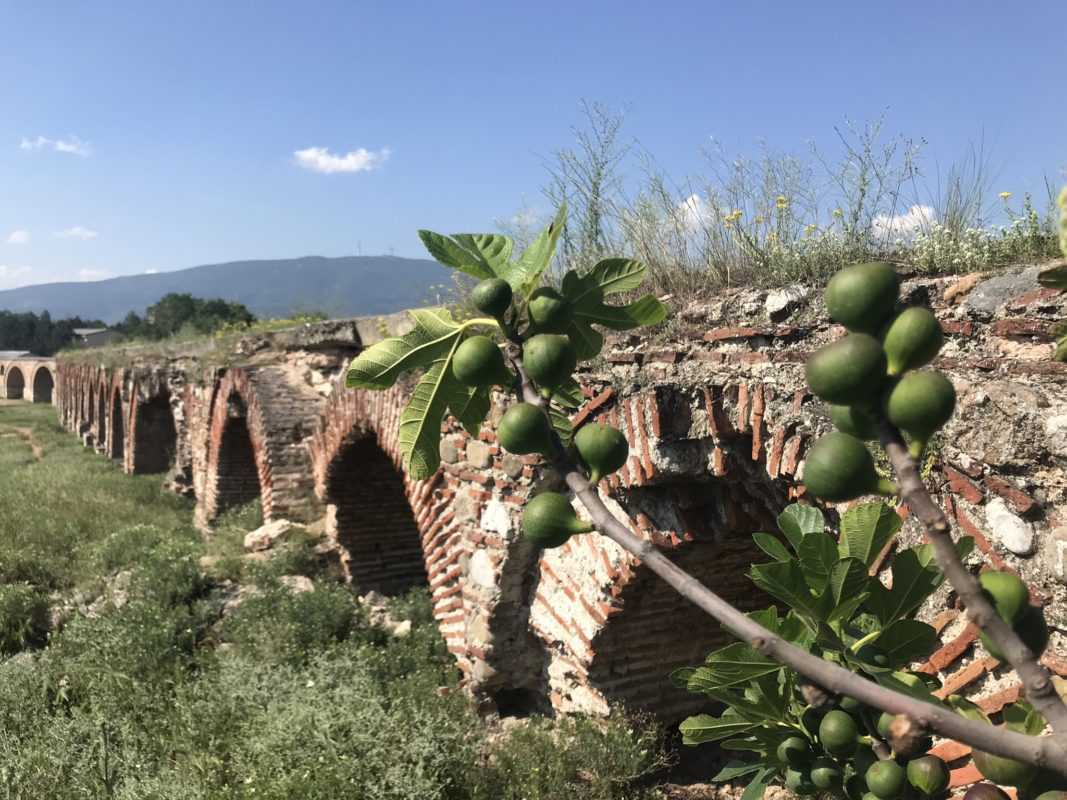 Hearing Skopje, perhaps most people think of Mother Teresa, who, with her volunteer work for the world’s poor, is considered to be one of the most significant figures of the 20th century. Not coincidentally she received numerous medals in addition to the Nobel Peace Prize and was inaugurated as a saint in 2016.

When she was born, North Macedonia was part of the Ottoman Empire, so let us not be surprised if we see Üsküb instead of Skopje, which is the Turkish name for the city. Her parents’ house is no longer standing, only a sign shows her former place, but a memorial house was built in her honor, in which, in addition to shrines, countless photos and exhibits show her holy way of life.

Mother Teresa has a great cult in Skopje. Not only in the form of souvenirs, but also in the form of copper tablets in almost every part of the city centre. I have seen 22 pieces by number. Every tablet depicts Mother Teresa, accompanied by a quote from her in Macedonian and English languages. For me, the most beautiful quote was the hymn of life, which I deeply agree with every line of, especially the last one. 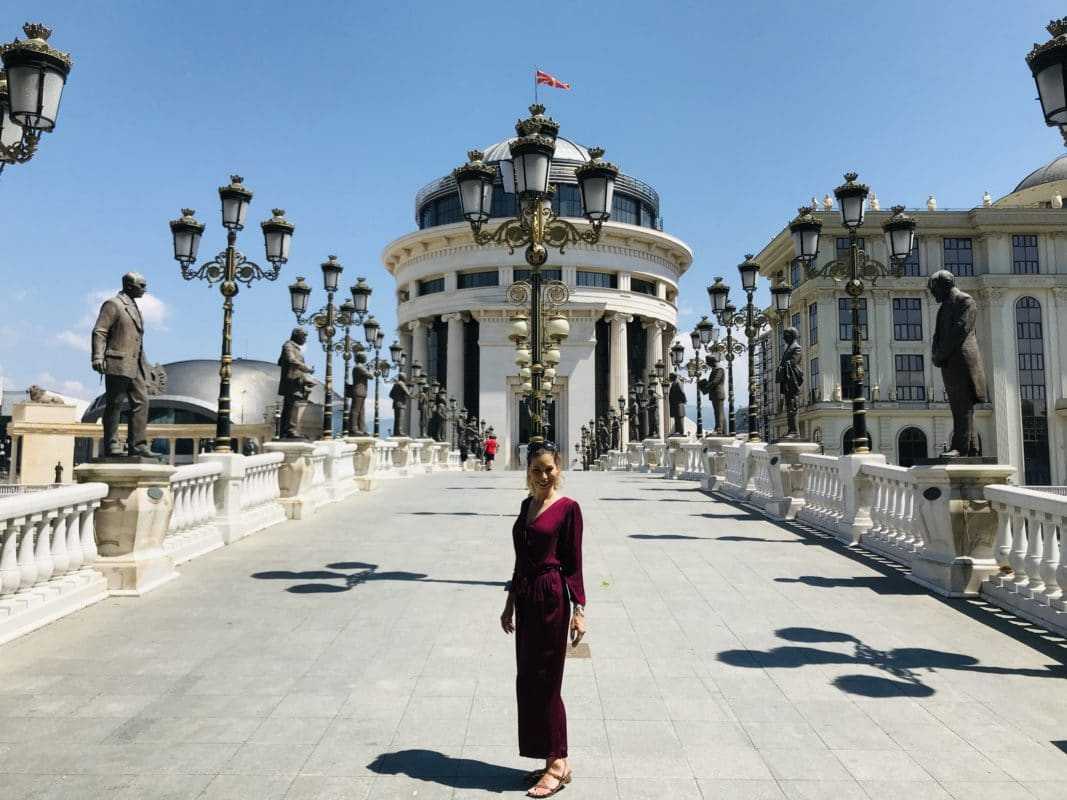 In my next blog post, I will take you to the special district of Skopje, Suto Orizari. Where not only tourists almost never go, but the rest of the city rarely set foot. Keeping up with me.