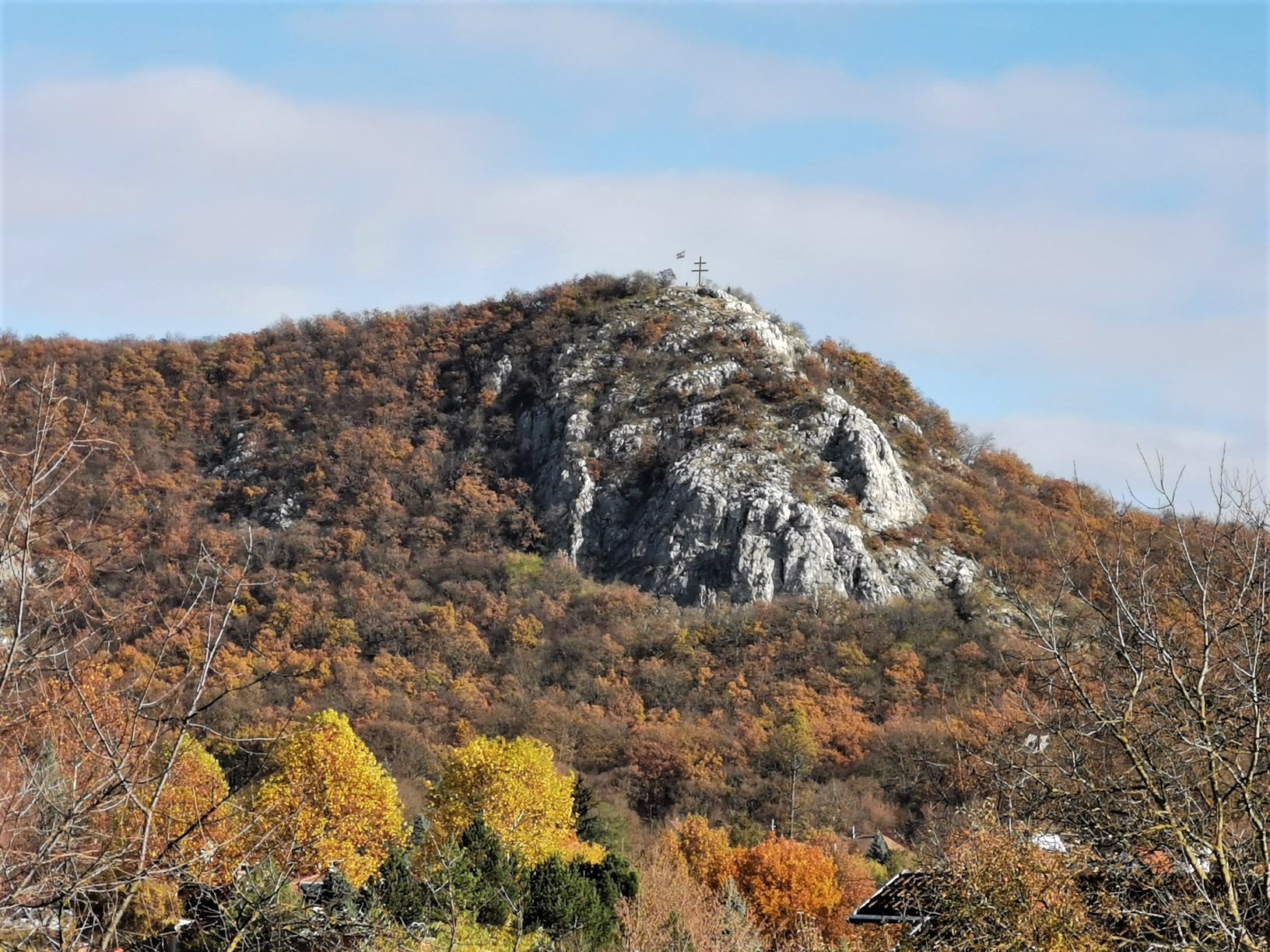 Pilis and the surrounding hills of Budapest offer many special hiking places, the most famous of which, Dobogókő, I wrote here before. Now I have found a lesser-known place, called Csobánka. Its huge 40-meter white cliffs attract all the visitor’s eyes from afar. Although conquering them seems almost an impossible challenge at first glance, but it’s an easy hike even with children. The road leads up through are easy-to-walk trails, where both the experience and panoramic views are guaranteed. 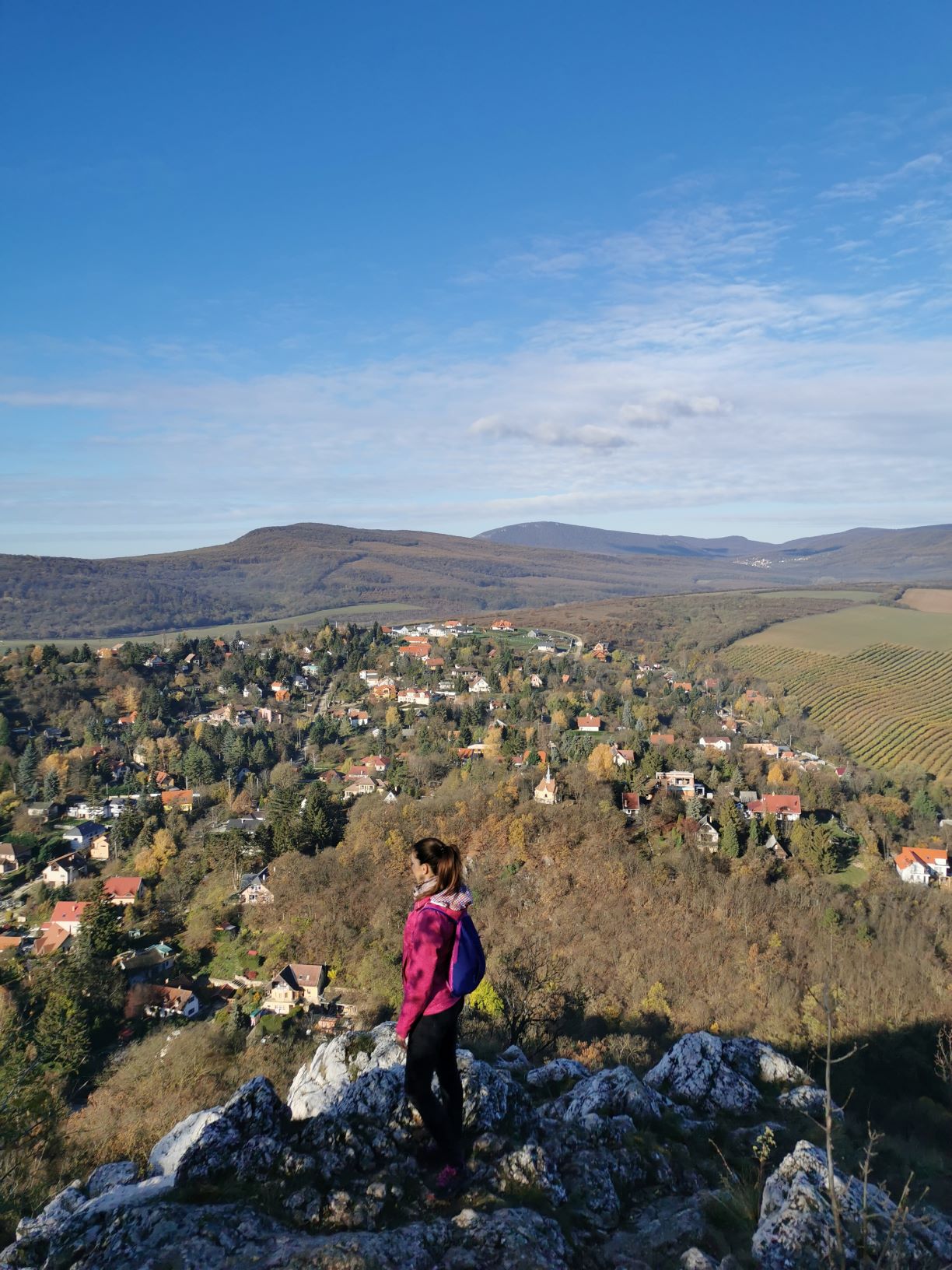 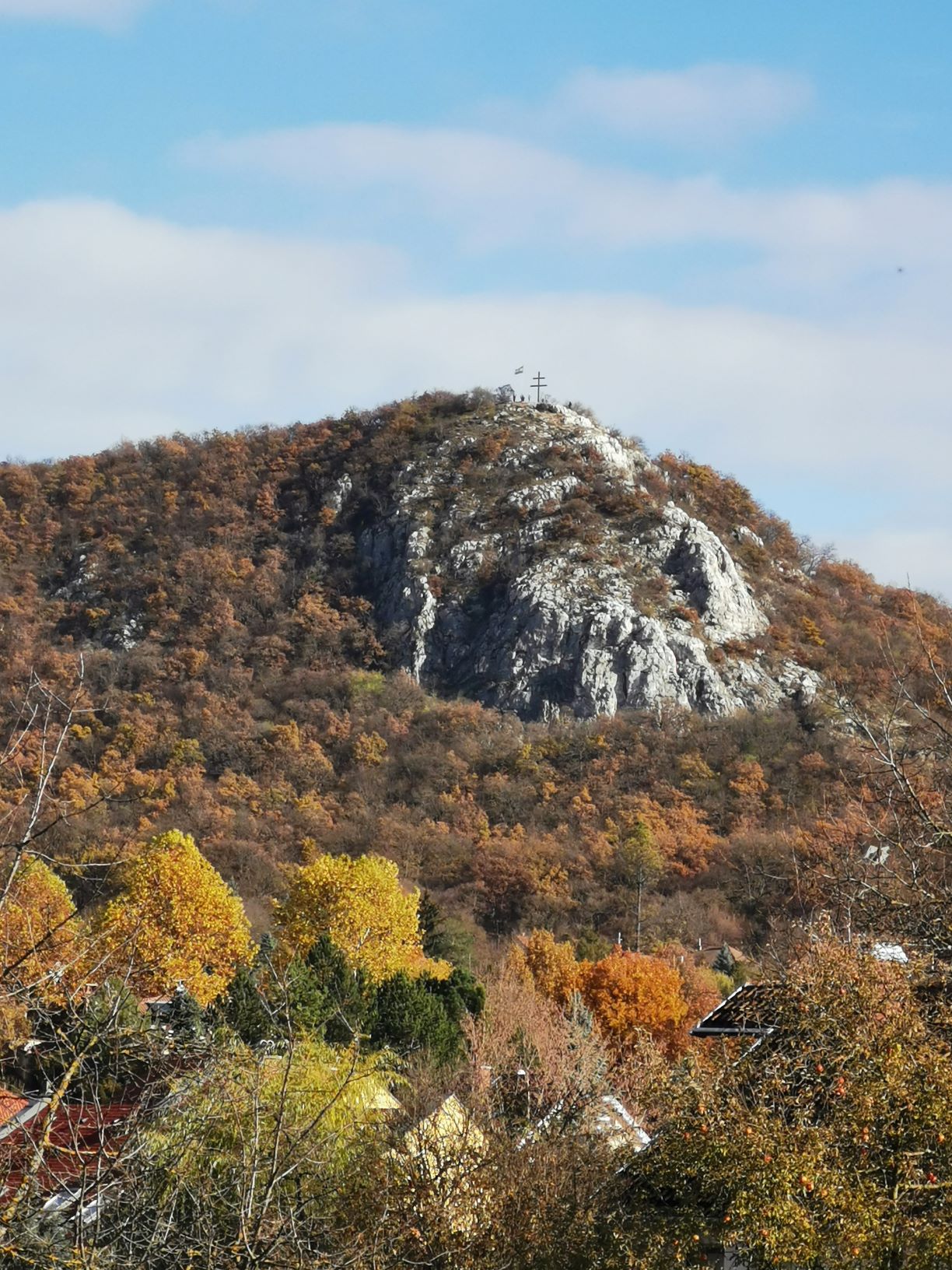 Origin of the rock and place

According to an old legend, the Csobánka Basin was created so that when God created the world, he got tired and rested on his side. His elbows traced the Valley of Dera Creek, while the rocks surrounded the creator’s body.  In fact, what we see in Csobánka is a sedimented limestone rock that was created 200 million years ago. There was once a sea here, with countless marine creatures, including snails and shells and other lime-coated ones. 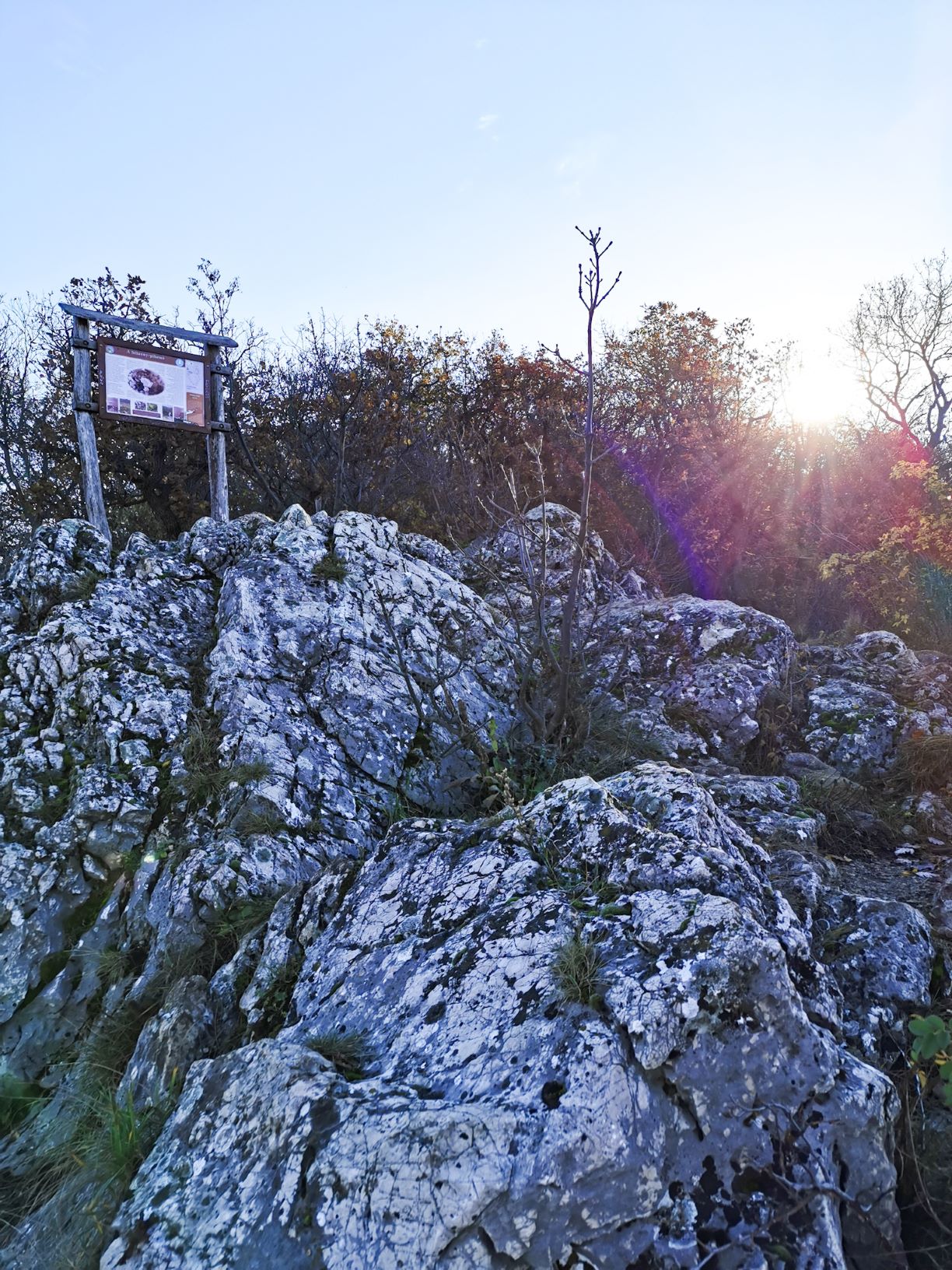 As these creatures died and their vases were destroyed, so did the thickness of the marine sediment grow. The sediment, up to 1,000 meters thick, was crystallized due to pressure over the million years. Due to the tectonic movements, the ancient sea closed, thus the sedimentary rocks were blocked and formed. Although the rock has worn off strongly, if you are attentive enough, you can still discover shell prints on them. 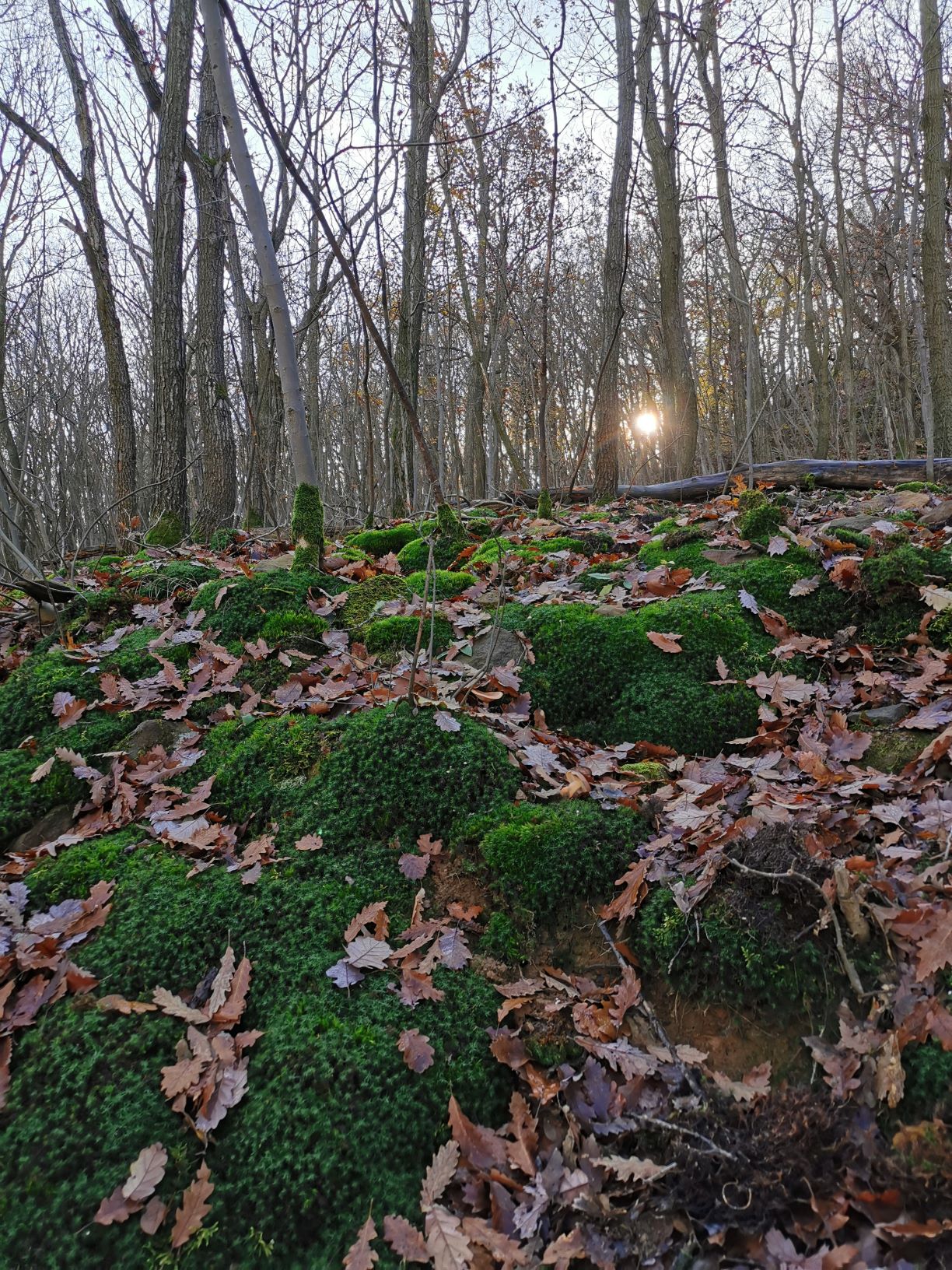 The starting point is the Oszoly pihenő (a resting place), from where extremely well-signposted routes lead through and through the village. This was a particularly positive surprise, I must admit. I did not expect to see such informative information on the spot. So it’s another red dot to Csobánka, as well as the fact that it’s less well known, so there’s no need to expect a huge crowd here. There are five hiking trails here like erdőszéli, Fehér sziklák, Oszoly, Mackó Cave és Szent-kút trails. I have chosen the 4.6 km long Oszoly trail, which is easy to walk around with children too, making it an ideal weekend program for the whole family. 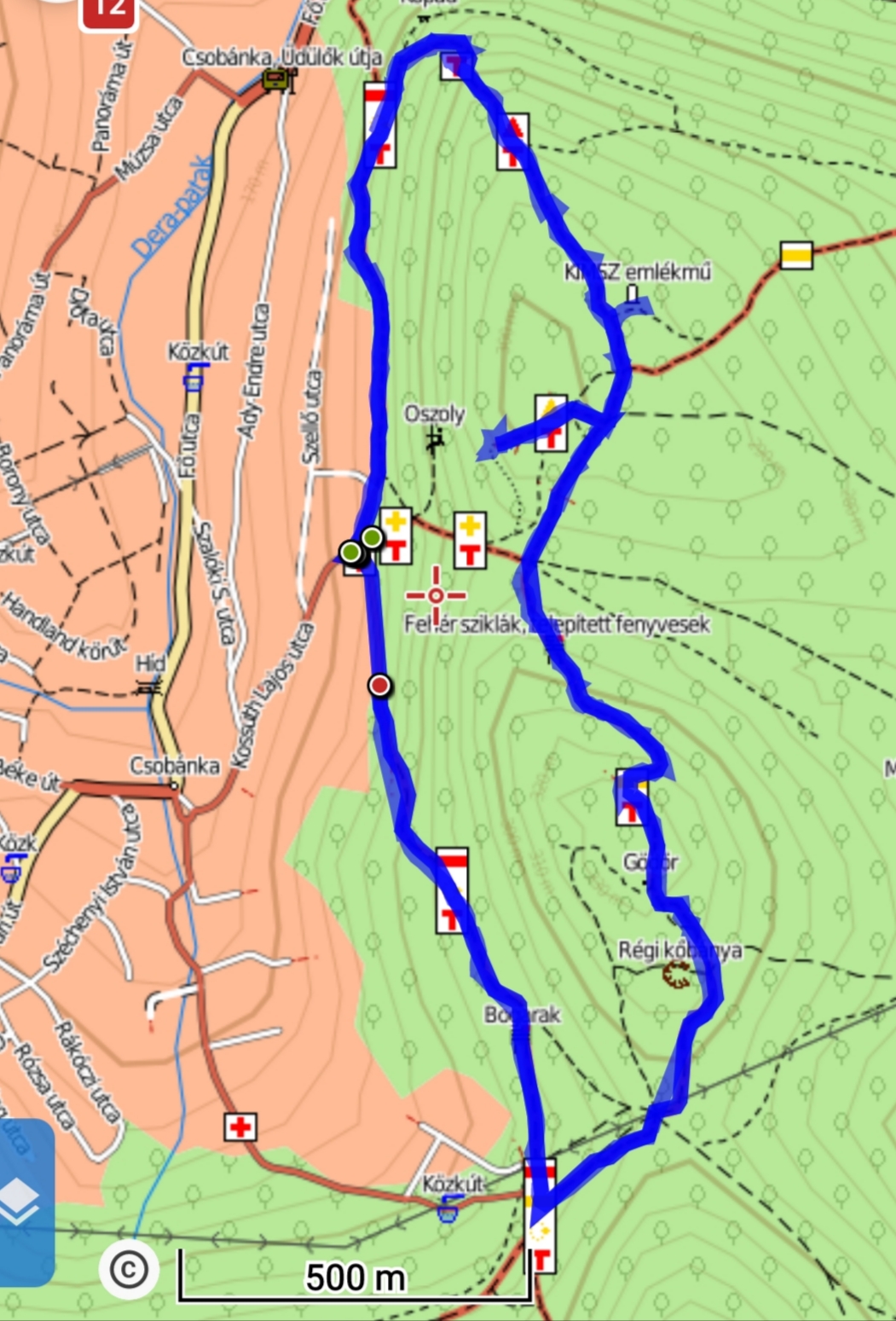 Leaving the rest stop, you begin your journey on the red horizontal line sign, where you will soon be able to get an insight into the fauna of the Oszoly forest through information boards. The oak-hornbeam forest hides small songbirds, such as hawfinches, forest finch, common hawfinch and redstart, and if you are lucky you can hear them singing during the tour. 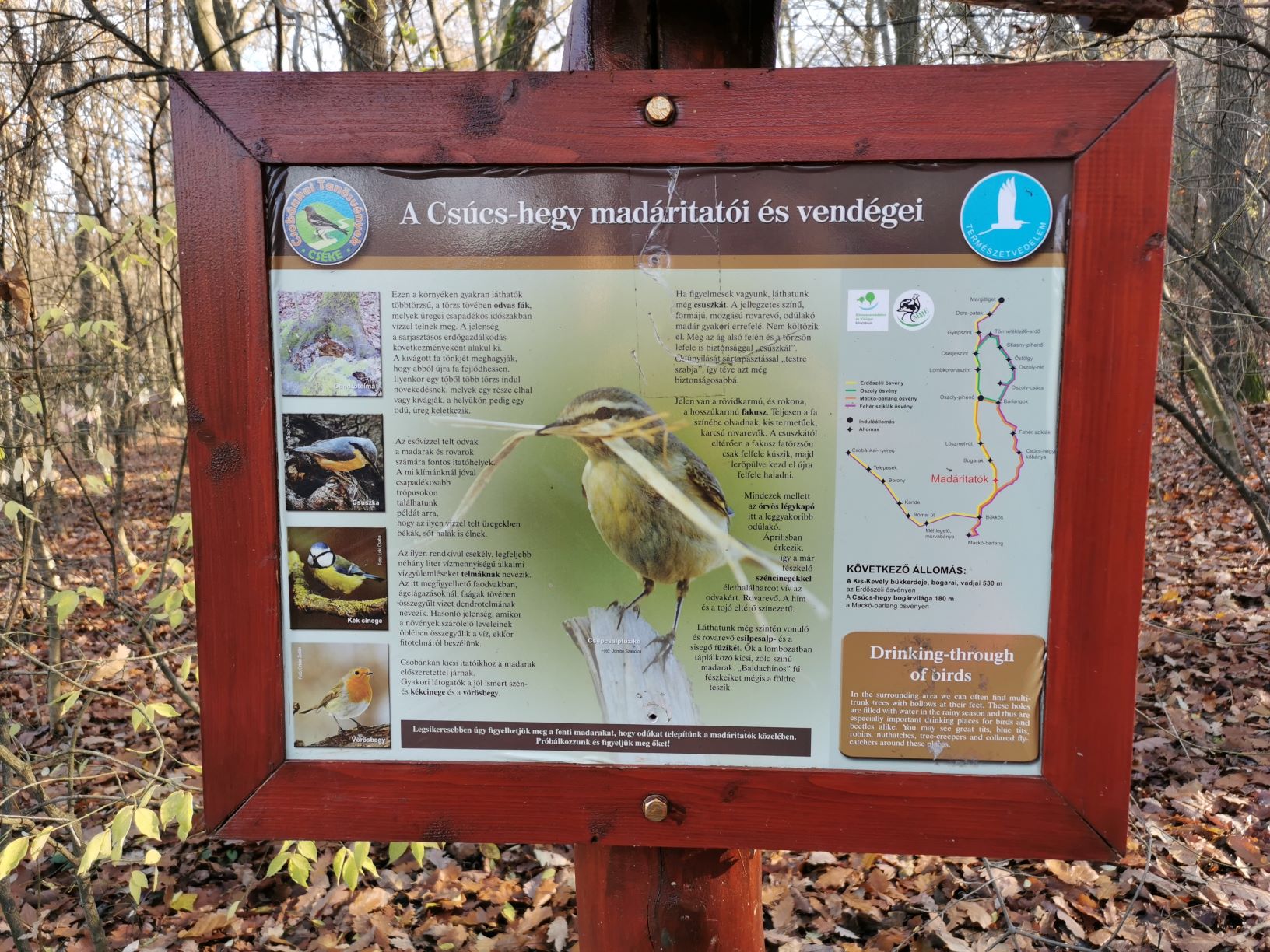 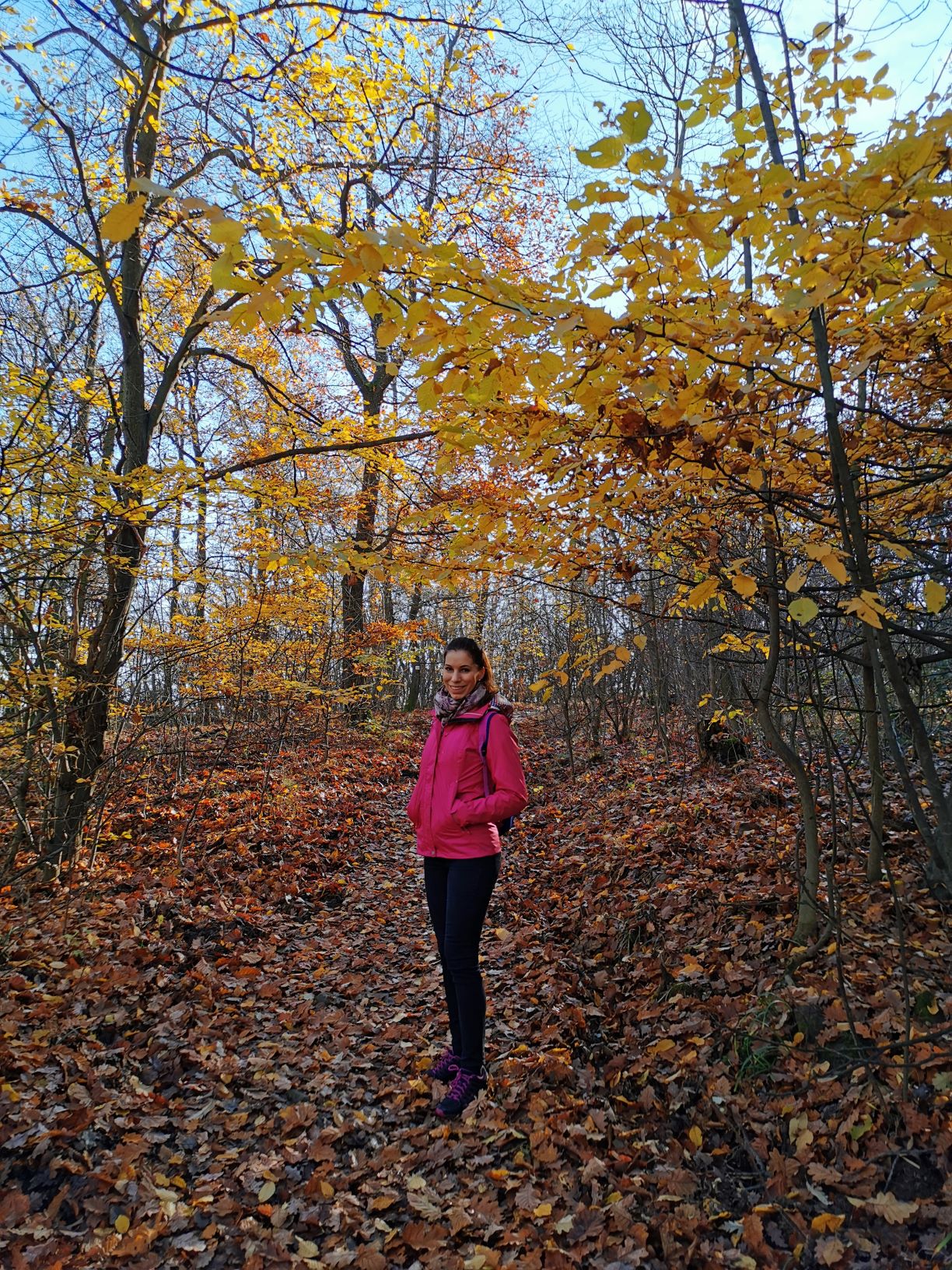 The initial, relatively flat terrain will soon head upwards and take you through a debris slope. The short route was named after the fact that the rainwater flowing downhill practically washed out the ground and made the limestone rock visible. The slope is a challenge not only for hikers but also for the plants that live here. Due to the specific conditions, plants here have a lower chance of settlement. In addition to Polypodies that can be seen almost every time of the year, in early spring the debris slope is bleached by a lot of small flowers. 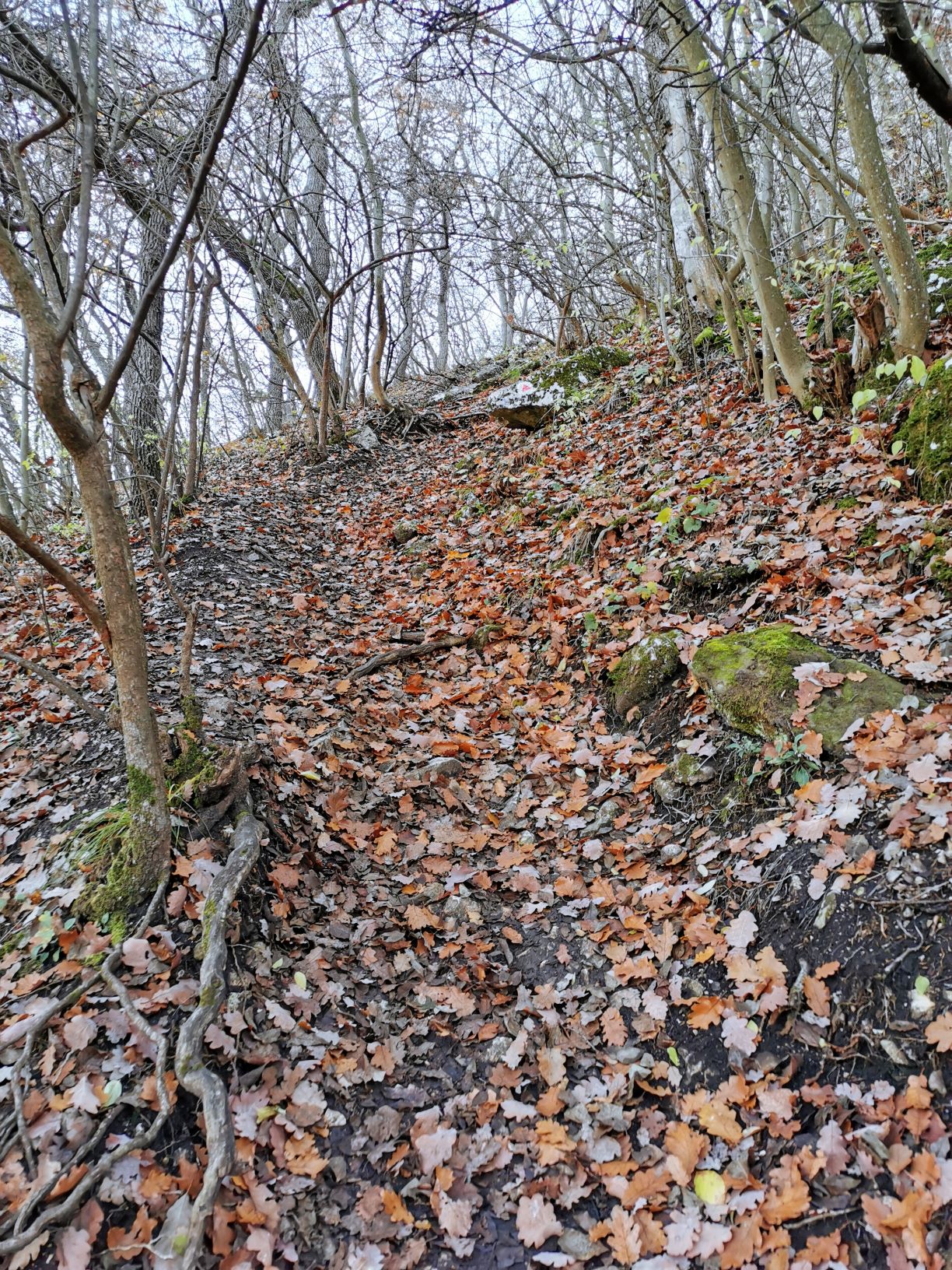 Immediately after the climb, the tour arrives at the first lookout point, which means the Oszoly Head (Oszoly-orr). Oszoly is believed to be derived from the Serbian word osoje, meaning “shadowy place”. The place remained true to its name. The north-south ridge of the rock is so sharp that it casts a shadow over the valley in the mornings, but this did not detract anything from the value of the sight. 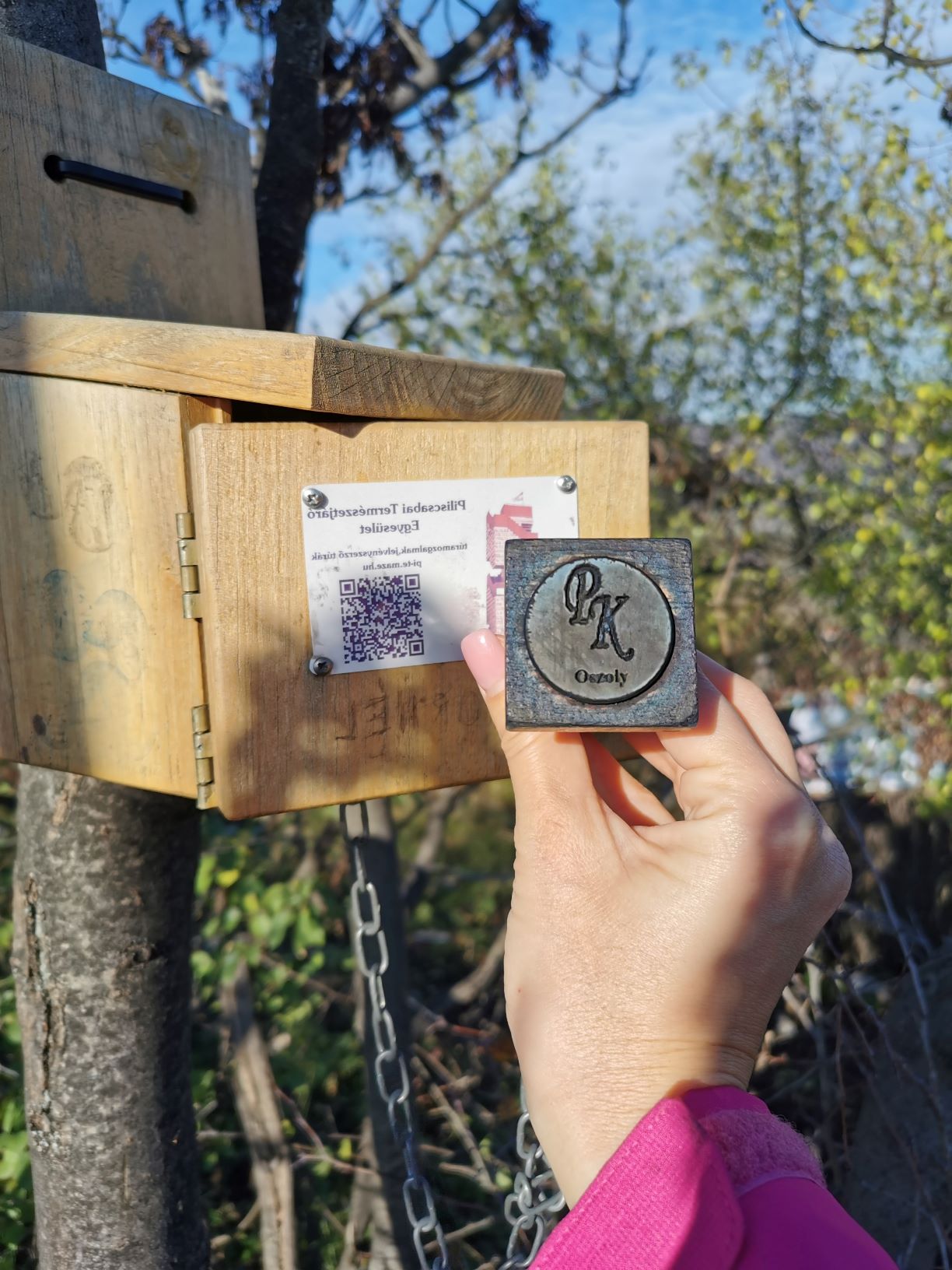 Jenő Stiasny’s plaque used to stand at the Oszoly Head, who, as a silver badge honor of the Hungarian Tourist Association, brought to life a number of initiatives, such as the construction of the rest house in Csikóváralja. From Oszoly Head you can see the silhouettes of Pilis and Visegrad Mountains next to the Csobánkai Basin. 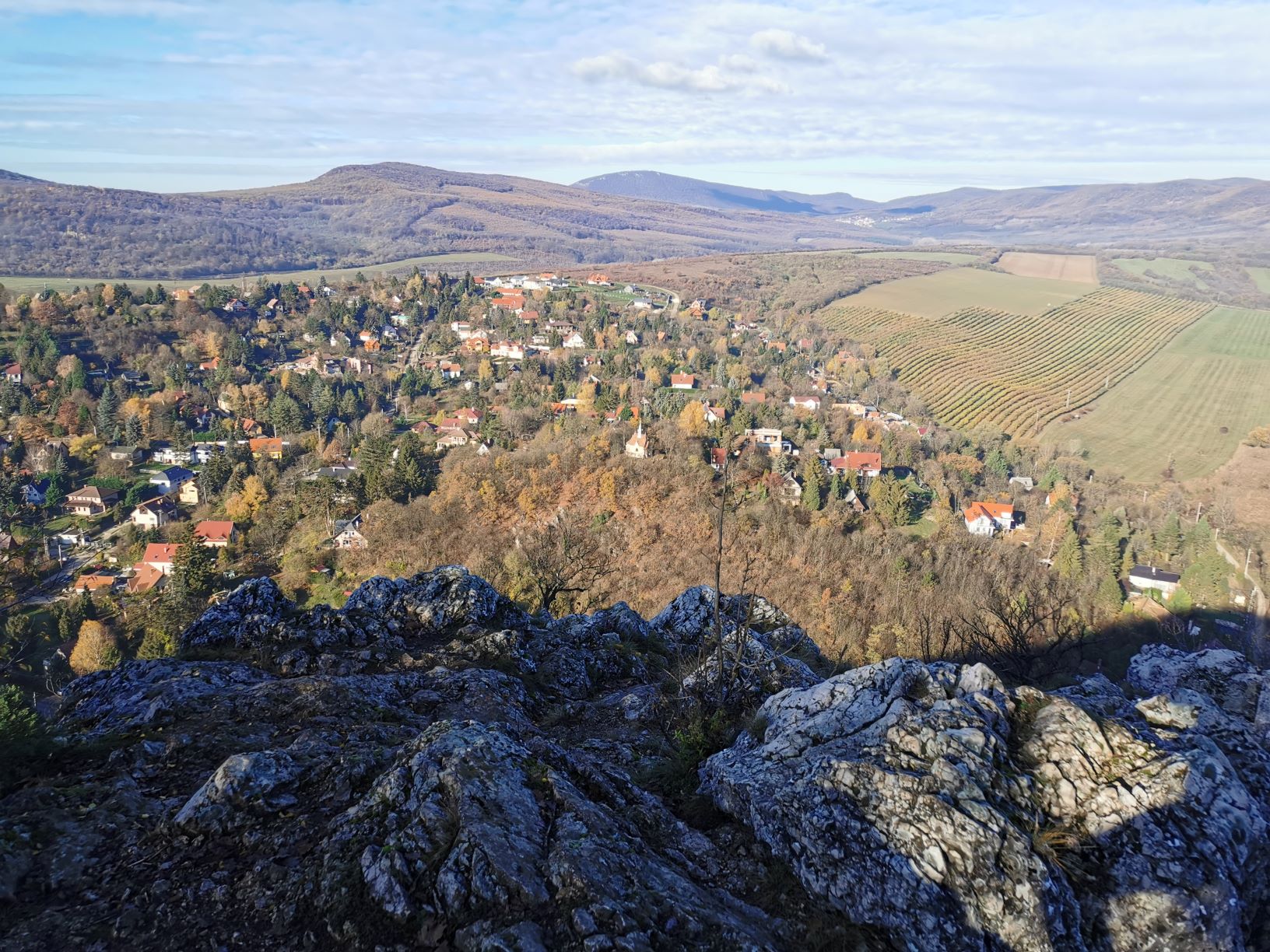 On the hill opposite the cliff, a romantic-style chapel named after St. Hubertus rises, which you can see with a naked eye.  The chapel used to be a popular pilgrimage site. Today its condition is quite degraded and awaits renovation. In the valley of Dera Stream, you can even discover a castle, which was originally used to cure nerves and later lung patients, thanks to the beneficial effect of the climate here.

Leaving the Oszoly Head, the path leads through a flat roof, from which you would not say the first time that it’s an artificially designed area. By cutting down the forest, at the top of the cliff they formed an area suitable for grazing cattle and sheep. Now there are no sheep and cattle here, only wild boars, who are searching mostly for food here. The huge stalkless oaks and grassy meadows offer beautiful views and serve as a popular resting place for forest walkers. 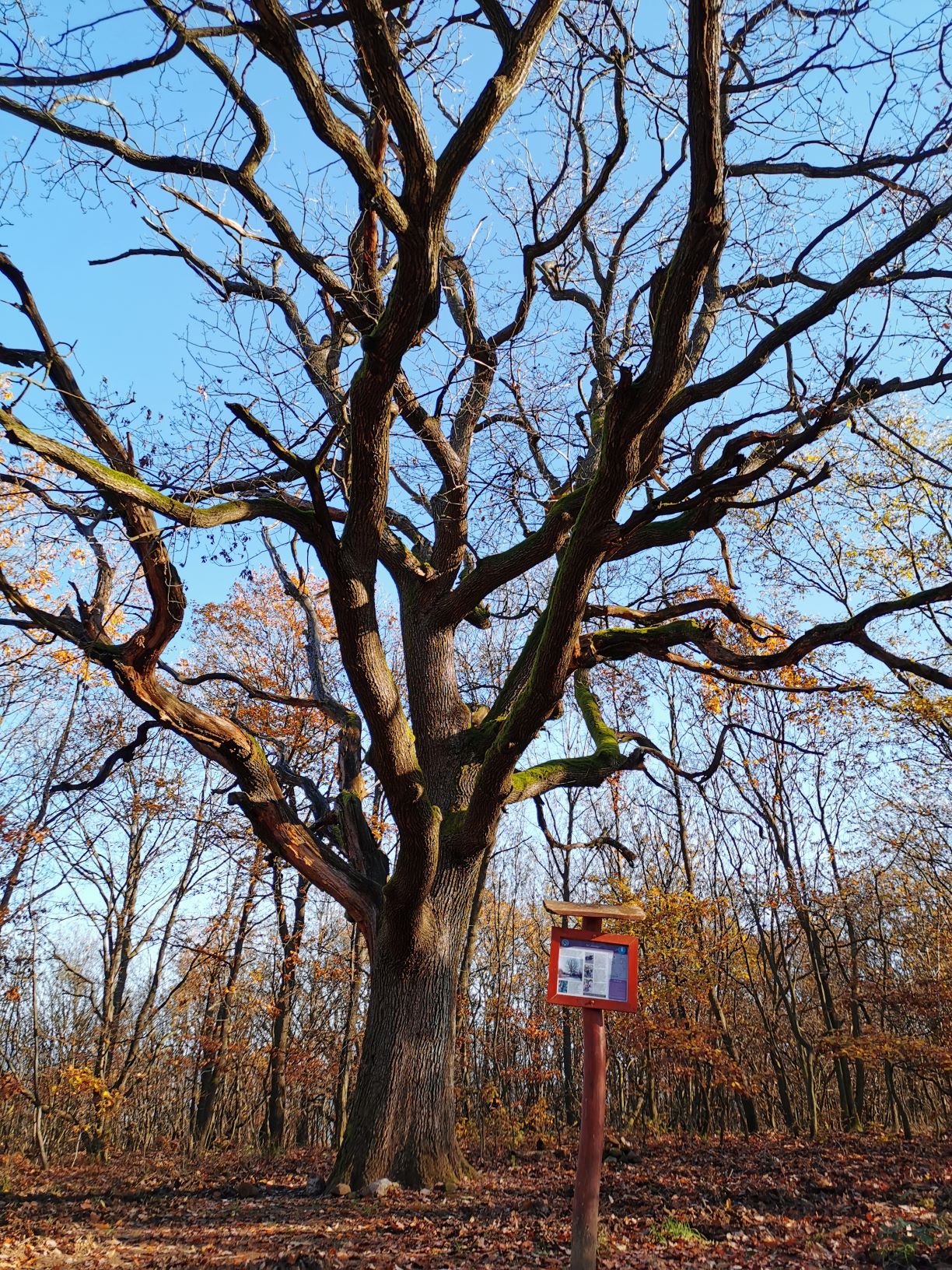 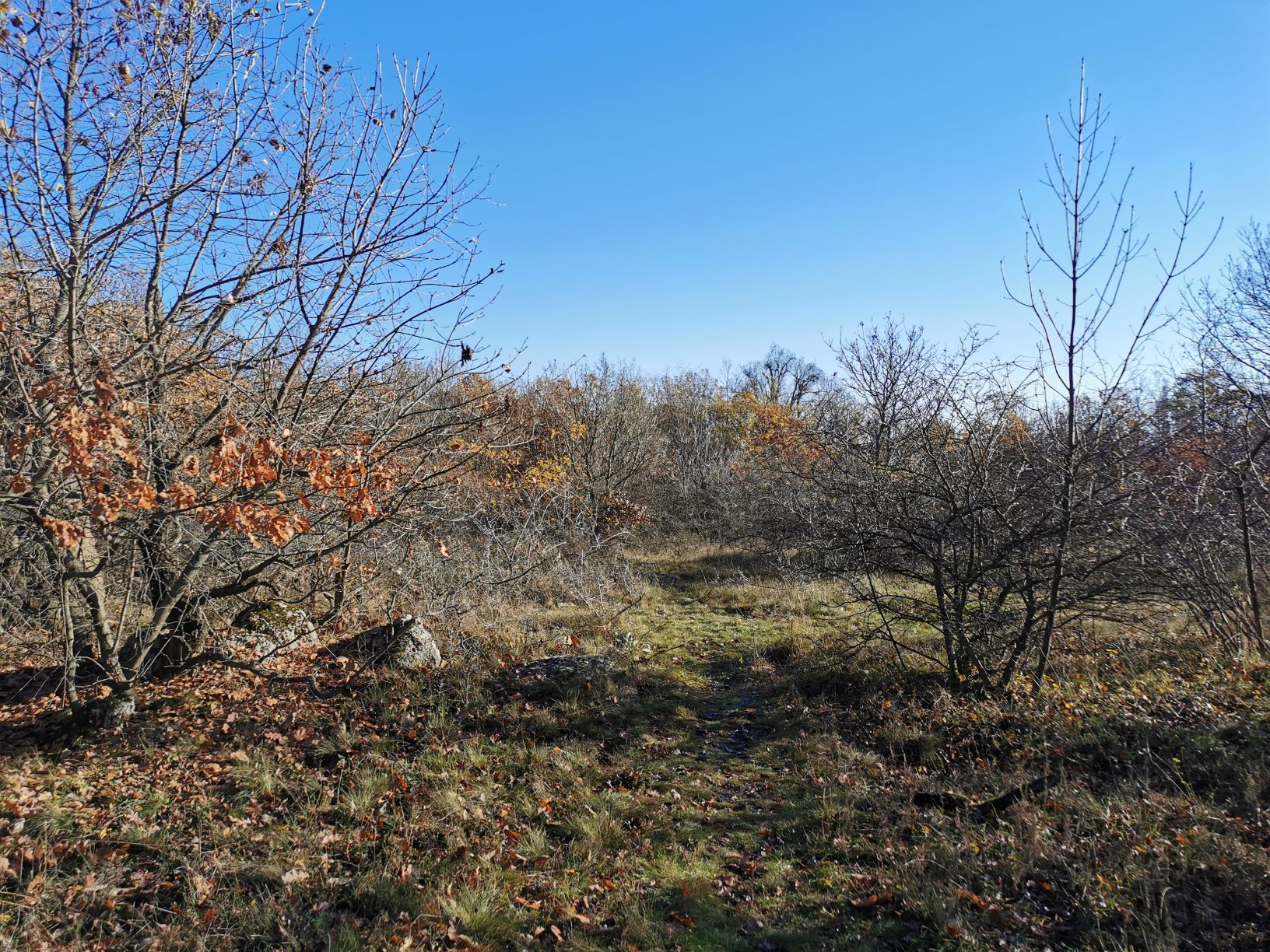 One of the most beautiful stations of the tour is the double-cross marked Oszoly Peak, which offers unparalleled views of the surrounding mountains. From Kis-Kevély (461m), through Csobánka Basin to Dobogókő (699 m), a multitude of hills appears on the horizon. While under the steep rock the most visited rock-climbing school of Hungary takes place. Oszoly Cliff has not been a dire place despite regular climbs, making it a popular place for rock climbing races and cross-country triathlons for years. 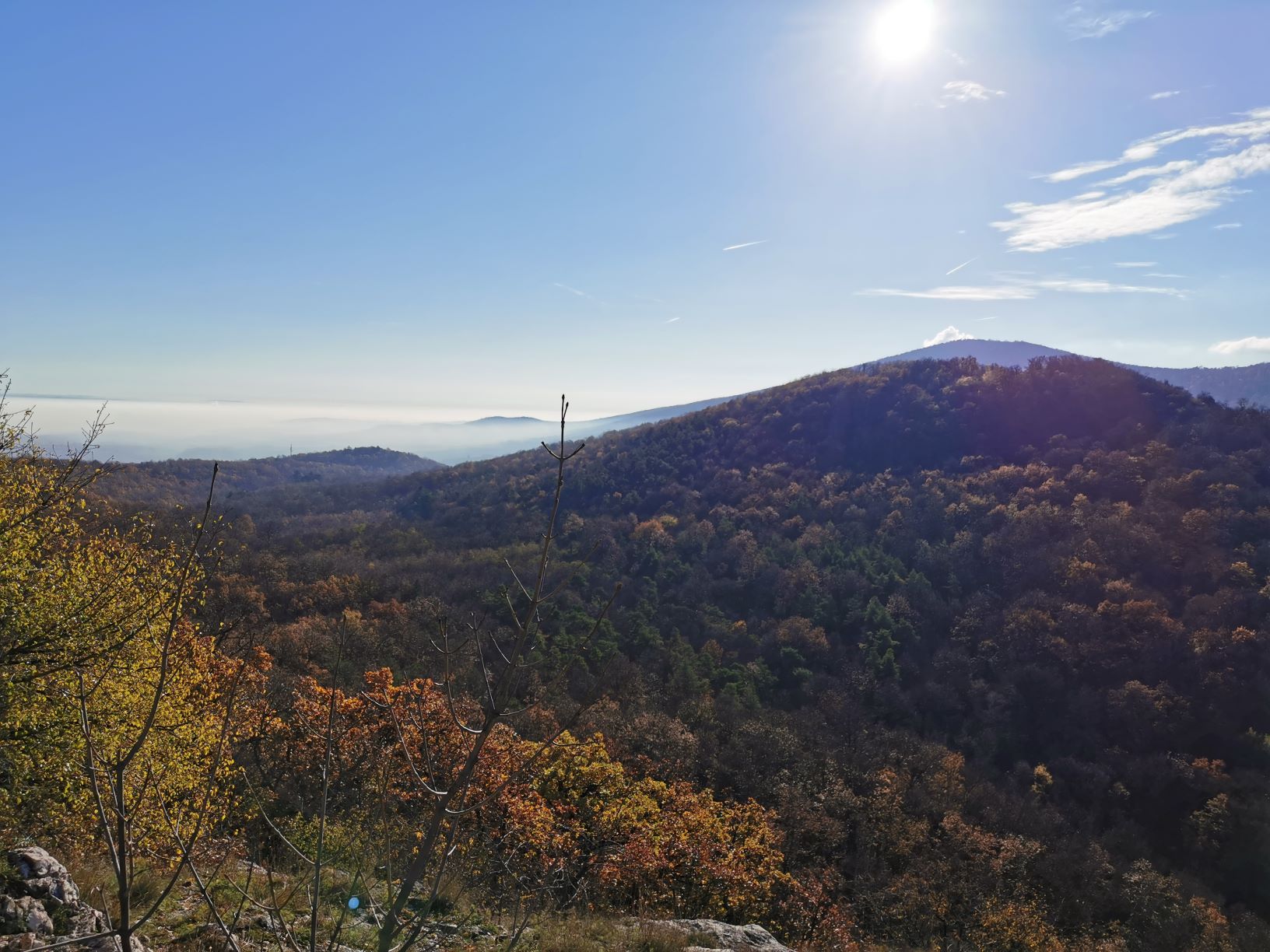 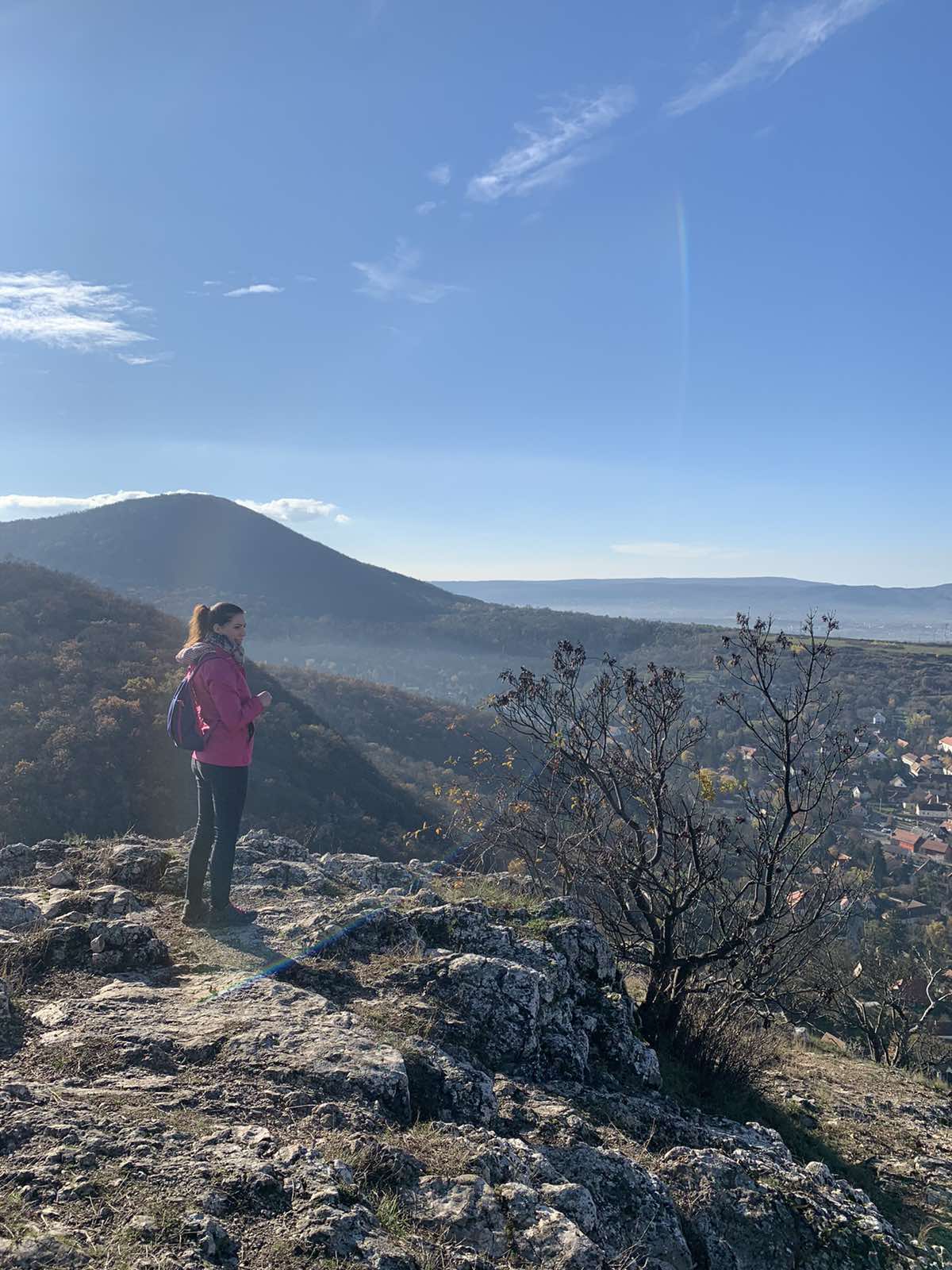 Oszoly Cliff is extremely rich in caves, all of which are protected and can only be visited with special permission. Over the course of millions of years, the limestone rock has been dissolved by rainwater from above, while from below it has been dissolved by thermal water. A dozen caves around Csobánka have now emerged, which are quite difficult to reach by foot. One of the most notable of these is Mackó Cave, which used to be a home for animals and humans in the ice age. Huzatos Cave features a special form of thermal water dissolve, namely the ball booth. Although the size of the Caves of Oszoly does not equate to the world-famous caves of Aggtelek (here) and Postojna (here), the Mexican cenote in which I even dived (here), their existence and historical significance are great and remarkable. 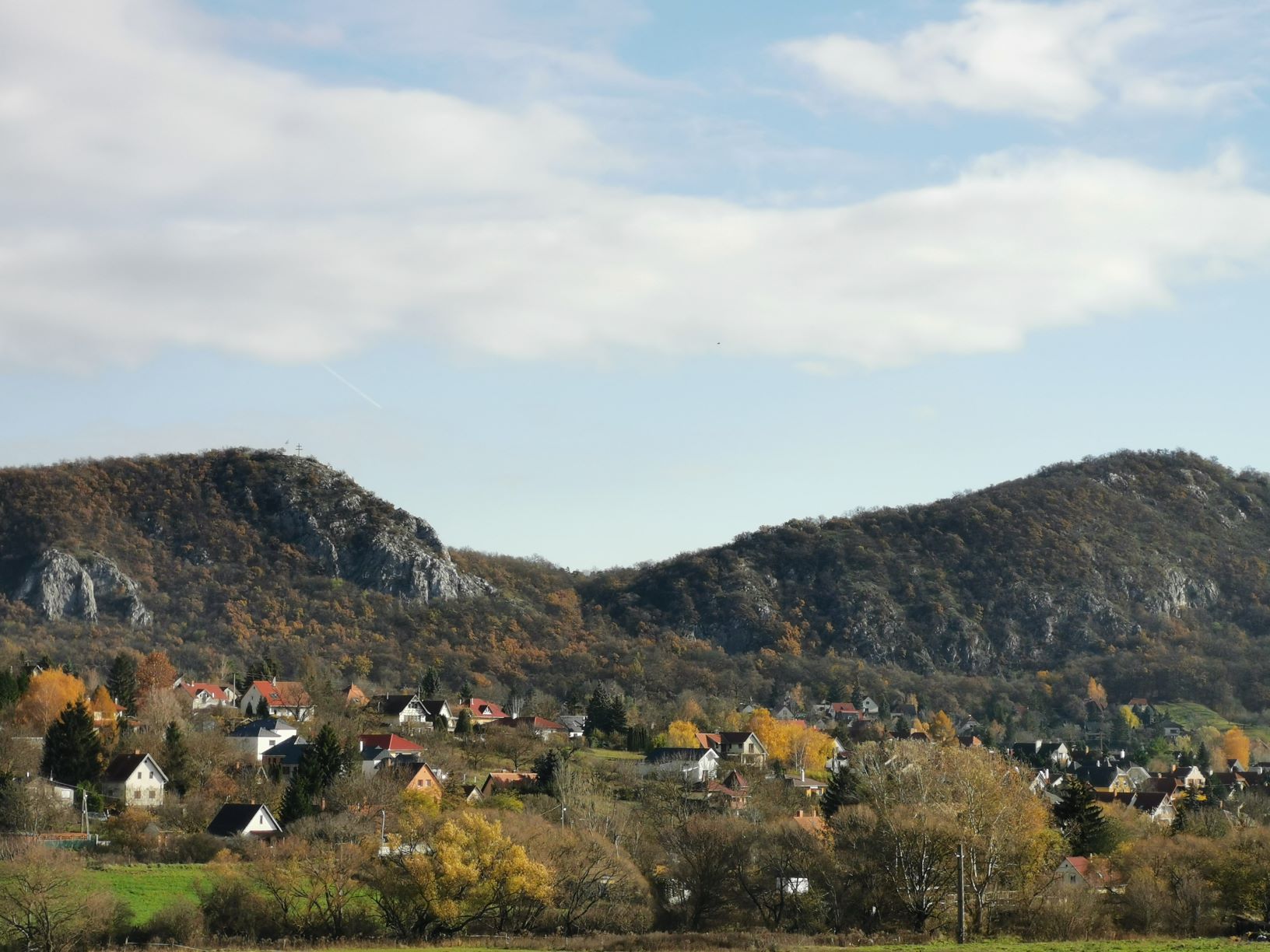 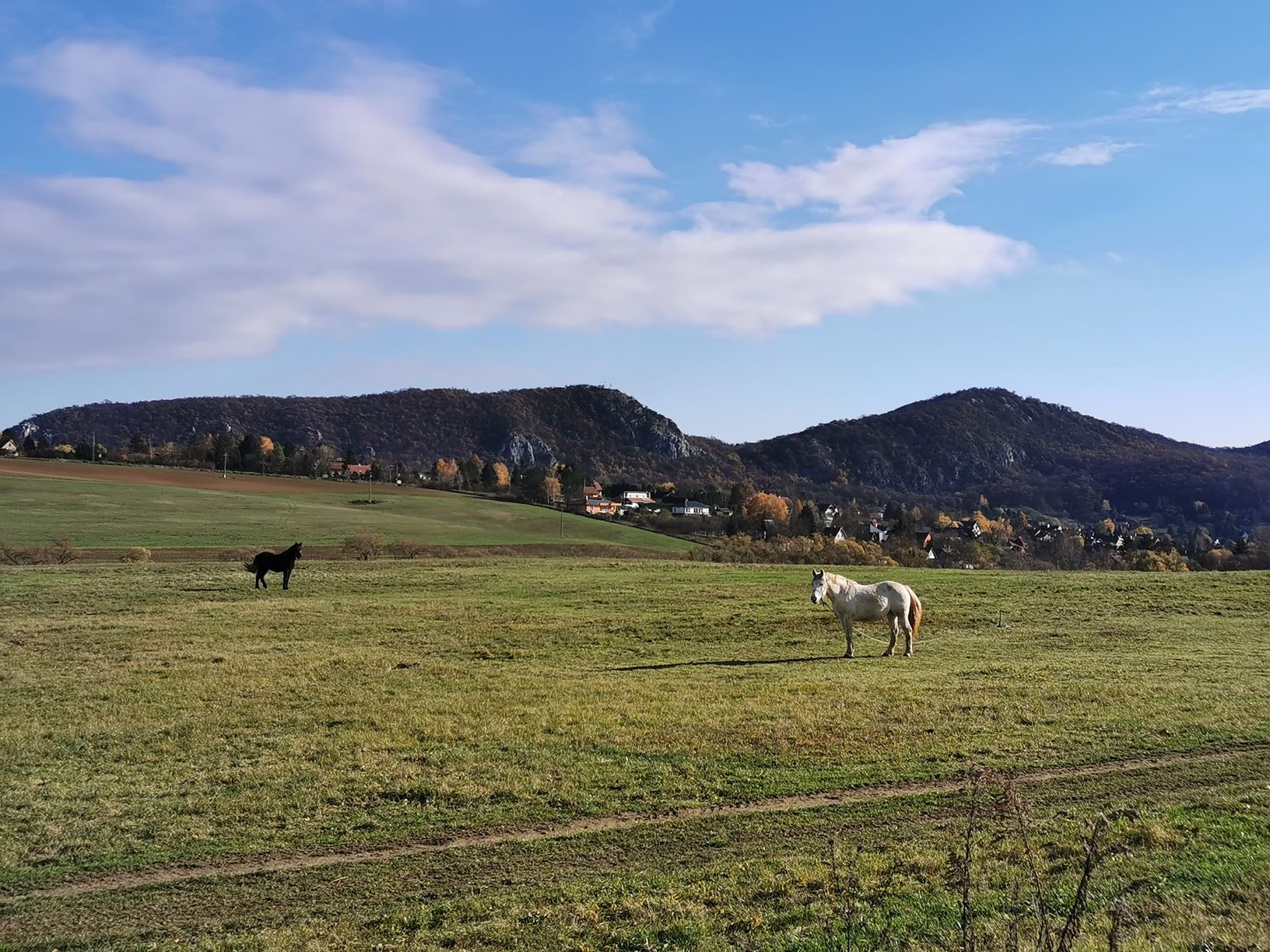 Sandstone mine on Csúcs Mountain

During the tour, you also encounter abandoned sandstone mines. The color of the sandstone here is different from the usual ones, as iron oxide made them rusty and reddish. The mines in Csobánka are now exhausted and awaiting recultivation, but once many Swabians moved here for livelihood purposes. The mining took place in a precise way, with manual de-mining, and lasted from the morning bell to the evening. According to stories, the shift was often longer than it should have been, as the bell ringer was paid to ring later. Many houses in Csobánka, including the church, was built from sandstone, coming from these mines. Be careful, only observe the mines from a safe distance. 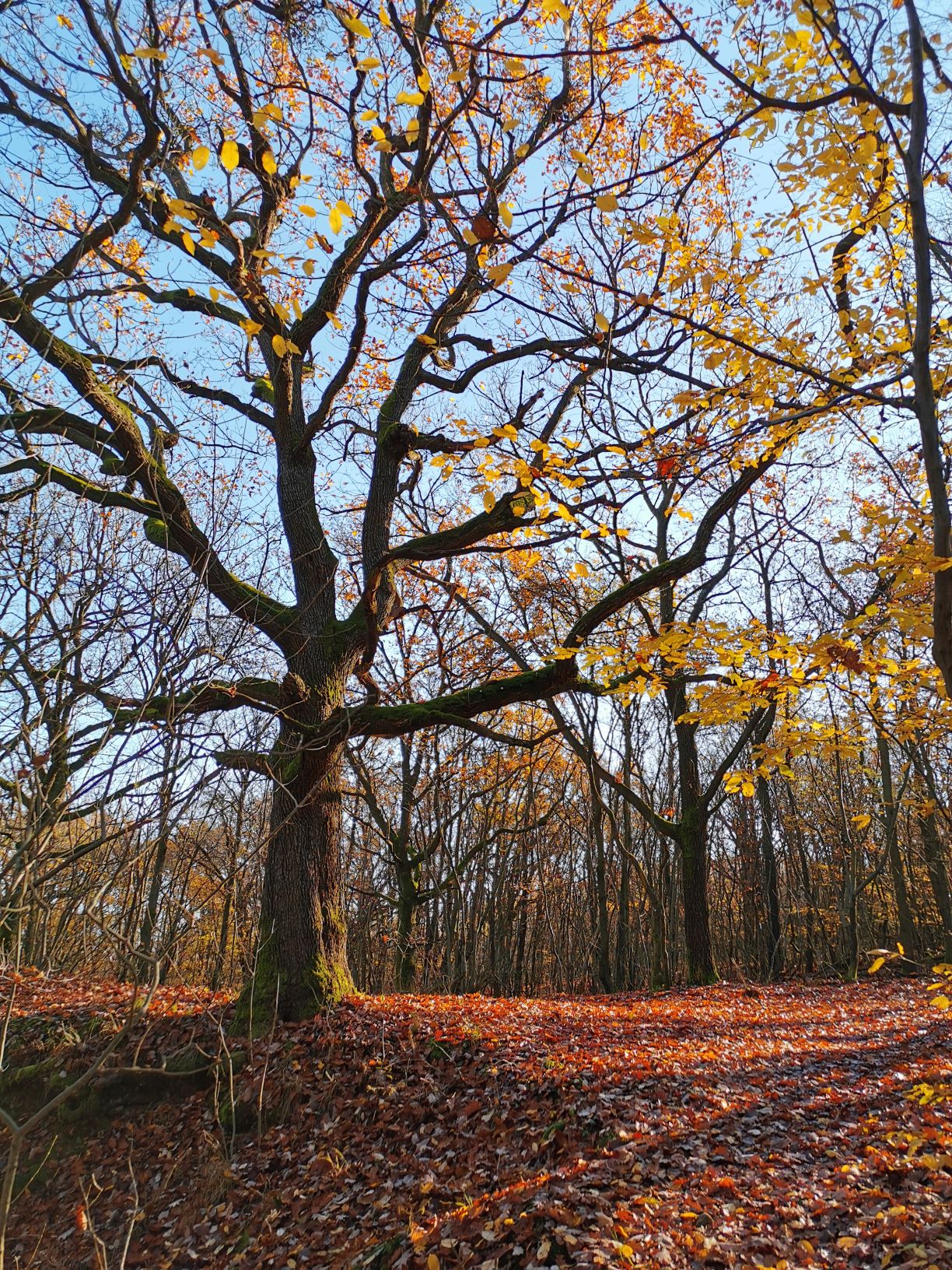 On the border of Csobánka there is the famous healing water on the far land, where a natural trail leads too. Even the arrival was a special experience, as we had a horse-drawn lead-up along the way, with a mother and her foal. The holy fountain was originally a pilgrim’s place for Orthodox Serbs, and its Catholic cult is of later origin. Another famous holy place, which is located in Nógrád County, I wrote earlier here. 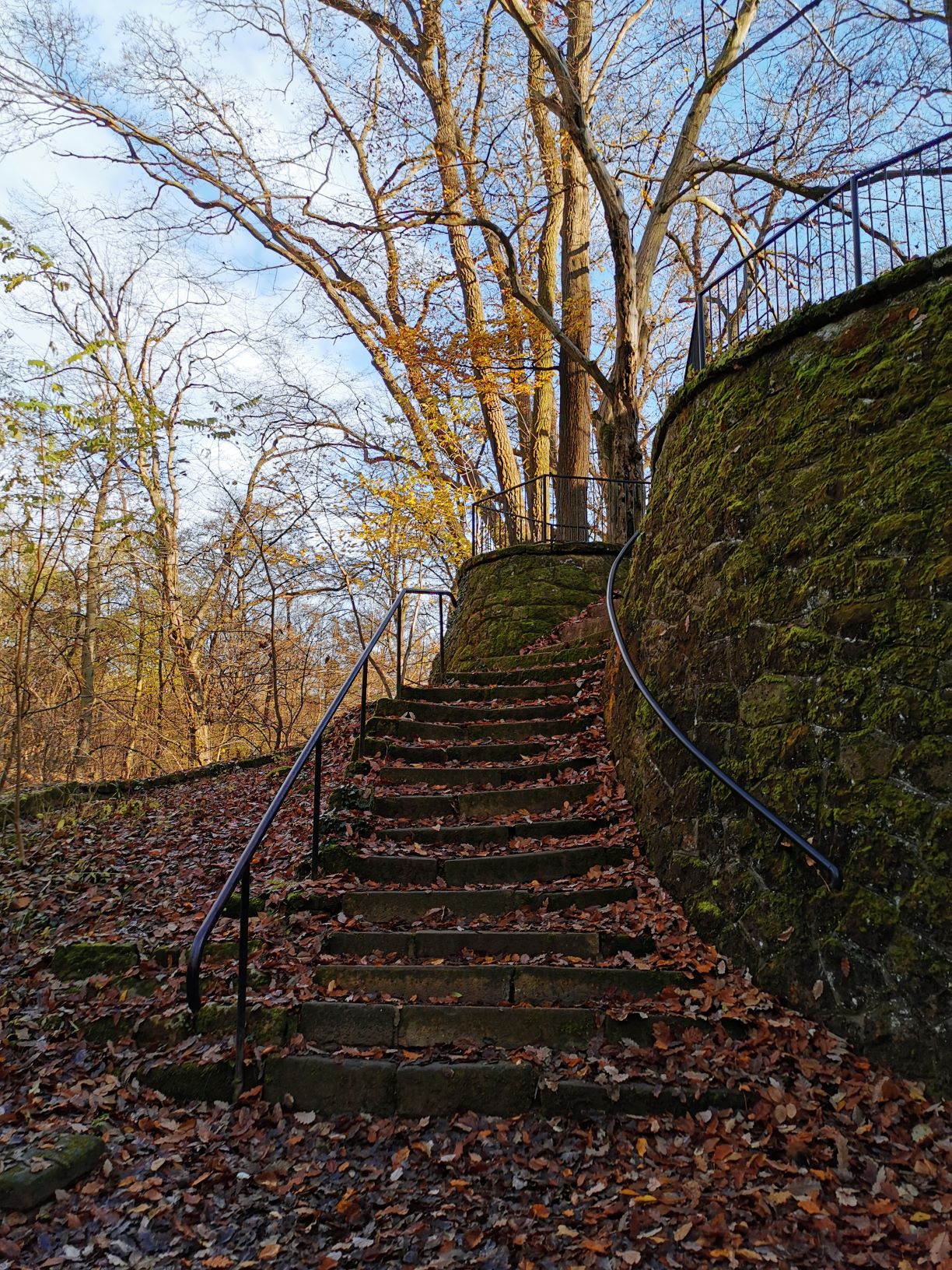 The history of the Fountain of Csobánka dates to the 1840s when the Virgin Mary with the baby Jesus on her arm. appeared in the vision of a shepherd grazing his sheep. This vision was later published to others, and as a result, the place was called Mary’s Well. The source later became the scene of legendary healings. In 1933, local parish priest Pillmann Alfonso reported that patients with fevers immediately got better when they consumed the water, while Mária Lenderer regained her eyesight. 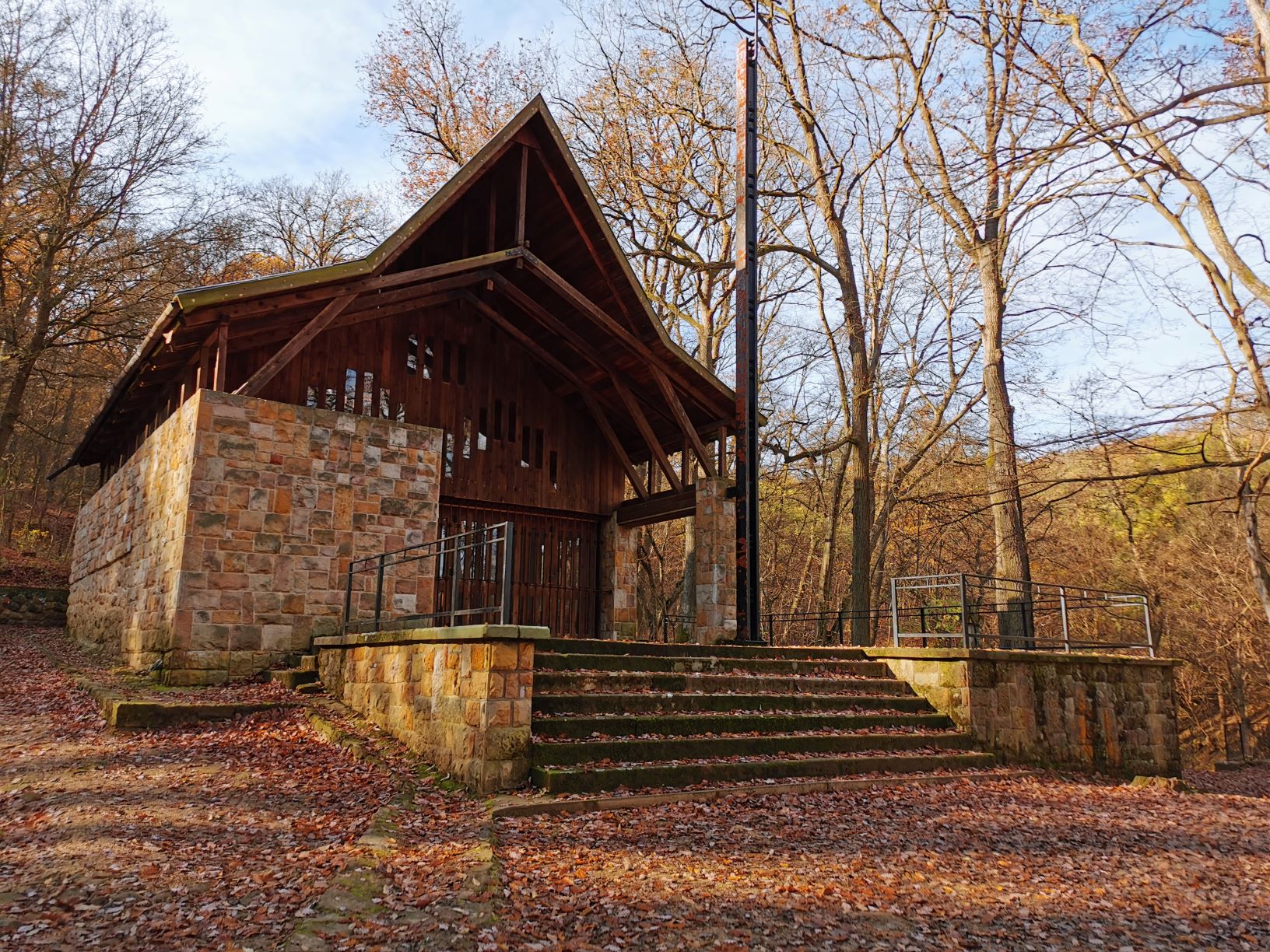 Towards the miracle fountain, a chapel of Lourdes style was erected, with a statue of Our Lady. Built-in 1936, the forest shrine now opens only on special occasions. But the sacred well is available every day of the year for those who wish to heal themselves physically. Or just for forest hikers who come here to rest. 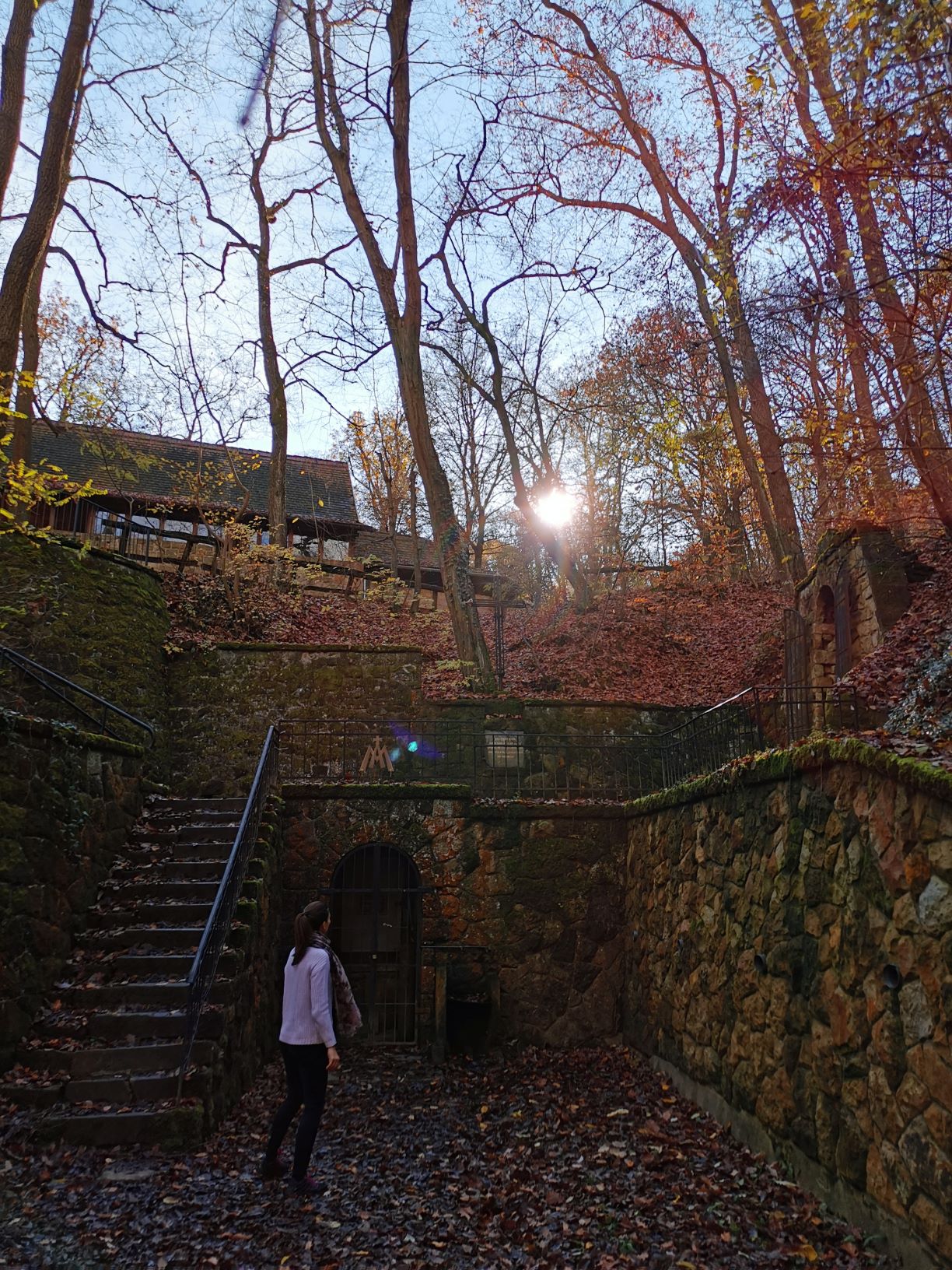