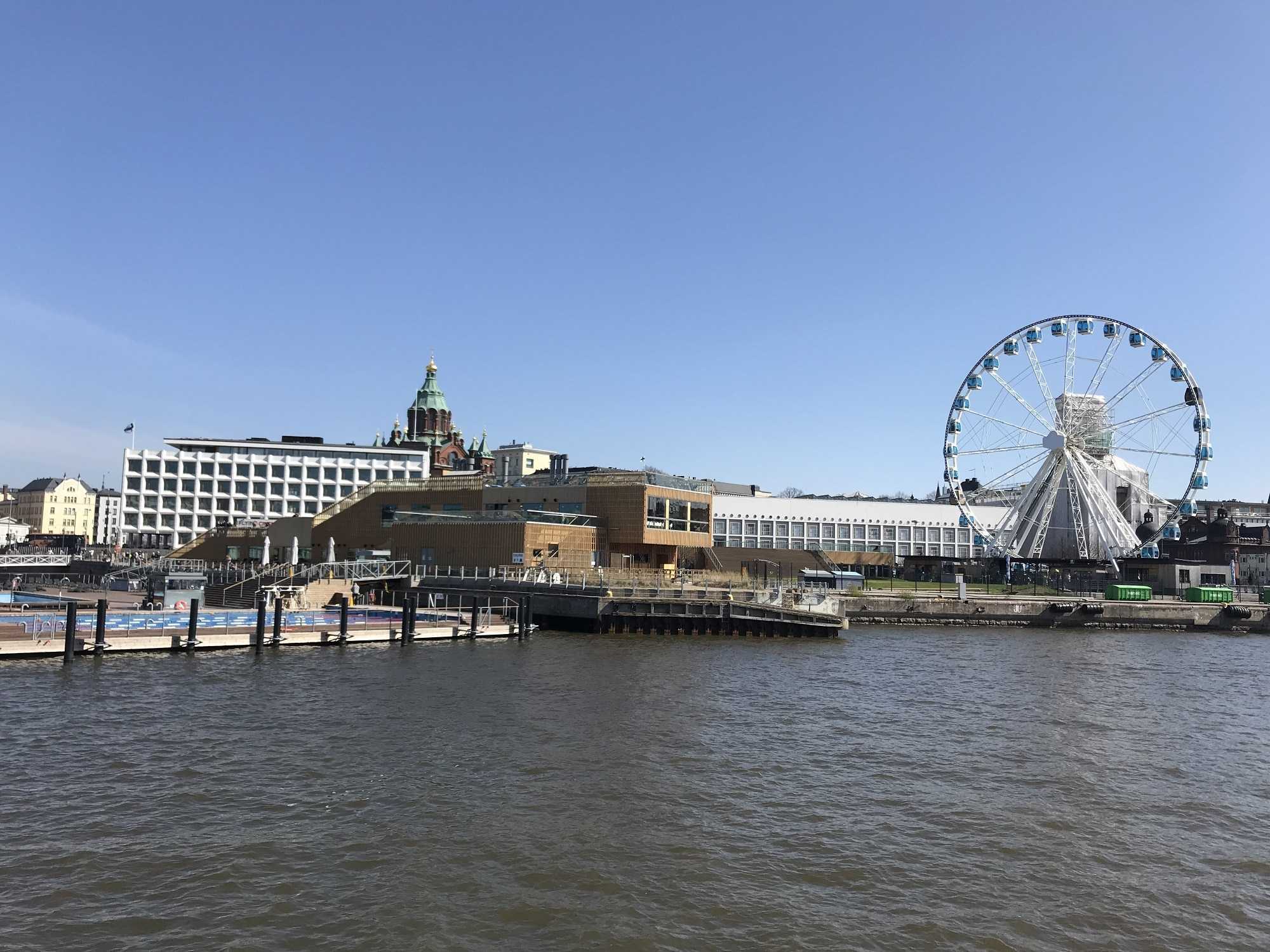 Helsinki, gateway of the Baltics

The Finnish capital gained many notable adjectives in the past few years’ surveys. Like it’s the 9th most liveable city on the earth. Or the most honest city, which I don’t know what it means, but if Readers Digest says, I must accept it. In fact, the Finnish nation is the happiest in the world, as revealed in the United Nations’ last happiness survey in 2018. Well, all these facts are very persuasive to live there, but what should a tourist do if he doesn’t want to live in the northernmost capital of the European continent, just preparing for a short visit?

I’ve had a cherished dream for a long time to see the Baltic States. In the classical sense, Finland does not belong to the Baltic, but the most obvious thing about the direction of the route was to travel from north to south to the countries surrounding the Baltic Sea. That’s how Helsinki became the springboard and the gateway to the Baltics for me.

I arrived in Helsinki late at night in a small carry-on suitcase in which I could fit all my stuff for one week. In vain, I was a college student, I learned to pack and get ready quickly. Since I arrived around midnight, I was specifically looking for accommodation in the vicinity of the airport that could be self-opened with a code and the owner does not have to stay on-site at night to let me in. Fortunately, this is already possible in more and more places abroad, so I prefer this solution wherever I travel.

The next morning, I hopped fresh and fit on a train just to test another means of transport after the plane, and I didn’t stop till the Helsinki train station to drop off my package and take the Finnish capital on foot. Without the need for completeness, I brought you a Top 5 list of what I liked the most about Helsinki and what I recommend for a one-day tour. Note, if you wish to visit all these sites, you need to walk 24 km.

One of the city’s most stunning buildings for me was the cathedral built in neoclassical style. In addition to being located at Helsinki’s highest point, with its blinding snow-white walls, is impossible to miss. Helsinki used to be called the white city of the north. Not because of the white nights, when it is bright almost all days in the summer, but because Helsinki boasts an outstanding number of white granite buildings.

Helsinki Cathedral was built between 1830 and 1852 by the order of Russian Tsar Nicholas I, who also played the role of Grand Duke of Finland. Until 1917, Finland was under Russian control and even after the declaration of independence, the country managed to preserve its sovereignty over Russia only at the cost of bloody civil wars and significant sacrifices. Even in World War II, attempts were made to make Finland part of the great Soviet Empire again, so it’s not a coincidence that Finns do not have a very good relationship with the Russians. That’s why it’s surprising that in Senate Square in front of the cathedral, there is a statue of the Russian Tsar Alexander. He made numerous attempts to modernize the country during his nearly 30-year reign, and even supported the Finnish autonomy. This probably allowed the statue to remain in Helsinki after the declaration of independence in 1917.

Speaking of monumental and religious buildings, you can’t leave the Orthodox church without a word. The Uspenskin Cathedral evokes Russian times as they naturalized this religion in the country. According to statistics, there are about 20,000 Orthodox Christians in Helsinki and The Uspenskin Cathedral is also the seat of the Orthodox bishopric. The building offers an amazing view with its red bricks and greenish-blue domes, which are only further toped by the dreary squeals that open around it. Unfortunately, we were only able to see the church from outside because it was just closed. By the way, it can be visited free of charge, but in many places, it was written in advance that it is not always open to visitors. 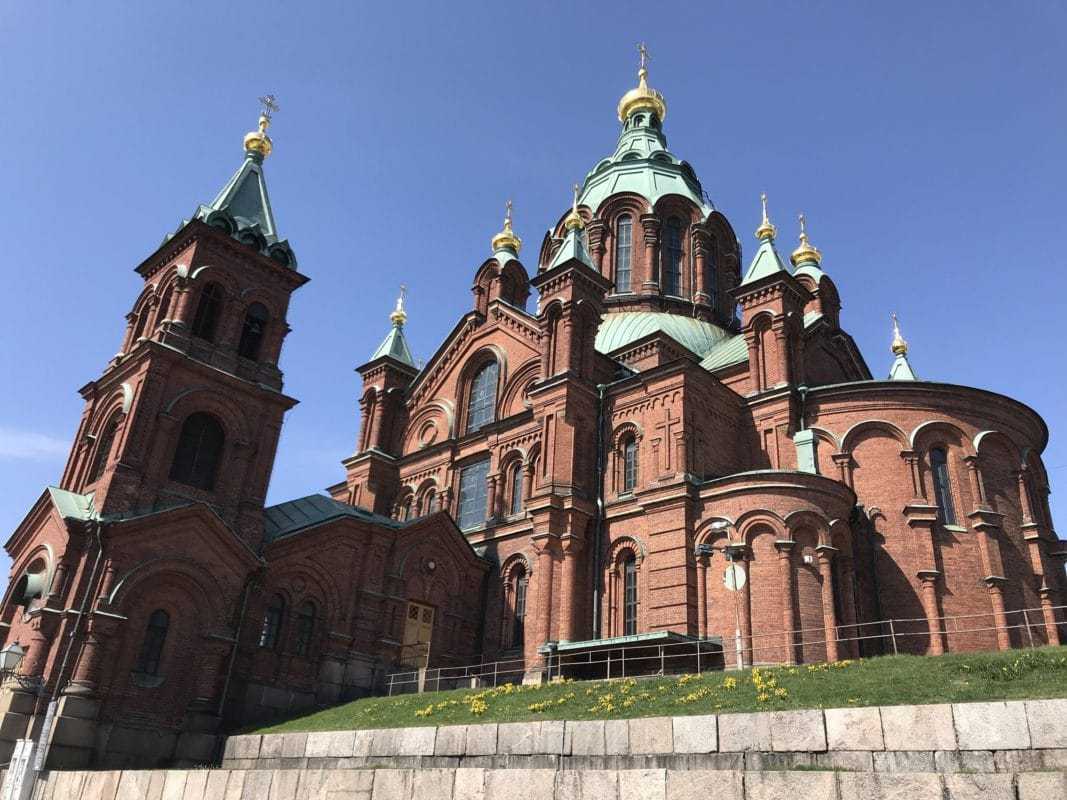 Many of the 315 islands surrounding Helsinki are uninhabited and smaller than 3 hectares. If you want to take a short boat tour, it’s definitely worth heading to Suomenlinna. Boats to the island leave from the city’s port approximately every 20 minutes. Contrary to its name, Suomenlinna covers not a castle but a military fortress too and belongs to Helsinki’s only one UNESCO World Heritage Site.

Throughout history, Swedes, Russians and Finns have alternated on this island, which had a significant naval and defense function in the city’s life. In addition to being a popular tourist destination and historical heritage, the island is still inhabited by about 800 people. You can spend a day here if you wish as there are so many interesting sights on the six islands connected by bridges. We only had a few hours to explore but it’s definitely worth coming here only for a shorter trip too.

Fortunately, we were able to explore the most important parts, such as the huge pink King’s Gate of Kuninkaanportt, which is also a commonly used symbol of Suomenlina. We saw the church which is also a lighthouse, the tunnels, the dry port and a submarine. The latter only from the outside as it was closed.

Finn’s greatest composer, Jean Sibelius, was born in the second half of the 19th century and became one of the dominant figures in the national resistance to Russian oppression. His best-known work, Finlandia, became the second anthem of the Finnish people, and his birthday is also a day of Finnish music and it’s a national holiday. As a tribute to Sibelius’s musical work, in 1960 the city appointed a competition to make a public monument, which Eila Hiltunen was commissioned to create.

The result is a composition of very abstract, mostly floating organ pipes. The dimensions of the monument are quite spectacular: it is made up of 600 steel tubes, it weighs 24 tons and is 8.5 meters high. A scaled-down replica of the monument can be found in the UNESCO Centre of Paris, and Finland has donated a similar Hiltunen work to the UN headquarters in New York.

Speaking of astounding works, it is worth taking a detour to the Lutheran Rock Church (Temppeliaukio), which name shows its uniqueness. The church is carved into a granite rock and is one of the masterpieces of Finnish architecture and surprisingly it has neither a bell nor a tower.

But on the other side, it has a heated glass-roofed, single-air room, through which the sun’s rays give the place a truly unique atmosphere. Thanks to its excellent acoustics and huge organ, Helsinki’s Rock Church is home not only to religious events, but also to concerts.

I could also list a number of other attractions in Helsinki, where I visited in one day, such as the beautiful public park with the observatory, the Kauppatori Marketplace, which is bustling with vendors, or the port where the vast ocean-goers are docked temporarily. Life, however, is like a Ferris wheel. One minute you’re at the top, the next you’re at the bottom. If you stay in your seat and enjoy the cycle, you’ll be back on top! For me, this time the Ferris wheel is going sideways, and my adventures continue in Tallin. Come with me, let’s explore the Baltics together. 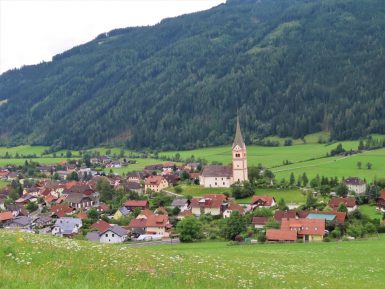