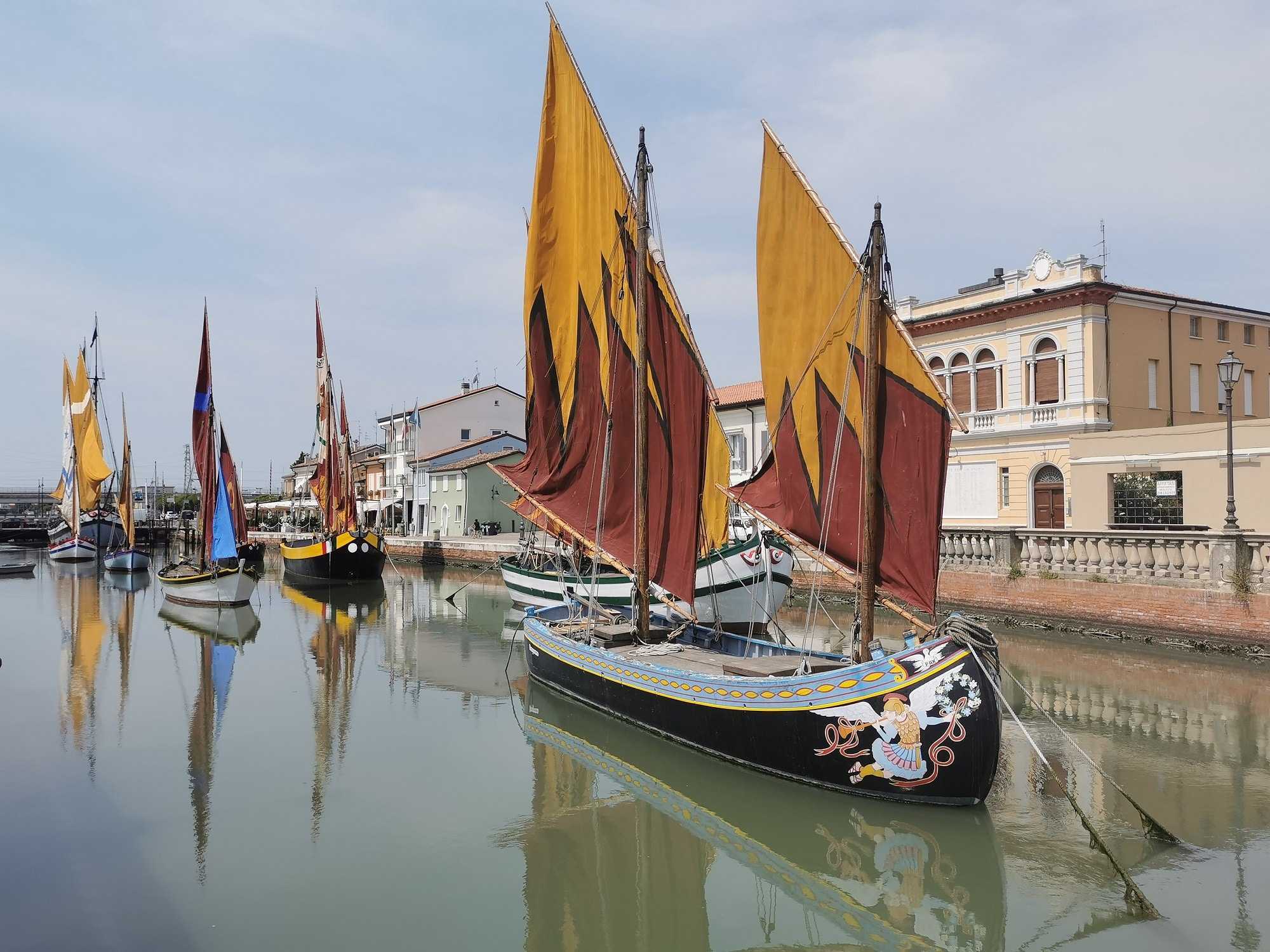 Have you ever heard of Cenesatico, also known as mini Venice? This is the city that Leonardo da Vinci has designed. But how had Cesenatico become the child of the sea and what can we do here? Traveling to Italy means much more than visiting large and iconic cities where low-cost flights are launched.  Of course, „Roma aeterna est”, i.e. Rome is the eternal city, but if you had done all this, it is also worth visiting places within Italy that are not written in guidebooks and magazines. In secluded and lesser-known places, where the visitor gets the feeling of dolce vita in the same way as in a crowded big city without tourists all day. And you don’t even have to line up to take a photo that doesn’t have at least 10 more people on it. 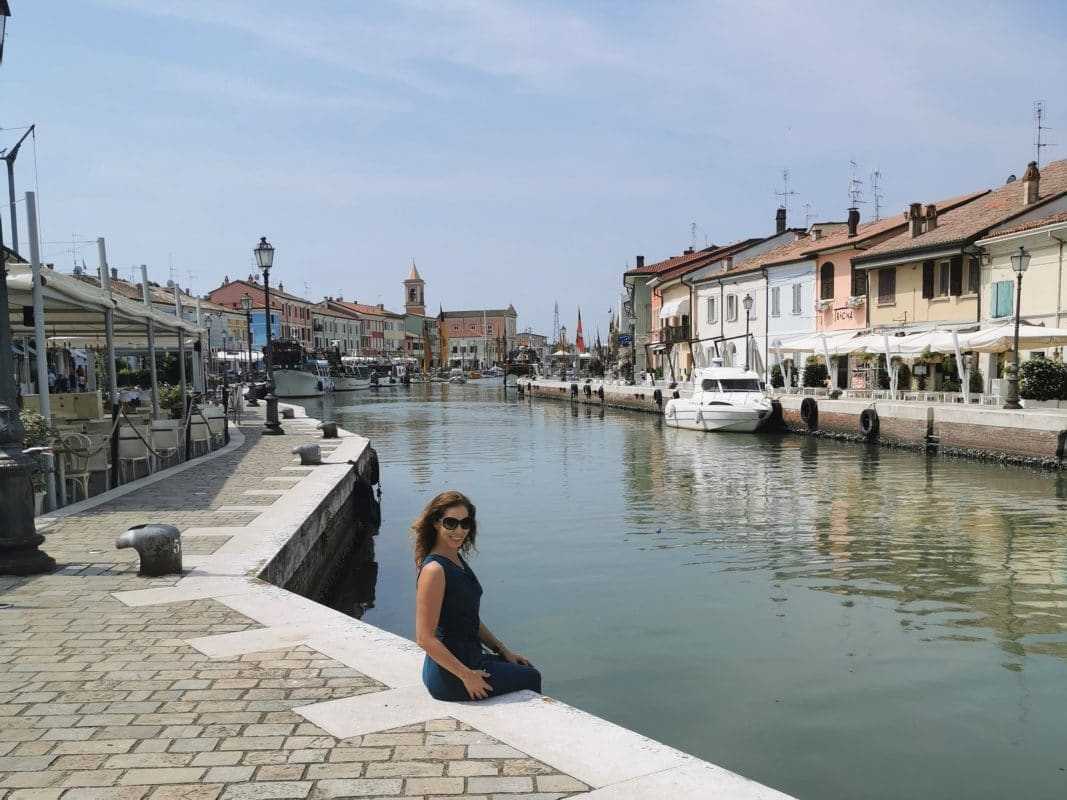 But how did I end up in Leonardo’s channel city? First, I bought a cheap flight ticket to Rimini, from where I first traveled to San Marino. Then, a day after I spent my time on the Italian Riviera and visiting Rimini’s old town, which anyway is worth visiting , I headed north on the beach of Emilia Romagna and didn’t stop all the way to the town of Cesenatico.   I first heard about the place from a nice Hungarian blogger living in Italy. I Googled the city’s name and after seeing the colorful houses on the banks of the canal, I didn’t have to convince myself much about visiting the city one day.  I’ve thematically collected what you need to know about Cesenatico. 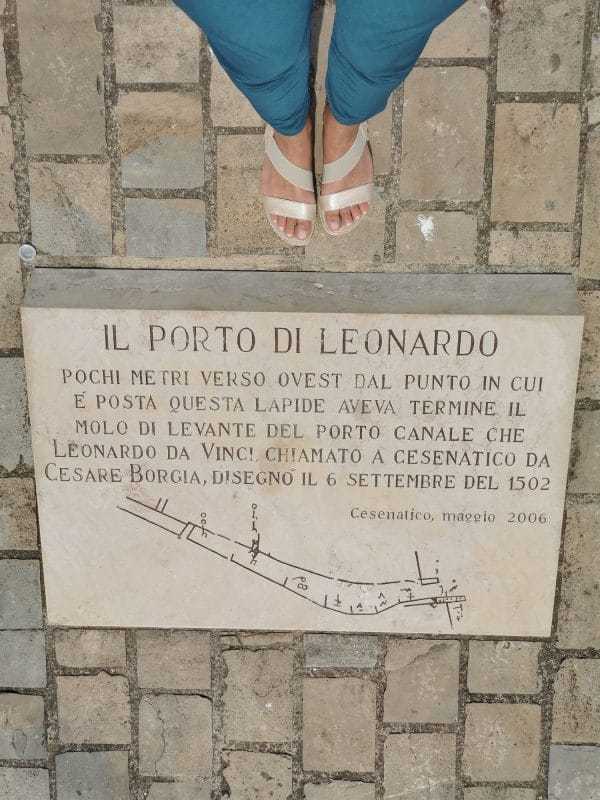 Cesenatico is 23 km from Rimini, from where the easiest way to reach the city is by bus. But it is also only 32 km from Ravenna. We rented a car at Rimini Airport after arrival – which I already described my calvary in my closed Facebook group – and strictly adhered to the 70 speed limit on the otherwise two-lane road. Advice: if you go by car and use Wazze (in Italy there is no roaming, so it is obvious), then the center of Cesenatico will not even happen to be the area around the city. 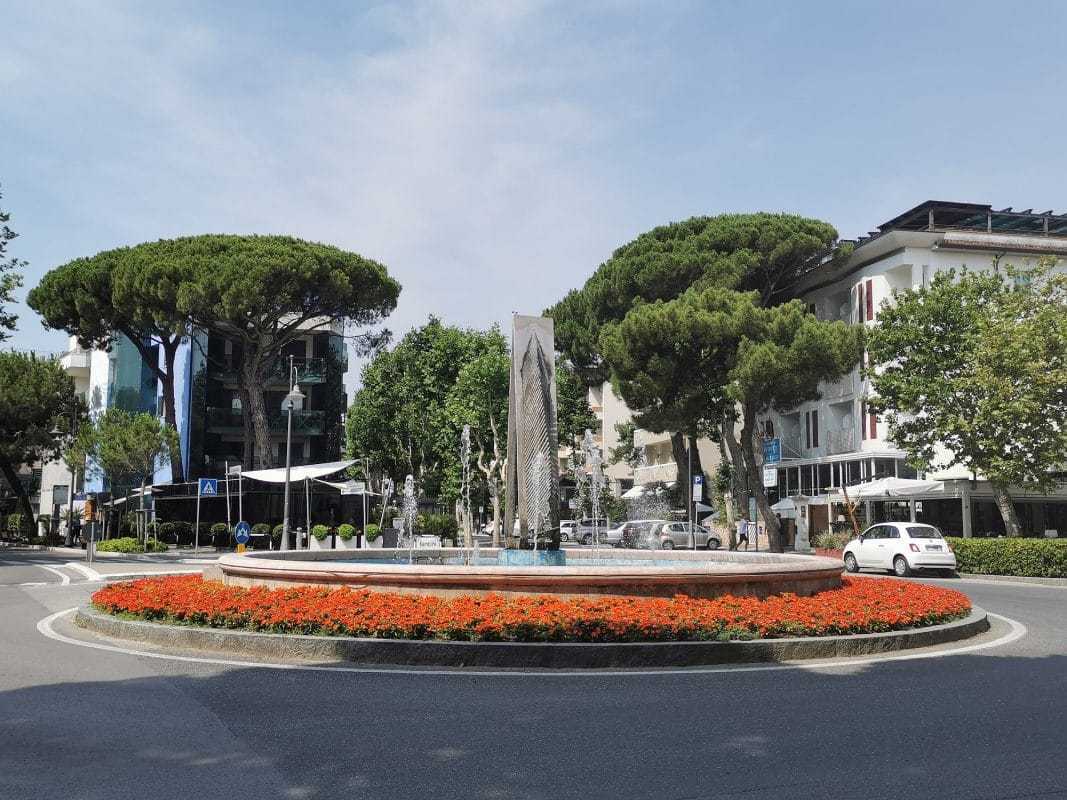 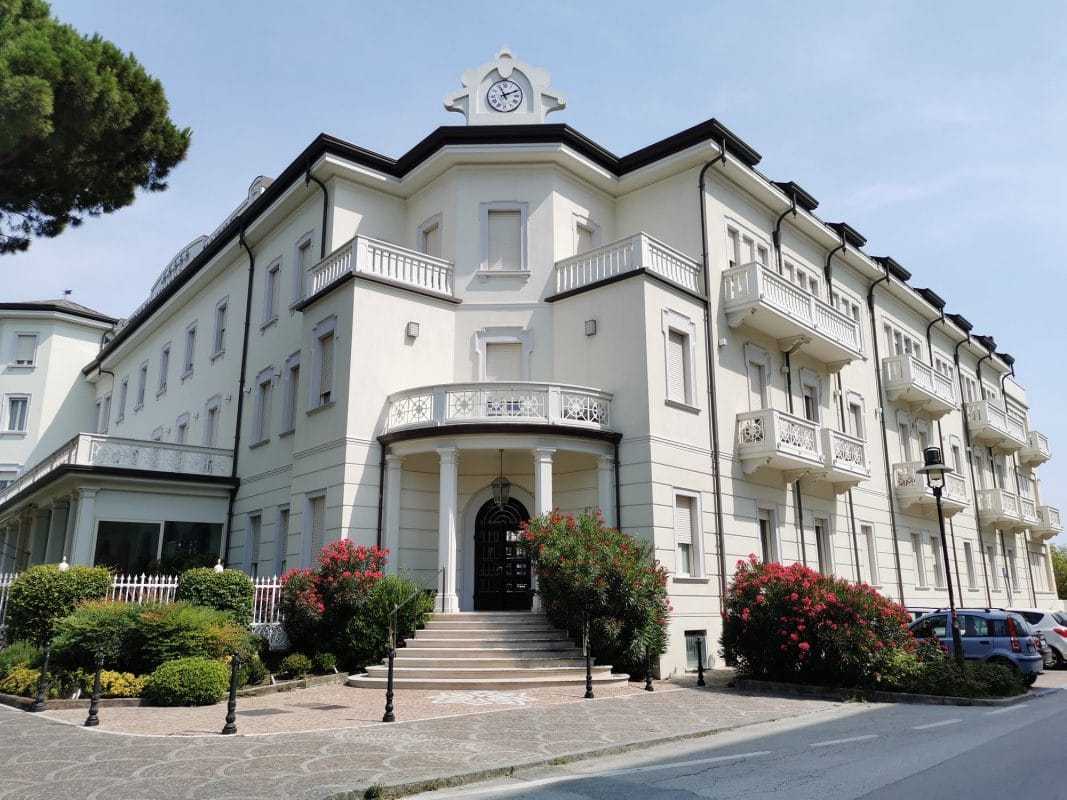 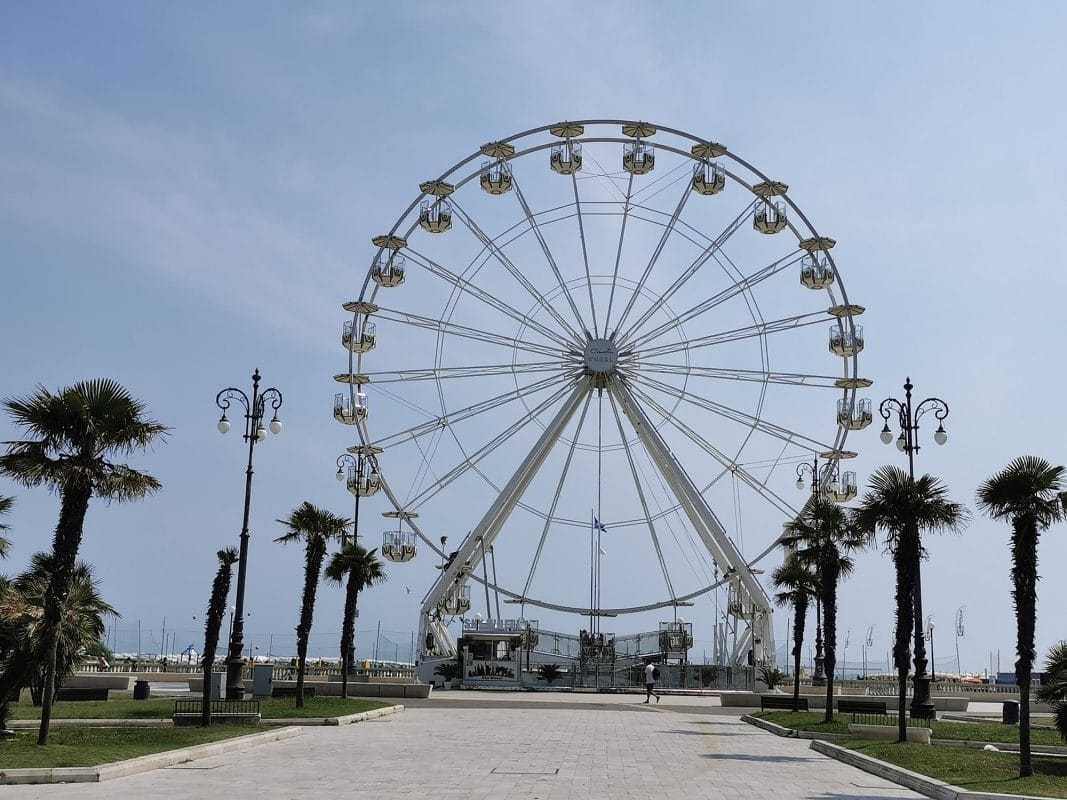 Although I can’t raise a lot of objections to huge citrus trees and seaside cafes, in fact. If someone wants to go to the city and not walk 30 minutes in the otherwise not-so-big city in a sun, Piazza delle Conserve is worth giving as a reference point. Which, by the way, is a famous place

Cesenatico’s roots date back to 1324, when the former fishing village expanded into a port; This set the city on its conquering sea voyage. Jumping a few centuries in history, it’s 1502. The famous Italian polymath (painter, inventor, sculptor, architect and many other titles), Leonardo Da Vinci went up to the top of a tower, looked around and thought that not only the city should conquer the sea, but vice versa. He designed a 2 km long drain within the settlement, which, although cut the residential area in half. But it also established a direct link between fishermen and the sea. Thus, practically from the “garage” of the two-storey apartment buildings, the boats were able to leave for the sea in the mornings and then bring the fresh goods to the house. 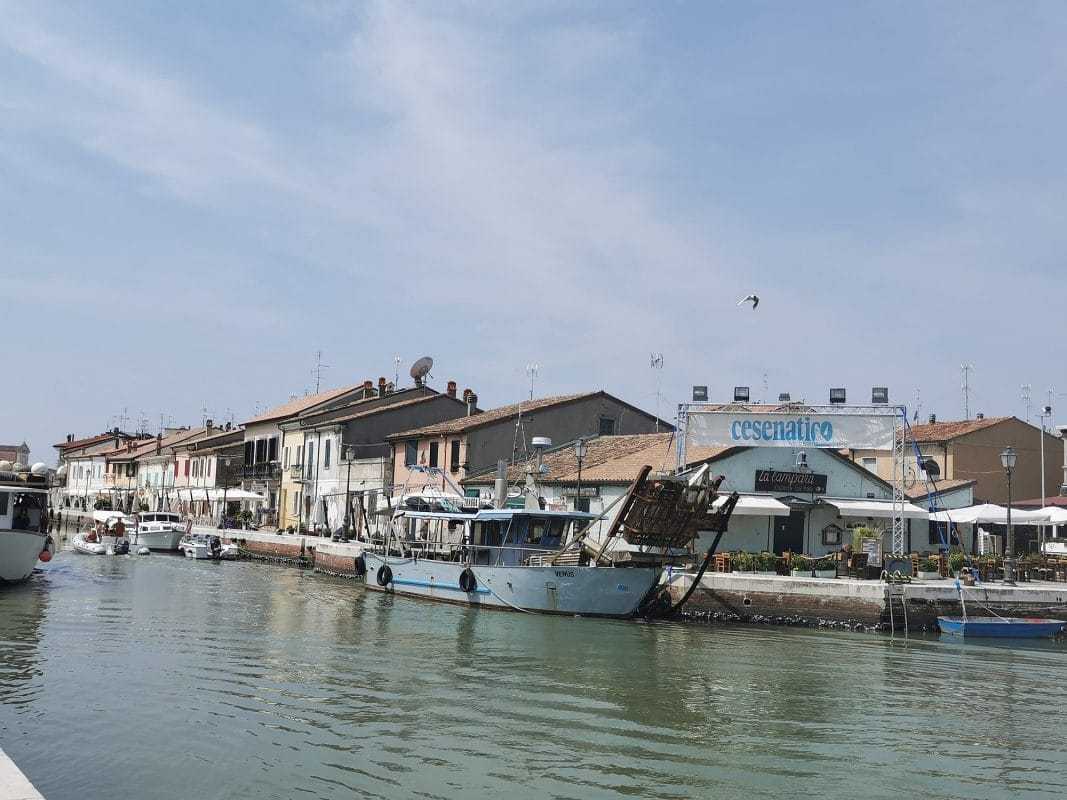 Leonardo da Vinci was asked to design the drain by Cesare Borgia himself, who was the illegitimate son of King VI. He became the ruler of Pope Alexander and later of much of Renaissance Italy. The Borgias have always been known for their ambition, but thanks to them, Cesenatico has made another mini Venice on the Adriatic coast (and, of course, many cities claim the same title). Another famous man’s name is tied to the settlement, who is Garibaldi. In 1849, he boarded a ship here in the port of Cesenatico to fight the Austrian forces that were in control of Venice on the northbound side. 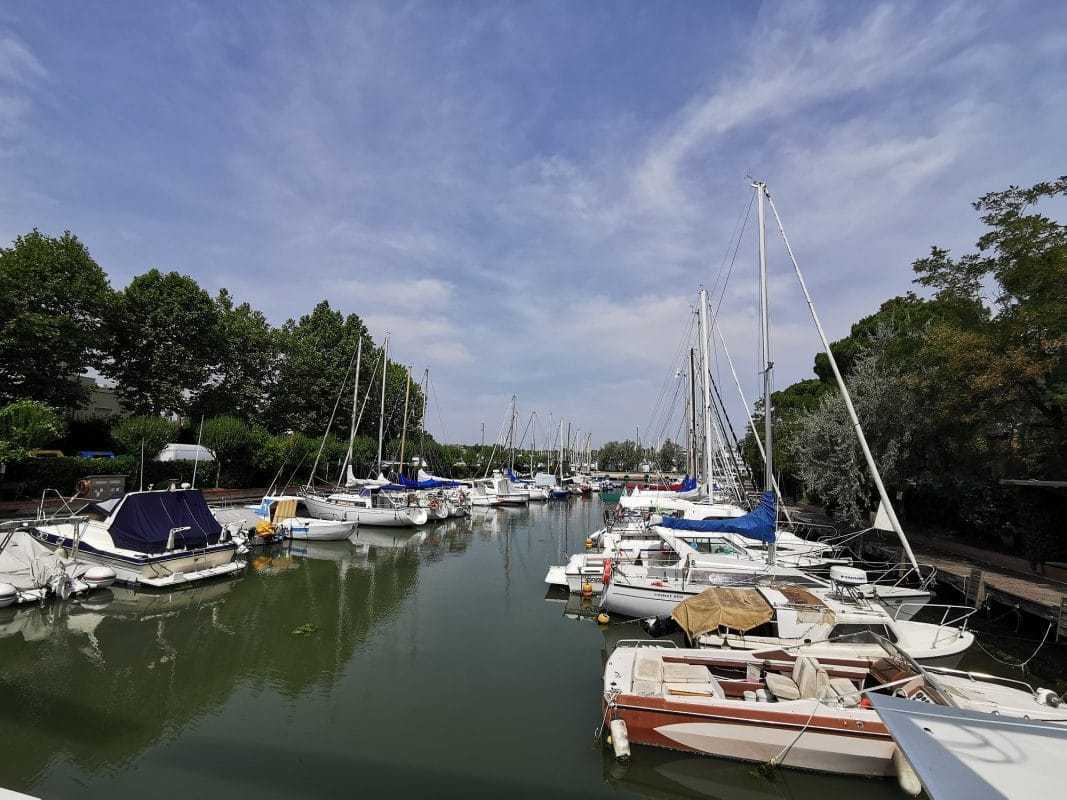 Garibaldi, who is already a respected historical hero by his role in the unification of Italy, is particularly popular in Cesenatico. Next door to the San Giacomo Temple stands a Garibaldi statue, which was among the first in the country erected as a Garibaldi’s heroic monument. 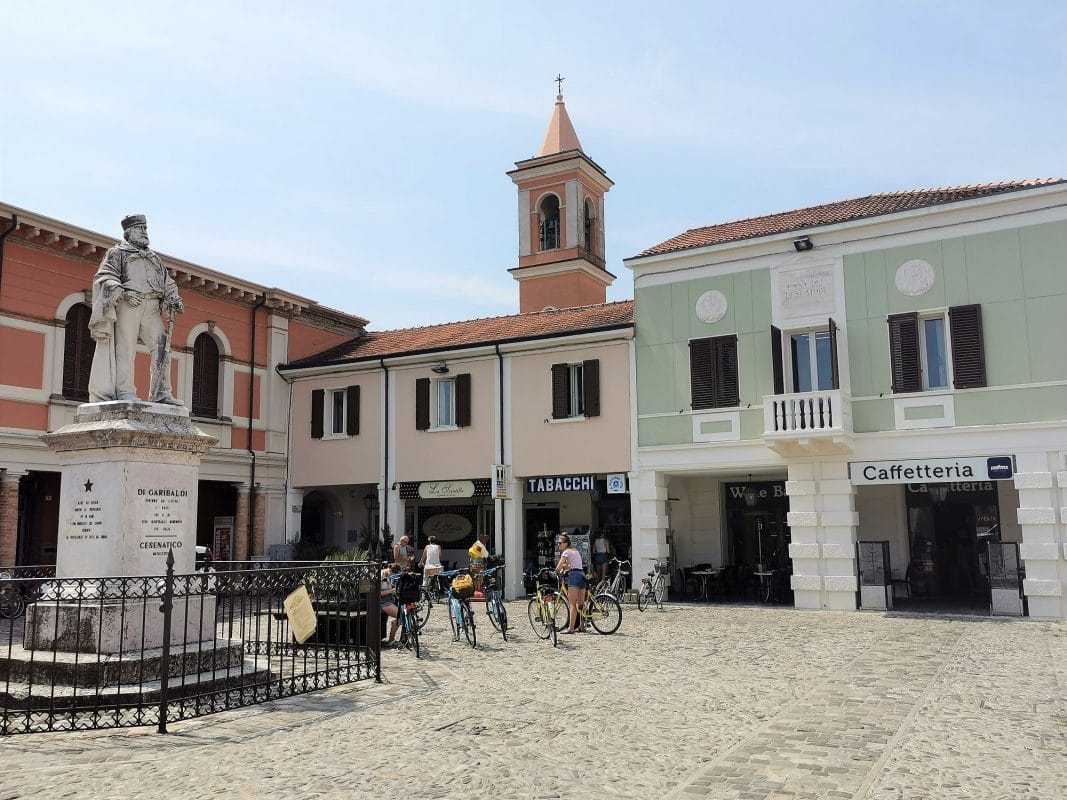 In addition, a Garibaldi boat ceremony is held in Cesenatico on the first weekend of August each year. During the festival, dozens of people wearing reds shirts re-play history in a form of extremely fun competition. The whole point of the task is who can climb to the top of the 14-meter-high mast the fastest. The challenge is that the mast is smeared with grease, resulting in continuous slip back. The other, less cheerful but spectacular part of the Garibaldi holiday series is when crowns are released into the water, paying tribute to the memory of people who lost their lives in a naval battle. 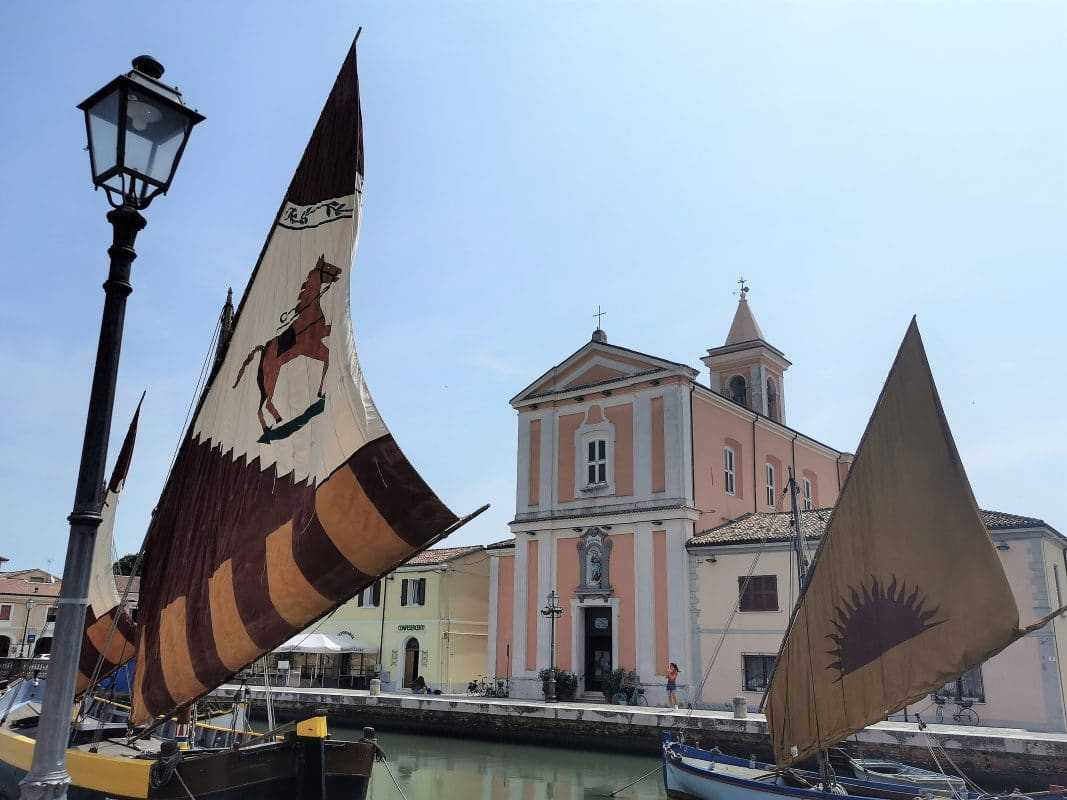 Cesenatico is an ideal destination for a short trip or even for a longer stay. On the slowly deepening sandy beach, there are many hotels with clean beaches, sun umbrellas and a flood of tourists, all the conditions for a relaxing holiday. Thanks to the GPS app and we got lost, first we arrived at the 5* Grand Hotel, which, with a price of €260 per night, is certainly not my place. 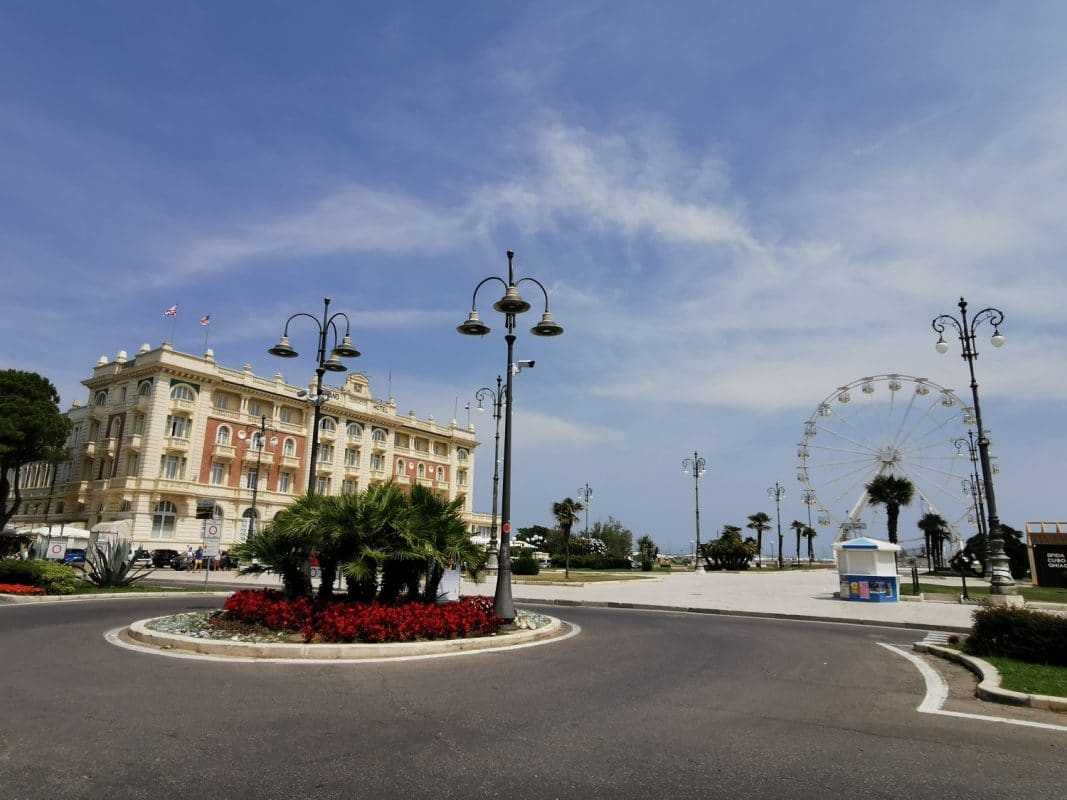 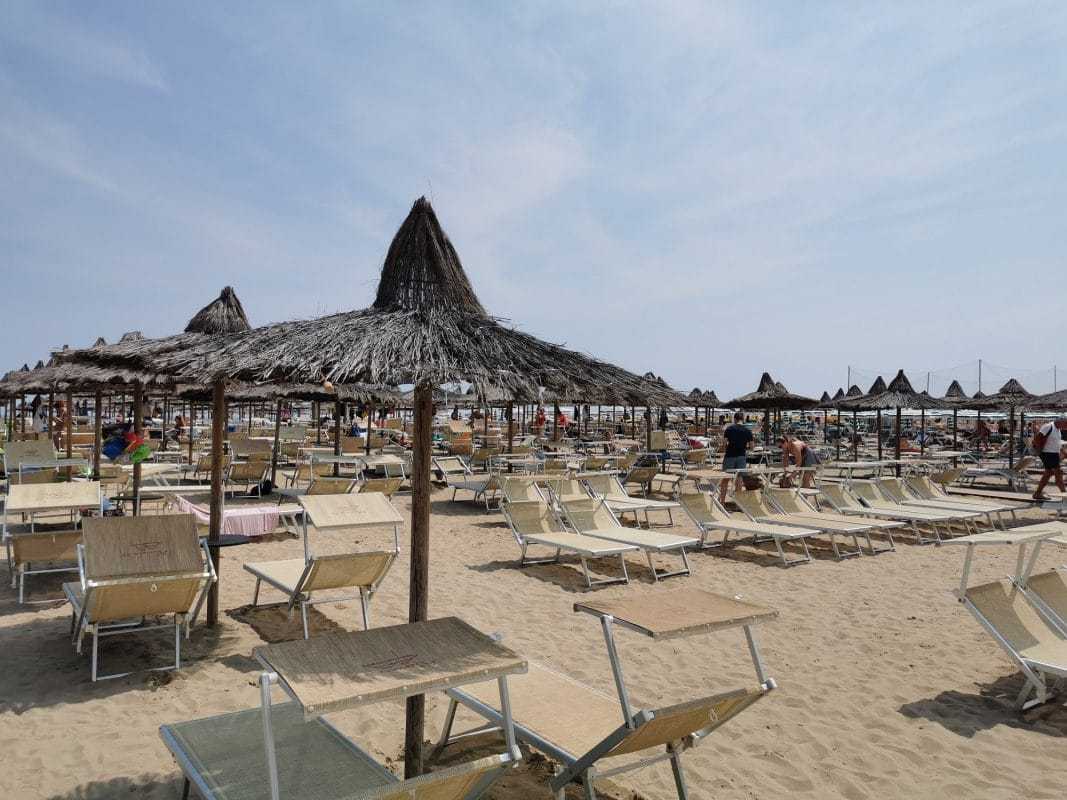 However, the luxury hotel is beautiful, which with its Ferris wheel next to it simultaneously modernizes and vintages piazza Andrea Costa. On Viale G. Carducci Avenue, which crosses the square, it is worth taking a walk in the shade of the large green citrus trees, where cozy cafés and bars touch each other, giving the promenade a true Mediterranean Riviera atmosphere. 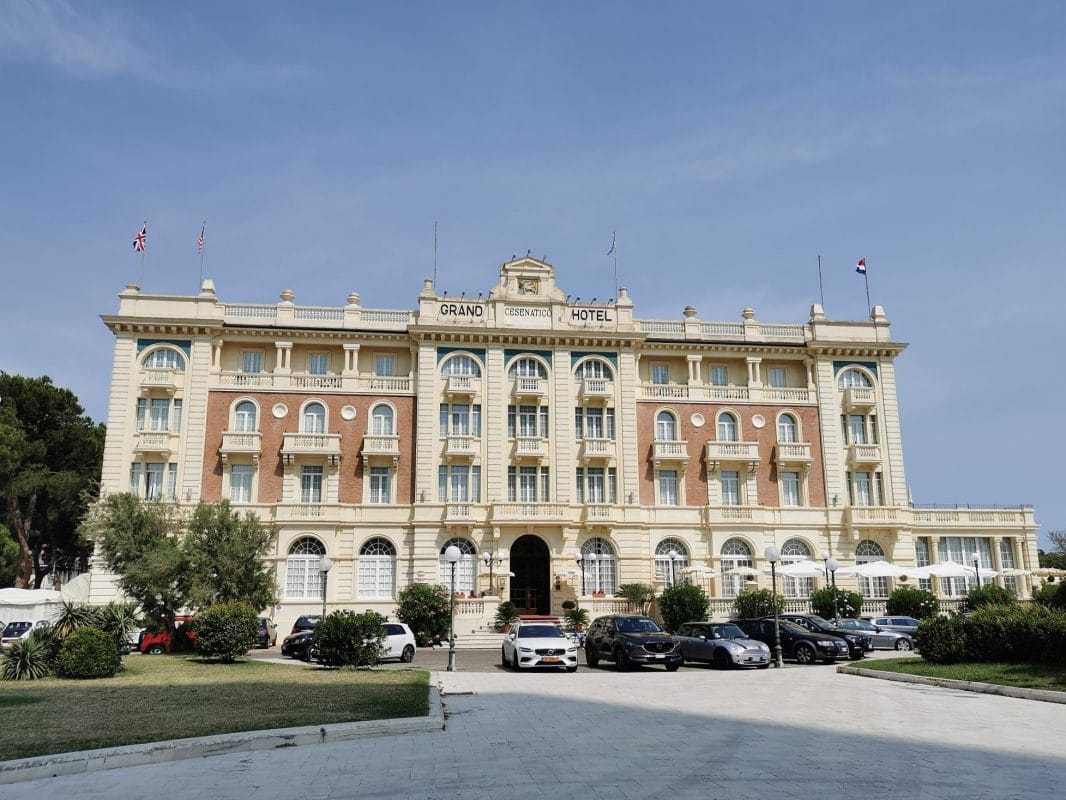 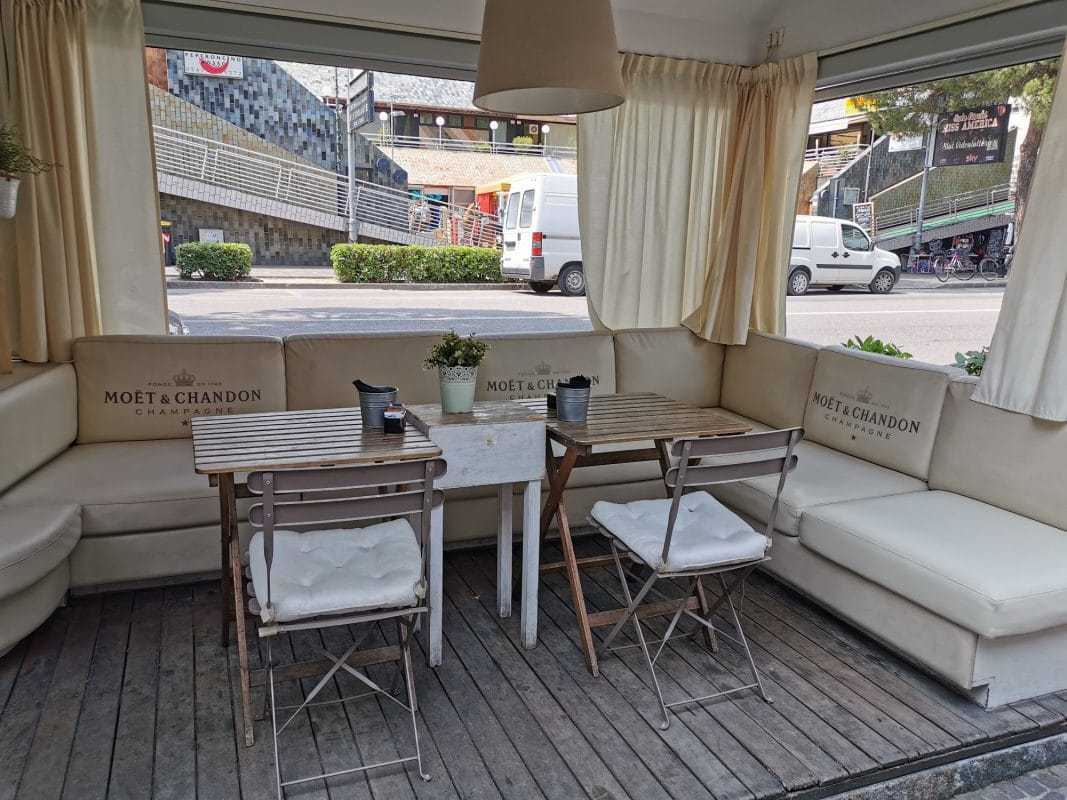 One of the most spectacular parts of Cesenatico is undoubtedly the Leonardo da Vinci-designed drainer, at the end of which colorful sailboats rock the surface of the seawater. Most of them are museum property, but you can also find private boats and speedboats here. 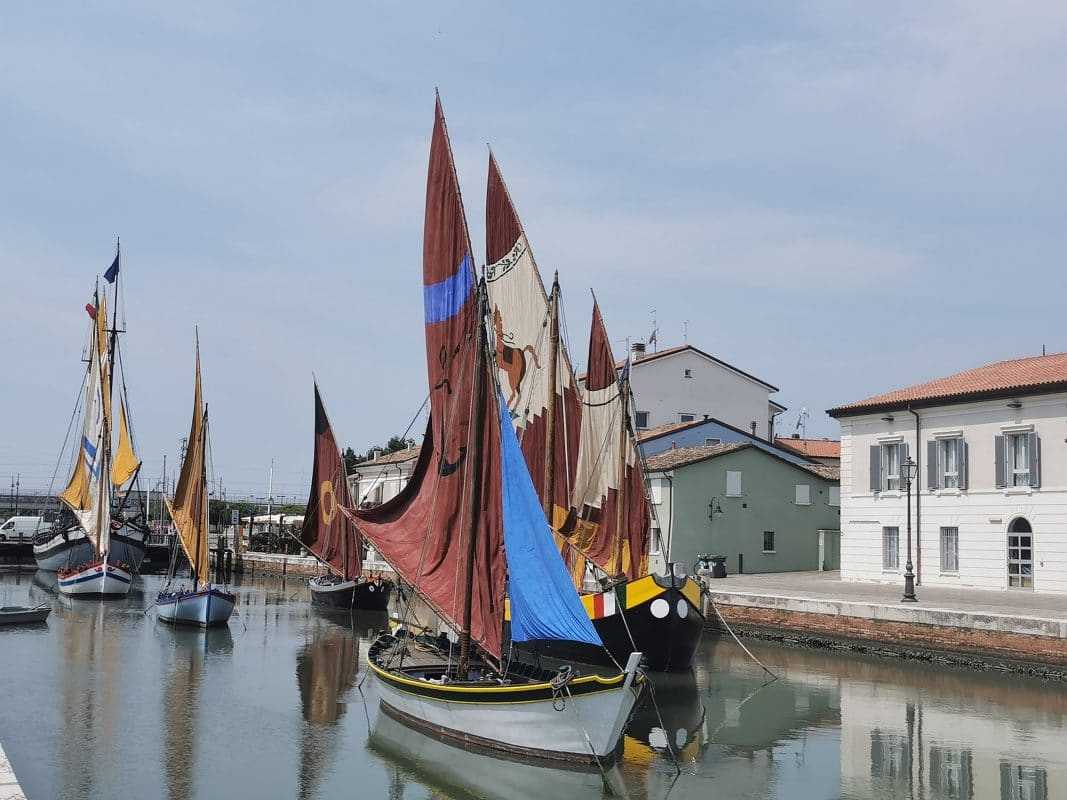 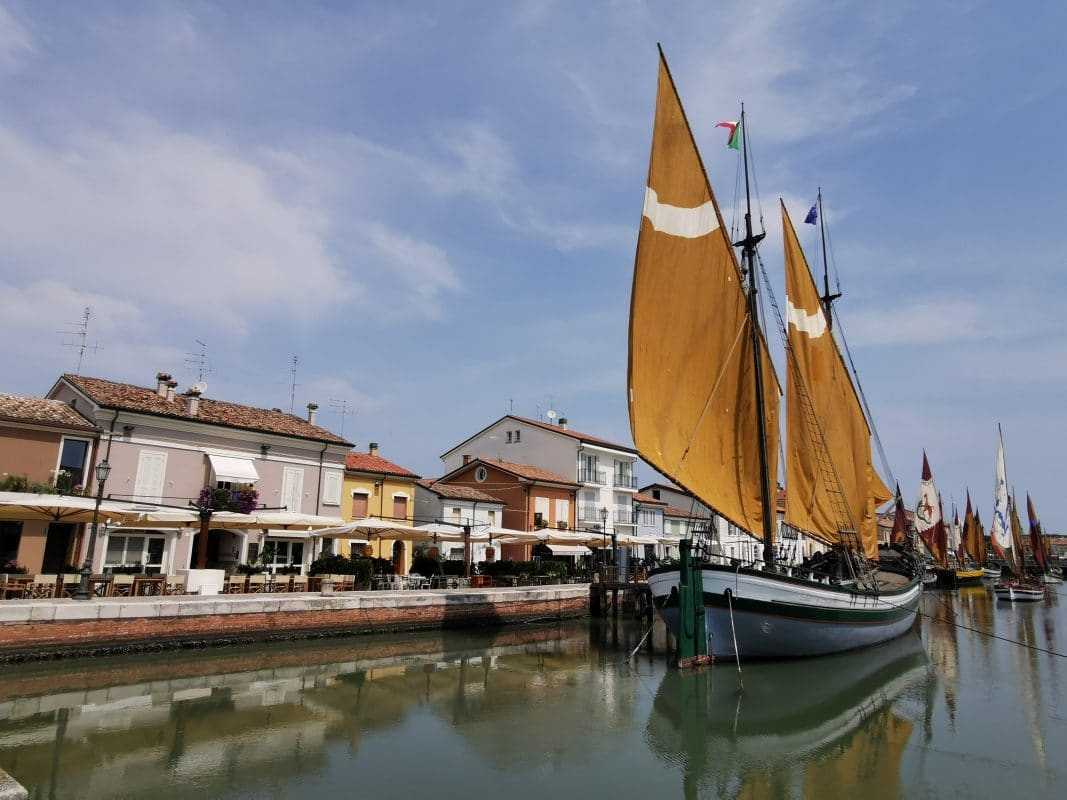 There is a land part of the maritime museum where, in addition to presenting the history of the development of fishing, two types of traditional Italian fishing boats, trabaccolo and bragozzo, are also exhibited. The colorful boats can be viewed on the canyon at all time of the year making a nice memory of the former fishing village, Cesenatico, which has retained its character to this day. 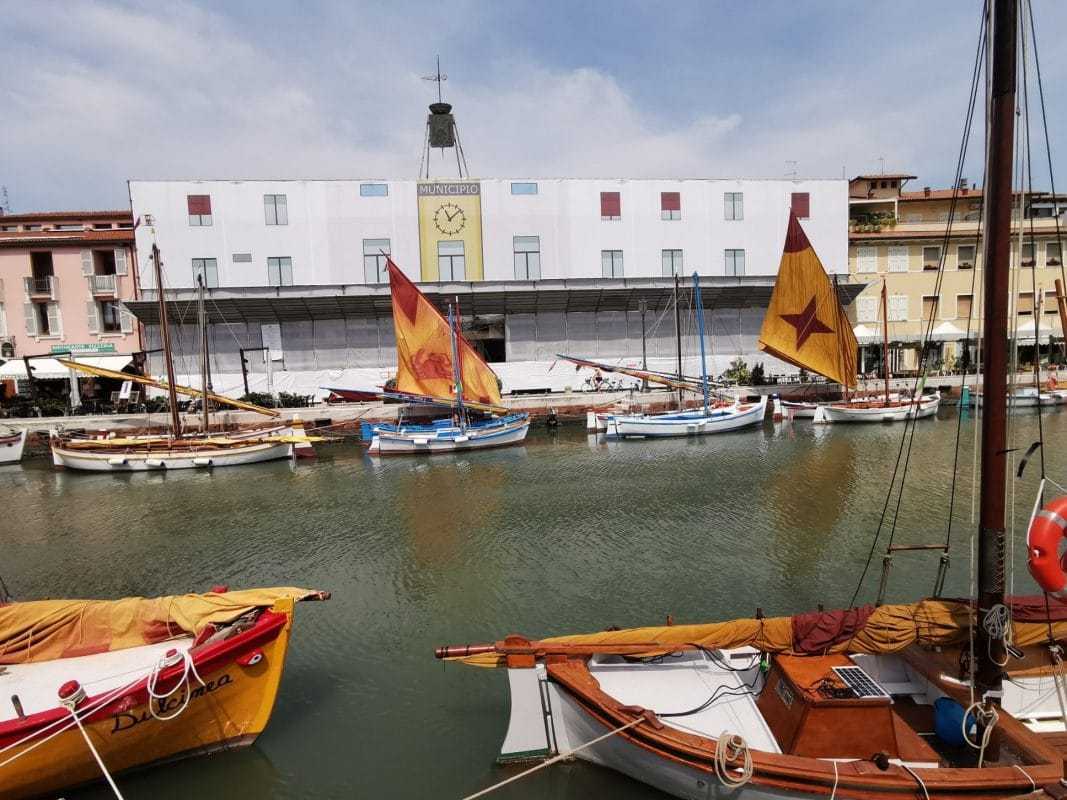 Speaking of fishing, Pescheria Comunale is definitely worth mentioning, which actually covers the fish market. Here you can buy fresh seafood every day, brought here by locals. In the past, when it was not possible to store the fish in the absence of a fridge and freezer, they were beaten into special brick wells in winter. A well-preserved brick well can still be found in Piazza delle Conserve.

By the way, fish have a feast in Cesenatico too, not just Garibaldi. Every year, themed fish days are held – this year it was the 19th time in May – when restaurants await visitors with special fish dishes and tastings typical of Emilia Romagna province.

If someone misses the fish festival, there’s no reason to be desperate. Restaurants next to the sea have as wide range of food as the colorful buildings on the edge of the coast. When you’re in Cesenatico, it’s a must-see program to break the walking on the banks of the canal with a gastronomic break in one of the terraced restaurants.

Gourmand taste lovers attention! In addition to the canal, there are three restaurants that are not starry but are recommended by Michelin (La Buca,  Osteria del Gran Fritto,  Osteria da Beppe). Unsurprisingly, they are all famous for their fish dishes,asCesenaticoLeonardo’s canal made the city truly a child of the sea and vice versa. 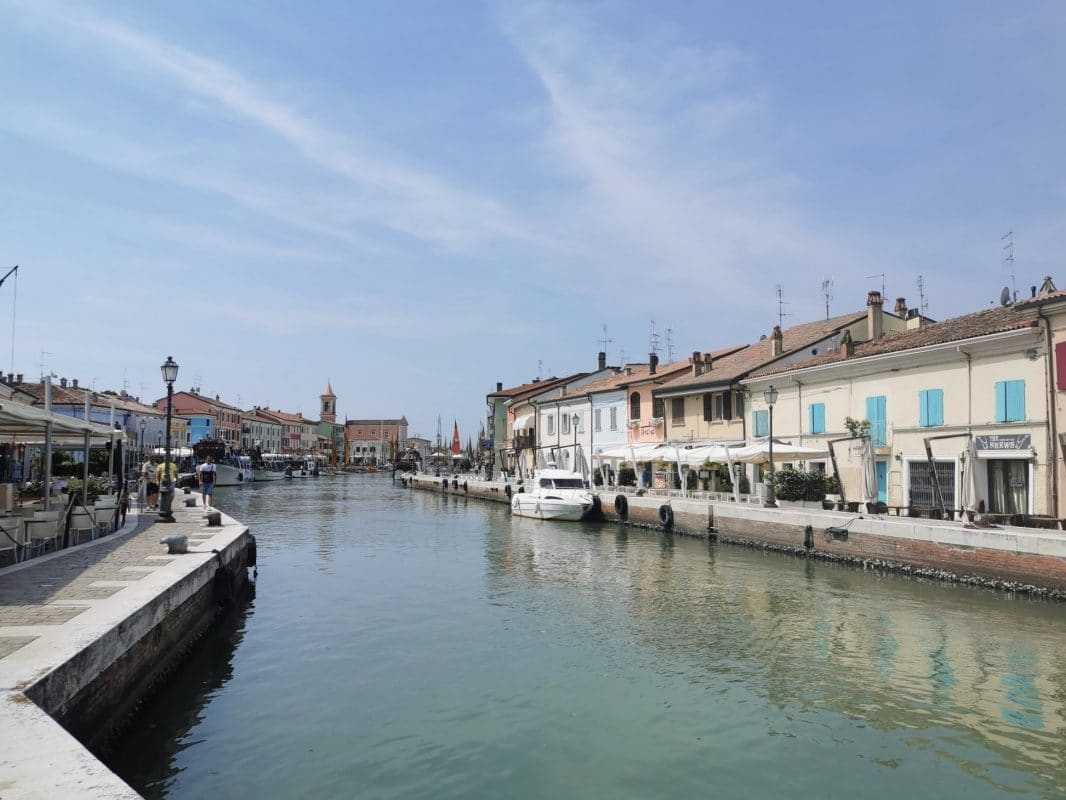