Békéscsaba, where money and sausage don’t grow on trees

When I visited Békéscsaba, for the first time in my life, all I knew was that the finest sausages of the country are being made here. And there’s a sausage festival here in every October, but that’s basically the picture I had in my head of the city. The visit, by the way, is due to a lucky coincidence. On Instagram (you can follow me here), I met Ida, who lives abroad, but her hometown is Békéscsaba. Years of online chatting the relationship turned into a personal friendship and she invited me to spend a few days at their house in the sausage capital of our country.

With this superficial knowledge that Békéscsaba = sausage, I arrived at the city’s railway station. Right on the first day, I realized how much more this town is about than sausages. First of all, it was more than interesting that everyone here rides a bicycle. Let’s just say it’s obvious because it’s a lowland city and it’s all flat terrain. But the whole territory of Békéscsaba is very well connected by bicycle routes, I would not have thought. So to explore the city, I can recommend the bike as a means of transport with a warm heart.

Let’s start right away with the Harruckern tour, which was dreamed up by Sándor Mácsai, President of the Cultural Heritage Club of Békéscsaba. During the tour, you can get acquainted with the historical traditions of the city. The name of János Harruckern inevitable in the life of Békéscsaba. The nobleman of Austrian descent received baron title in 1729 together with the name Harruckern. In 1729, he was appointed to lord-lieutenant of Békés County and was credited with the resettlement of the city after the Turks and freedom wars. He offered free religious practice for all the people, took back the church taxes, and donated it to settlers, which were extremely attractive to the newcomers.

In 1718, the first 20 Slovak families arrived here, and they were followed by German settlers. Under the direction of János Harruckern, high-level and livestock farming was introduced, which made the region Hungary’s pantry. Thanks to the wave of resettlement, 35-40% of the population of Békéscsaba is Slovak nationalities today, and far from the border, there is a flourishing Slovak culture in the city.

The first stop of the Harruckern tour is the Molnárház, the oldest residential house in the city, built before 1810. The cottage, made by roofing technique, has three rooms equipped with contemporary furnishing. The cleanroom, the atrium, and the living room reminded me of my great-grandparents’ house and brought me pleasant childhood memories. Another interesting feature of Molnárház is the low front door. Its size is symbolic, as entrants used to have to bow their heads when entering the house as respect for the host.

One of my favorite places in Békéscsaba was the Fairy Tale House, which opened in 1988 based on the dreams of Mihály Schéner, Kossuth Prize-winning artist. The special building with white columns is also referred to as podsztenyás house because of the Slovak architectural style. Inside, in addition to old childhood toys, Mihály Schéner’s special gingerbread-like creations are wrapped in age-old robes.

The Fairy Tale House, with its two interrelated farmhouses, is a unique cultural space in the city. Children can enjoy traditional activities (e.g. claying, weaving, making corn husk toys), while the spacious courtyard serves as a venue for outdoor concerts. In the interpretation of Tamás Pálinkás, it was a great experience to get to know the Fairy Tale House and become a child again for a few hours.

You can meet the traditions and heritage of the Slovak population, who has been living in the city since the 18th century, in this nice country house, near the Evangelical church. The residential building was built around the 1810s and now it’s under since 1972. In the interpretation of Attila Lészkó, the elements of Slovak folk culture come to life beautifully inside the farmhouse. The painted furniture, the antique prayer book, and the tinkling bed are special features of the exhibition and folklore traditions.

The Harruckern tour ends at the 120-year-old Old House, which stands under the shady trees next to the Evangelical church. In addition to Csaba sausage tasting in the well-furnished mini farmhouse, the legend of Csaba also comes to life with help of music. The ballad was made for the anniversary of the city’s 300th resettlement by the initiative of the Cultural Heritage Club of Békéscsaba and tells you the story of the city.

Békéscsaba’s logo features two church towers, which are the defining elements of the cityscape. The second-largest Evangelical church in Europe is located in Békéscsaba and can accommodate up to 3,000 people. When I was there, they were practicing on the organ and the sounds that were coming out already laid the foundation for the atmosphere of the visit. The interior of the Evangelical church, by the way, is a miracle: the snow-white pillars embrace the vast square cleanly and elegantly. Interestingly, the Evangelical church does not have a bell. The original 3,600 kg bell was destroyed in World War I and has not been replaced since. Therefore, if there is a mass, the bells of the nearby Lutheran small church are usually used.

The city’s other iconic religious building is the two-tower Catholic Church, in which red bricks provide an even more stunning view at sunset. The Neo-gothic church’s predecessor was originally a one-tower building and the version is shown today was consecrated in 1910.  It is worth looking at the interior of the Catholic church at close-up. The crossroads made of terracotta are an award-winning work of the church, but the confessional and benches are also unique sights. 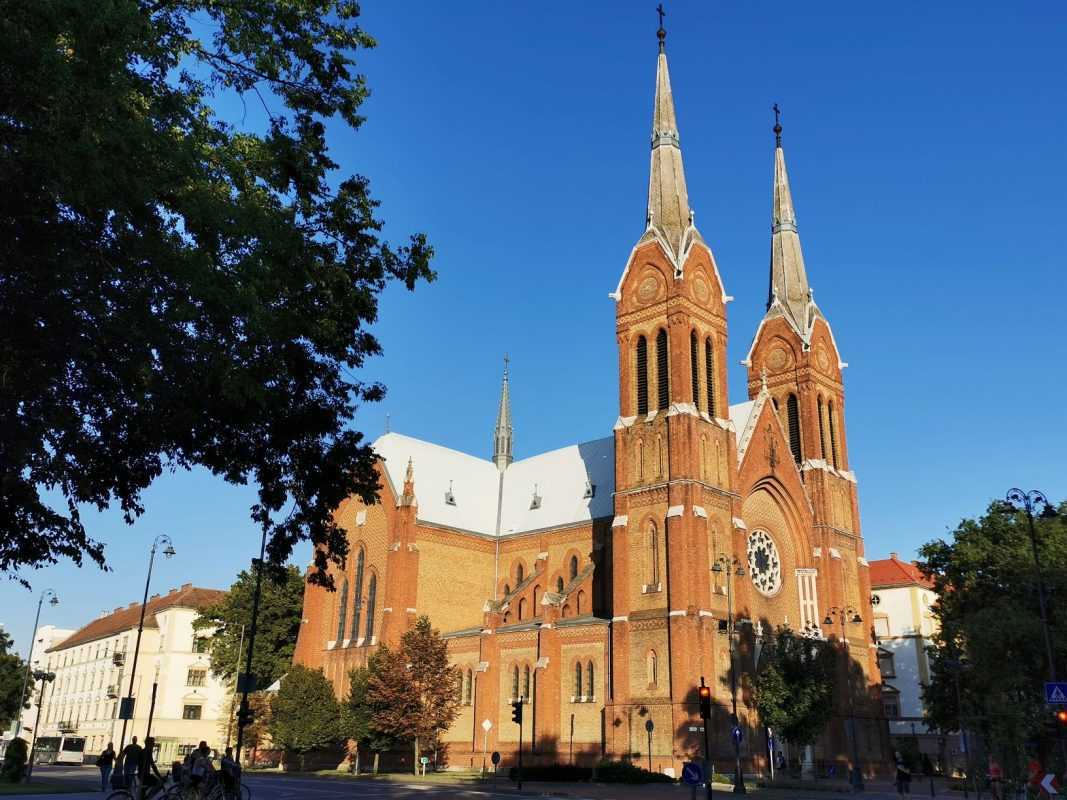 Békéscsaba and the sausage

Since I’ve been to Békéscsaba, that everyone reminds me of sausages first, of course, I had to try out how to make it. Organized by Csaba Sausage Club, under the professional guidance of Gyula Lugosi and Pál Szeles, I learned what the secret of Csaba sausage lies in.  In addition to meat, it is flavored only with four spices, such as salt, garlic, red pepper (sweet and/or strong), and cumin. There’s no pepper in it, as opposed to the sausage of Gyula, that’s its specialty. Together with the children, I did a successful exam in sausage making and the result of the day we happily ate our freshly made and fried sausages.

If you want a sausage experience and a place where the fence is really made of sausage, head to the Giants’ Kitchen. The playground in CsabaPark is a big favorite of the little ones, where children can get closer to the traditions in a playful form. In addition to the sausage museum, there is a meat shop, restaurant, brandy, and wine museum in CsabaPark. For me, the best part of the park was the lake, even though I’m a close-to-nature girl. On the sun deck, it was good to relax a little after all-day cycling. However, there was no time for a long rest, as there was still plenty of sights to explore in the city.

Mihály Munkácsy spent his childhood and part of his young adult life in Békéscsaba and organized a studio in the city. Two institutions in the city bear his name and commemorate Munkácsy’s heritage. One is the Munkácsy Museum, which is a beautiful, snow-white neoclassical building and has been named after the famous painter in 1951. The aim of the museum is to explore and publicize the cultural values, especially the legacy of Mihály Munkácsy and the traditions of Hungarians and nationalities living in the county, which are linked to Békésbaba.

The permanent exhibition of the museum is closed now due to a transformation like the Mihály Munkácsy Memorial House. In the 8-room mansion, you can get acquainted with the painter’s life with documents, studies, and sketches. I’m a little bit disappointed that I couldn’t see any of the institutions because of the renovations, but I hope it will happen someday.

Built-in 1824, the small peasant farm and its buildings commemorate traditional peasant traditions. With a symbolic entrance, you can get an insight into the history of farming and grain production in the region on the nicely renovated Gadács farm, or you can visit the windmill that has been moved from the Csókás-puszta. As a countryside girl, places that preserve traditions are always close to my heart. I was happy to discover among the exhibits tools that I last saw as a child. 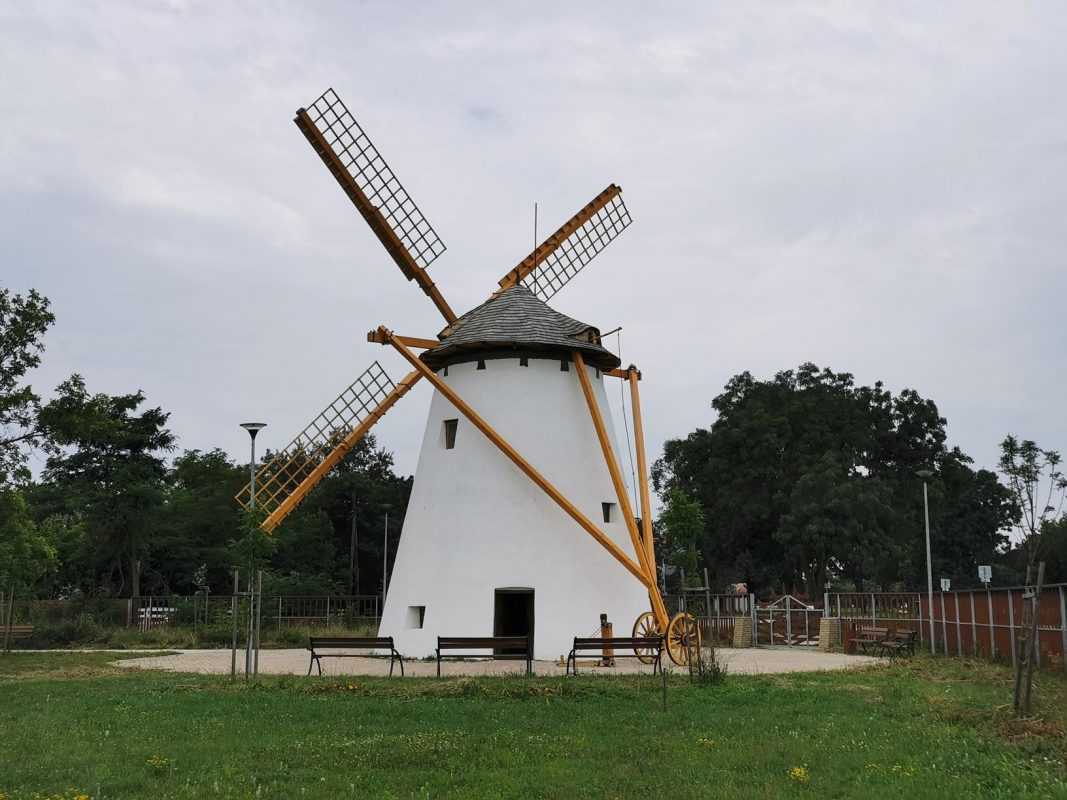 When you’re in Békéscsaba, you run into the water at almost every corner. Whether it’s the city’s popular Árpád Bath, the lively water canal with ducks on their shores, or the cooling fountains in pedestrian streets. As I referred to in the introduction, I was surprised how sustainable Békéscsaba is from an infrastructure and environmental point of view. This opinion was only strengthened when I went downtown and expanded my knowledge thanks to the few days I spent here. So feel free to visit Békéscsaba, because the city it’s not just about sausages. 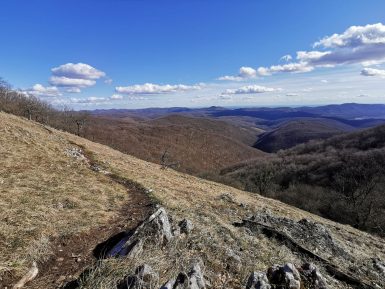 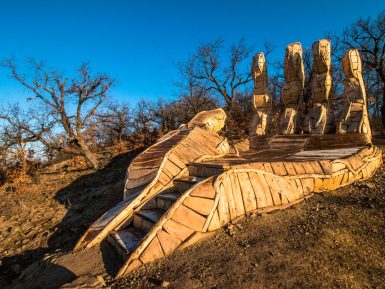