Winter wonderland in Hallstatt: seven things you must see there

Hallstatt has long been on my imaginary bucket list. With its postcard-like places and snow-covered mountain peaks, it has become a popular place for hikers for a reason. Maybe a way too much because thanks to the pictures shared on social media, the interest in the village has increased ten times in recent years. That’s why I was afraid of visiting Hallstatt as I hate tearing up serial numbers to take a photo of a certain place. The weather, however, solved my dilemma. While we had winter last year and I took pictures like this (click here), this year we had no snow.

At the end of February, for a weekend, I escaped to Hallstatt to at least have a feeling of winter. Although a lot of snow was no longer here either and the first buds of spring appeared on the trees, luckily I managed to get a taste of the winter wonderland of Hallstatt. 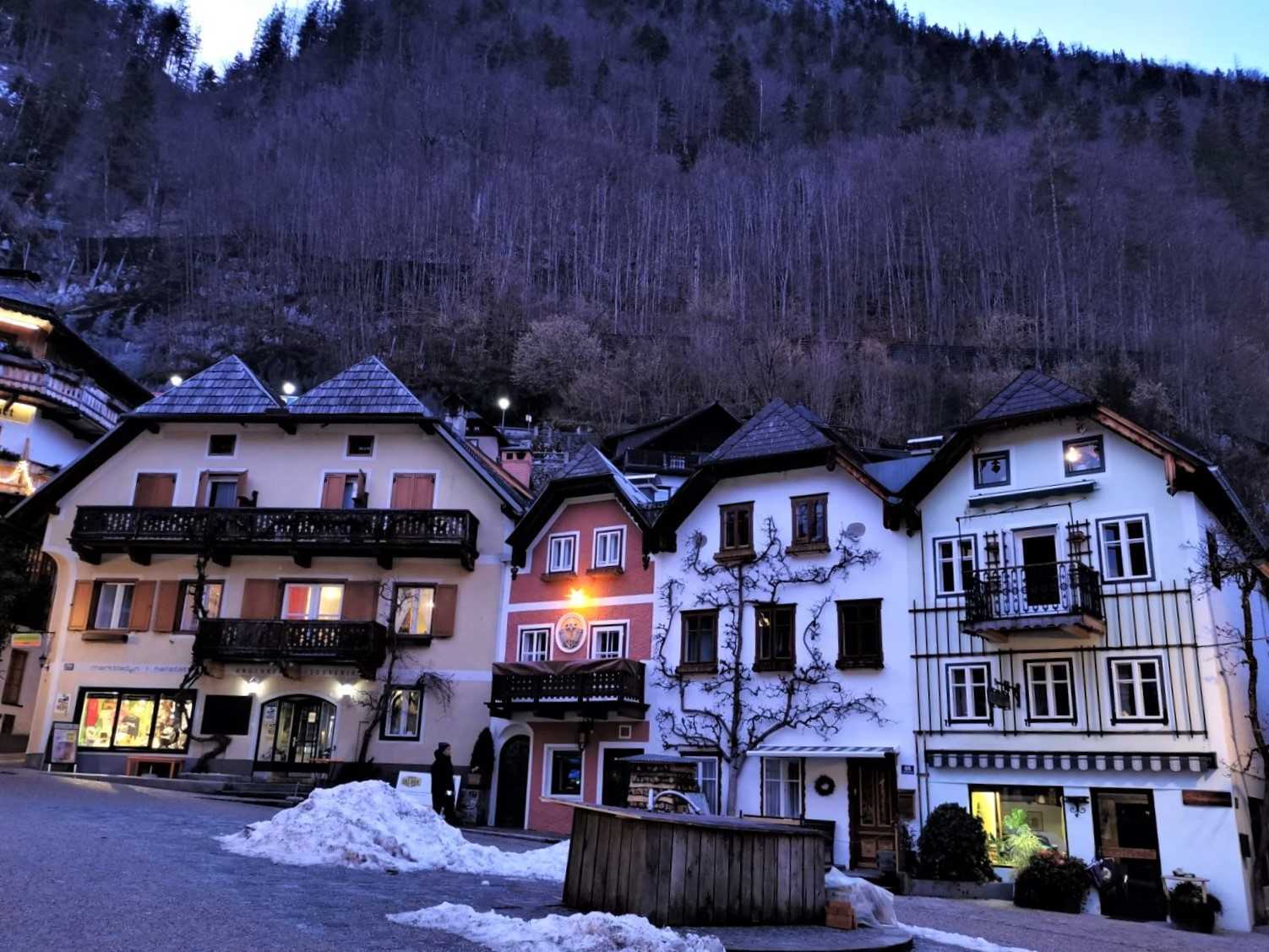 Many people only spend a few hours in the UNESCO World Heritage protected village to take the “mandatory” pictures and go on. I went further and enjoyed the unadulterated atmosphere of the Austrian small village for a weekend. What you can do in Hallstatt with a population of 800 people for two days, I’m telling you in this blog post. 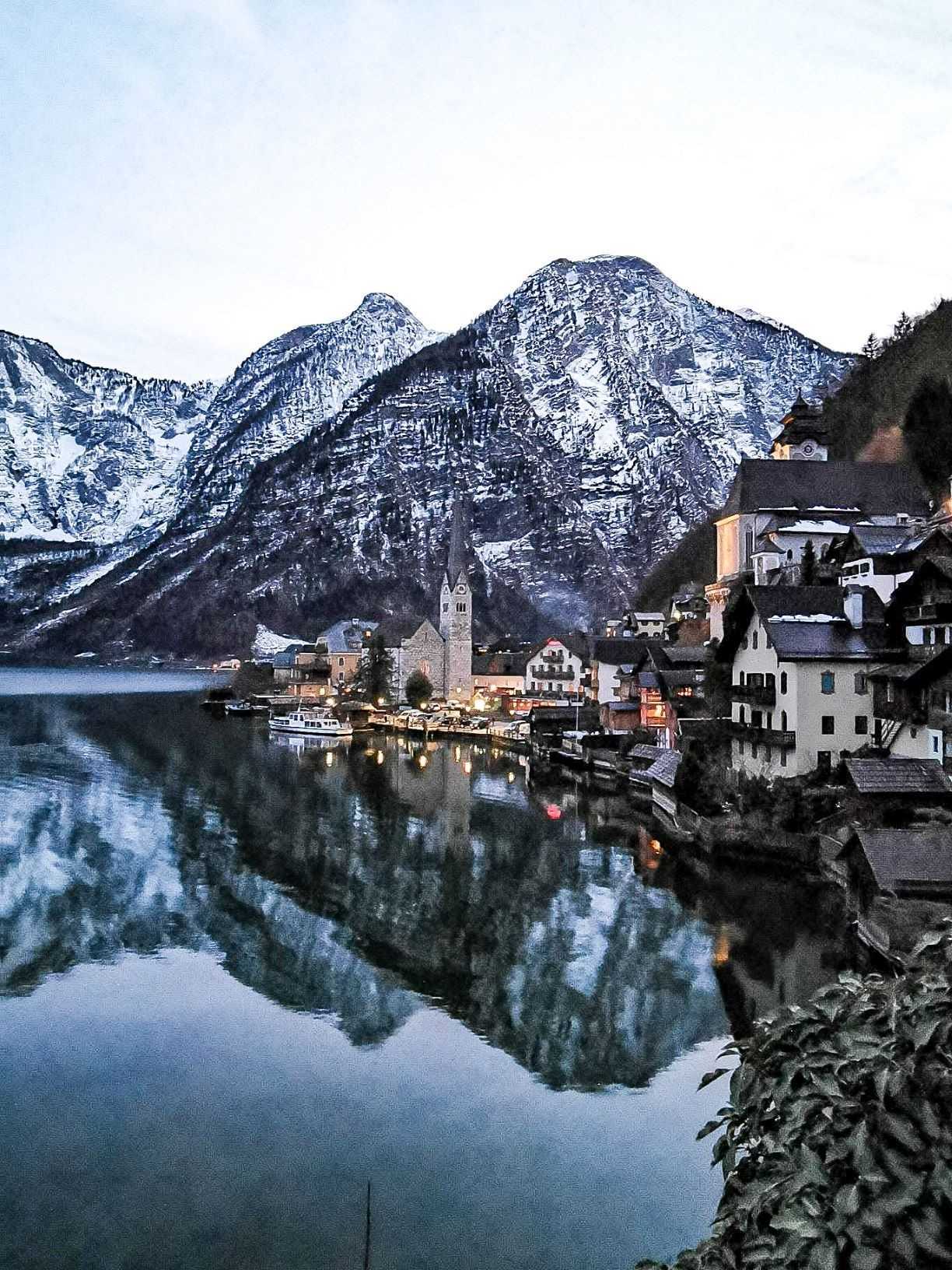 Visit the world’s oldest salt mine

I pay a special tribute to the Wieliczka mine, especially when it comes to salt (read more about the Polish mine here). Although I knew there are many salt mines around Hallstatt, but it remained hidden from me until the day of the visit that it is actually the oldest salt mine in the world. The fact a mine is at an altitude of 928 meters is an interesting fact in itself. I always thought mines are beneath the ground, not up at the top of the mountain. After a short lift and walk, we found ourselves at the entrance of the 7000-year-old salt mine, where the 90-minute guided program started. 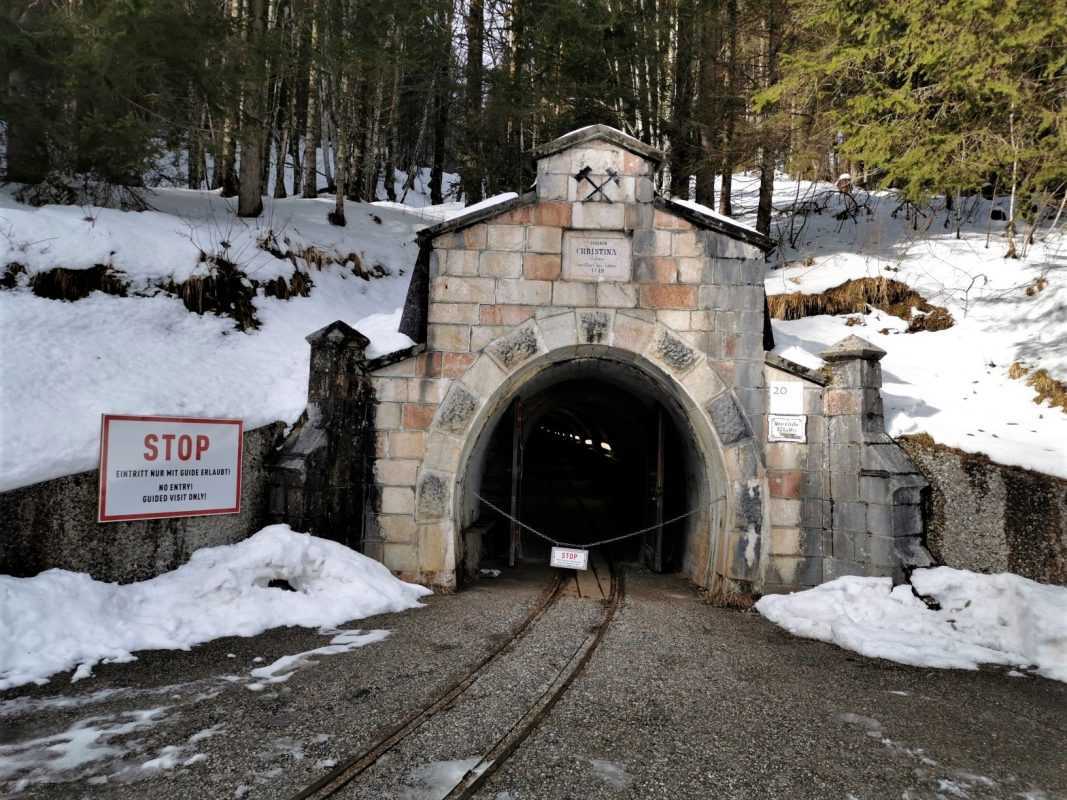 Thanks to the constant winter-summer temperature of 8 degrees and high humidity, the climate is very pleasant behind the harsh rock walls. No wonder our ancestors not only mined the salt, but many of them lived here with their families. It was one of the highlights of the tour when we went from one level to the other on the 64-meter-long slide, all in special jumpsuits. The mine is a must-see program, as well as the purchase of a salt product, which you stumble into every step of the walking through Hallstatt shops. 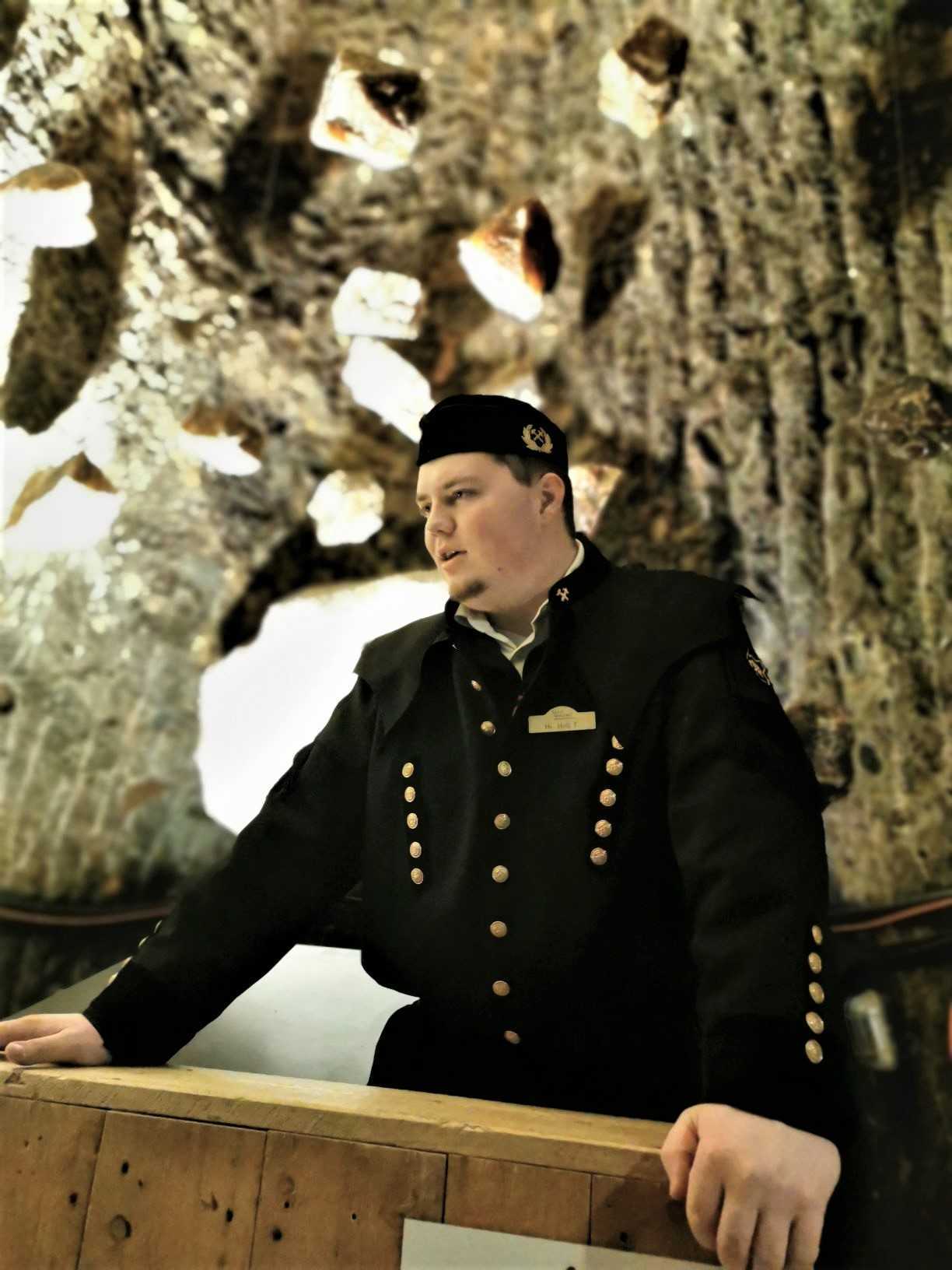 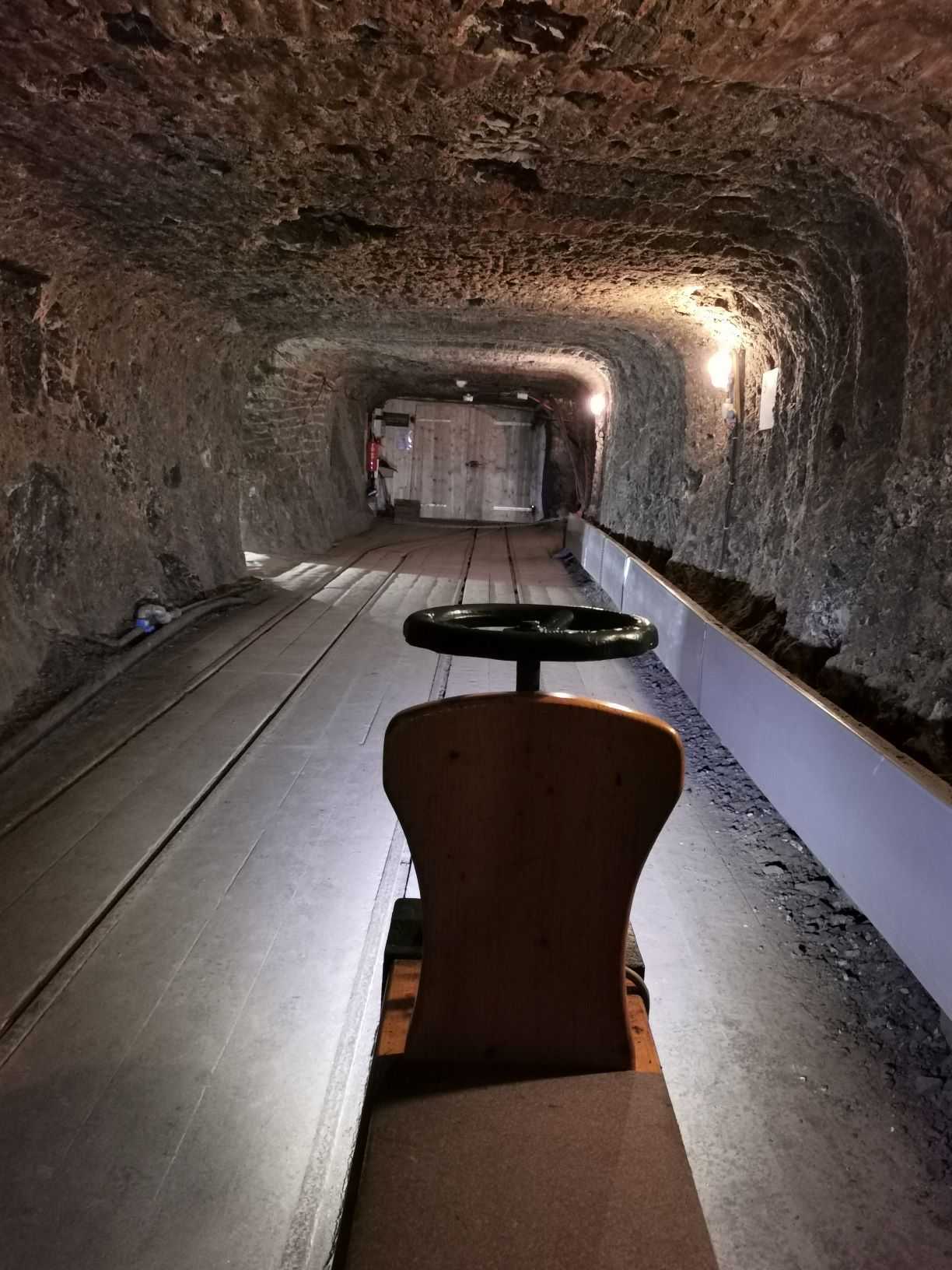 If you walk out of the salt mine, let’s go for a delicious coffee or cake at the Rudolfsturm. The tower, which roots go back to the 13th-century, once had a protective function and was in use until 1954. This is where the manager who overseed the salt extraction once lived, and today there is a restaurant between the walls of the tower. Its terrace is tempting for hikers in the sparkling winter sun, and you couldn’t have stayed out as a program to eat an apple pie (Appfelstrudl) poured with vanilla sauce. 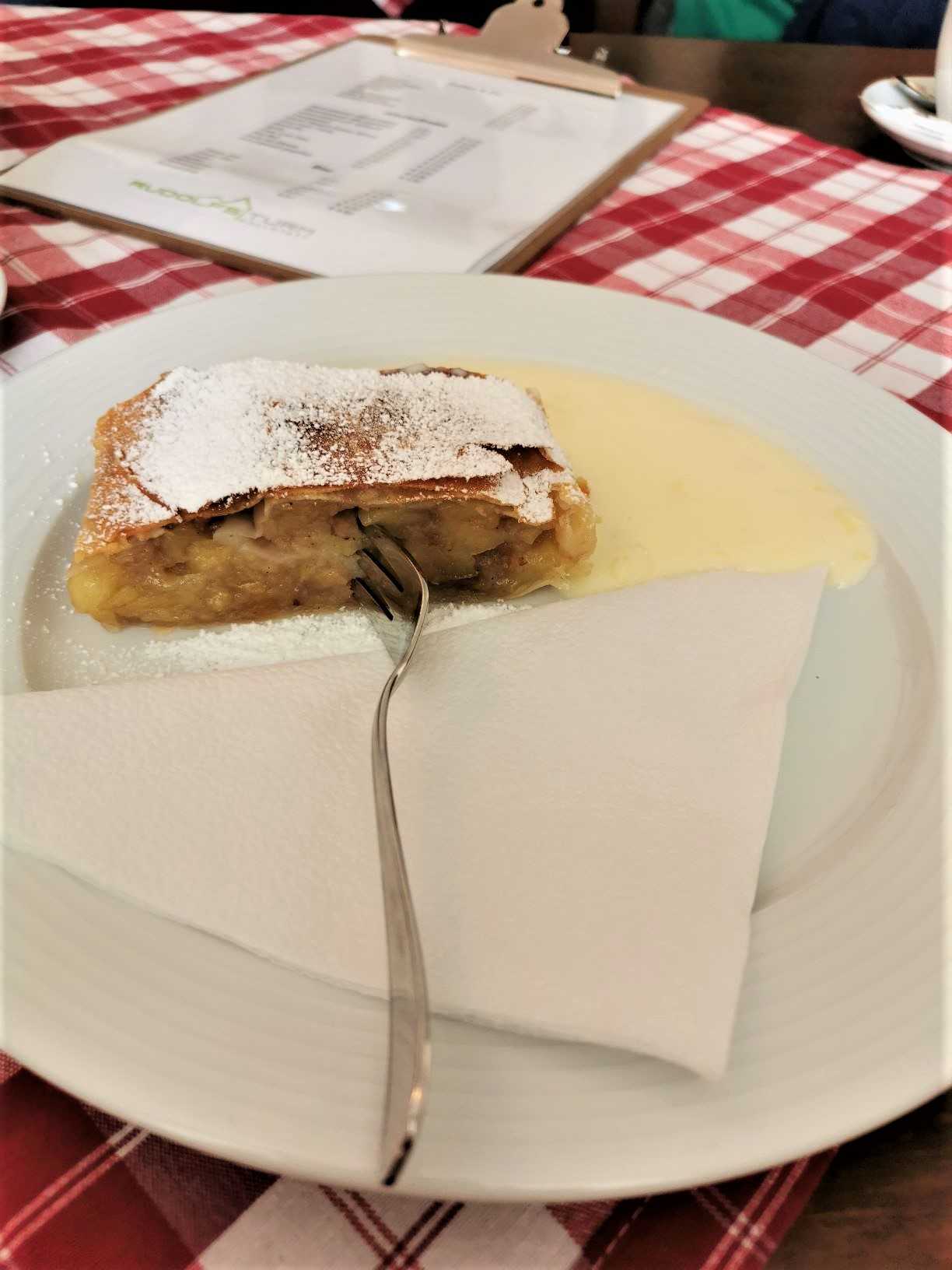 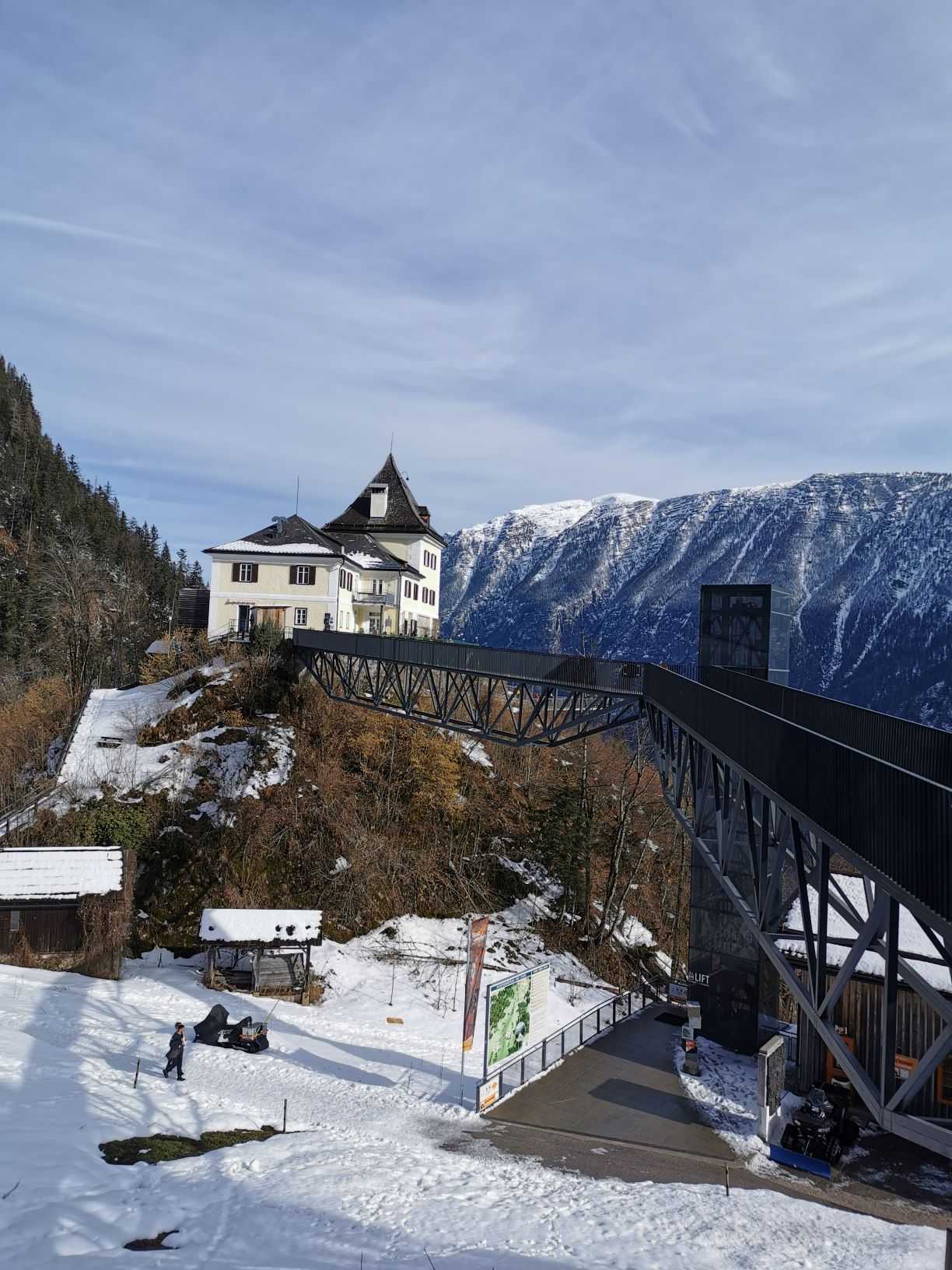 Have a world heritage view from the panoramic terrace

Hallstatt’s main attraction is undoubtedly the stunning village image, which is further topped by the sight of a lake wedged in the high mountains. If you want to see something beautiful, be sure to walk to the panoramic terrace, from where you can admire the panorama over the lake. Fortunately, there were few tourists early in the morning and no one bothered us to take at least 50 photos of the lake Hallstatt and the snowy mountains.

Find waterfalls and walk in the glacier garden

Hiking in the Hallstatt forest is a less photogenic but all the more refreshing program. Especially in winter, when the air is so fresh that you can almost bite and the moss peeking out from under the snow forms a nice contrast with the white landscape. We walked more than two hours from the center of the village to the glacier garden formed in the Ice Age, where the water carved strange outs into the hard rock, transforming them into a pool. The attraction, discovered only in 1926, is now under natural protection. 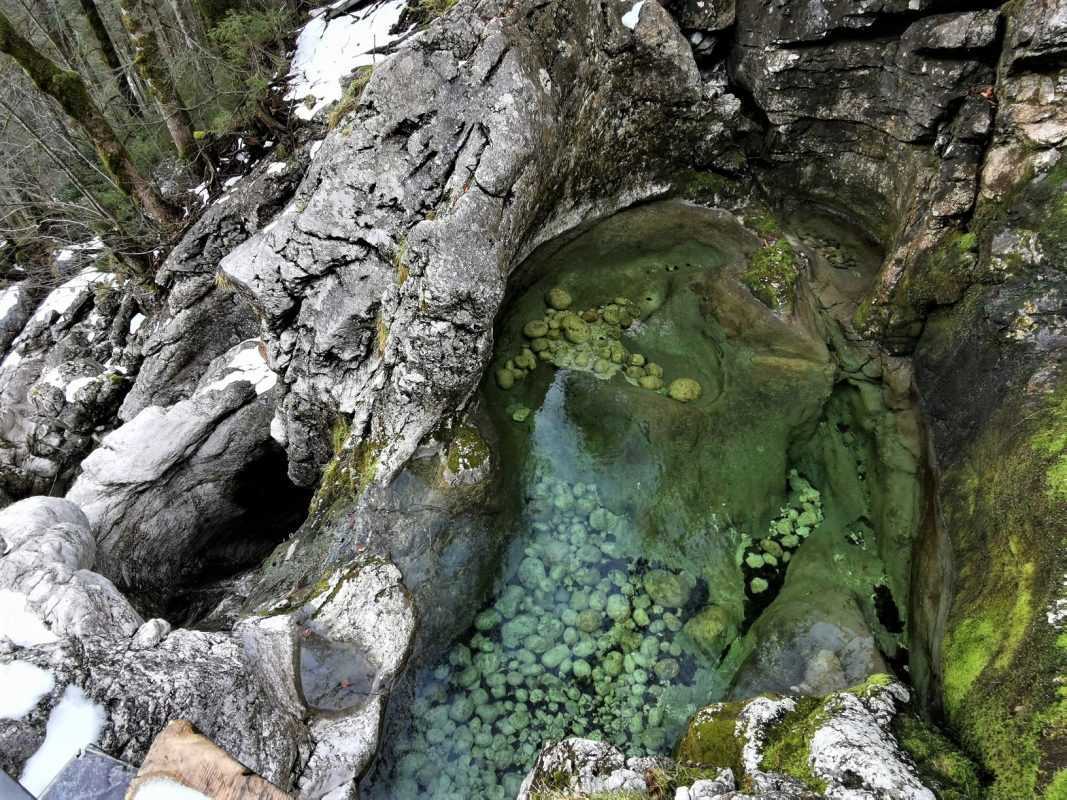 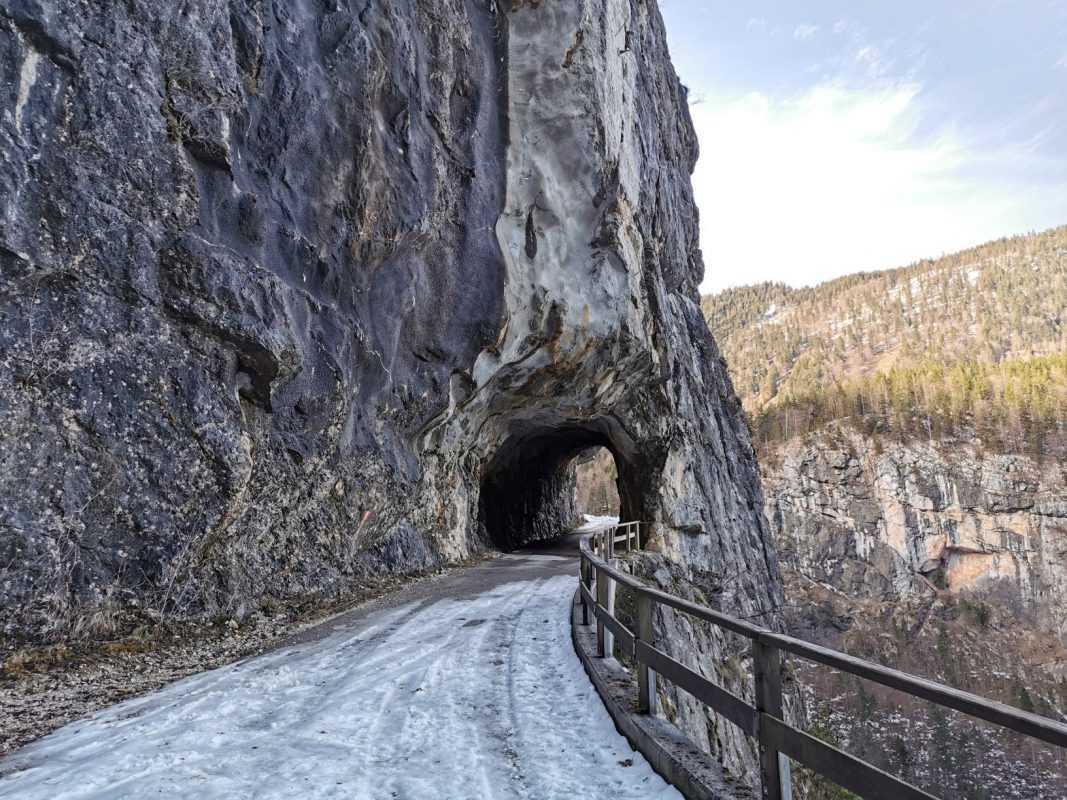 The hiking trails and information boards in Hallstatt are quite incomplete, which surprised me. We wanted to get to Waldbachstrub Waterfall, which we couldn’t find anywhere. After 1.5 hours of walking, we finally resorted to Google navigation for help, which took us to the waterfall, but because of the winter road conditions, we saw it better not to go down to the bottom. 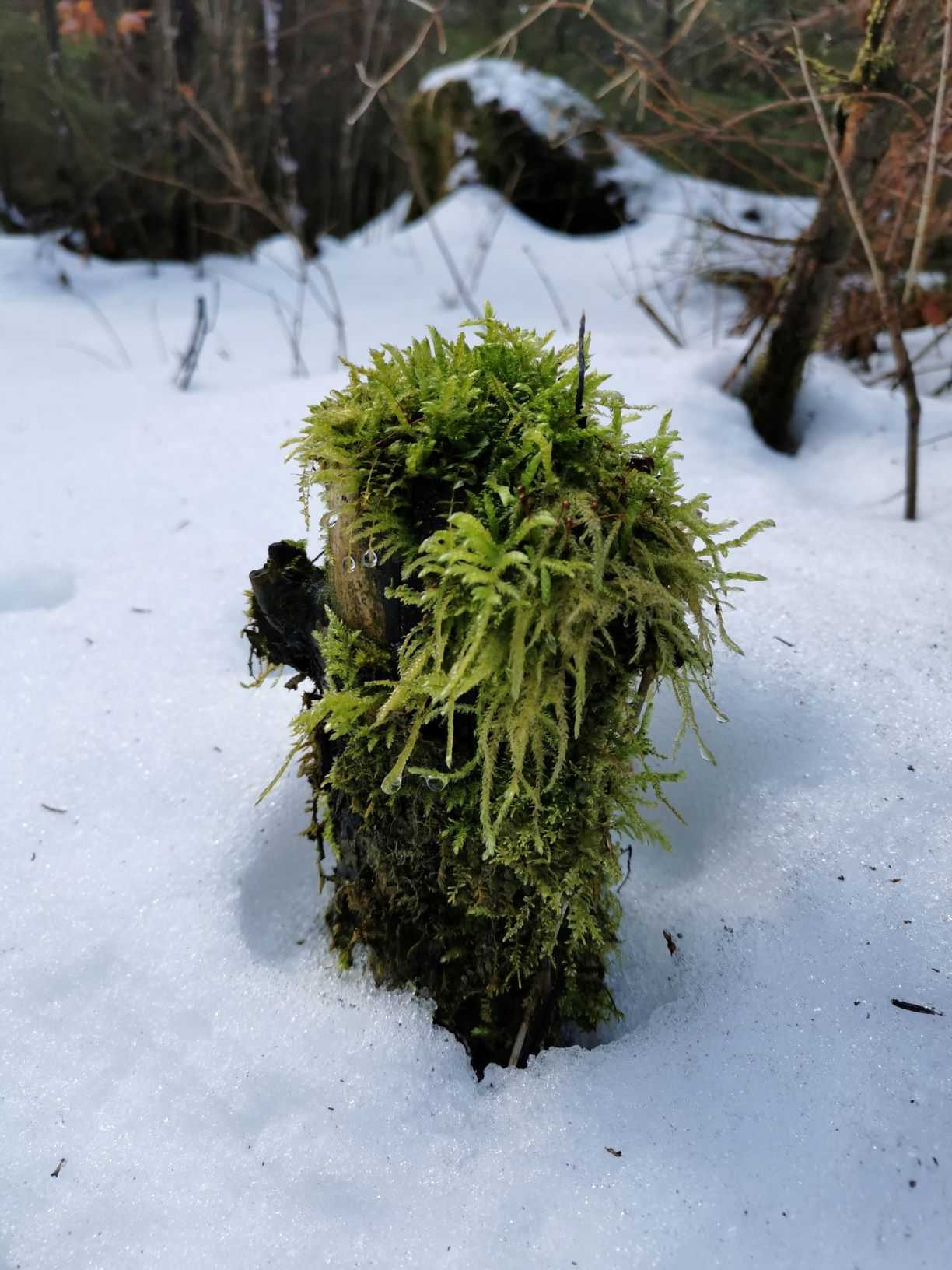 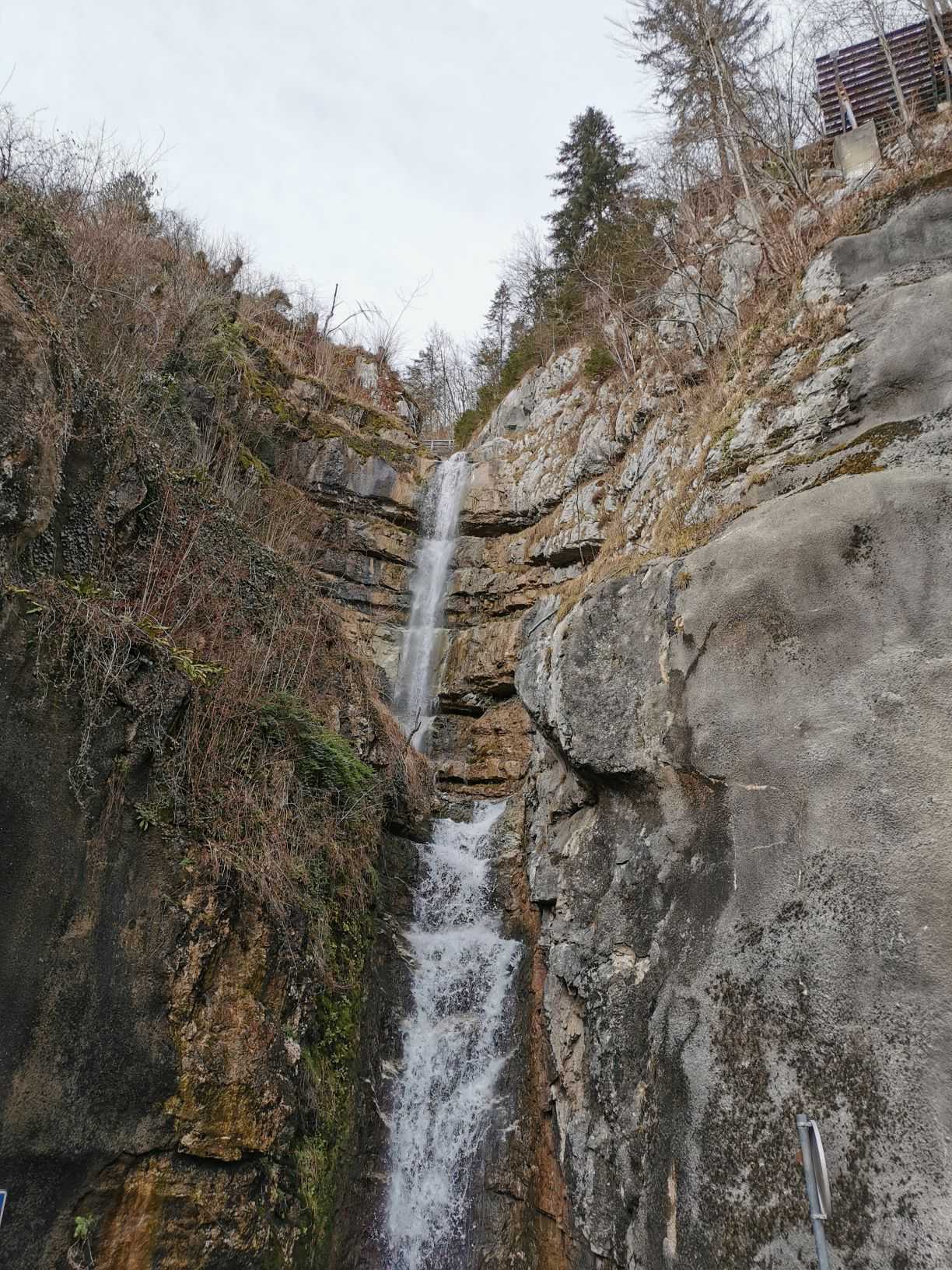 Unfortunately, we were not able to visit this attraction due to the lack of opening hours, but it is definitely worth mentioning in the Hallstatt blog post. From the 18th century onwards, a strange burial tradition spread among the mountain people. Cemeteries were full and some of the graves had to be recycled. The skulls in the old coffins were moved to a crypt as part of a second funeral service, which over time filled the entire space. In order to distinguish between family relationships and kinship, the tops of the skulls were painted with names, initials, and later different motifs. There’s never been a case of this before to decorate skulls like this. St. Michael’s Chapel contains nearly 600 painted skulls from the 18th and 20th centuries, which makes it one of the largest and most extraordinary “collections” in the world. 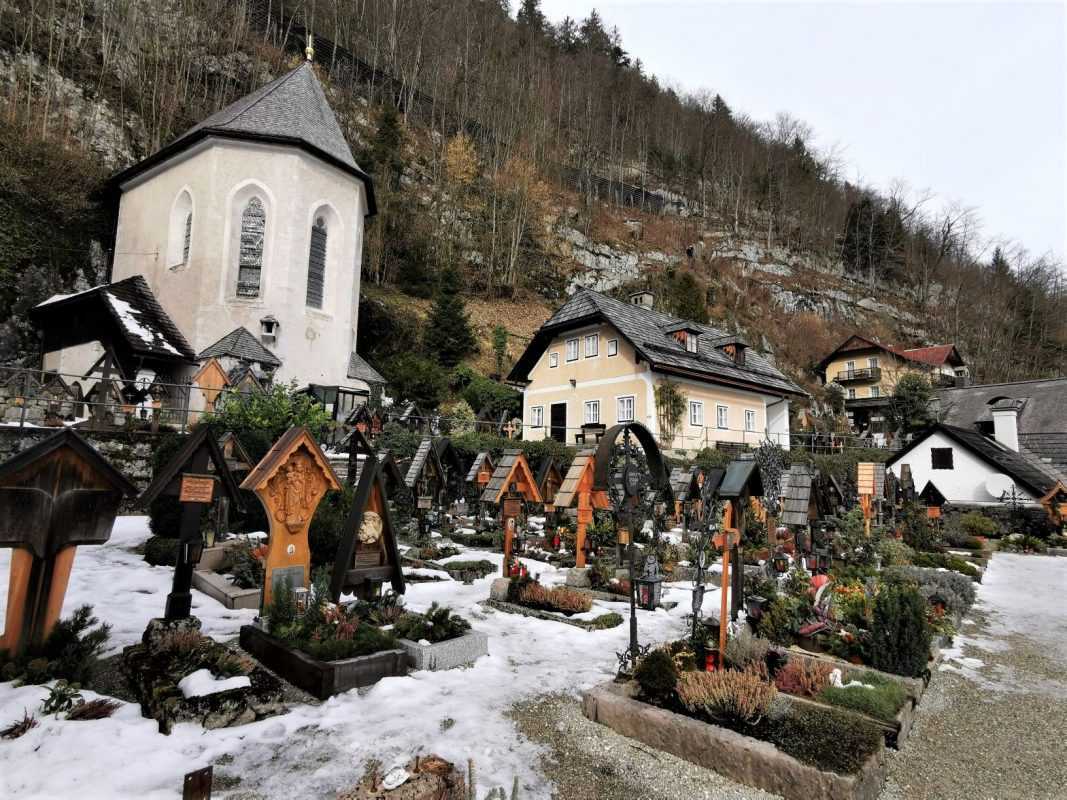 After the slightly bizarre sight, let’s move on pleasant waters and have a good once you are in Hallstatt. As long as you find a restaurant that is open. It is good to know that life in the small village of 800 people, apart from the daytime, is slow. Some of the restaurants are not open 7 days a week and the kitchens are open until 9 p.m. at most places. On the first night, we ended up begging for a frozen pizza, I’m not joking. On the second evening, we were already prepared and went out for dinner at 6 pm. We had a choice of one of Hallstatt’s oldest inns, the Bräugasthof, which was once a beer measuring place. And while you’re in Austria, the Wiener Schnitzel is the best choice with a pint of beer. 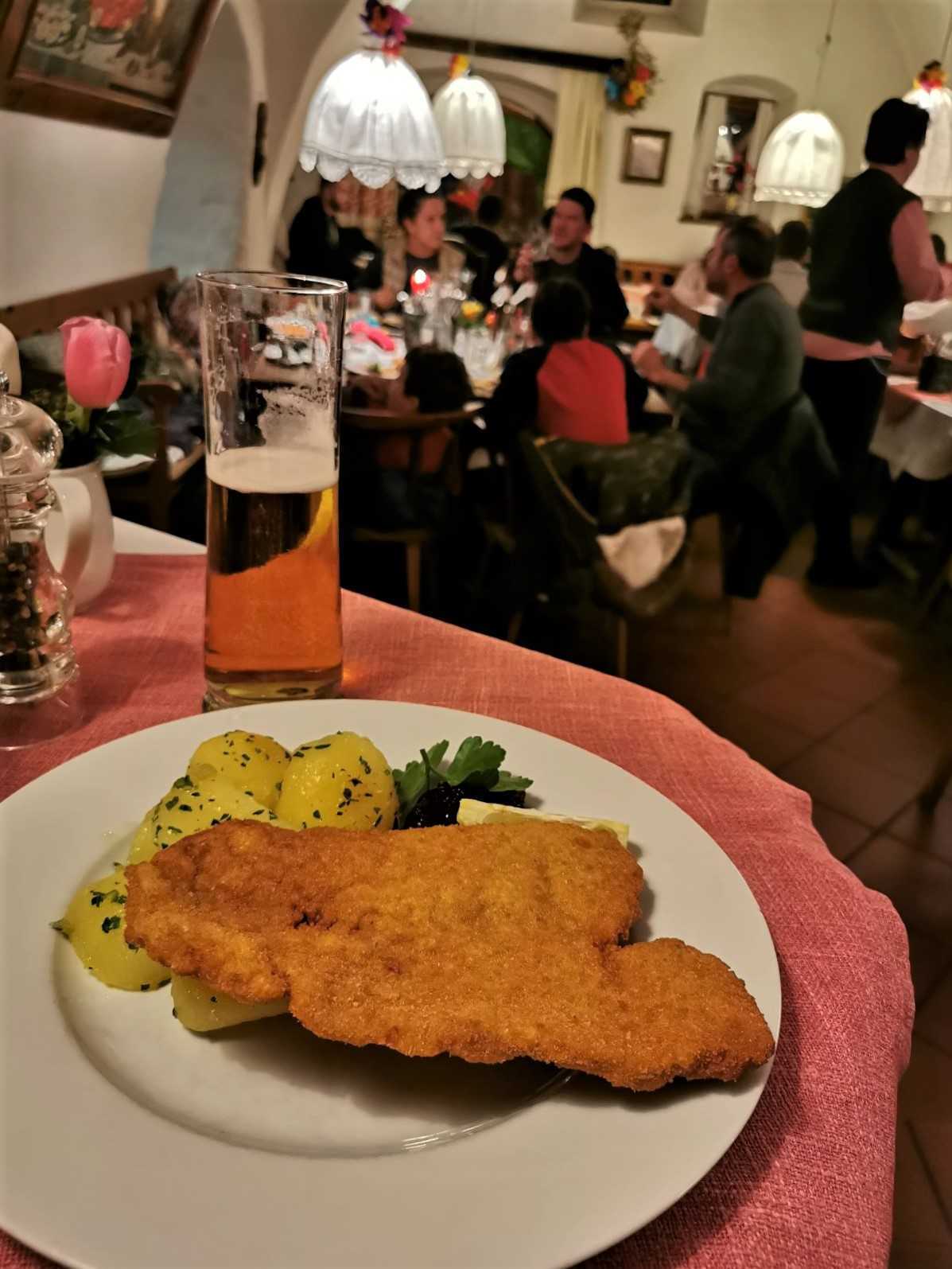 Feel the magic of the moment

Last but not least, let’s go for a long walk in the tiny old town of Hallstatt. Admire the “flat” trees that run upon the houses, which branches are filled with green leaves and fruits in summer. Or get lost in the streets without a map. Let’s watch the swans in the light of the sun. Listen to the roar of the bells of the temples, the sound of the wind roaring among the high mountains, or the chirping of the birds. They already know spring is coming. Hallstatt slowly wakes up from his hibernation world to fill its postcards with life again. 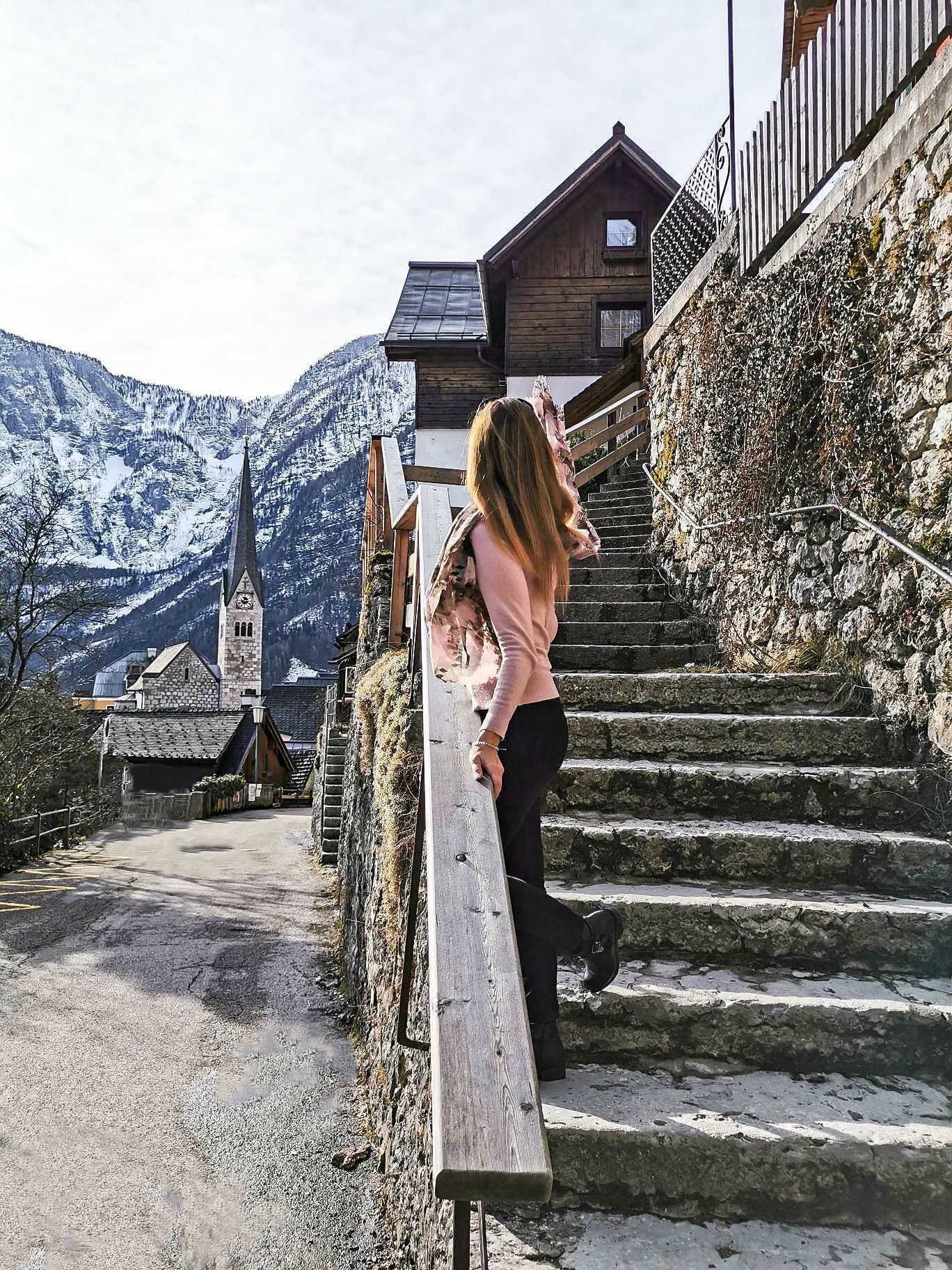 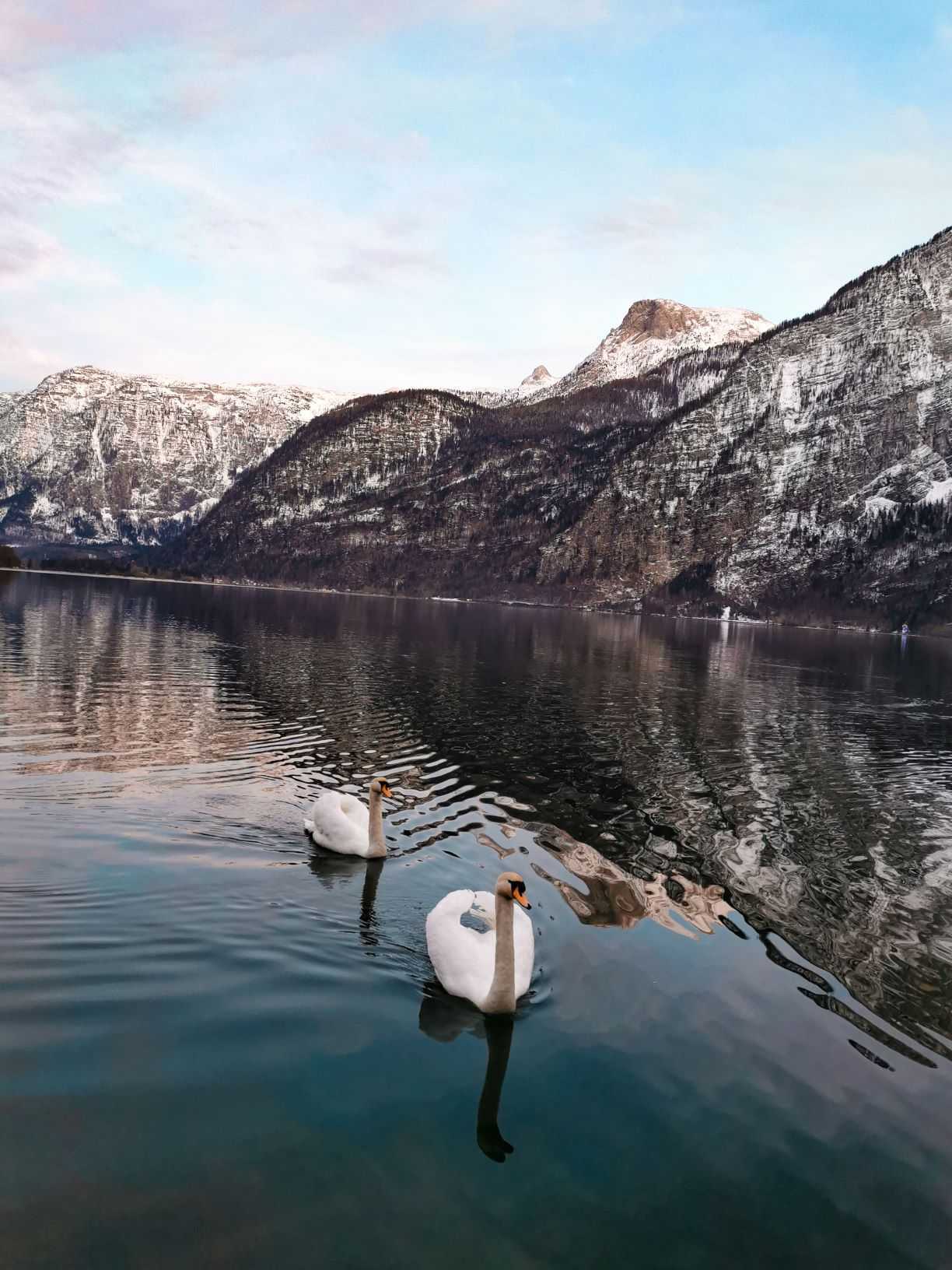