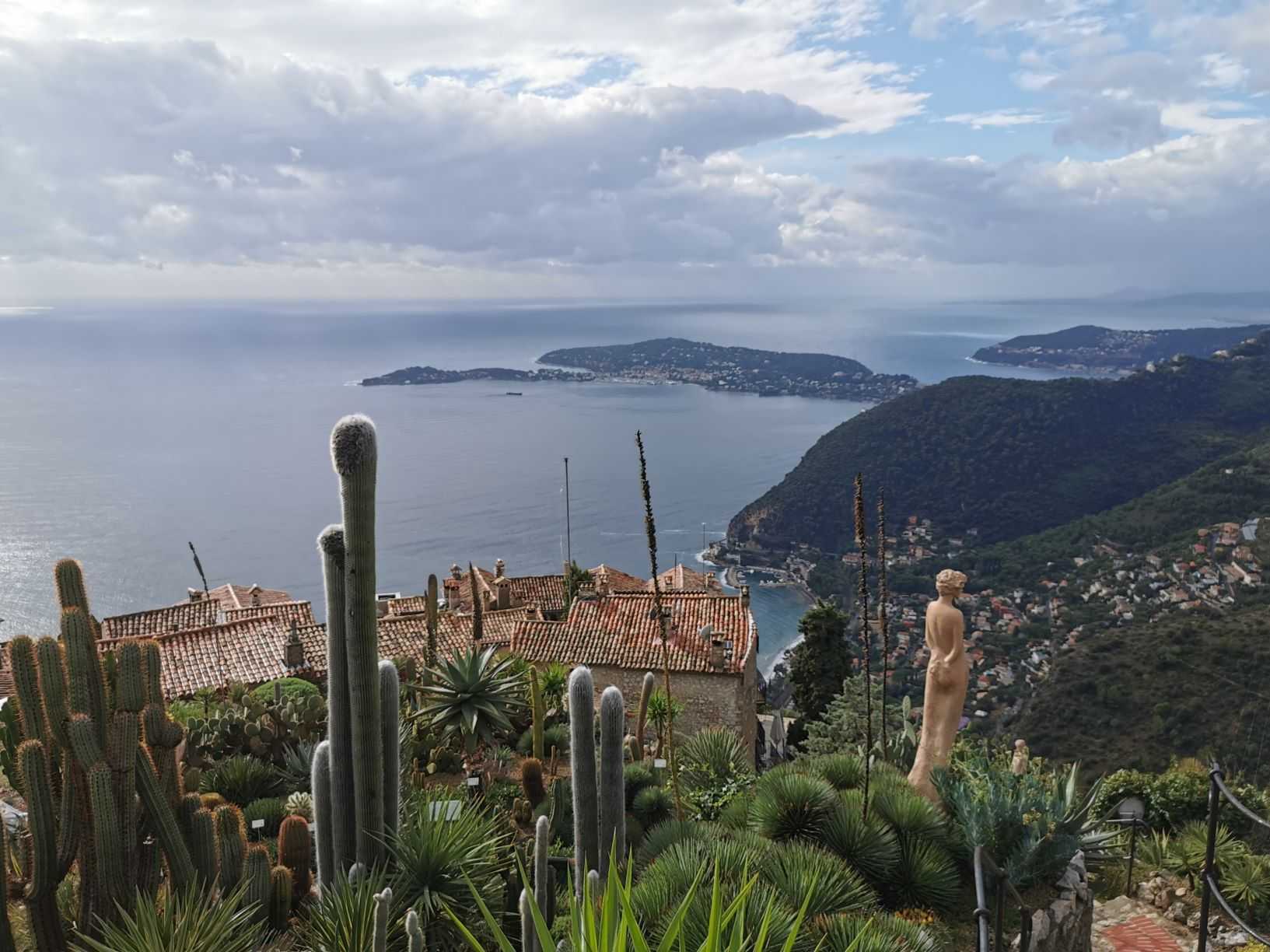 The most beautiful places on the French Riviera

The French Riviera and Cote d’Azur cover a coastline of nearly 120 kilometers on the Mediterranean Sea. If my goal is to include every single attraction in this post, I think I’d sit in front of the laptop until the end of the day and list the must-see sights and gems on the French coast. Since the number of days off I can spend traveling is limited, as well as my available financial resources, four plus one attractions have been added to my Cote d’Azur map. The plus is a cuckoo’s egg, because it does not belong to France, but is an independent state. However, if we are talking about the French Riviera, there is no doubt that Monaco should also be there alongside Cannes, Villefranche-sur-Mer, Saint-Jean-Cap-Ferrat and Eze. From Nice (you can reach the blog post here). All places are easily accessible and can be the perfect choice for a day trip. 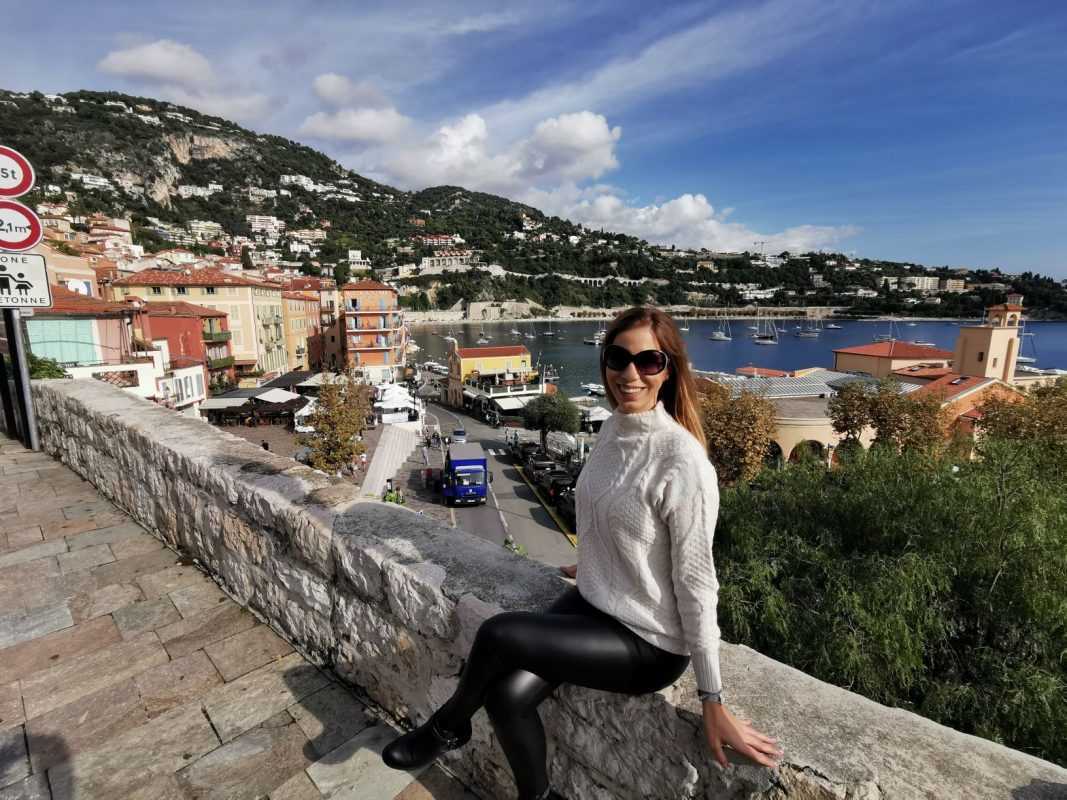 Cannes’ name is best associated with the name of the film festival, which celebrated its 50th anniversary in 2019. Every year in May, the film industry gathers in Cannes, with world stars at the top, to fret with the audience about which film will receive the highest professional acclaim, the golden palm award. Pretty much in my head, too, this picture lived on the place, so it’s no surprise that my first trip led to a film palace on La Croisette Boulevard, the scene of red-carpet entry. 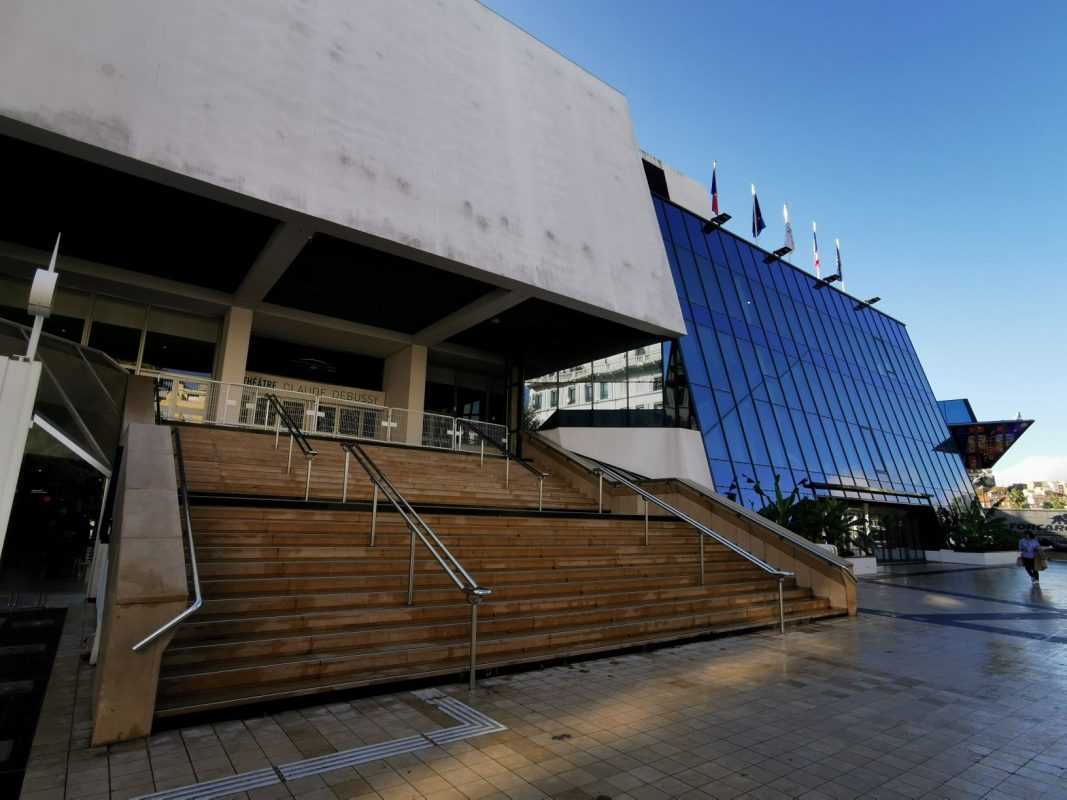 When I saw the building, it was a disappointment for me. The trickments during the film festival – red carpet, decorative lighting etc…- makes the place look elegant on the photos and television screens, but it’s actually a mediocre cube building. At the bottom of the building, a souvenir shop and some iconic handprints are placed together in an exhibition hall. It is a pity that visitors are not allowed in the building itself, but you can go to the Olympia cinema (former Majestic Cinema). Opened in 1930, the cinema can accommodate up to 1,000 spectators and is one of the venues of the film festival where the films are screened. 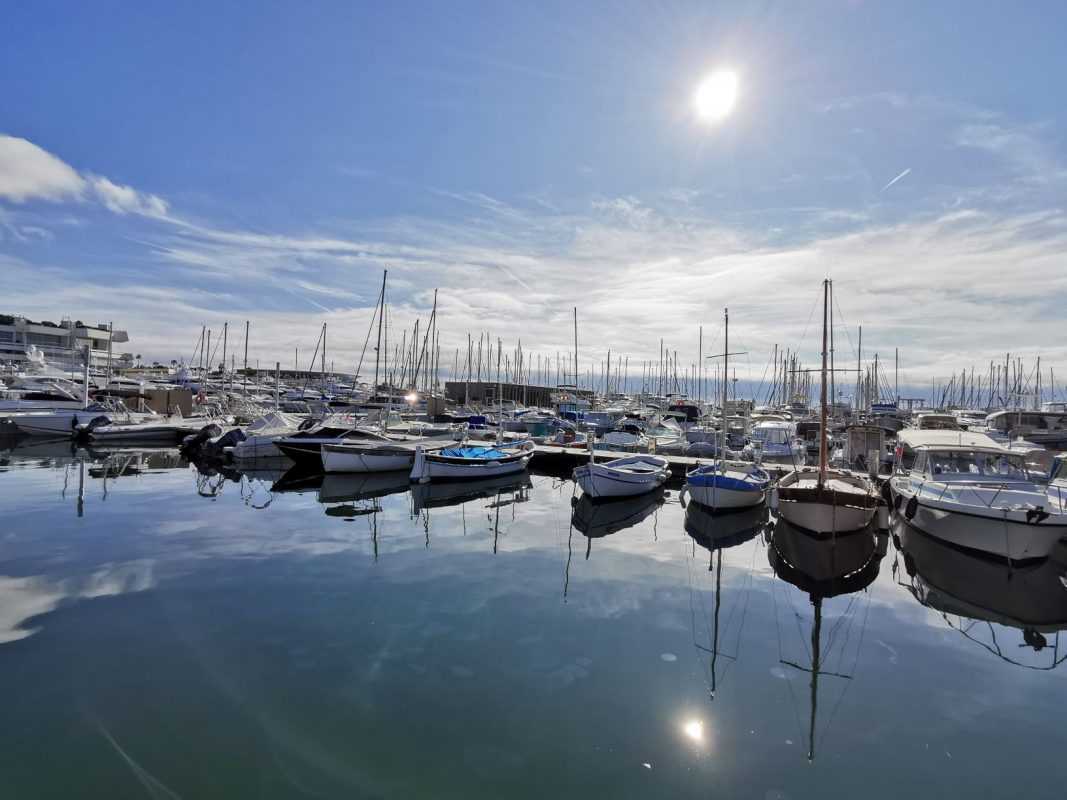 The marina is very cozy in Cannes, I liked it much better than the Nice version. Public safety is presumably good enough in the city, because cruise ships and yachts stood unattended with the boat bridge lowered on the water, making it available to virtually anyone to board. I’m not a risky player, so I used the French Riviera Pass to get my free boat ticket to the surrounding island of Sainte Marguerite to see the Royal Fortress, which is best known for the iron masked man being held here.

The island is a popular resort for beachers due to the turquoise sea in summer, and in autumn the place is already quite deserted. I didn’t have time to visit the other island, Saint Honorat, which has a monastery built in 410. Both islands from Cannes are easily accessible by boat in 15-20 minutes, if you don’t have a Riviera card, the trip costs €15. 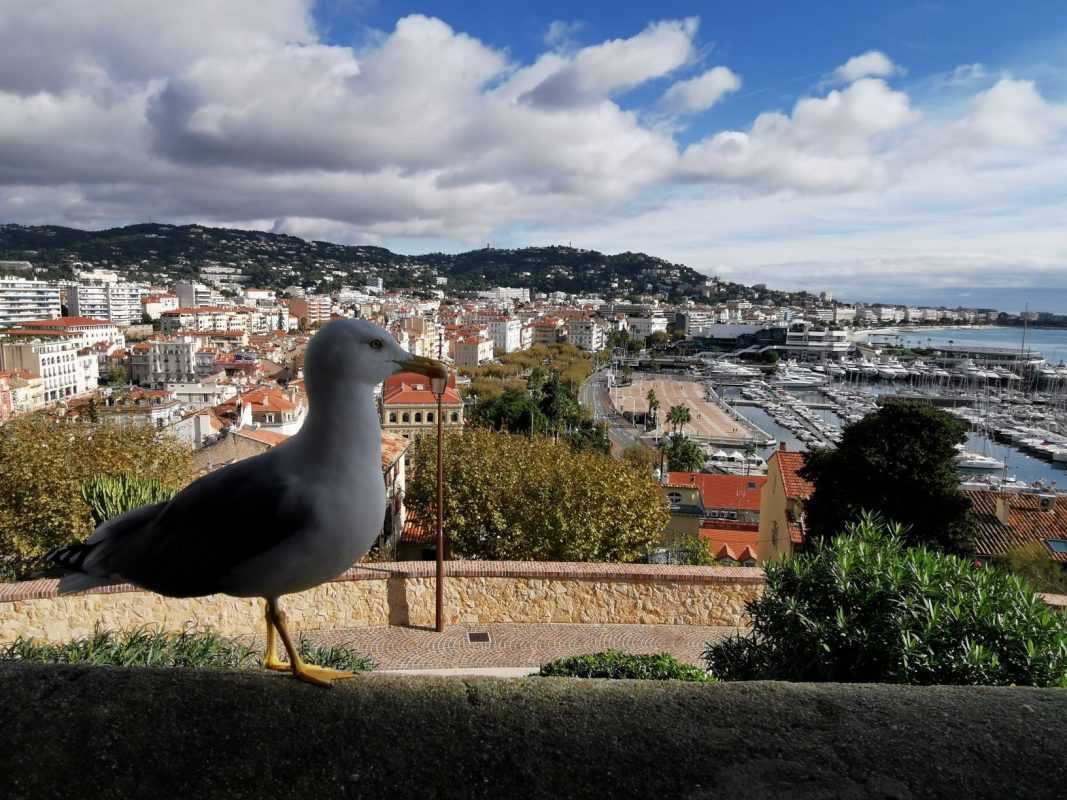 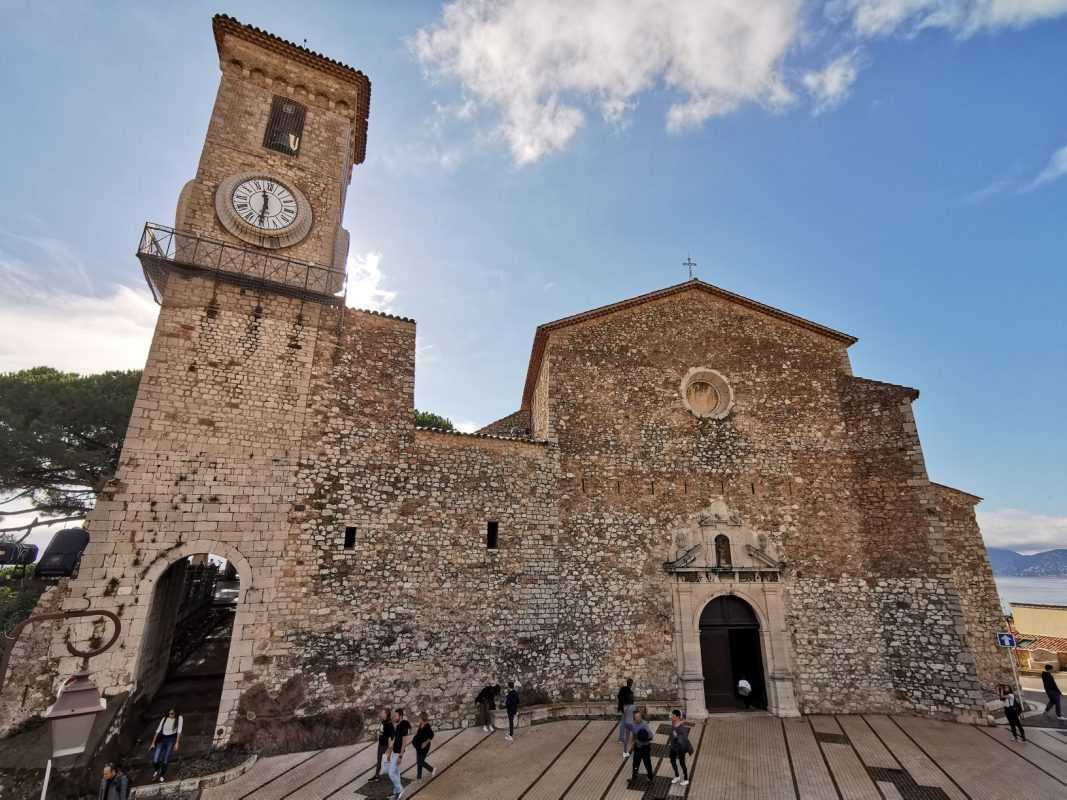 In Cannes, the old town is definitely not overlooked, which, in addition to its charming streets, is also the most beautiful lookout area. Notre Dame de L’Esperance Church offers the most beautiful panoramic view of the bay. Even a seagull modeled for the camera, further enhancing the atmosphere of the place. 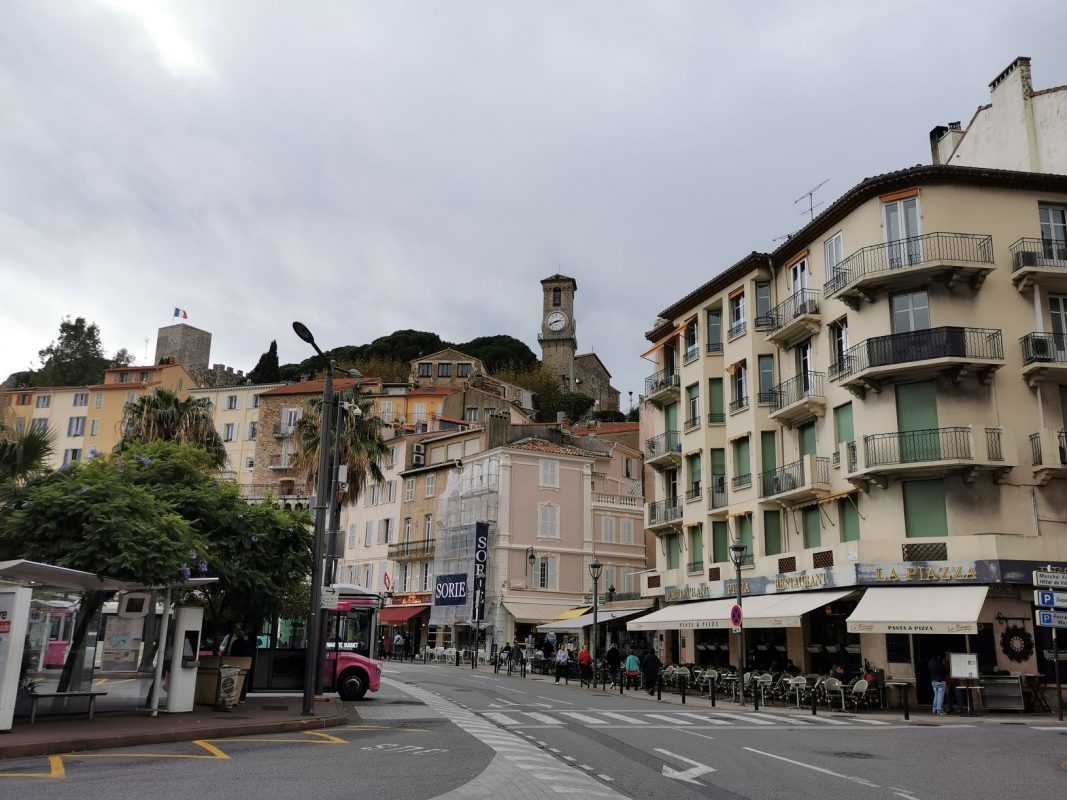 If you’re looking for delicious food, don’t miss Rue Felix Faure’s restaurants, where fresh sea urchins and oysters are on the table. And if anyone wishes to shop some nice things, let’s go to Rue d’Antibes. Before that, however, make sure that your credit card is filled up with money, because there is no shortage of luxury shops and products in Cannes.

Just a few kilometers from Nice, the seaside resort town is best known for its colorful houses and cozy seaside restaurants. In addition to city buses, Hop-on Hop off buses stop here, which can be used free of charge with French Riviera Cards. With just over 5,000 inhabitants, Villefranche-sur-Mer today mostly lives off tourism. In its port, la Darse, there are many boats waiting to run out to sea. I would have liked to have run out with one, too, because there is an oceanic observation post in Villefranche-sur-Mer, where divers and snorkelers alike are expected.

Villa Ephrussi, famous for its beautiful park, is the only and most famous attraction in the village, owned by the Rothschild family. The entrance to the garden is €15, which I wanted to be paid for, although the French Riviera Pass includes this location. With gentle effect, the cashier finally pulled down the card and miracles of miracles, it worked. So, ladies and gentlemen, if you have the Riviera card, admission is free. The construction work on the villa was completed in 1912 according to the ideas of Baroness Beatrix Rothschild. 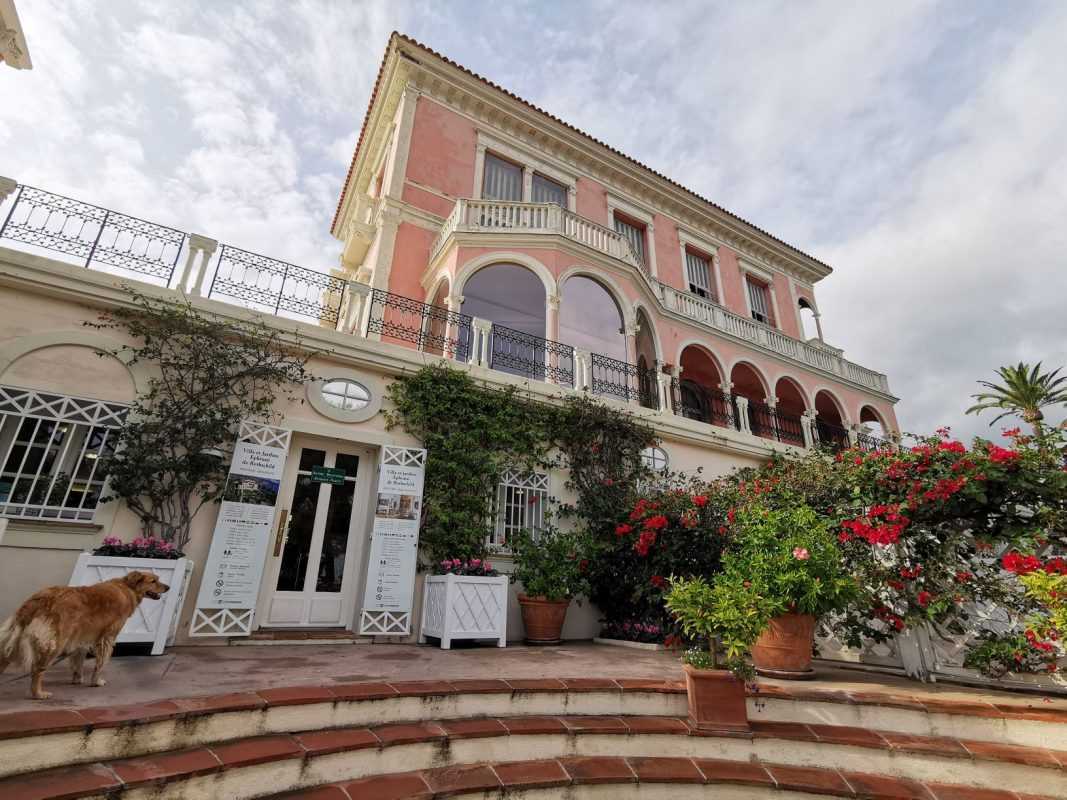 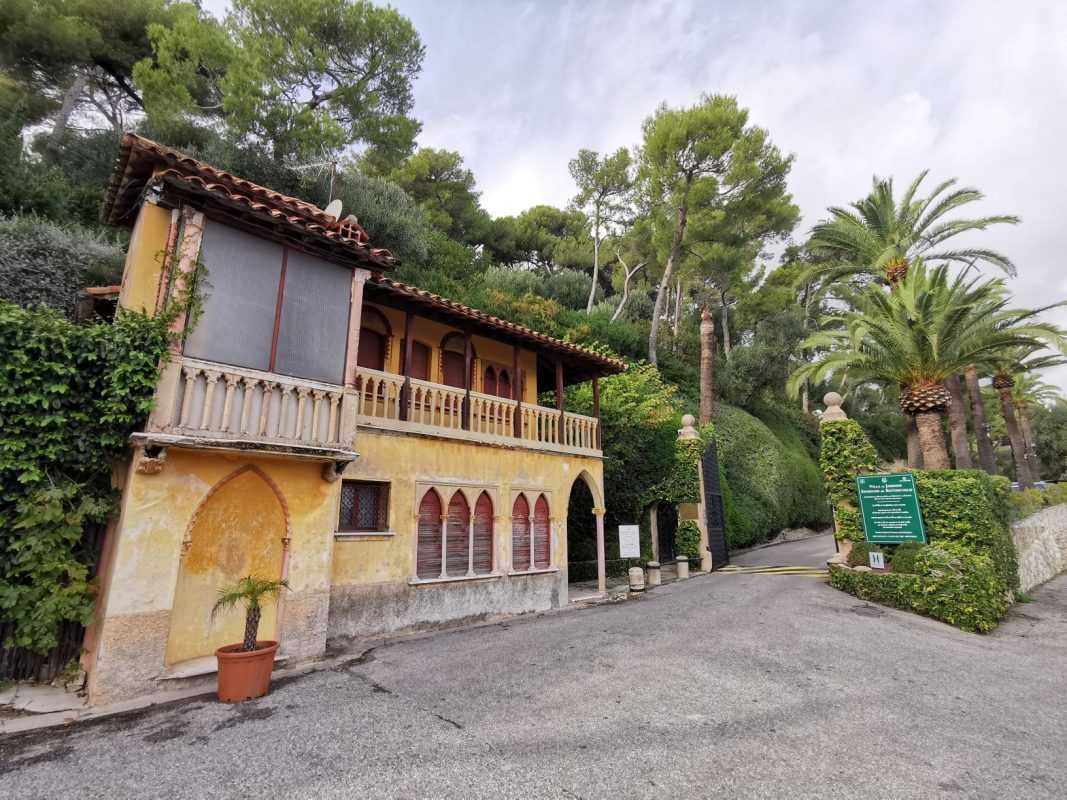 The most special part of the villa is its carefully manicured garden, which is divided into nine different areas: Spanish garden, stone garden, Japanese garden, exotic garden, Florentine garden, rose garden, Provance garden, a French garden and Sévres garden. Although the park has partly bloomed in autumn, it has still provided stunning views with its waterfalls and water jets from fountains dancing to classical music every 20 minutes.

Rothschild’s villa park opens its doors to painters in June each year, who can get inspiration in one of the nine gardens. Inside the villa, Baroness Beatrix has a rich collection of porcelain, paintings and furniture with audiovisual guided tours.

One of the most beautiful but undoubtedly difficult places to reach for me was Eze on the banks of the French Riviera. I arrived by train from Nice (€2.90), as my accommodation was about 200 meters from the station, so it was obvious to choose a train. By then, I had several kilometers in my legs because of the excursions of the previous days, so when I saw the 1.6 km route on Google map to Eze’s botanical garden, I decided what a little walking would do for me. Well, walking meant actually climbing on the famous Nietzsche trail. Climbing up the 500 meters, I enjoyed it at first, while there was a paved road and I stopped at several places to admire the view. 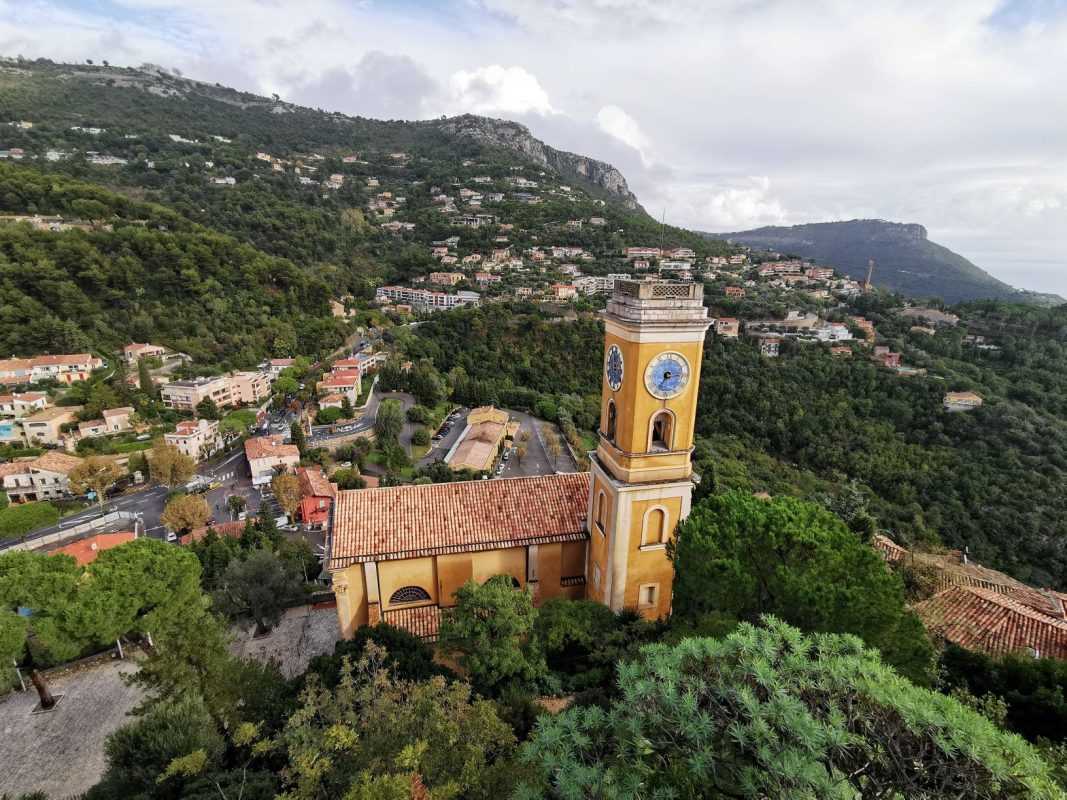 But after the rain began to pour and the asphalt was replaced by rocks, I did not enjoy the climbing so much and prayed that I would not fall into the abyss, as no one will find me here. After getting to the top in 60 minutes, I cursed Google to myself a thousand times, while moaning Zarathustra’s mantra: “You’re on your way to your greatness: don’t let anyone snub for your heels here! Your feet are wiped out behind you on your way, and above this wealth is written “impossible.”

Eze’s medieval village and botanical garden were a cure for my tormented body. By the time I got up, the rain had stopped and the sun was shining. It would have been cheesy if I’d seen a rainbow because what I saw from above was quite dazzling. Fairytale cottages with amber and fig trees. Tiny souvenirs and souvenir shops of the artisan, not in a touristic way. Not to mention the botanical garden, which is incredibly beautiful. Actually, I wouldn’t waste any more time on words, let the pictures speak. 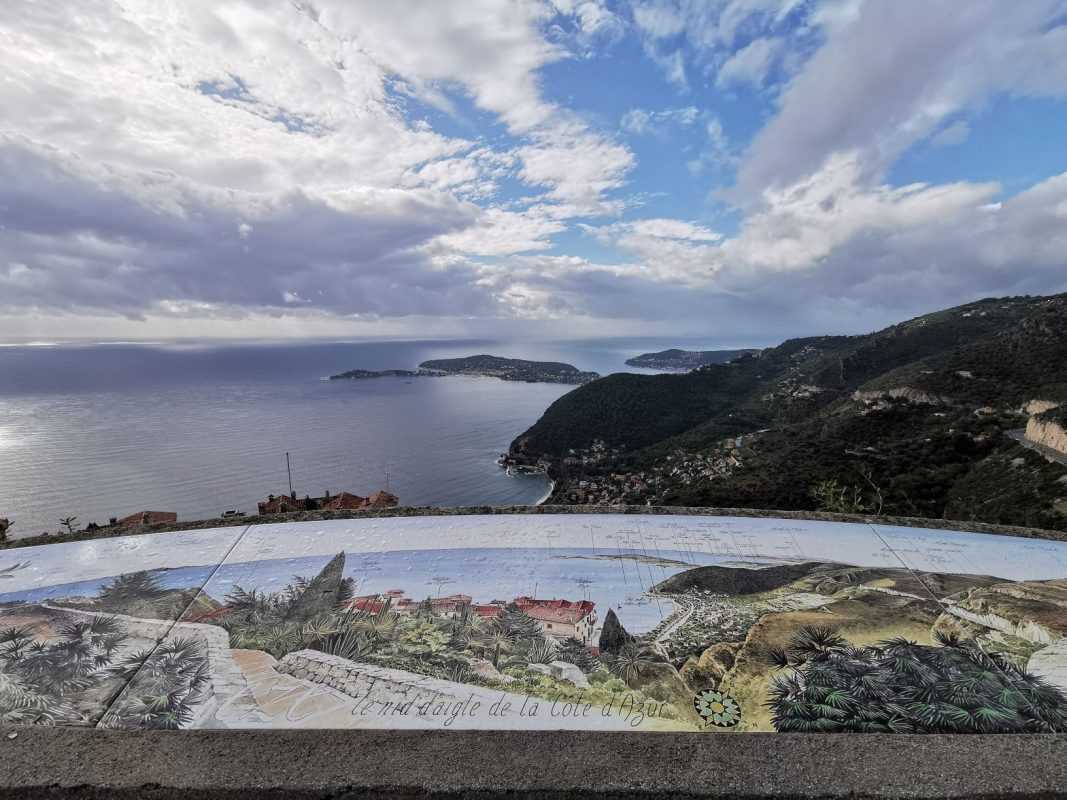 The 48th country on my travel map was Monaco. I know it’s a tiny place and it’s the second smallest country in the world after the Vatican, but it still enjoys independent status. So with the Monarchy of Monaco, plus one country was added to my world map. Despite the fact that the size of the country is not very large, it is worth a visit here, because the country is by no means just about gambling, as most people usually think after hearing the name Monaco. Here’s the Prince’s Palace of Monaco for example, where there’s a guard change every day at 11:55. Unfortunately, the building itself cannot be visited until 1 April 2020, which is also home to the Grimaldi family, which has run the country since the 13th century. 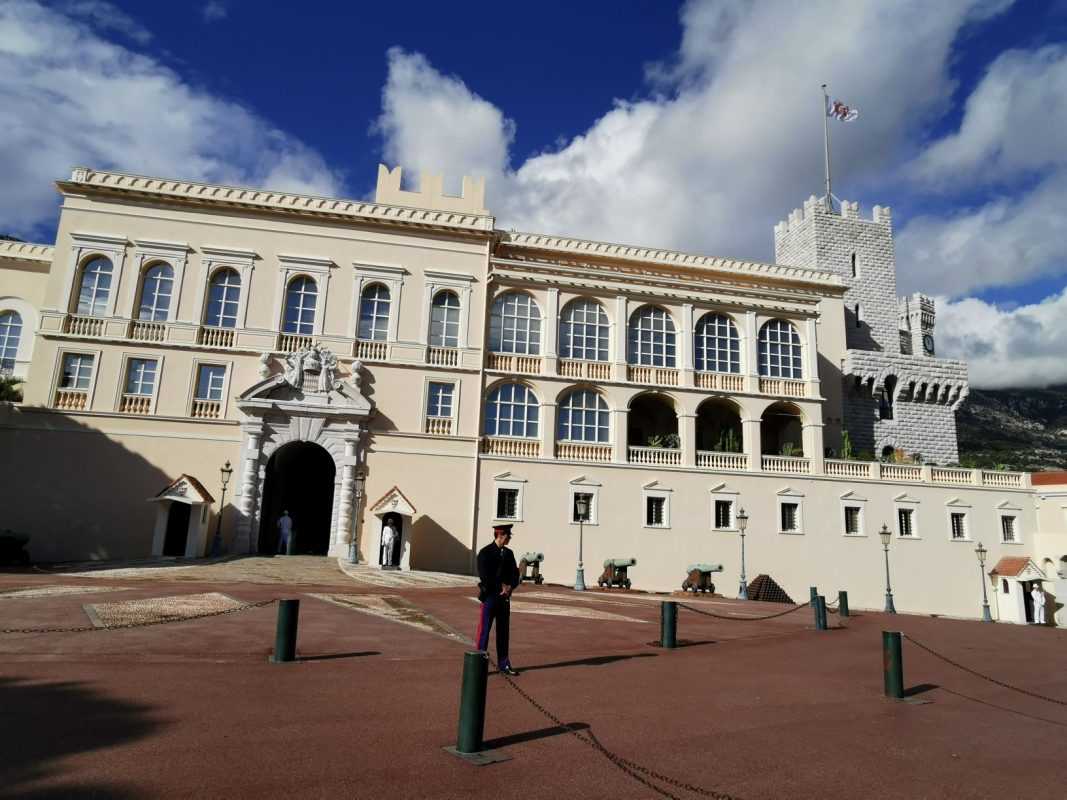 One of the most famous love stories in history is also related to Monaco. The beautiful American Oscar-winning actress Grace Kelly and handsome Prince Rainier married in 1956, ending a tragic car accident of the Princess in ’82. Both the marriage and the final resting place took place in St. Nicholas Cathedral, which, with its white façade, stands at one of the highest points in the country. 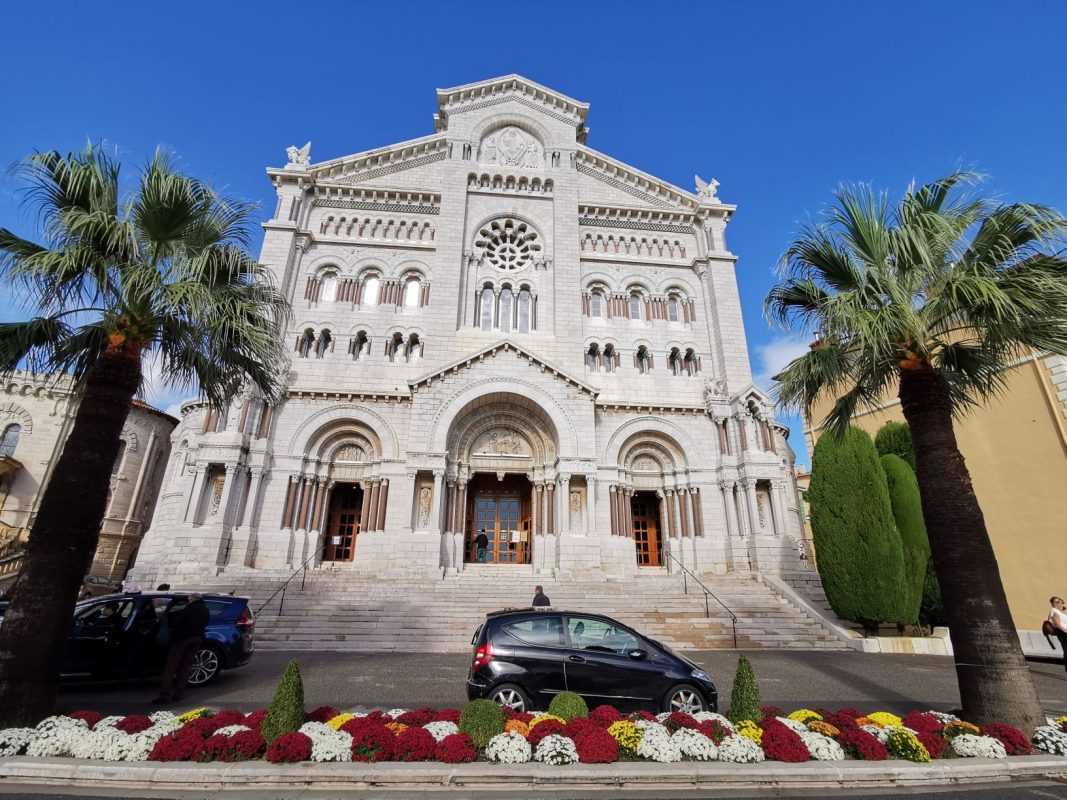 Monaco and most of the city lie on a mountainside, while the Mediterranean Sea is cut in half by a large rock. On both sides of the rock, bays of astonishing beauty consist of yacht ports in Port de Fontvieille and Monte Carlo, which together can accommodate 775 boats. If someone wants to park his boat here, it’s good to prepare in advance that it won’t be cheap. Depending on the size, the storage fee ranges from €82 to €182 per day. 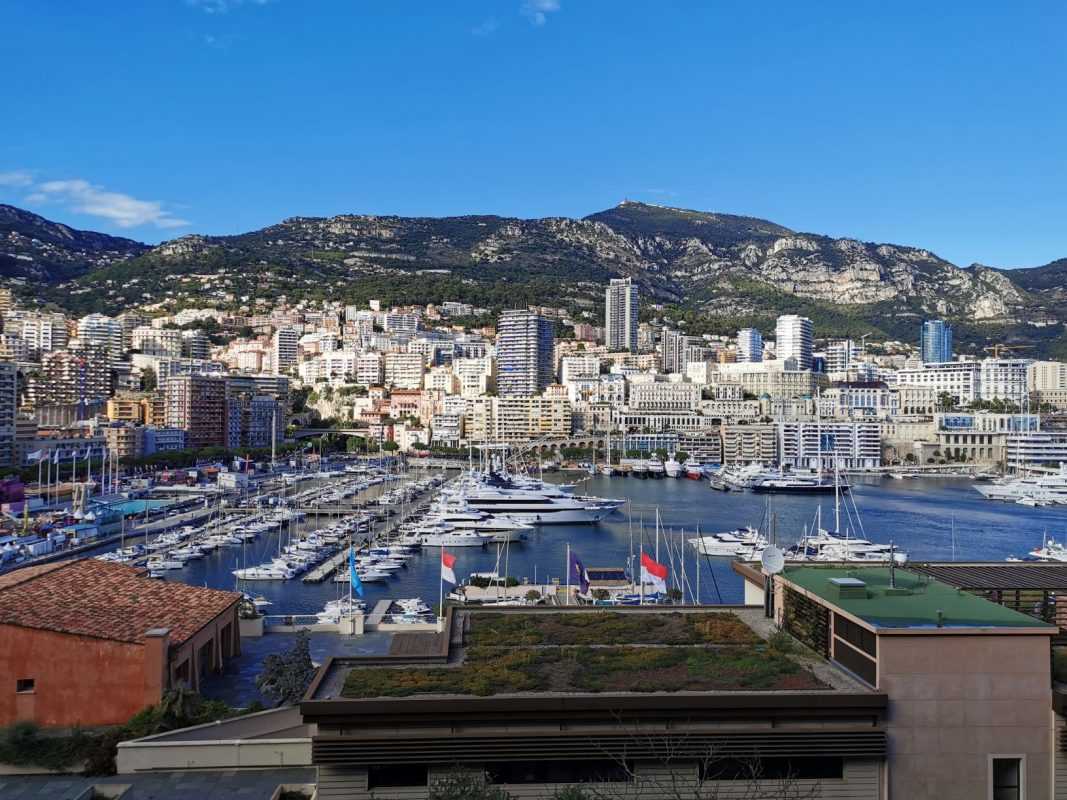 After Baku (I wrote about this here), I was once again able to see an urban Formula 1 track, the history of which dates back to 1929. Official F1 races have been held in Monaco since 1955 and it was of the most technical and dangerous racetracks due to the narrow streets. Most times (six times) Ayrton Senna was able to win here, who in 1994 suffered a fatal accident not here, but in another Formula One race, the San Marino Grand Prix. 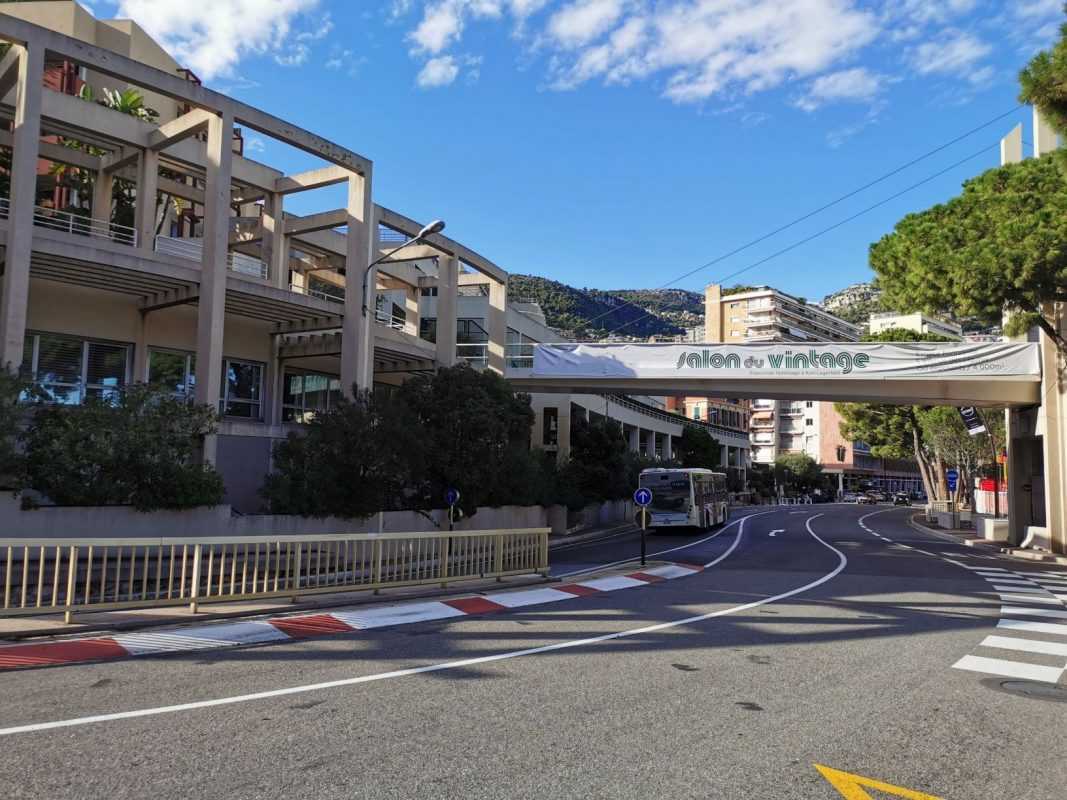 One of the most anticipated attractions for me was the Oceanographic Museum of Monaco, which opened in 1910 at the top of the 85-meter high cliff. The construction of the museum was ordered by Prince Albert I, who was himself an obsessive ocean explorer. His academic merits were praised with the Gold Medal of the United States Academy of Sciences, but he was also a member of the Royal British Geographical Society. The museum building is very interesting because its two lower floors are in line with the Mediterranean Sea, while the entrance and first floor are already at the top of the cliff. 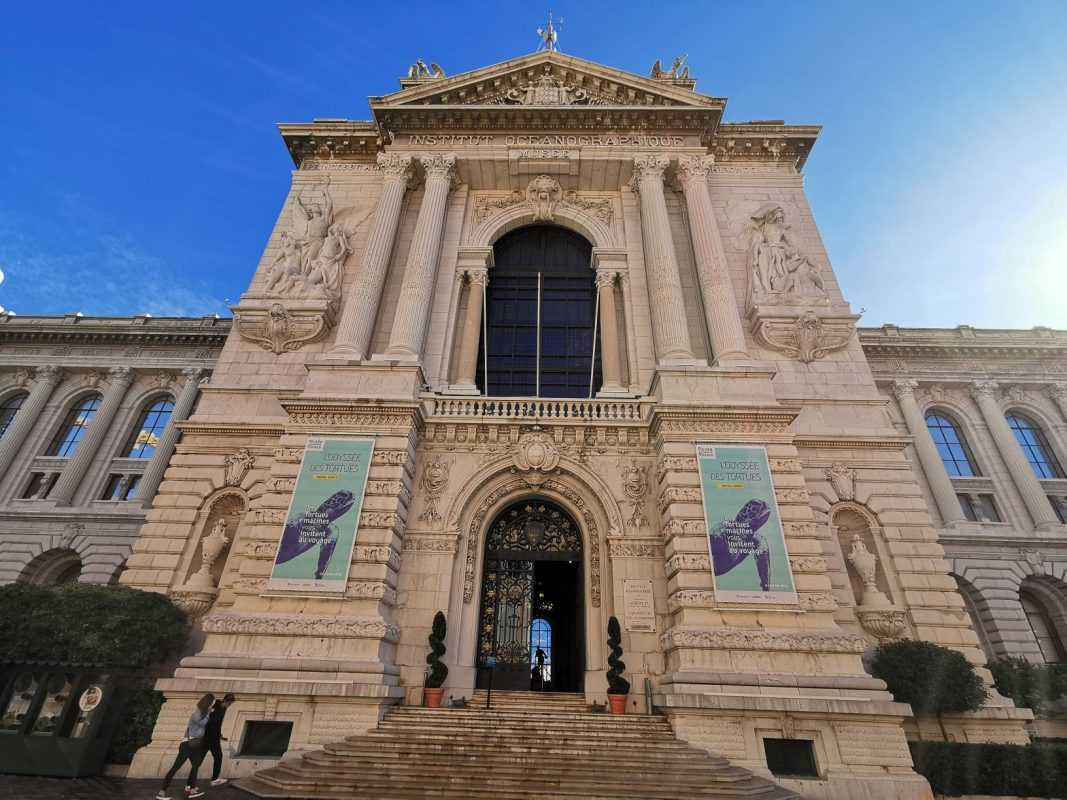 At the lowest level, visitors can learn about the wildlife of the seas and oceans in aquariums, while animals stuffed on the -1st floor (including a polar bear), whale skeletons, can also be seen in a model of the late Prince of Monaco research vessel. Many special tools and equipment for ocean floor research can be seen in the museum, including one made by Captain Cousteau, who ran the institute from 1957 to 1988.

A trip to Monaco would not be without full gambling, for which you can hardly find a better place than the Monte Carlo Casino. Admission to the building is free of charge, where visitors are greeted by a statue of the goddess Fortuna and then by an installation of colorful chips in the lobby. On slot machines, the minimum bet is €5, which I risked, but unfortunately this time I had no luck. In the other arcades where they are likely to play with high stakes – at least the army of luxury cars in front of the casino suggests it – I could no longer go in without registration. 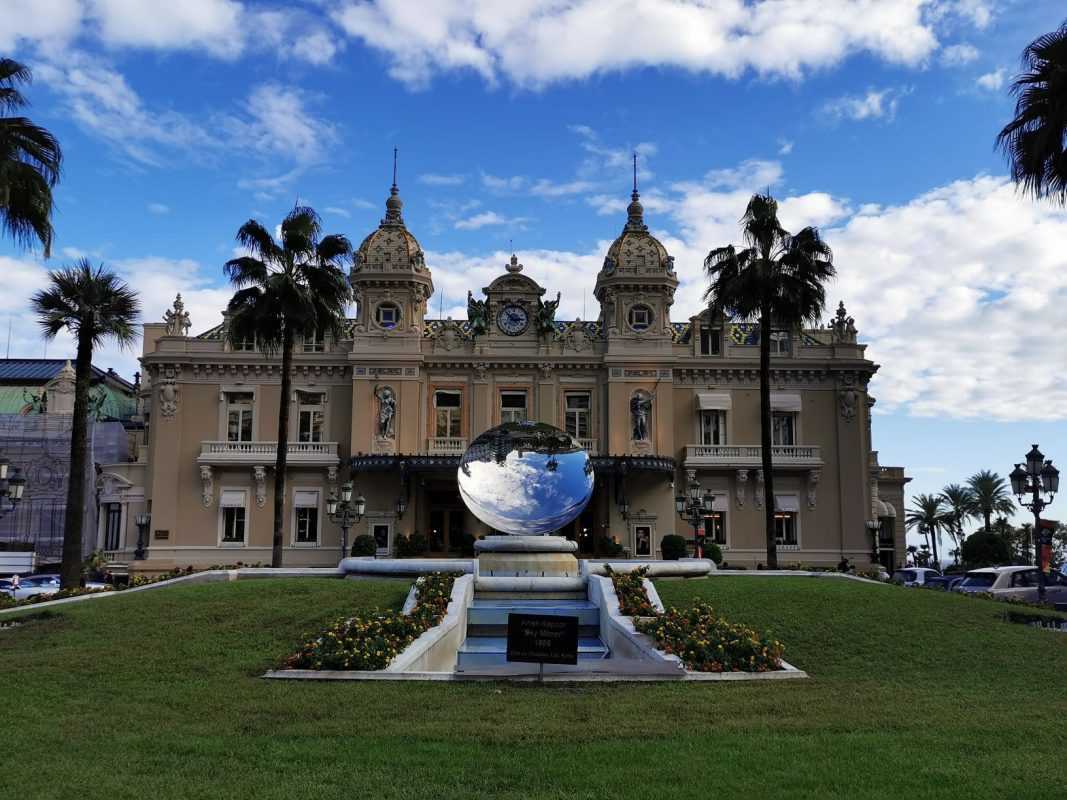 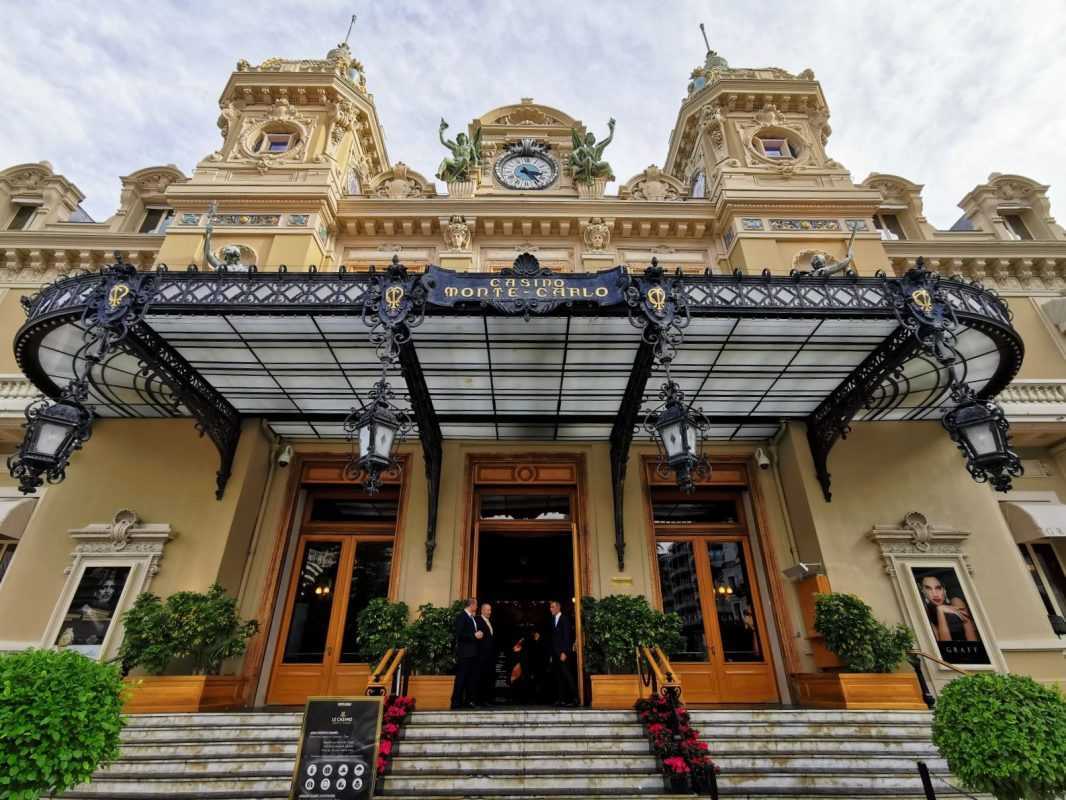 The good news is, I’ve already had the best luck in my life. I got my health back (you can read about my personal story here), which is more freedom than one can wish for.