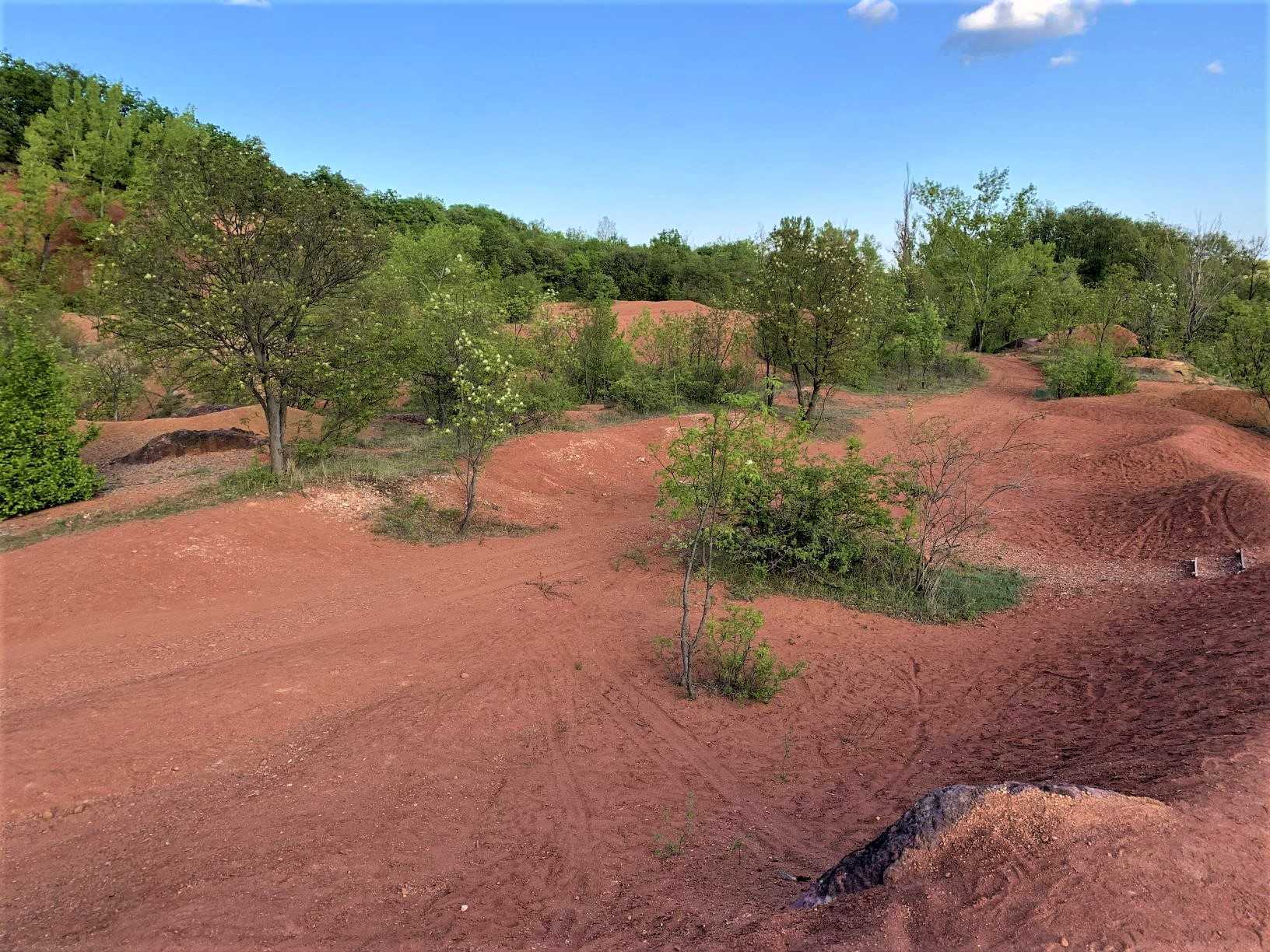 The fact that The Martian movie, which was presented in 2015 and features Matt Damon, among others, was shot in Hungary is probably known to those who love movies. More precisely the film was partly recorded in Etyek, at the Korda film studio, where they used modern technology to fly actors to the red planet in order to find their way back to Earth. The Golden Globe award-winning film had a $108 million budget and probably the set and technology cost a lot. The money spent on this could have been saved if they didn’t go to a movie studio, but they went to Gánt instead. In the area of the former bauxite mine, the landscape is as red and lunar as if we were really on Mars. And you don’t even need a set.

The mining area in Gánt is undoubtedly world-famous, if not as much as the aforementioned Hollywood production. The bauxite field, which is also a rarity in Europe from a geological point of view, was once replaced by the original ocean, Tethys, which had carbonate sediment at the bottom. Over time, the rock plates, which were constantly moving, closed the ocean, and the sediment was creased. It is hard to believe, but 45-50 million years ago in Hungary, there was a warm, subtropical climate, thanks to which karst rock was converted into bauxite. 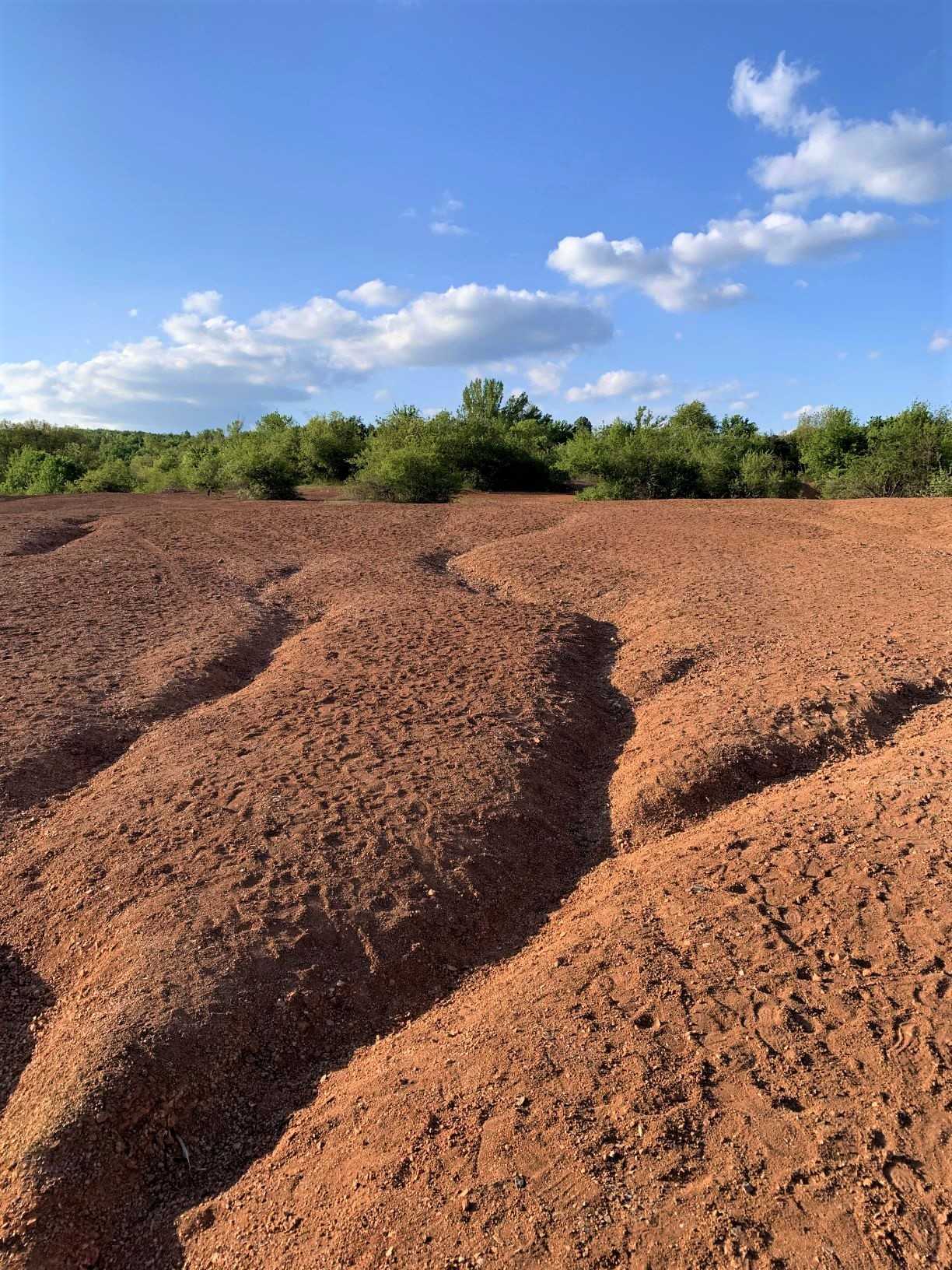 We jump forward in time a lot and arrive in 1920. That’s when it was discovered that in Gánt there is a rich karst bauxite site. Moreover, it is so rich that in the 1930s it was considered one of the largest bauxite mines; Hungary gave me 1/3 of the bauxite extracted in the world. The secret to success was that they were able to obtain valuable treasure by open mining, and there was no need for deep mining technology procedures. 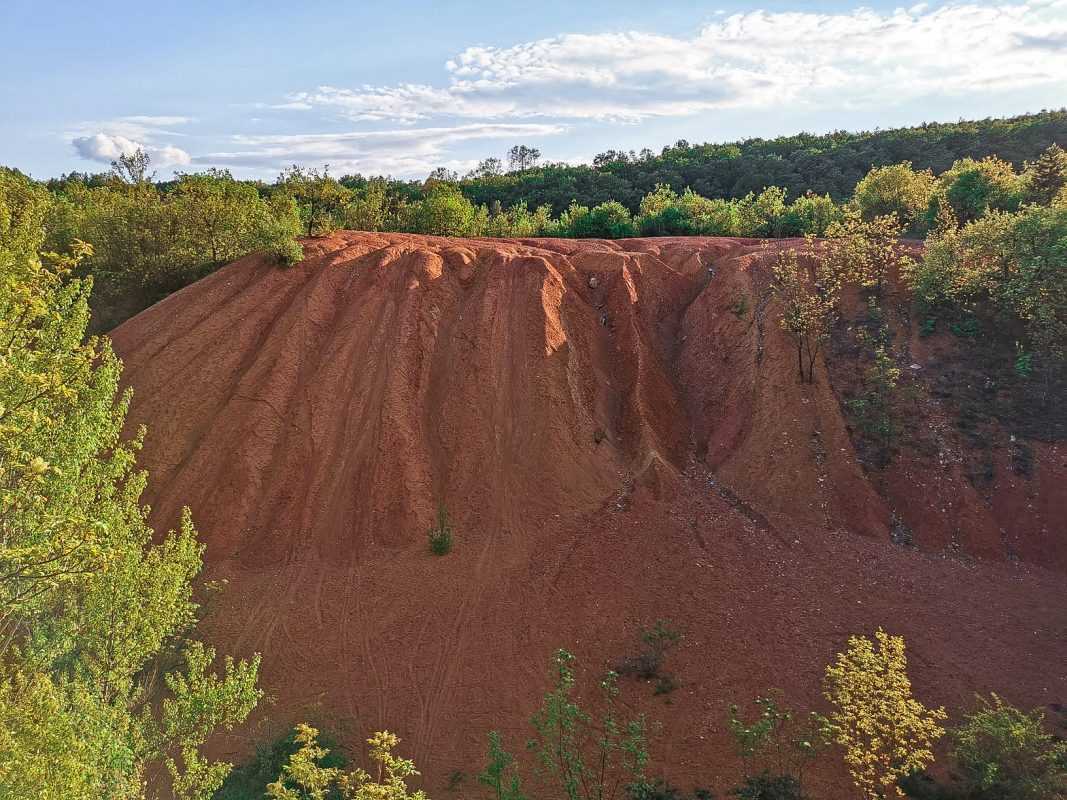 But why is bauxite important and what is it used for? Bauxite is the most common metal ore in the earth’s crust and the alum extracted from it is essential for the production of aluminum. Aluminum is used in almost all industries, be it mechanical engineering, aviation, food or military. Interestingly, in the 19th century, aluminum was worth even more than gold. Today, however, it is no longer worth investing in, since in 1987 the extraction ceased in Gánt.

In the golden age, 600,000 tons of ore were mined here, which caught the attention of even the Germans in World War II. Fortunately, the mine was not obtained by them. Today, there is no trace of the former extraction in the desolated countryside, but the Balás Jenő Bauxite Mining Museum in the village still preserves the memories of the 20th-century mining world. After so many historical and geological crash course, let’s get to what you can do here in the Bauxite Geological Park in Gánt.

First of all, take a lot of pictures here. The nature reserve can be visited at all times of the year in exchange for an entrance ticket. If you are heading for Kissakő and Csákberény, it is worth detouring this way, as the red slopes and karst rock really are an eye-catching sight. Especially at sunset, when the whole mining site is orange and purple. For the sake of a good photo, you should tread carefully, as the soil is quite porous. One wrong move and you’ll find yourselves at the bottom of the canyon. 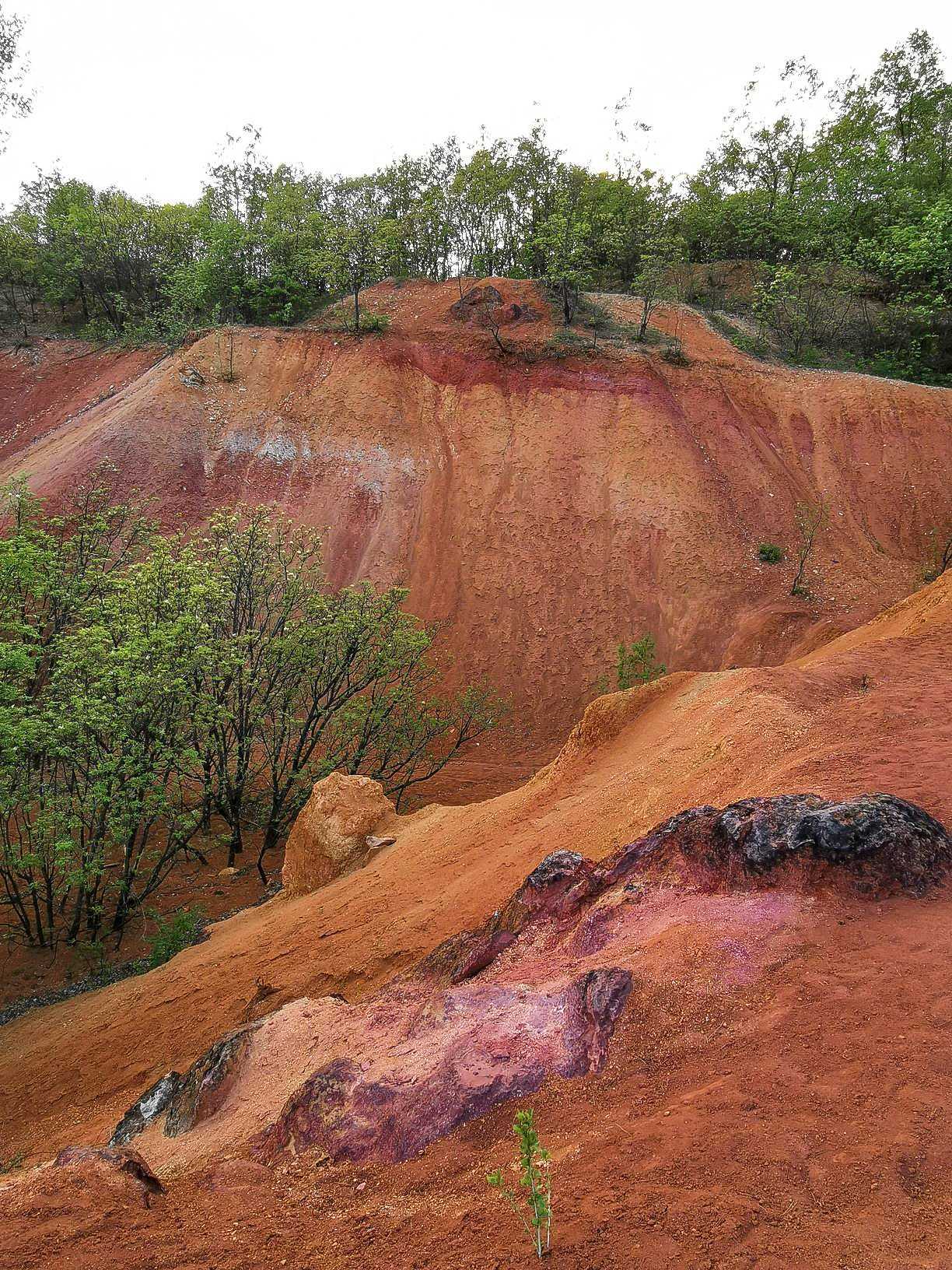 Second, you can take a long walk in the mine area. You can walk the 13-stop trail through the approximately 1×3 km area in an hour and a half. Hiking is worth admiring the huge cliffs up close, on which you can still see the seed planes of the former rock plates. Here and there you can also discover manganous ore, the color of which ranges from magenta to yellow to purple. 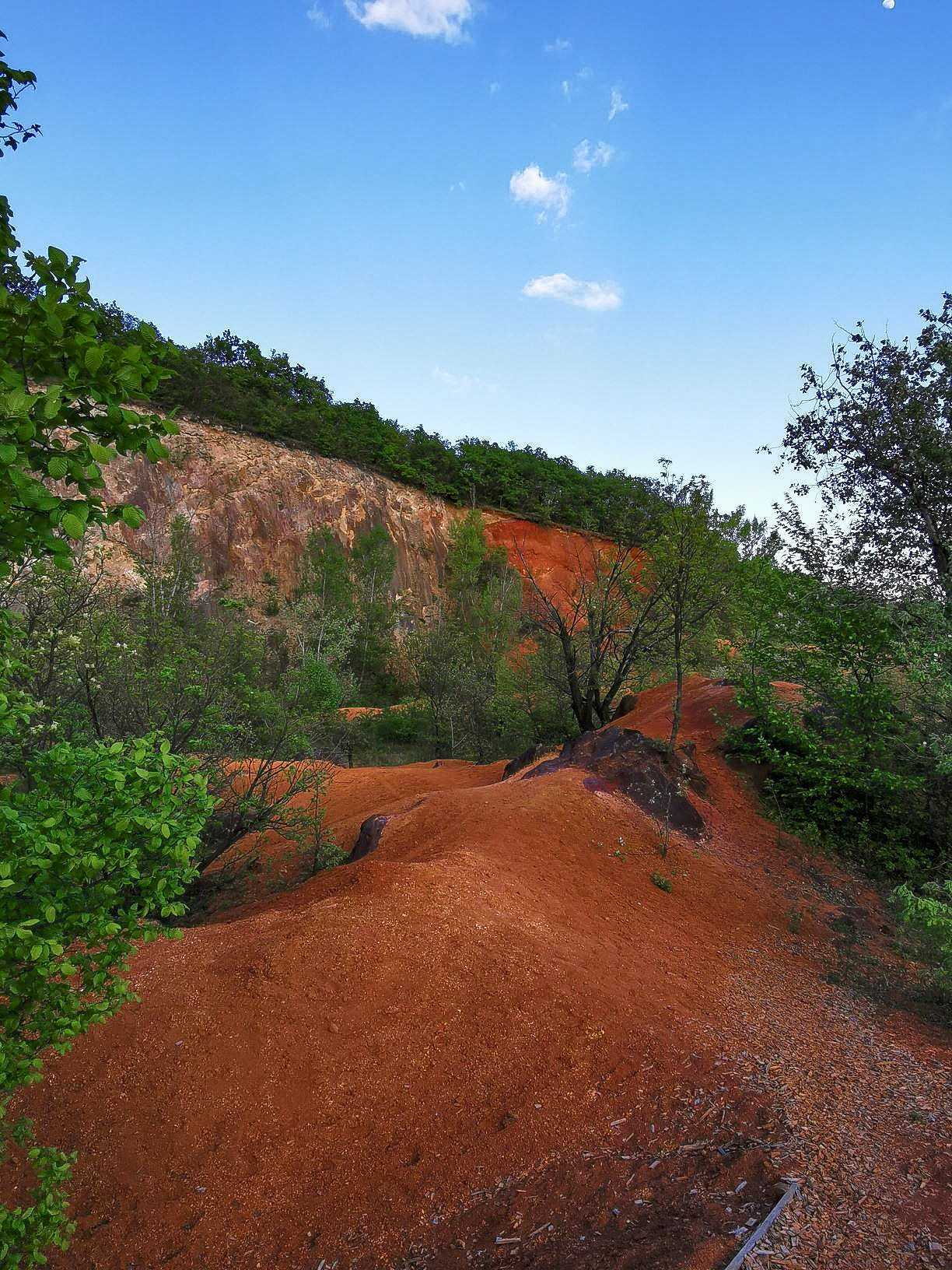 According to color therapy, red energizes and encourages action. I just closed my eyes, absorbed the heat coming out of the ground, and traveled far in my mind. But by the time I opened my eyes to marvel at the world that surrounded me, I wasn’t on the African savanna. Only on the Hungarian Mars, where, despite the harsh conditions, life still breaks its way.  And there is a signal and gravity on it, and I tested them both. 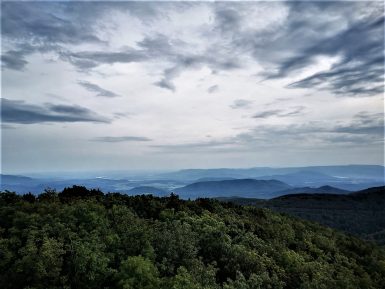 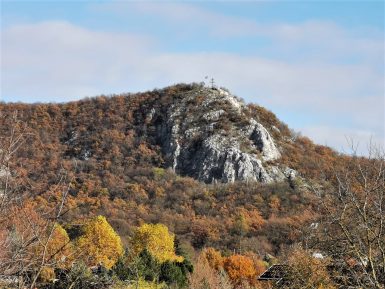