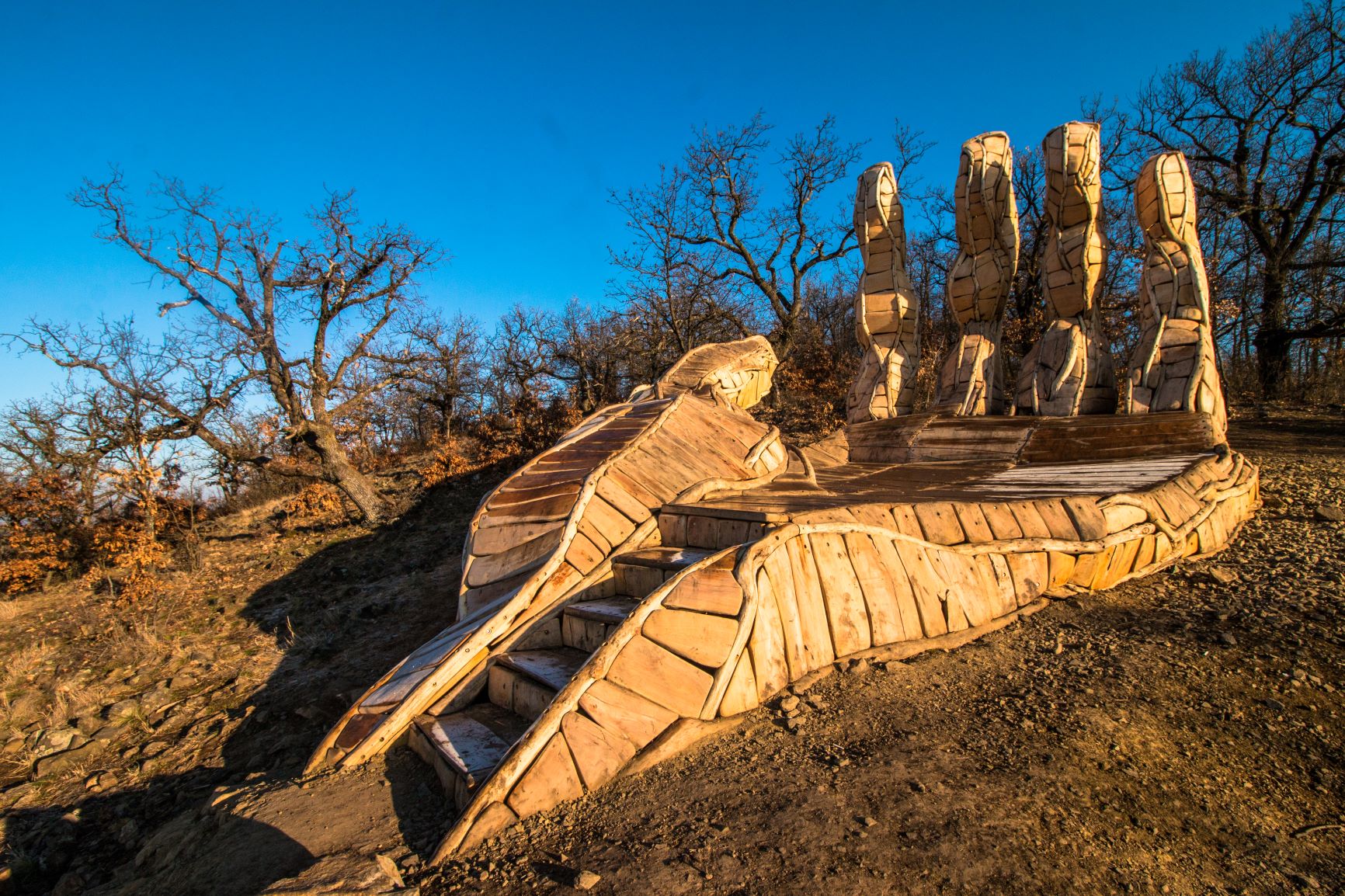 Most people think of Hollókő when they meet the name of Palócföld and Nograd county. Indeed, the UNESCO World Heritage Site is one of the most beautiful Hungarian settlements, the beauty of which I can’t get enough every time I visit here. Nograd county, however, has much more in store for visitors than Hollókő. In my previous blog post, I have already presented special places from the county (you can read HERE). Now I collected 10 additional places you must see from the beauties of Palócföld. 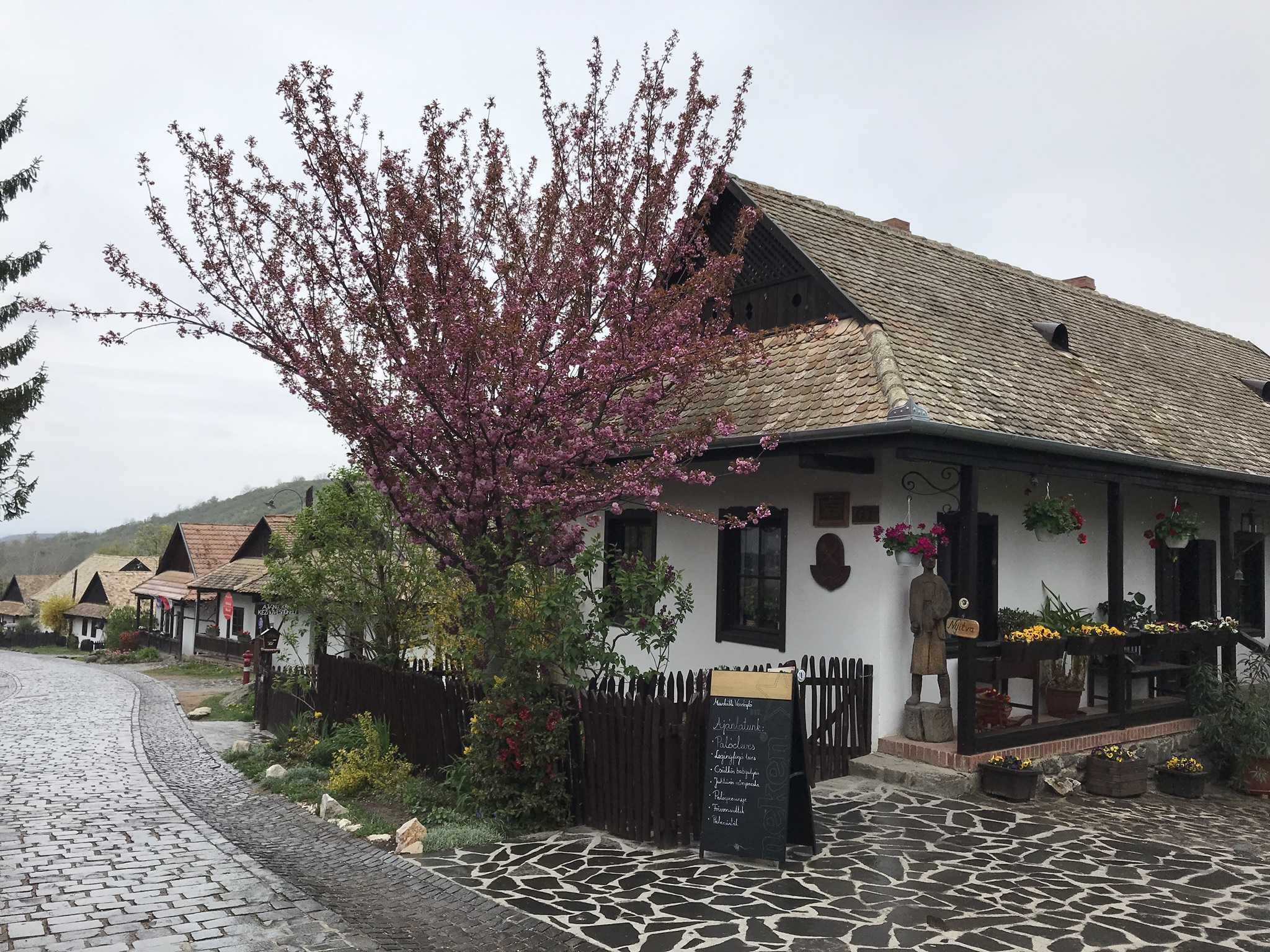 Kéz Lookout Tower in Felsőtold, which was opened only a few months ago, became a favorite of hikers at a tempestuous speed; if we take the palette of special Hungarian places. The hand protruding from the ground offers an astounding sight on the outskirts of the tiny village of Nograd. The installation, true to its name, also offers a beautiful view of the slopes of Cserhát. 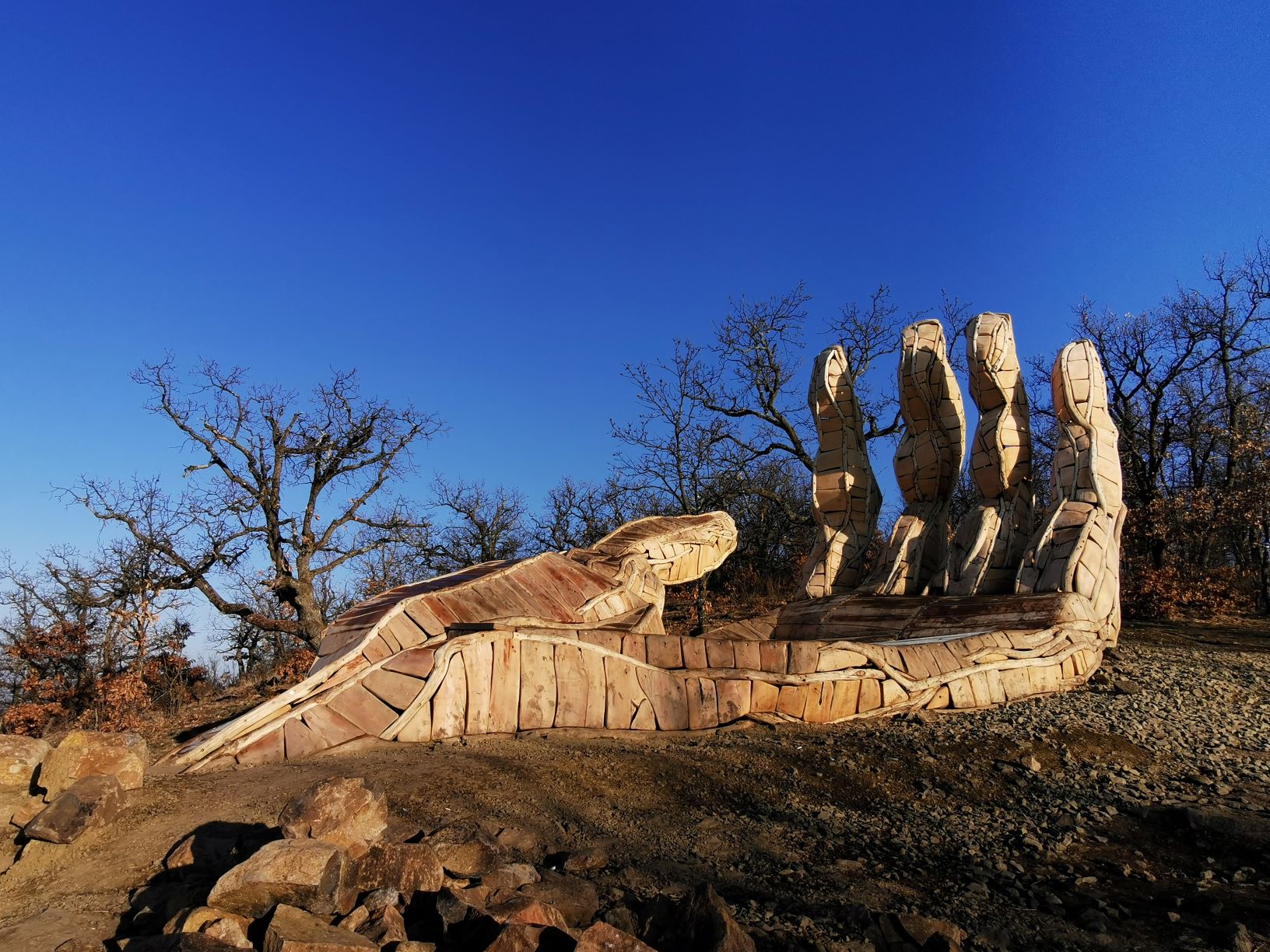 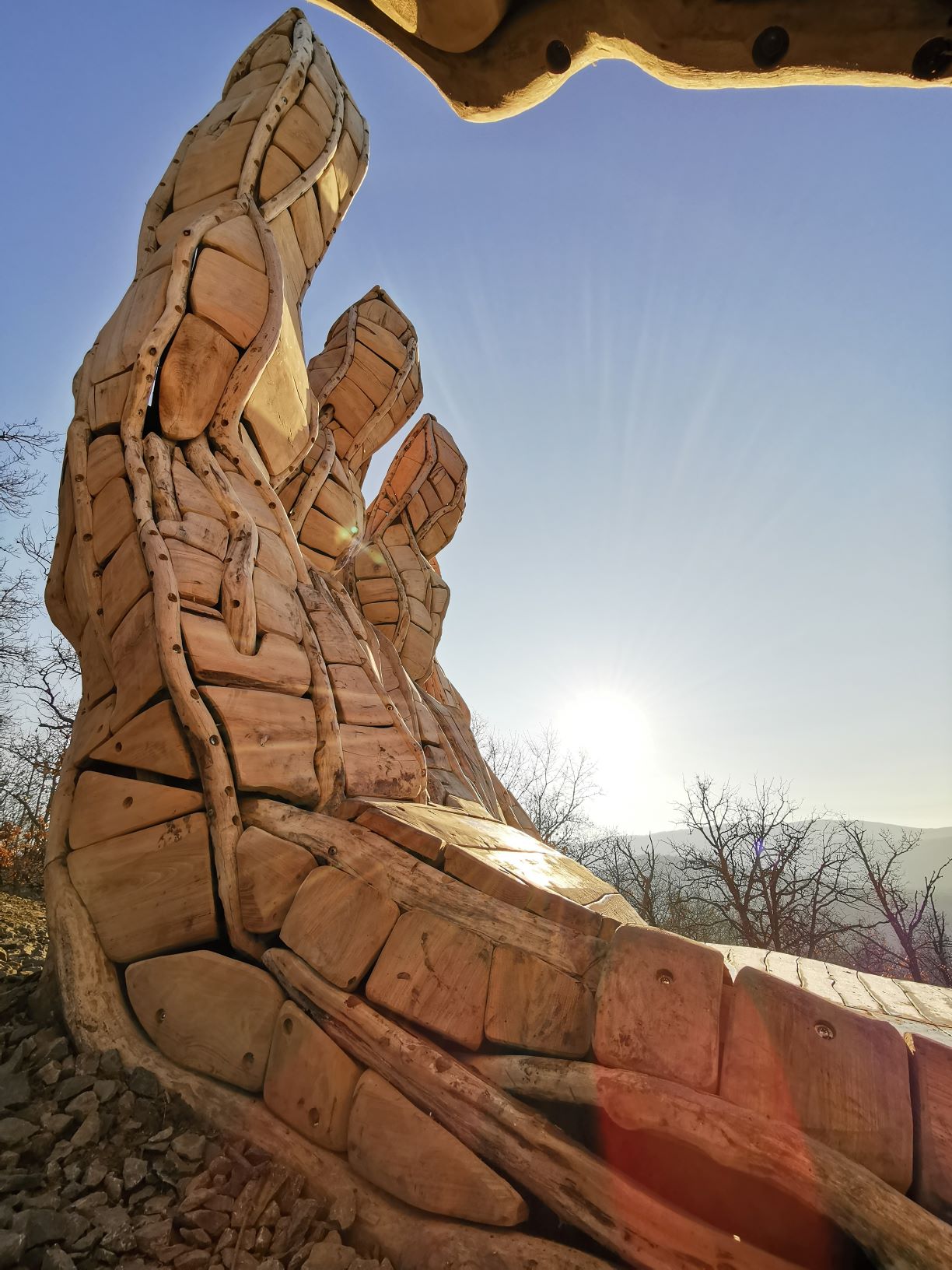 How adventitious Kéz Lookout is, or not, is something to argue about, but I really liked it. As a spot on the national blue hiking trail, it was also a priceless place to enjoy my breakfast sandwiches and coffee. The specially designed lookout tower praises the work of Benjamin Csíkszentmihályi. If you are in the vicinity of Felsőtold and the Kéz Lookout Tower, it is also worth exploring Hollókő. It is only an hour’s forest walk along the national blue trail from here. I wrote about the sights of Hollókő in my earlier blog post, HERE. 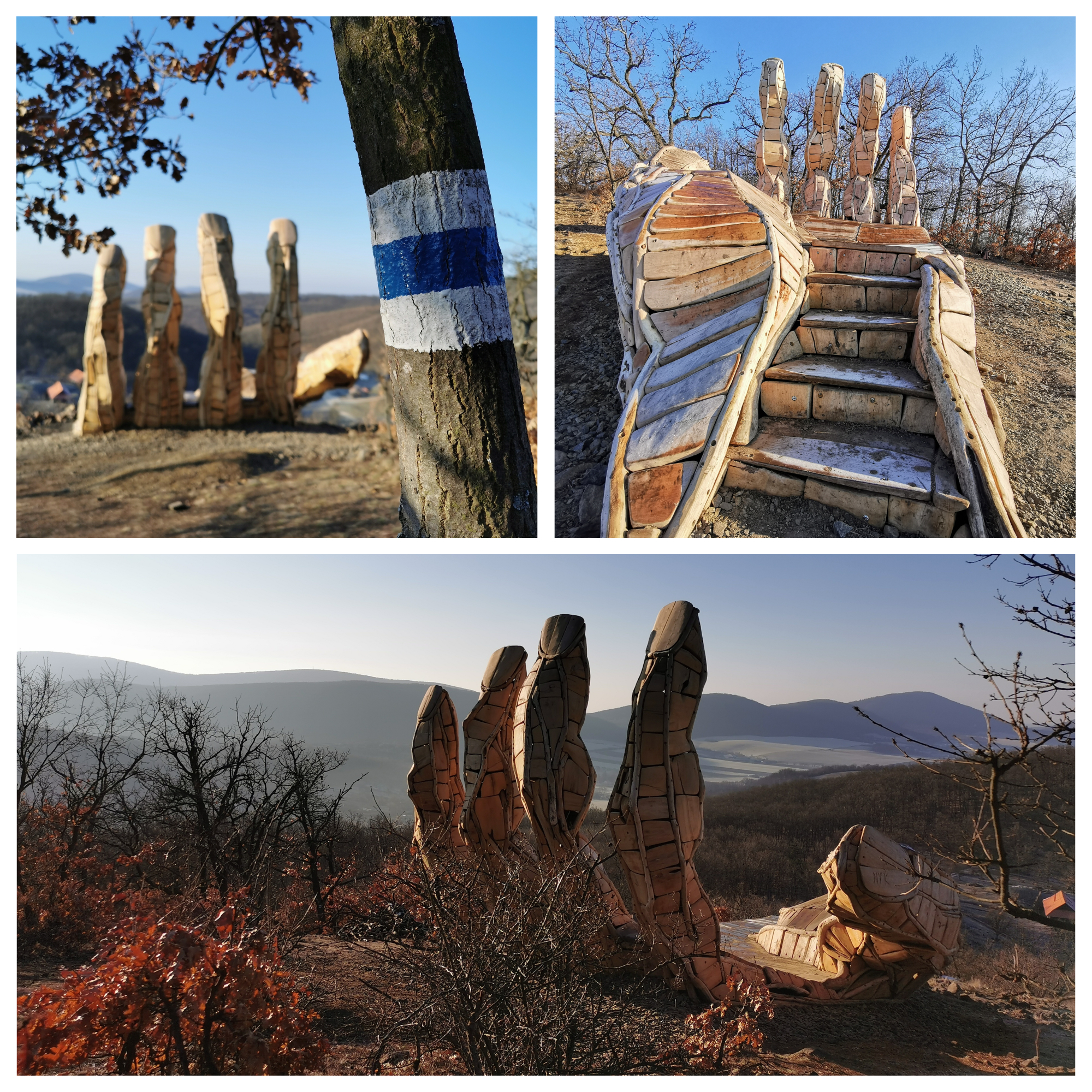 On the outskirts of Szandaváralja, on the national blue trail, you find a beautiful ruin castle at the top of the 527 m high Vár Hill. On the way up to the castle you pass the Chapel of Mary. Its interesting feature is that the blessing statue is dressed in red at Pentecost, black in Lent, and red on the Feast of Mary. The spring on the side of Szent Péter Hill is also a popular pilgrimage site. 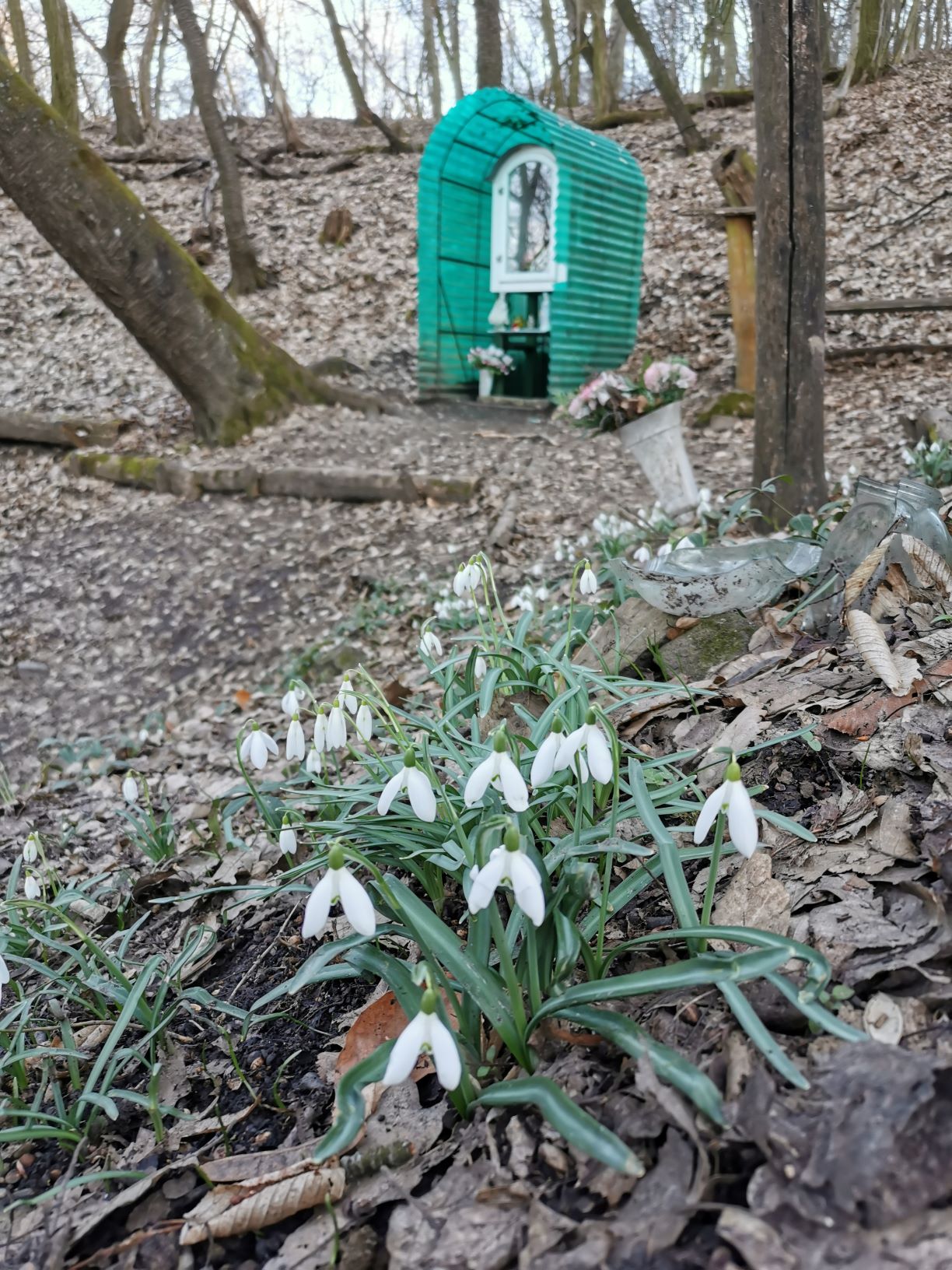 The castle of Szanda was built after the Mongol invasion and there is not much left of it today. But the 7-8 m old tower is still proudly an indication of the importance of the castle, which was once seen in brighter days, accompanied by an interesting legend. During the Turkish occupation, a Hungarian prisoner dropped his bucket into the well of the castle. He climbed down for it and found a tunnel. After successfully escaping from prison, he called for reinforcements to retake the castle, which happened in 1551. 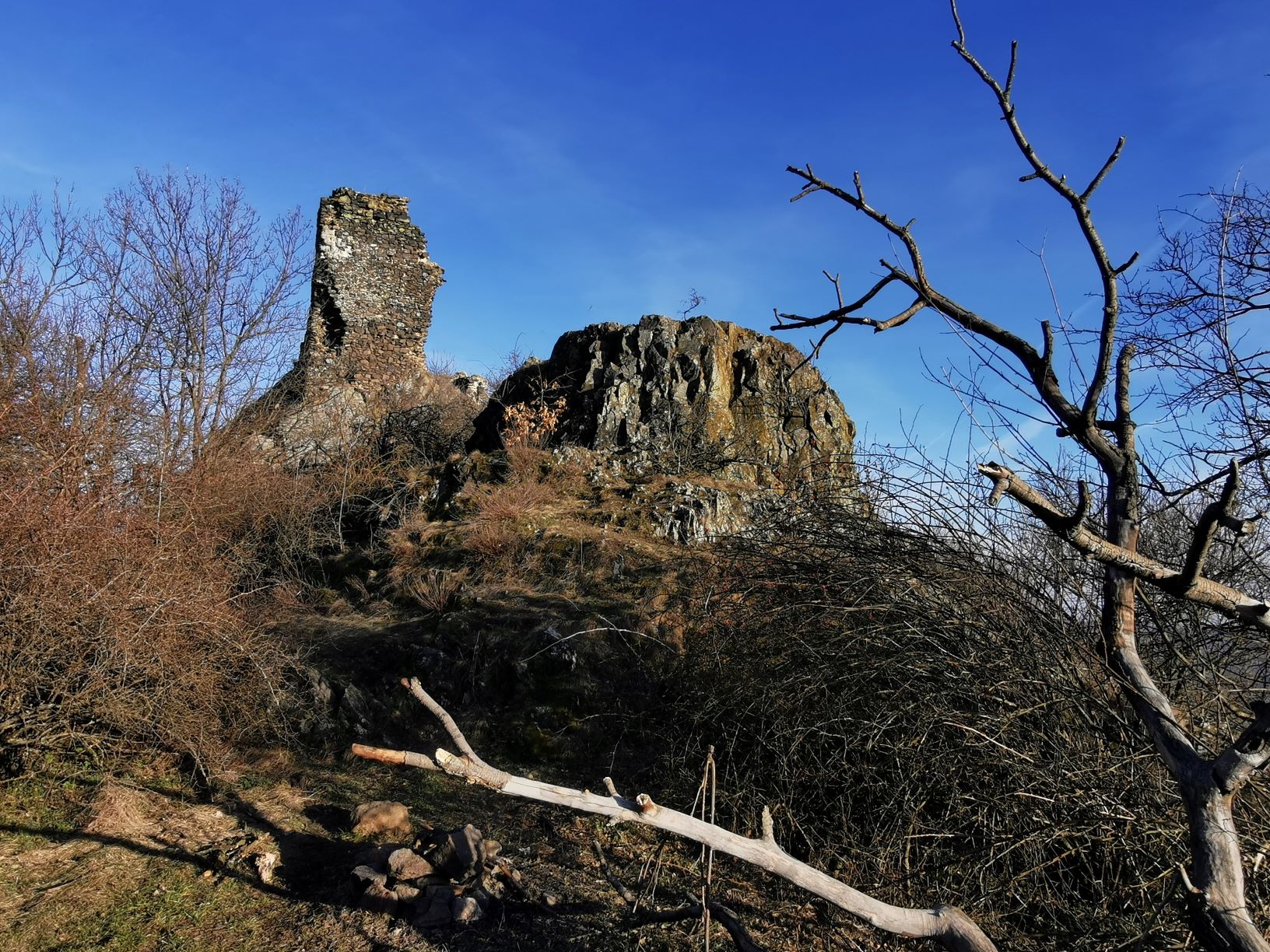 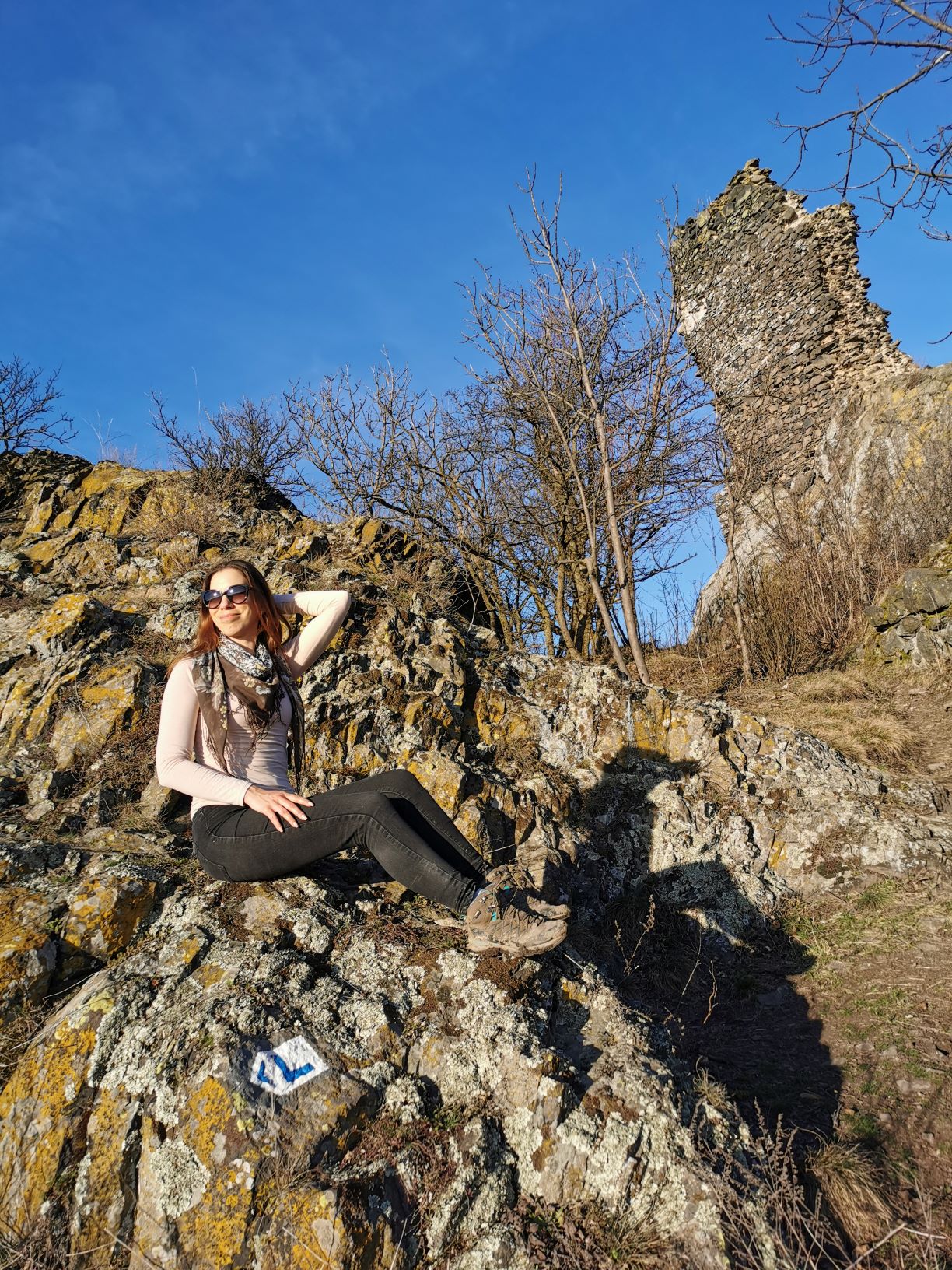 But the Hungarian troops were unable to protect the castle from the Turks, so they blew it up. From the top of the ruin castle, you can enjoy fantastic views of all of Palócföld and its infinity. Standing here on the edge of the cliff, you can really feel the sense of freedom. At least that’s how I felt. 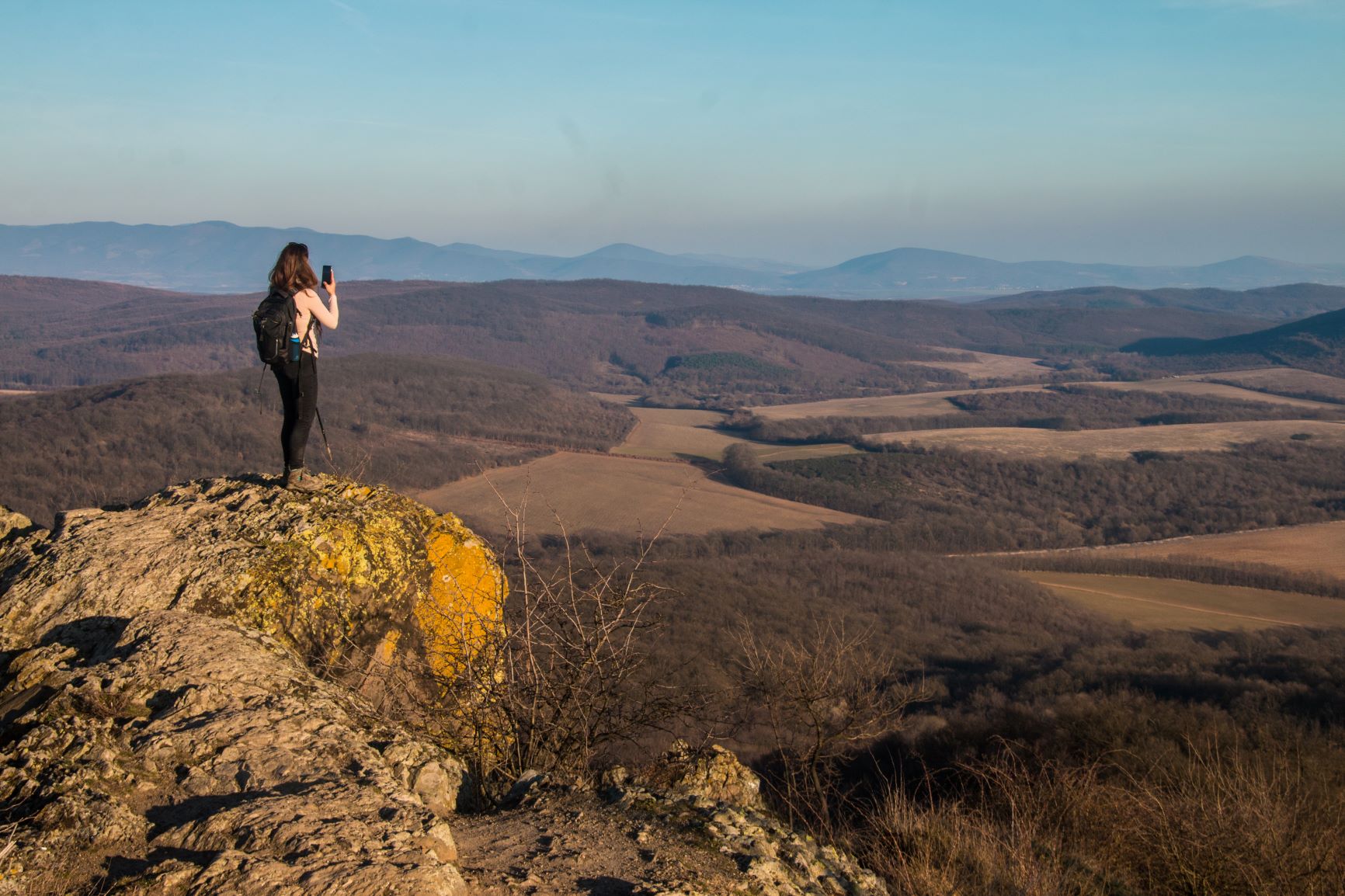 On the outskirts of Bujak, on top of the 466-metre Sasbérc, stands this beautiful Bavarian-style tower. It owes its special appearance to Count Pappenheim Szigfrid, who built it in 1910 at the request of his wife. The count and his wife lived in the ground floor of the two-storey lookout tower, while the upstairs was occupied mainly by hunters during their hunts in the forests of Nógrad.

The tower was completely renovated in 2017 and today, as the highest point of Cserhát, it offers a beautiful panorama. In clear weather, you can see the Tatras alongside Börzsöny and Mátra. The lookout tower can also be reached by car, all the way to the gates, making it easy to reach with children too. Or if you prefer to go hiking, you can walk from Buják to Sasbérc on the 7 km long green oak leaf path. I was here off the season (April – October) so unfortunately I couldn’t see the building from the inside. But I’m sure the Sasbérc lookout tower is one of the most special towers I’ve encountered in Hungary, so I’ll be soon back. 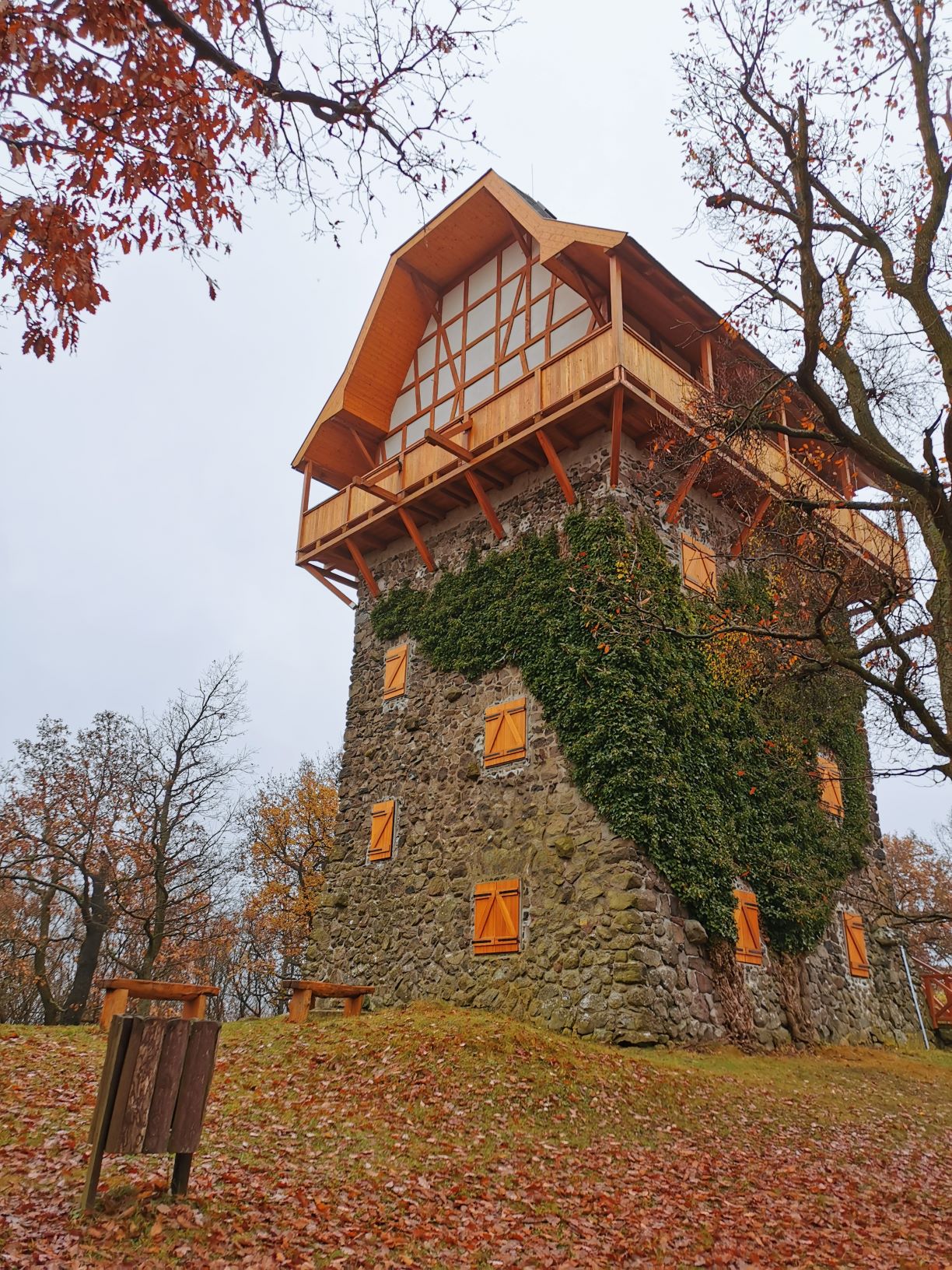 Stupa of Enlightenment in Becske

There are several Buddhist stupas in Nógrad county, of which Buddha Park is a nice place to visit  (check HERE).  The Stupe of Enlightenment stands on the national blue hiking trail in Becske, at the top of Csiga Mountain, and can be visited free of charge at all times of the year.  At the top of the stupa there is a gilded Buddha statue and represents his enlightenment at the age of 35. 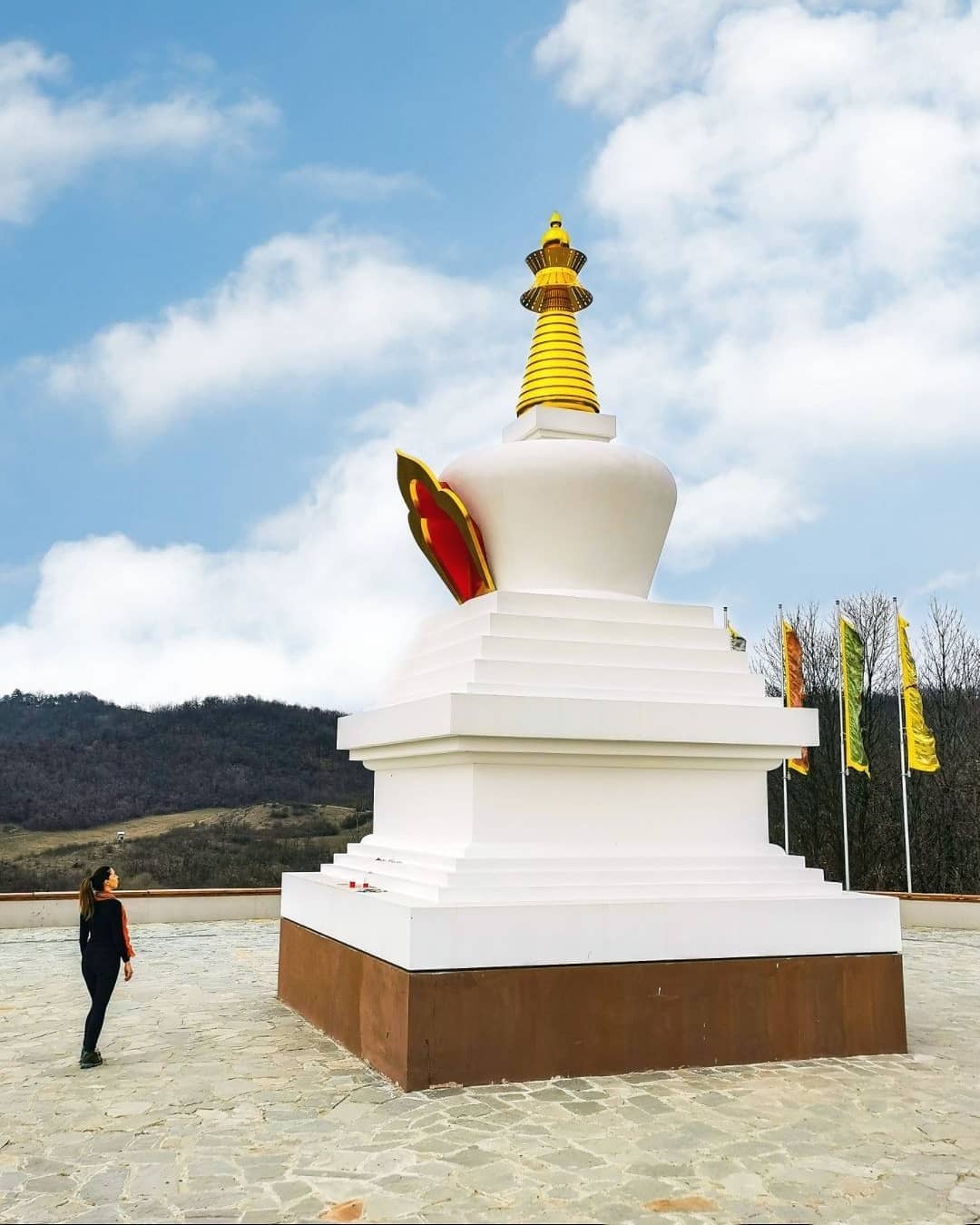 On the hillside behind the shrine, there is a recreation center, while the square is framed by a garland of prayer flags. According to Buddhist traditions, prayer flags, in contact with the wind, pass on the energy of the prayers and mantras on them. It is believed that if the wind blows the flag, the surrounding square will be cleared. The other tradition is to walk around the stupa. Let’s do it three laps on the right side and express your good wishes while walking. 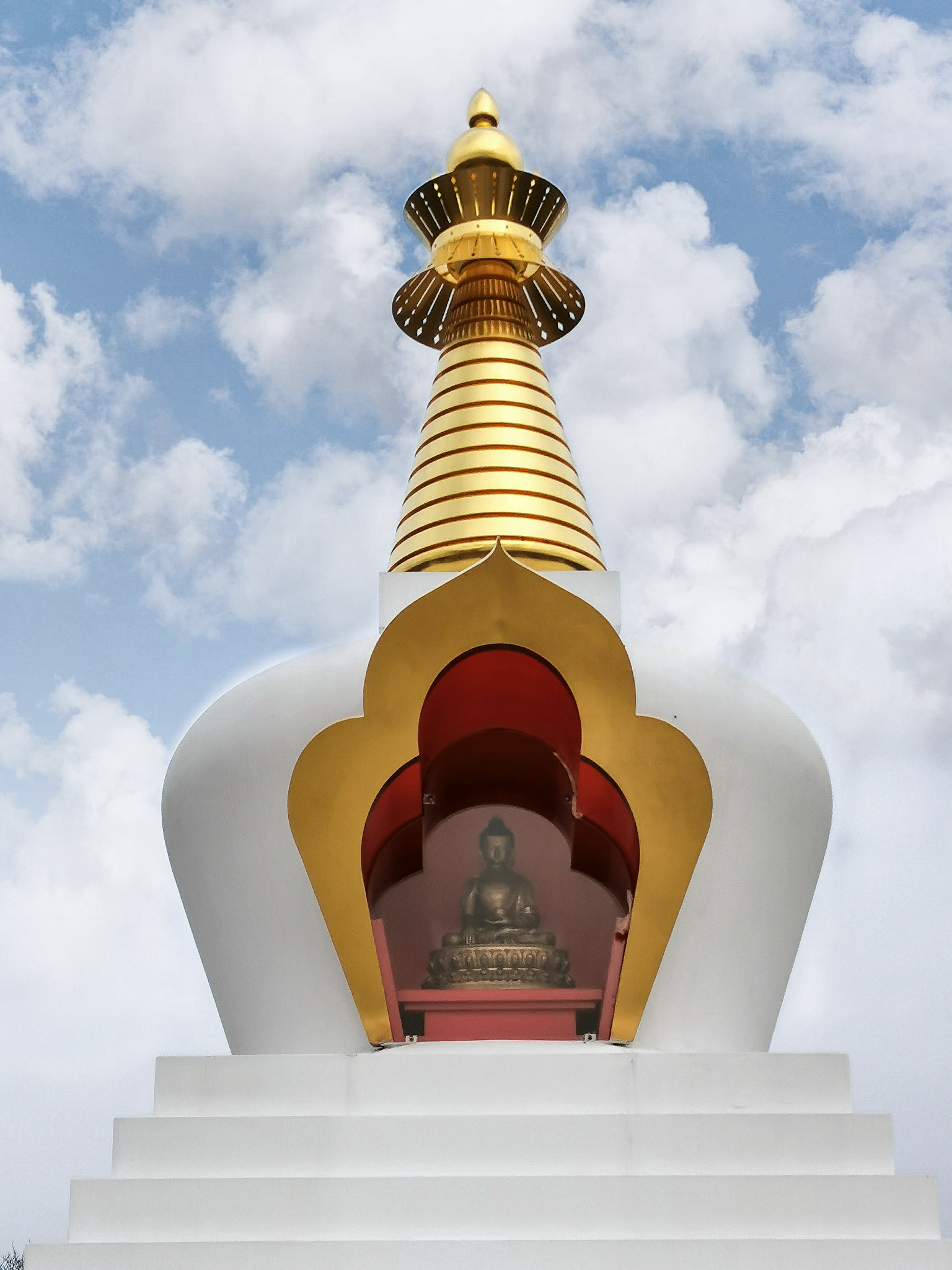 The castle of Nógrád is located in the name-giver Nógrád settlement, which has been populated since the Hungarian Conquest. The exact time of the castle’s construction is not known, but it is likely that the construction of the stone castle began in the 12th and 13th centuries. The irregularly shaped inner and outer castle was an important center of the Highland defense line in Turkish times. It changed hands several times: it belonged to the Turks, the king, and even the Prince of Transylvania. In 1685, a lightning strike blew up the tower, and it has been destroyed ever since. 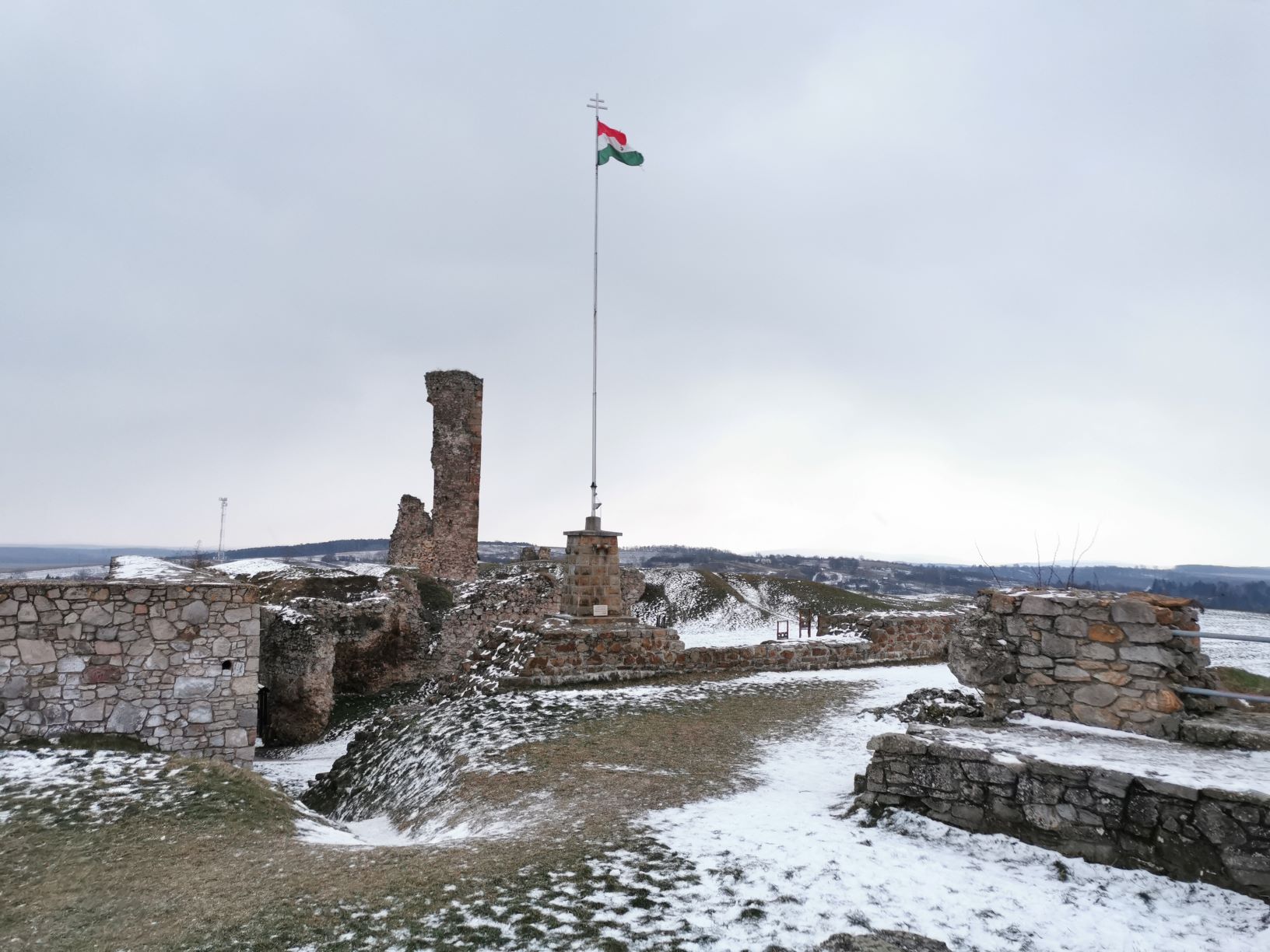 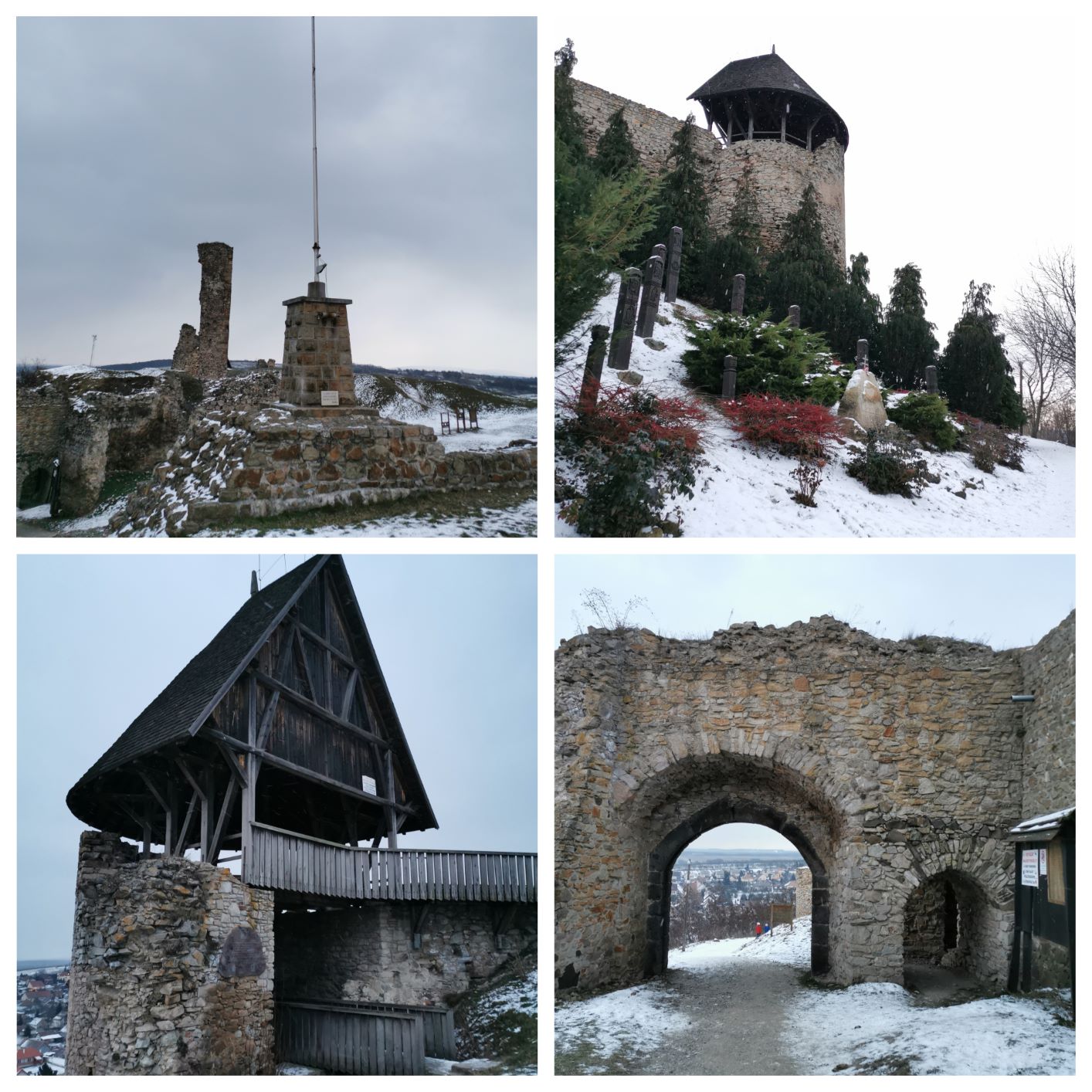 The castle is free to visit and is an enjoyable sight for children and adults alike near the Börzsöny Mountain. If you have plenty of time, you can also take a hike on the national blue trail to Csóványos (938m). From the top of the mountain, you can enjoy magnificent views of the surrounding the High Tatras and Danube Bend. 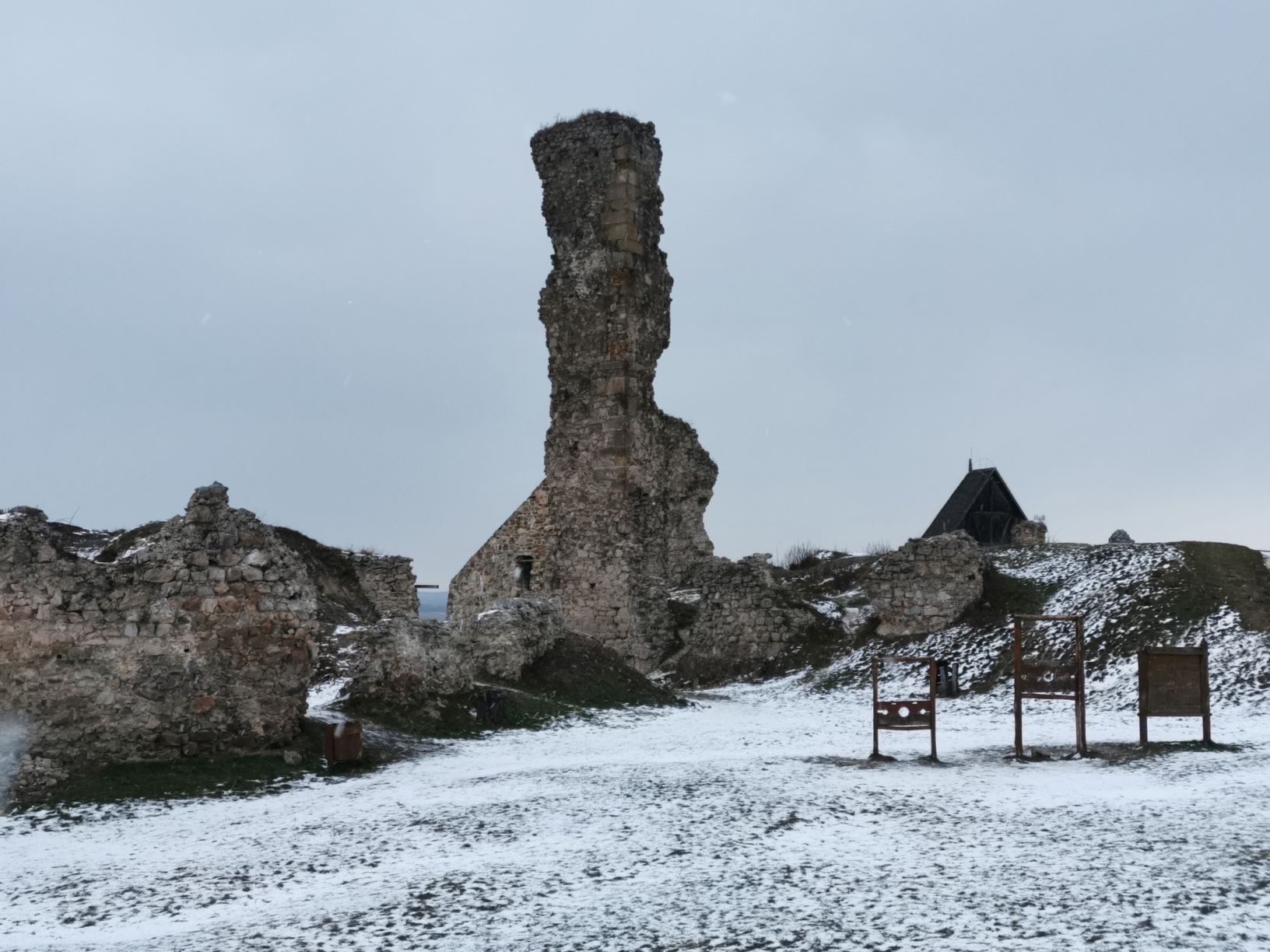 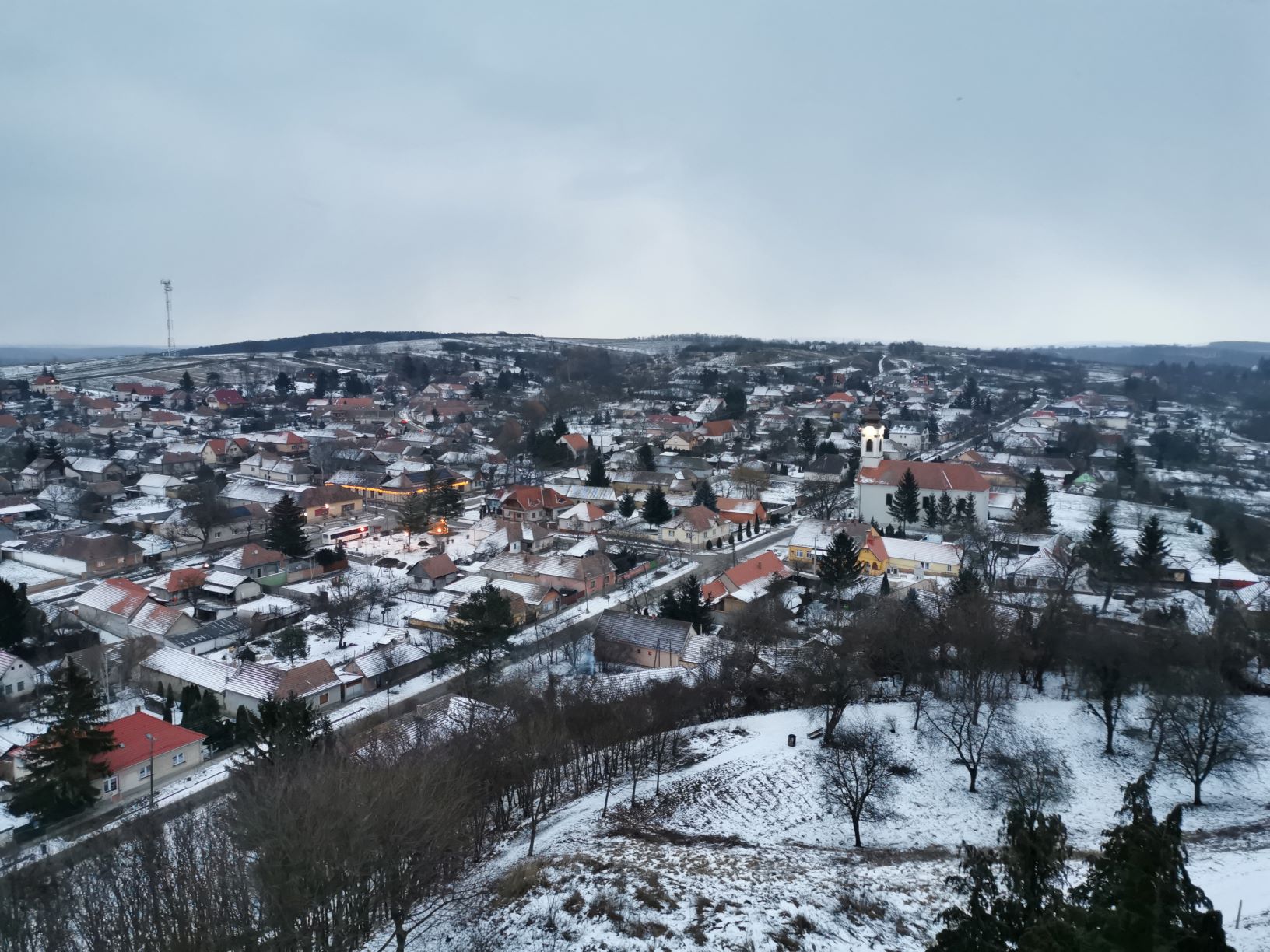 This lookout tower at the top of the 421 m Romhány Hill, which was opened in 2017, is a special sentinel of Cserhát and Palócföldföld. By climbing 128 steps, you can gaze through the endless landscape. With binoculars, or even with the naked eye, you can easily identify the reliefs of the Visegrád Mountains and Pilis, as well as the peaks of Naszály, Mátra and Börzsöny. However, the Prónay Lookout Tower is interesting not only because of the panorama. On the observation levels you can get an insight into the cultural and historical heritage of the Cserhát Mountain and Palócföld with the help of well-detailed information boards and photos. 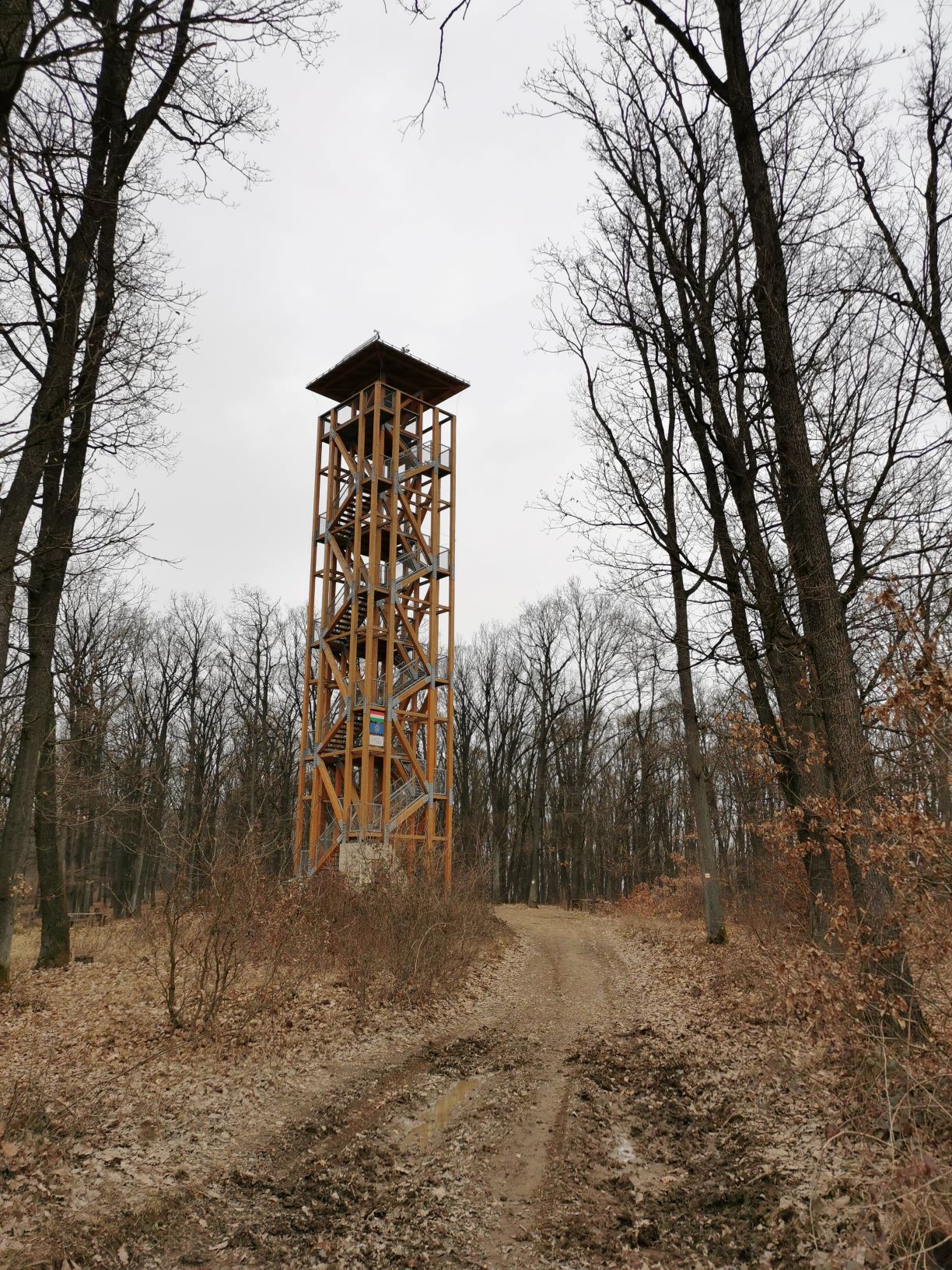 If you are here, it is also worth exploring the surrounding villages, such as Alsópetény, where you can also visit the baroque-style castle of the Prónay family. As an interesting fact, according to traditions, István Werbőczy also wrote his famous collection of laws, the Trinity Book, here. 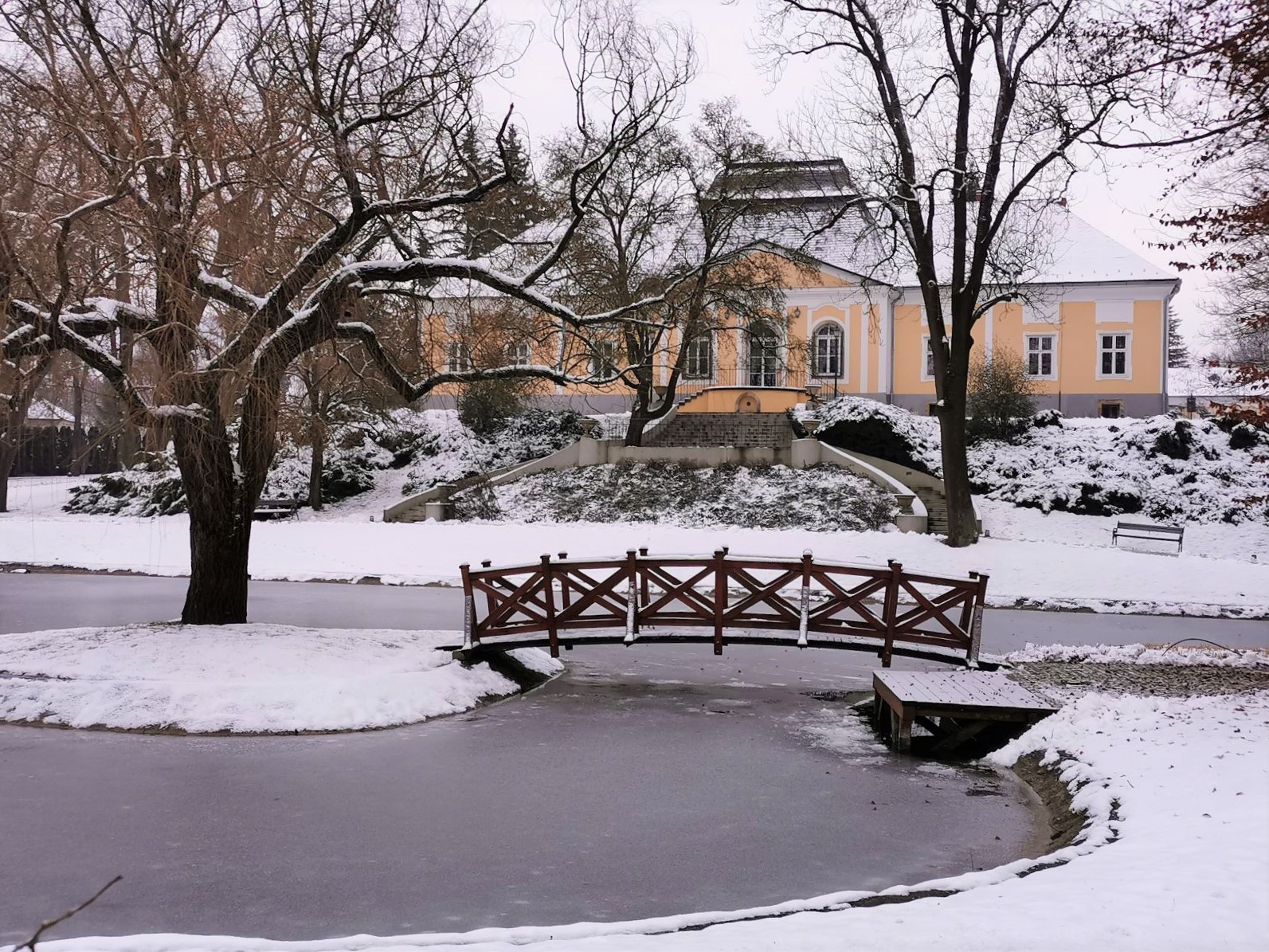 The special sight of the village in the Valley of Kis-Zagyva is the nature-protected quarry. The geological formation, which is also a rarity at European level, is located right on the edge of highway 21. In the huge rock wall, you can clearly see the layers of 1200-degree lava flows as a result of the volcanic eruption, as well as the remnants of shallow sea sediment. At the quarries of Sámsonháza, six small plaques explain visitors the ancient volcanic activity. From the Csűd Hill on the other side you can enjoy the most beautiful view of the mine. For me walking on the undulating hills was also a great experience. 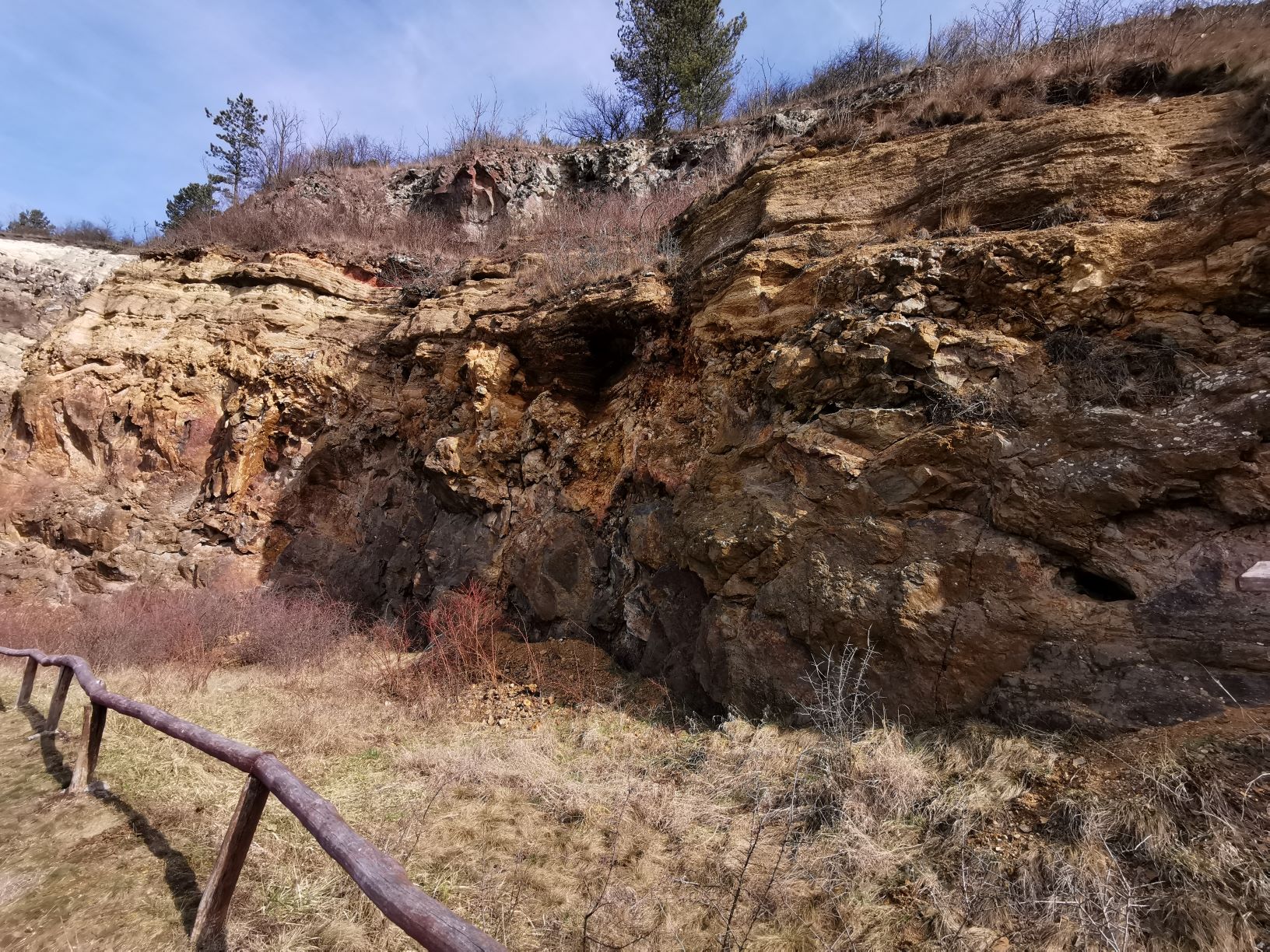 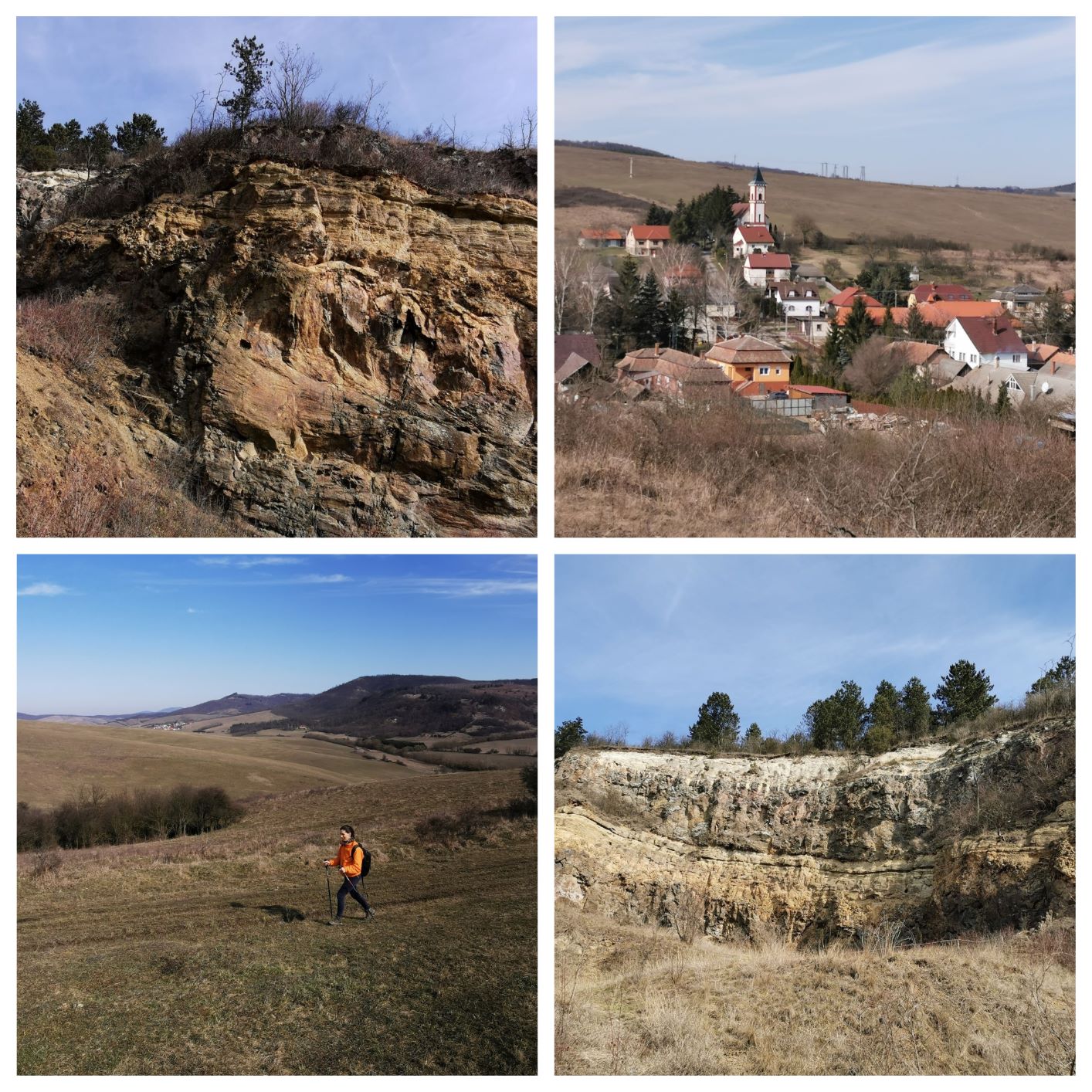 Palócföld boasts many lookout points, but Tepke Lookout Tower at the highest point of Cserhát, at 567 meters, is a real delicacy for those who look for a panorama. The multi-story tower, renovated in 2001, has a full circular panel opening in all directions. From the west, the circle is opened by Börzsöny, then the Danube Bend, Buda Mountains and. In clear weather the Great Plain appears also in the field of view. 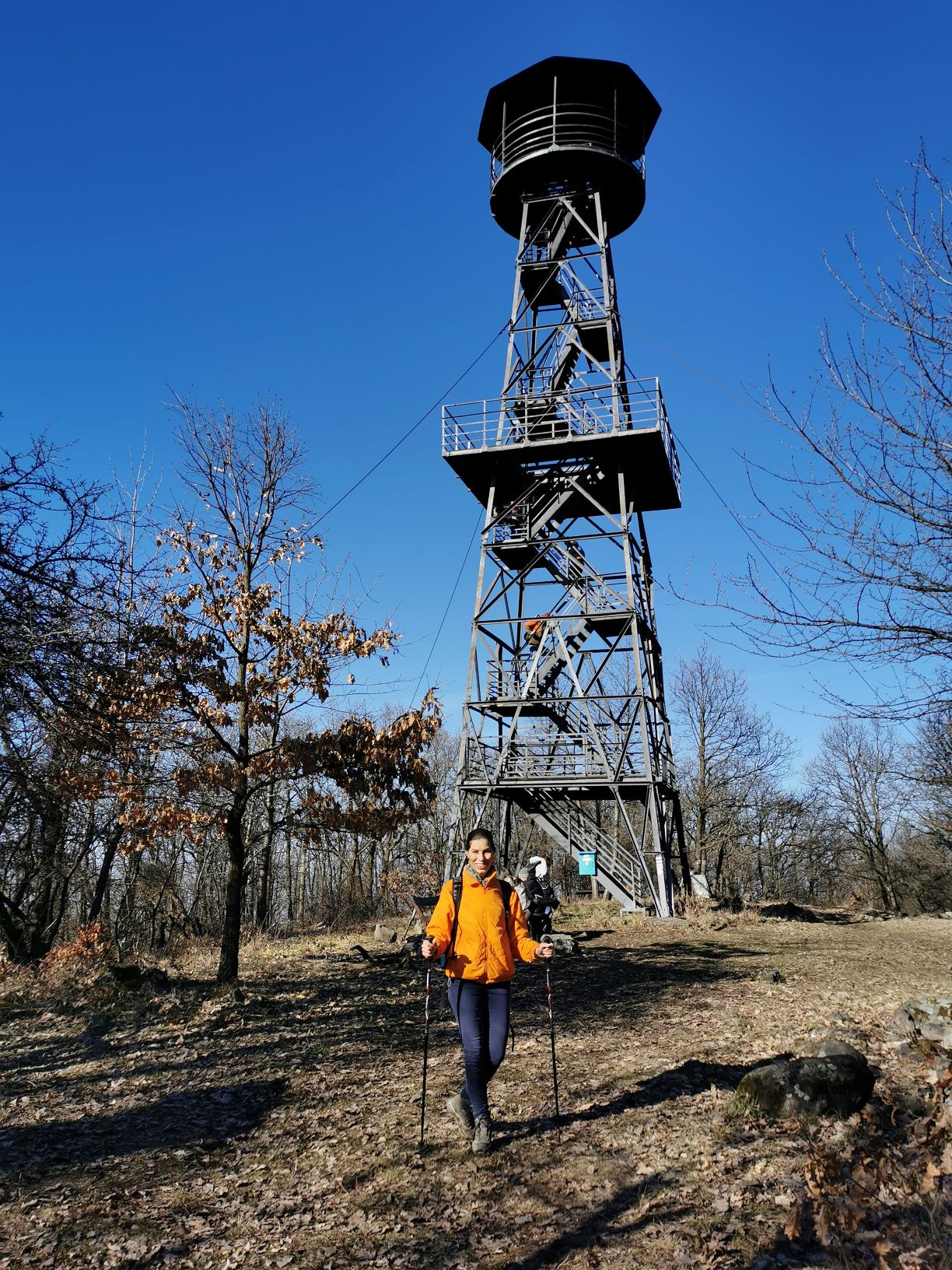 In the east side, you can see the huge block of the Mátra with Kékes, while in the north the walls of the Castle of Hollókő can be found among the slopes. The Tepke Lookout Tower can be easily reached on the national blue trail from Bableves Tavern. Tip: at the end of the day you can taste delicious Hungarian goulash and cabbage noodles here too.

Interestingly, we have not much data on the formation of most castles in Nograd county. Thus, we do not know much about the construction of the Buják Castle. It is certain that if there is an abandoned place in Palócföld, then this is it. In the 1300s it was mentioned as royal property. Over the centuries, the castle had many owners, most not least the Turks, who in 1666 blew up the otherwise not important castle with gunpowder. It is a pity that the restoration of the castle has not been done since then. Even though it was once magnificent from contemporary descriptions. 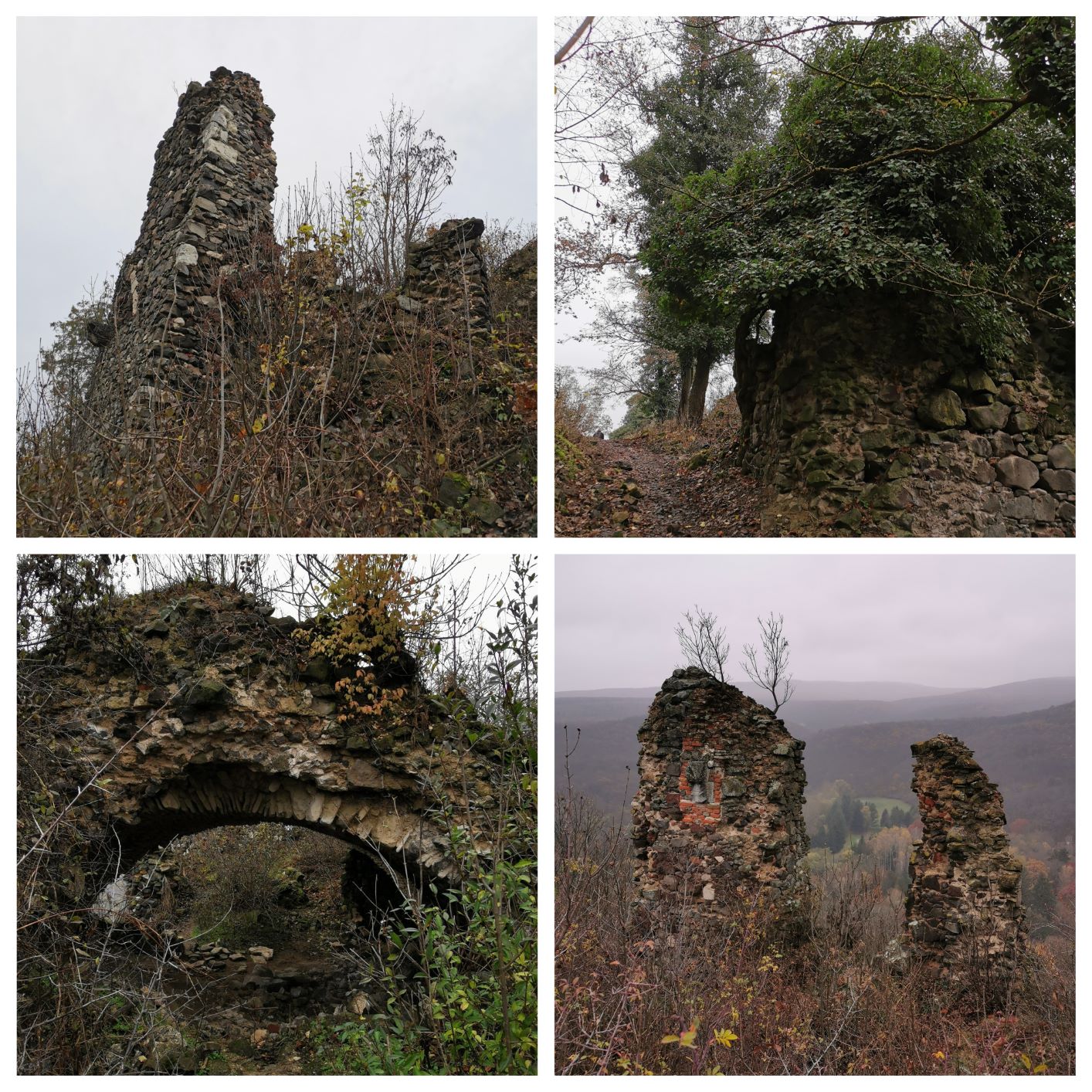 Evlia Cselebi, the famous Turkish world traveler, wrote about it. “There are 300 houses in the castle, the only church is a mosque. There is a big well and its water is still cold during the month of July. The castle has a deep prison to descend on.” It is said that the walls of the Turkish mosque can still be discovered on the castle grounds, but I have not found them. However, visiting the castle in a wild environment can be a special colour spot for your excursions to Palócföld.

During my hiking on the national blue trail, I came to this place, which immediately stole into my heart with its child-friendly design, varied and informative nature trails. During the 5 km long tour, which can be explored in winter and summer, you can get an insight into the life of the forest. You can walk along the valley of Lósi stream on a plank and discover Hungary’s longest pedestrian suspension bridge. If you are looking for high ground, you can climb the nearby towering Naszály Mountain (I wrote about it HERE), while at the end of the day you can make a stop at the “Rest of the Giants”. 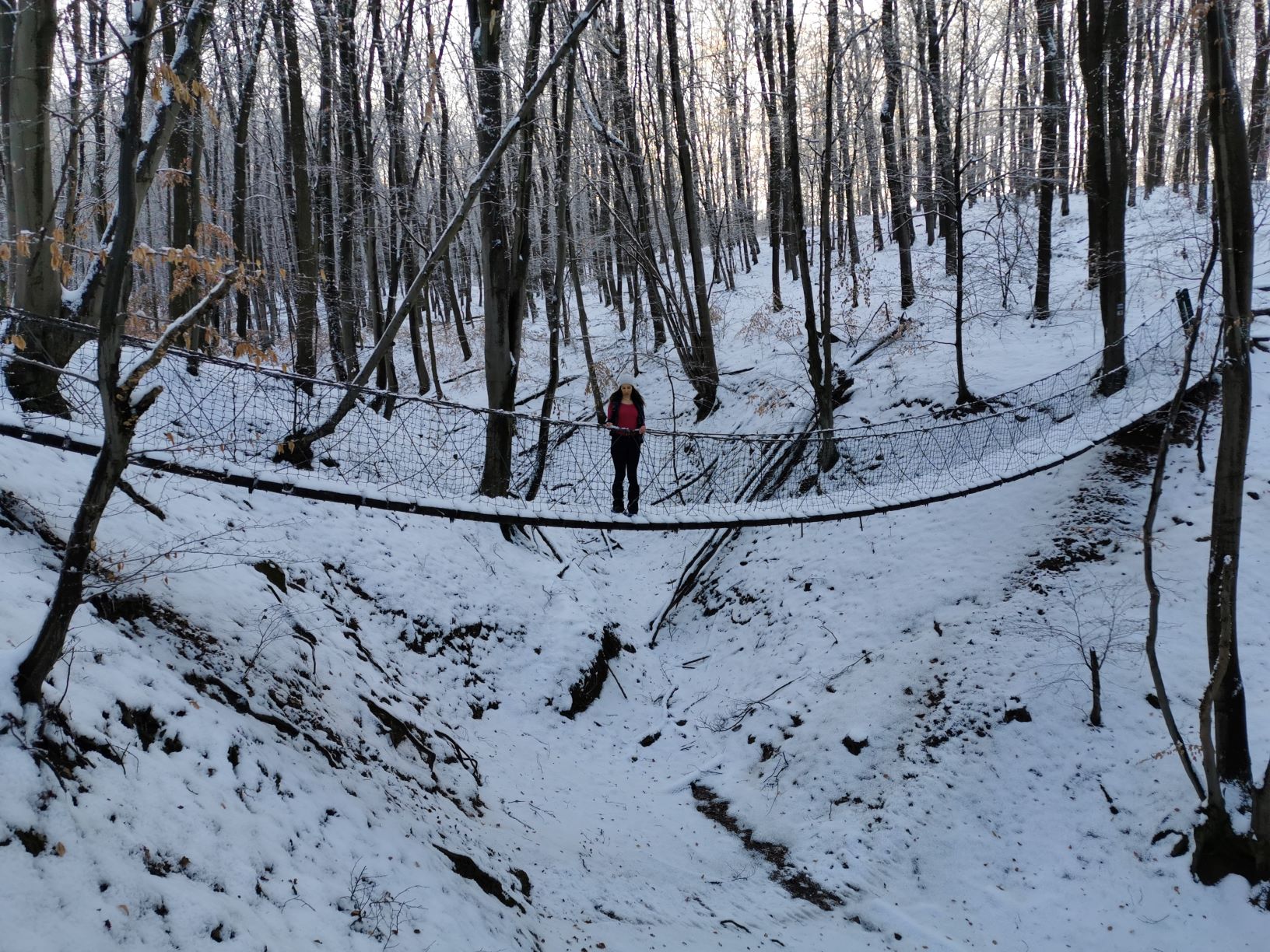 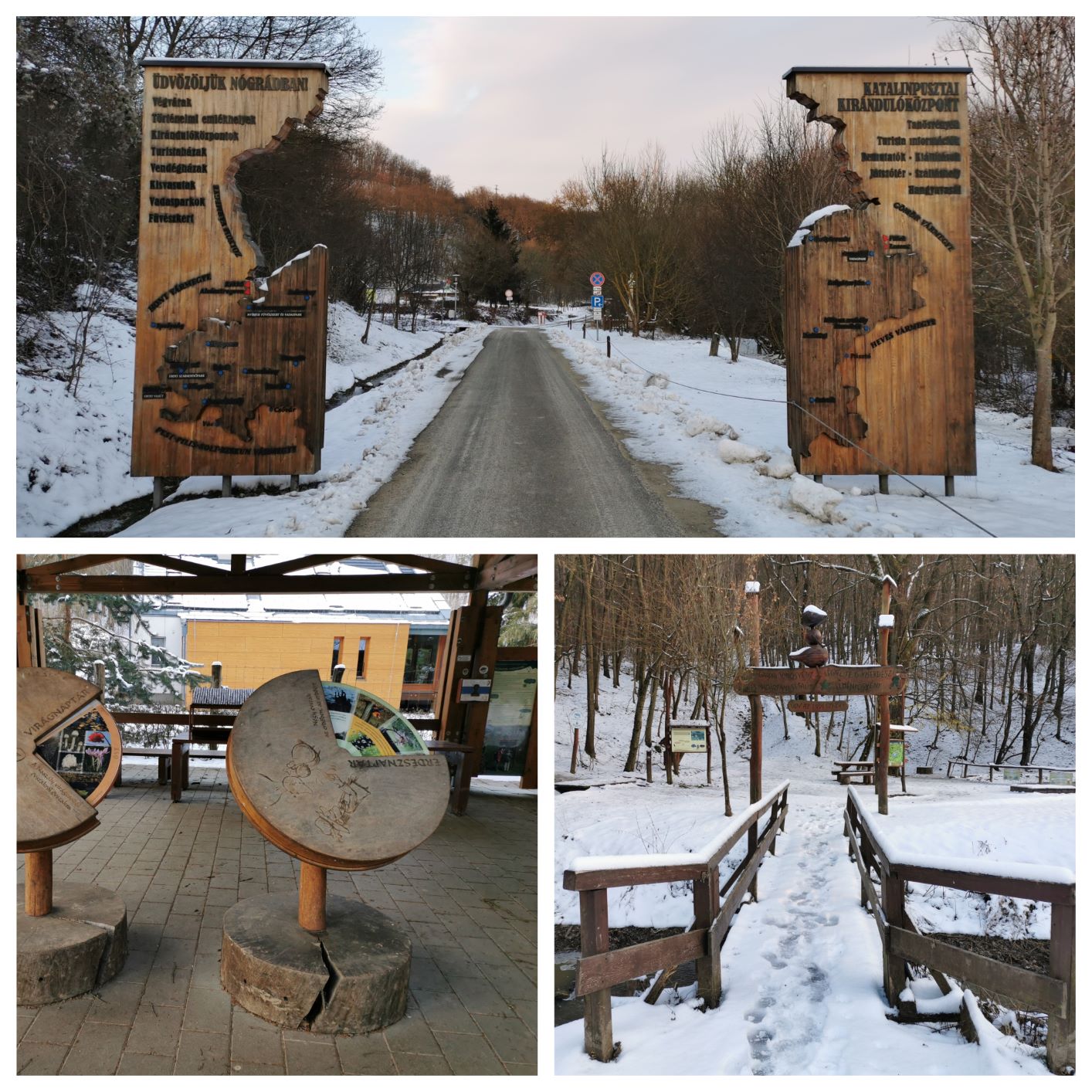