Amazing caves of Budapest you find under the city

Most people don’t think of caves as attractions or sites they should visit. They are damp and dark and have all sorts of weird things like bats. Likewise caves and bats don’t have good marketing. Furthermore, these places were home to cavemen. Why should we go somewhere where there are just stones? 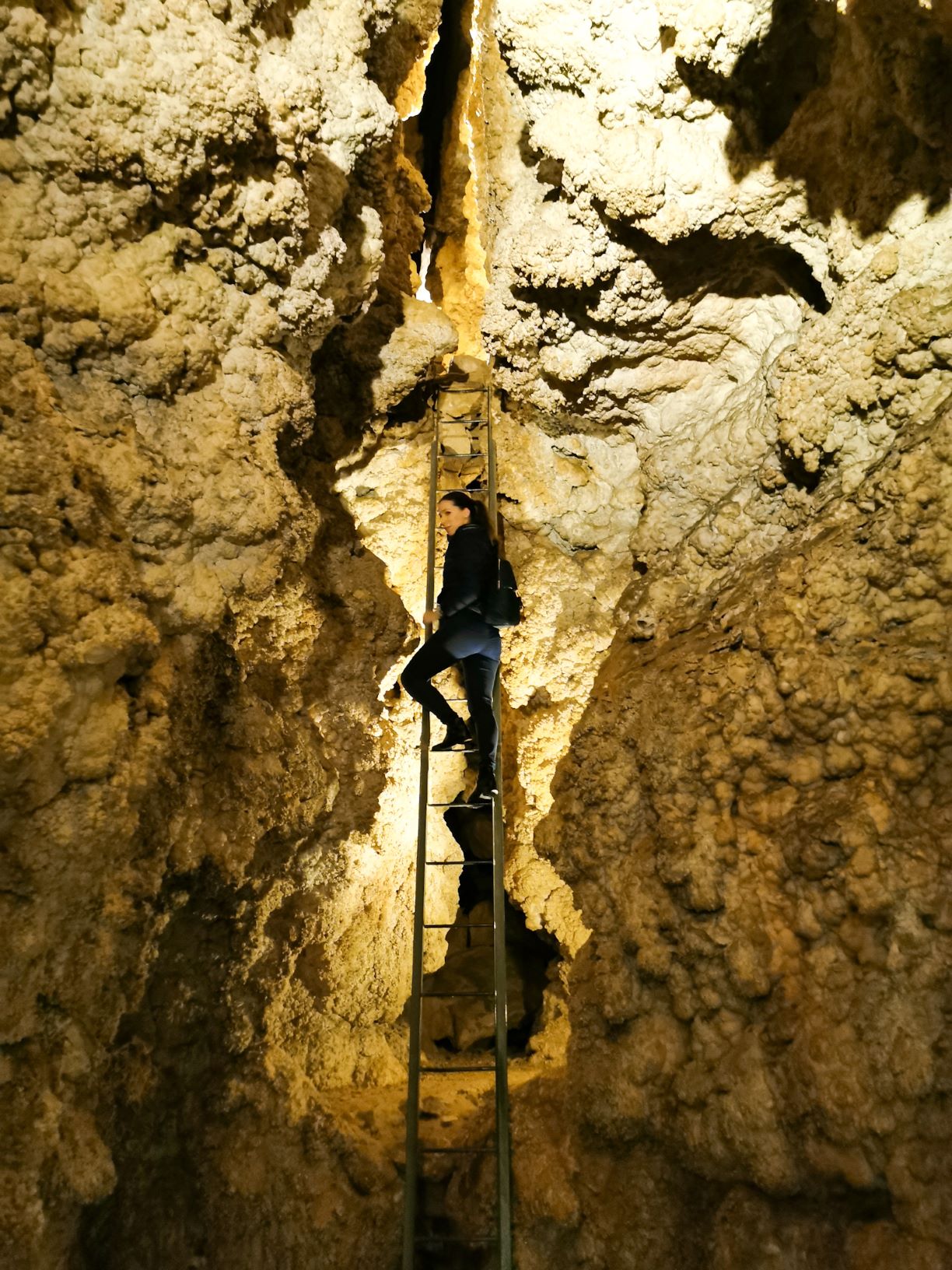 That’s pretty much how I thought about the caves. They didn’t seem tempting. Then, in autumn thing changes. I needed an adrenaline rush and because of the pandemic situation, I felt I must get out of my comfort zone. I had a desire to see something special and explore a new or hidden spot.  Even though I have been living in Budapest for 15 years and I have not shown much interest in underground cavities. Hence, I started the exploration of the famous caves of Budapest. 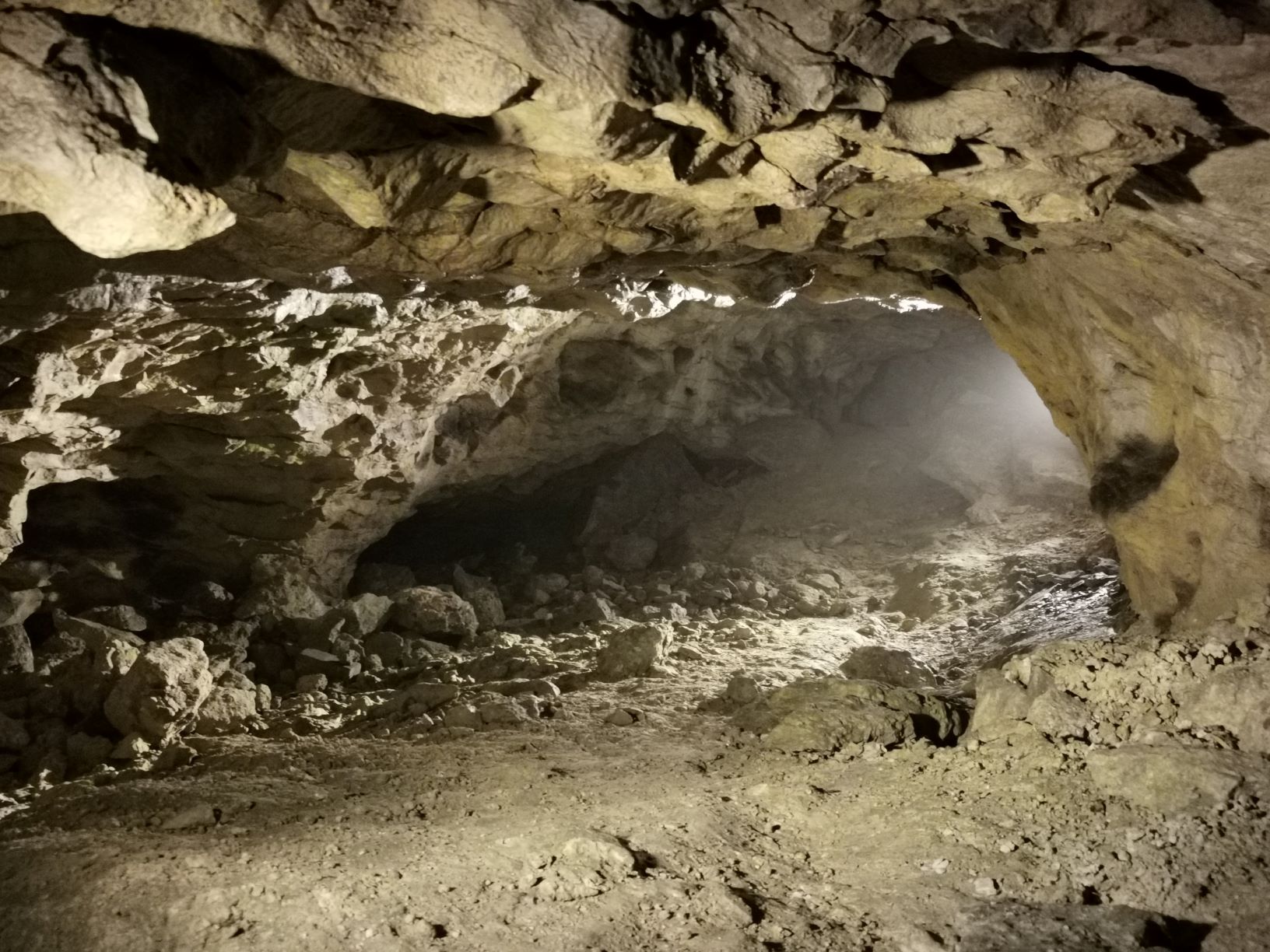 And it was worth doing. I did not know Budapest is the capital of caves. It is the only capital in the whole world that has huge cave systems just under the streets.  These caves are like eye-popping treasures, most of which you can discover as visitors without any cave training. * What makes them so special and what you should know about, I will tell you in this blog post.

To get an answer to that question, we have to go back in time for 40 million years. In the Buda Mountains, consisting of limestone and marl, thermal water broke along crevices. Here thermal water met with karst water, which infiltrated the cavities through the rain. Due to the strong dissolution effect of mixing water with different temperatures and chemical compositions, caves were created. As a reason for dissolution these crevices filled up with water became larger and larger and created a curly labyrinthine system. 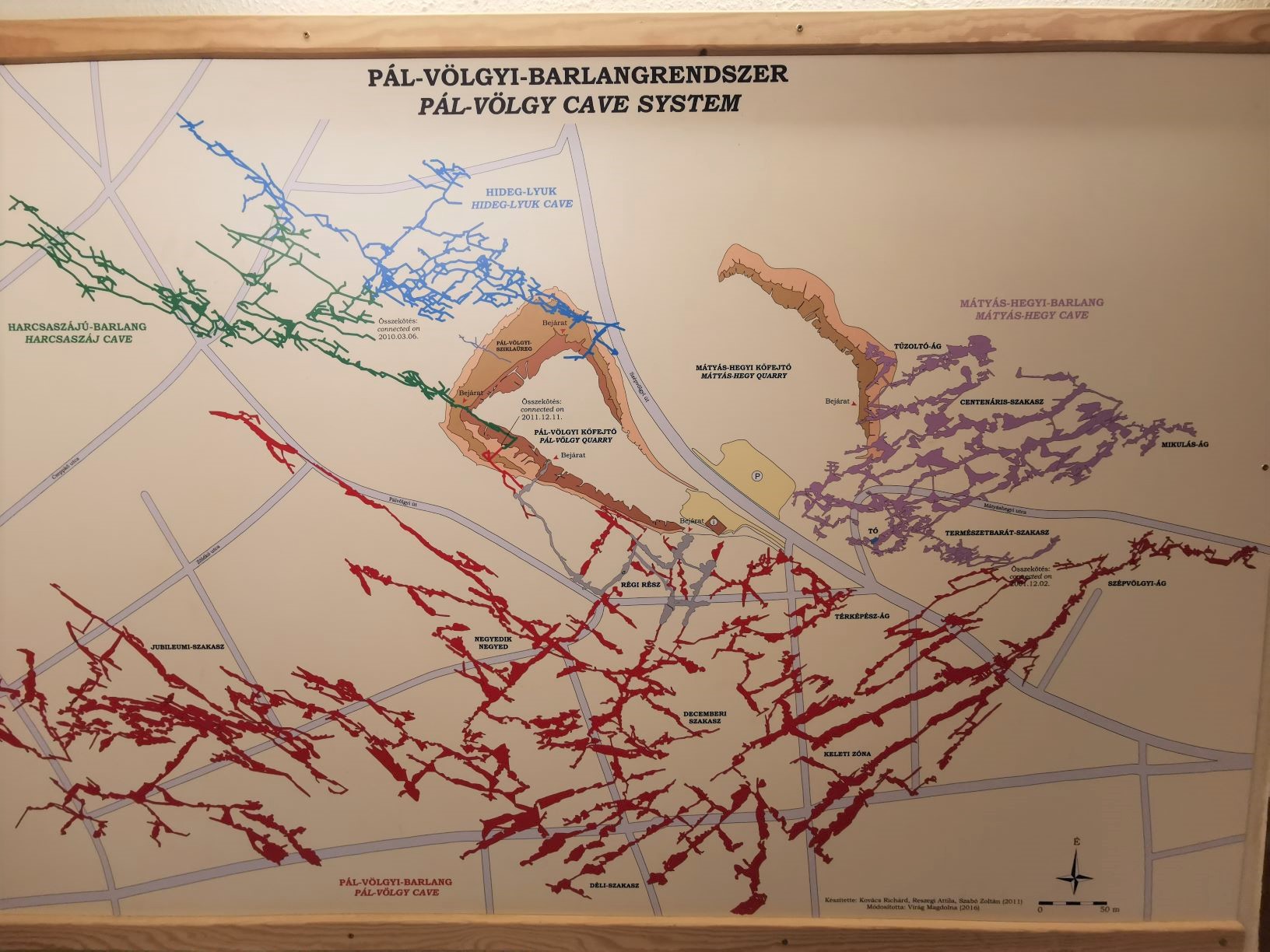 Most of the caves were almost unknown until the end of the 19th century, as they had no natural entrances. Due to human activity, like construction and mining, these holes ripped through, and turned out there is something beneath the earth.

The excavation of the caves is still going on. Today we know 200 passages formed by heat springs that erupted from the depths. The most spectacular caves are in the 2nd and 3rd districts of Budapest and form a more than 45 km long underground system. I have visited the five most famous caves of Budapest of which two were a real off the comfort zone experience.

When you are walking in the Buda district, it is difficult to imagine what life must have been like here in the early 1900s. In Szépvölgy there was once a quarry, from which mainly decorative and building stones were carved out. The fact that there is more here than just stone is linked to tourism. Nearby walking tourists discovered in 1902 that there is stalactite in the garden of the mine guard’s house. By then, the miners had already found some cavities inside the stone mountain. However, the official discovery of the cave was made by Pál Kornél Scholtz and János Bagyura.

Palvolgyi Cave is the biggest cave system in Hungary with an estimated length of more than 32 kilometers. Research is still taking place today – Harcsaszájú-Hideglyuk sections proved to be promising terrains – so it is possible the length will soon expand. 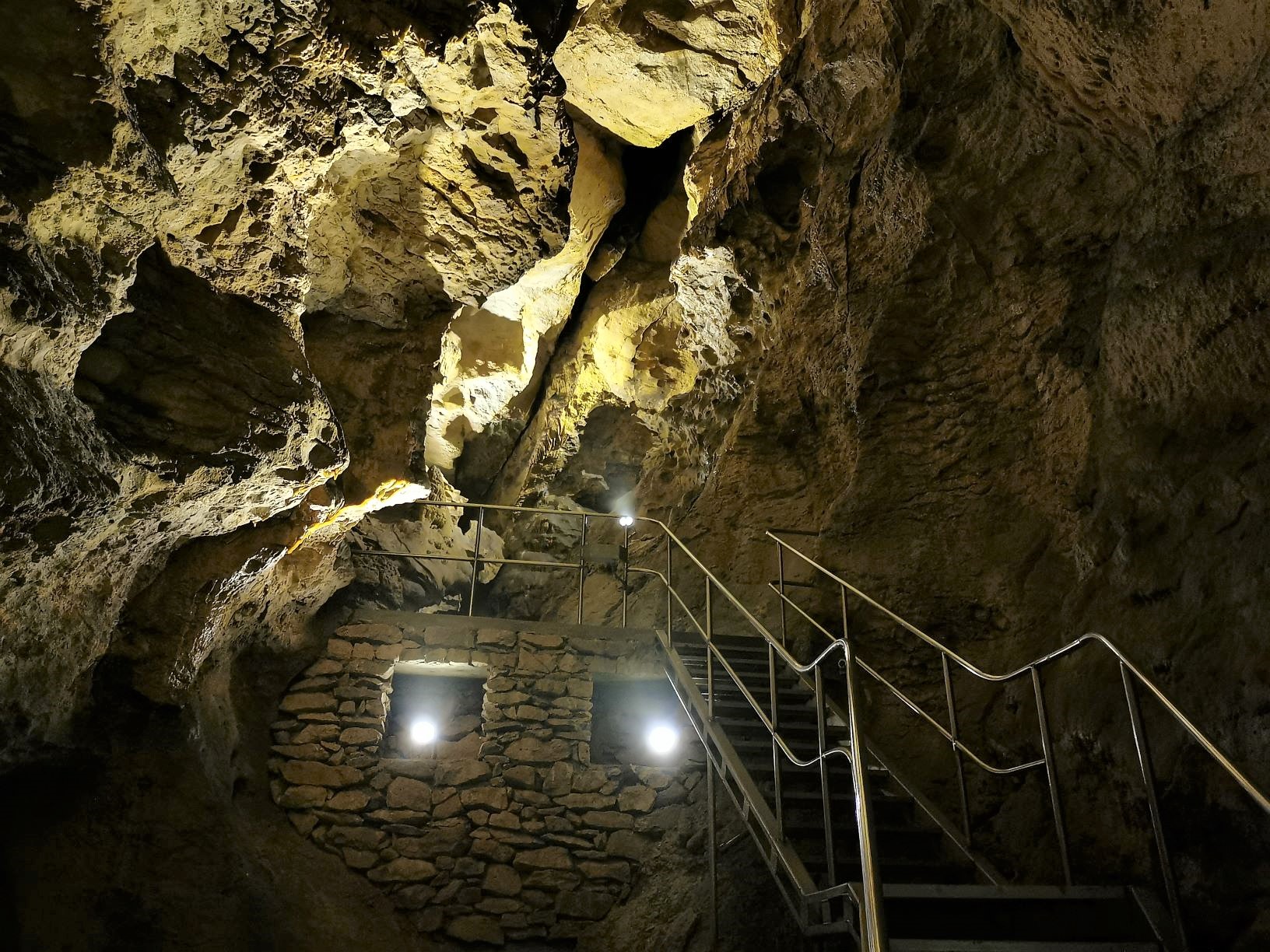 A 500-meter section of the cave can be visited as part of a guided tour. During the nearly 1-hour program, you pass through the corridors as well as you should climb few stairs, but the efforts are well compensated by the sight. During the journey, you can see fairytale-like stalactites, special rock formations formed through the slow work of thousands of years. Snow White and the seven dwarfs are the most special formations of the stalactite, but Witch Kitchen, Mici hall, and dining room also guarantee unforgettable experiences for all ages. More information about the Paul Valley Cave, its entrance tickets, and opening hours can be found HERE. 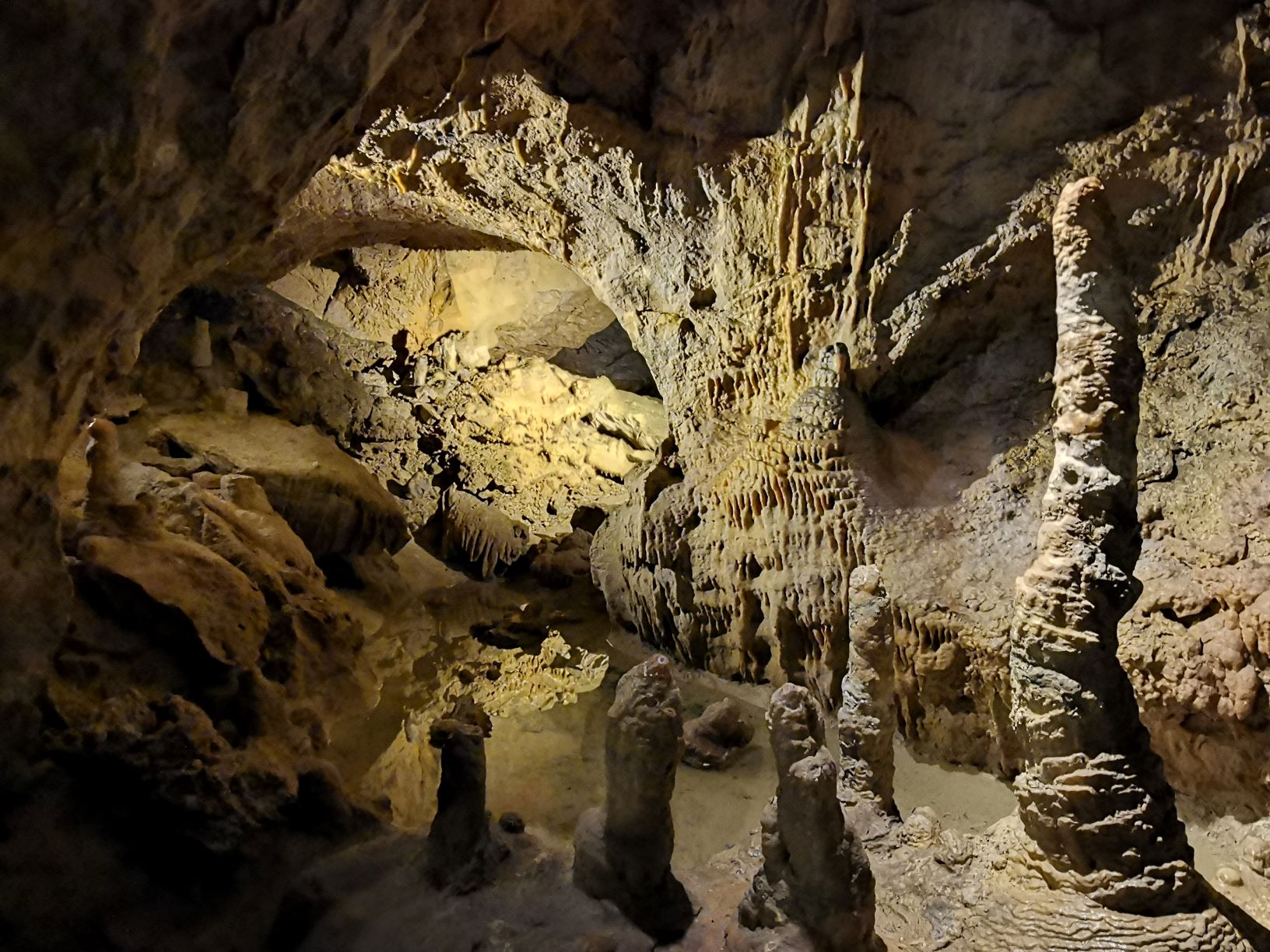 Visiting Matyas Mountain Cave is a real adrenaline bomb for adventurers. The 5.3 km long passage can be explored as a caver in jumpsuits and helmets. I never thought scrambling on rocks would be so enjoyable until I tried it. The 1.5-hour program is led by prepared and experienced cave explorers, who guide visitors from the formation of caves to a world you had never dreamed of before. 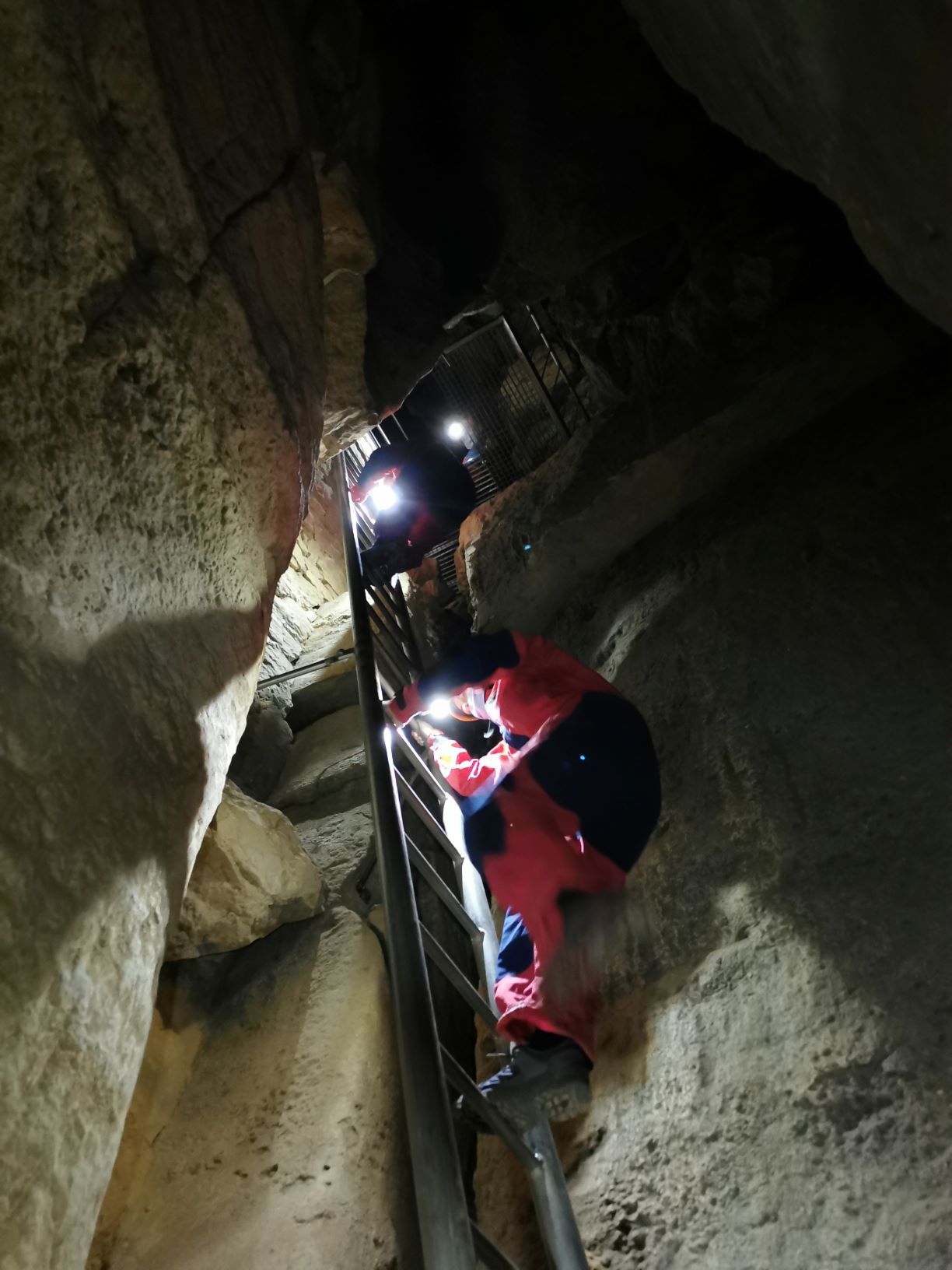 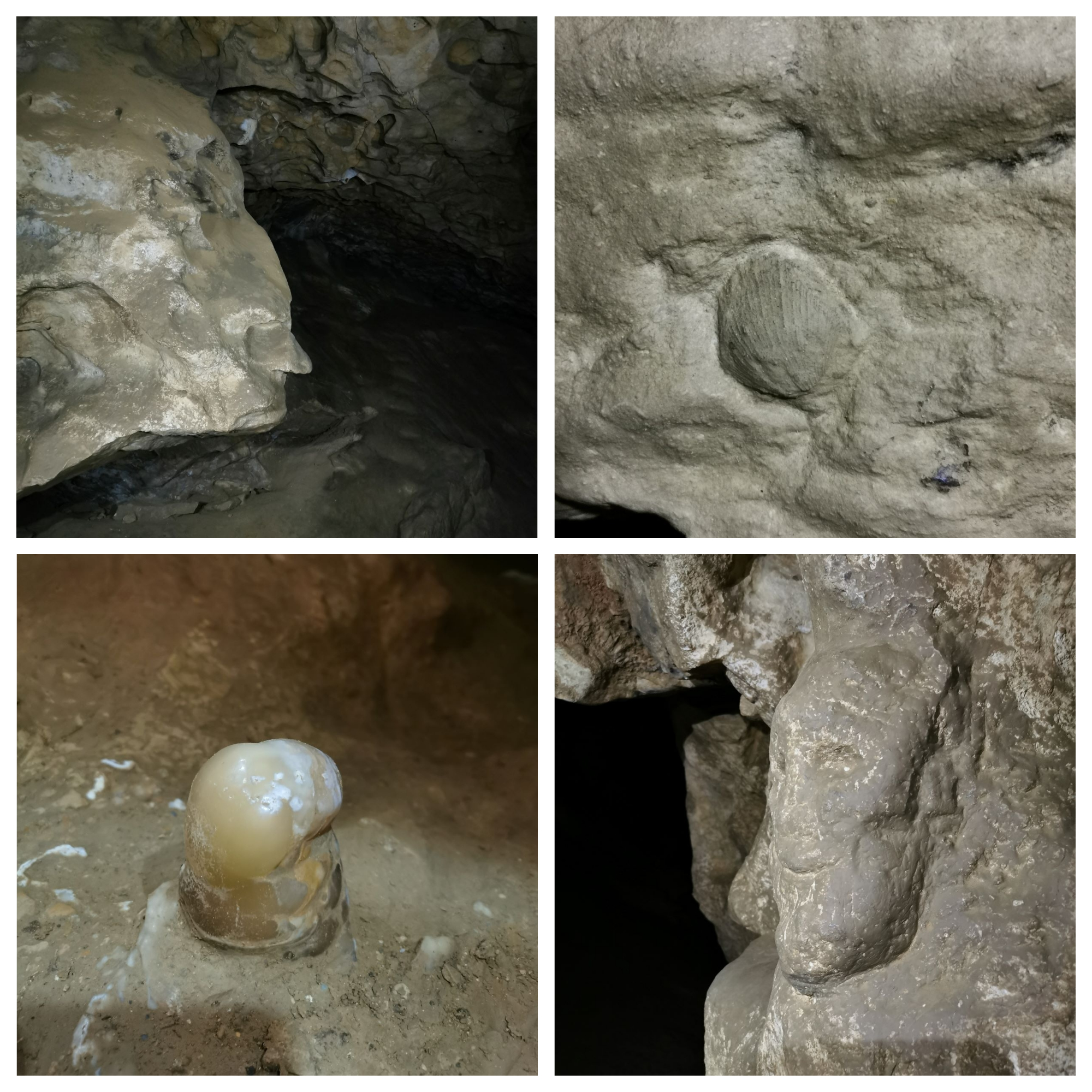 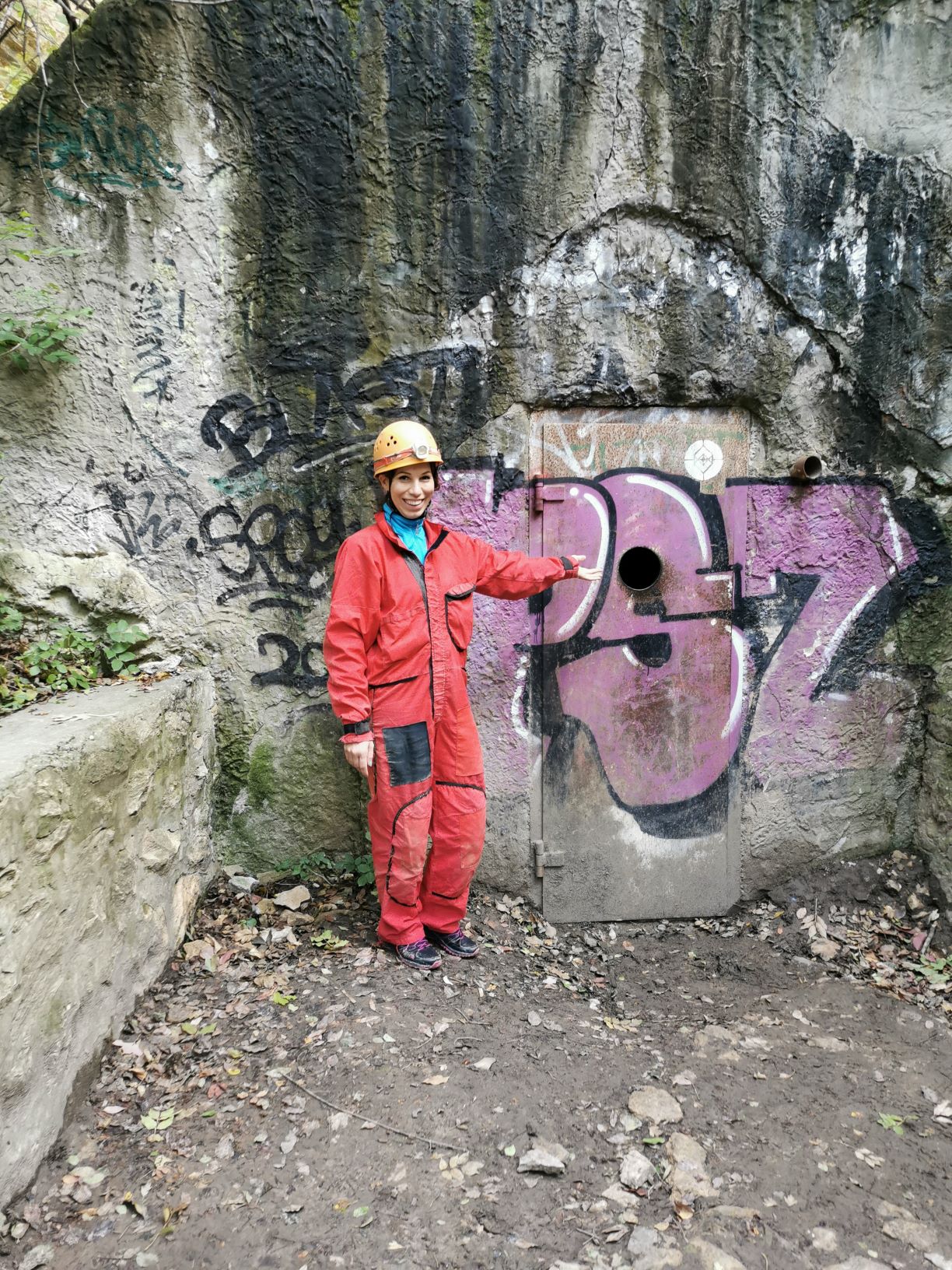 In addition to the spherical niche, you see snail prints from the Eocene era. You experience how deep silence can be when you can even hear your own blink. You get a taste of what it’s like to work as a team and get into a situation where all the problems and the outside world are completely eliminated. All you need to explore the passages of Matyas Mountain Cave is a sporty attitude and a dash of courage while caving equipment is provided at the venue. The program is also available for schoolchildren, elderly ones, people with vision and hearing impairments, as well as people with disabilities. 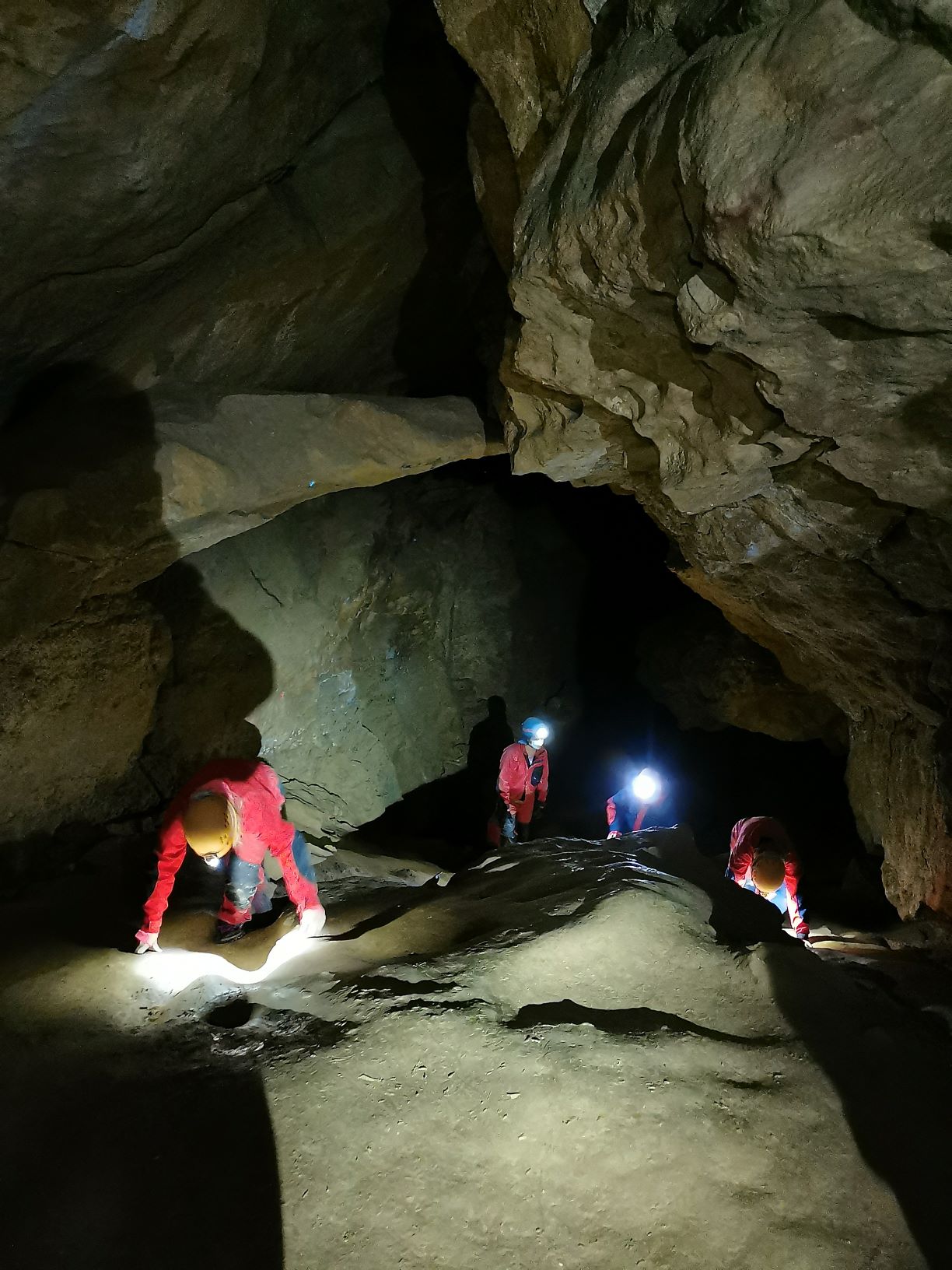 This cave is considered the underground flower garden of Budapest and is the most beautiful of all. Szemlő Mountain Cave was discovered in 1930 by Hubert Kessler and András Futó, and as a result of long research, it was opened to the public in 1986 (you can find out about opening hours and prices HERE). The total length of the cave is 2.2 km, of which a 530 m long section leads on a built-up road. The program starts with a 3D film screening, which gives a true feeling of coolness, that continues in the cave.

The “stone flowers” and “cauliflowers” covering the walls are calcites that offer a stunning view. Pea stones formed by thermal waters can be most intensely observed in this cave, as are the fission-like nature of water corridors. The crevices are relatively narrow, but their height can reach up to 20-25 meters. The cave is accessible and can be visited with a stroller or wheelchair too.

Walk only on paved roads.
Don’t take anything, don’t litter or break the stones.
Don’t scribble on the cave wall, don’t leave any trace of your visit.
Don’t make a fire in a cave as ash leaves marks on the walls forever.
There are bats living in caves, don’t disturb them.
All caves and bats in Hungary are protected.
Take care of the natural values and preserve them!

Among the thermal caves of Budapest, Molnár János Cave is a really special place. It is the only cave in Budapest and Hungary that is completely saturated with water. The fact that the mountain hides not only a hot spring but also a cave remained hidden from sight for a long time. Until the 19th century, the water of the nearby lake was used to operate flour and then gunpowder mills. Then János Molnár found out the water is rich in minerals and has beneficial effects on health. 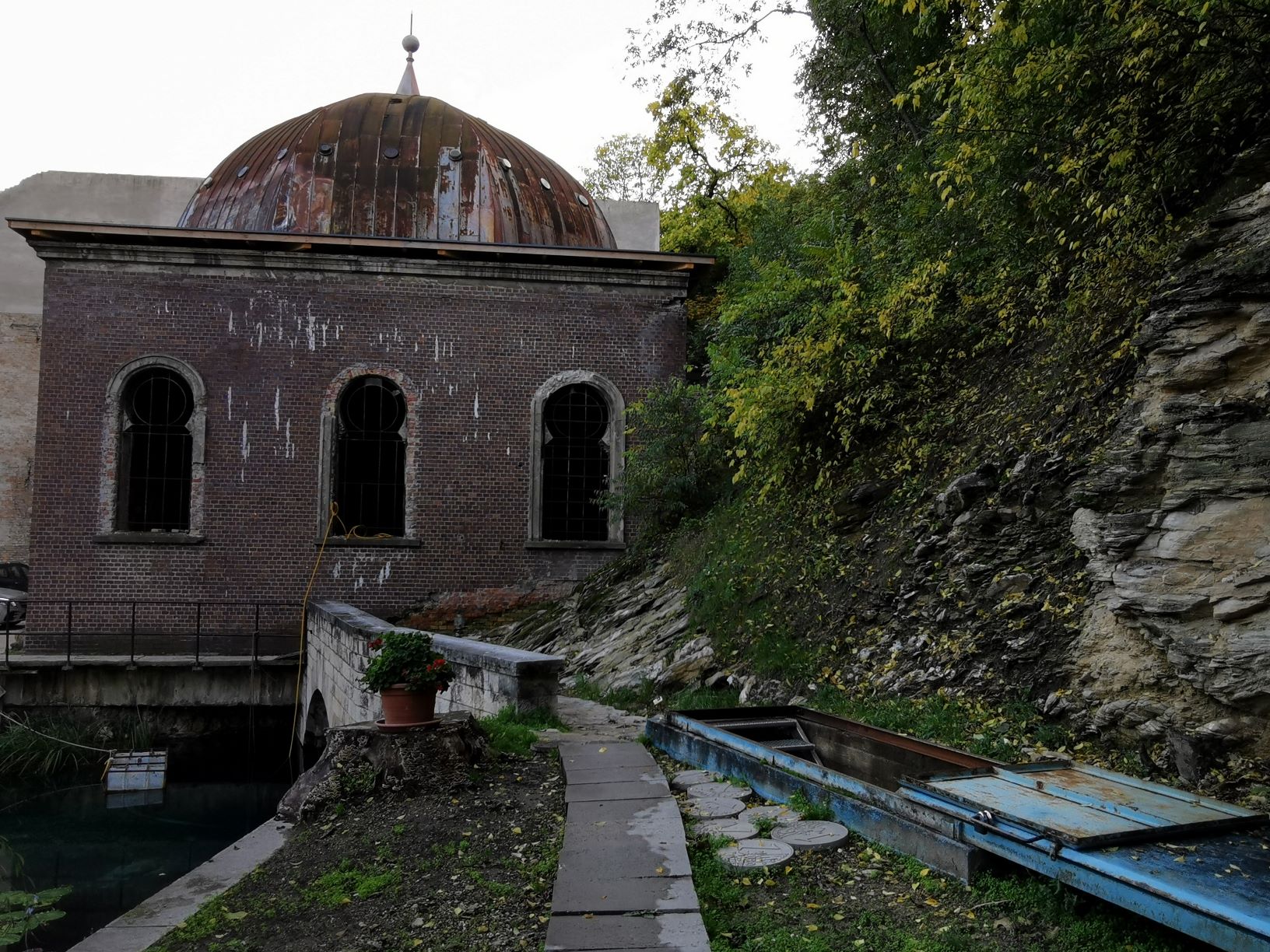 Today, the water serves the water supply of Lukács Thermal Bath but on the other side of the street, you can still see the building of the former Turkish bath, which operated as a public bath in the 1930s. The fact that the thermal water is connected to the karst caves of the Buda Mountains turned out only in 2003. This is when the excavation of the cave began by divers, thanks to which we already know the 8 km length of it. It is believed Molnár-János cave system is much longer than this, but the exploration of the reservoirs continues still to this day. 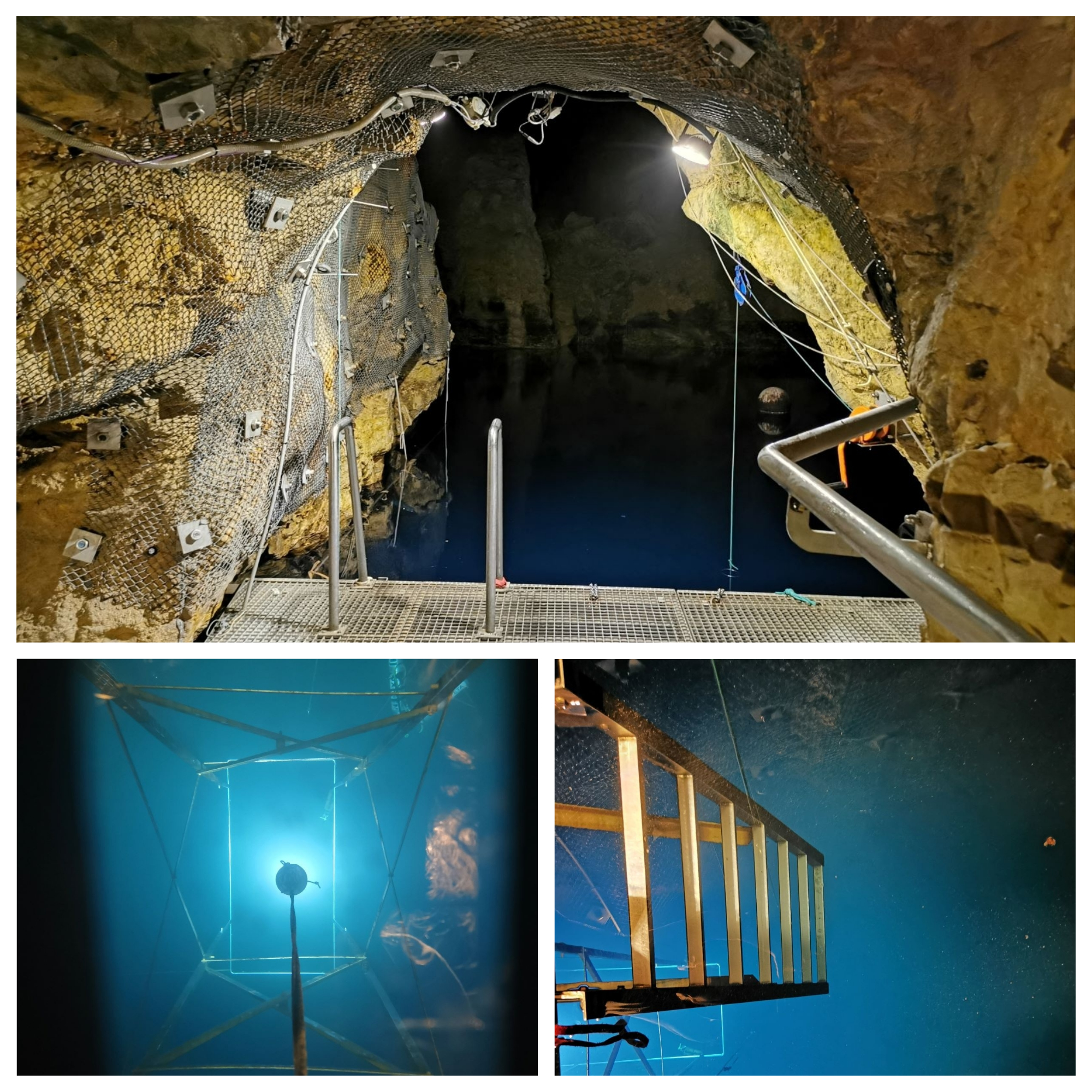 I was very excited about diving in Molnár János Cave. Although I’ve dived in cavities in Mexico (watch the video HERE) but I’ve never tried a double tank and cave diving equipment before. After a short training and with 20 kg extra equipment on my back, I entered the Kessler Room to go down the ladder into the crystal clear turquoise water. 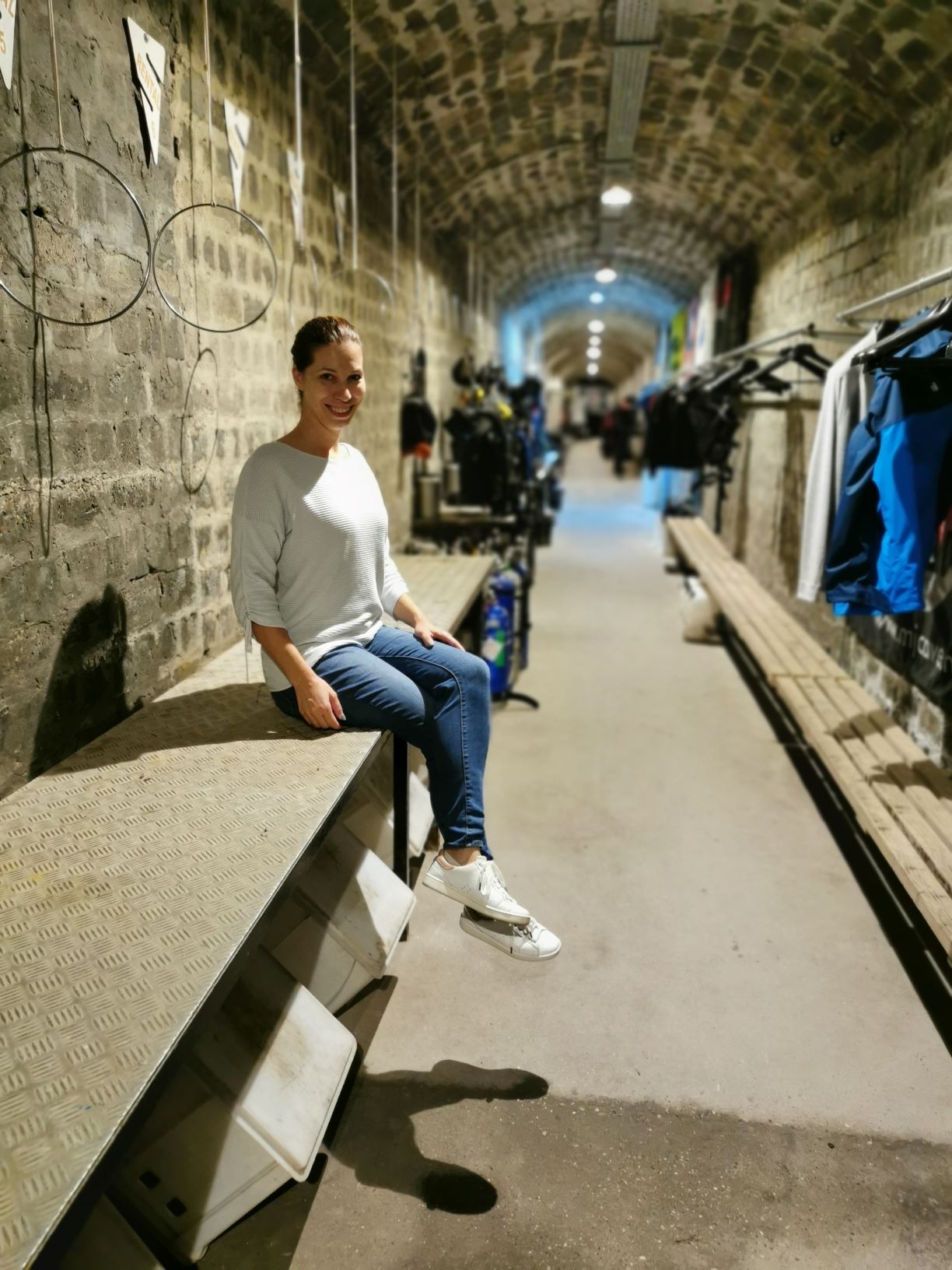 The temperature of the Molnár János Cave is quite pleasant. It’s 28 degrees above 10 meters, while below the temperature is only 20. During the cave diving, we swam along ropes and followed the guide through spectacular halls. It was such a strange experience that I could literally feel the warmth of the heat springs coming from the depths of our skin.  In Molnár János Cave apart from a few blind crabs, I saw “only” stones, but with this diving, a big bucket list dream came true.

Buda Castle is probably known to everyone, while the cave system below is probably less so. But like its surface, its above-ground companion has played a significant role throughout history. The National Bank’s gold reserves were stored here. Later they were bunkers under the Horty era, but a hospital also operated in the rock. The latter was Traveladdict.hu most read articles, you can read it HERE.

The formation of the caves under the castle, as well as the caves described above, is due to the bursting thermal water. The heat sources of 30-35 degrees dissolved the cavities under Dísz Square, Szentháromság Square, Fisherman’s Bastion, which were discovered relatively early in the 13th century. In the holes that collapsed during the well drilling, cellars were initially formed, used for wine storage and storage. 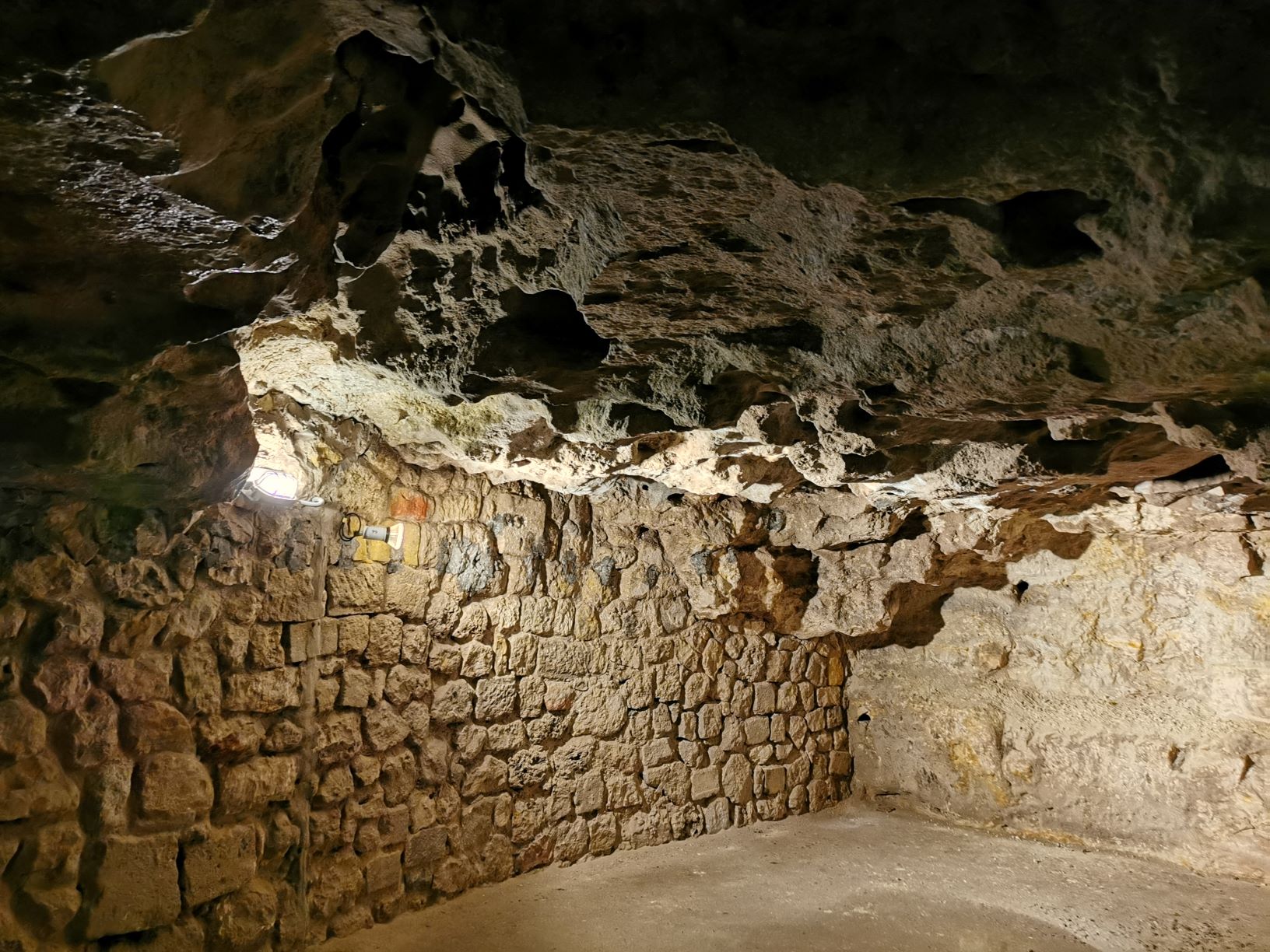 Its labyrinth-like system was only developed before the beginning of World War II, when the cellars were transformed into interrelated systems by carving out the rock walls. Unfortunately, the human intervention did great damages to natural cave formations. Therefore spherical niches and cauldrons dissolved by the thermal water can only be discovered in a few places. From the 5 km long section you can walk 3 km as part of a guided tour. During the tour, you can see many interesting things, like a harem fountain from the Turkish times as well as the secrets of Hilton Hotel.

* Due to pandemic restrictions, caves are currently closed. Check the national parks website for updates before your visit.