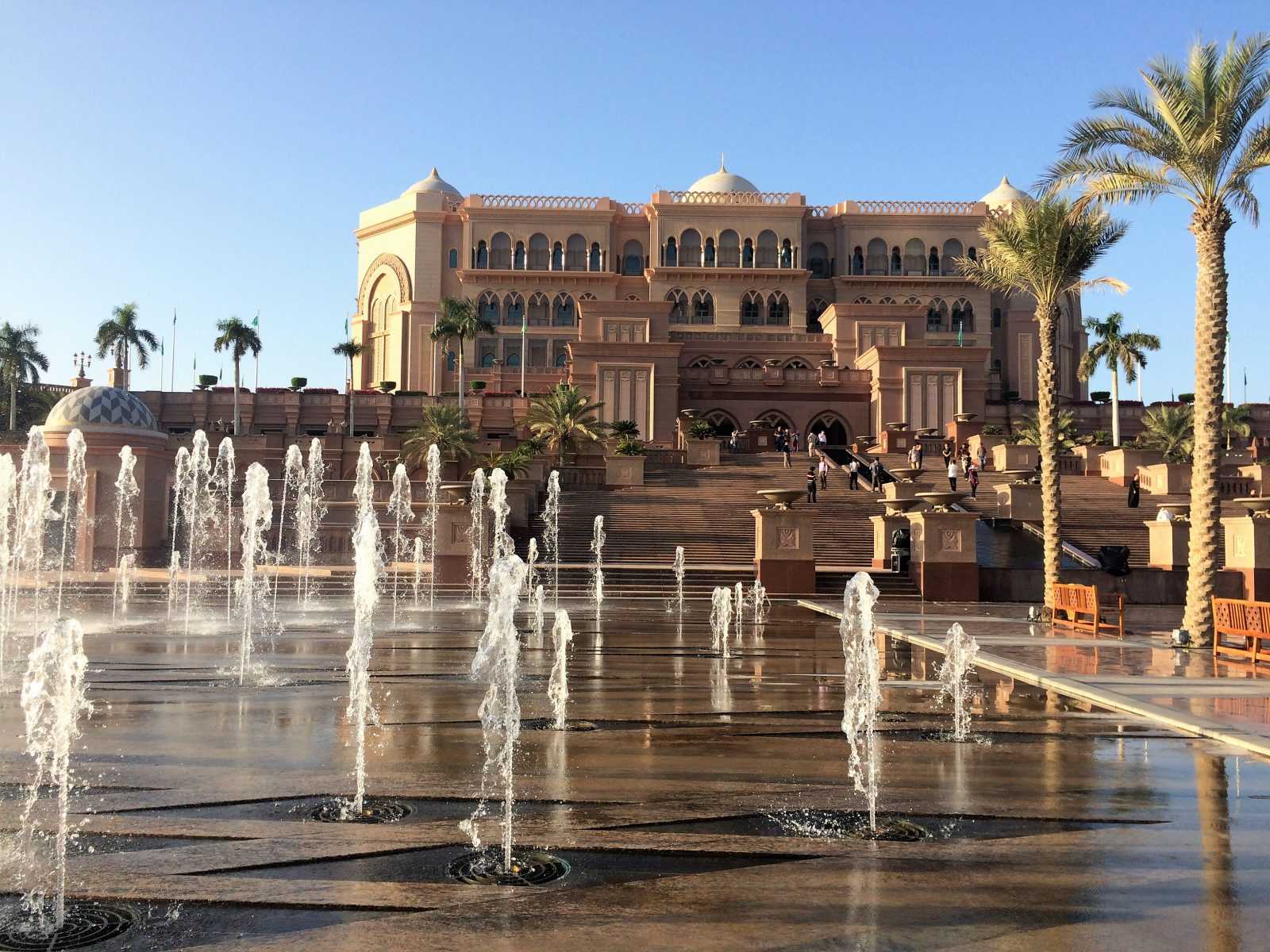 Did you ever think gold could not only be worn as a jewel, but you could take it out of an ATM as an array if you wish to? Or you can even eat it or drink it? In Abu Dhabi, all this can happen and everything that shines is gold. After the gleaming, modern Dubai, I headed to Abu Dhabi for a day because I read that the capital is much more traditional and conservative in terms of Arab traditions than Dubai. I was brought to my attention beforehand, if I wanted to avoid the pungent gazes, I should wear long trousers and shoulder-covering clothes. While in Dubai you can wear short denim shorts and spaghetti-strap vests, in Abu Dhabi you can no longer do so.  But speaking of Arab traditions, it is also worth mentioning the dress code of men, because this is less often mentioned. It is less typical in Dubai, but in Abu Dhabi, most men still prefer traditional wear over western denim+t-shirt combination.

Part of the traditional men’s outfit is the kandura, which is an ankle-length, long-sleeved shroud. It is usually white in color, which gives protection against the sun’s rays, but it is usually worn in beige, lavender and sand yellow colors during the winter. Interestingly, the longer the kandura, the higher the social status it refers to. It does not have a collar, but its long sleeves are often embroidered, which also indicates the title of the wearer. Ghutrah, also known as kufiya, is the headscarf worn by Arab men. Its goal is twofold: to protect the face from the sun and desert sandstorms. In the Emirates, the traditional headscarf is white, but you can also see a red-and-white plaid (tablecloth-like) version, which is more of a Saudi-style outfit. Kufiya can be tied in several ways according to current fashion. To avoid from falling off the head, it is fixed with a black cord, called agal. 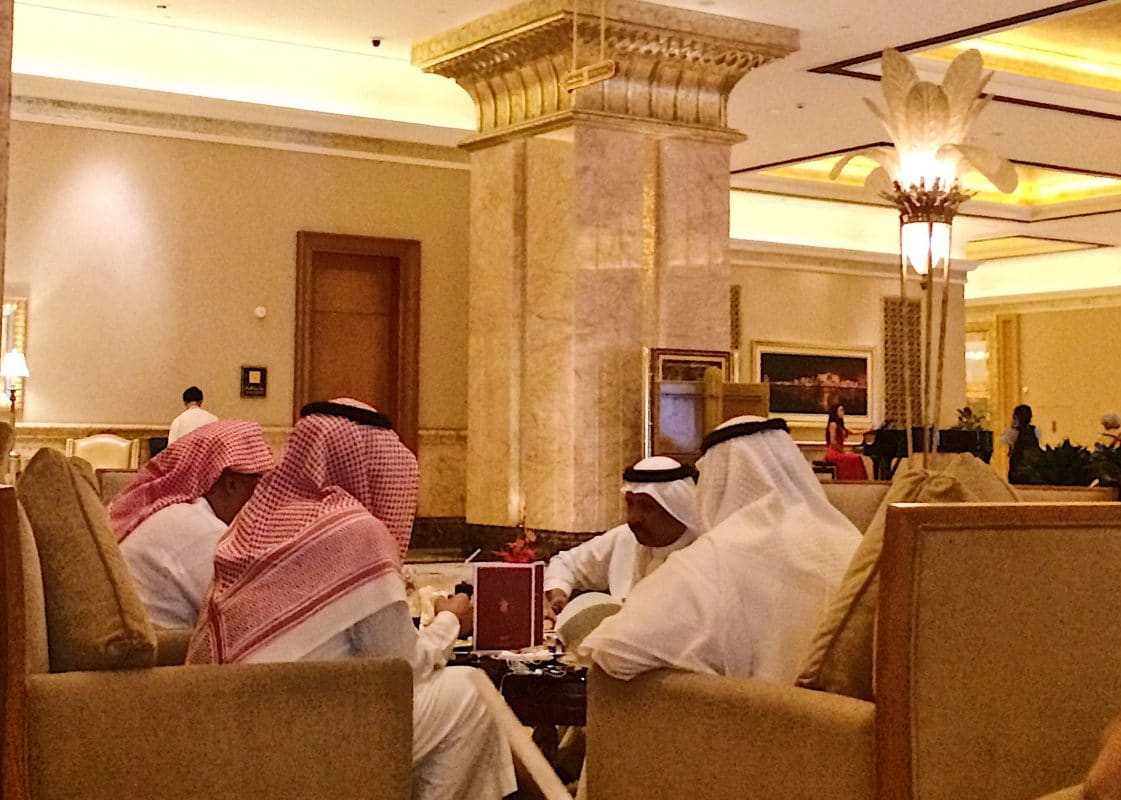 In Abu Dhabi there are two things you shouldn’t miss. The Emirates Palace because of its impressive splendor and the Sheikh Zayed Mosque, which iN 2017, according to the rating of the popular travel site Tripadvisor, has become the second most visited tourist destination in the world. Although one is a luxury hotel and the other is a religious place, one thing is common: if you see a gold decoration, you can be sure it’s not fake gold.

If I have to describe the building in two words, I’d say it’s just perfect. The giant white marble building can be seen from a far distance along the road, where we arrived a few hours before sunset. It is worth timing your visit- which is free for tourists – so that you can admire the mosque in both daytime and evening lights. It’s a monumental building that can welcome 40,000 believers at a time. By this, it is one of the largest religious sites in the Middle East.

The mosque is held by 1096 columns, which top is decorated with palm leaves made of real gold. Moreover, the ornamental decorations are made of gold too. The palm tree in the United Arab Emirates is of great importance, symbolizing survival.  The fruit of the tree, the date, which can live in extreme conditions, was often the only source of food for bedouins besides the camel milk, who lived in the desert for many centuries. The world’s largest hand-knotted carpet (5700 m2) and its chandelier can be found in the Sheikh Zayed Mosque too. The carpet was made by 1,200 people and took 2 months to transport and assemble it. The largest of the seven crystal chandeliers hanging from the mosque is in the main hall. It weighs 12 tons and 40kg of 24-carat gold was used to decorate it. 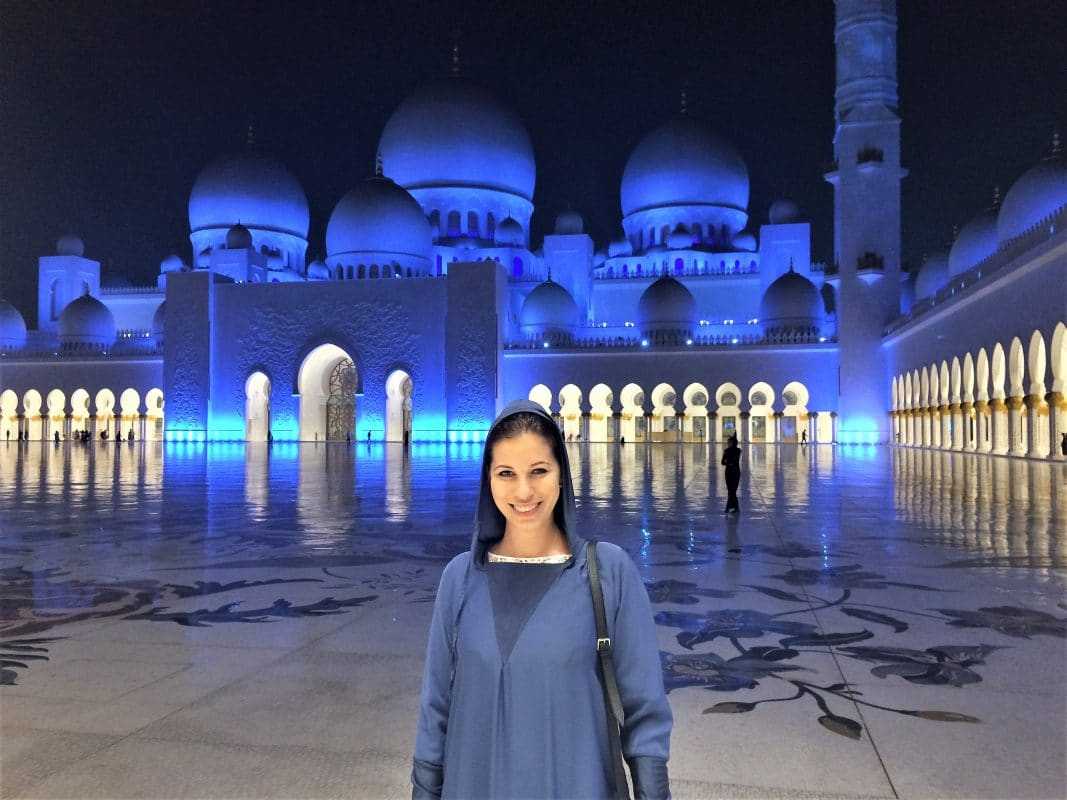 The mihrab, also known as the prayer booth, marks the Kaba in Mecca and the direction of pray. The mihrab is decorated with beautiful gold mosaics. Around it you can read Allah 99 names on the qibla wall in floral motifs. The mosque has 82 domes, the tops of which are also decorated with peaks made of gold. Whether you’re in the day or in the night lights, walking in the courtyard of Sheik Zayed Mosque, you really feel like you’re in the Arabian Tales or at least the Aladdin movie.

As well as hanged for a sheep as a lamb. When it comes to gold, everything is possible at the Emirates Palace. It’s the most expensive luxury hotel in the country, with the cost of construction alone $3 billion. This ranks third globally after Las Vegas (The Cosmopolitan of Las Vegas) and Singapore (Marina Bay Sands).  The hotel staff amounts to 2,600 while as a guest you can enjoy the luxury from $5,989 to $12,251 per night.

It is very sympathetic they allow tourists for free sightseeing in the palace, unlike the Burj Al Arab in Dubai, where they did not even let us go in. We couldn’t walk into the suites, obviously, but seeing the pictures below, you can imagine how luxurious they can be. The Emirates Palace belongs to the Kempinski Chain Hotel and serves as a guest palace for the government based in Abu Dhabi. There are 22 three-room suites for diplomacy escorts, while there are six “residences” on the top floor, which are only available to members of the ruling noble families.

During our visit, we also had the opportunity to sample dates, of which we learned there are 120 different types, which makes the United Arab Emirates the 6th largest exporter of dates in the world. The ancient palm motif can be found at the Emirates Palace in 6000 m2 everywhere in 22-carat gold leaves. An additional extra thing in the hotel is to drink a gold coffee. It costs about 4000 Ft and you can enjoy the 24-carat gold powder on its top, accompanied by some cookies or macaron. The popularity of the service is indicated by the fact that approximately 5 kg of gold dust is consumed each year for the coffees served. If someone decides to take the gold home instead of eating and drinking it, he could do it in Abu Dhabi. The luxury hotel opened as the world’s first gold-publishing ATM machine in 2010 and reportedly closed in 2017, though I haven’t found official information about the closure. Maybe I should check it with my own eyes? Maybe… But even if I caught the goldfish, gold probably wouldn’t be among my three wishes.